I want to straight up say that Karnage Chronicles is the best VR game that I have played on Oculus Rift thus far. Of course, I have not owned one for but a few months, yet this game demonstrates precisely what my expectations were when I first put on a headset. To my surprise, it is still (only) an Early Access game!

Admittedly, I could not say what the story is about. I largely ignored the slow-speaking sage who unlocks the doors to the dungeons and item shop, wondering when I was going to fight some stuff. After all, I had grown accustomed to VR depending upon interactive movies, on-rails shooters, and games that limit movement to 45 degree turns. It is possible here to turn 45-90 degrees at a time or teleport a short distance to move, but I prefer, where possible, full movement. What I did not expect during my first session, however, was to suffer from nausea, a common complaint about VR that had not been an obstacle for me until now. I was working up a sweat, which might have had more to do with the physical nature of the game than my queasiness, and my stomach felt like a bubble was floating to its top. I tweeted about this, and the attentive developers at Nordic Trolls were on the case:

There is a slight problem with spinning around the room center using thumb stick movement. Instead of spinning on the spot where you are actually standing, it will spin around the actual center of your room-setup. Apologies for this, we will find a way to fix it 🤔

They asked about my specs, and I assured them that they were not the problem. I also mention that I had been running on eight hours of sleep through two days, so exerting myself further while already being exhausted might have exacerbated my fatigue. The next day, not only was my equilibrium restored, but I figured out how to take photos—a struggle with my Oculus that has been frustrating since I have owned it. 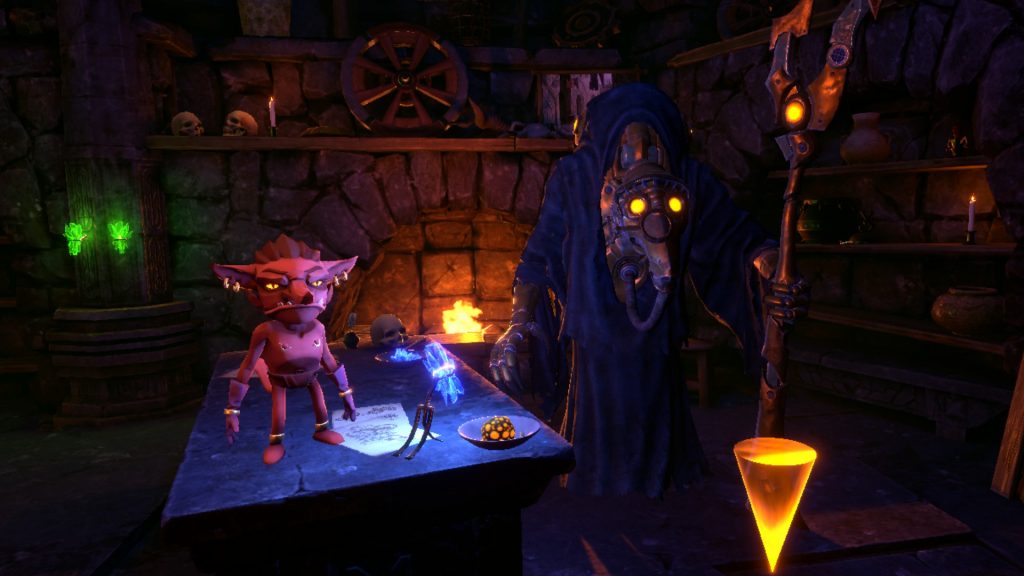 Perhaps my coverage of VR games will include more screenshots such as these!

As of this writing, there are only two classes: warrior and archer, though Nordic Trolls is promising two additional classes for the final version of the game. I have three words in response to this: mage class, please. That said, for this preview, I stay true to my penchant for finesse, by selecting the archer, looking forward to testing my skills in terms of accuracy. Karnage Chronicles shows no pity in this regard, for I miss my intended targets ranging from stationary pottery to live enemies. For the former, my excuses are few, though I admit that the arc on the arrows requires some adaptation; for the latter, well, enemies such as goblins will actively spin or dodge projectiles as if doing the limbo. This both frustrates and pleases me, that the AI poses some challenge. Even when I “go rogue,” and switch to a short sword and shield combo, enemies fight back with ferocity. 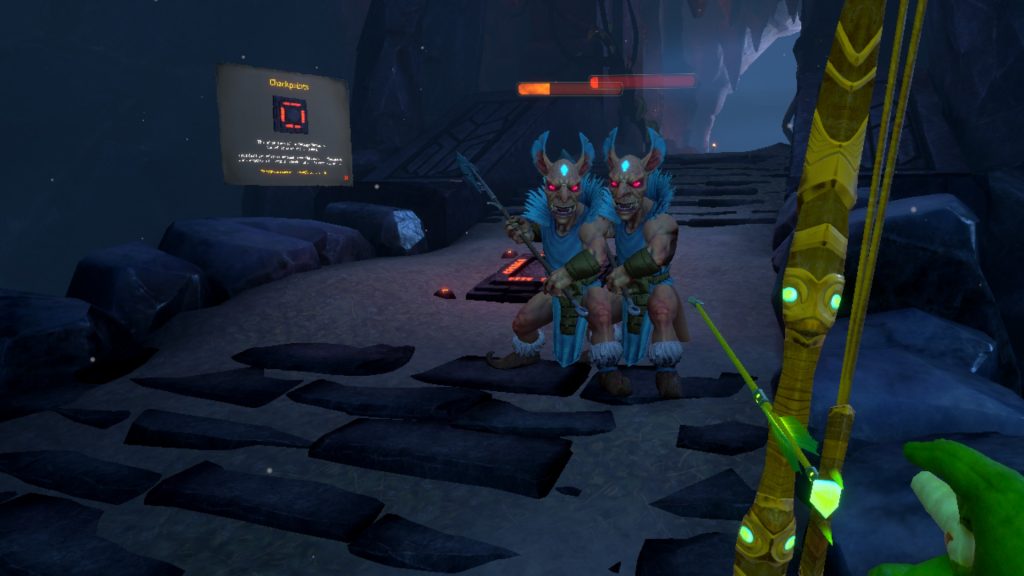 Archers should be prepared to kite and backpedal. These dudes will dodge headshots!

Indeed, Karnage Chronicles reminds me of what Nintendo sought to accomplish with the motion controls, twelve years removed. If I wanted to hit a target with my bow and arrow, I would have to nock the arrow with my right hand and aim with my left. I recorded my second session with the intention of making a GUG-patented QuickScope out of it, but the game’s ambiance drowned me out on the mic. Still, I include it here in case readers (and viewers!) wish to gain insight on how much space will be needed in the real-life VR room, as well as the sheer physical effort necessary to fight. I also rolled a warrior to do a test video, shield in left hand, sword in the right. Note that Nordic Trolls thought of lefties too, and these configurations can be swapped; Legend of Zelda fans might even want to try a Link-style playthrough simply to test themselves. With the archer, it is possible to dual-wield short swords for style points

Upgrades to armor and weapons can be found in dungeons and stores. Health is restored by consuming food or potions; some potions have the added effect of granting a damage/reduction buff. Enemies are a little on the bullet sponge side of things, but that could be attributed to me not upgrading my gear. Perhaps the next step in VR is to measure damage based upon physics such as how hard one swings their Oculus Touches or how tight one nocks their bow before firing an arrow.

Powered by the Unreal Engine 4, Karnage Chronicles is also one of the better-looking games on VR. It is one thing for me to critique the aesthetic of Torchlight as Diablo-lite, but in navigable 3D space, I am impressed. I have only played through the first of three dungeons, so I look forward to what else the game has to offer.

It is hard for me to think of reasons why one might wait to purchase Karnage Chronicles until after it exits Early Access. The game did crash once during my first take recording, and that is included below. Beyond that hiccup, I would love to see Nordic Trolls gain the support through purchases to add the polish they intend on integrating into the game. Seriously, if you own an Oculus or Vive, there is little reason to wait.