All my life, I’ve loved cooperative modes in games. To this day, I’m dismayed when I pick up a game with multiplayer, only to find out that it’s only competitive. Don’t get me wrong, I love a good friendly rivalry among friends as much as anyone, but there’s a special joy in working with friends to accomplish one goal. And while I’ve recently gotten to relive my childhood co-op memories with releases like Super Mario 3D World + Bowser’s Fury and the Overcooked series, it’s been a long time since I’ve really gotten to dedicate some time to a true co-op experience. So when KeyWe, a cooperative action puzzler, crossed the GUG radar, I knew I had to give it a shot.

To me, part of what makes co-op gaming so much fun is the fact that you know neither player could accomplish this task on their own. Good co-op games make it abundantly clear that you’ll need to communicate well and use your skills to the best of your ability together to make it to the end. KeyWe embraces this concept with a creative flair that I envy. What better way to remind the player that they need a buddy than by making them a tiny kiwi bird entrusted with running a telegraph office?

I have no idea how developer Stonewheat & Sons arrived at this concept, but I love it. In fact, the game’s cute factor was one of the reasons I gravitated toward it. Who wouldn’t want to play as two tiny little birds that use their butts to push telegraph buttons? That’s amazing. The entire time I played KeyWe with my co-op partner Shelley, the game never let us forget that we’re two tiny birds in a great big world. Our kiwis, Jeff and Debra, were barely the size of the buttons and switches we were operating, and when we picked up a sticker to place on a package, it was nearly the size of the back half of the bird. 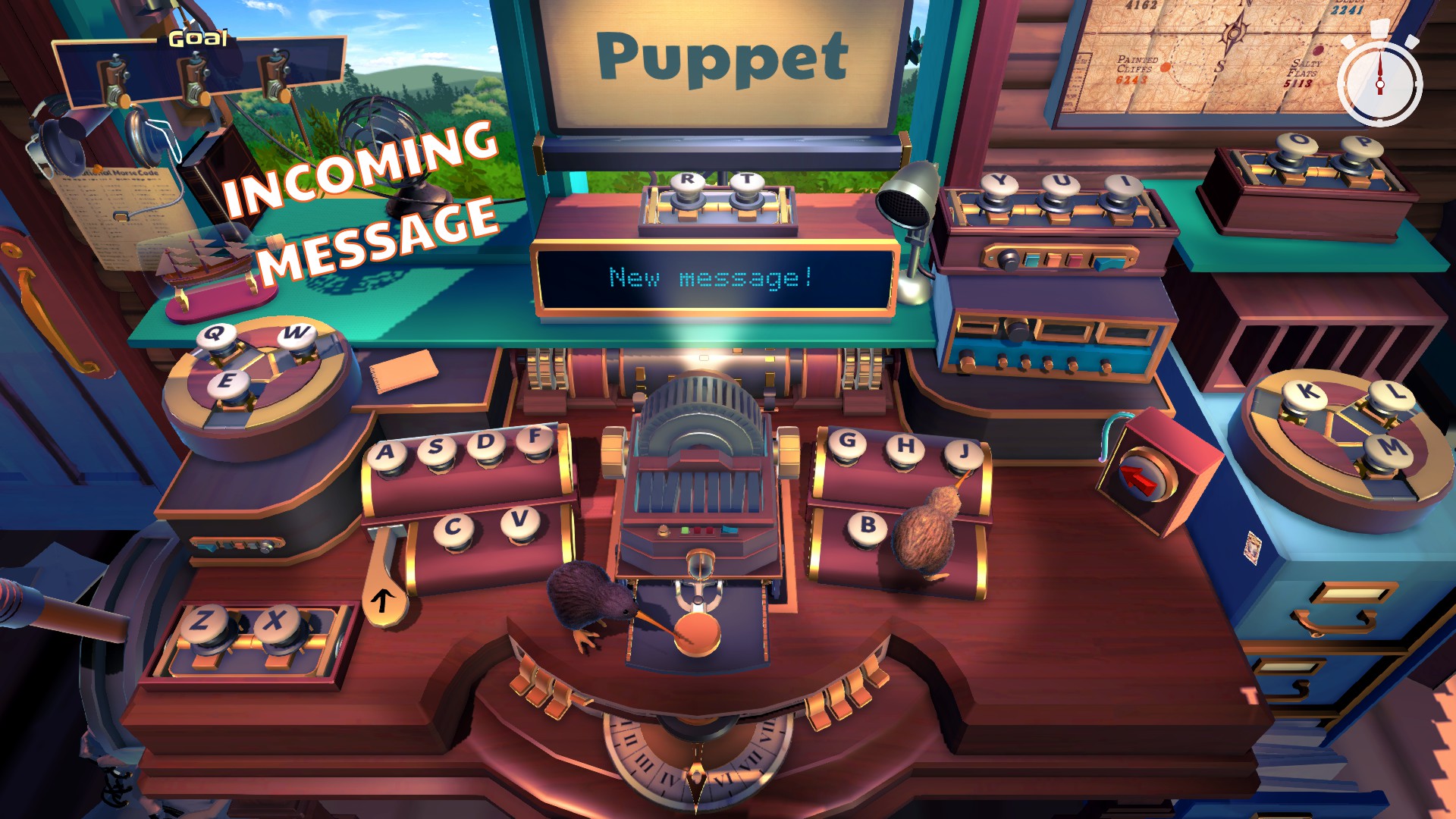 But as I came to find out, there’s a lot more to this game than just looking adorable. KeyWe is a minigame collection of sorts, with six regular games called “regular shifts” and two extra modes called “overtime shifts.” You’ll start your journey simply enough, by transcribing messages one letter at a time into a (relatively) gigantic telegraph machine. You and your partner will be hopping all over creation bopping your butt onto buttons as fast as possible. But eventually, your responsibilities will evolve to include reading letters attached to packages in order to determine what stickers and postal codes you need to apply to said package, working with a friendly octopus named Zoey to sort packages and letters, and transcribing whole messages using scraps of paper that have been scattered around the office. Eventually you’ll even be fighting off creeping kudzu as it attacks the telegraph machine, and rescuing packages and letters from a flooded basement.

The goal of the regular shifts is to meet your quota of deliveries in the fastest time possible. Depending on your time, you’ll earn a bronze, silver, or gold medal and a proportional amount of tickets to spend on new outfits for your kiwi (adding even more to the aww factor.) The overtime shifts, on the other hand, are score chasers. The two available in the demo centered around feeding the post office’s team of cassowaries and sorting packages as they ran along two conveyor belts. The regular shifts are stressful, yes, but the overtime modes are downright hectic. In the regular shifts, you’re only racing against yourself to do a task in a given amount of time. In these overtime shifts, it doesn’t matter how fast or slow you go, the cassowaries will get hungry and the packages will keep rolling. I honestly found these modes to be the most fun to play with a friend. Nothing will beat the feeling of us both realizing that a cassowary is about to have a conniption and booking our birds over there to solve the problem. 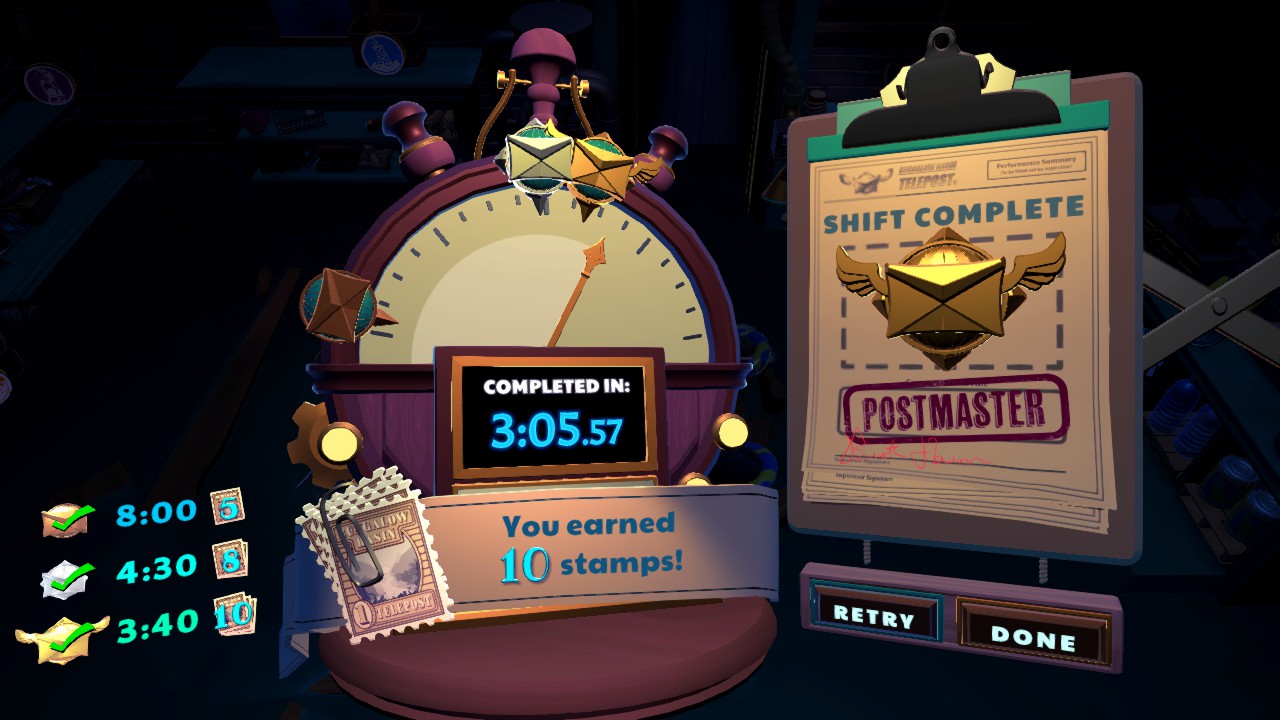 I was honestly surprised at how much fun it was to work with Shelley to nail the best time we could. We found ourselves discussing strategies to optimize our telegraph output and perfecting said strategies with every subsequent play. Combine this with the fact that no game lasts longer than 5 minutes, and you’ve got a fast-paced and replayable experience that keeps you coming back for “one more run.” Shelley and I both agreed that it’ll be fascinating to watch speedrunners get their hands on this game.

I do have to mention that there is a single-player option, and in the interest of fairness, I gave it a shot. You’re able to either control both kiwis at the same time with both control sticks or hot-swap between them. However, it’s abundantly clear that KeyWe was designed to be a co-op experience. With either control method, playing by yourself makes what was a fun and frantic game of teamwork into a frustrating and irritating game of micromanagement that reminds you of the fact that it’s actually impossible to truly multitask. In other words, don’t bother with single player. 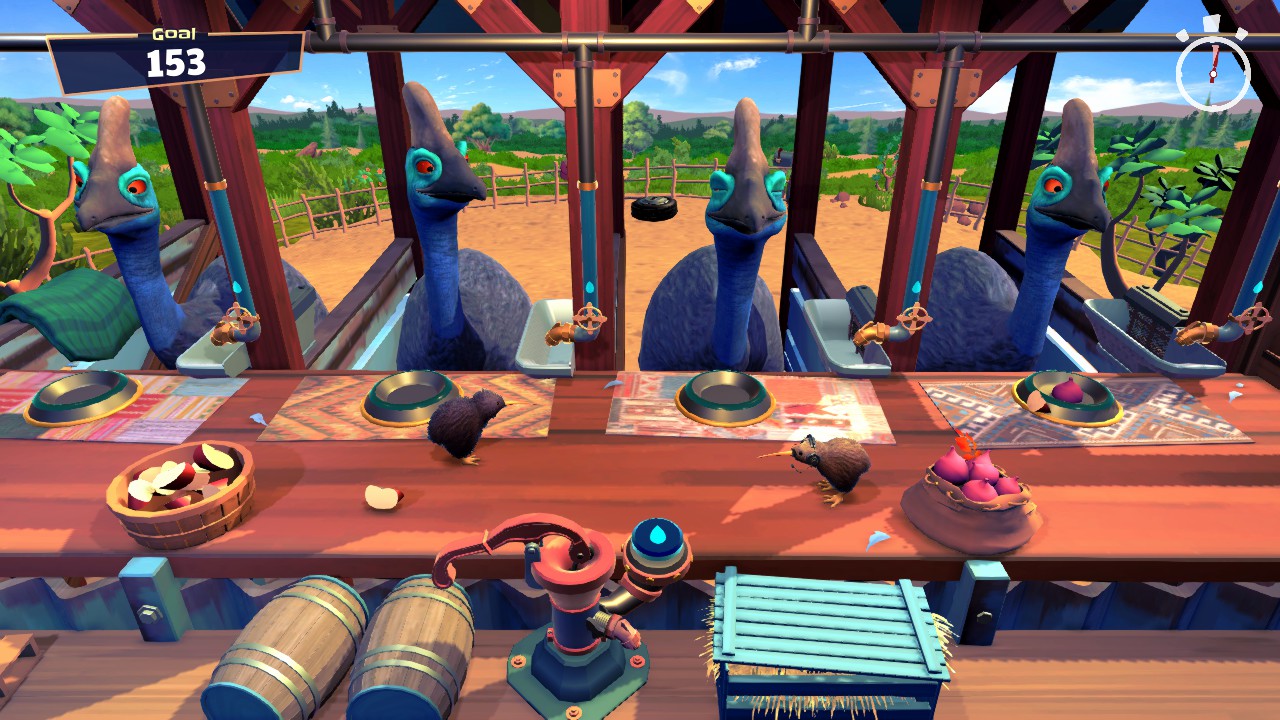 Understandably, there’s not a ton of content in this preview, so I have no way of knowing how well all these games will be fleshed out in the full release. I did see some hints of things like seasons in the preview, so perhaps the minigames will run on a rotation throughout the year, which would give players an incentive to check in from time to time. The thing to keep in mind if you’re interested in purchasing KeyWe is the fact that it is, at its heart, a minigame collection. From what I can tell, there’s no campaign or story to speak of. You’ll be playing the same games over and over to achieve the best score you can. But the key thing is, every time we played these games, we had fun. KeyWe nails that experience and keeps it fun all the way through.

Shelley and I played for about 2.5 hours together and enjoyed the whole time. However, at least from what I could see, if the developers don’t put in the effort to keep the game fresh, the content here could grow stale once you’ve really nailed down your strategies. There’s not a lot of randomness to the games, meaning that once you’ve perfected your technique, you’ll likely get a gold each and every time. If my hypothesis on seasons and game rotations is correct, this won’t be a problem, but that remains to be seen. 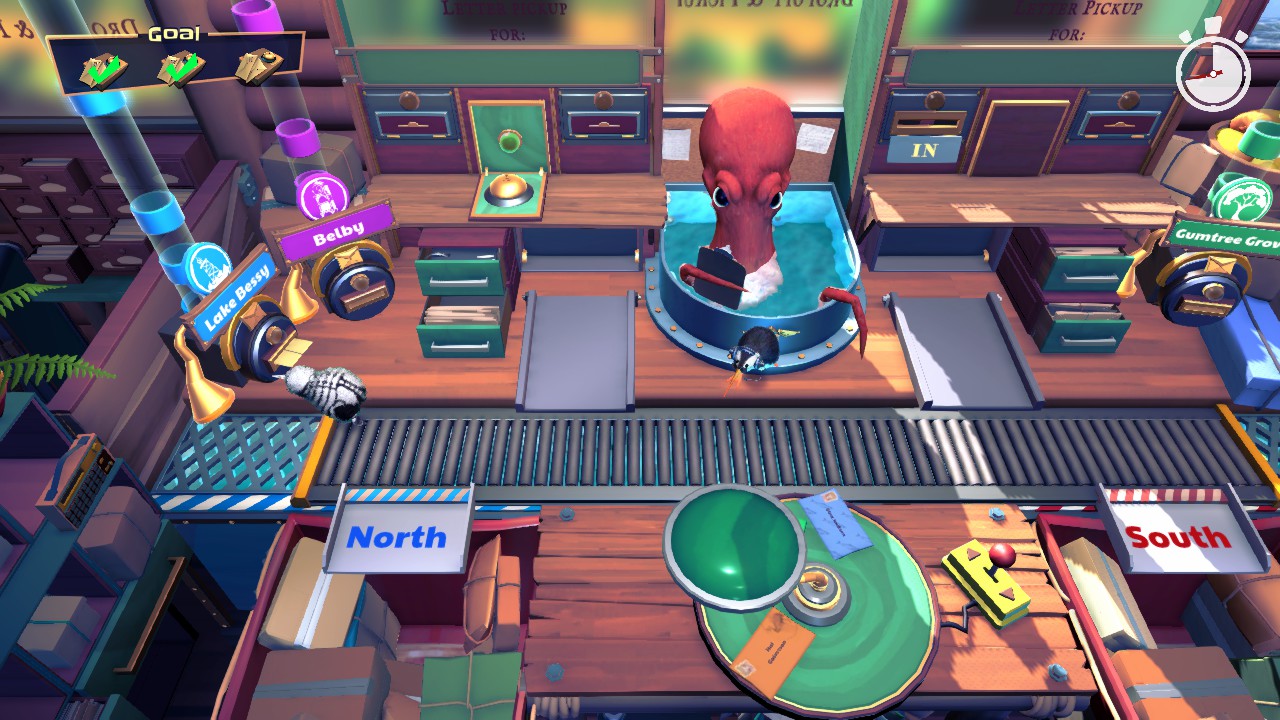 The game won’t be released until August 31, and there hasn’t been any sort of price announced as of yet. But depending on what the final price is, I highly recommend KeyWe to anyone who’s got a buddy and is looking for a quick score-chasing experience. Stonewheat & Sons has nailed a fun, fast-paced, and engaging experience that encourages replays without feeling like a padded or needlessly bloated experience.

And honestly? It’s worth a play just for the kiwi costumes alone.