The story of King Arthur has been iterated on countless times over. We have movies such as The Sword in the Stone and two movies that featured Clive Owen and Charlie Hunnam. In the television realm, there was a cartoon I watched as a child that was called King Arthur and the Knights of Justice. Lastly, there is a beat ’em up that comes to mind called Knights of the Round in the video game realm. This legendary story exists in every medium, and how you want to consume it is up to you.

King Arthur: A Knight’s Tale is an early access release from developer NeocoreGames that puts a dark spin on the story, with a mix of dungeon crawling and tactical combat.  Despite following specific directions in the PR email, I was somehow playing a broken build in which I couldn’t complete the tutorial level. I was writing this preview, ready to express my frustrations, but all of that changed when an update went live on launch day. My experience was then much better, and has me looking forward to playing more when the game sees an official release.

In this version of the tale, You will not be playing as the man himself. Resurrected by the Lady of the Lake after nearly killing Arthur and losing, you are Sir Mordrid and find yourself in Avalon. In search of Arthur, Mordrid aims to look for answers and form a new alliance with old allies.  With greater forces at play in this world, you’ll face off against undead creatures and work to restore Camelot and the round table. 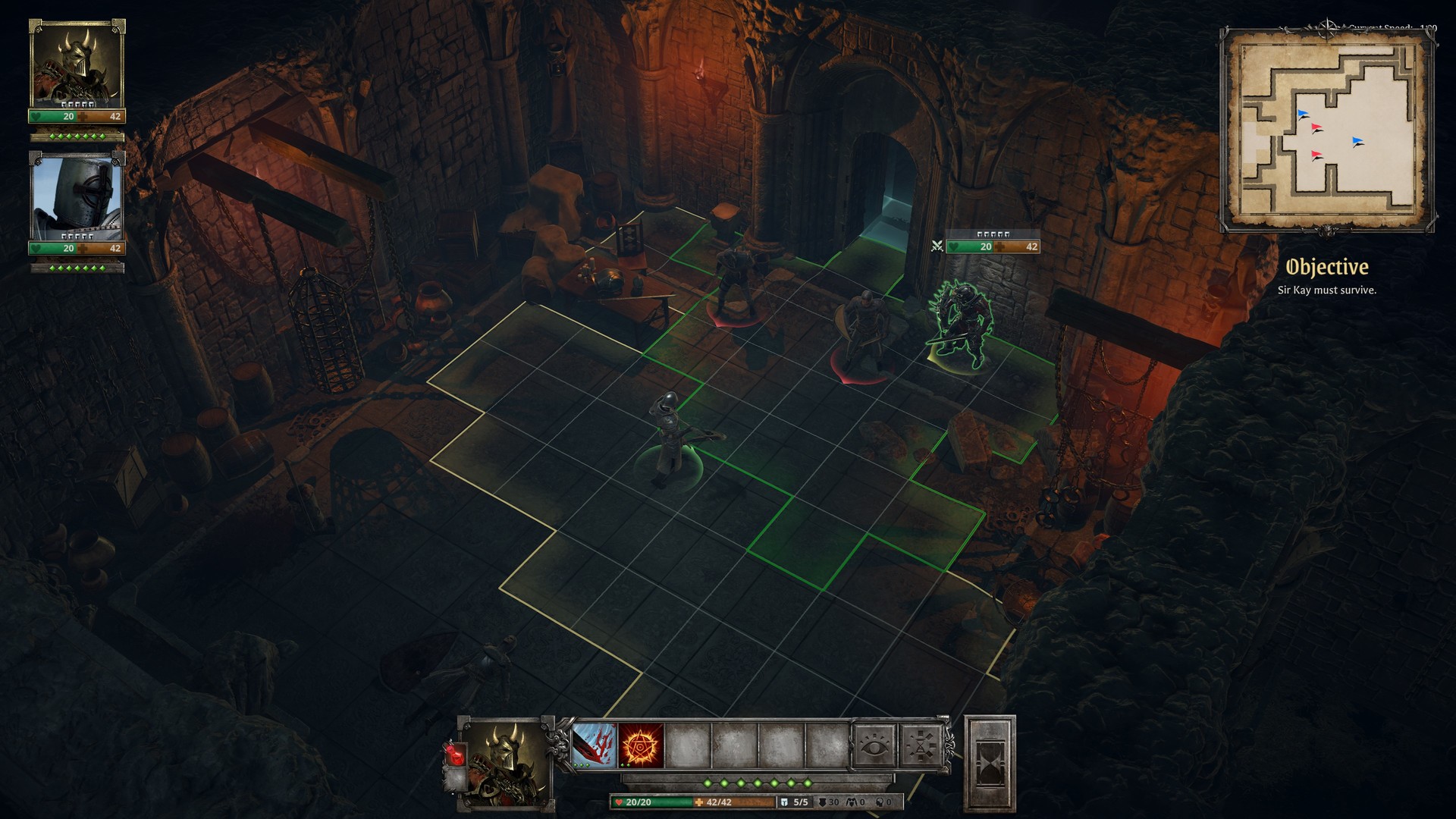 The combat featured in this game is much like Empire of Sin, Fort Triumph, and those before it. After reviewing many games in this genre, I don’t have anything new to say about its gameplay. However, I enjoy how some scenarios let the player choose how and where they want to deploy units. The added dungeon crawler elements improve upon that feature, allowing them to enter a room and decide where and how they want to initiate the encounter. I appreciate how the developers have blended the two genres in this manner.

A few factors drive the dungeon crawler aspect. First, you have a map to walk around in, instead of a small battle scenario. Second and most importantly, exploring the map allows you to find loot, which comes in resources and equipment. Take notice that you can’t equip the new gear until you complete the mission, though I don’t consider it a problem. Lastly, as I mentioned above, you can approach some encounters from different angles, which ultimately adds another layer to the experience. 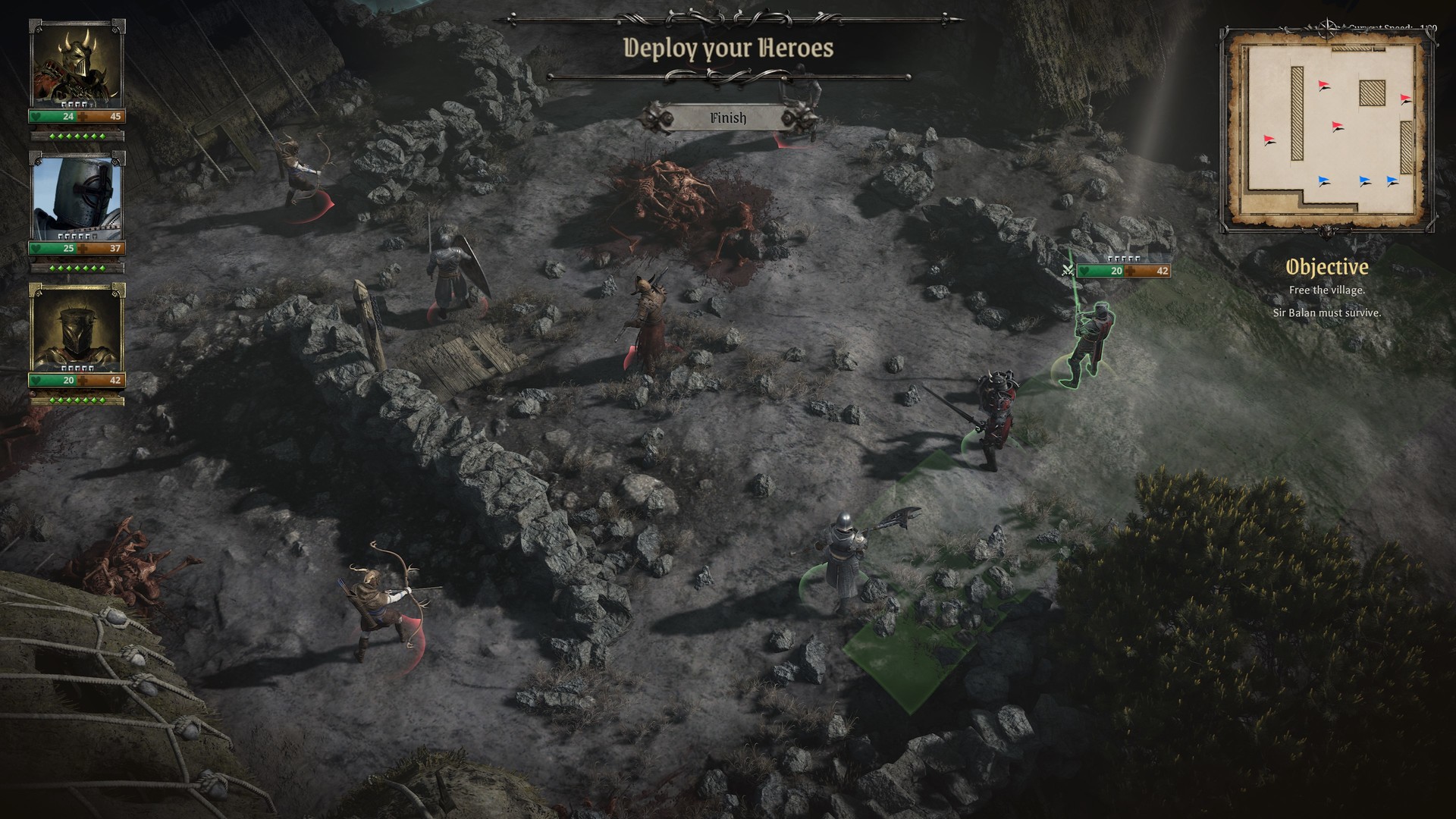 The first impression on combat can be lacking, because you start with two characters that specialize in melee. Using cover mechanics feels like it doesn’t make sense at first, but I found it great for ambushing and flanking enemies. I started to feel more comfortable when I gained some ranged characters in my party and was pleased to see that they play more of a support role. Coming up with tactics on how those characters can support the melee classes is the most rewarding part of the gameplay. I applaud the developers for making this overdone combat feel fresh.

The early access build offers two story missions, a handful of sidequests, and a small number of heroes. It adds up to a 3-4 hour showcase of what you’ll experience in the full game. To my surprise, some mechanics bear a strong resemblance to Darkest Dungeon. In between missions, Camelot and Kingstone’s locations have buildable and upgradable structures that greatly aid your quest. Places like the Hospice and Cathedral will heal damaging ailments and let your party members rest. Permadeath is a factor as well, so you’ll want to keep your party members’ health in consideration. Also, “Classic” and “Rogue-like” modes are available when starting a new game, depending on how you want to play. 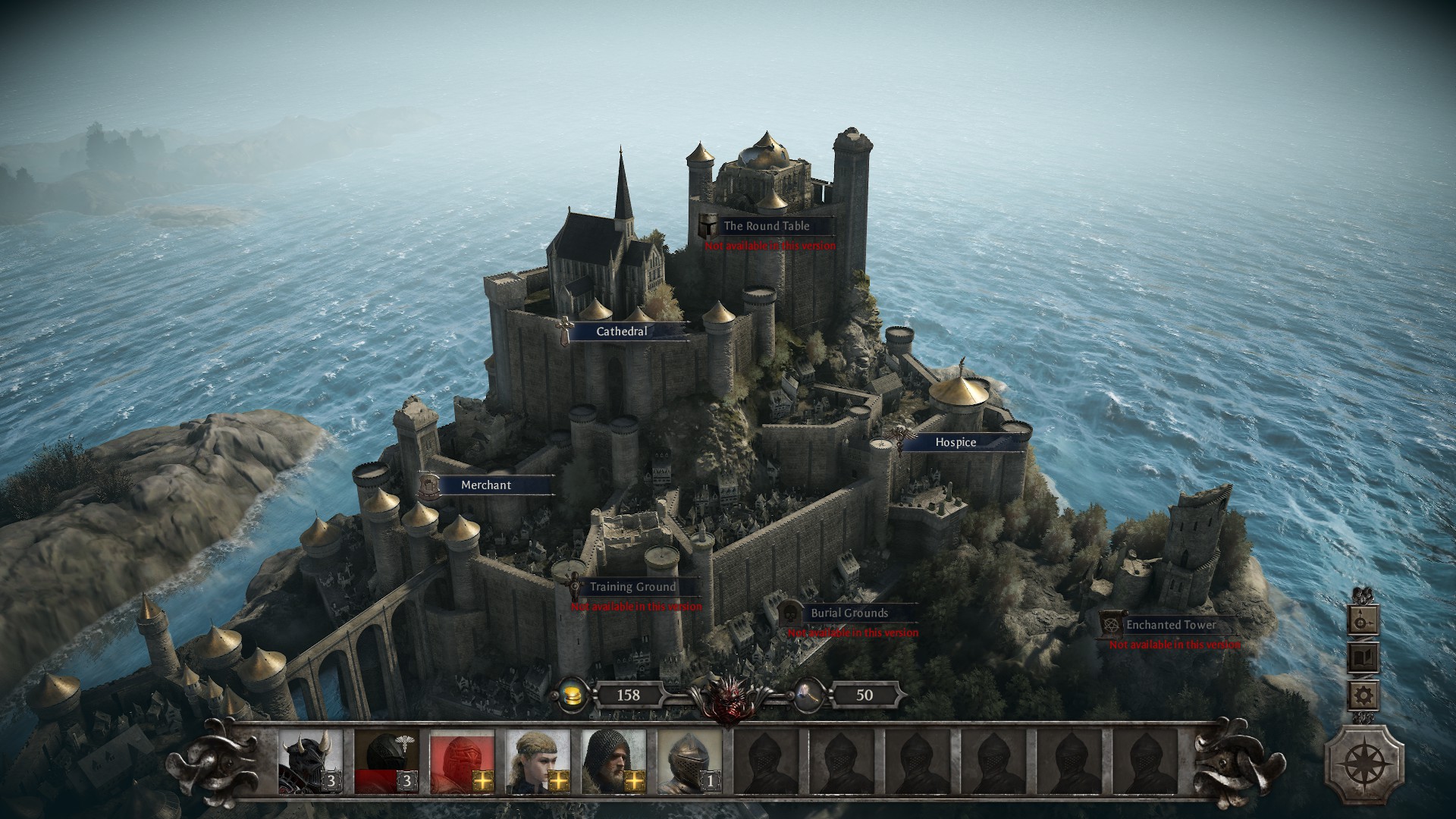 Like others before it, KA:AKT also has a morality system. However, there are varying degrees more akin to Dungeons & Dragons than a simple good or evil. Your dialogue choices and each decision you make will affect how you shape your kingdom and whether individual party members will stick around. While many games drop the ball in this area, it feels like the alignment of Sir Mordrid will affect how the story moves forward. It seems he can have one of two goals: find King Arthur and restore the kingdom with its rightful ruler, or take the throne, build your round table, and rule the kingdom yourself. I can’t see sir Mordrid being the type of guy that wouldn’t take advantage of an empty throne. So, my goal throughout this game is to make him a tyrant, but not without his motivations and opinions—this world’s version of Thanos. If I can achieve that goal in the full game, I’ll consider it mission accomplished and a job well done by the devs.

I was glad to finally play a proper build, because I had very few positive things to say about the first one I played. King Arthur: A Knight’s Tale provides the tactical combat that keeps me coming back to the genre while breathing new life into it. The story is a unique take on one that everyone is familiar with, and adds some player agency with great potential. After the few hours I spent with the game, this is one that some might want to keep an eye on. $34.99 seems like a high price for Early Access, but it may be wise to purchase it now in case the price increases when the full version comes out.