Strap on your neon goggles and grab your light weapon. Get ready to fight to the death with bright neon lights. Outsmart your enemies with Tron-like light barriers that disintegrate your enemy. Ram your foes into their demise. Steal barriers over to your own color. Gain temporary invisibility and phase through your enemy’s barriers. Stun them with a shock, leaving them helpless on the ground as your light barrier approaches them. Or grab a blade to deal swift, but deadly assassinations. 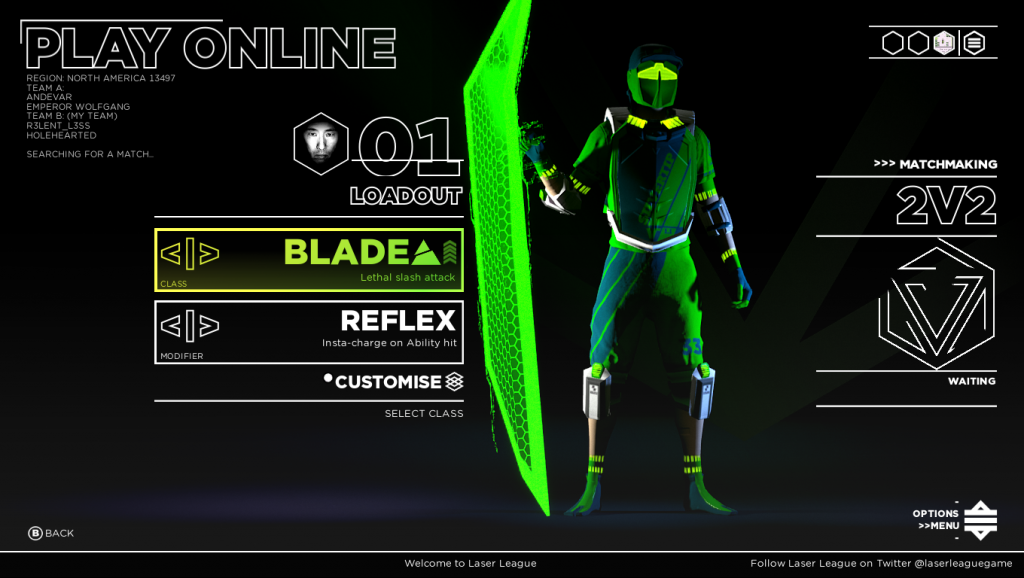 Choose your loadout before you head out.

Laser League is the newest arcade game to come from Roll7, the developer of other games like Not a Hero and OlliOlli. While those were well-received games, this one might be their best yet. With Neon-drenched graphics and a game that looks like something out of Tron: Legacy, it’s an addictive strategic, yet endurance-based battle that will have you hitting yourself for making the same mistakes over and over. It can be slow and steady one second and then quick and hectic the next. No sleepers or hesitation in this game. It’s do or die. One slip-up and you’re dead. 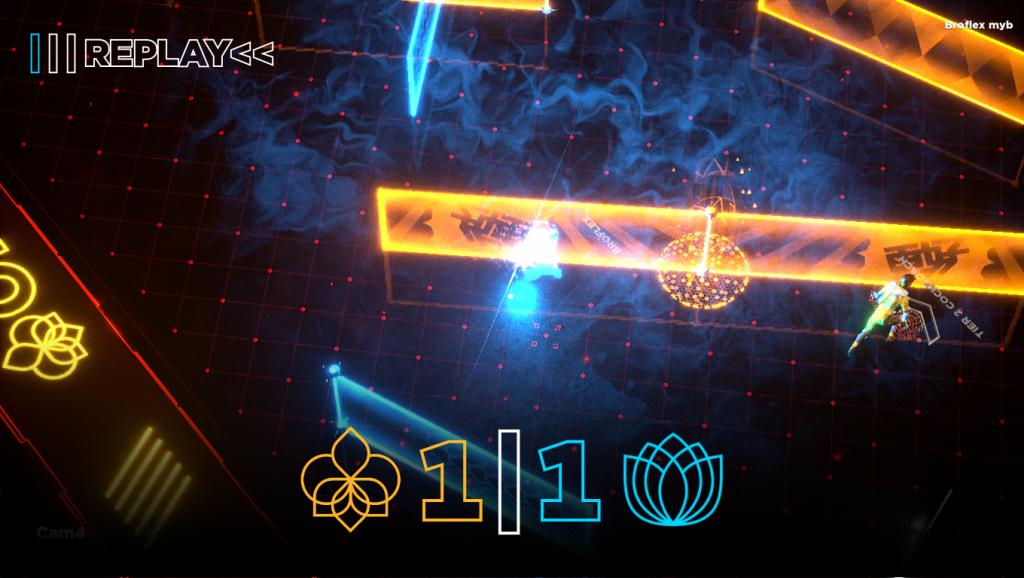 The main point of the game is to eliminate all your foes before they eliminate you. Each match is three rounds—best two out of three wins the match. Each round consists of three skirmishes. You win a skirmish by eliminating all your foes. The first to win three skirmishes, wins the round. Opponents can only die in two ways: by either being touched by an opposing color’s barrier, or getting sliced in half by an opposing player’s blade. 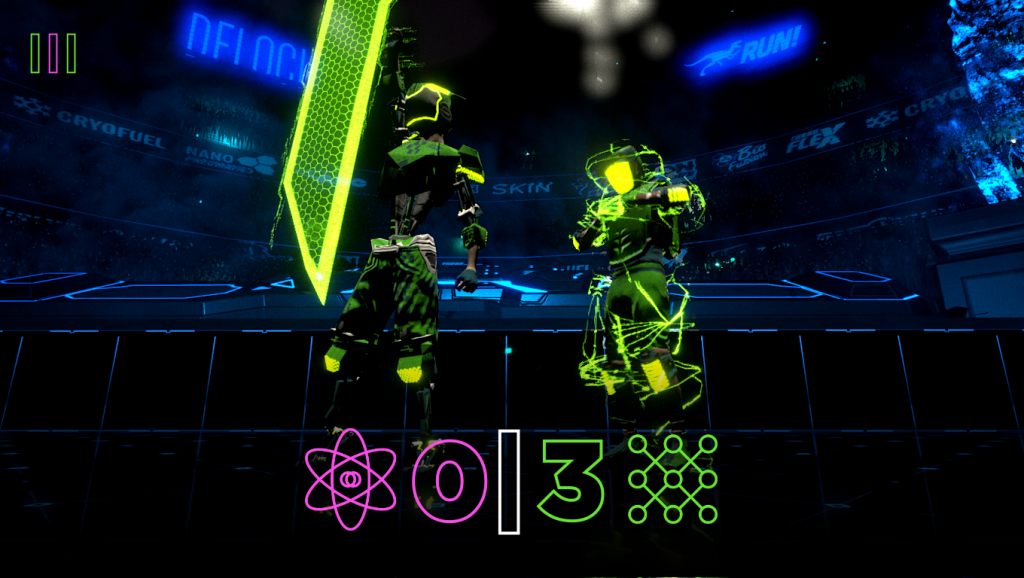 It seems easy, and it is at first. It’s simple, but then the barriers begin to move. Power-ups cause barriers to move faster, change color, or even reset. There are various power-ups that change up the game dramatically. There are currently a total of twelve, three of which I mentioned above. Other power-ups include the capacity to charge your ability, to drain your opponents’ abilities, or to give your team a temporary shield. There are various others, but these are the most daunting. 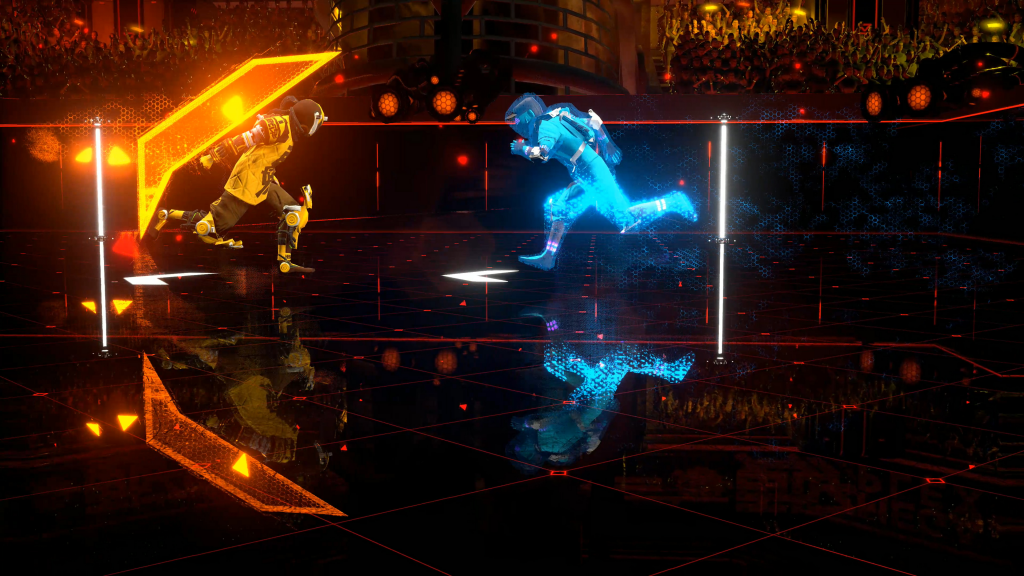 Temporary shield gives you invincibility to everything, enemy barriers, blades, and all

You begin the game in one of two teams, separated by color. You can choose a loadout before the match is ready. There are currently six different abilities to choose from. Blade, the ability to instantly kill an opponent, which requires exact precision (or just blind luck). Smash is the ability to ram your foes into a barrier or to temporarily ground them, putting them in a daze. Shock, the ability to stun your foes with electricity, goes well with Blade, because it’s much harder to hit a moving target with a one-shot attack. My personal favorite, Steal, allows the player to change the color of a single barrier—or two if they’re close enough. 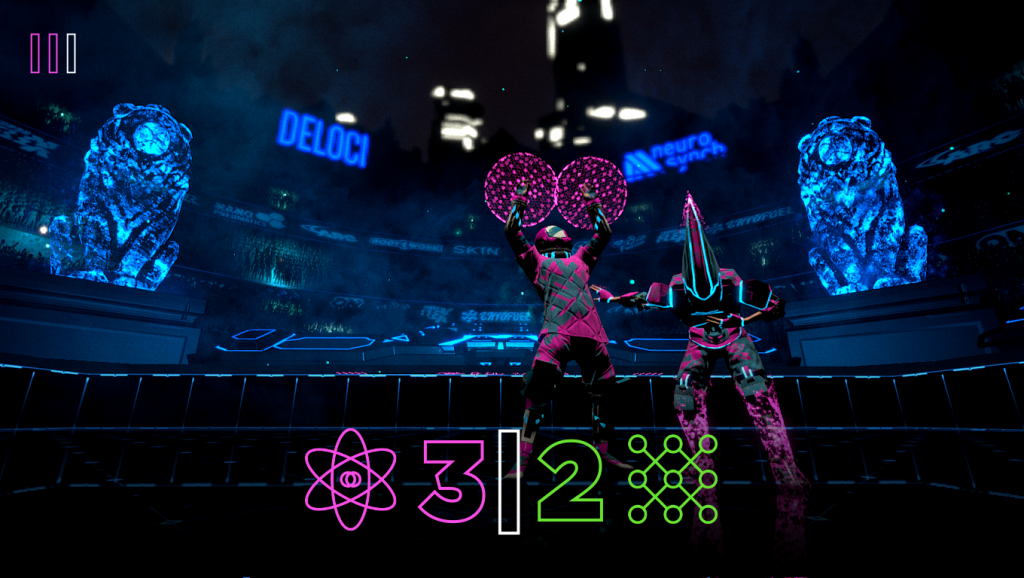 You lose, we win 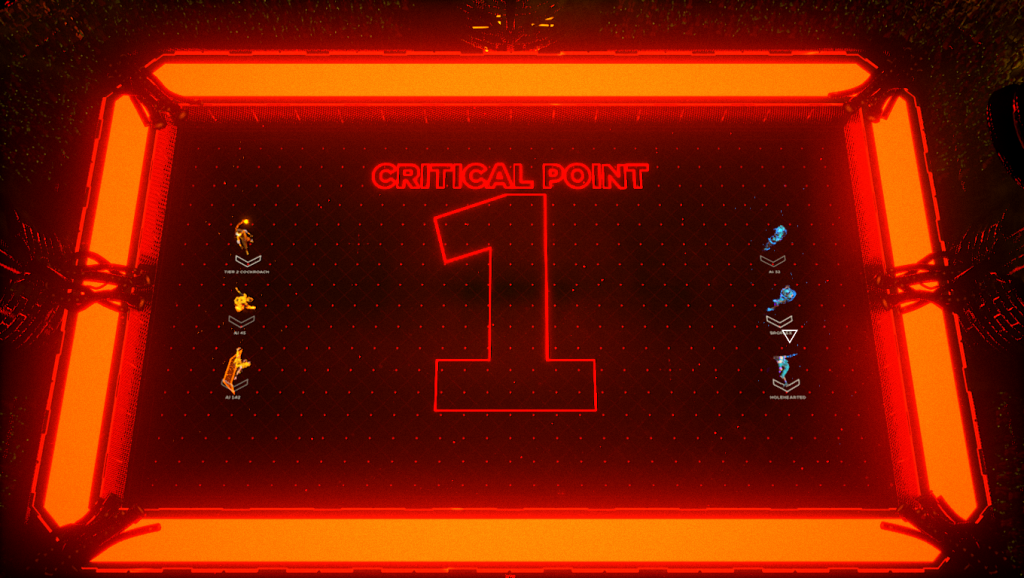 Before each skirmish, the map counts down to one, and it will remind you that this is the critical point for one or the other. If they win this one, they win the round

All players have the ability to activate barriers by simply touching them. But run into an opposing color’s barrier, and you die. Luckily, a teammate can revive you by simply running over you. This factor works well and can make a single skirmish last what seems like forever. This is why I say it is also a game of endurance. If you remain steadfast and do not lose your head, you very well can have the winning advantage. 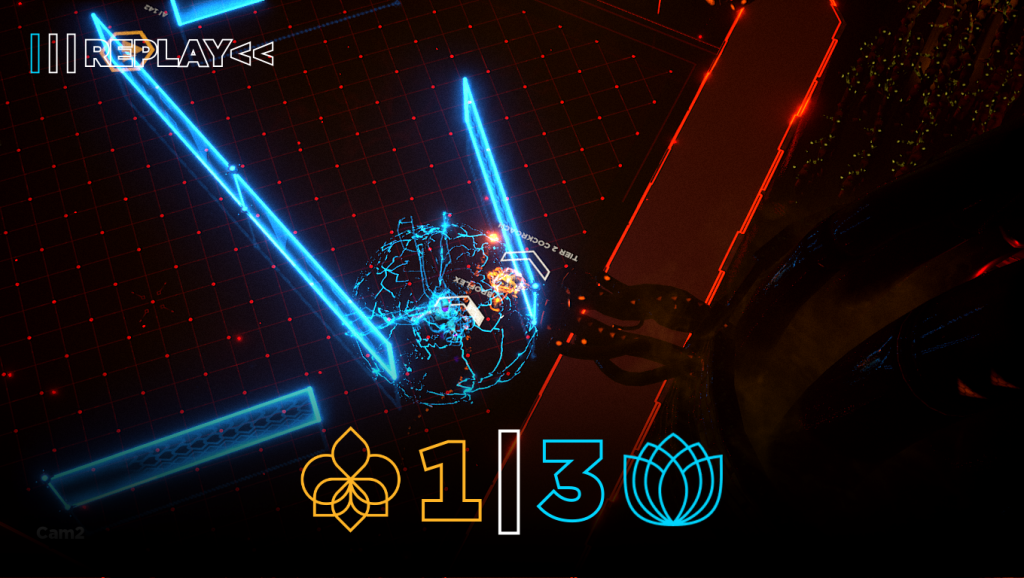 Caught between a rock and a blue barrier

First impressions of the game are great. I would play this game every day for a long time. While I do not recommend playing this game while drowsy or tired, it is a game that requires a complete focus. It’s addictive and you’ll find yourself making simple mistakes. And there are so many ways to mix the player abilities with others that will have you trying out different strategies for a while. You’ll find yourself saying that you’ll play one more match because you really goofed up that last one. 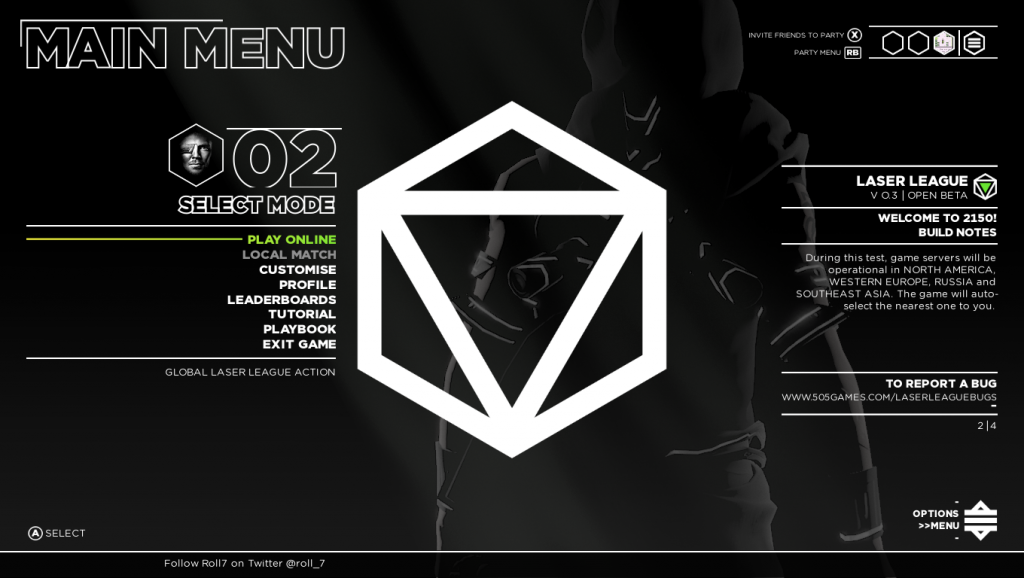 The main menu is simple enough and has cool music

You can play with either a two versus two or a three versus three set up. At the end of each match, it shows who were the highest ranking players based on barriers activated and eliminations. The game moves fast and you must move faster. The matchmaking was fast for me and the server only failed once—which is expected from a weekend of free open beta.

Made with Unreal Engine, the graphics are crisp and seamless. The environments are like an other-worldly, futuristic rave arena. Everything is neon and it’s great. The music is like something from Tron: Legacy by Daft Punk. If the gameplay isn’t enough to keep you, stay a while for the style and the look and the feel. 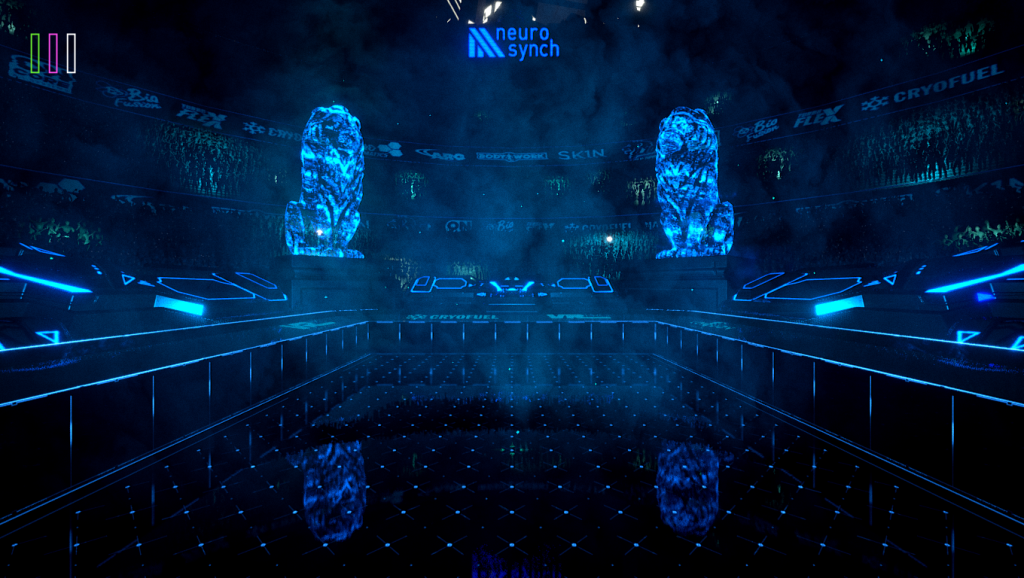 Can I live here? Thanks.

The game has no release date yet, but it is set for a launch into Early Access in February 8, 2018. This is a game to follow. It is indeed easy to pick up and hard to put down, just like the developer states.