Allow me to be upfront: Mars or Die! could easily be the most fun game you will never win. Designed as an endless experience where your defeat is an inevitability, Mars or Die! is focused more on the experience than the goal and benefits greatly from it. While there are currently a few hiccups, with a bit of improvement this could easily be a new gem. 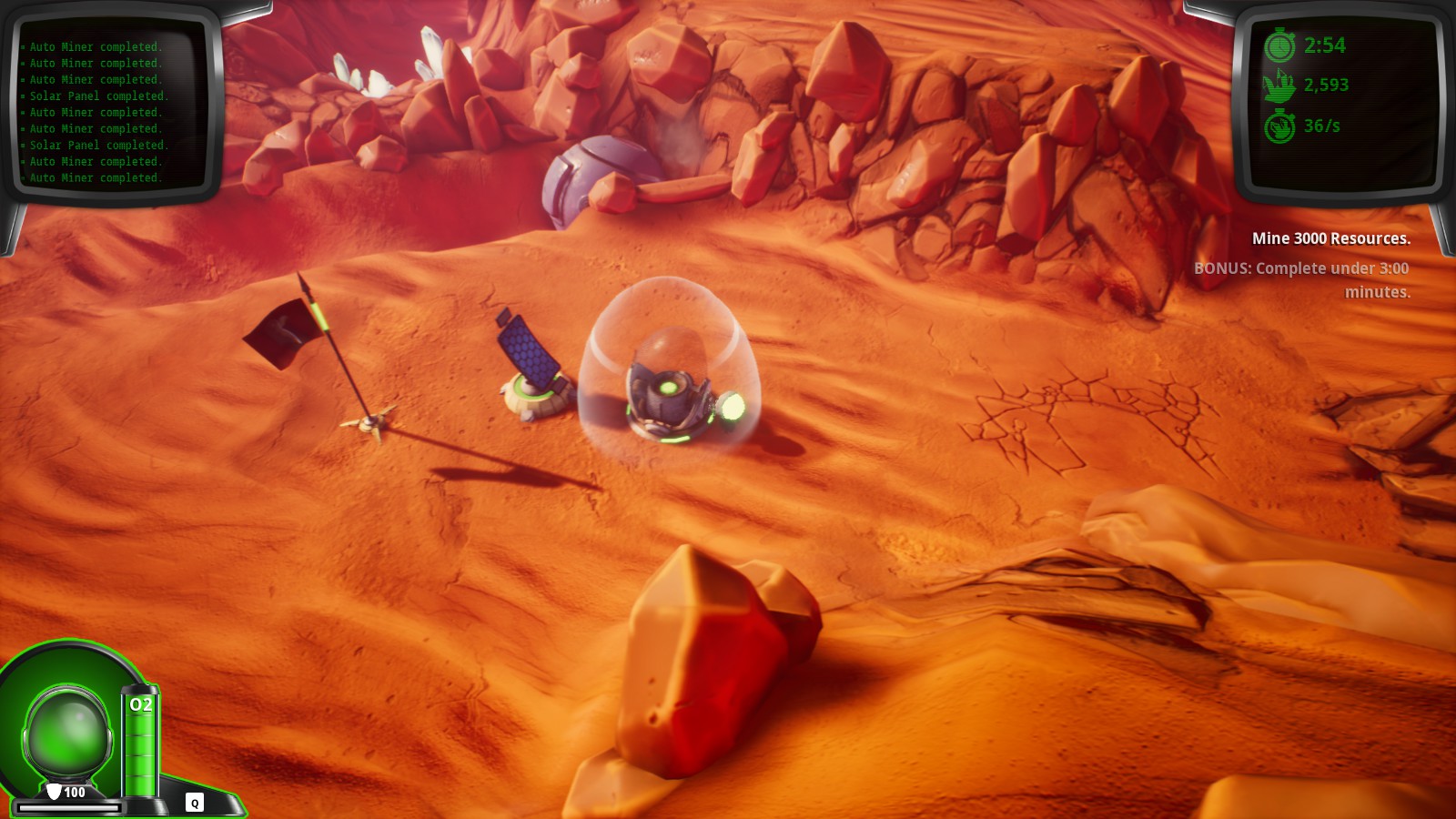 Behold, the land which shall be ours!

You take the role of two explorers, Bean the Scout and Bob the Major. These two, originally meant to go to the moon, end up on Mars due a clerical error. Not to be deterred, their Supremely Illuminated Leader gives them the order: conquer this alien planet. As your communications fail he continues to offer increasingly unintelligible encouragement towards this goal, always ending in the titular exclamation, “Mars, or Die!”

Presenting everyone in bobblehead proportions ensures everything feels cute and fun. At the same time, it’s clear both in game and in promotional materials that you the player are representing a fascist state. Rather than clashing, these two aspects compliment each other wonderfully. It’s the same formula that works for many a sitcom: you’re watching something charming enough to keep you invested, and at the same time, since they’re objectively horrible people, you don’t have to feel bad when they eventually fail. 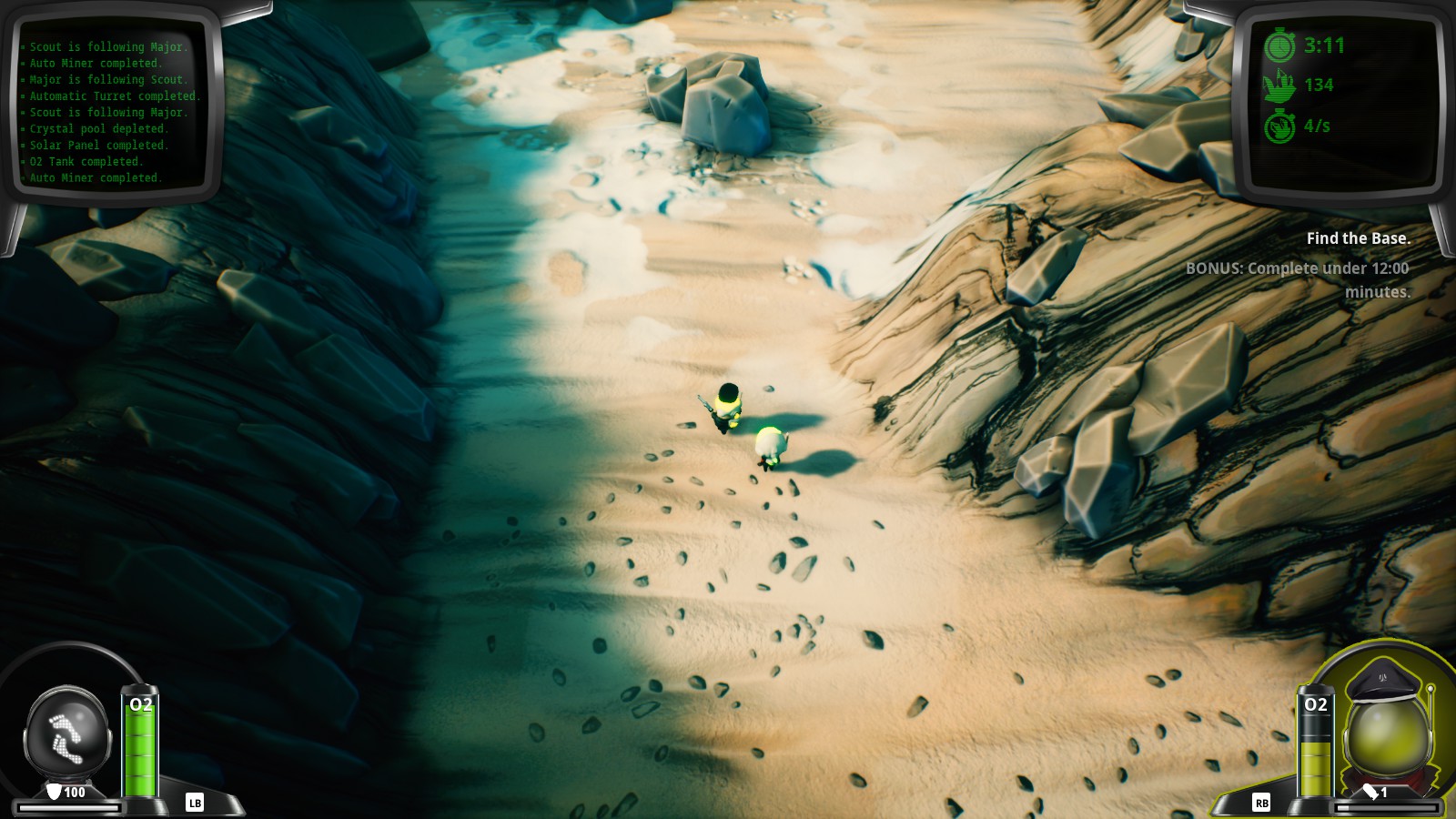 Onward, Comrade! To our horrible demises!

And fail they do. The game offers a surprising amount of difficulty for its apparent simplicity. In the single player campaign, the game introduces its core mechanics through a series of missions that focus on different aspects of gameplay. The game combines elements of tower defense, roguelikes, and twin stick shooters. Taken separately it can be hard to seen how these work together. However once you reach the missions where it all comes together, it clicks. 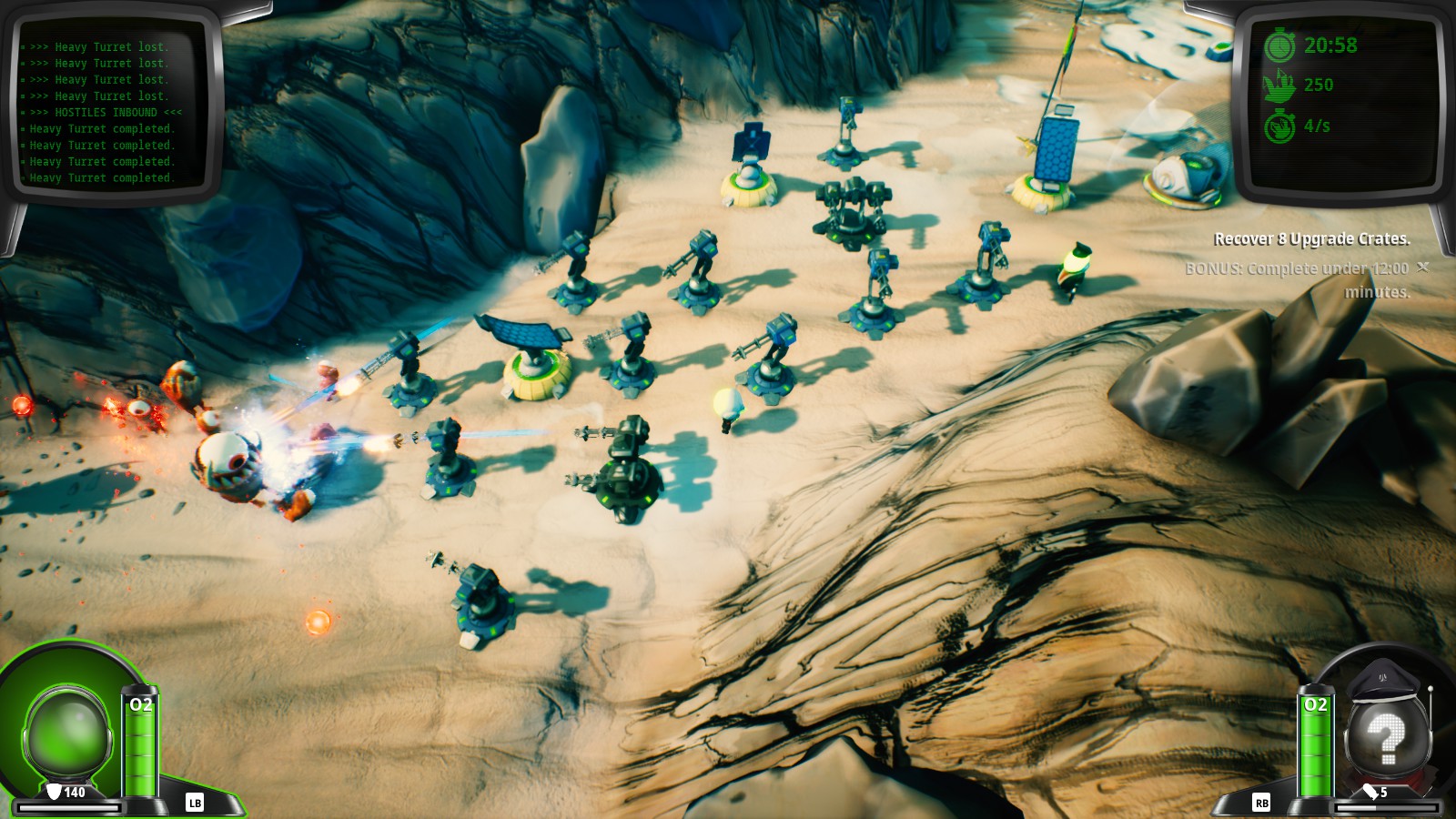 Suddenly, the Supremely Illuminated Leader gives you a mission. You have to progress from one end of the map to the other. Simple enough, except every few minutes a wave of enemies will swarm the screen, ready to destroy you. So you will need to gather resources to craft defenses, oxygen tanks, and solar panels, among other things. Of course its rare to find enough resources for all you need in one place. You’ll have to venture out whenever you can to gather more, and rush back before you come under assault again. And of course, you can’t simply plant yourself in one spot. Each wave of enemies gets increasingly larger, so you’ll need to continually bolster your defenses. And of course, all without forgetting you still have your objective to reach. 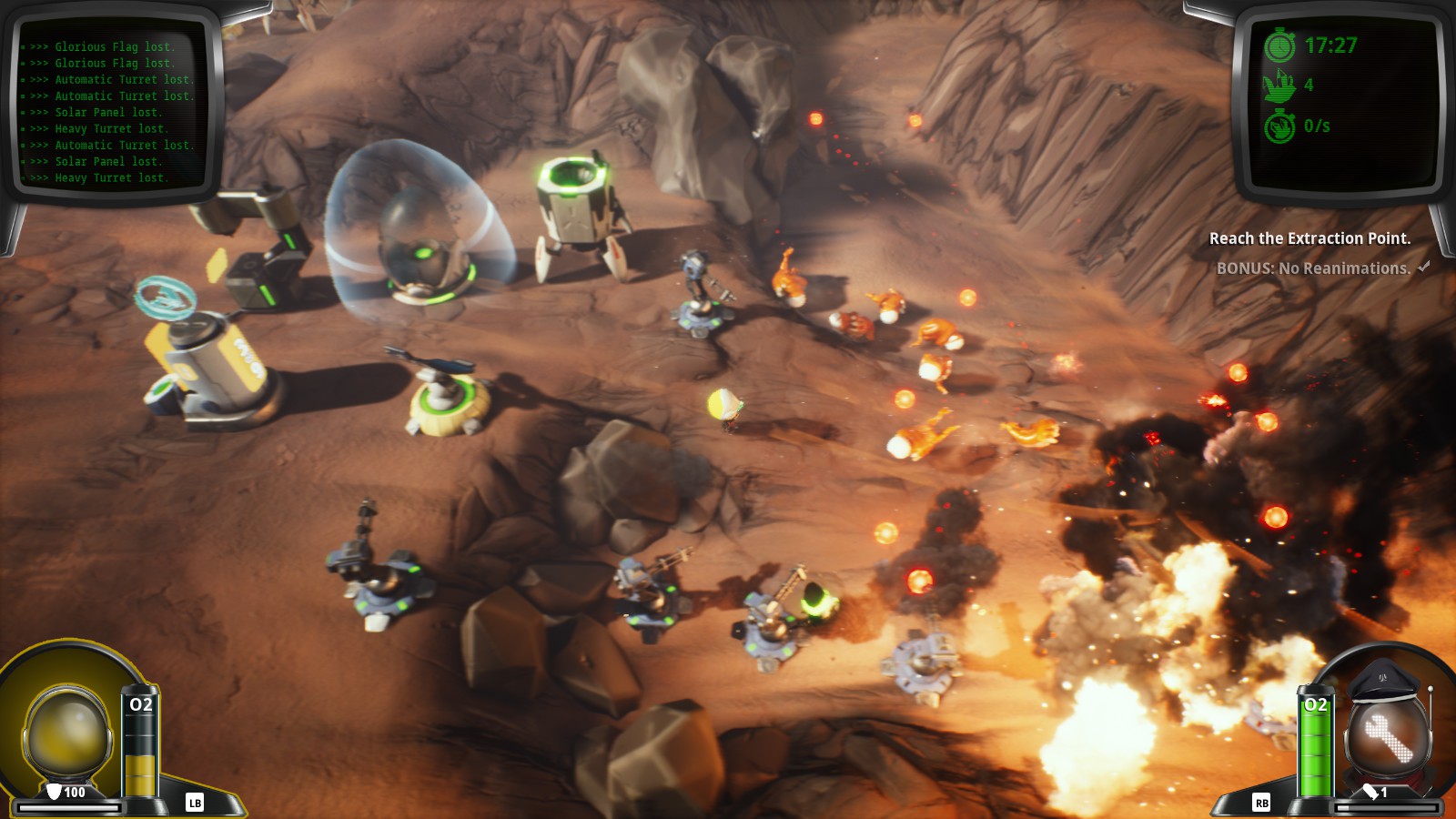 Our impregnable fortress has failed! Flee!

All of it comes together perfectly, creating a frenetic experience that is just the right combination of challenging and exhilarating. Once the ball is rolling, things feel like they could fall apart with just the slightest push. Ignore one section of the map too long, and enemies might break through and wipe out half your buildings before moving on to you. Try and focus on everything at once and you’ll spread yourself too thin. It becomes a balancing act of knowing just how much you can afford to lose as you inch along the martian landscape.

The two characters you play as each have their own unique traits that make them better suited for different tasks. Your scout moves slightly faster, making him excellent for darting out to collect more resources or pick up an upgrade on the other end of the map. However, he only carries a shield which means if enemies corner him it could be fatal. Your major carries a pistol that can fend off the martians much better. It’s another strategic choice to know which to use for the given situation. And many times being forced to put each character on separate parts of the map just increases the frantic nature of the game which draws you in. 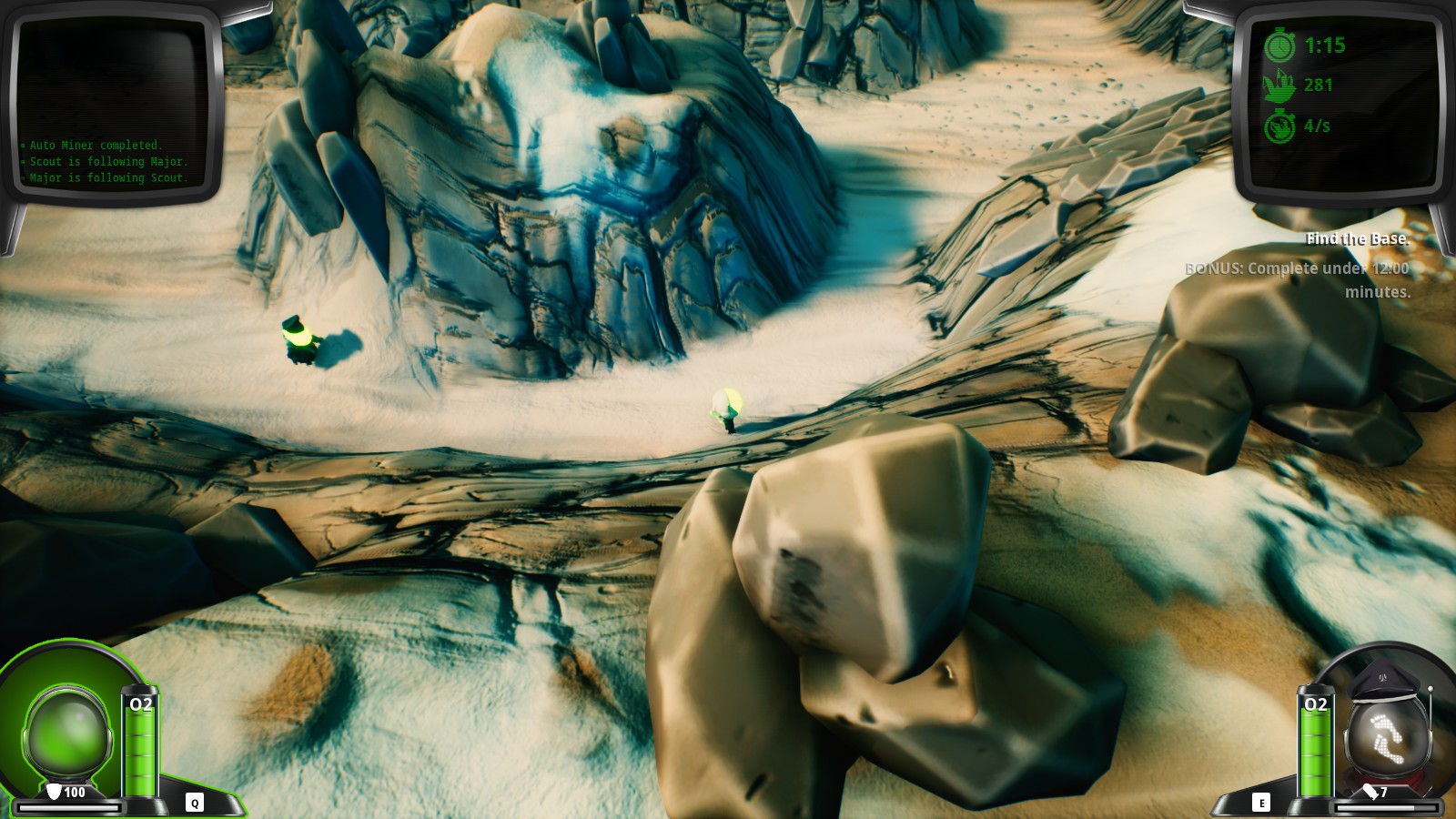 Beyond the general gameplay, there’s a whole host of details that improve the experience. I’m always a fan of game mechanics being designed to fit into the game world, and Mars or Die! does this elegantly with the oxygen gauge. Rather than abstract health points, the game measures how much oxygen your would be colonists have to work with. Apart from adding another layer of fun with a ticking clock that counts down without an enemy even laying a finger on you, it works itself into fun mechanics. Rather than dashing, you can let air out of your suit to propel you forward faster. When one of your two characters falls, the other can siphon some oxygen from their suit into their fallen comrade’s, reviving him. This fun internal consistency keeps the game feeling unique and well thought out. 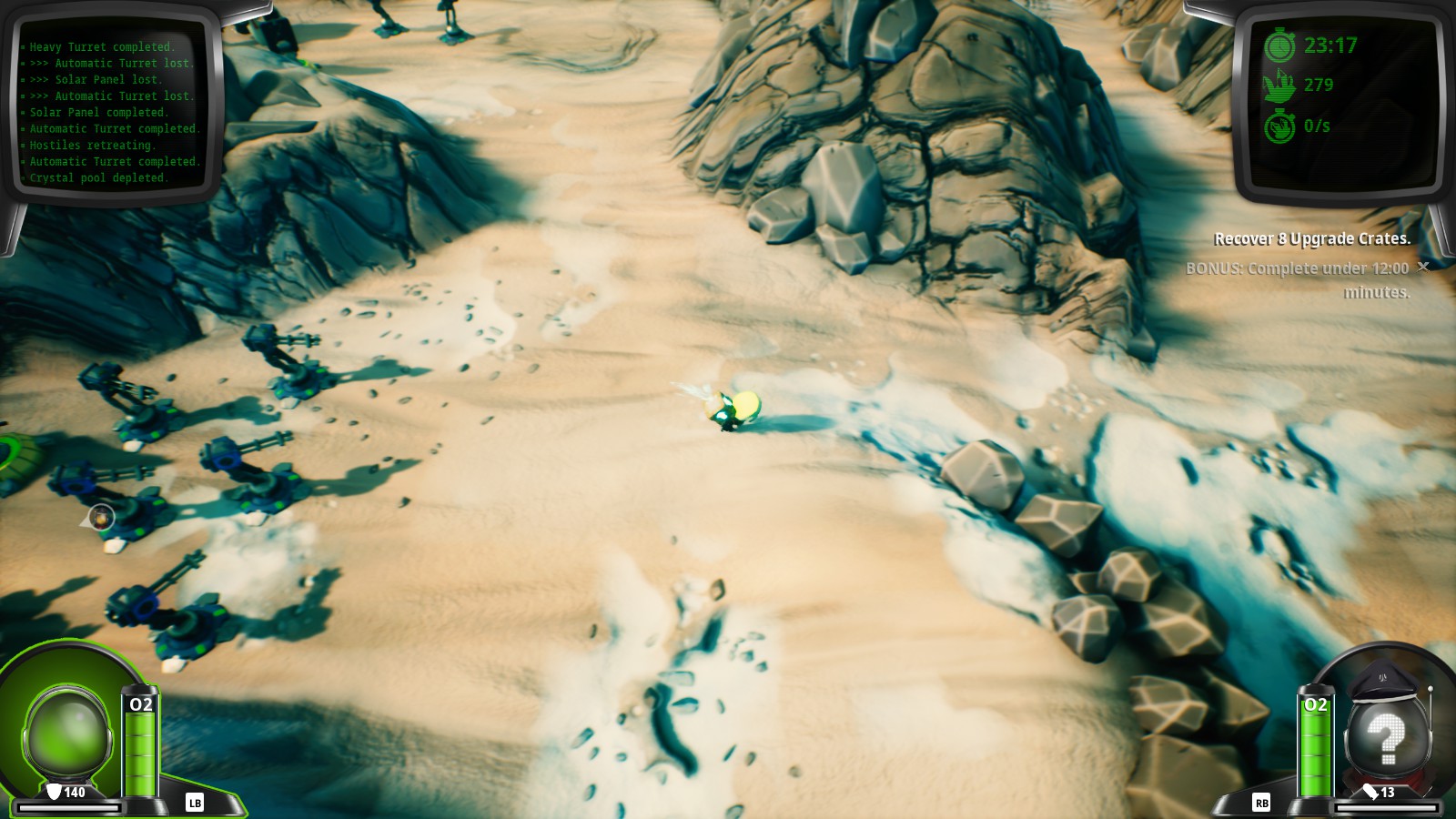 This upgrade shall serve the cause well.

The game is not in a perfect state yet, though. The biggest place where Mars or Die! needs improvement is the AI—both the one that controls the enemies as well as the character you aren’t currently controlling. Both seem to have difficulty with pathfinding in several instances, getting caught in tight corners and fruitlessly running in place. It’s especially noticeable in endless mode, one of the game’s big drawing features. When enemies can’t navigate around each other and get stuck in a tight corridor, adding more does nothing to create a mounting difficulty. Without an additional objective to keep you moving, it’s easy to get a really high time, which is the exact opposite of what the game should be. 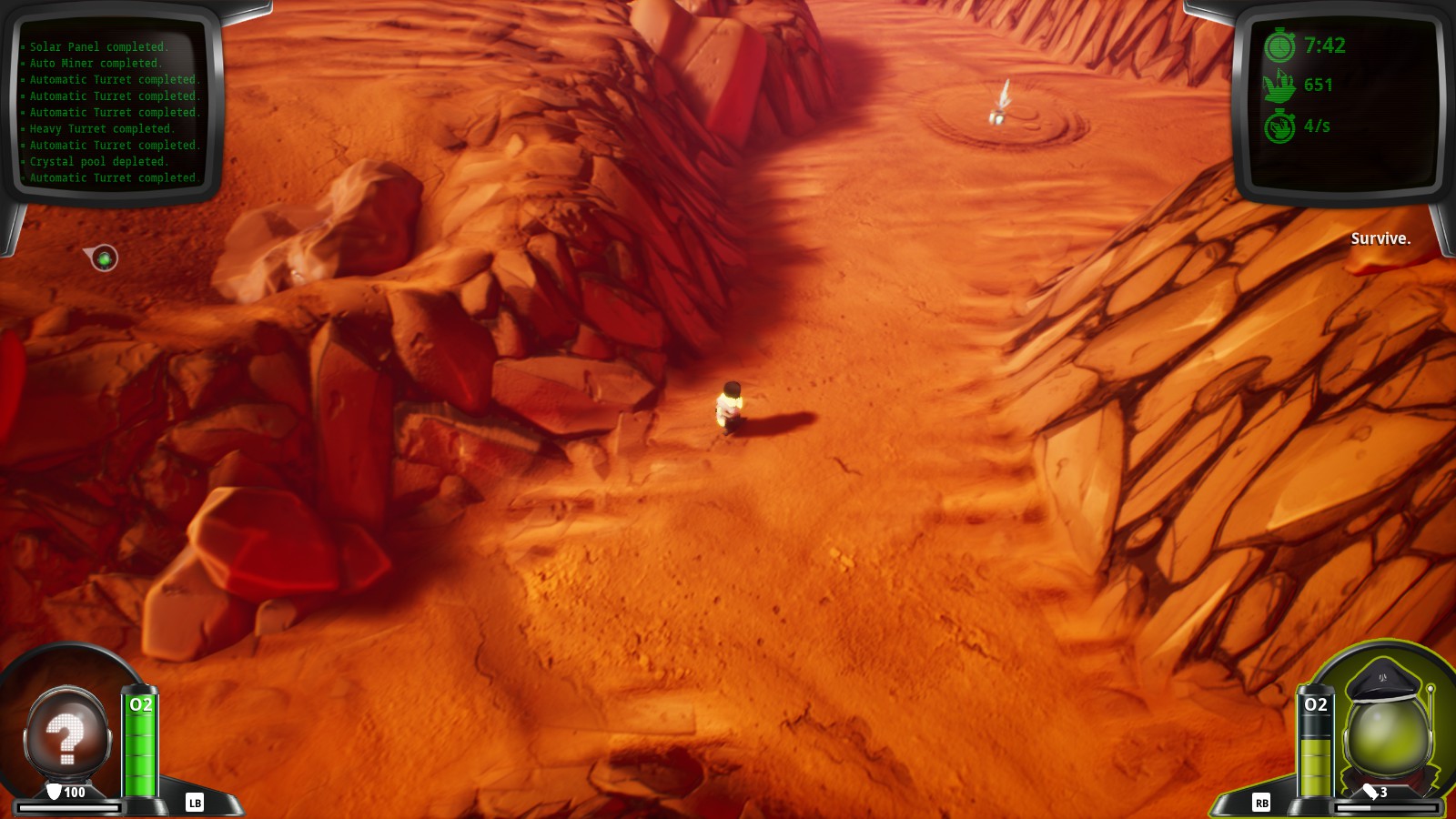 Fall before our superior tactical positioning!

I can be certain though that the developers are aware of this problem and are working on it. It’s clear that Mars or Die! is a labor of love for those making it. As a small team based out of Italy, 34BigThings clearly poured their all into this endeavor. It’s one that lies close to their hearts and I’m confident they will release something they are confident they can be proud of. And when they do, I will be ready to continue my hopeless quest to conquer the red planet for the Supremely Illuminated Leader. Mars, or Die!