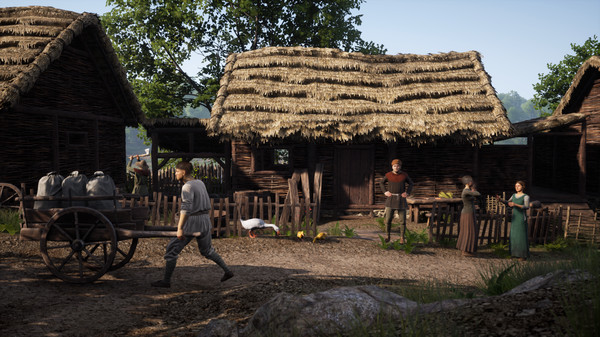 Video games set in medieval times are nothing new. Throughout the decades the Middle Ages have been the setting for many stories with a fantasy element, with the player coming across creatures such as wolves, demons, dragons, and much more. What if there was a game that not only did away with all of those elements, but had the player build their own medieval settlement from the ground up?

The player character, Racimir, is an orphaned youth who has escaped the ravages of war that has left his family dead. Now on his own, he embarks to create a new life for himself in a lush valley, filled with vast resources and ample opportunities. The map is yours to explore and the landscapes are free for you to use and develop how you wish. By visiting nearby villages and completing tasks, Racimir can build Dynasty points and increase his reputation. With enough time, the player can eventually create his own village, inviting others to come and work for him, and raise a family of his own with an heir to pass on his legacy.

As this game is still in Early Access, there have been updates and feedback given by players since its initial release on September 17th. That being said, this game is by no means incomplete and there are all kinds of things to do in this medieval playground. There is a story and key characters present of a sort, but they are not necessary to complete and interact with to create a fulfilling experience in the world of Medieval Dynasty. The focus of the game instead is to use the resources around you to survive and build a new life for yourself, whatever that may look like. Once you begin collecting the necessary materials, you can use them to build houses, furniture, farms, food storages, as well as places to make and sell your own materials, such as clothing and building materials. 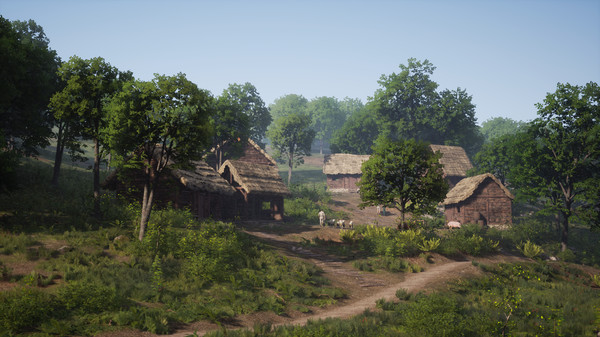 One of my favorite things about Medieval Dynasty so far are the lush landscapes that you can explore and build with. Forests, clay, stone, and fresh bodies of water are available for you to use freely, so long as you don’t cross the weight limit that you can carry them with. Survival is also key to this game; Racimir can grow thirsty and hungry, and it’s important to keep an eye on those bars as they deplete throughout the day so that he doesn’t die of thirst or starvation. There are also animals to hunt, with such as docile deer, fish, rabbits, and foxes. Others can be more dangerous and can attack you within a moment’s notice if you’re not paying attention to your surroundings, such as wolves, bears, and wisent. Equipping yourself with a well-crafted bow or wooden spear will be essential to protect yourself as well as hunt these vicious creatures as needed.

Along with hunting and farming to procure food, you can also forage your surroundings for materials to build with, such as sticks and stones, or small amounts of food like mushrooms. It’s important to read the description and details for the items you pick up, however, as some of these mushrooms you find may be poisonous. Fortunately, there are also plants you can find that can stop the spread of poison and help restore your health.

Not everything in Medieval Dynasty will be available to you right off the bat. You start the game alone and must build relationships with others in nearby villages in order to convince them to join your budding village. The same is true when you’re ready to raise a family and must select a wife to help you in the household as well as help the community grow. There are different jobs for villagers that can be created as you create more buildings, such as a hunter for meat storage, an animal breeder for farming, a tailor for sewing materials, and so on. More advanced materials become available the more Dynasty Reputation you acquire by helping other villagers, as well as basic survival activities, such as chopping down trees for wood, hunting, setting up traps, and fishing. The more buildings and products can be unlocked from your hard work, the more opportunities you will have to help your small village grow in both power as well in scale. 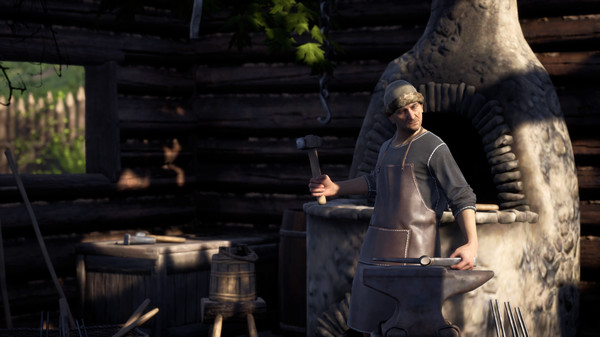 Medieval Dynasty has become a rising hit with players who have discovered it, if the 12,000-plus reviews on Steam are anything to go by. The developers are deeply communicative with their base, addressing ongoing bugs and taking suggestions that fans would like to see in future updates. That being said, it’s fair to say that there’s still a lot of work left to do before this game really does shine. As a game set in medieval times, it feels very isolated in that there are not a lot of settlements to explore on the map. As it’s set up to be a survival game, this is understandable, but I would have liked to see settlements grow and change over time, just as you are beginning your own settlement. Taking it a bit further, I wish there were cities and castle that you could visit and explore. It would be delightful to have your character explore a bustling market town and interact with vendors and different guilds that you could possibly join, as well as greet the nobility. There’s talk from the developers of adding horse-back riding to the game, as well as bandits that you would need to fend yourself with, but as of this writing those elements have not yet been added to the game yet.

In conclusion, I’m glad I discovered this game just as it was being released, so that I can play and watch its development in real time. Although it clearly is still in development, there is already lots that players can do in this game, and there will be more added in the future that will ensure its longevity. If you’re a fan of survival games or medieval society in some aspect, Medieval Dynasty might be a game you may need to check out.