The popularity of games can be a fickle thing. Every once in a while, a YouTuber plays a game, and all of a sudden it becomes an internet sensation, regardless of being out for years. That’s how I discovered Raft. Though it had been on Steam for years (and Itch.io before that), I first found out about the game by enjoying a Markiplier playthrough of it. It looked fun, but I never thought I’d actually play it. That is, until a friend spontaneously bought me a copy so she could play it with me, and I’m very glad she did. Seriously, if you’re thinking about getting someone something out of the blue, do it. I felt so loved and appreciated, I was walking on clouds.

It should be noted that, despite feeling like a full game, Raft is still in Early-Access on Steam. That being said, let’s get started with our Raft preview! 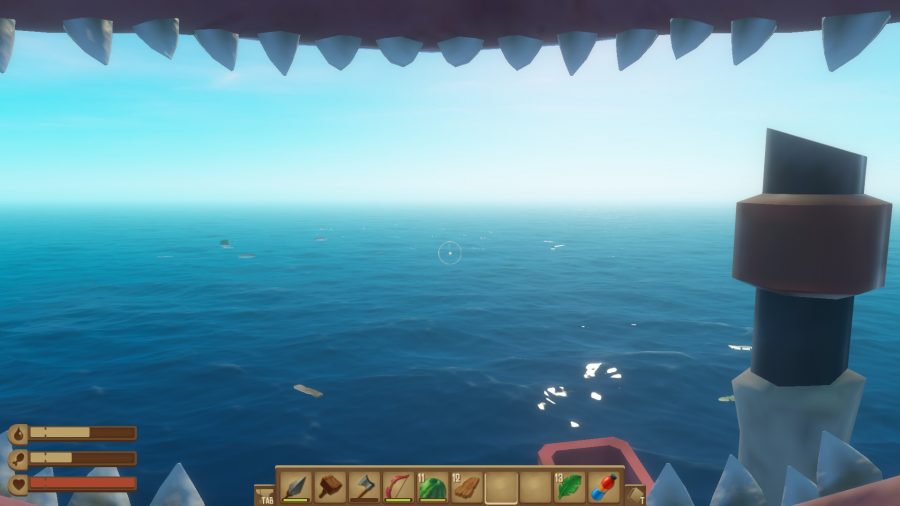 Nothing to “sea” here, don’t mind me.

Yo ho, Yo ho, a Rafting Life for Me

Upon starting the game and creating a world, you are left on a 2×2 square raft with nothing but a junk-hook, floating litter on the surrounding ocean, a shark, and a dream. After using your junk hook to collect the floating resources, you can begin to craft things: sails, weapons, water-filters, etc. The survival aspect of this game kicks in before long, requiring the upkeep of food and other resources.

Islands are spread across the world which allow the player to get resources not found on the sea, such as coconuts and fruits. If you’re lucky or have crafted certain items, a story-driven island appears occasionally, which is a ripe opportunity for getting new materials, crafting blueprints, and exploration. 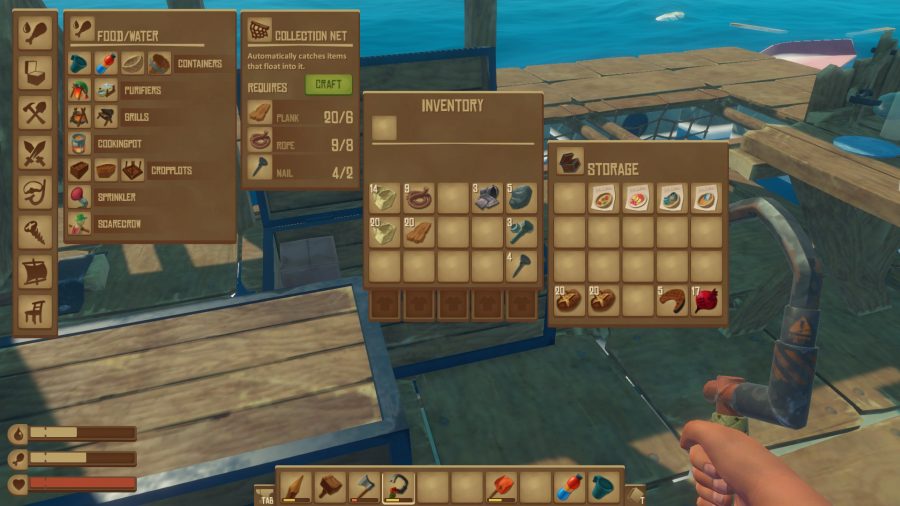 Why is Everything Wet?

Raft takes place in a post-apocalypse where the Earth is flooded (think Noah, minus the ark). Being one of the last survivors of Humanity, it’s your task as the player to survive and find out what happened to the world. Notes are found on story-based islands, which also have coordinates for the next island’s location. Often, they also have nice gear to help you along the way.

That is, IF you FIND the islands. Unfortunately, all islands are spawned by random chance, so the first island pretty much has to be found by total luck, unless you want to craft some high-level items, which is time-consuming. In the early game, there is no option but to go where the wind, or water, takes you. This means that initially you can only go where the game wants. Because of this, my friend and I had to resort to restarting several times. In our first world, we spent three gaming sessions (approximately 8 hours) just to find the first story island. By contrast, when we started a later game and added another player, we found several story islands within the same time.

I hope that this is adjusted slightly in the future. Raft is fun, but even with islands it can get monotonous if the story islands don’t appear. It would be cool to have a star-based navigation system which I could use like real-life sailors do. Otherwise, there seems to be little point in day-night cycles other than to have characters sleep, and it would slightly balance the usefulness of a later-made object. 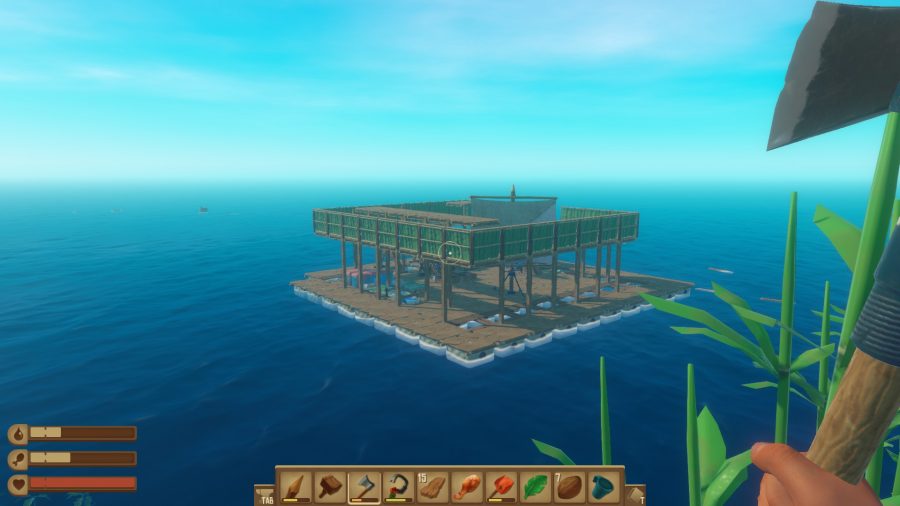 A major factor in what makes Raft fun is it’s multiplayer experience. Alone, there is a lot of maintenance to be done surviving. It’s a bit easier with two players, but resources, food, and water have to be rationed. In our first game, we ate some of our foods too quickly instead of saving them and thus were left starving. I’ve found that the optimal game experience is with three total people, as that allows for the sharing of responsibilities to be a lot more manageable. It’s also nice to be able to stop and enjoy the sounds of the waves as you’re sailing by on the raft, and not have to worry about stressing your partner out by doing so.

Four people would be too many players, though, as then there would be too many people and not enough resources to keep everyone busy. In our latest world, I’ve been the navigator/builder, my friend K is the cooker/organizer/crafter, and my friend C is the fisherman and extra hands for either of us if we need help. Each of us do what we enjoy about the game, and it is an absolute blast.

Relaxing to the Sound of the Waves

As previously mentioned, I love taking in the atmosphere that life on the open water has to offer. This is a big part of why I enjoy being the “navigator” on the raft. The sound of the waves hitting the raft is very relaxing to me, often to the point where I’d be getting sleepy. I love when storms come, as there isn’t any mechanic to throw anybody off the raft, so instead when the waves get crazy high, it feels almost like an in-game roller coaster. 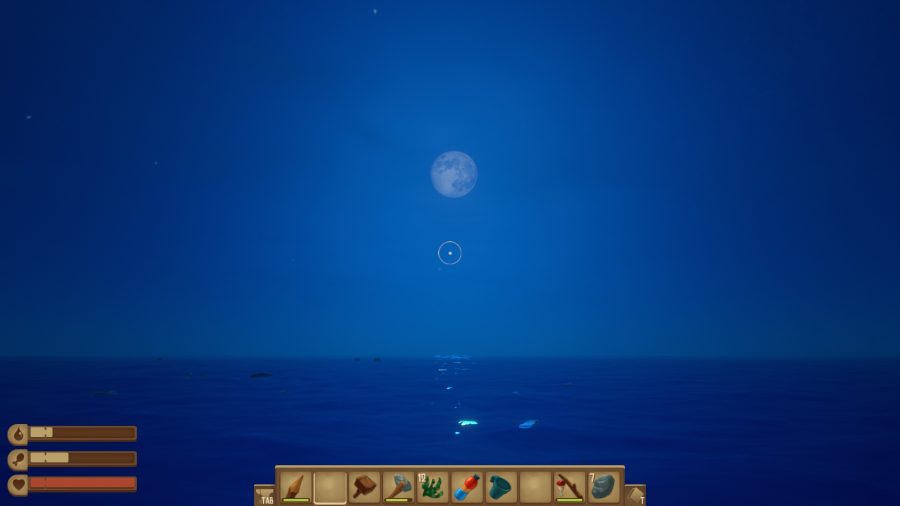 With this kind of atmosphere, who doesn’t stop to take in the view?

Sometimes, calming or adventurous music is queued in to add to the atmosphere of working on the ocean, but it goes away seemingly just as fast. I’m not sure if it’s supposed to be randomly playing like that, but I think being random does help prevent it from being repetitive, and the music accentuates the ambiance well.

To conclude, similar to the beginnings of Subnautica, this game has been worked on for years while still being playable, and Redbeet is doing a fantastic job so far. Since part two of the story was only released on October 8th, 2020, it looks like it’ll still be a while before the game is finished; however, even incomplete as it is, Raft is a blast to play, and I eagerly look forward to what Redbeet has in store for the game’s future!