After spending a stupid number of hours playing Oxygen Not Included—so many that I have yet to write the review—I decided that I should be a better steward of my time and move on from that fantastic time-sink of a simulation to get some actual work done.

And then I requested a review copy of Space Haven, another simulation.

Space Haven got my attention with this bug infestation extermination gif from its press kit!

Space Haven has been on Steam Early Access since May 2020; during that span of time, updates have been consistent. The most recent major patch—in this critic’s opinion—that the developers at Bugbyte have released is the “Alpha 10” update. The major highlights are as follows:

It is strange coming from full-blown simulations like Prison Architect, Rimworld, Factorio, and Oxygen Not Included, all of which underwent Early Access phases, yet the latter was the only one I played while it was still a work in progress. Space Haven is my second ever Early Access simulation, so experiencing the game just as its development team has recently implemented features that I would otherwise take for granted has been an interesting experience. After all, the game has been on Steam for almost a full seven months.

I…cannot imagine playing a space-based game without some sort of map. I guess I started playing just in time?

On Space Haven‘s official site, 3-person development team Bugbyte is not ashamed to admit that their game is inspired by the emergent storytelling in Rimworld, and the resource management of Oxygen Not Included. By emergent storytelling, what they mean is how the player creates a narrative in their heads involving their in-game characters. Because I am still learning the in-game mechanics, I focused less on developing stories for my people, and more on the fact that my crew did not execute tasks in as timely of a fashion as I desired. 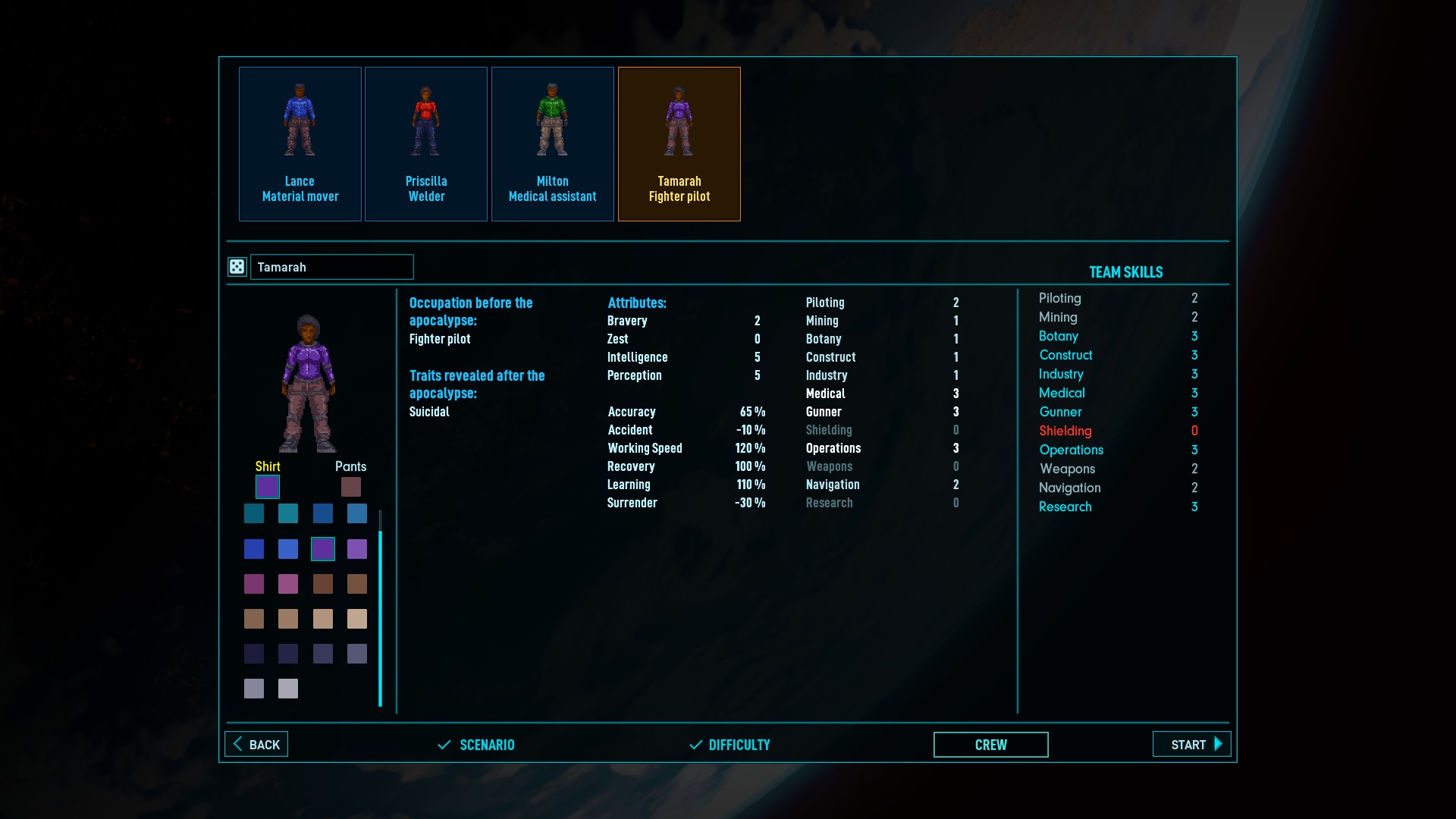 While rolling my starting crew, I made sure that someone could cook food so that everyone does not die from bubble guts, someone to research so that I could unlock new tech, and someone who can use weapons so that my crew could defend themselves. To keep things interesting, I played on hard difficulty. Food presents an immediate challenge; I did not want my team to eat algae sandwiches for breakfast, lunch, and dinner, so prioritizing grow beds under the botany node on the research tree was critical. 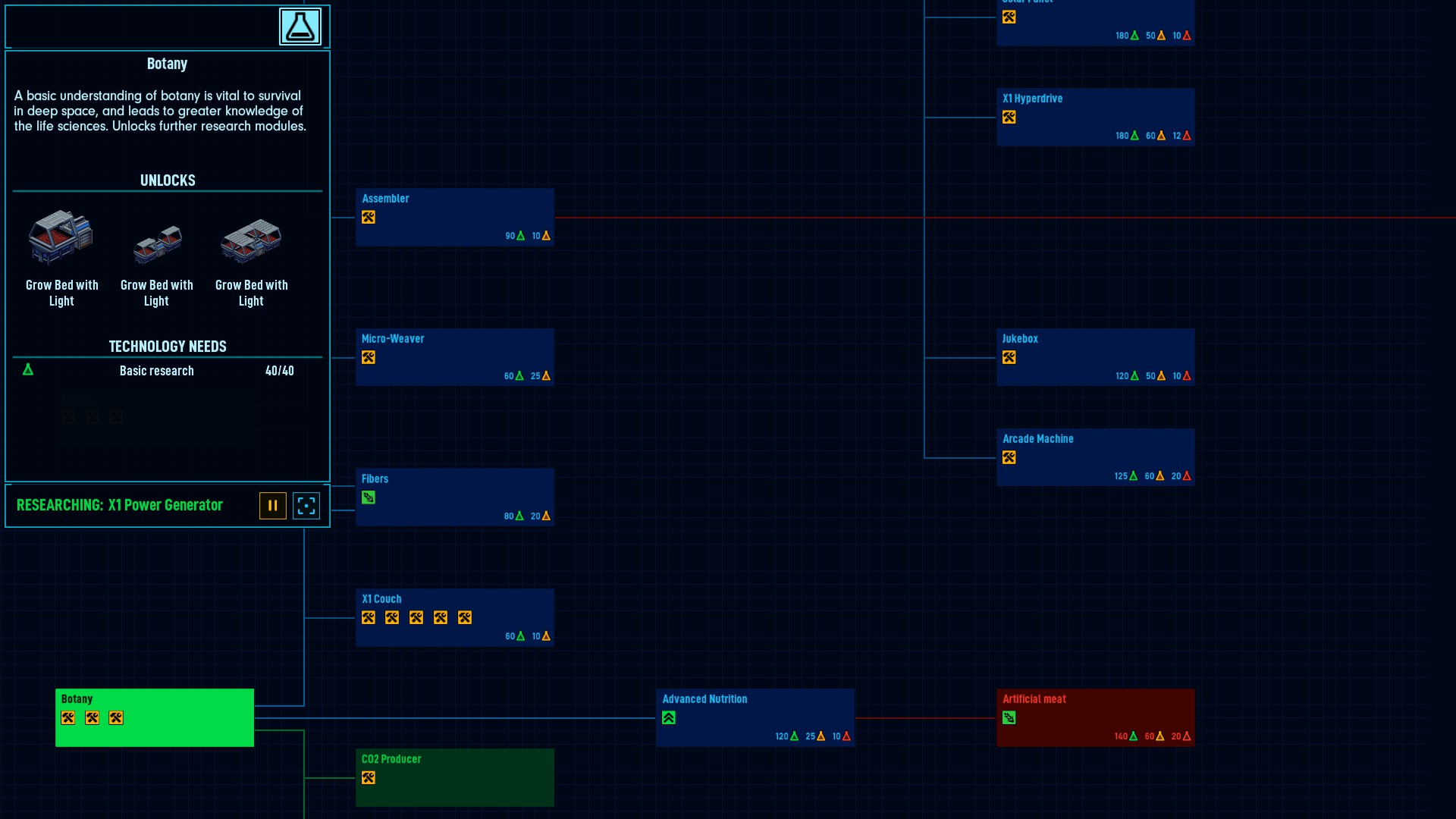 The recently-added research tree is aesthetically basic but functional at the moment.

Separating Space Haven from the other simulators, players begin on a small ship that will serve as their base of operations. Accumulating more crew and resources over time in this game creates a dilemma: how much a ship can contain and move is finite. Typically, creating space or making rooms in a simulation requires one to cut trees or dig into terrain. In Space Haven, one must work to expand their ship’s hull—building rather than demolishing.

Keeping Tamarah in good spirits is a full-time job. Also, note the mineable resources to the left, and the abandoned ship to the right.

This ship expansion feature functions like extending a play map in other sims. However, to keep players from turning their junker into a Star Dreadnaught within the first few turns, ship additions require a finite, specialized “hull” resource. Bugbyte claims that Space Haven borrows its temperature and gas climate mechanics from Oxygen Not Included, but I could hardly tell, because after installing regulators, there was nothing else for me to monitor, and I forgot about them until I sat down to write about them here. However, one mechanic that does come into play is “environment,” which heavily impacts the mood of my crew, especially the one who rolled the “suicidal” trait, who suffers from a perpetual -20 penalty to her morale. Heavy machinery on my ship, such as hyperdrive and energy modules negatively impact mood. Thus, I decided to partition my ship into rooms rather than build one large area. 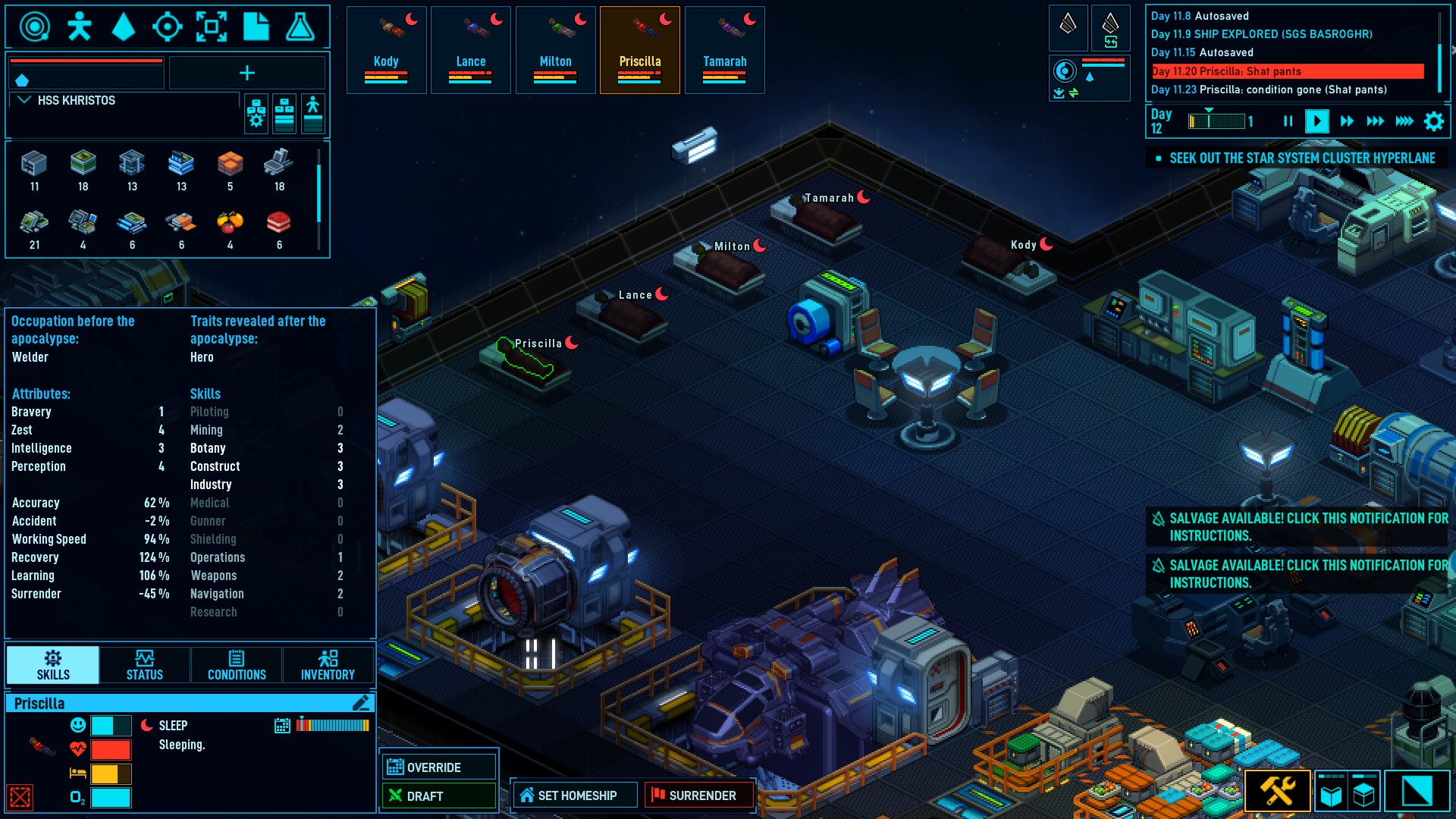 For the longest time, I just built stuff in a large area. I had no idea what I was doing.

Doing so cost precious hull, and I did not wait until I exhausted all of mine, but instead began to search for derelict chips to excavate hull from them. Exploring derelict ships is, so far, the coolest feature in Space Haven. Suiting up crew, arming them, and sending them to dock into other ships via shuttle never became old. Still, I am grateful that BugByte has supplied a fast forward that elapses faster than any other sim I have played, because resource excavation of any kind takes a long, long time. So long, that I would often AFK or read a book until my crew stripped a sector to the bone. 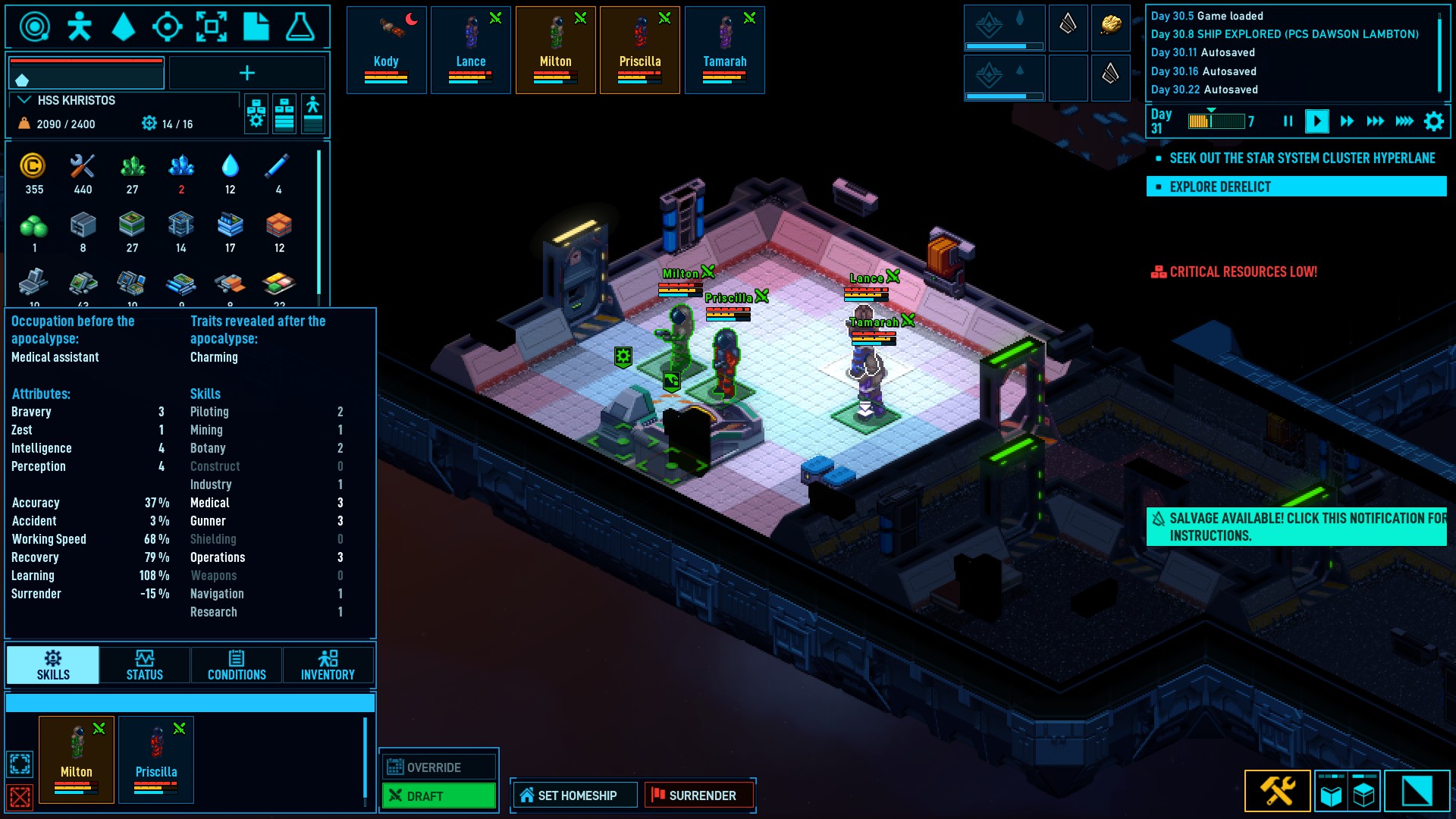 Derelict ships host a fun mini-game of bug extermination. I have never lost a crew member, but some have been injured. Only when a ship is cleared can it be harvested. Watch those oxygen levels!

The only feature within the list in the patch notes that I would consider critical rather than a quality-of-life feature is the research tree. Those familiar with simulations know that unlocking higher technologies is where one will invest a considerable amount of time. As of this moment, the tree appears sparse, but there are nevertheless a few key items. As I have mentioned previously, botany is essential; without growing fruits, nuts, and veggies, crew can suffer from nutritional deficiencies. I did not allow my crew to suffer in this way, and traded resources for which I do not understand their value yet for space food so that they would not starve. However, while mandating some of my smarter crew to research additional tech such as more efficient energy usage, I noticed that they would frequently fail. I suppose that if a low-skilled cook causes everyone to suffer from food poisoning, a yokel trying to perform research for high technologies “failing” is better than the tech itself failing because they forgot to carry the one. Besides, in simulations, people tasked to do things eventually get better at those things. 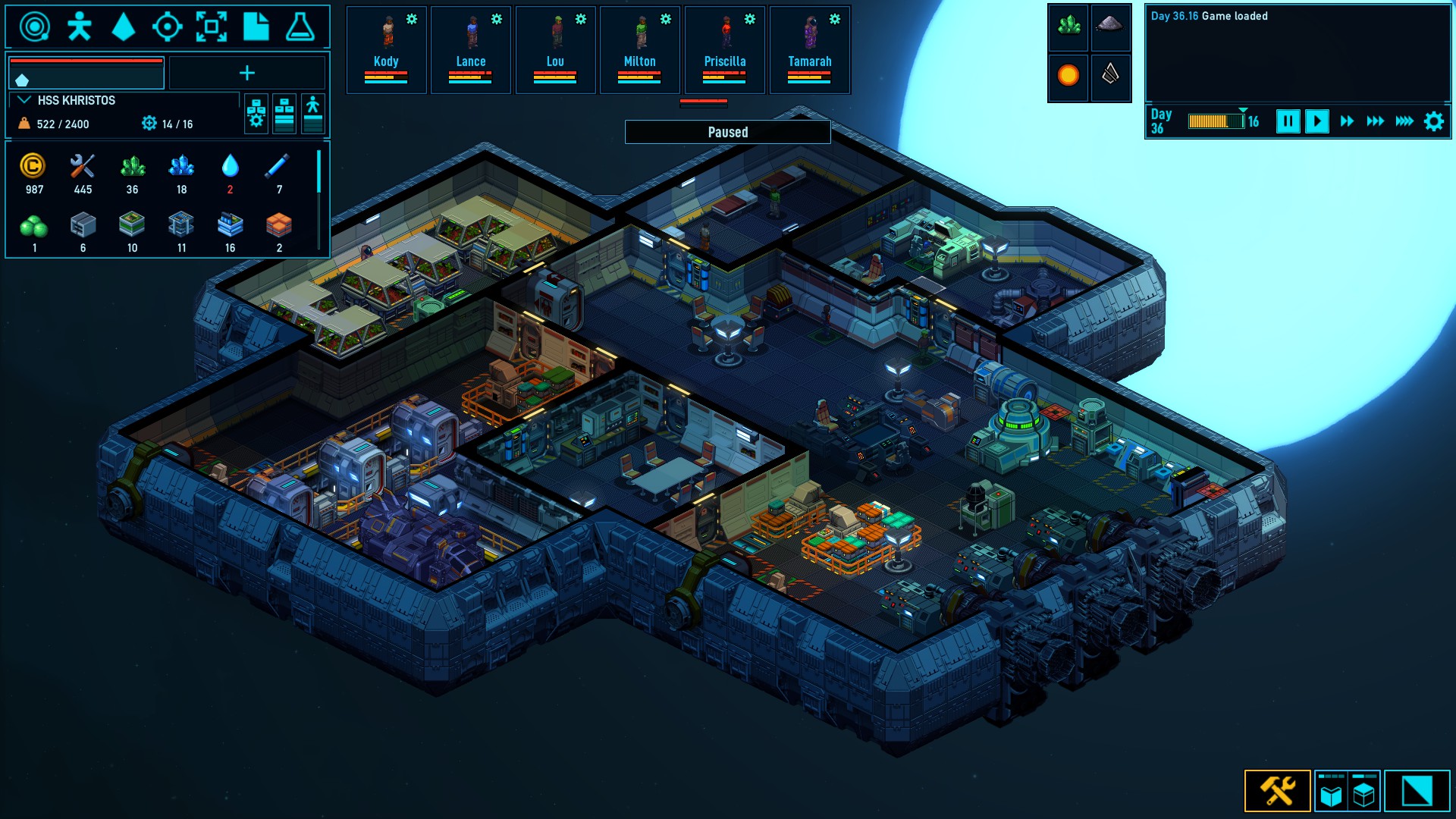 My current ship. Still need to wall off the engine room, but I do not want it too far from the hyperspace and communications consoles, which need to be relocated. Food at top. Barracks on the right. Research below that. Excavation operations on the far left.

Unfortunately, Bugbyte has yet to implement crew leveling up. I only discovered this after logging on to their discord channel and making inquiries. This means that if I wished to play the game to reach Elysium, or become a space pirate, or space cowboy, or whatever, I would be doing so with base character stats. Yikes! 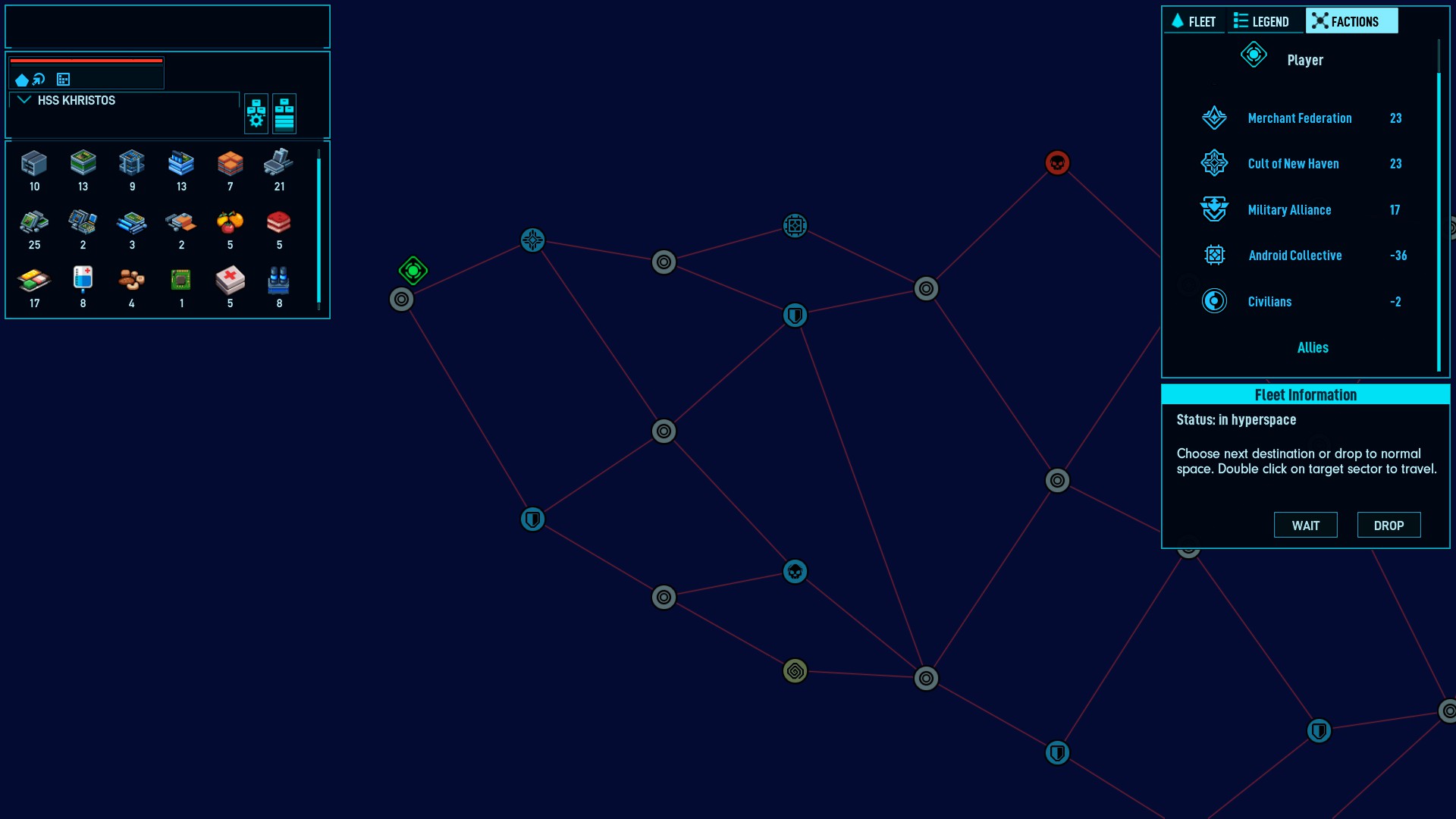 About a half-dozen factions await. The game’s design appears to potentially support some complex diplomacy mechanics.

This revelation killed any momentum that I had built with Space Haven on the spot, even after I had previously invested fifteen hours into the game. Characters leveling up throughout a playthrough is an implacable feature, because the larger a colony/ship—and Space Haven allows players to build at least two ships—the more efficient crew will need to be to self-sustain. Unfortunately, BugByte is prioritizing…uh…slavery mechanics…over stat increases/leveling up. I look forward to role-playing as a galactic Harriet Tubman, or a space-faring John Brown, but I need my crew to get better at weapons! 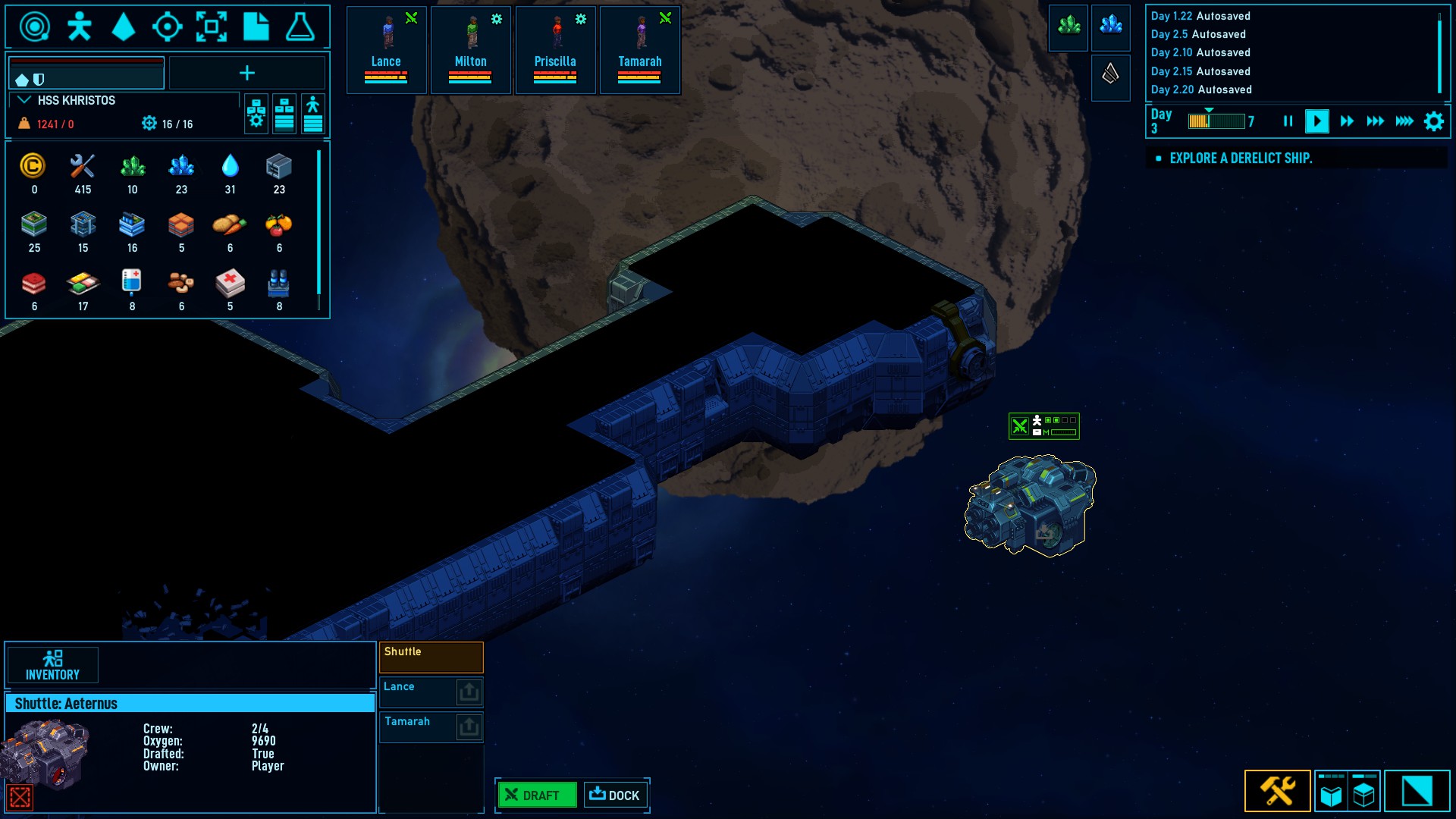 I could perform shuttle runs all day!

Once I learned that crew do not level-up, I stopped playing Space Haven. What BugByte has put together is not bad, and I enjoy deploying my shuttle for missions. But I demand efficiency, which means stat increases. There are several features in Space Haven that I have yet to experience, such as ship battles, raiding, and finding/exploring bases and hideouts, so there is plenty to do for those who do not mind their crew staying at level 1 for entire playthroughs. Personally, I’ll pause my playthrough until that has been addressed. In the meantime, I am hopeful that the developers push forward. I would not want them to end up like Gaslamp Games and Clockwork Empires.
Review copy generously provided by BugByte. 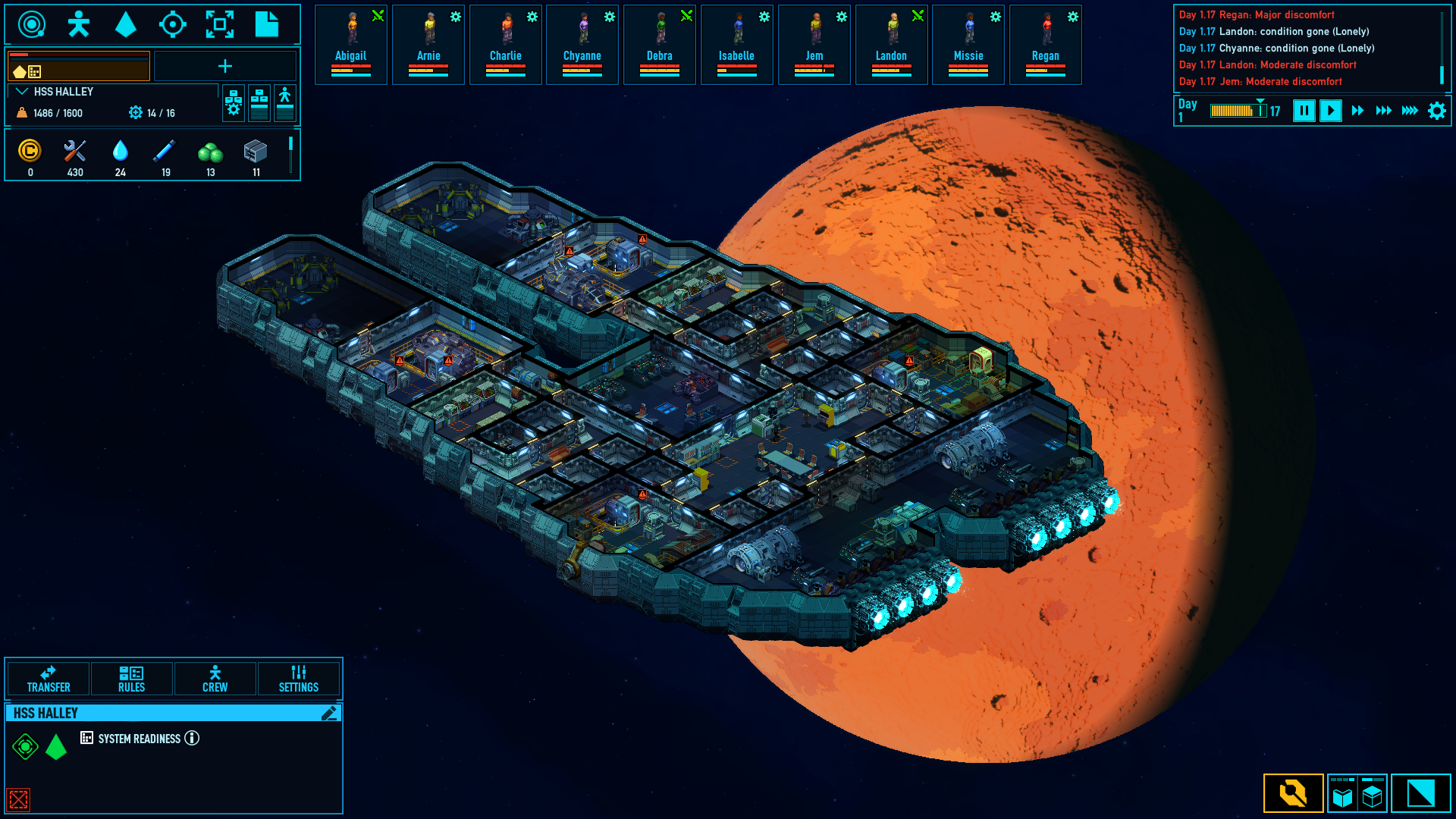 One day, I want to build something like this. Reminds me of a Bentusi ship from Homeworld.