Welcome to the punchline.

Disclaimer: World of Horror is inspired by Lovecraftian and Japanese horror fiction. There are many disturbing and graphic images depicting gore, mutilation, and paganistic material. Though the art is akin to 1-bit pixel art like in old PC-98 games, the details are elaborate and leave almost nothing to the imagination. I am not promoting the game as a form of spreading or establishing belief in such material, merely that it uses said material in an unapologetic and appropriate manner in regards to the gameplay. 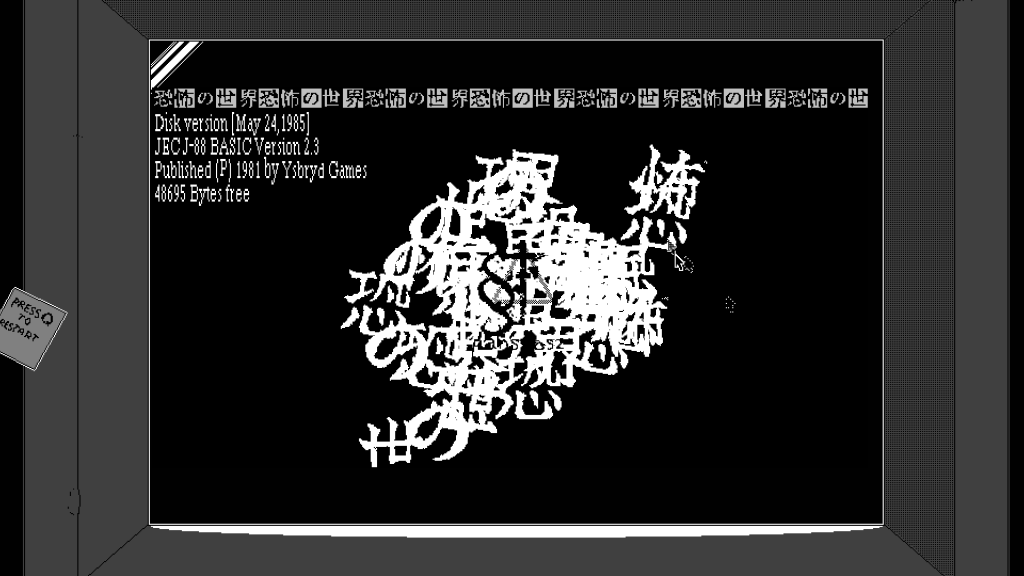 Is this a bug?

World of Horror is a cosmic-horror-inspired RPG made by the sole creator, Panstasz. It was first released as an alpha demo on itch.io and recently entered early access on Steam. You are pitted against The Old Gods as you try to protect your small, seaside town (and the world) from decaying sanity and the end of the world. No pressure. 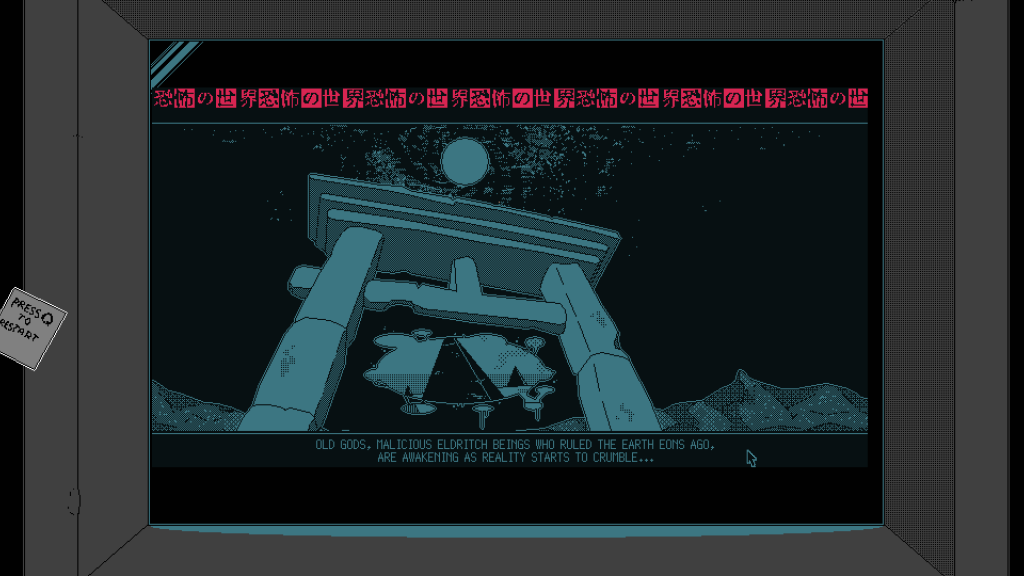 “Choose the form of The Destructor.”

World of Horror has been one of my most anticipated games of the year. The game follows a rogue-lite RPG structure where you are given a character with randomized stats and a skill or item. You must solve five random mysteries as you build up your character for the final encounter with one of The Old Gods. However, you must maintain your stamina (health) and reason (sanity). If either of these hits zero during your run your character dies or falls into insanity and you must start a new run. You also have a “DOOM” meter to prevent hitting 100% or the earth is destroyed. 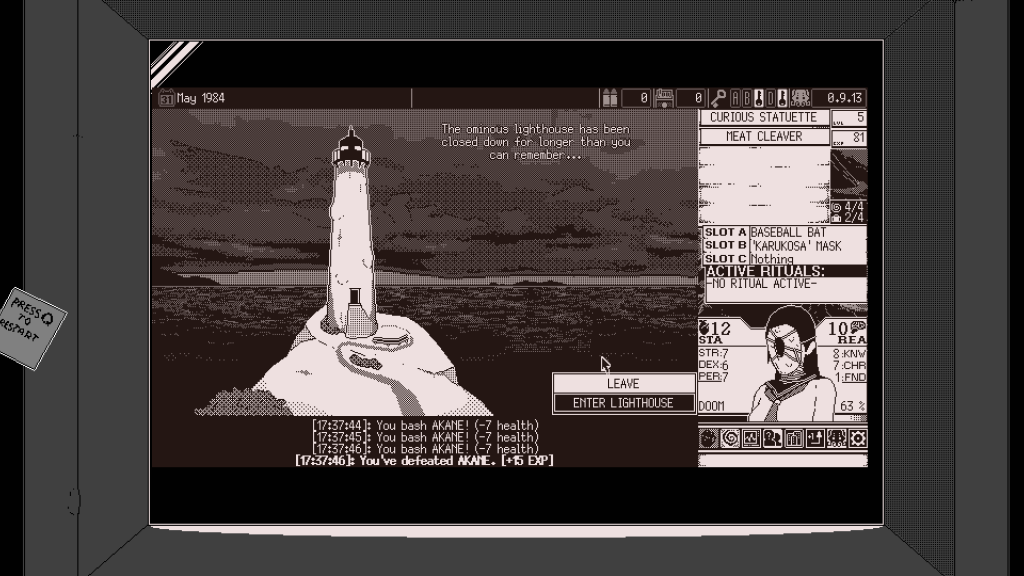 The lighthouse is your goal. How ironic.

World of Horror will punish you if you’re not careful. Several events during your playthrough will hit you with injuries, curses, and environmental hazards that will hamper your progress. It requires patience and thorough planning to reach the ending. 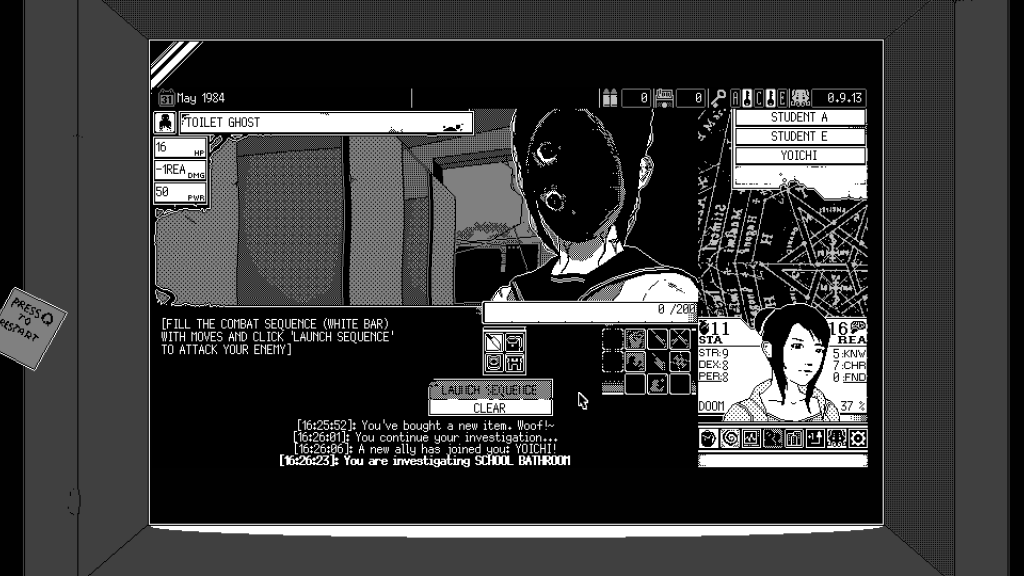 Even in the toilet, adversity awaits.

Combat is tough as well. All actions have a set percentage of success, some are decided by your stats while others depend on your equipment. Your actions are split into: offensive, defensive, support, spiritual, and miscellaneous. During my first playthrough, I struggled with the combat menu. You have so many options that you may feel overwhelmed. 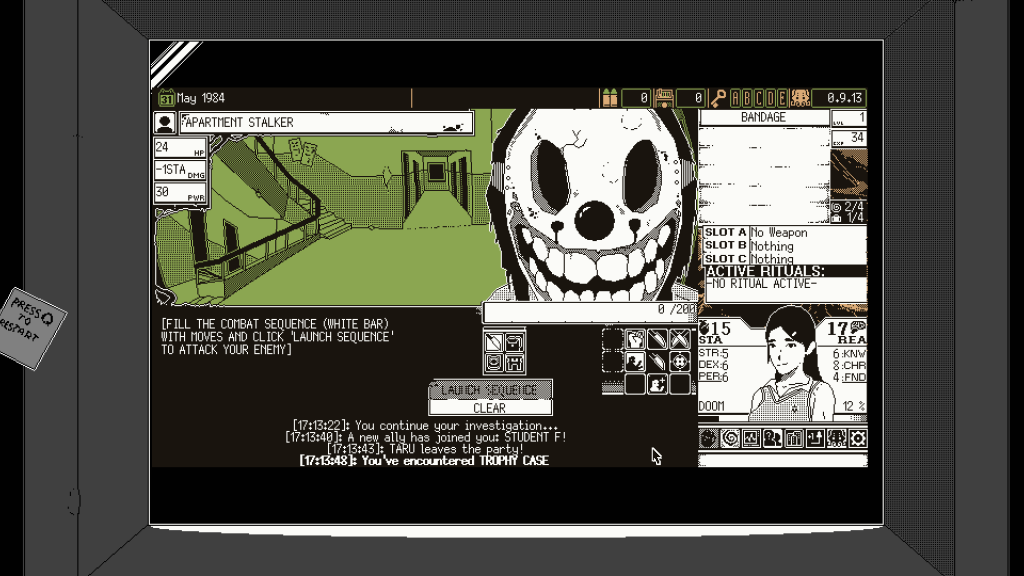 Not having a weapon doesn’t mean you’re sunk. Explore every option. You may find something to help you.

Some of the options are not very useful in the current build as well. Also, you have to manually select all your actions every time which quickly becomes tedious. However, the majority of your encounters are unique to each mystery, meaning prior knowledge of what weapons or actions work best for your playthrough can make encounters much shorter. 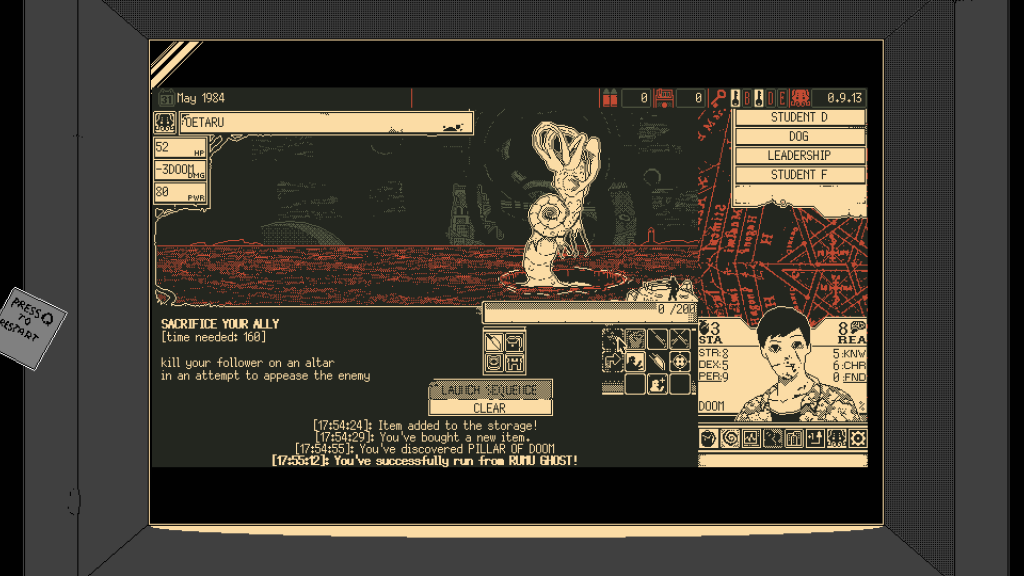 Okay, I know this looks bad but the dog had it coming.

The resource management is the most engaging part of the game. You have limited inventory of four items, possibly forcing you to rely on risky healing spells or the hospital which eats into your funds. Shops increase your DOOM just for entering, spells can require either your stamina, reason, or DOOM in order to cast them. Events can result in terrible luck or significant gains at reduced costs. 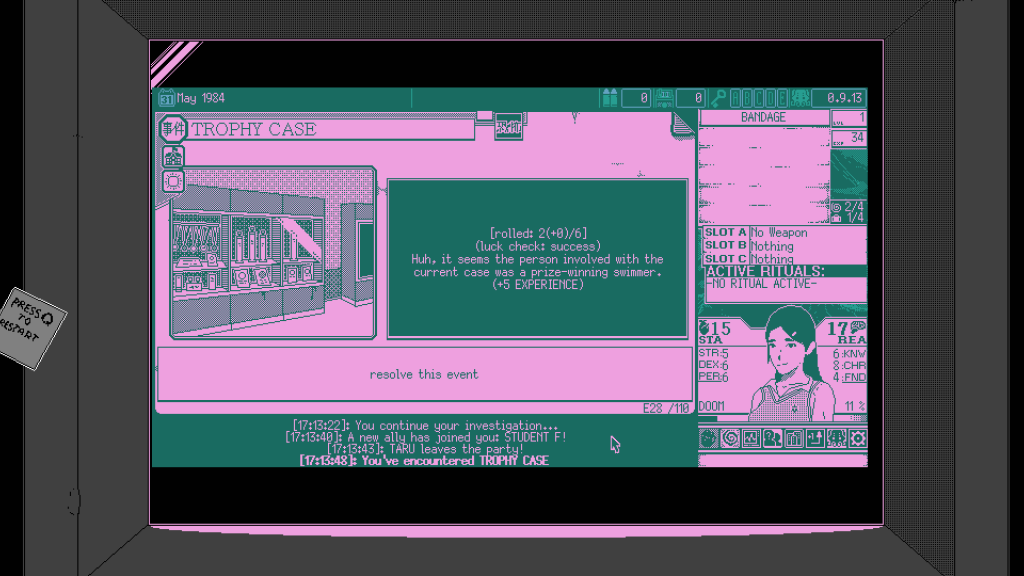 Apparently, luck was a factor in my ability to read a plaque…

You’re practically reliant on risking bad rolls for any benefit you can get. I must stress that managing your stamina/reason/DOOM is crucial and the game will take time to understand strategies for each mystery. It will be stressful, but after a few playthroughs, things will start to click in your head. 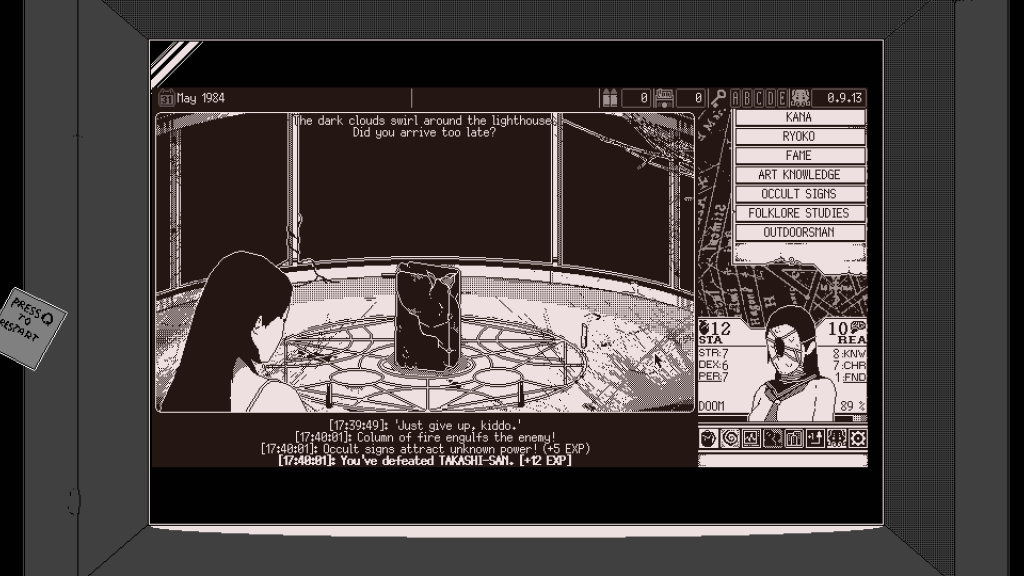 Though what awaits you at the end is still a mystery.

Whew, that was a lot to get through. Thankfully you’re not left to your own devices from the very start. World of Horror has one of the best progressive escalations in difficulty to ease the player into the gameplay standard. You can start by playing through one mystery that keeps your exploration to one area so you can learn about mystery conditions and how your actions can influence the ending of the mystery. After you feel comfortable enough, the next game gives you a set character with the same five mysteries and Old God conditions so you can then focus on exploration and resource management. After that is the standard game, everything is randomized and you can select a difficulty from Initiate to Cultist to True Believer, adjusting your starting stamina/reason and funds. Each character has their own stat makeup and start with certain advantages like an item that accomplishes a stat check or a spell. 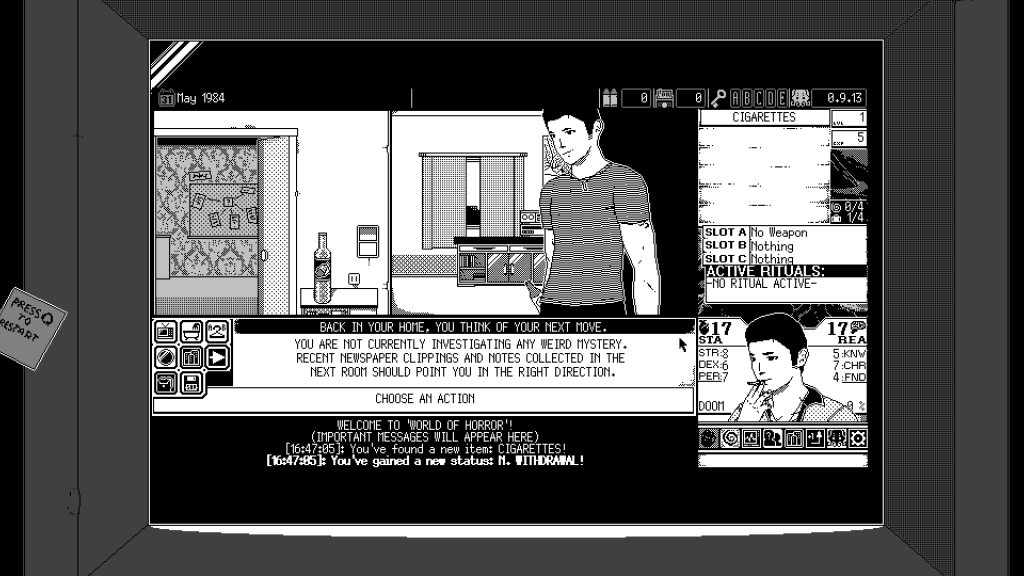 His stats may not seem much but his COOL is at max, I’m sure.

A couple of negatives I want to point out are the exploration and the amount of content. Exploration is possibly the most repetitive aspect of the game and due to almost half of the remaining story content missing, there are many actions and events that have no purpose yet or in-game bugs that break their intended effect. 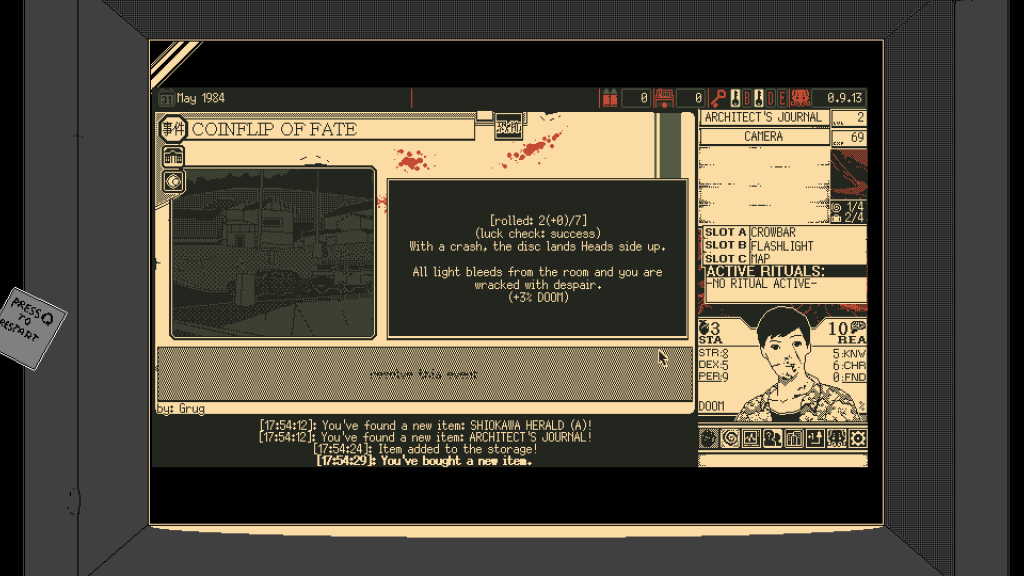 I think this is a bug. Then again, why would I trust an eldritch coin flip to be in my favor?

Hopefully after the full game comes out, Panstasz will make future content. On the plus side, modding capability was just added, allowing for more events, characters, and possibly extra story content to be added by other creatives to prolong the game’s longevity. Already getting chills at the prospects. 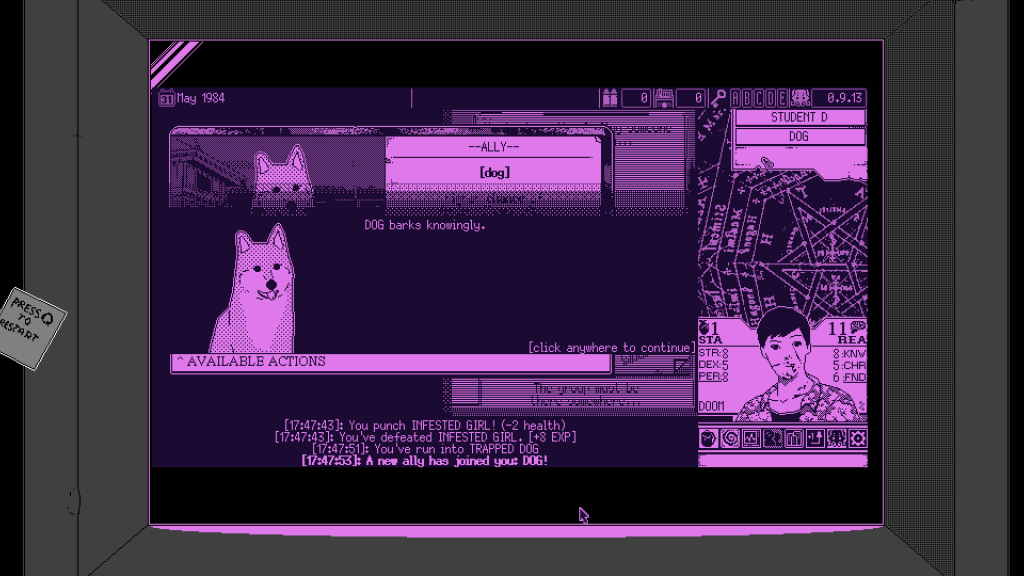 This dog is schemin’ for sure…

World of Horror’s simplistic yet clever game design and its beautifully surreal art offers an appealing gameplay loop similar to Oregon Trail, Darkest Dungeon, and even the Resident Evil series to a degree. The soundtrack has a chilling and subdued tone while offering some surprisingly catchy action songs, hearkening to the game’s PC-98 roots. The amount of visual customization is also really cool. Ranging from the nostalgic Game Boy yellow-green to the distinct stylings of a ZX Spectrum, there are a bevy of color customizations to choose from. Priced currently at $14.99, with 12 of the 20 base mysteries available to play, you’re getting a fairly substantial package for a small game like this with lots of potential and endless playthroughs. Hope you’re willing to brave the darkness and the unknown. World of Horror is currently available on Steam Early Access with plans of porting to PS4 and Nintendo Switch. There is also a demo available on the game’s web page. 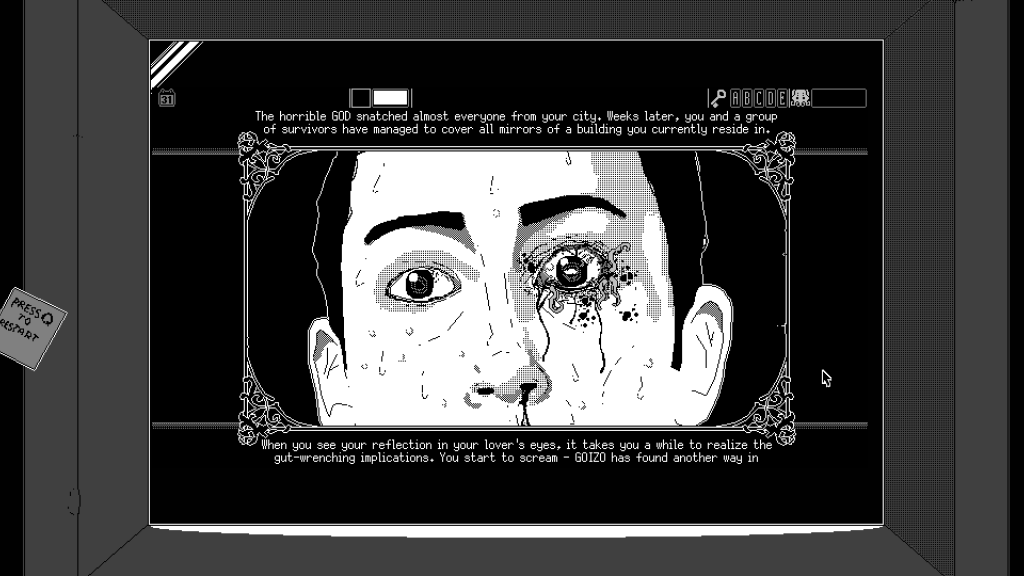 Be seeing you, friendo.