A Story Told Again and Again 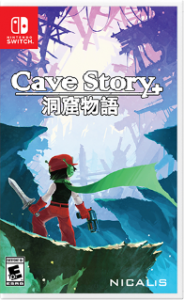 The year 2010 was an excellent year to be a kid. Toy Story 3 had just come out in theaters, and Bruno Mars’ Just The Way You Are was playing on the radio. The Wii was becoming more and more popular, and its Wii Shop Channel offered demos for the kids like me who wanted to play free games. My favorite demo was Cave Story, and it was the first time I had truly experienced indie greatness.

Now, 9 years later, Toy Story 4 is in theaters, I have long since stopped listening to the radio, and the Switch is reaching record-levels of popularity. It’s the perfect time for a retro review of Cave Story+!

Sorcery: There are trace amounts of witchcraft and sorcery displayed.

Undeath: The final bosses have potentially disturbing stages and appearances with undeath.

Adult Humor: While little more than an occasional gag, there are hidden suggestive inventory items, such as female undergarments and lipstick.

Since my childhood, I have played 3 different versions of Cave Story. The first was the Wii demo mentioned earlier. Then, when I was finally able to purchase a copy a few years later, I bought and finished the 3DS port. Today, I have the complete package on the Switch, with extras included. Is it worth playing in so many forms? Let’s start reviewing and find out. 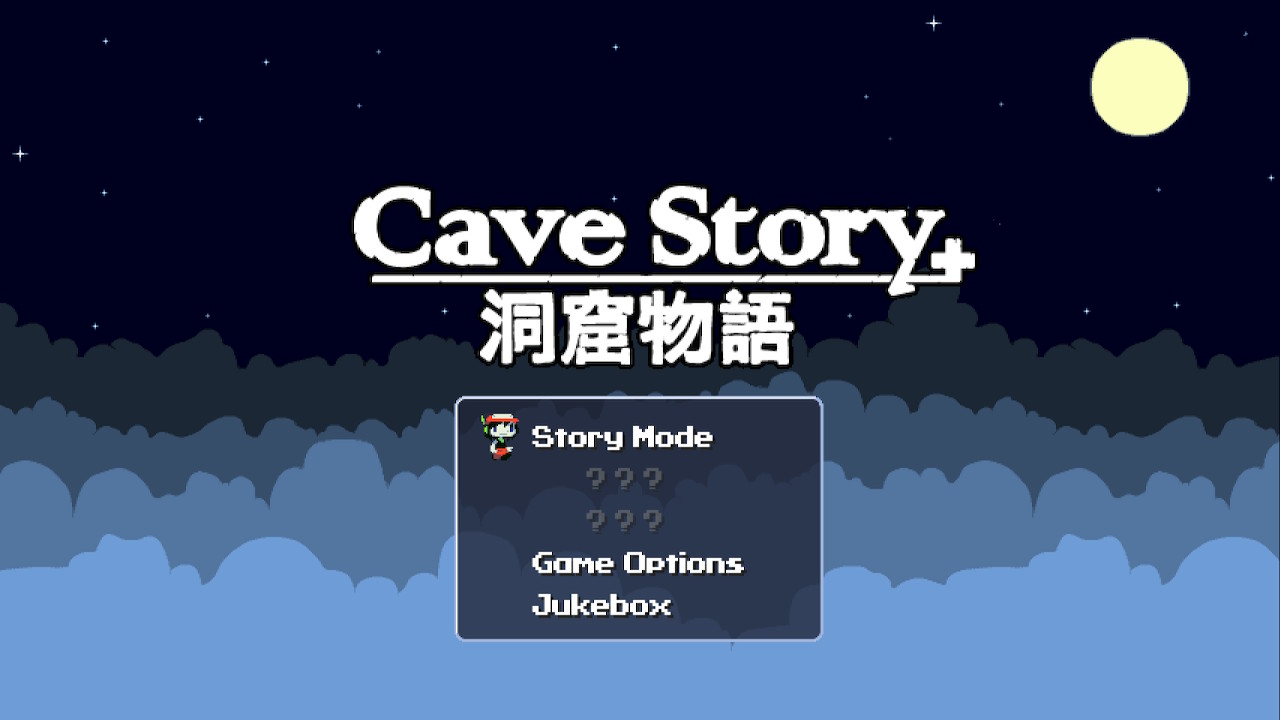 This beautiful background is the first thing you see upon starting the game.

Starting up the game, Cave Story+ takes no time in demonstrating its improvements over the original Cave Story. Directly from the startup, a remastered version of the original theme plays, and three options are given: play the story, look at the game options, or listen to the jukebox (of which there’s only one song at the beginning).

However, the settings are where a lot of Cave Story+‘s perks are already shown. There are now six different versions of the soundtrack, which all sound incredible (more on that later). Other outstanding settings include an optional graphics remaster and unlock notifications. 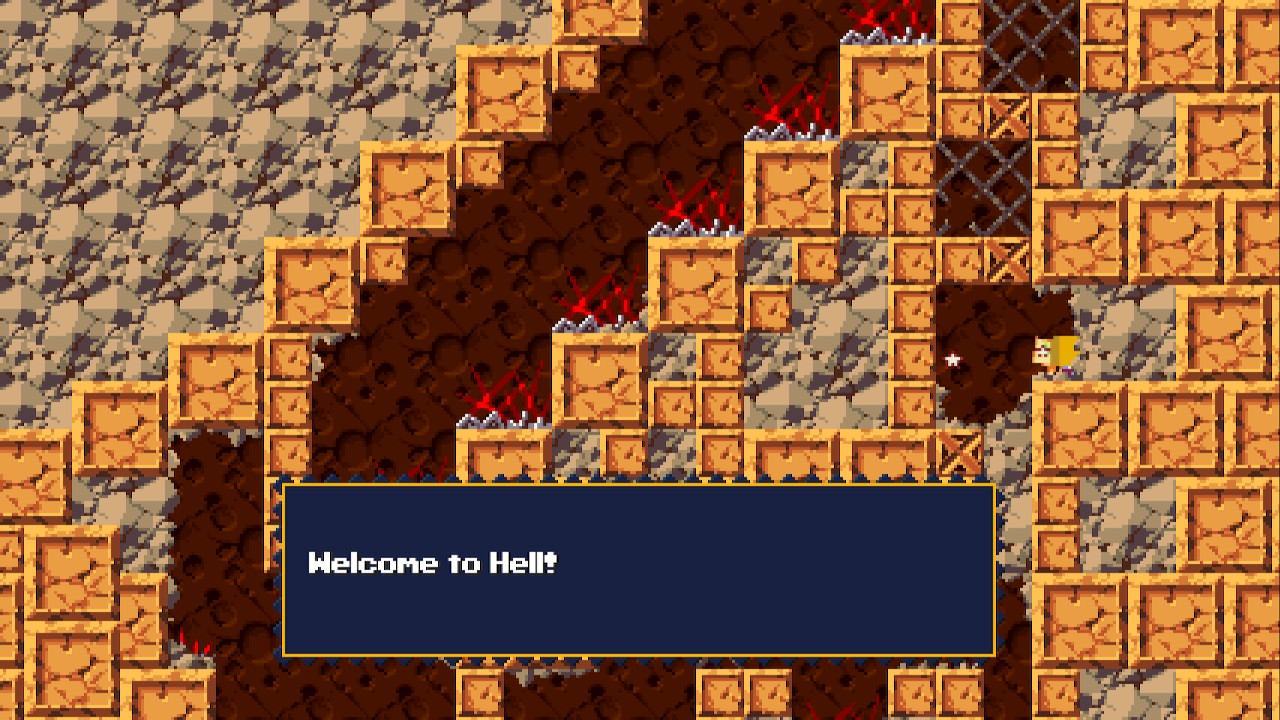 Even on it’s normal difficulty, Cave Story+ manages to be a challenging experience. While being more forgiving than many other titles at platforming, it’s still very possible to die right off the bat, running into some spikes and instantly dying. N00bs beware!

After playing a few levels and gaining some experience, the challenge becomes adaptable; difficulty is based on little more than user error, so the better you get at memorizing certain pitfalls, the easier the game becomes. Even so, sometimes, it requires thinking outside the box! 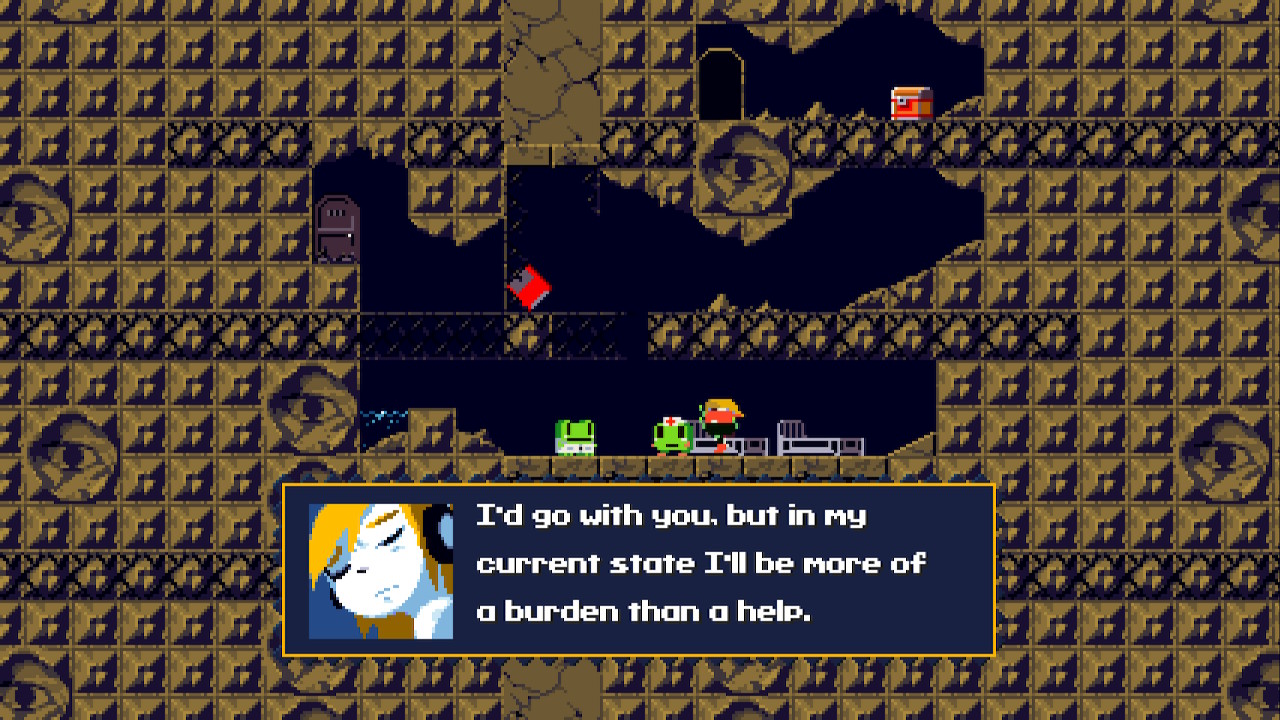 Never forget to find Curly and save her (multiple times), or no Best Ending for you!

So Much to Re-Experience!

One of Cave Story‘s marks of genius is in its replayability. It has several different endings, and many items easily overlooked. While missing an item never feels good for a completionist like myself, it’s never too tragic of a loss, as Cave Story‘s campaign is just short enough to replay without needing an extended break. Cave Story+‘s additional settings only add to the replayability as well.

That being said, I can only take so much of playing the same levels over and over again. There are some particularly egregious backtracking segments (Sandlands, ahem) that, while fine on the first playthough, become burdensome upon a replay.

Lastly, The Best Ending is both a blessing and a curse. There are several very elusive moments and items that, if missed, will automatically lock you out of the best ending sequence, with no way of going back after saving. Unlocking the best ending ultimately boils down to the following three rules: babysit Curly (as much as possible), search EVERY area thoroughly, and don’t follow your instincts outside of combat. Sounds easy… right?

If you manage to jump through all of the loops required for the best ending, you will be treated to the Bloodstained Sanctuary level (hardest and best in the story), and the final boss Ballos, along with some super-satisfying lore, unlockables, and endgame credits.

Even after beating the game a handful of times over the years, it still took me three extra playthroughs to get the best ending. THANKS A LOT, CURLY!

More Weapons Than You Can Shake a Sword At

One of my favorite aspects about Cave Story is its weapon system. Unlike any other game I’m aware of, Cave Story‘s weapon system also depends on your skill. You need to gather experience to upgrade your weapon, but if you take enough damage, your weapon will lose XP and go back to level 1 out of 3.

There are 9 available weapons throughout the game, but only 5 can be held at one time. This means that according to your choices, you can, and will, miss out on other weapon options, depending on which “ultimate” weapon you chose. My personal favorites are the Spur (the best weapon in the game), and the Blade, which gets thrown like a tomahawk and is very powerful, both emotionally and physically. 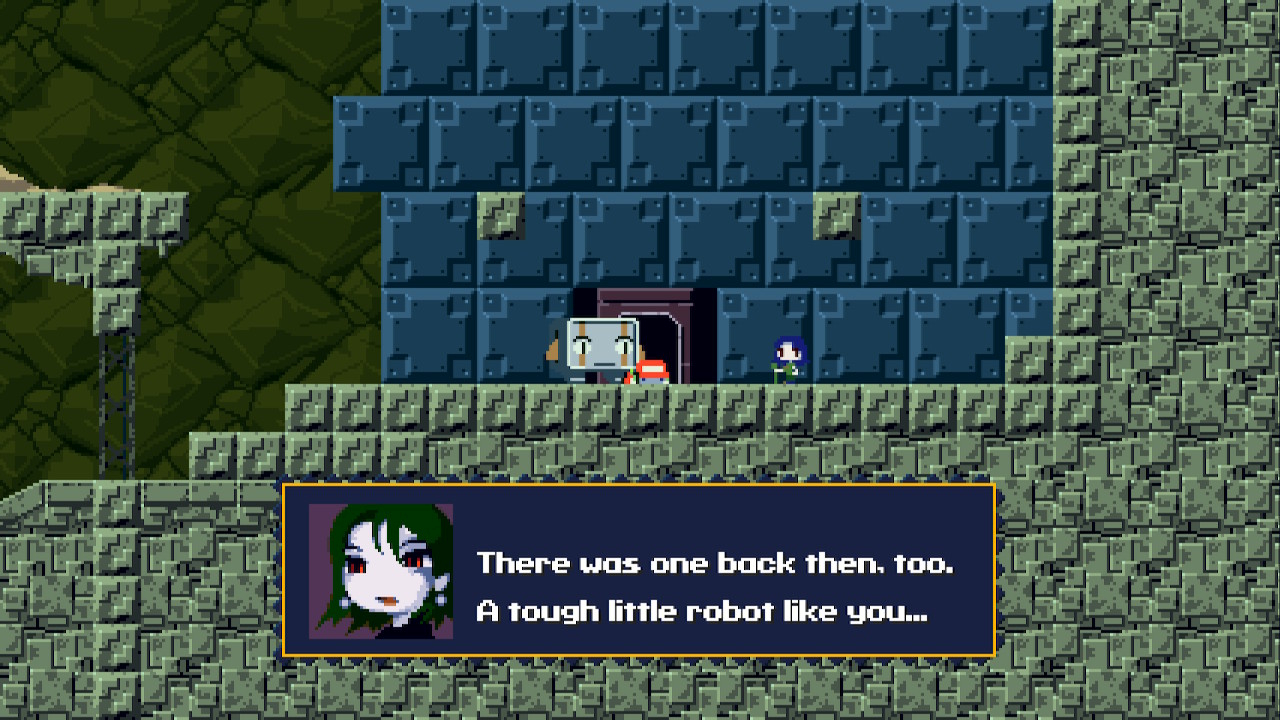 When these two baddies show up, one of Cave Story’s most memorable songs starts playing. It’s especially awesome in Ridiculon!

Cave Story‘s soundtrack is…amazing. While my favorite track will always be the game’s theme, there are a myriad of songs that are spectacularly well done and match each environment nicely. Just made a difficult choice and are now looking up at the moon and stars? Cue a slow song that makes you reminiscent of the hardships you’ve endured. Just been teleported to a Grassland full of froggy enemies? Cue a fun, bouncy, energetic beat as you fight your way through. And the list goes on.

With Cave Story+‘s remade soundtracks, these sounds never grow old (as I’m writing this, I’m still listening to the OST Jukebox on my Switch). My personal favorites include the “Famitrack” mode, which is the original that sounds like it’s straight out of an NES game, and “Ridiculon,” which is a rock remake for the “metal” in me. With the different soundtracks combined with the alternate graphic mode, Cave Story+ can feel like a brand-new game for even the hardest of Cave Story veterans. 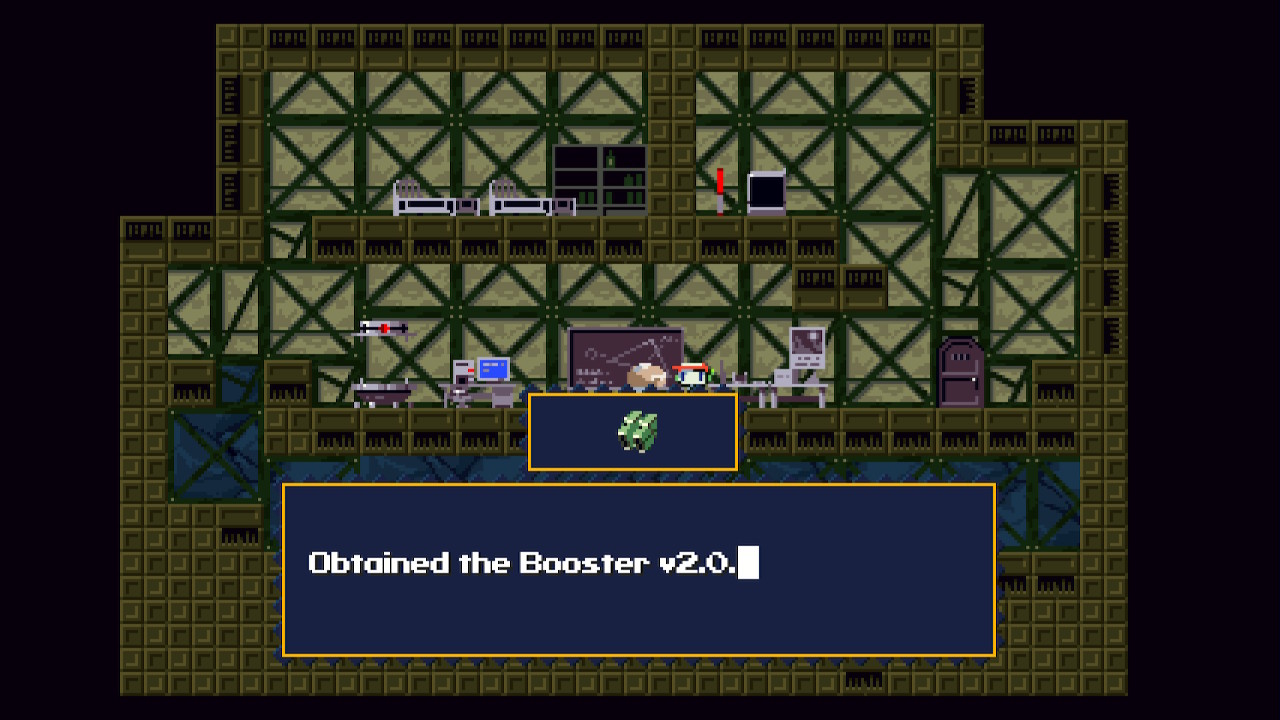 Even with the treasures that are Cave Story‘s combat and music, my favorite feature is still in its platforming. This is for one reason: the boosters. Boosters are similar to double-jumps and air-dashes of other games, but can do them at the same time, allowing you to “skrrrt” basically anywhere you wish, in all 4 directions.

Regardless of the mobility that the booster grants the player, many challenges are also formed from it later on in the game. The last cave, for example, has a lava pool that requires you to time your jump and boost, in order to fly straight and avoid spikes on the roof. These challenges are intuitive, and so satisfying to pull off.

Just make sure you get the right booster…

Cave Story+ is great. With a short but memorable story, loads of customization, satisfying and challenging gameplay, and an amazing soundtrack, it’s an experience all metroidvania lovers need to have at least once. With Steam sales on PC and a price tag 10 dollars less than other Switch games, it’s also a title with little excuse not to enjoy. So get this game, and let it tell you it’s story: again, and again, and again. 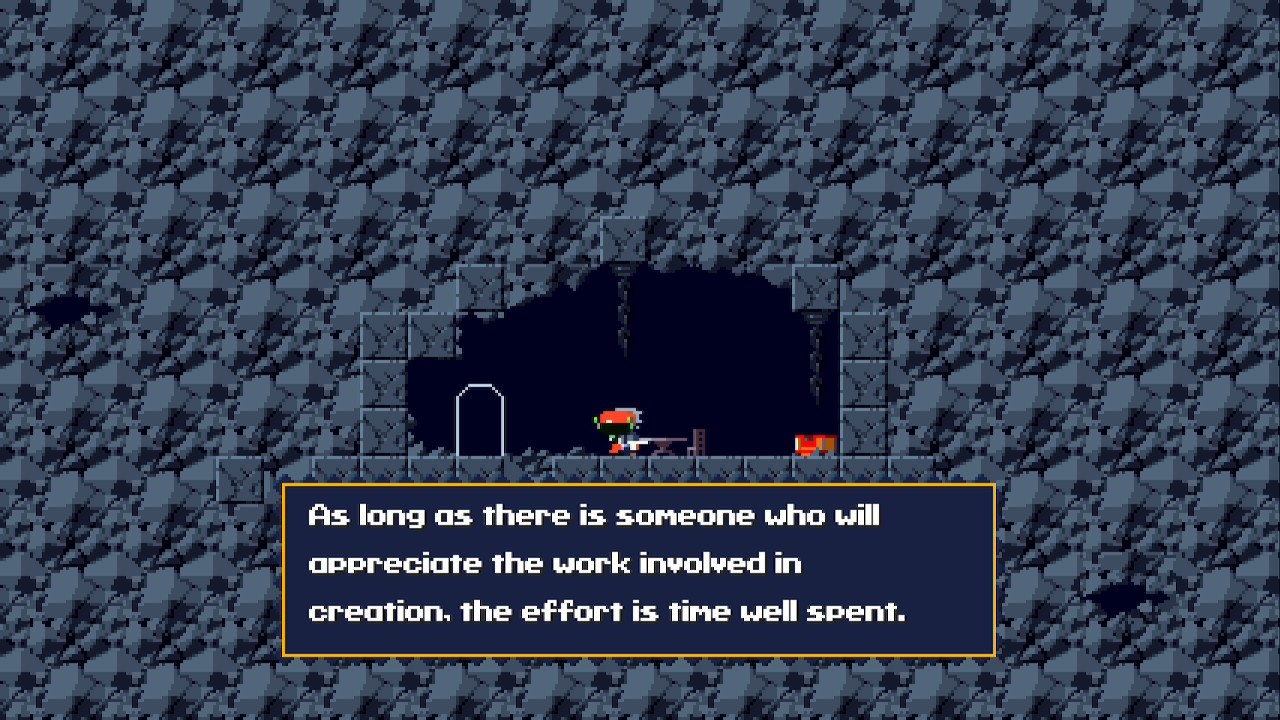 You said it, old man!

The fact that I can only come up with one negative point for Cave Story+ speaks volumes for it's worth: it's charming, fun, and is a story worth playing over and over again.