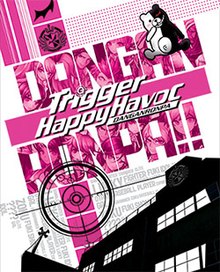 It seems nearly any concept that comes out of Japan can gain a nerd following in the West, regardless of how outlandish it is. Perhaps one of the most telling examples of this is the Danganronpa franchise. Once a Japanese exclusive title, an online playthrough of a fan translation resulted in an explosion of popularity. As the story goes, this sudden publicity prompted the development of an official English localization, forever immortalizing the power of fandom.

That the Danganronpa series has been successful is irrefutable. With four games, several anime, and a variety of spin offs into other media, the franchise clearly built up a momentum. But with the smash success of the second title and the divisive nature of V3, the original can easily be forgotten. Being so critical to the beginning of the series, has it stood the test of time? Does it hold up in comparison to everything that came later?

Spiritual Content: One character’s talent is fortune telling. It’s played for laughs, however, and heavily implied he has no actual supernatural abilities.

Violence: This is a murder mystery game with multiple cases, so there will be lots of death. The villain actively encourages murder on a regular basis. There are graphic murder scenes, and while blood is pink, it is still clearly blood. Culprits are executed in often gruesome ways once they are exposed.

Language/Crude Humor: Several characters make sexual references for comedic effect. Characters use swears such as sh**, d***, b****, and h***.

Positive Content: Danganronpa frequently emphasizes the value of friendship and working together. The protagonist shows an admirable sympathy and certain amount of forgiveness to those found guilty in a Class Trial. Characters show a willingness to give their own lives to protect and save others. Finding hope to get through bad situations is a major theme of the game overall.

Danganronpa puts you in the sneakers of Makoto Naegi, an ordinary boy who through sheer luck gets to attend a school for the extraordinary. What starts out as the premise for a high school coming of age story soon turns dark, however. Makoto and all the students in his class black out and awaken to find themselves locked into the first floor of the their now abandoned school. Their captor – a psychotic teddy bear called Monokuma – gives them simple instructions: if someone wants to escape, they must kill a fellow student. 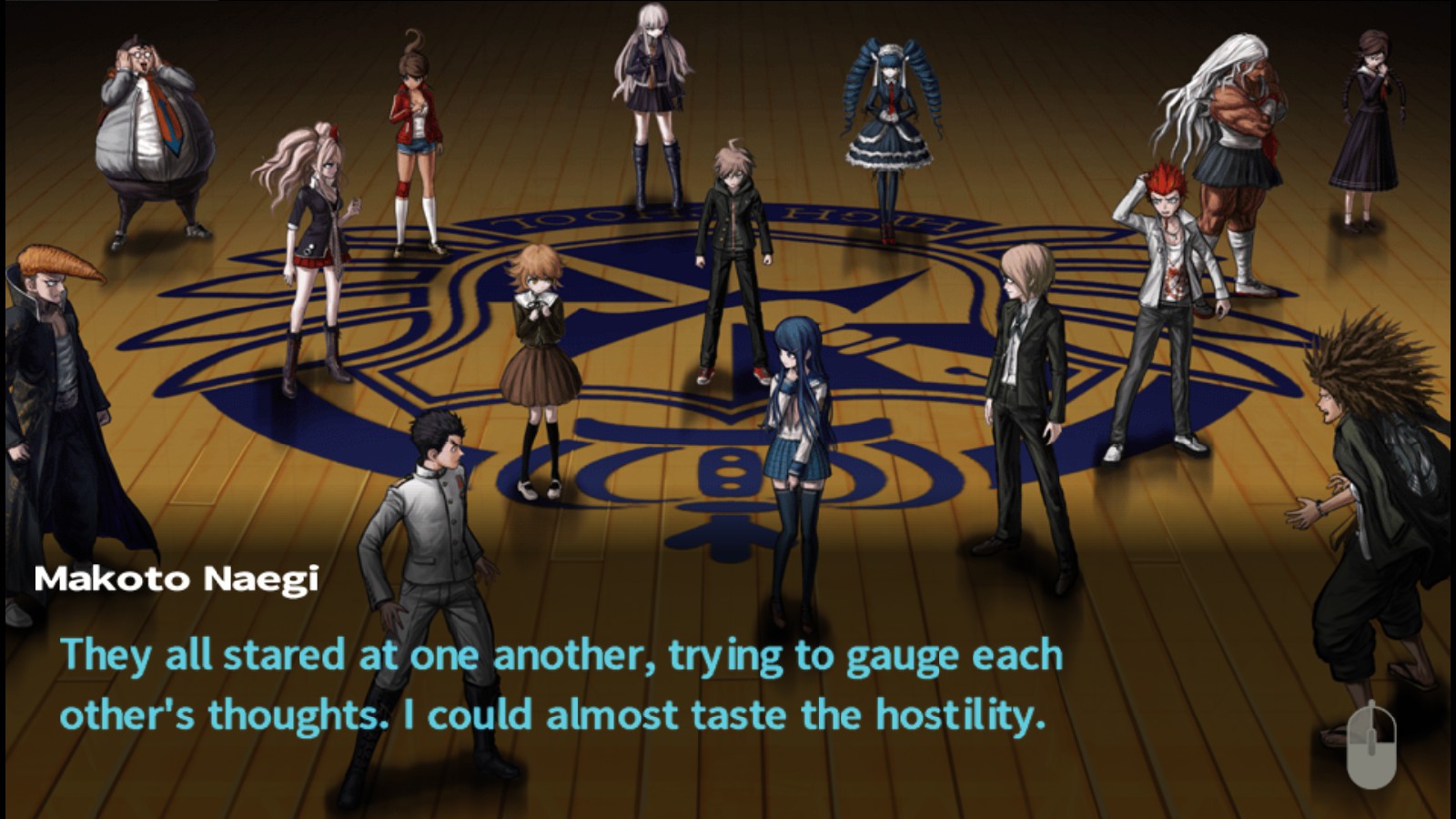 The tension is palpable from very early on.

As far as plot goes, it’s an effective set up. Effective enough to become the formula for several games to come, at least. In this first installment of the franchise though, there is something about the unknown that makes it stand out. Everything about the situation feels new and mysterious. The students are left to grapple with several questions that have no immediately obvious answers. Who could have abducted them? How could they have commandeered the entire school? Why is the mastermind forcing them into this killing game? The specter of the unknown continuously hovers over everything as they search for answers. 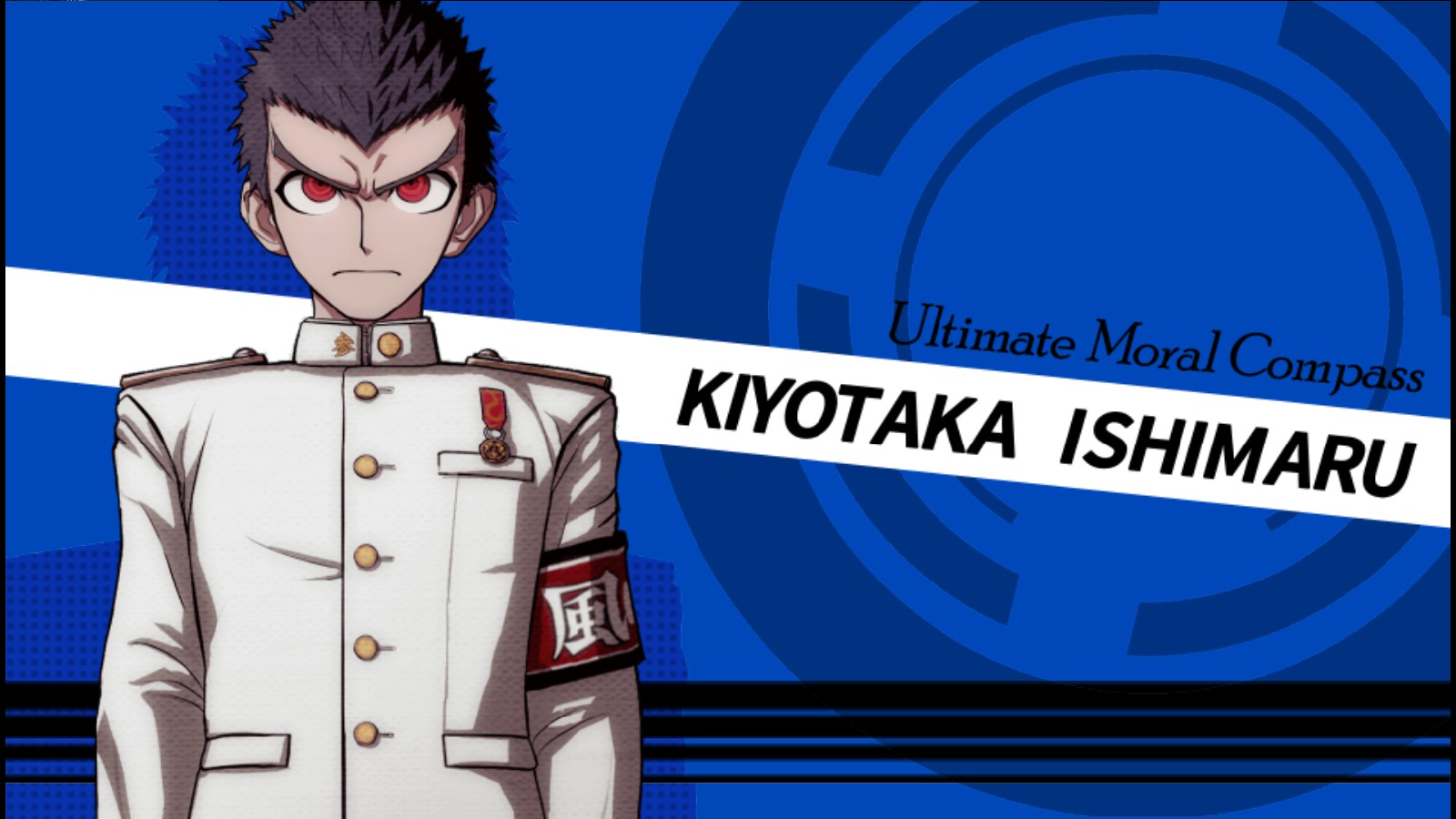 Each student has a different theme that helps them stand out.

But that doesn’t mean the tone of the game is continuously dark. In fact, for large stretches of the game, things can seem very lighthearted. These sections — termed Daily Life — can feel like a dating sim of sorts. It mostly involves growing closer to your classmates, learning what sort of responses and gifts will elicit a positive reaction. It’s certainly possible to criticize the game for muddying the thematic waters like this. However, the juxtaposition of the visual novel fun with the serious situation works well. 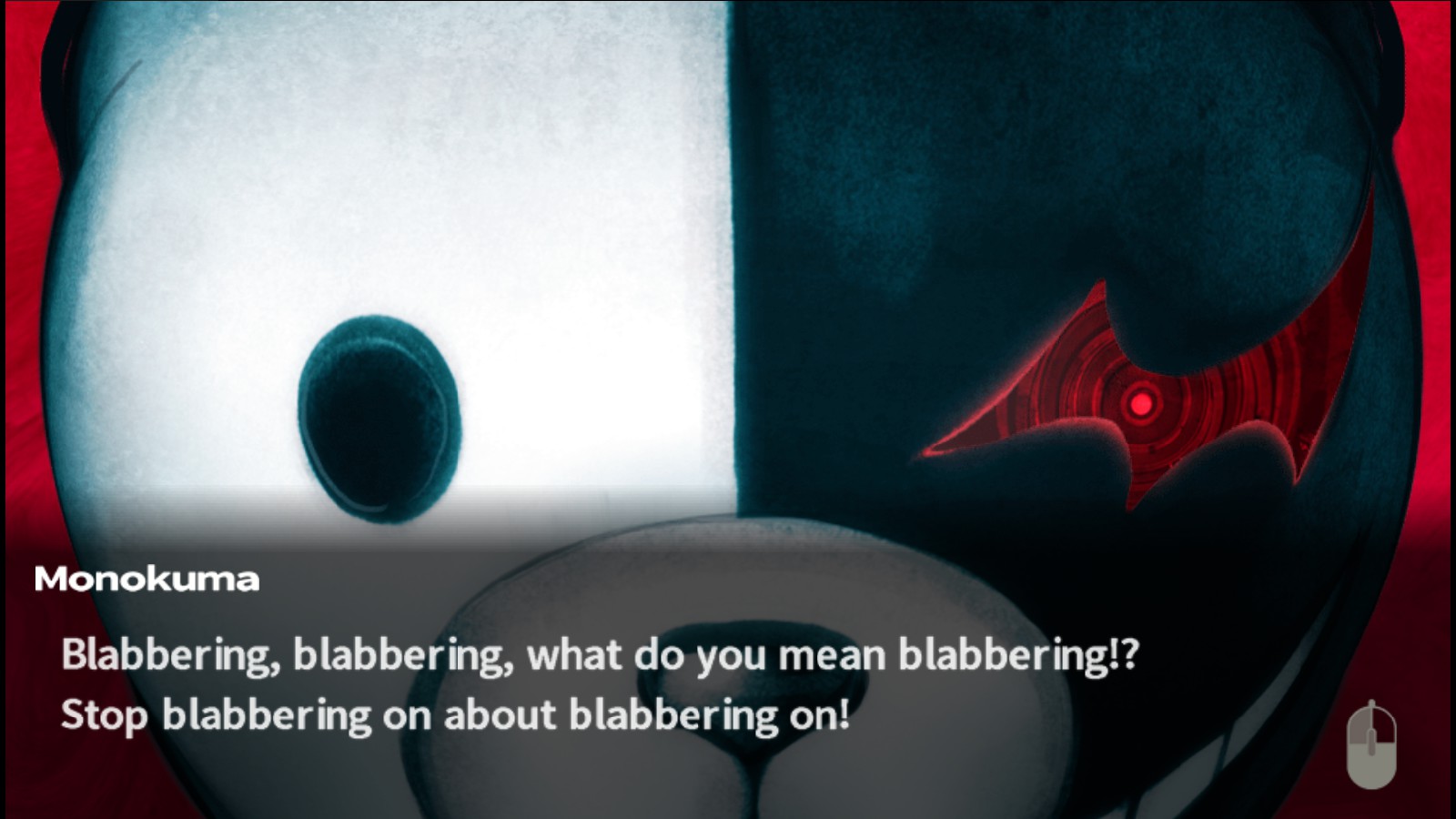 You will come to dread and loath this silly teddie bear.

When the fun is shattered by the discovery of a murder, it is both shocking and horrifying. The corpse isn’t a faceless victim; it’s a friend you’ve spent time with and grown attached to. And you must contend with the chilling knowledge that their killer is a classmate as well. Not some evil monster, but a child driven to a terrible choice by a horrible situation. It’s the emotional whiplash you get when the game goes from lighthearted to horrific, from hopeful to despair-filled, that marked Danganronpa as something special.

After someone commits a murder, the game shifts gears and enters into Deadly Life. You must investigate the murder scene and any other relevant sites across the school in a point-and-click interface. After you gather sufficient evidence, you enter into the other staple of the Danganronpa series, the Class Trial. This segment bears more than a little similarity to the Phoenix Wright series. You point out contradictions and present evidence to reach the truth. However, rather than simply reading text and selecting buttons, you have to complete various action mini-games. In the most frequently occurring one, you’ll use the truth like a bullet, shooting false statements down as they fly by. Coupled with an absolutely awesome soundtrack, this ensures that the game is never boring even while it’s making you engage your critical thinking. 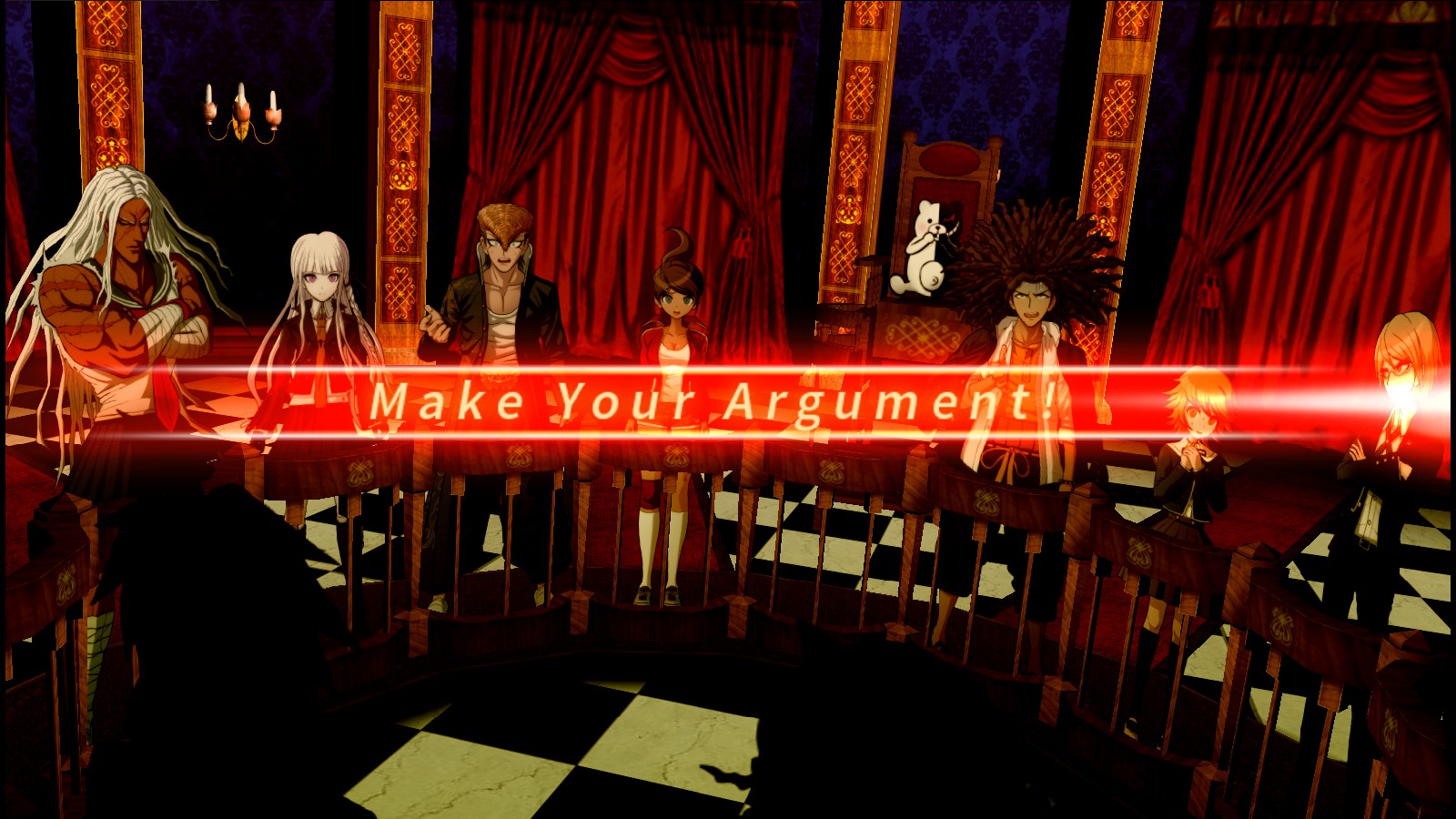 You’ll have to use logic and skill to sleuth out the killer in your midst.

Despite the action gameplay, Danganronpa is still primarily a visual novel. Thus it lives and dies by its story and characters. The cast list is sizable. The game introduces you to 16 different characters in short order, including Makoto himself and the main villain, Monokuma. While that may seem overwhelming, each character’s design is extremely distinct, both visually and in behavior. The voice actors in both the Japanese and English dubs give solid performances. You will never wonder who a character is the moment you look at them or hear their voice. 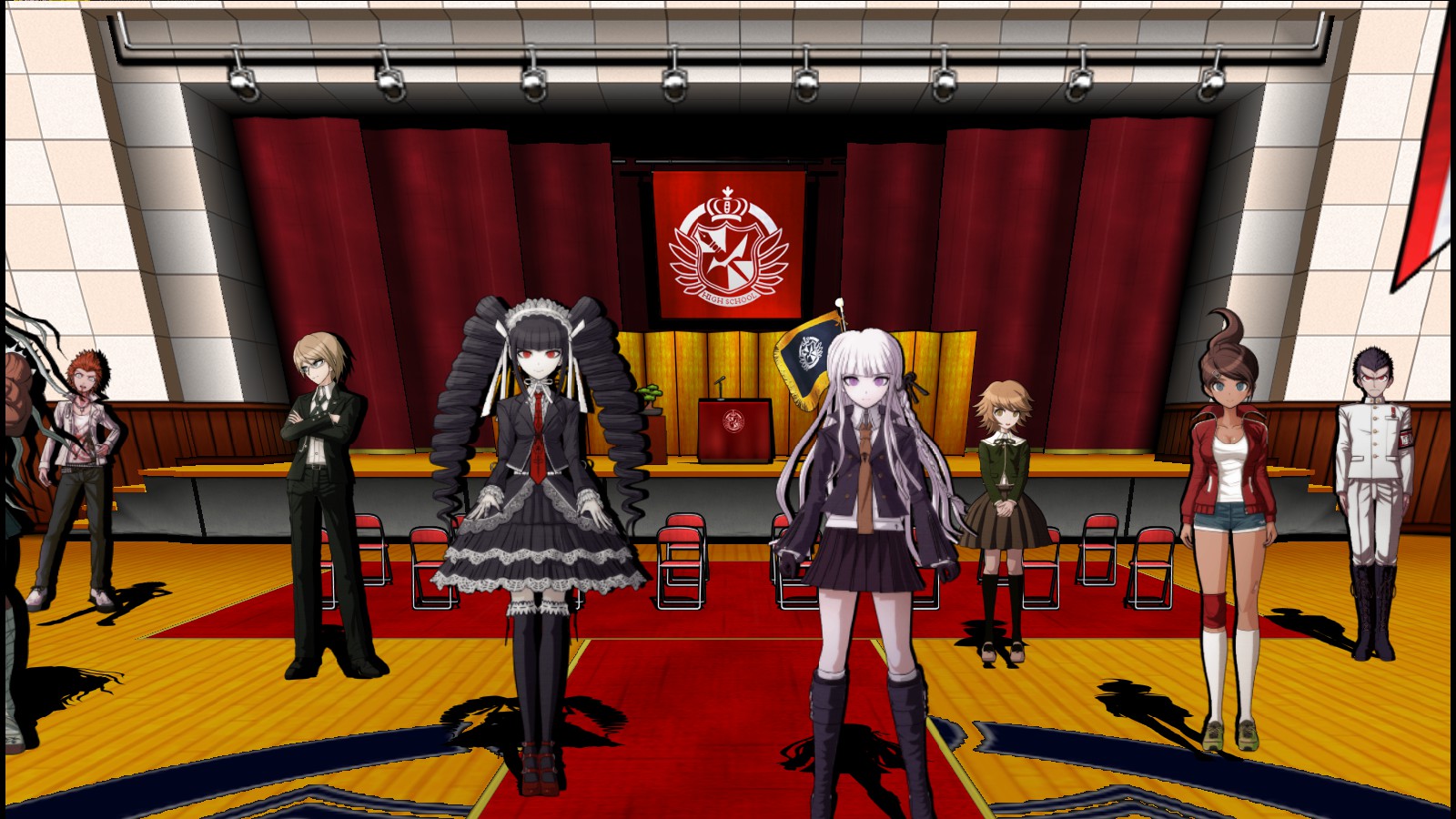 Everyone here is their own unique character, no generic victims or villains to be found.

If there is a weak link among these characters, it is unfortunately Makoto himself. He straddles that odd line between an actual character and featureless protagonist. The result: Makoto comes across as very bland in comparison to the exaggerated personalities that surround him. On that note, while many of the characters have a surprising depth to them, it is often hidden in their optional hangout events during Daily Life. Later games in the series do a better job at hinting to there being more to the characters than meets the eye. But for Trigger Happy Havoc, it is easy to dismiss many as being simple anime stereotypes. 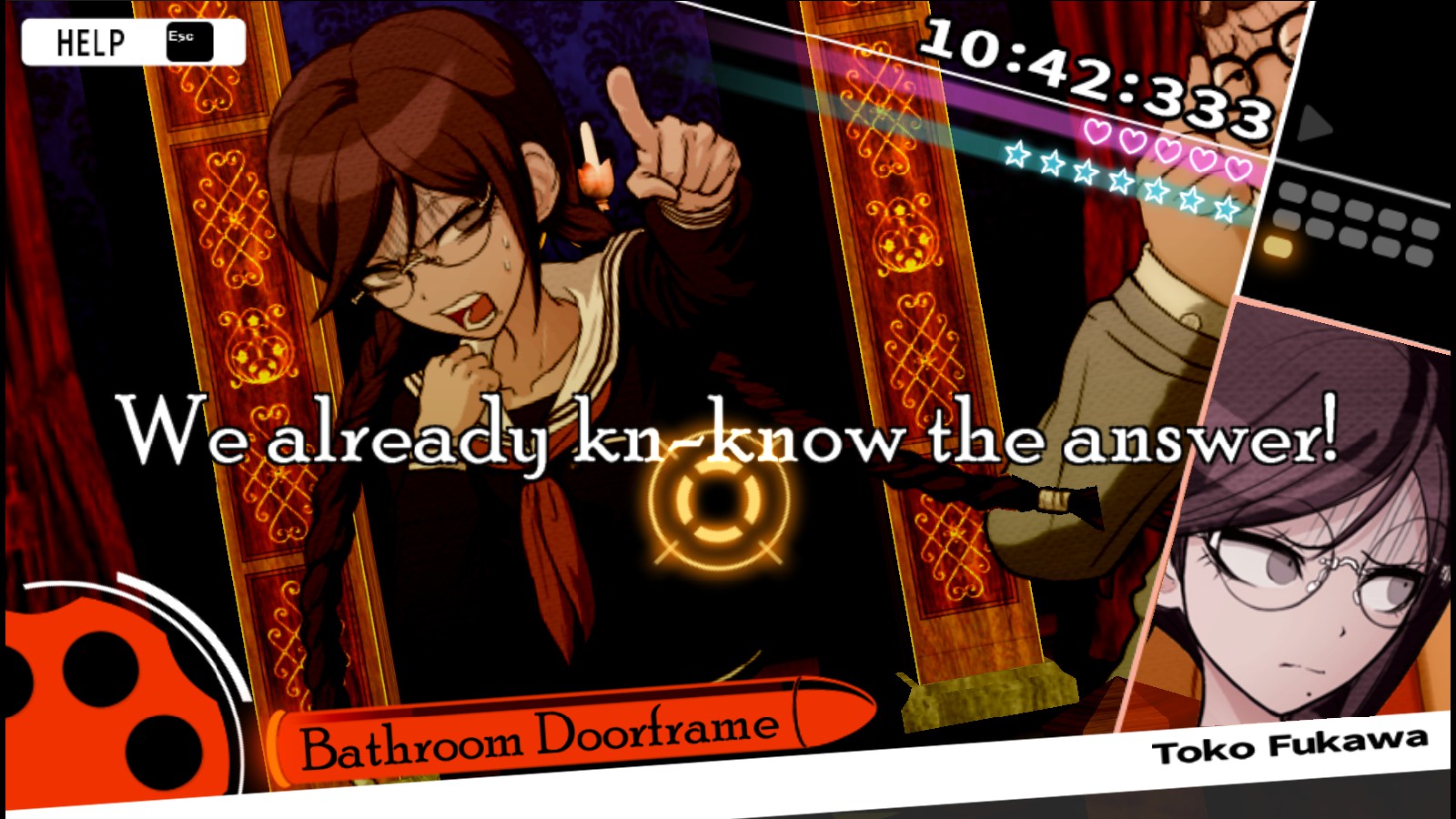 Tensions can fly pretty high in the middle of a Class Trial.

As far as gameplay, there are a few rough edges as well. One of the most notable is the Re:action feature, which allows you to select a highlighted bit of dialogue when you’re talking to someone outside of a Class Trial and question them about it. This doesn’t add anything to the game, as dialogue will just loop until you’ve selected the option. It seems like a transparent attempt to create the illusion of choice. Which brings up another potential issue with the series as a whole — linearity. As with many visual novels and mystery games, there is only one path to follow with very limited deviations. 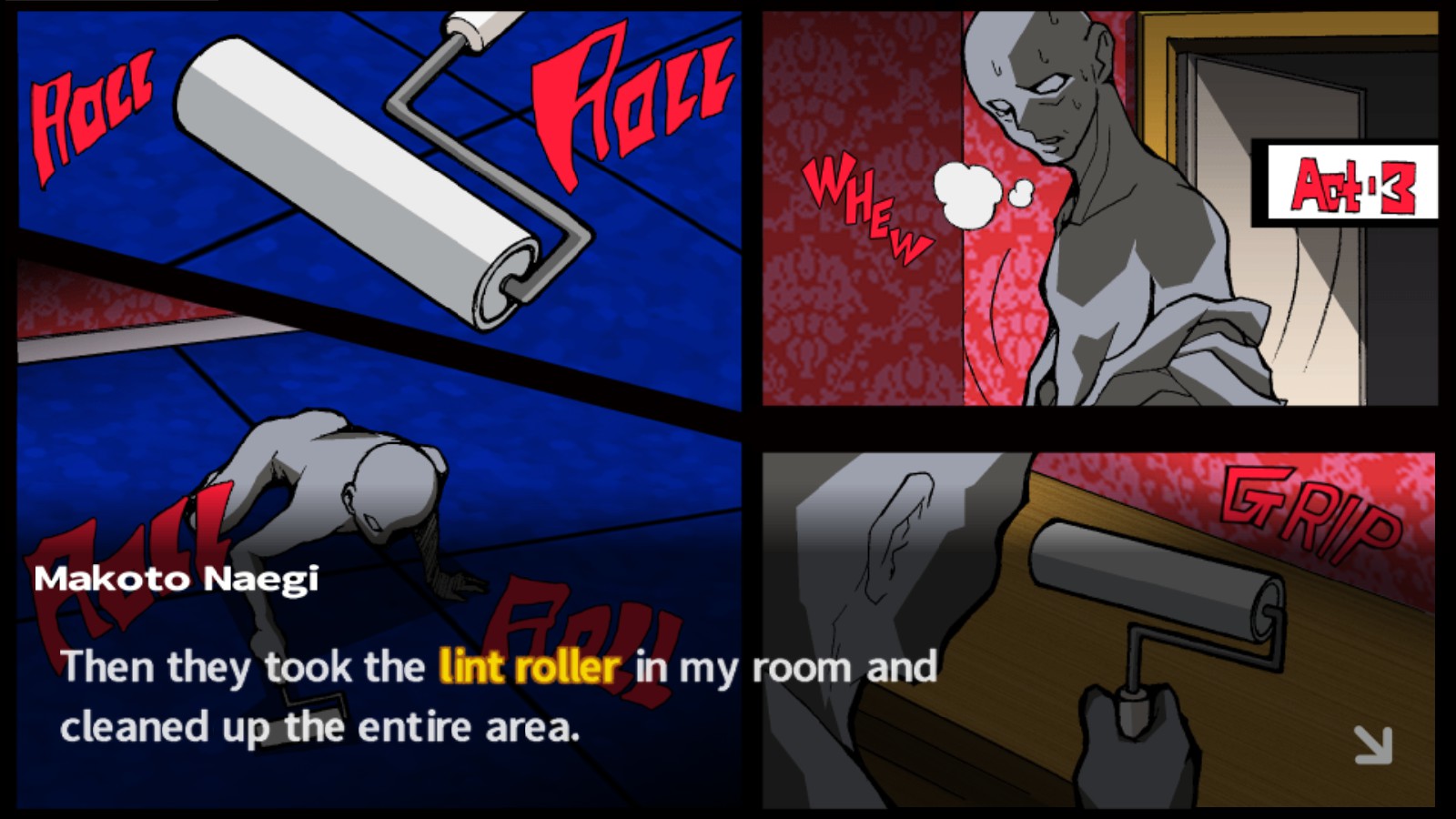 Summing up the whole case in a manga-style closing argument.

Overall, Danganronpa: Trigger Happy Havoc can seem like an unpolished gem in some spots, but it is a gem all the same. And these few spots are not anywhere near enough to take away from the general experience. Even apart from the series it spawned, Trigger Happy Havoc stands as a solid game in its own right. Anyone who enjoys mystery games or dark stories that make you question just how good you or anyone else really are, should give this title a shot.

While it may lack the polish of later entries into the series, Danganronpa: Trigger Happy Havoc is still a solid game in its own right. Any fan of murder mysteries and darker anime should check this game out. They will likely find something they enjoy.