When people hear “Naughty Dog”, their minds likely go first to The Last of Us and Uncharted franchises which have become some of the most memorable and talked about games of the PlayStation 3 and PlayStation 4. While Naughty Dog today is known for its gritty third-person shooters, the foundation of the company was built on action platformers in the vein of Mario and Sonic. Naughty Dog truly came to prominence in the late ’90s with the original Crash Bandicoot games released on the PlayStation 1. Crash Bandicoot quickly became not only an iconic mascot of the PlayStation 1, but also one of the most iconic characters in gaming.

Violence: Jak defeats enemies with punching, kicking, and shooting fireballs from his hands. When enemies are defeated, they disappear in a puff of smoke and leave behind green orbs that replenish Jak’s health.

Language: Characters use “butt” and “crap” a couple of times.

Sexual Content: Keira wears a crop-top that shows midriff, and Maya wears a low-cut outfit. Daxter makes several hilariously clumsy attempts to flirt with Keira despite being what amounts to a giant weasel.

Alcohol/Drug Use: A hillbilly carries a big jug of what can be assumed to be moonshine.

Spiritual Content: Jak uses a mystical energy source called “Eco” to heal and to activate various abilities. Dark Eco is shown to be a corrupting force that transforms and twists characters who are exposed to it.

Positive Themes: Jak and Daxter have a strong brotherly dynamic that is the heart of the game’s story. The ending presents the theme of giving up on your own goals for the sake of saving others. 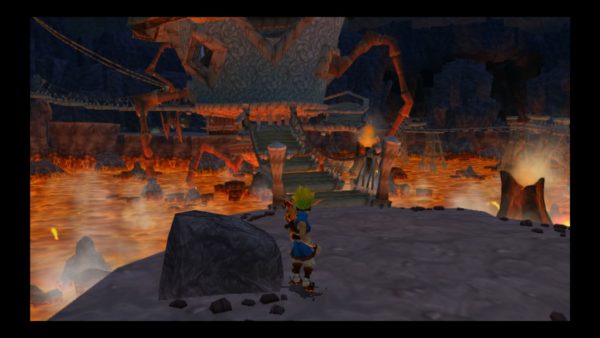 The story of Jak and Daxter is pretty simple but endearing. A foolish trip by Jak and Daxter to the forbidden Misty Island causes Daxter to fall into Dark Eco, which transforms him into a large orange weasel called an “ottsel”. Jak and Daxter then go on a journey to find the sage Gol who may hold the key to returning Daxter to his human form. This story is standard for the fantasy/adventure genre but it also harkens back to old-school games which didn’t have very complex storylines. I am a firm believer that a storyline does not have to be complex to be engaging, and this game is proof of that.

The general structure of Jak and Daxter focuses on the player collecting power cells which allow them to progress to the next major location in the game. Power cells are gathered through a variety of means, whether it be through exploring the world, completing a platforming challenge, or defeating a mini-boss. The game provides the player with a wide variety of tasks to complete so that the collecting never gets stale. Besides power cells, there are also precursor orbs which can also be collected for buying power cells from NPC’s, and crates containing scout flies which will grant the player a power cell if all seven in that given level are collected. In short, the game has no shortage of collectable items, which is ideal for gamers who enjoy reaching 100% completion. 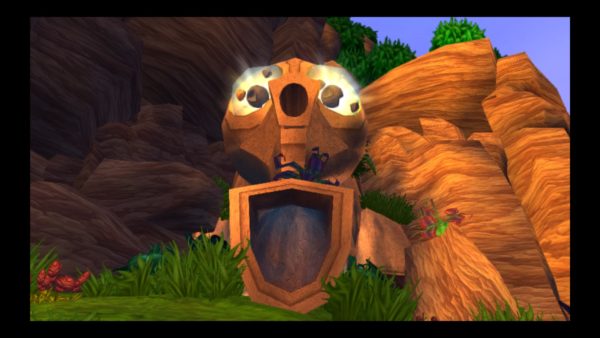 The Oracles’ deep voice always freaked me out a little as a kid.

Jak and Daxter provides an array of abilities the player gets to use. Like most platformer characters, Jak can defeat enemies through simple punches and jumps. However, the presence of Eco in the game’s world gives the player access to several more abilities. Green Eco restores Jak’s health incrementally or immediately depending on how much the player finds. Blue Eco speeds up Jak’s movement and lets him activate doors and switches that he couldn’t otherwise. Yellow Eco lets Jak shoot fireballs from his hand as a ranged weapon against enemies and obstacles. Finally, Red Eco gives Jak’s melee attacks increased strength and range for taking on armored foes or large crowds of enemies. The combat of Jak and Daxter is by no means intricate, but the addition of the various types of Eco keeps the gameplay fresh and prevents combat from becoming too repetitive. The game also integrates Eco into the platforming and puzzle sections, which makes the world more immersive and interesting.

Jak and Daxter further spices up its gameplay with vehicles like the A-Grav Zoomer and the flut-flut. The A-Grav Zoomer is a kind of hoverbike that Jak can ride and several levels in the game are designed around it. Some levels will have Jak racing on a timed course while others will have him chasing down enemies. Eco is also incorporated into these levels with Blue Eco acting as a speed boost and Yellow Eco as a forward projectile weapon. The flut-flut, on the other hand, is a huge flightless bird that lets Jak traverse platforming sections that he otherwise could not. While these two vehicles are not used extensively in the game, their inclusion introduces different kinds of gameplay into the mix that integrate well with the main mechanics of the game. 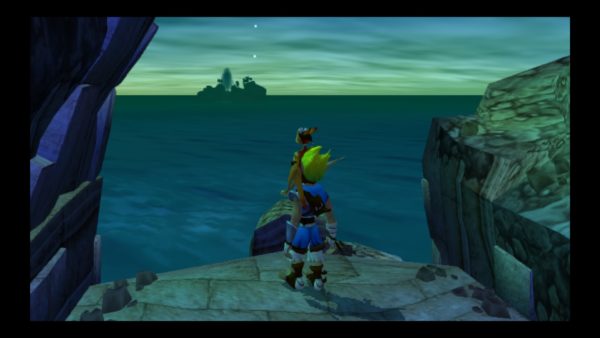 Even for 2001 graphics, this is still a pretty sight that evokes a sense of wonder.

While it is generally not talked about as much as other games in the genre, Jak and Daxter influenced platformer games in its own right. It was one of the first platformers to feature a completely open world, as the developers wanted to create a platformer game with no loading screens. After completing the game’s main story, the player can travel from the very first location of the game all the way to the final area without any loading screens. Several locations in the game also feature a day-and-night cycle which allows the player to see the sun rise and set the longer they stay in one location. These mechanics are fairly standard for many adventure games today, but back in 2001, it was ahead of its time.

The gameplay of Jak and Daxter: The Precursor Legacy is solid, but what sold this game for me as a kid was the characters. Even as an adult I get a lot of enjoyment out of watching the interactions between all of the unique characters in the game. The story of a young boy who has to turn his friend back into a human is pretty standard on its own, but the characters help to make the story more investing for the player. 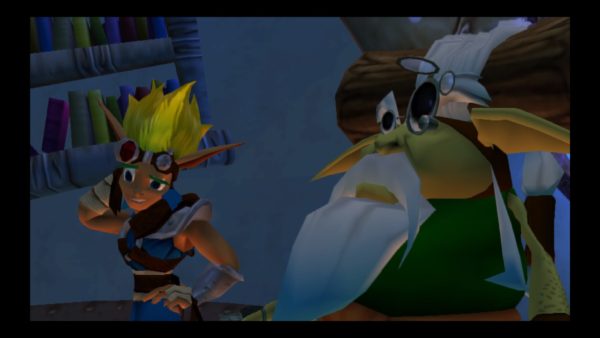 During my last playthrough of the game I noticed that each of the main characters is a bit of a twist on a popular fantasy archetype. Jak is a silent protagonist. Daxter is the sidekick but instead of being supportive, he is sarcastic, loud-mouthed, and constantly berates Jak (and the player). Keira is the de-facto love interest but is a genius mechanic who often functions as a guide for the player. Samos is the wise old sage who comes across as a grouchy old man about to yell at you for stepping on his lawn. Also, the main villain of the game is voiced by Dee Snider, the lead singer of Twisted Sister, and he relishes in every bit of dialogue he is given with his gravely over-the-top voice.

The writing is strong as each character, except for the mute Jak, gets a few good quips or one-liners. The game as a whole never takes itself too seriously without ever slipping into outright parody. Voice actors Max Casella (Daxter) and Warren Burton (Samos) stand out amongst a stellar crew. I do wish that Dee Snider got more lines, as his character doesn’t come into play until the last quarter of the game and Snider’s performance is a lot of fun to listen to. 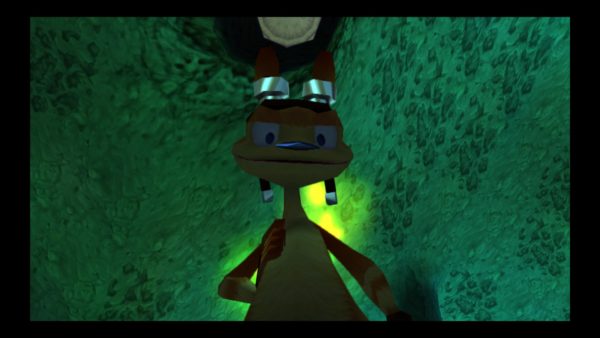 Daxter’s disapproval every time you die leads to some of the best lines in the game.

Despite all of its greatness in its gameplay and presentation, the first Jak and Daxter game is not flawless. The biggest technical issue the game has is its camera, which can sometimes get stuck on obstacles when rotated. This can occasionally lead to the player missing jumps or running into enemies because the camera didn’t allow them to see what was next. This doesn’t happen too often, but when it does it can be pretty frustrating. Also, as a game from 2001, the graphics can look odd at times and the player may run into a couple graphical glitches along the way. On the PlayStation 4, the graphics look the same as they did on the PlayStation 2, which will likely evoke nostalgia from some players and frustration from others. 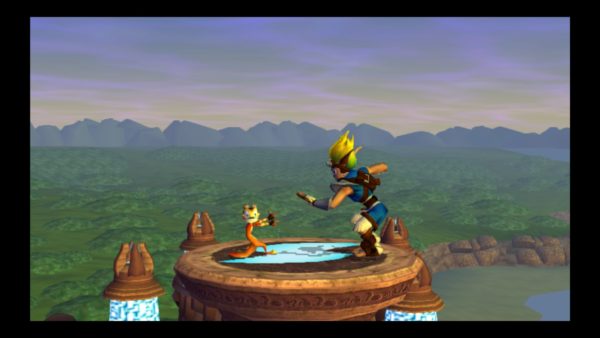 Coming back to Jak and Daxter: The Precursor Legacy after so many years, I was hoping to have some light-hearted fun and maybe recapture some childhood nostalgia. After completing the game again, I can safely say that this game holds up well nearly twenty years after its initial release. With everything going on in the world, I really needed a light-hearted romp to entertain me, and Jak and Daxter delivered just what I needed. With the success of so many remastered games lately, I hope the developers at Naughty Dog bring back the Jak and Daxter franchise in some capacity. If Naughty Dog ever remasters the original Jak and Daxter game, I will definitely be the first customer in line.

Jak and Daxter: The Precursor Legacy is a true classic from the era of the PlayStation 2 that any fan of platformers can get immediately sucked into.