While reviews of new games usually attract the most attention in gaming journalism these days, retro reviews give us an opportunity to look back on the history of gaming, to see how we got to where we are today. They show us the foundations upon which modern gaming has been built, and for many of us, they remind us of why we fell in love with gaming in the first place. This particular review is no exception. Skies of Arcadia, a JRPG for the SEGA Dreamcast released in 2000, is a game that is near and dear to my heart, as it introduced me to the joy and wonder of story-driven games. 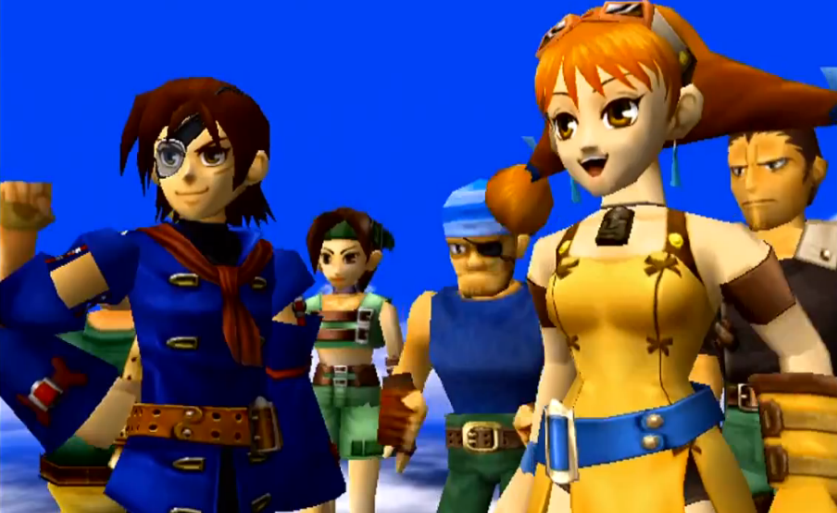 Violence: Characters attack one another with a variety of weapons, including swords, guns, boomerangs, and magic. They cry out in pain if hit, and collapse to the ground if knocked unconscious. Most enemies also evaporate into thin air upon defeat. Blood does not typically appear during the game, but there are a few select instances where small amounts of blood are depicted.

Sexuality: Some of the female characters wear skimpy outfits, such as short-shorts or tops that would be appropriate for a bikini. A couple of male characters boast about their popularity with the ladies, and one of those two makes unwanted and suggestive comments about women’s appearance. At one point in the story, one male is accused of undressing a woman with his eyes after he stares at her for a while. A male character can accidentally discover a hole in a wall looking into a female character’s room, and he watches her briefly as she adjusts her hair.

Magic: Many characters in the game are capable of performing magic spells during combat.

Positive Themes: Themes of camaraderie, trust, and cooperation permeate throughout the story. The main character never wavers in the face of long odds and strives to accomplish feats that others consider impossible. 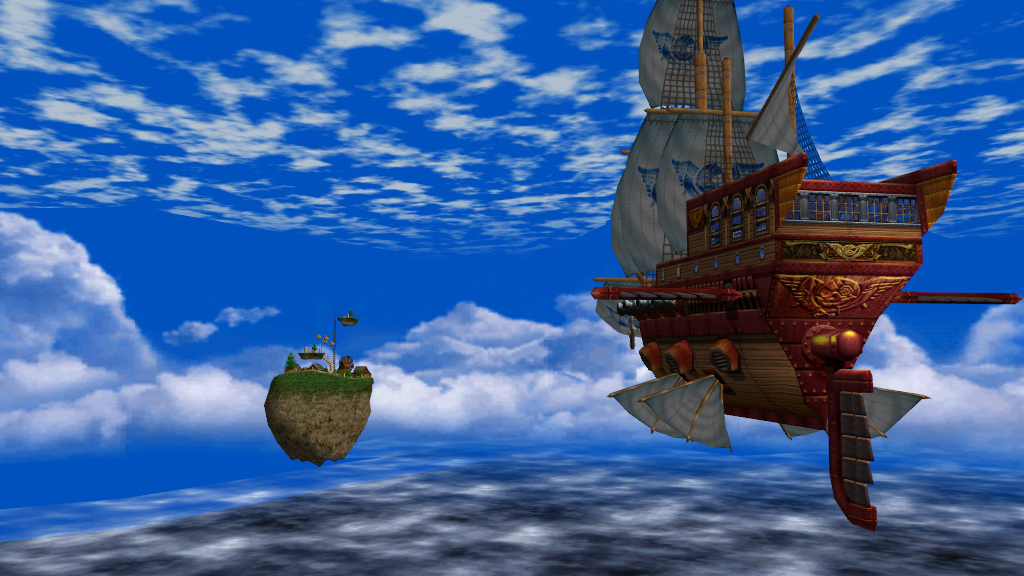 In the world of Skies of Arcadia, people live on large islands that float in the sky and sail from island to island in flying ships. You play as Vyse, a young Air Pirate with Robin Hood-esque ideals—robbing from the rich and using some of the money to help others in need—sailing under the leadership of your father, the ship captain. One night Vyse and company attack a ship belonging to the powerful Valuan Empire. In addition to the usual spoils, however, they also rescue Fina, a mysterious young woman in strange white clothing who had been captured by the Empire. What follows is a tale of grand adventure as Vyse and his friends sail the skies, meet people from numerous foreign cultures, and uncover long-forgotten secrets that threaten the entire world. 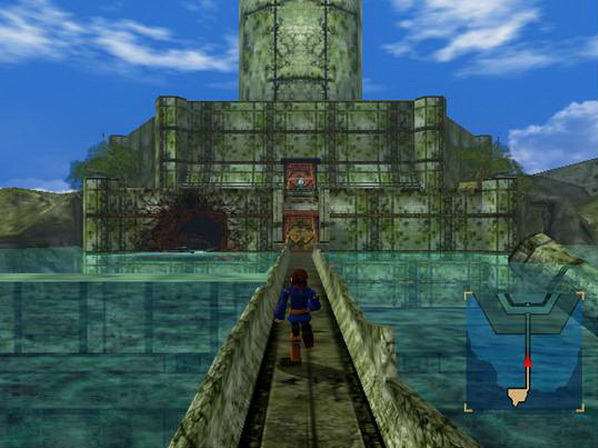 Skies of Arcadia’s greatest strengths lie in its storytelling, characters, and imaginative world. The main cast is a likeable, fun-loving bunch who are excited to discover all that their world has to offer. The story features plenty of poignant moments, along with a handful of twists scattered throughout the plot which ensure that the narrative doesn’t grow stale. During your adventure you discover all manner of environments atop the floating continents—including icy tundras, scorching deserts, and lush forests—along with creatively designed ships that take inspiration from many different sources in the real world, from old European-style galleons to modern ironclad cruisers. 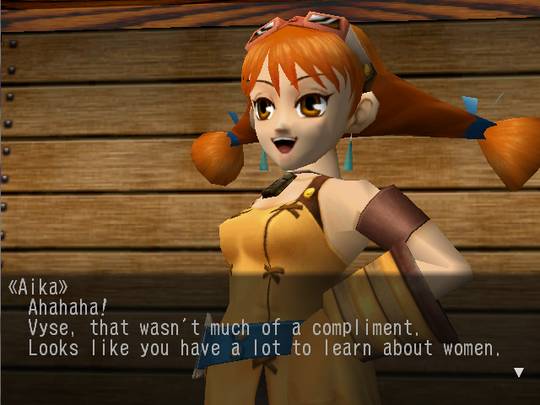 The developer’s attention to detail and commitment to characterization and worldbuilding can perhaps be seen best in the innumerable objects with which you can interact. If you walk up to just about any noteworthy object in the game—a mop, a cannon, a stove, a tattered old flag, etc.—and press the A button, Vyse will describe the object and often provide additional commentary, either of how this particular item is used or some of his own personal observations. This helps not only to flesh out the world, but also emphasizes Vyse’s curious and adventurous nature. The fact that you can skip all of these interactions—and that the storytelling still works if you do—is a testament to Overworks’ skill in crafting the narrative. 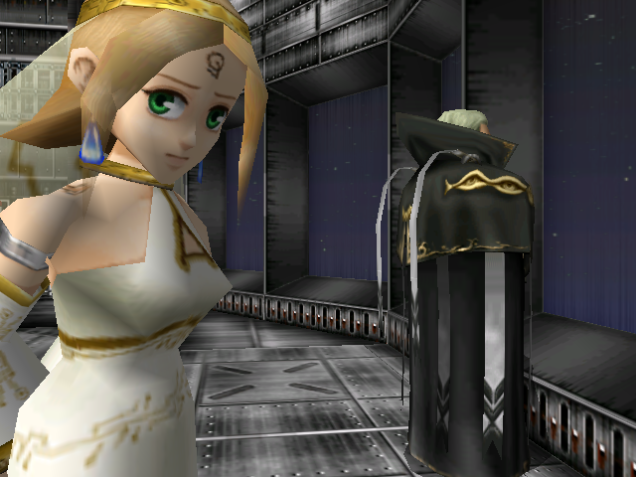 Skies’ is no slouch in its audio/visual presentation, either. While the textures are blurry by today’s standards, the environments are nonetheless rich in detail, and the vibrant color palette—particularly the gorgeous SEGA-blue skies—add pop to each locale. The expressive faces showcase emotions effectively, making the characters endearing and memorable. The soundtrack complements the world and narrative beautifully; most of the tracks are upbeat, and the notes themselves soar and float as though they are flying alongside you.

In terms of gameplay, Skies features turn-based combat that takes place either in hand-to-hand or ship-to-ship battles. Hand-to-hand encounters take place either on land or on the deck of your ship, and pit your party against various monsters and human enemies. Each member of your party can perform physical attacks, magic attacks, and special moves that are unique to that character. Victory in combat requires you to play to each character’s strengths, balance offensive and defensive tactics, and carefully manage your Spirit Gauge, a meter shared among the entire party and used to perform both magic attacks and special moves. It isn’t a particularly complex combat system and there isn’t much customization to speak of; the composition of your party changes at specific points in the story, and new characters bring with them new skills, but this only occurs a few times during your journey. Thankfully, the magic and special attack options contain just enough depth to keep things interesting. 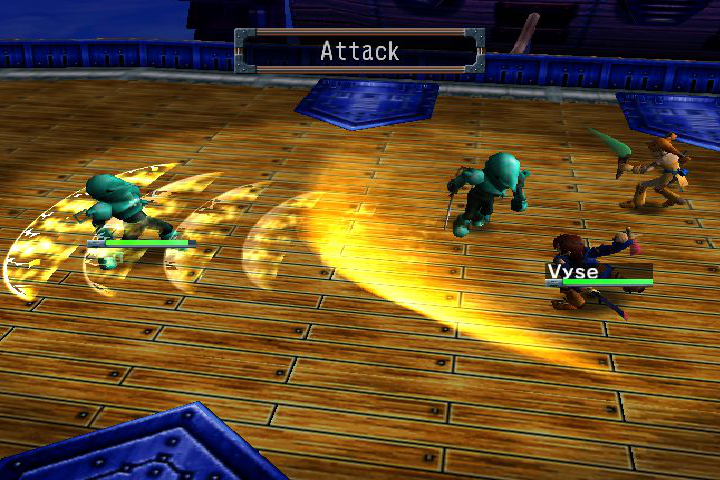 My biggest gripe with the game is found in the hand-to-hand combat. These encounters occur as random battles as you walk through dungeons or fly through the open world, and there are simply too many of them throughout the game. Their frequency often breaks the game’s flow, at times becoming a minor annoyance. At a certain point in the game, you are even required to accrue a large amount of money in order to advance the storyline, which inevitably involves grinding through battles even more than you already do through the course of normal gameplay. 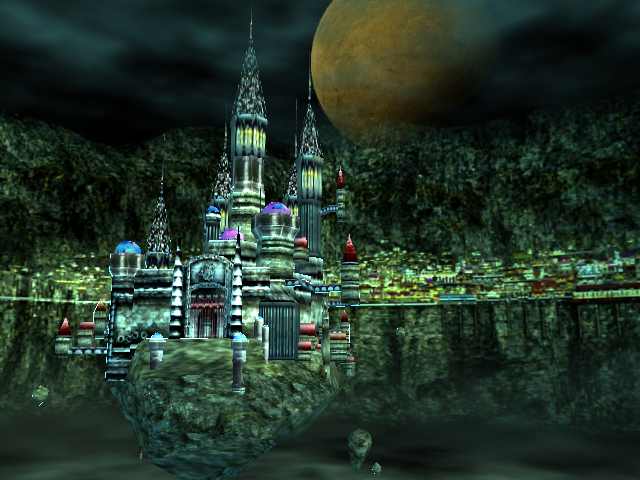 Ship-to-ship combat is more involved. Each turn is divided into three or four rounds—based on how many members are in your party at the moment—and is displayed in the form of a “battle grid,” with each column representing one round and each row representing a member of your party. Each character claims one of those columns to perform an action, like firing a cannon, using an item, or taking defensive maneuvers. Markers at the top of each column indicate when your opponent will use powerful attacks and when they are vulnerable, allowing you to plan your moves effectively. Certain ship battles also force you to make a strategic decision, such as picking which side of the enemy ship to attack, or changing speed in order to catch your opponent by surprise. Your decision can have a dramatic effect on the battle; a smart choice can leave the enemy open to heavy attack, while a poor choice puts you in hot water instead. 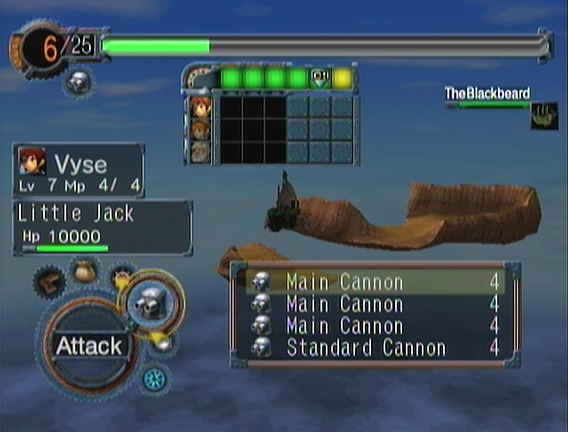 The game’s other mechanics further serve to make you feel like a leader and an adventurer. Interacting with certain spots in the game world uncovers Discoveries, which take the form of ancient ruins, fascinating geological phenomena, new species of animals, and more; finding them provides you with a paragraph or two of lore, and the information can then be sold to the local Sailor’s Guild. Partway through the story you also get to captain your own ship and recruit crew members to fill various roles; these crew members can be called upon during ship battles to execute unique attacks and other abilities.

One of the more obscure mechanics in the game is the Swashbuckler rating. At specific moments in the story, you have to make a decision of what to say during conversation; this decision could take place during a benign conversation with a friend, or during a serious situation in which you must choose whether or not to attack a particularly powerful opponent. Making the correct decision—which typically means picking the choice that is the bravest, wisest, or most uplifting to those around you—increases your rating. If you make enough correct choices over the course of the game, Vyse’s reputation in the world rises, and his title—which appears in the menu screen—becomes more impressive. This mechanic is mainly for show, as it doesn’t change the overall story and has almost no effect on gameplay; however, a powerful item in the game can only be acquired if Vyse achieves a high enough rank. It’s worth noting that the GameCube port of Skies handles the Swashbuckler system a little differently; that version introduces new rankings that can only be acquired by completing specific objectives, and the highest rank requires almost total completion of all the game’s content. 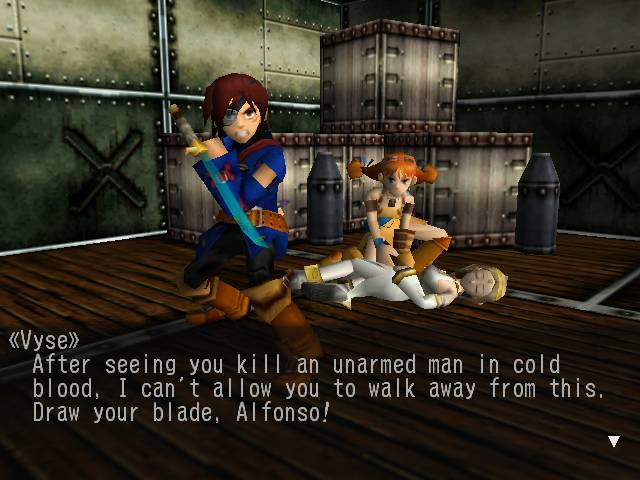 The original Dreamcast version has a unique feature of its own: Pinta’s Quest, a minigame played on the Dreamcast’s Visual Memory Unit (VMU). Centered around a minor character named Pinta, this minigame earned you gold and items that could then be transferred to the main game. It’s an interesting and creative idea that takes advantage of the Dreamcast’s hardware, but it’s also completely forgettable and irrelevant to the overall experience. 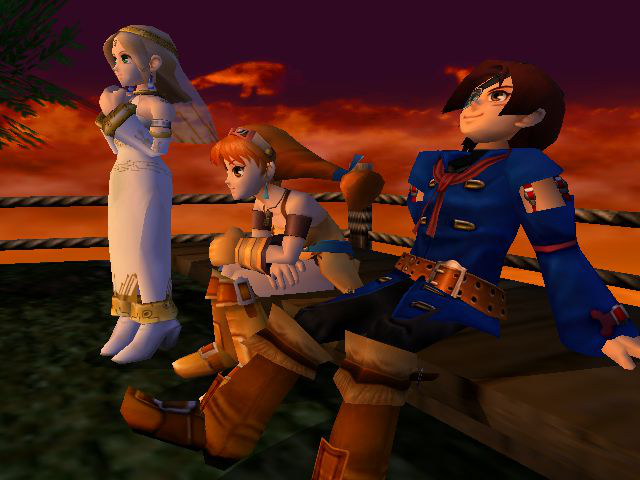 Putting all of its pieces together, Skies of Arcadia offers an optimistic, sweeping adventure. Its creative setting, delightful characters, and inspiring story of heroism and triumph draw you in and immerse you in this fictional world. The excessive random battles hamper the experience from time to time, but they can’t overshadow all that this game does right. Skies showcases the ability of games to tell compelling stories, and its example still shines today.

Skies of Arcadia's imaginative world, lovable characters, and upbeat storytelling combine to create a grand adventure that shouldn't be missed.