[amazon asin=http://www.amazon.com/Sonic-Adventure-2-Battle-GameCube/dp/B00005ULXN/ref=sr_1_cc_1?s=aps%26ie=UTF8%26qid=1420675055%26sr=1-1-catcorr%26keywords=Sonic+Adventure+2+Battle&text=Amazon][Dream]Cast your mind back to the late 90’s. SEGA is building their Dreamcast empire upon a single game: Sonic Adventure. Being the first fully-3D non-racing Sonic title, Sonic Adventure (SA) was so popular on the Dreamcast that the show Sonic X adapted the franchise. The DC also received a sequel known as Sonic Adventure 2 (SA2) which some consider to be the greatest sonic game of all time. The Dreamcast eventually did die, but these gems outlived it: both Games were ported to Nintendo’s GameCube years later. This was a shocking move given the two companies’ previous rivalry during the early 90’s, but look at the two companies today—almost every Sonic game finds a home on Nintendo consoles or handhelds. So it’s neat to look back at the beginning of this relationship, with the port of SA2 to the GameCube, renamed Sonic Adventure 2 Battle (SA2B) due to the new inclusion of a 2-player Battle Mode. 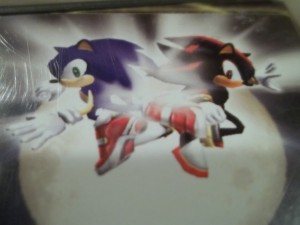 The gameplay consists of 3 different styles: running stages, shooter stages, and exploring stages. The whole game is first divided into two stories (Hero/Dark) with the final being added after the first two arcs are completed. Each story has 3 playable characters, each having a different style of gameplay.

Sonic and Shadow stages are the running stages, and involve insanely awesome platforming. Players run through vast zones, attacking G.U.N. or Robotnik’s robots as they get in the way. These are not too easy either due to the integration of gravity changes and tricky elements that make things extra dangerous. Even with these challenges, the game is balanced in difficulty. It is possible to enjoy the zones while also being challenged. The running stages are definitely the best stages. Boss battles follow the same method as the stages where homing attacks or spin attacks are used to cause damage.

Tails and Robotnik are the characters used in the shooter stages. Tails transforms the X-Tornado into a walker, and Robotnik’s Eggmobile is fitted with legs. Characters walk through the levels targeting enemies or items in the level and firing at them. It also involves many platforming tricks and some puzzle elements. These are fun, but not as good as the runner stages. Boss battles use the same targeting method as the stages to inflict damage.

Knuckles and Rouge are played as in the exploring stages. These are the ones I like the least. They range from “Alright” to “Alright I’ve had enough. Let me out.” Basically you run around the level searching for items, be they Chaos Emeralds, Master Emerald shards, or keys. The whole time you take hints from floating computers while a radar tells you how close you are. Some are short, simple, and fun. Some are long, monotonous, and no fun. Boss battles are about the same as in runner stages, but with some inspiration from the exploration stages.

Sonic Adventure 2 Battle  incorporates many elements from Sonic Adventure. The runner stages are obviously inspired by SA1‘s Sonic stages though they maintain more original and interesting design, creating a faster and more fun level. Basically that means you will be following a more obvious level path with very few bottomless-pit-of-doom problems. The shooter stages are improved versions of SA1‘s Gamma stages. They depend more on simpler-style platforming elements than the Sonic/Shadow levels while using the shooter elements from SA1 as the main mechanic of the level. The explorer stages are very similar to SA1‘s Knuckles stages, with larger levels. But with all this variety, only 1/3 of the game can be considered “normal” for the Sonic franchise, and that 1/3 is the best of the whole game. However, I must to treat it like Sonic Unleashed, reviewing the game as a whole instead of just the parts I like.

The boss battles are mostly uninteresting and very easy. They include a G.U.N. walker-vehicle that Sonic and Shadow fight, a giant ghost that laughs like an idiot when he hurts Knuckles, and even the last phase of the final boss is uninspiring. The latter is basically the previous phase of the boss smacked right onto the nose of space colony ARK, with lasers firing from it and red orbs protecting it while Sonic and Shadow try to attack a red swollen area on the beast. The most interesting battle is the Egg Golem, whose fists must be avoided while the player makes his or her way to the boss’s head where Sonic can attack him. Sure, all battles are fun to some extent, but none really excited me.

Multiplayer involves completing a stage ( running, shooter, or exploring) faster than the other player. I love the wide selection of playable characters here, including Metal Sonic, Tikal, and Chaos Zero among many others.

The in-game Chao Garden doesn’t seem too dissimilar from SA1. But in the GCN version of SA1, you could connect the Game’s Chao Garden to the one in Sonic Advance or Sonic Pinball Party (GBA), providing you had the proper system link cable, and a copy of one of the previously mentioned games. You could swap Chao on the GCN with one on the GBA, so if a Chao on either system was malnourished, you could take more care of it by putting it on whichever system you play more. In SA2 you can also connect to Sonic Advance or Sonic Pinball Party, and you are also given the extra ability to connect to Sonic Advance 2 for its Chao Garden as well. Sadly, in order to do this, you must have the Chao Garden unlocked on Sonic Advance 2, and unlocking that Garden requires collecting the 7 Chaos Emeralds in that game, and that’s no easy feat. I wish this was readily available like it was in its predecessor. However, being a minor feature within a minor feature, it does not take much away from the game’s overall value.

The controls are good, but the camera can get annoying from time to time. It takes a bit of finesse to turn Sonic when he’s on the snowboard, but it is doable. I always felt in control and never really worried that I wasn’t going to make a jump due to bad controls of any sort. It takes a short amount of time to get used to the individual function of each button, but soon enough, I mastered it.

The plot is hit and miss. It’s thick, interesting, and informative. Being a new character, Shadow gets lots of character development, but I don’t want to spoil the plot for you. However, the overall plot does not get explained as well as it could be. I played the Hero story first, and there were cutscenes that made little sense until I played the Dark story. Still, I felt in the…dark…about a few things. Why are most of the robots defending ARK are the same as G.U.N.’s robots? Was Gerald Robotnik (Eggman’s grandfather) a former member of G.U.N.? Why can’t Eggman make those robots quit attacking him if he already has access to everything else on ARK? But, the average Gamer is likely to not notice or care about these things, as they are minor. I will note that the plot gets much more interesting towards the end. Professor Gerald has ARK set on a crash course with Earth, and Sonic and Shadow have to stop it. Want to know how? Play the game.

Graphics are great for this game. Nothing made me think “Ugh, they didn’t even try!”, and nothing really seamed outstanding from other Games’ graphics. Character sprites look the same as they did in SA1, excluding Dr. Eggman and the new characters. Sadly, this means that Knuckles is as ugly in the face as ever. Thankfully, despite the fact that Rouge the Bat reveals cleavage in the Game’s art, her character sprite does not (unless you unlock her very revealing extra costume). Everyone else looks mostly on-target, though most character models do get off-target at some time throughout the game.

The cutscenes definitely accomplish the goal of representing the complicated plot. Though throughout character’s voice clips often run over one another, sort of losing the idea it was intended to present.

Music here is nice. It fits each level and a few tunes are very memorable, like “Live & Learn” and “Escape from the City”.

Voice acting ranges from amazing to mediocre. Sometimes the emotion of the voice sets the scene perfectly, and sometimes the words don’t really fit the voice. An example would be when Shadow the Hedgehog exclaims, “I’m the coolest!”
Content

No swearing. “Shoot” is about as far as it goes.

Cartoon Violence. The most major thing is Dr. Eggman pointing a gun at Amy.

Towards the end a couple is shown with wine at their table.

Towards the end, a group of people in a room on their knees wearing Islamic attire raise their hands after the world is saved from collision with the ARK. There is a Chao fortune teller, but it doesn’t tell fortunes, just names your Chao, but has a crystal ball and references to “summoning powers to be” before giving the Chao a name. Also there are a few ghost in the Game

Rouge the Bat is present, but only her cartoon illustrations reveal cleavage. An extremely revealing costume can be unlocked though. It gives her a low-cut top and short-shorts. It is totally unnecessary to unlock and is thus completely avoidable. Also some citizens reveal cleavage.

Mild lyrics. One song calls Rouge “Sexy and smooth” and later exclaims “Give up the Emerald or die, I don’t love you.”.

Overall, Sonic Adventure 2 Battle is a timeless classic. Though I don’t feel it’s the best the series has ever had, it is a worthy contributor to the series. It’s huge, interesting, and, most importantly, fun. While sometimes it can feel confusing, it is overall great, and I’d say it’s necessary to any GameCube collection.

While only 1/3 of the Game can be considered "The Sonic Norm," the game overall is a timeless classic that will forever live on in Sonic glory.