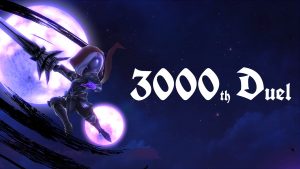 As I dove into the world of 3000th Duel, I couldn’t help but feel, in a word, nostalgic. Not only does the game evoke a joy that reminds of the days I played side-scrollers on my Sega Genesis or Super Nintendo (in a way where it looks and plays beautifully), but it’s also EXTREMELY reminiscent of the difficult, strategic action games that satisfied and frustrated gamers over the last decade.

Spiritual content: There are references to cults, forbidden magic, and monsters, and larger than life bosses plague every area of the game.

Violence: As an action game, there are a lot of intense fantasy battles with weapons where your goal is to defeat (kill) the enemy. There is also mild blood.

Ever wonder what it would be like to play a strategic action game like Jedi: Fallen Order, or games like it, in a 2-D side scrolling game? 3000th Duel evokes a sense of familiarity in its 12+ hours of gameplay, both in its times of frustration, and overall fun and joy learning what it means to overcome the odds against you.

You play the “hero”, a swordsman (to start!) on a journey to recover his memories. If you’re confused when you begin the game and you’re not sure where the story is leading, that’s the intent! Throughout the game you will meet with NPCs and discover memories that will begin to reveal who 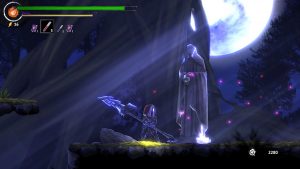 you are and why you’re there.

Throughout your journey, you will battle enemies of different difficulty levels, face larger-than-life bosses, and solve puzzles to unlock skills and equipment that will help you succeed.

The world in 3000th Duel is vast and various. Rather than your average side-scrolling game that has you complete one level at a time, this world is set up—in the best way possible—as a 2D open world game, where as you unlock areas, you can travel back and forth as you please. Portals also exist as a way to teleport you from one area to another, because as you unlock areas, you’ll end up unlocking A LOT! When you click on the map, it’s just one grand world filled with forests, dungeons, castles, and caves. 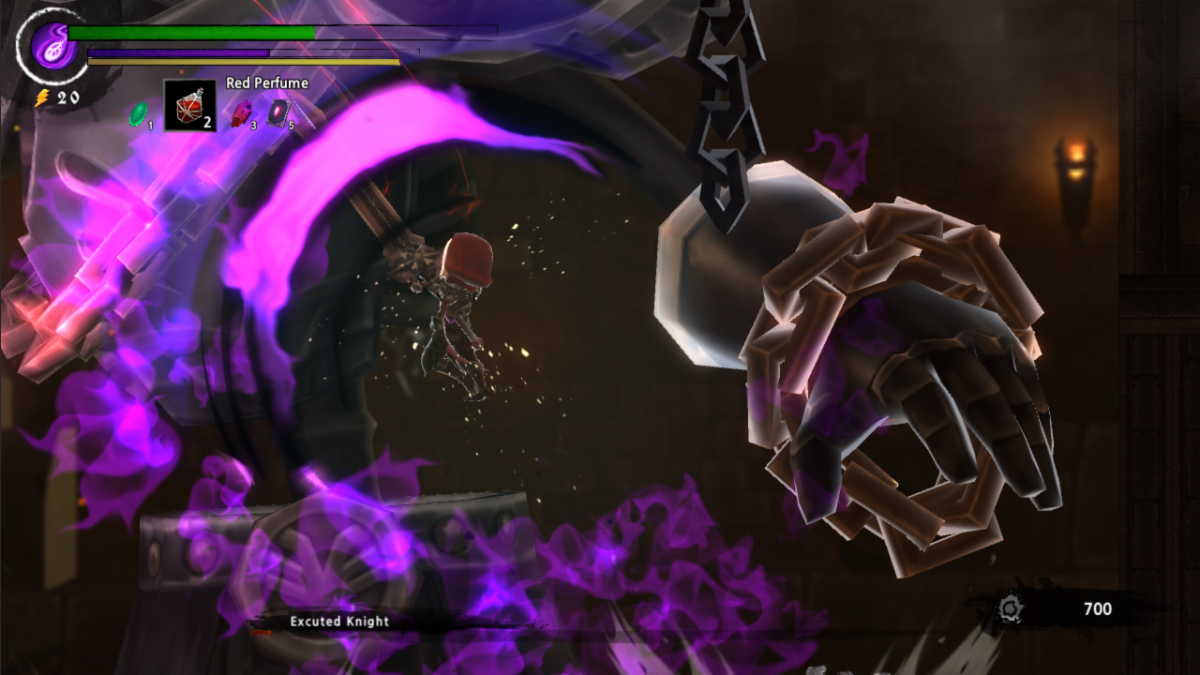 I’ve given you an overview of what to expect from the world of 3000th Duel, but how does it play? In two words, fantastic and, once again, nostalgic. At first you’re equipped with a sword, and in time, you unlock the ability to perform various spells of magic and two additional weapons—a two-handed blade and lances.

Throughout your time, you’ll find new weapons and spells, giving you a wide array of customization. Want to attack the enemies quick and efficiently? Use the sword. Want to attack a bit slow, but with significantly more power? Use the two-handed blade. Or use the lance to attack from farther away.

Magic is the same way. Maybe you want to use a fireball that casts straight forward, or poison that is cast in the air but drops in multiple points; it’s up to you. Your armor is just as customizable, letting you equip better armor as you go, and giving you trinkets that you can equip depending on what type of situation you’re facing.

Every enemy varies in difficulty and the bosses are grand and have a learning curve. While every one of them follows a certain tactic that can be overcome, like the games I mentioned earlier, if you’re not careful, even the 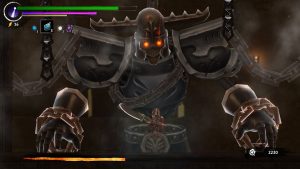 easiest of baddies will take you out. BUT! Like those games I mentioned, when you die, it’s not game over or back at the beginning. You DO go back to your last save point when you die, but your “essence” is left over at the enemy that killed you, which you can reclaim and restore the experience you earned up to that point.

There is one frustrating aspect though—while you don’t go back to the beginning, there are times where save points are far and few between. I found myself on a couple of occasions moving forward, gaining experience, and advancing the story only to be defeated and taken a LONG way back to the previous save point. This is a game where you never want to take a save point for granted.

Still, frustrations aside, this is an accessible game that everyone can play, compared with other similar games, which are rated more mature. It’s great that younger audiences can pick up and enjoy this game. And if you think its accessibility limits the enjoyment of more experienced gamers, it doesn’t. Being a veteran gamer myself, I really enjoyed my time playing the multiple levels and learning what tactics were required to defeat the bosses at the end of each area. 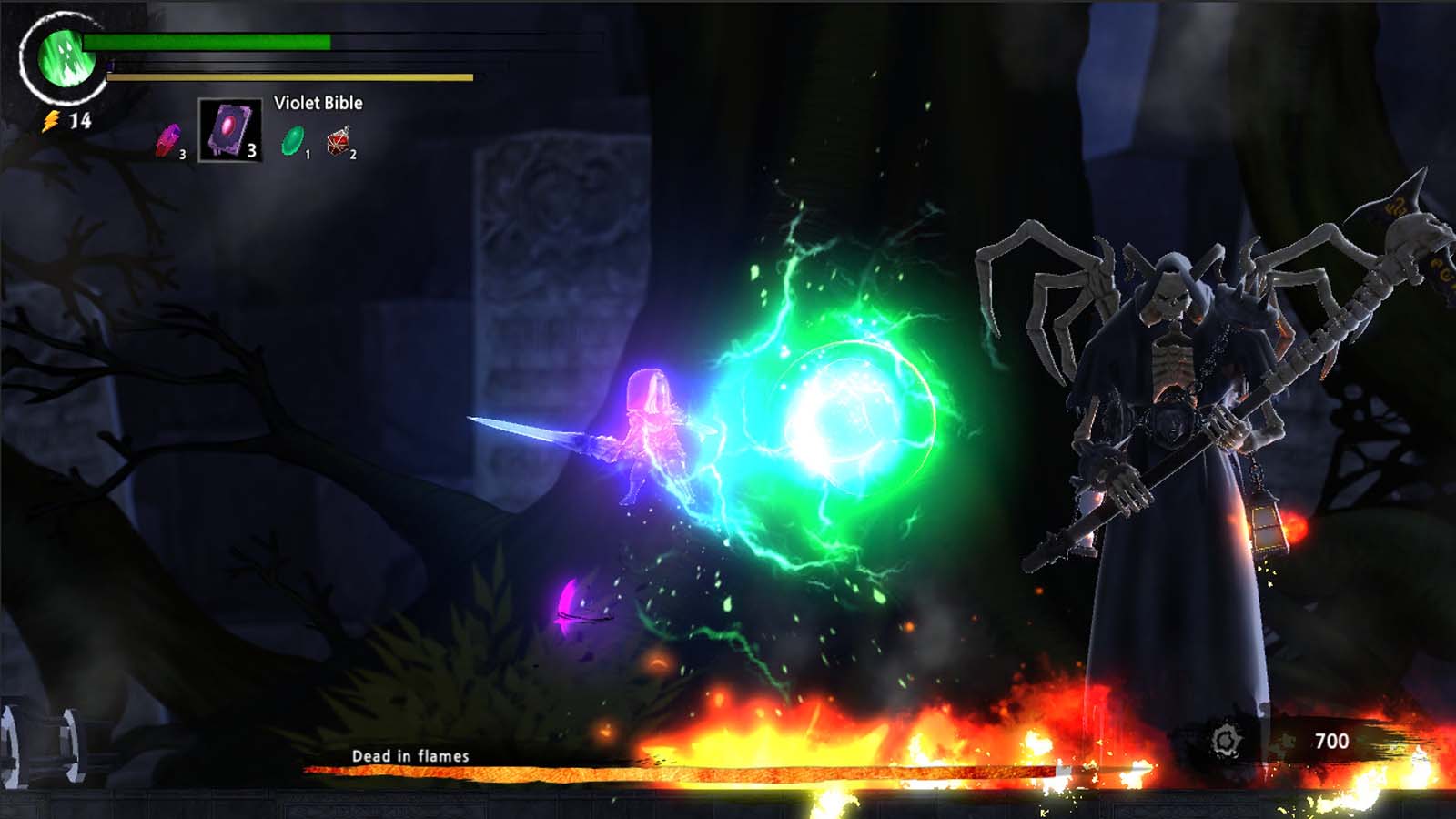 Overall, 3000th Duel is a wonderful game that evokes memories of my favorite side-scrollers and my favorite strategic action games of the modern times. There’s a learning curve that at first may frustrate you with the amount of times you die, but it also rewards you with weapons, equipment and powers as you overcome your enemies.

The gameplay is satisfying, and the graphics are phenomenal. You’ll find yourself coming back to this game time and time again, wanting to explore new areas and return to old ones to unlock parts of the level that were previously restricted. Overall, it’s a game that can be frustrating at times, but is rewarding and charming.

Not only is it a fun game to play, it also looks beautiful graphically and it evokes a strong sense of nostalgia that can be lost in many indie games in today's gaming world.