I Beat it Fair and...Square

When I came across the Adventures of Pip, I was intrigued. Adventures of Pip seemed to be a unique adventure that I could sink my teeth into and enjoy with a little less difficulty than my previous platforming adventure, Celeste. Would my premonitions be right? Let’s find out.

Sorcery: The main antagonist is a sorceress with magical powers.

Got a problem with my looks? Square Up! You won’t!

Adventures of Pip  wastes no time with tutorials. After some scenes and animations of exposition, Pip the pixel is sent on his way to save the kingdom from the horrible fate of being de-rezzed. (Not in the TRON way, thankfully.) No one dies, but they literally change to a different resolution. Pip must save the princess Adeline from the clutches of evil queen DeRezzia, and prevent her resolution from being manipulated.

The complexity of queen DeRezzia’s aspirations is interesting. She means to kidnap Princess Adeline so that she can use the princess’s powers to give everyone equal standing in the kingdom. See, in Pip’s world, those who have more pixel resolution are in a higher social class, all the way down to the single-pixels, who are in a lower class. If it sounds like kind of a complex plot for such an otherwise wacky game, that’s because it is. The hero’s conflict as a pixel feels out of place in this game (not that Pip ever has dialogue anyway.) That being said, the amount of talking in Adventures of Pip fits the length of the game. It’s usually a short 5-6 text boxes, and then it’s on to the next thing.

Even though incredibly short, I find the dialogue in Adventures of Pip as another of the game’s strong points, though it is not for everyone. I love plays on words and witty humor. Thus, character interactions were very pleasing for me to read. However, if pixel jokes and gags aren’t your thing, there might not be a whole lot for you in character interactions. Dad jokes are 90 percent of the game’s dialogue, and it does get a bit old even for me. Some bosses have no dialogue at all. 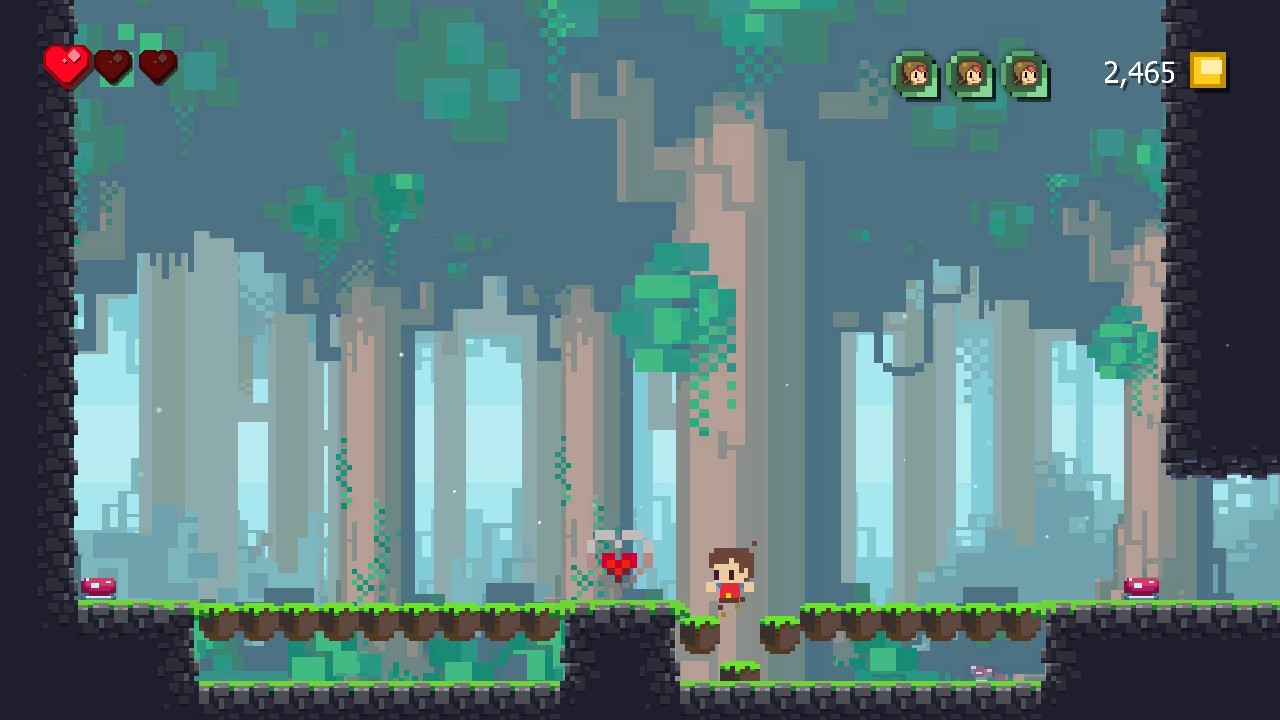 Defeating a boss yields a familiar sight for all gamers.

Incredibly, the gameplay is also based around resolution. Pip starts the game as a single pixel, but he is able to transform between his single-bit self, to an 8-bit, and finally, a 32-bit form before long. This idea is genius, as each form is attributed to a different platforming trope. As a single pixel, pip can jump and glide, but runs slowly. In 8-Bit, Pip can punch, moves faster, and can wall jump. Lastly, 32-bit Pip is heavy, can move fast, and wields a sword but can’t wall jump. In order to evolve, Pip has to kill a certain type of enemy, and Pip can devolve anytime by the hold of a button. Platforming puzzles revolve around these abilities, and each area has different region-based puzzles to incorporate them. For example, at a volcano level, water monsters have to be killed in order to make lava walls solid for Pip to wall-jump and progress.

Although the resolution concept is genius (and the game’s strongest point), I’m dismayed to have found Adventures of Pip’s gameplay severely mediocre. It is true that each area incorporates Pip’s abilities differently, but eventually I couldn’t help but feel it to be monotonous. There is little replayability, and the only extra objectives in the game are to find villagers and buy upgrades. Although Pip’s movement and controls generally feel alright, there’s only so much you can do with it. The gameplay isn’t varied much, and there are only a handful of different enemy types. Some villager locations seem to cheaply address replayability by putting them in front of forced checkpoints at times, requiring a complete level redo if missed. The general gameplay difficulty is just enough of a pain to make redoing levels a hassle, which made doing them over feel like moving through molasses. 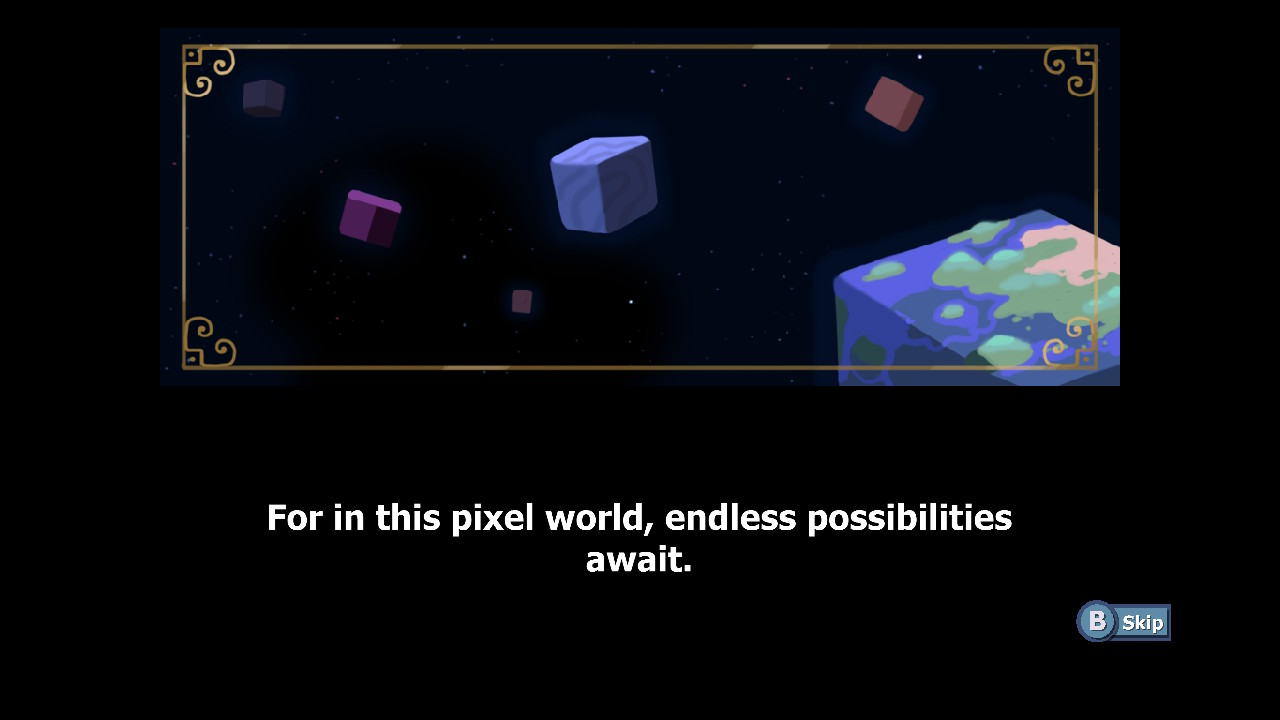 Music often goes a long way to make an adventure more exciting and enjoyable. That’s why it may be one of Adventures of Pip’s biggest drawbacks. Throughout the entire game, I was irked to not find a single track that I found catchy. It was actually the opposite. In a couple of particularly burdensome levels, I ended up turning off the volume in favor of Pandora radio. The sound effects never really helped much, either.

Honestly, like many other features of the game, the music was just so generic and lifeless that it often made gameplay worse. There are no dynamics. Boss battles and instant-death situations featured the same music as the rest of a level.

It is my personal belief as a gamer and reviewer that games should never feel like a chore. This is especially true for a platforming adventure that is less than 10 hours long. It actually took me around seven to complete Adventures of Pip. Outside of gameplay challenges, there should be no reason for a player to feel burdened to keep progressing a game. Unfortunately, Adventures of Pip had me feeling this way from level 2 to completion. There were some good ideas and challenges, but they were just too far and in-between for me to be engaged. The entertaining dialogue was not abundant and what was included eventually became repetitive. Despite all of these things, I feel Pip’s premise is strong enough to warrant a good sequel. It just needs to feel like it wasn’t made within a short time frame. 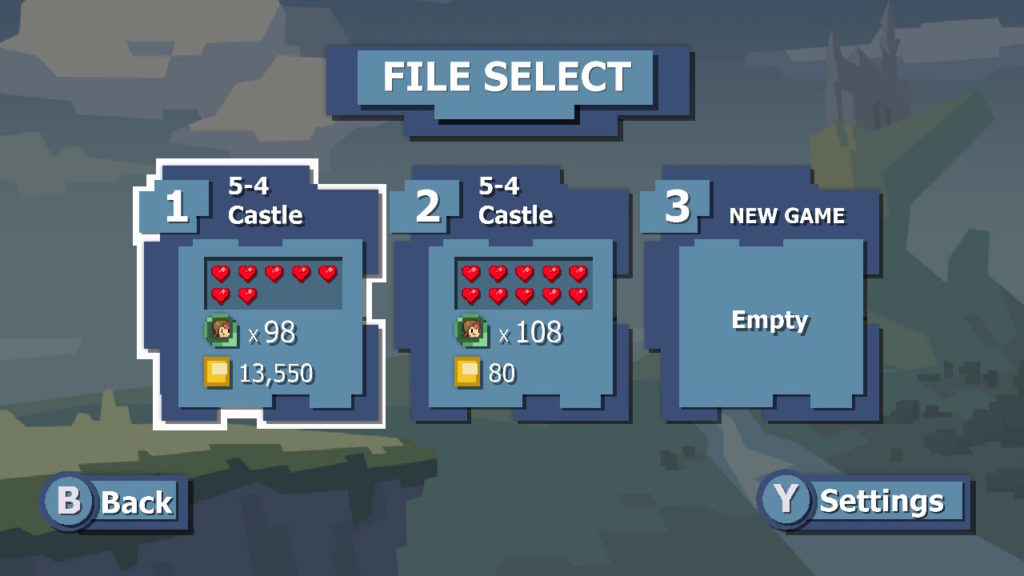 There they are, ladies and gents: My first clear, and 100% completed, save files.

Though the pixeled ideas of Adventures of Pip are fantastic, mediocre gameplay execution causes them to lose all their edge.