Rating: PEGI 3 (suitable for all audiences)

Antigraviator entered the Steam Greenlight program in February 2017, and was almost immediately greenlit by March. Developer Cybernetic Walrus attempted a Kickstarter, but it was regrettably unsuccessful. Needless to say, the competition is stiff out there for futuristic racers, as both Redout and wipEout are out on the market with fandoms split down the middle (we will not discuss jaded F-Zero fans). Luckily, the developers could benefit from the Flanders Audio/Visual Fund, which would support 20% of the game after the developer had raised at least 50% of the development costs. Video game development is difficult and expensive, but Cybernetic Walrus has overcome these obstacles to produce some stiff competition for the racers already on the market. 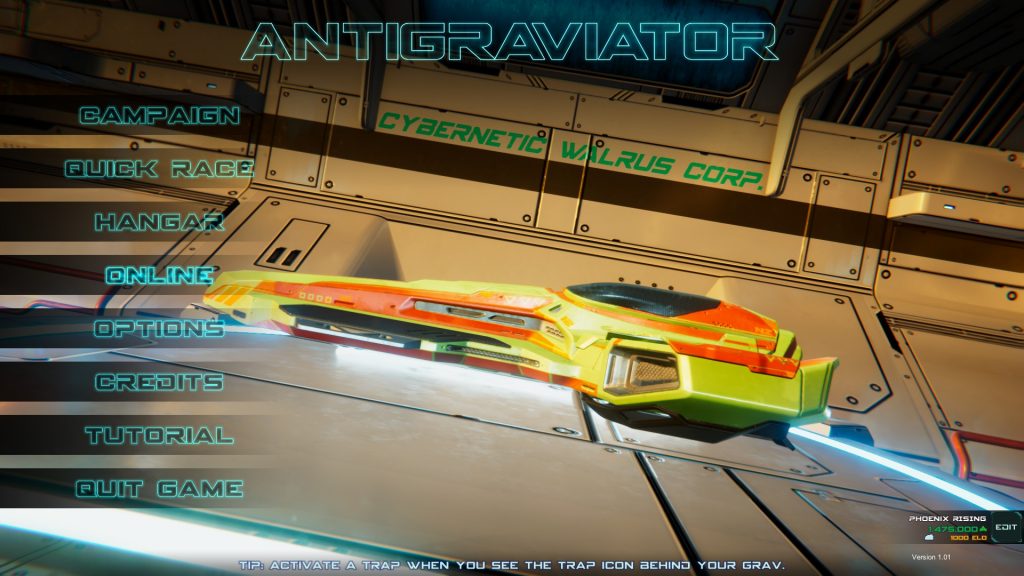 I spent a lot of time here just listening to the awesome menu music.

Antigraviator, like most racers, is clean as can be. 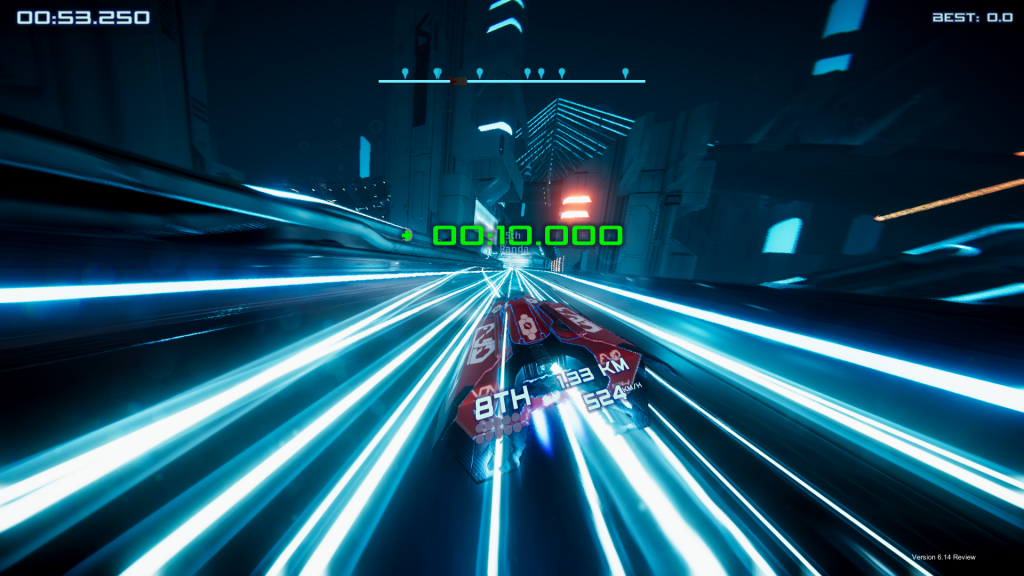 Objects in screenshot actually are as fast as they appear.

Considering the aforementioned competition in the genre of futuristic racer, it would be ideal for Antigraviator to begin by making an immediate and profound impression. It accomplishes this expectation by way of simplicity. I was inattentive in my first race through the automatically forced tutorial after startup; it is merely a pleasant cruise through a practice track. The airbrake function for handling tight turns is to be expected in an anti-gravity racer, as are the speed boost pads found on the racetrack.

I missed a few wrinkles that Antigraviator offers, and re-did the tutorial to gain a better grasp of its concepts. One entails the ship storage system; the default ship comes equipped with ten slots in which one can collect power cells during a race. These have two uses: turbo boosting, and traps.

What prevents Antigraviator from joining the ranks of GOTY contenders are the crashes like the one at 10:20.

Turbo boosting is self-explanatory, yet it does not convey its impact as potently as I am accustomed to experiencing in other games. Oftentimes, when I boosted, I could tell that I was moving faster as I could visually see that I was moving through the environment more rapidly. Yet when in close proximity of other AI racers I wonder if they were scripted to use boosts when I do, resulting in my struggles to pass them. Looking at the statistics at the end of a race, however, confirms that the tougher racers do indeed use boosts….

Traps are Antigraviator‘s  version of “weapons.” In lieu of players picking up and using weapons at their discretion, and for the same cost of two power cells used to turbo boost, one can instead activate a trap on the track. I am not completely certain at what point on any particular track where a trap can be activated, but I know that if one feels like a trap is nearby, they should spam the activation button, because only one participant will get credit for trap activation, and that comes in the form of shield around their ship, which is designed to protect them taking damage from the consequential chaos.

I also know that when I am in first place, I do not recall ever being able to activate a trap, but I do end up getting hit by them, in Mario Kart blue turtle shell style, though the missile is significantly less devastating. One of my favorite traps to activate, but one of the worst to get caught in, causes an avalanche of square blocks onto the track. When traveling near the speed of sound, traps are difficult to avoid and can cause ships to slow down or crash and force a respawn. Similarly hazardous are laser walls that vaporize any ships that pass through, and magnets that pull ships into the walls—both are deadly enough to force a respawns. In the videos that I have recorded myself playing, I complain that it is “not possible” to avoid certain traps as they are placed into the line. Even so, the MC warns when traps are available and activated; a more skilled player would have memorized the track over time, and know how to overcome these things.

The lack of focus on weapons, enforced by not allowing players to carry them around, compels players to be judicious in their utilization of turbo boosts or activating traps. This discretion also applies to the type specifications of each “grav” racer that one can choose. The default ship is the Thunderbolt class grav; the X1Z1 and Crooco classes can be unlocked, but for what is at first an exorbitant fee. Another way to think about these ships at their base level is, “shields,” “handling,” and “speed.” On one end of the spectrum, the Thunderbolt is “slow,” but has high shields. As much as I like to race sloppily by grinding walls, I was comfortable with it as my first love. I did not even realize it was possible to crash my ship until I tried racing with the X1Z1 and hit the same wall that I always hit during a race.

With only three gravs, the upgrade system is equally simplistic. Still, I caution readers to not mistake simplicity for a lack of depth. Upgrades come at a price. First, one must win races to earn credits. This might sound like a “duh,” but races cost entry fees, and I cannot recall the last time I played a game that required them. I actually ended up having to race the novice tier race about three times because I used my earnings from winning on an upgrade, and did not have enough to enter the next racing tier! Frustrated, but lesson learned, I also noticed that some upgrades increase one stat, such as speed, but decrease another, such as storage capacity for power cells.

Multiplayer was dead while I was writing my review pre-release. It offers a ranked and casual mode, but of course, its population is contingent upon how popular Antigraviator becomes. Besides a lack of pedigree, if gamers give it a chance beyond lack of name recognition, they will find here a game that takes the best of its competitors—the outrageous speed of Redout and the presentation of wipEout—and presents them in a single package. While it is true that Antigraviator lacks the modes of those games, it offers thirty tracks, which is more than the average without including DLC. Its music is top notch too. There is not a single track that I would consider bad; and “Nevemale Pass,” “Serpentine Valley,” and “Spiral Drop” are all good enough to be placed on my playlists for when I play any anti-grav racer. My only gripe is that the tracks are short, averaging about two minutes each; I wish they were as long as “Antigraviator (Main Theme),” at three minutes. For added fun, “Square Creek” sounds like it was sampled from Splatoon, and “Vengo Canyon”  reminds me of “Pi” from Need for Speed III: High Stakes.

Evoking legends such as the NFS series in the music department is the highest of goals, and Antigraviator achieves them. Every track is impressively detailed such that some of them could pass for wipEout courses. And most importantly, this game is fast. I highly recommend this racer.

Antigraviator is the kind of game that does not necessarily do anything new, but happens to perform all the old tricks that one would come to expect from an anti-grav racer with aplomb.