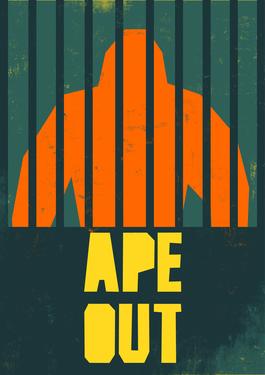 I’m not going to lie—I was jazzed to play Ape Out when it was first announced. It’s a little embarrassing that I took so long to play it considering its soundtrack; Ape Out was lauded for its dynamic jazz soundtrack which reacts to every player action during the game. The game is even styled like a set of vinyl albums for its levels. But a game is more than its music, so let’s break it down (no monkey rap, sorry). 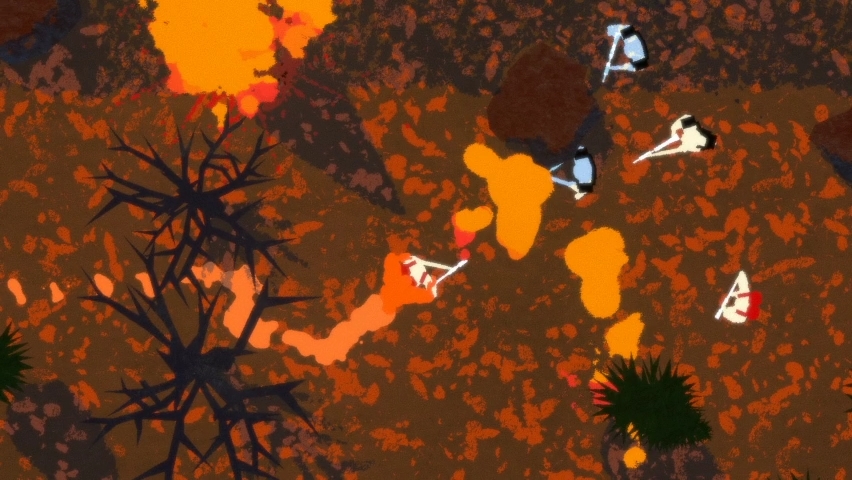 Strong Violence: The player controls an ape that can grab or shove human enemies. The player can choose to avoid enemies for a pacifist run, although that is difficult to accomplish. Aside from that, the enemies can die from being thrown into a wall, into bigger enemies, or out of a window, as well as via a variety of other methods such as gunfire, explosions, flames. Blood effects and explosion burns are used very liberally in the game’s art style to contrast damage taken by the ape, whose blood is colored orange like its own body. In later sections, there are also airstrikes that both the player and enemies can die from. In the last level, the player can free other animals such as tigers, bears, and snakes, which can maul other humans. 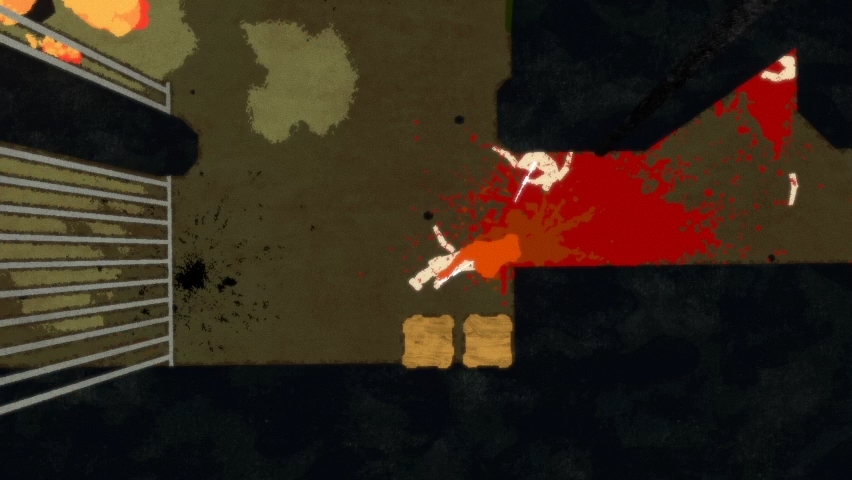 Ape Out delivers a simple yet challenging loop of gorilla-rumbling action. It’s been praised for its minimalist art style and album-oriented percussive jazz music that influences the dynamic sound design as the player progresses. The game was well-received for these elements at the time of its release, but while they are significant in their execution, I found them to be lacking in the game’s experience as a whole. 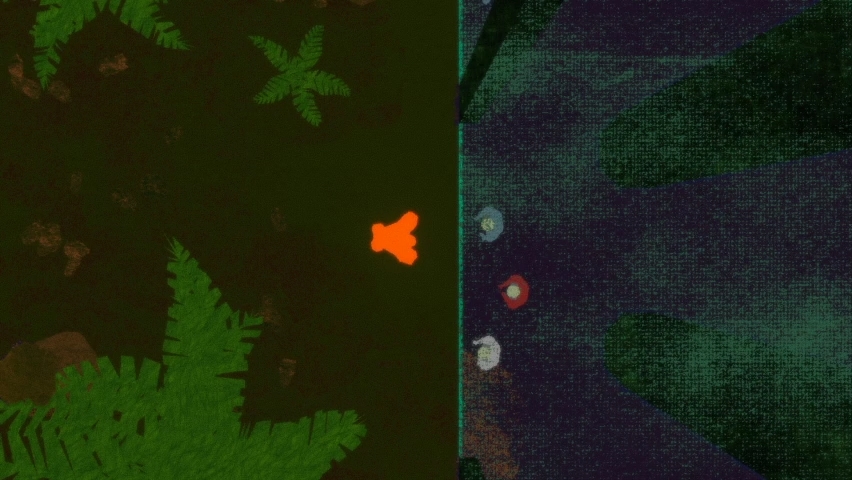 “Here we see, a critic. It often expresses opinions on things most people disagree with.”

Ape Out starts off on a strong first impression. As the game loads and some initial credits roll, you hear bits and pieces of instrumental warm-up and tuning. As it cuts to the first level and you are introduced to your player character, an ape in captivity, you see other apes in cages, most likely dead. Escape jumps into your mind and the only way out is to break the glass panel in front of you. As soon as you do, the music kicks in as “APE OUT” explodes onto the screen. The game establishes its bombastic energy and entices you to keep the music going by building or cooling it down through each level. 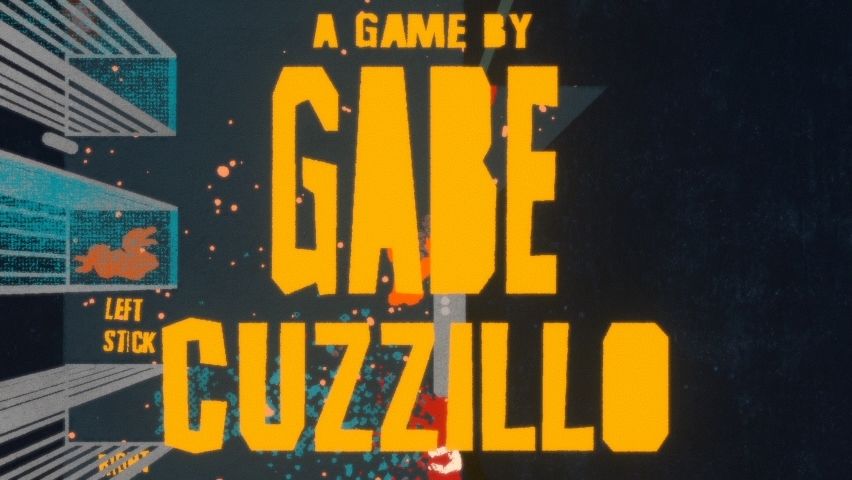 Gotta admit. The typography is on point. 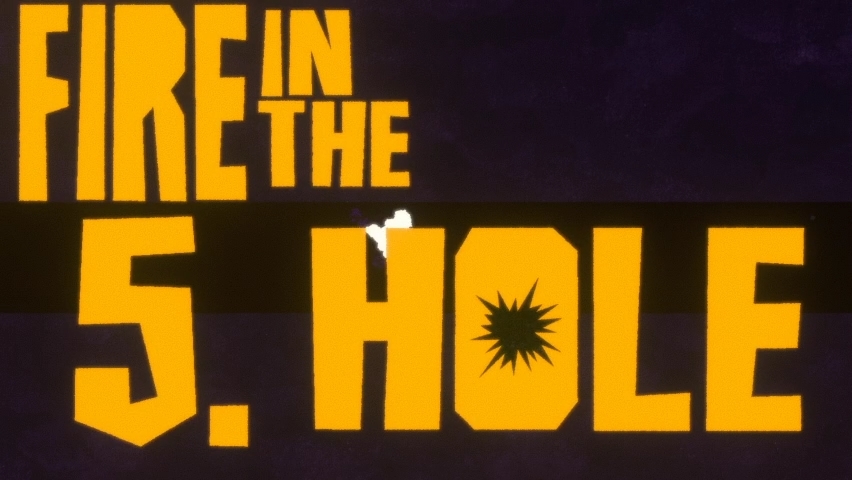 The visual art was contributed by Bennett Foddy (QWOP, Getting Over It with Bennett Foddy), while Matt Boch composed the sound and music. They work in tandem to achieve a wonderful aesthetic. They also work to elevate the mechanical aspects, too.

The minimalist art style highlights important details like enemy placement, interactable items, and the exit. The sound design heightens the tension when traversing a level. The tinge of the gun reloads indicates when enemies will fire. Breaking glass or windows notify enemies that you’re nearby and the snare drum kicks in to signal enemy awareness. 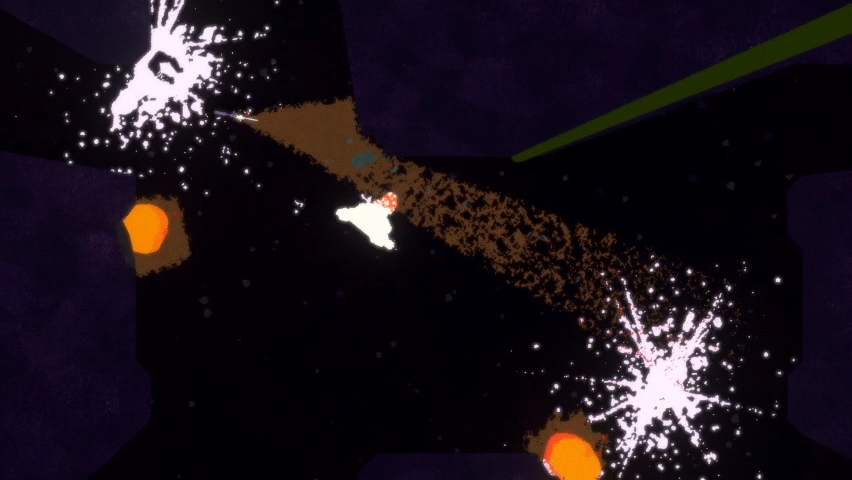 This level in the dark was a lot of fun. The soundtrack is even subdued for this part. 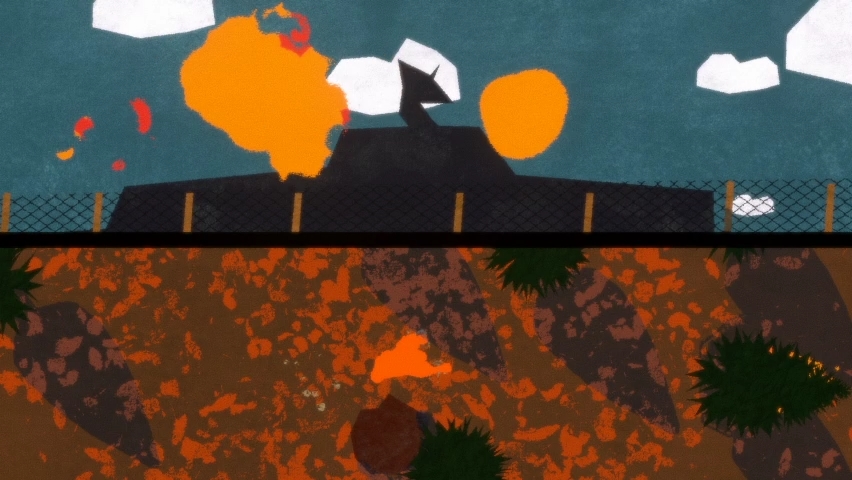 The presentation pulls its weight.

All the aesthetics are fine-tuned to give the player as much contextual feedback and information as possible. It’s genuinely impressive yet odd that it doesn’t extend to the control tutorial. The player is just told outright with text despite many games using icons instead. It seems overlooked compared to the rest of the game where the only text displayed is the title, levels and worlds (given song and album titles respectively), and the credits. 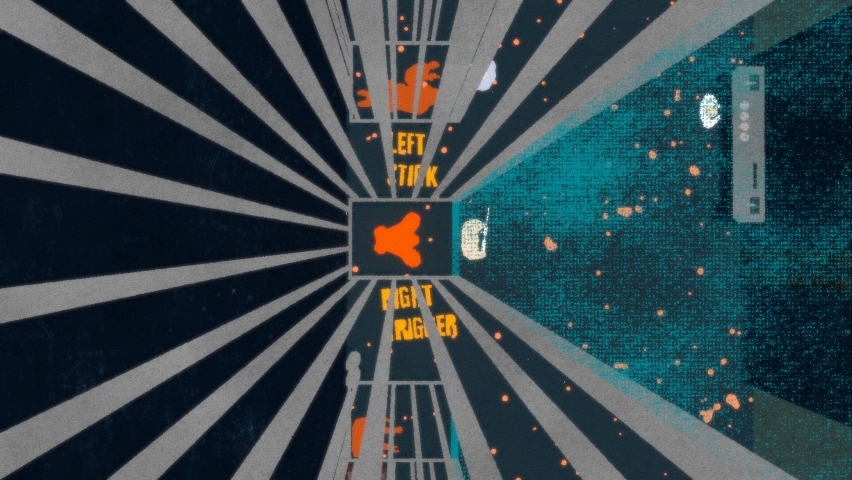 “I will escape this prison. By the way, use these buttons to control me!”

Gameplay is straightforward. There are four “albums” (worlds) with eight songs (levels) each. Presented in a top-down view, the player traverses through levels along a horizontally-aligned maze. Ape Out controls like a twin-stick shooter, though you mainly need the left analog stick to move. 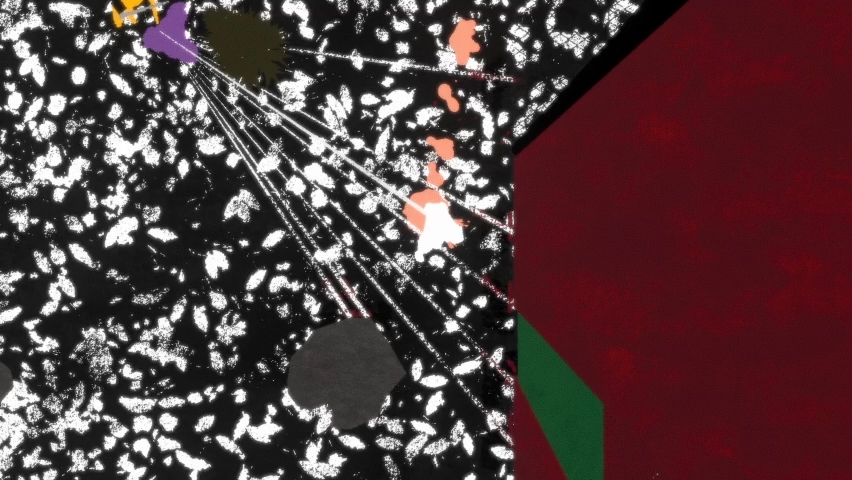 I was so close here and was very upset.

I’m not a fan of the randomly-generated enemy spawning. It wasn’t poorly balanced, but I would often die to an enemy placed in my way and thought it unfair. Not to mention, enemy placement and the map are regenerated every time. This can lead to unwinnable situations depending on the path you take.

On top of that, if you recognize that a top, middle, and bottom path must generate in the level map, you can mainly stick to one side. Backtracking is a safer option if you see enemies that you have trouble with. However, it feels counter-intuitive to the aggressive play Ape Out encourages. 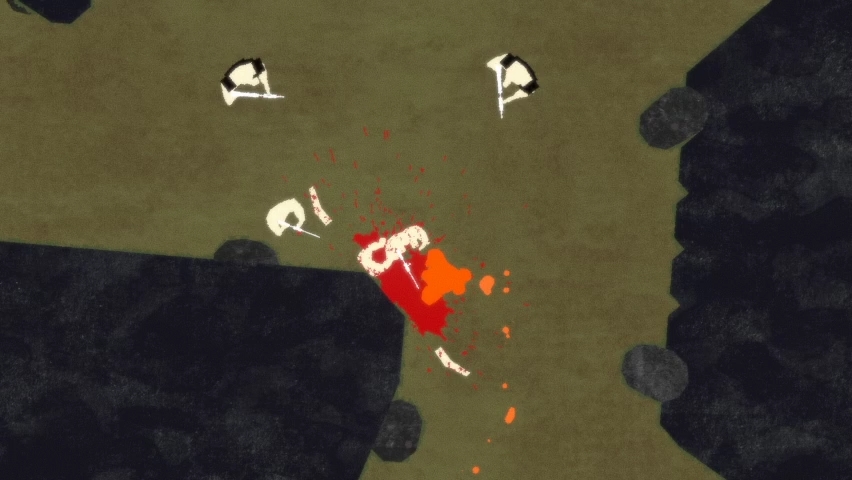 This was a rough situation. Almost no chance of escape due to how accurate gun shots can be. 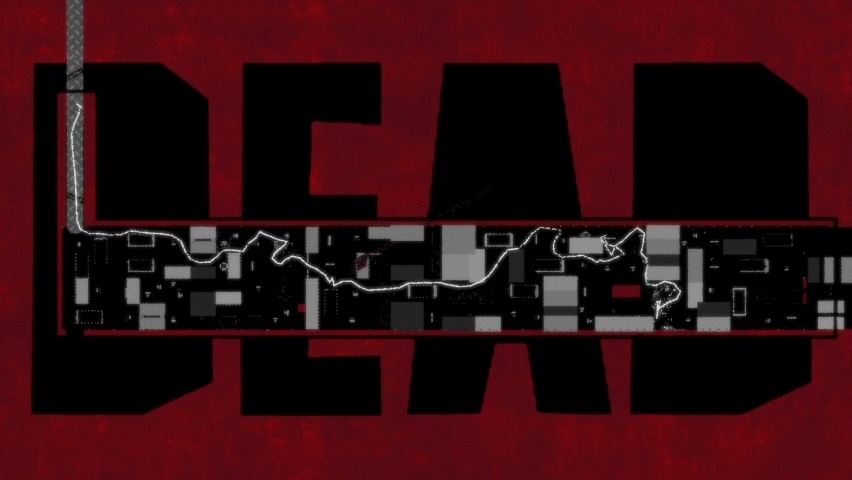 You’ll notice that I’ll usually stick to one side until I absolutely have to move away.

I enjoyed the music as well, being a fan of percussion. But I started to tune it out when I was stuck on certain levels. No particular track stood out to me past the first album and the final level. Near the end, I was starting to enjoy the game more, and then I beat the final level thinking to myself, “That’s it?” I was honestly disappointed because I liked the option to free the animals from their cages in the final level. It had a lot of potential as a new mechanic for another album. 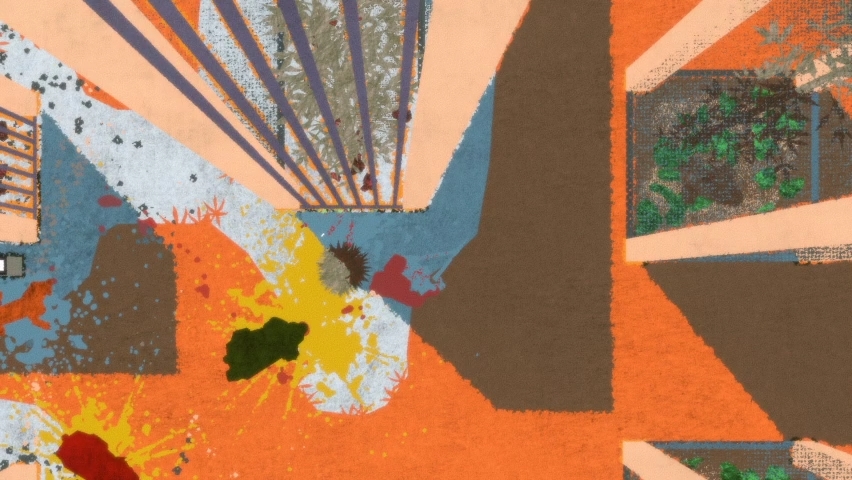 I do love when the game changes color schemes. I still appreciate the minimalist art style.

Ultimately, it was my own fault for buying into the hype from the articles and podcasts I follow that set my expectations too high. I did enjoy my time with Ape Out. I think the game is competent and executed all of the things it wanted to do, but I struggle to rate it highly. I still recommend the game and would like to see a sequel expand upon this concept with a few more mechanics involved. 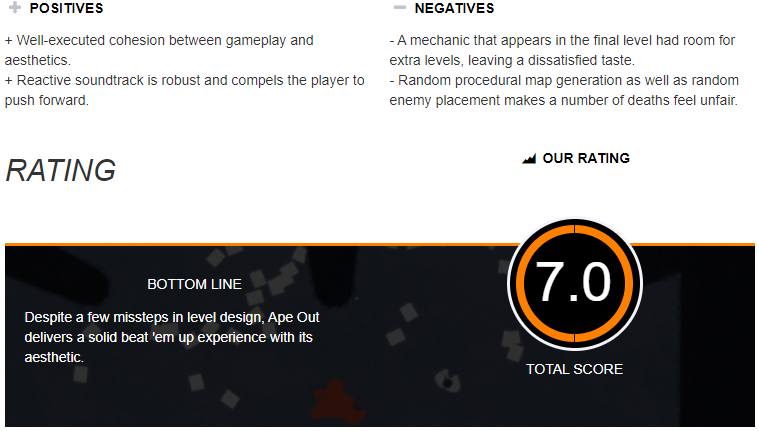 Despite a few missteps in level design, Ape Out delivers a solid beat 'em up experience with its aesthetic.