Apex Legends has recently captured the spotlight in the gaming industry as the latest hotness in the battle royale genre, a trendy, moving target that many publishers would love to tap into. Game publishers are frequently producing new battle royale all the time so for Apex Legends to set itself apart in the course of a weekend is impressive. Apex Legends has already begun to challenge some of the more popular battle royale games like PUBG and Fortnite. Respawn Entertainment released Apex Legends unexpectedly as gamers were waiting for details on Titanfall 3. Respawn has also released a roadmap for the coming year to expand Apex Legends with new legends, guns, and loot which looks good for the future of the game.

Apex Legends is a multiplayer first-person shooter (FPS) that is rated T for Teen. Naturally, players will use guns and explosives against each other. When a player gets hit by a round or explosion there is a red mist. After a player dies their body disappears and a crate of their gear is left behind. Players can perform finishing moves on an opponent such as stabbing them which is seen through the victims perspective. Respawn has also publicly stated that two of the characters are LGBTQ. I could only find reference to the sexual preference in the bios of the legends, but there was nothing apparent in the gameplay. Apex Legends also contains loot boxes which contain skins, character tags, and other cosmetic items.

Apex Legends is set in the Titanfall universe. Several years after the Titan War, the Interstellar Manufacturing Company (IMC) and the Frontier Militia are gone taking everything of value with them. People living on the Frontier were left with little choice than to look for worlds with the resources they needed to survive. They moved to the edge of the Frontier known as the Outlands. The Outlands were not ravaged by the Titan War and are abundant with resources. Life in the Outlands is still harsh and brutal, so the people there decide to settle disputes not through full-scale military conflict but with small groups of combatants. These combatants compete in the Apex. The ones who can survive go one to become Apex Legends.

The battle royale genre of games is already populated with a lot of games. Apex Legends arrived into the arena unexpectedly with little hype before launch. What sets Apex Legends apart from many of the other battle royale games is its squad-based tactical gameplay and unique characters. The game begins with sixty players being divided up into twenty-three player squads. Each squad of players then gets to pick from the current roster of Legends one at a time, and once a character has been picked by a player no other squad member on that team is allowed to pick that character.

The last player to pick a character in the squad is designated the jumpmaster. When the game starts each squad launches from the dropship, and the jumpmaster controls when the squad jumps and where they land. A jumpmaster can give up the position to another player or players can land solo. The real fun of Apex Legends begins once the squads hit the ground. Players can communicate with each other designating the position of weapons and items as well as pointing out enemies. During gameplay, players who are knocked down by enemies can be revived or respawned by their squad mates. A winning squad is one that stays together, works together, and communicates with each other throughout the game.

Jumping into the action

The current roster of Legends is eight, and each character comes with unique abilities. Legends have a passive, a tactical, and an ultimate ability. For instance, Bloodhound is a tracker with the passive ability to see enemy tracks, the tactical ability to see enemy silhouettes even behind objects, and the ultimate ability to move fast and track an enemy. Lifeline the combat medic has a healing drone as well as the ability to revive squad members faster. The tactical and ultimate abilities have cool down periods while the passive ability is always on. None of the abilities are duplicated and Respawn Entertainment has stated that in future seasons more Legends will be revealed. 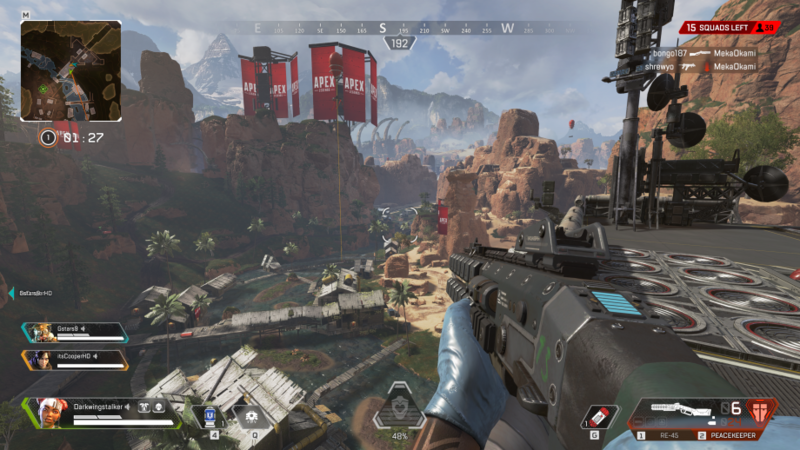 The gameplay in Apex Legends is based on fast-paced first-person movement and gunplay of Titanfall 1 and 2. Legends move fast, jump, and slide around the terrain. There is no wall running in Apex Legends which is disappointing, but there is hope that a later character may have that ability. The guns are all the same guns from Titanfall, but there are no heavy weapons or anti-Titan weapons in Apex Legends. There are no Titans in the game, either. All the weapons can be upgraded during gameplay with sights, stocks, and barrels. Players can only carry two weapons on them at any time as well as grenades and fire-stars. The controls for the game are very tight and responsive. There is a drawback with all the commands when playing with a controller. In order to communicate the location of objects to squad-mates, a player can line up a reticle dot then use a shoulder button to tag the object. Hold down the shoulder button and a menu of tags comes up. Hold down some of the d-pad buttons and there are more menus. The controls are responsive, but in the middle of combat I found myself picking the wrong item with so many menus.

Apex Legends is one more game in a growing list of battle royale games. There will be a season pass allowing players to access new Legends and weapons which could turn players away given EA’s reputation for in-game purchases. Apex Legends success may also create problems for parent company EA who has plans to release Anthem in a couple weeks as well as another battle royal game, Battlefield V Firestorm, this year.