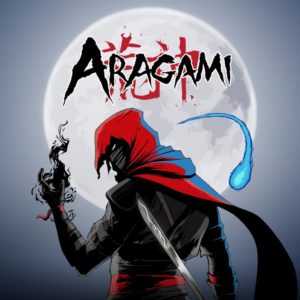 It has been ten years…ten years (!!!) since the gaming industry enjoyed a Tenchu game. Tenchu: Shadow Assassins was released in 2009 for the Nintendo Wii in Japan. Its absence has left a wakizashi blade-sized hole in my heart. Klei Entertainment did the world a solid by releasing Mark of the Ninja (2012), one of the greatest stealth games ever made, and certainly the best in 2D. It is possible that through Mark of the Ninja‘s success, Lince Works recognized that there is a demand for stealthy ninja games, and have therefore brought forth Aragami. 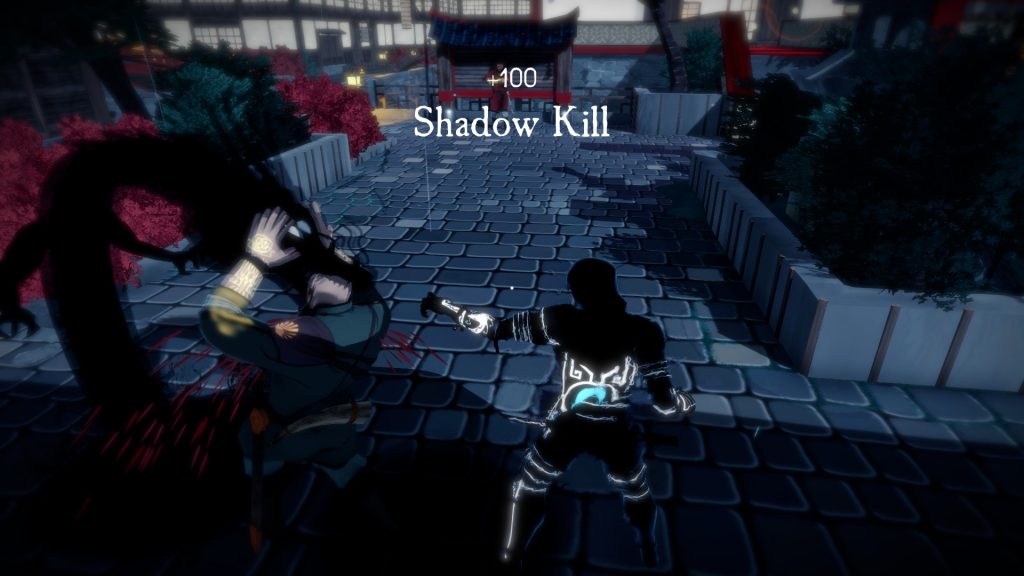 Mortal Kombat fans might remember this throwback, but with significantly less blood.

As Aragami is a stealth-based ninja game, there will be assassinations. Though the game is rated M, I feel that T for Teen would be more appropriate; when Aragami stealth kills a foe, blood is minimal. The physical animations and sound effects of Aragami’s blade piercing flesh and bone is more violent than the red droplets pouring from an unsuspecting enemy. The original Tenchu on PS1 contains more of the red stuff than what is featured here. 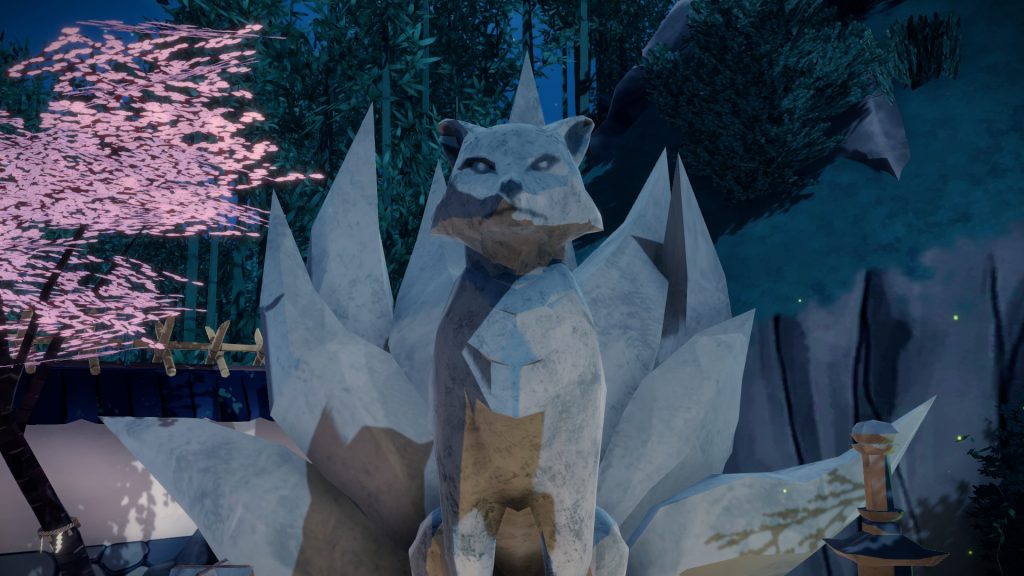 The icon of Kitsune appears, but the impact of its symbolism is minimal.

There are some nascent spiritual matters worth noting. Aragami is a spirit of vengeance summoned by means of magic and sorcery. Forces of darkness and light waging a seemingly eternal, catastrophic war is a featured motif. This is a game that might argue that those who live by the sword will die by the sword.

Lastly, there is one usage of the d-word in a cutscene. 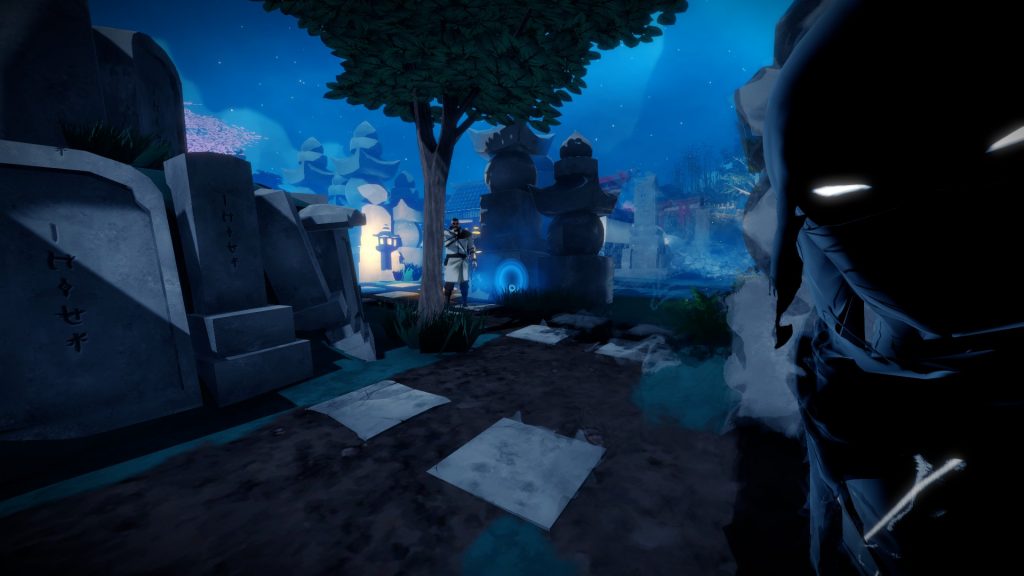 One day, when night casts its first shadow, the astral projection of a young-looking priestess girl named Yamiko evokes into existence the titular Aragami. She tells him that he is a spirit of vengeance who she summoned in the hopes that he would liberate her and her empress from the Kaiho clan, an army that defeated her shadow clan by wielding light as a weapon. To accomplish this mission, Aragami will have to retrieve six talismans to free her. Aragami proceeds on this quest, assassinating Kaiho soldiers along the way. However, upon arriving at these intermittent goals, the talismans appear to be artifacts and mementos. When Aragami comes into contact with one, he experiences a flashback to a past memory. The first among them belong to Yamiko, who explains that he experiences these flashbacks because a part of her soul exists within him. Yet, he begins to see other visions too, concerning a certain warrior who can wield the light. Who is that person? 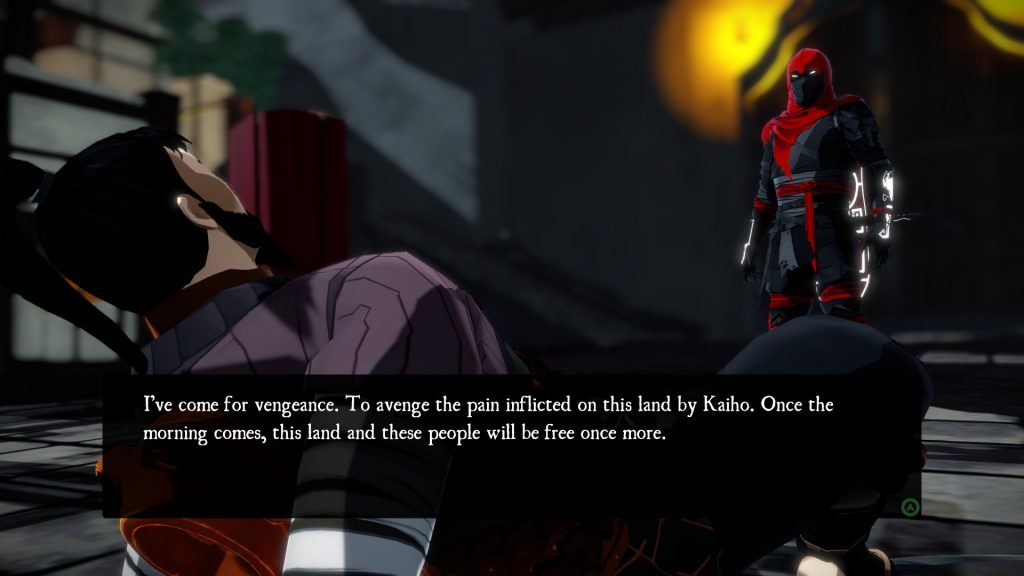 As Aragami is a stealth game, the general rule of staying out of the light to decrease the chance of being seen applies. Staying out of the light is of the utmost importance in this game. Not only does Aragami draw power called Spirit Essence from the shadow, but also, Kaiho soldiers can OHKO him with a short-ranged light attack similar to the magic attack Link gains in a Zelda game when he is at full health. Taking after what I consider a critical design flaw, Aragami barrows from Tenchu: Shadow Assassins, and does not allow players to engage in direct combat with enemies—not even bosses. 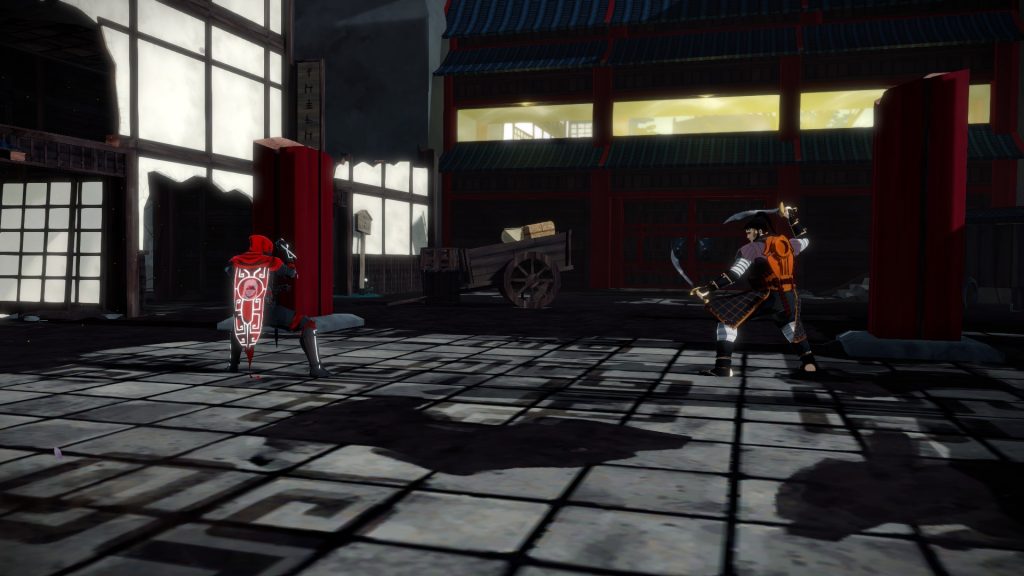 It would have been cool to have an actual fight. This is only a cutscene.

While I appreciate the heavy emphasis on stealth, especially when striking bosses while unseen multiple times like a genuine shadow assassin, the standard gameplay loop in Aragami becomes stale by the halfway mark, if not sooner. Besides assailing foes from elevation, players do not have control over which stealth kill animation Aragami executes. Additionally, every level is lousy with enemies, so those who choose to clear the entire map have their work cut out for them. The fact that most of them are identical in design certainly does not ease the repetition, for only a few units are given unique character models. 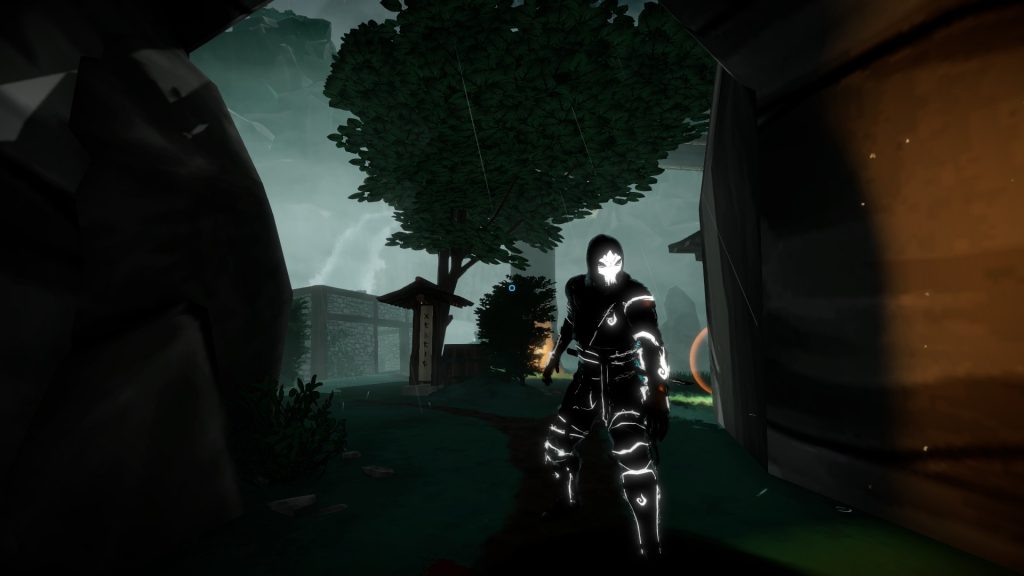 After a certain number of qualifiers (and free DLC), I was able to unlock this Punisher tribute for an outfit.

Contributing to this gameplay loop is a severe lack of verticality. Mark of the Ninja takes advantage of its 2D space by allowing one to hide behind doors, or take out enemies from air vents, from above or below. Tenchu consistently encourages gamers to take to the rooftops by making the grappling hook a default item. These factors contribute to gameplay variety. Aragami is primarily a horizontal game, lacking a jump button or a grappling hook, so one must use Shadow Essence to Shadow Leap (teleport) where there is darkness. The developers at Lince Works certainly wanted players to use and abuse this teleport mechanic by enabling them to create shadows virtually anywhere, but this does not alleviate the game’s restrictive feel. 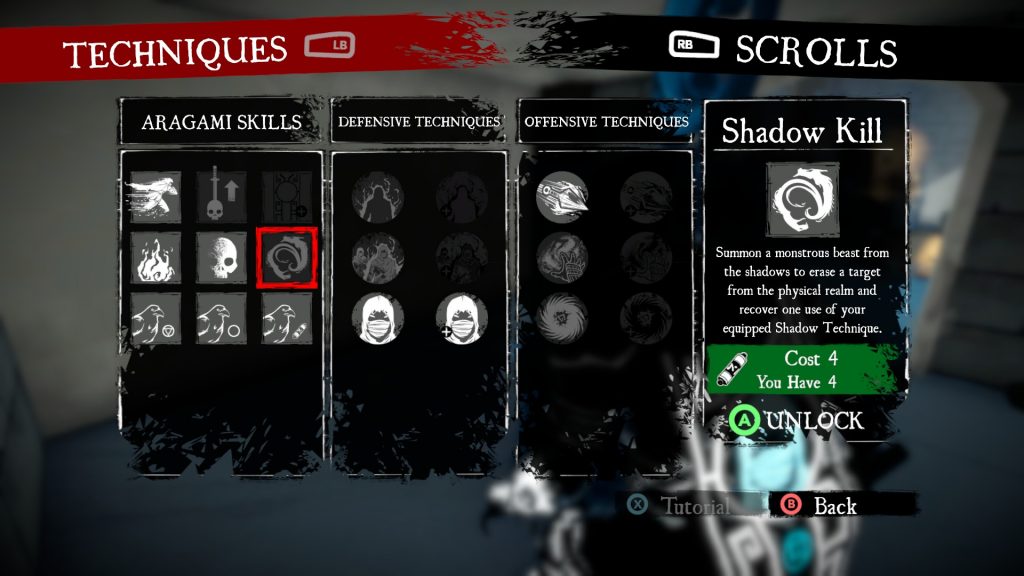 From early in the game, I wanted that dragon stealth kill.

The original Tenchu, along with its PS2 sequels, are famous for their soundtracks. “Far Away” still finds itself on modern playlists. Aragami includes what one should expect to set the ambiance of feudal Japan, yet only three songs are noteworthy. “Aragami (Main Theme),” “Clash of Light and Shadows,” and “The Path of Shadows” are those standouts. Even when Okami began to wear on me when it would endure two acts longer than it should have, I could press forward, knowing that the soundtrack would inspire me. This does not happen in Aragami, especially when the levels shift from sleepy courtyards, decorated graveyards, and…basic yards, to indoor areas whose plain designs remind me of something like a player-generated map. 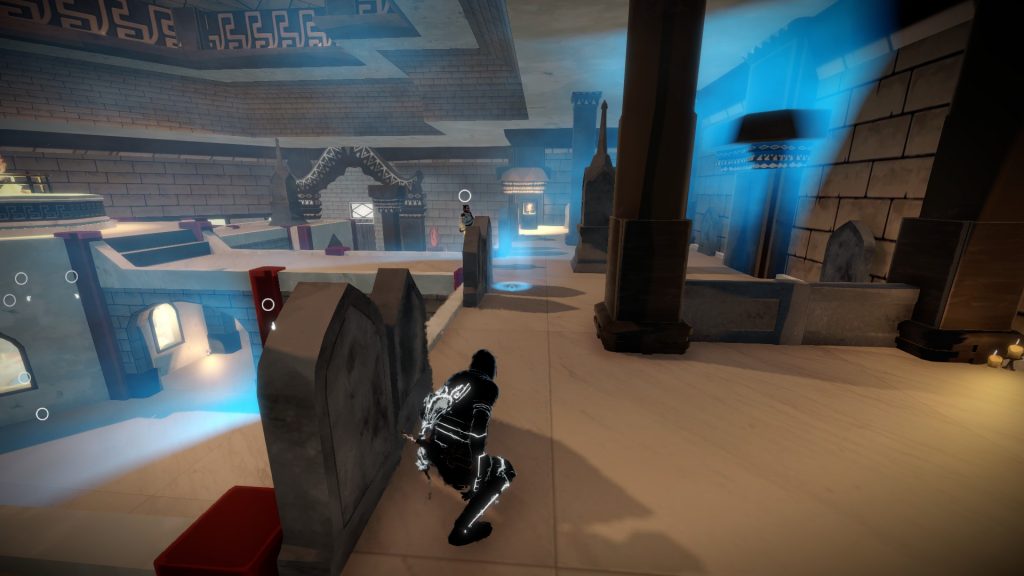 The environmental textures are plain and lacking in verve.

All of this certainly sounds overwhelmingly negative. I want to pause to say that Aragami is not a bad game; it is simply a game that unintentionally reminds me that it is an indie creation. Admittedly, I approached Aragami expecting it to serve as a proxy for Tenchu Stealth Assassins, rather than appreciate it as its own game. And there is indeed merit to be found here. 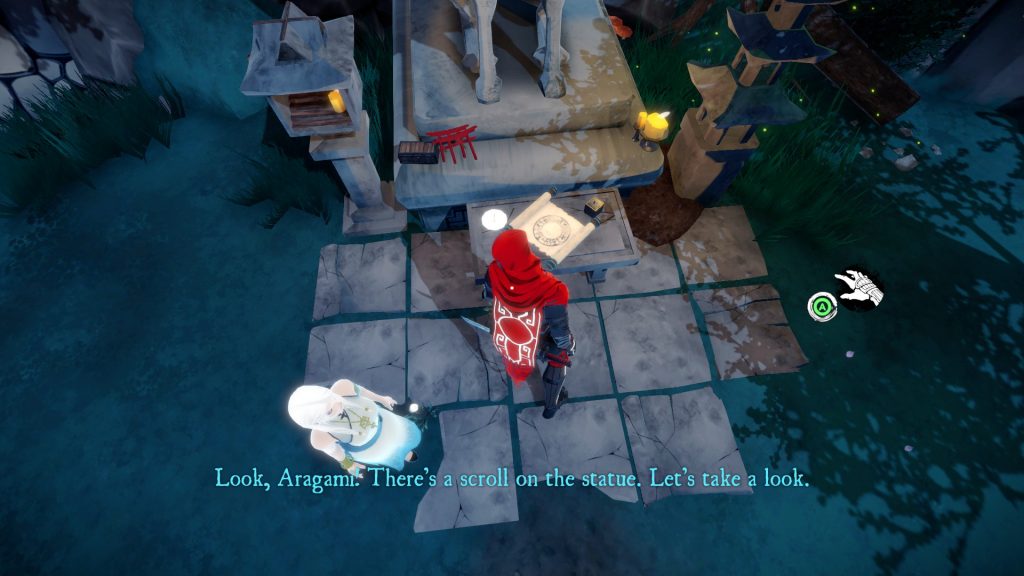 Collect scrolls that are usually more hidden than this one to unlock more Shadow, Demon, and Ghost techniques.

As a spirit of shadow, Aragami comes with analogous abilities that ameliorate his mission. By utilizing Shadow Essence, a power whose quantity is measured by the illuminated symbols on his Journey-like cape, the specter can evoke several powers. I have already mentioned the teleport called Shadow Leap, which allows players to close the gap on Kaiho soldiers when a sprint would be inadequate, as well as Shadow Creation. Shadow Vanish does precisely what it says, but  Shadow Kill is even better. It is a high-level Aragami skill that summons the dragon seen in the Content Guide; not only does it make the guard’s body disappear, but it also restores shadow essence, so that Aragami can use offensive techniques such as the kuni, a ranged OHKO, or Shinen, a black hole trap that can eliminate more than one solder at a time. These are but a sample of Aragami’s possible skill set. 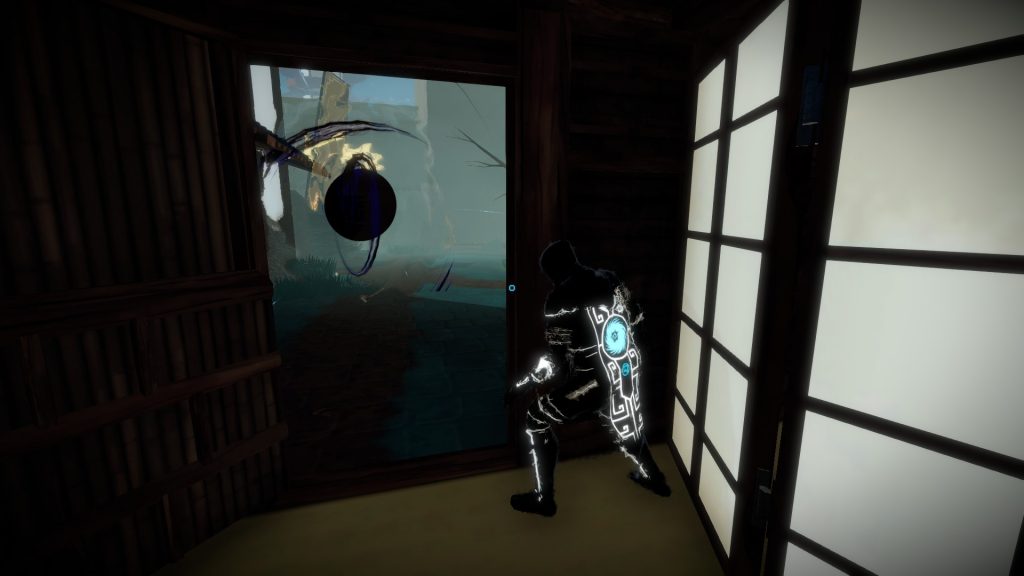 I would like to emphasize that the story is very good. Like Shadow Warrior, a title whose name would coincidentally be appropriate for this game, Aragami’s uneven gameplay serves to move a plot that tugged a little on my emotions. And if it gave me reason to pause and ponder, I am certain that the average gamer will certainly be impacted by not just its grand revelation, but particularly its resolution. 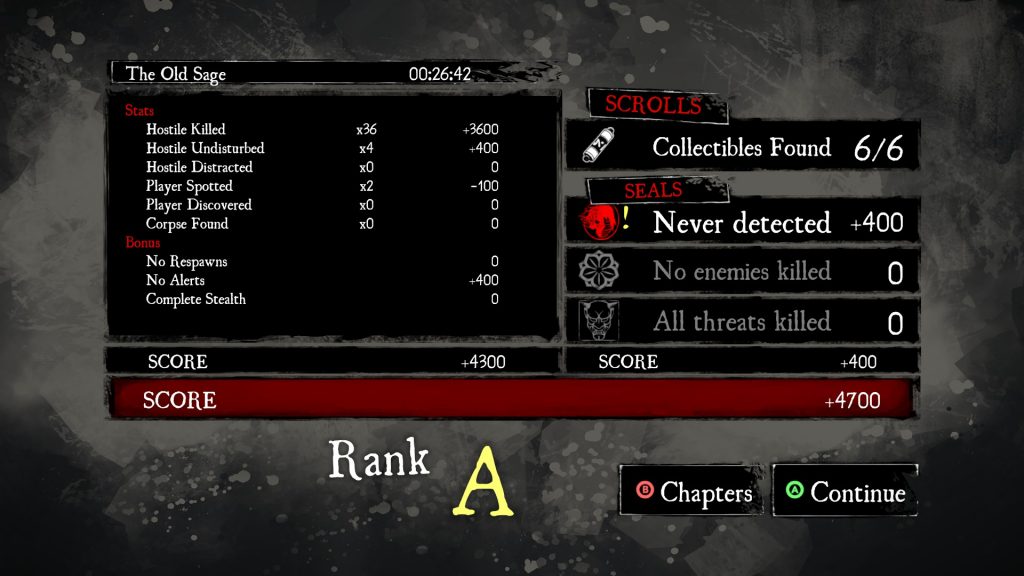 Even the score is a nostalgic reminder of Tenchu.

While I feel that Tenchu is a much better franchise than the industry has given it credit, I perceive Aragami in a similar light: good, almost great. It certainly works effectively as a sort of placebo, but Aragami lacks the personality of Rikimaru, Ayame, Tatsumaru, Rin, or even Tesshu, despite the payoff of its ending. Perhaps the upcoming DLC, Nightfall, will provide the kind of character depth that matches Yamiko’s, as well as gameplay more reminiscent of my favorite dead franchise. 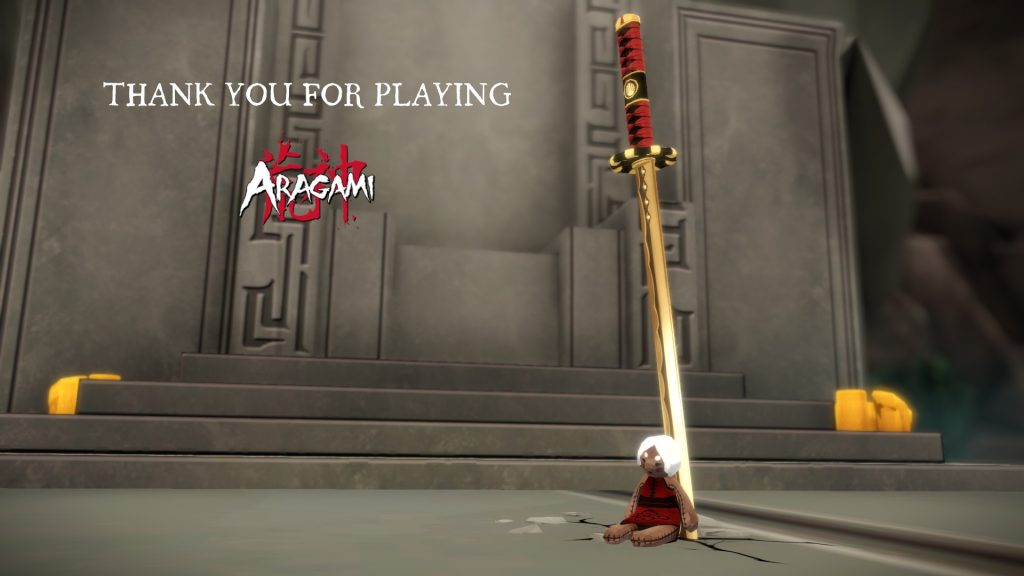 Review code generously provided by Joe Morgan as a gift.

Aragami upholds the expectations of the now-retro franchise from which it was inspired, but struggles to exceed them.