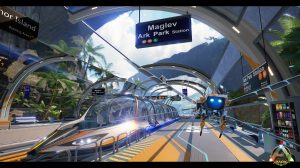 ARK Park is a virtual reality spin-off of the popular survival title ARK: Survival Evolved. In Survival Evolved, you are tasked with surviving in a hostile environment. In ARK Park, you take a short tour through the world of ARK without worrying about actual survival.

Violence: There are Battle missions where you can go solo or team up with other players to defend a brainwave tower from rampant dinos. There is some mild blood from where you shoot the dinosaurs. You can use bows, spears, explosives and guns for dispatching purposes.

ARK Park is a game set in the same universe as the popular survival title developed by Studio Wildcard, ARK: Survival Evolved. There, you start with nothing and survive by scavenging and fighting to get the materials you need to level up. In ARK Park, you start at a monorail station where you choose to go to multiple locations to check out the different kinds of wildlife and biomes available to view in the park. There is quite a difference between the two titles as you may see. There are similarities too. In both titles, you can fight, tame, and ride dinosaurs, play in first person, and the visual aesthetic is about the same as well. Sadly, this is about where the similarities stop. 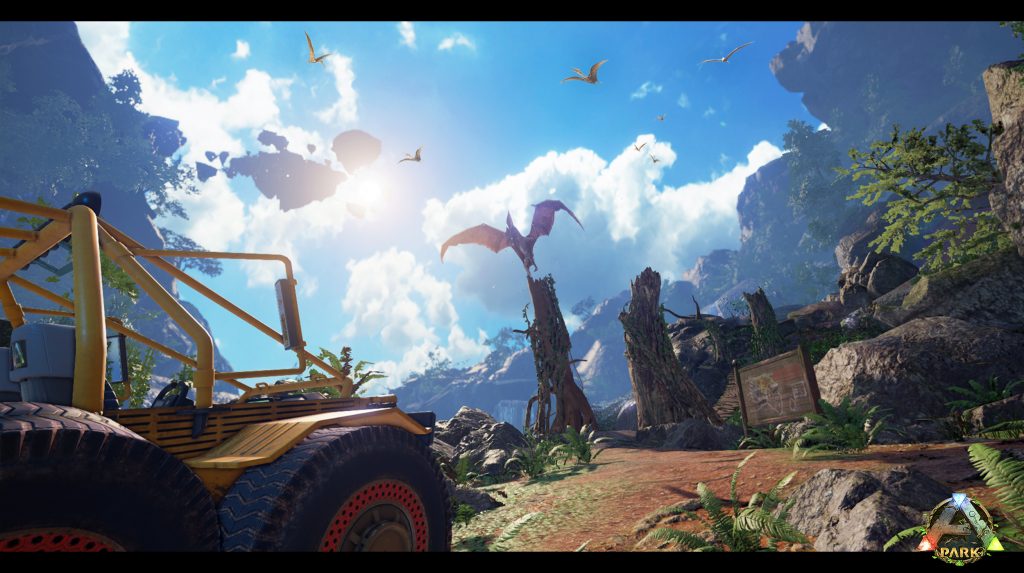 The park features many areas for you to explore. While they are not big in and of themselves, they are present. The Visitor’s Lobby shows you an overall map of the whole park and displays where you learn about the major dinosaurs that live there. The Forest Trail is where you manage your inventory, tame dinosaurs, and craft weapons and gear. These are just the facility locations to view. The actual exploration locations are where you get to see the actual wildlife and mildly interact. Each of these areas feature differing animals from which you can scan and collect genes. These genes are then used to unlock blueprints for you to craft items. These items can then be used to find more wildlife in each area. It may sound interesting to some, but it is nothing more than a glorified fetch quest fr nobody.

Speaking of nobody, the entire game has no plot and there are no other characters. You are dropped off in the world to have the freedom to do as you please. While it it nice to just relax and not worry about emotional investment, it still gives you no reason to play it unless you are totally in love with the world of ARK. The emptiness makes a world full of wildlife feel hollow. 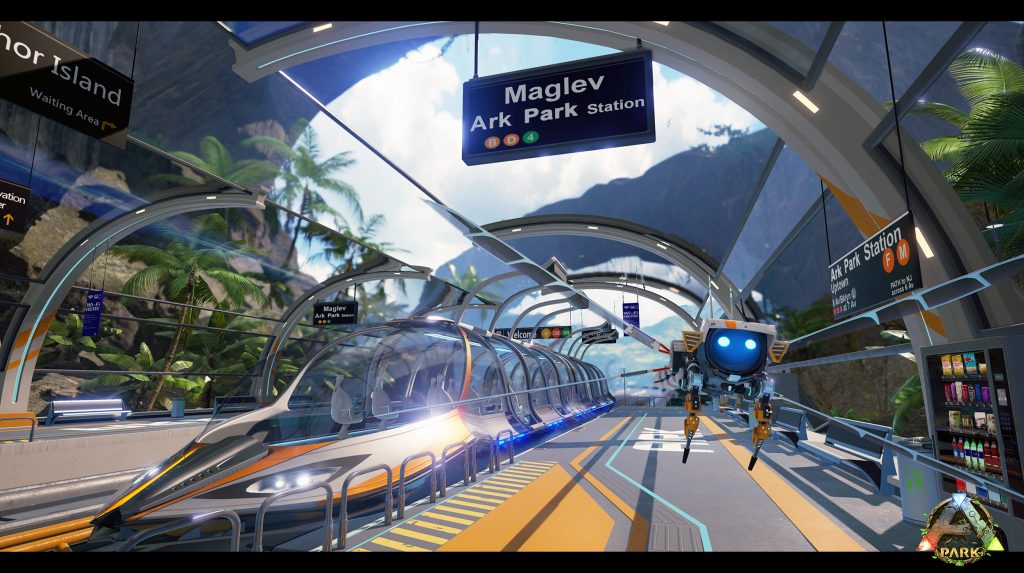 There is some excitement to be found in battle though. As mentioned before, you fight off waves of rampaging dinosaurs trying to destroy the towers that keep them dinosaurs from going crazy while your drone fixes it. At times, you are taking the creatures down with ease, and the next, you are nearly overwhelmed on which one to shoot next. It is nice to have some real action happening to break up the lulls of everything else. Sadly, there are only two different maps to play with three difficulties to play for each.

That is all there is to do in ARK Park, and the activities from single player are the same as multiplayer with the same progression. It is hard to tell if the multiplayer is fun or not with friends or strangers since the servers are ghost towns. Either that, or you must manually invite people instead of match-make. You can never really tell as the menu is confusing and never tells you what a button does in the multiplayer menu. Your character does not carry over between single and multi player either; given there is no real leveling up or ranking this is an odd choice. 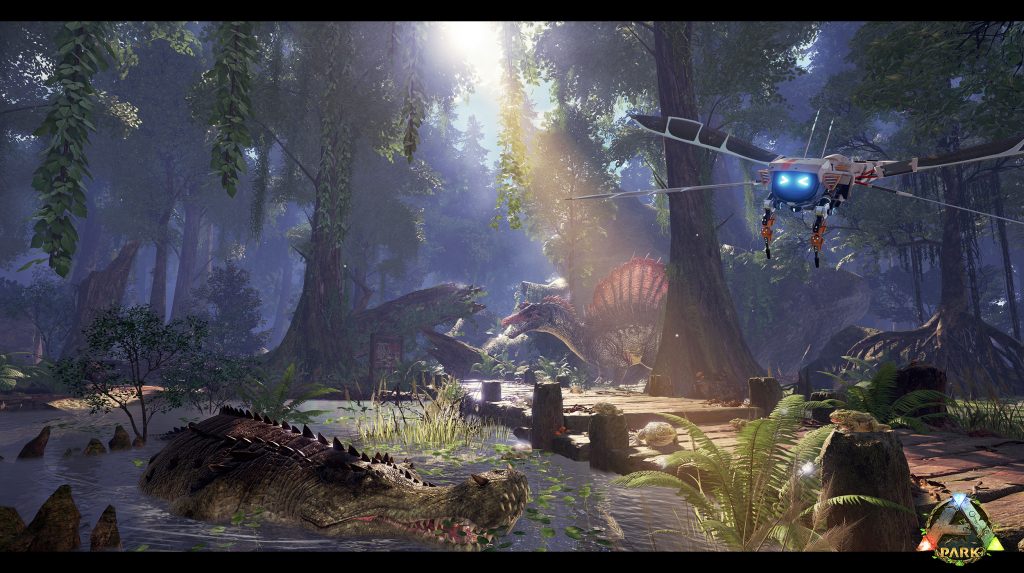 Speaking of which, the character customization is quite limited. You have two options for gender and age, and about six for hair, shirt, and boots. It is also odd you do not have the ability to enter your own name for your character, you have to use the random option which then feels like it only cycles through about 15 names or so.

The game boasts to have over 50 unique species to tame, fend off, and interact with, but in my time I have encountered about half of that. Of that half, I have only been able to raise triceratops as pets to feed; everything else was just something to scan or shoot. The eggs received as mission rewards are of the dinosaurs similar to those I already had. The T-Rex egg I have is locked through a pay wall that is not even an option in the online store. Even then, you only have four slots to keep pets. You would think that having so many species, you would want to give players the option to tame each of them or have more than just one way to interact with said creatures. 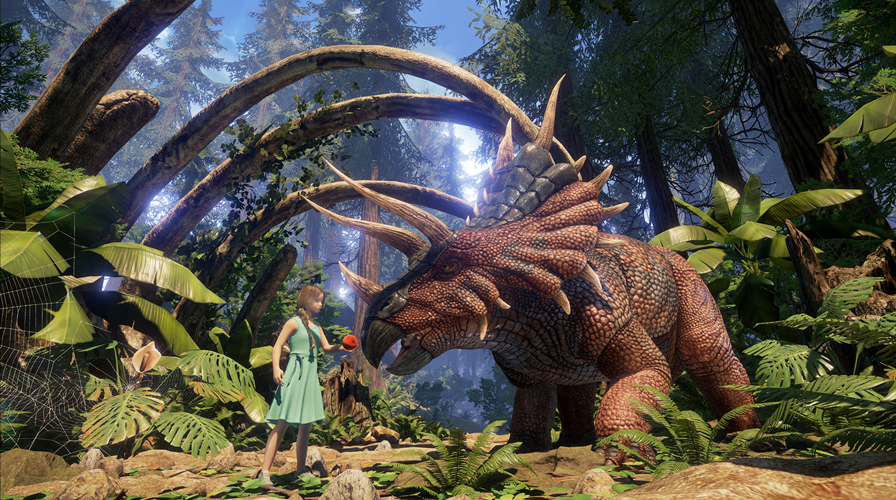 The controls and gameplay are both annoying and easy to use. You move by teleportation around the ground with the left stick and change where you are looking with the right. Oddly, when you look with the VR headset, it does not lock with your character when you move, creating unease when you look, but your entire character moves. In-game menus are not easy to work with either. Each of the controller’s face buttons (excluding X) are a menu and will overlap each other if you do not exit it before pressing another button. The inventory system is a joke as well. Instead of letting you grab all, some, or one of the items, you have to take one of the items manually to your person’s inventory. You then have only a few options to pick from when you are not at your item stash. As nice as it is that you do not have to worry about dealing with it outside of the crafting interface, it is still a pain. Another complaint is that every time you go to a loading screen, you need to readjust your VR headset’s display. That means if you are looking up when entering a new area, your character’s neutral position when loaded in requires you to be looking up to stay looking forward until you reset it. 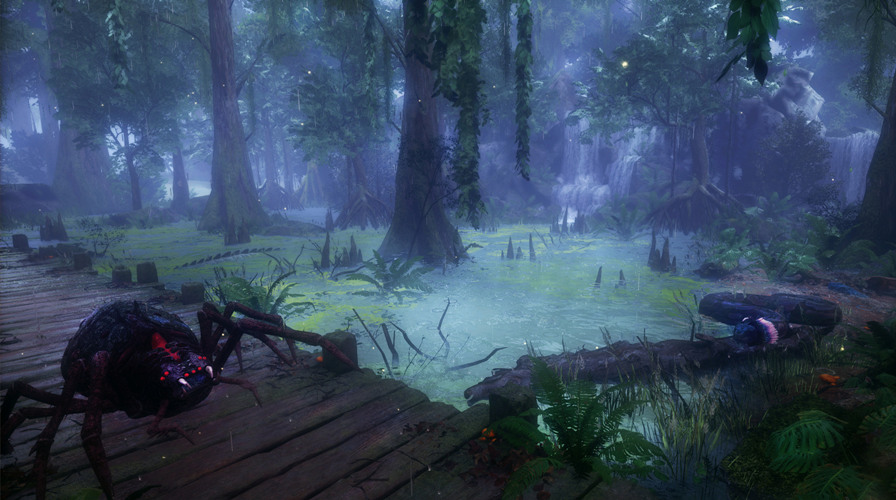 All things considered, ARK Park is a decent attempt at a virtual reality spin-off from a popular title. If things that are a pain are fixed and there are actual things to do, this could be a really good game to try out. It’s too bad that you are being charged $40/$50 for something so lacking.

ARK Park does what it sets out to do with a VR experience that complements ARK: Survival Evolved's world. It is just too bad that there is a lack things that you can do and interact with before getting bored. Hopefully, the updates Snail has planned will change that.