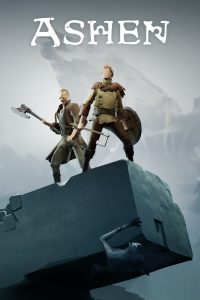 A44, a development studio in New Zealand, breaks into the scene with their debut title Ashen, a challenging, third-person action-RPG with stamina-based combat. If that description sounds familiar, it’s because Ashen blatantly copies its core combat from Dark Souls. It’s a tried-and-true formula, one that has spawned numerous imitators over the years, but this also means that the bar is set high; the combat needs to feel just as good lest it come off as a cheap imitation, and A44 has to find another way to distinguish themselves apart from the series that so clearly inspires them. That’s a tall order for any studio, to say nothing of a company shipping their first game. Do they succeed? 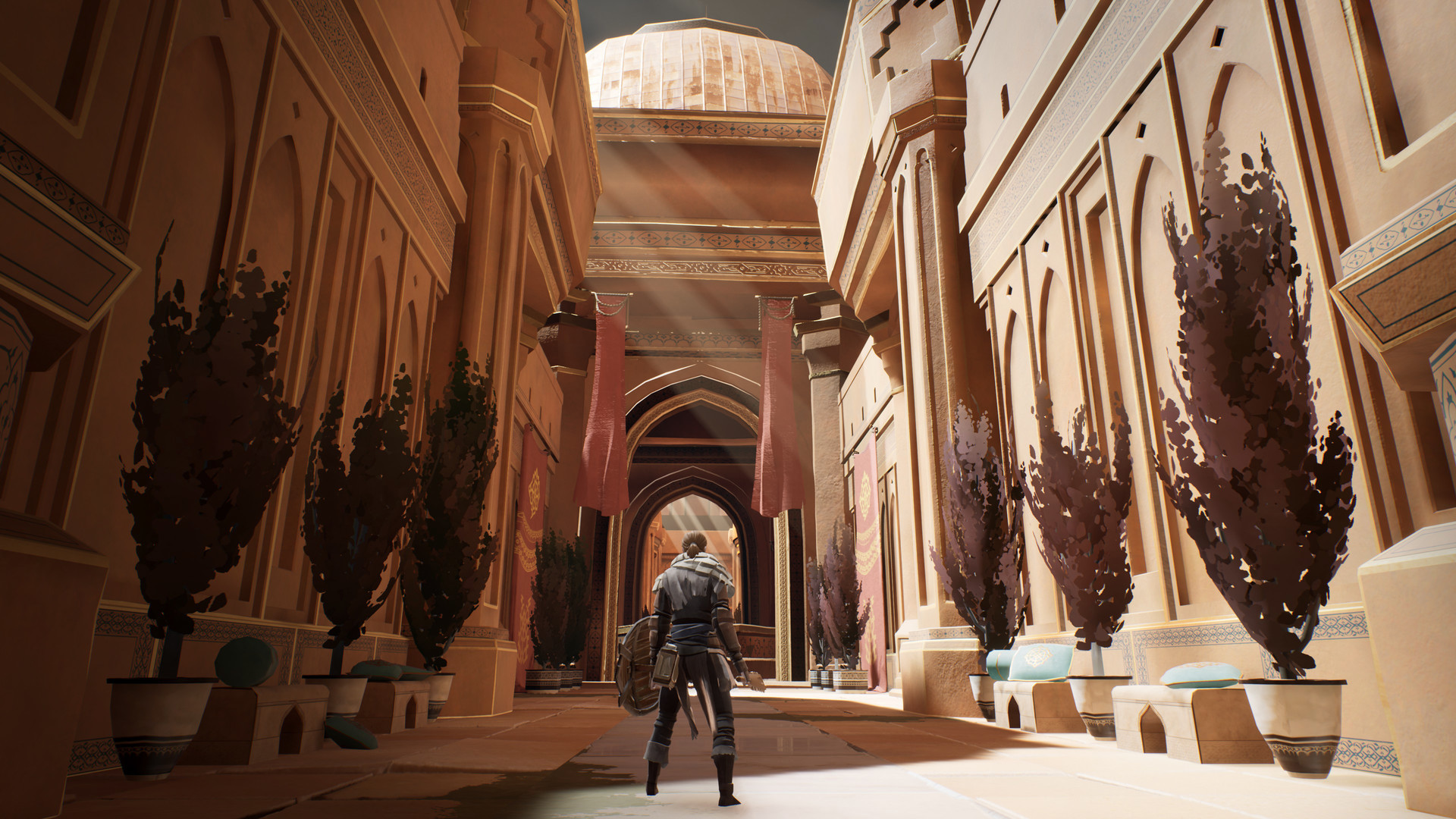 Violence: During the game you fight monsters and other people with a variety of clubs, hatchets, battle axes, and spears. Blood splatter appears when characters take damage. Enemies fall to the ground when they die, and their corpses disappear after a few seconds. You drown if you spend more than a few seconds in deep water.

Drug/Tobacco Use: One of the key side characters can be seen smoking a pipe. 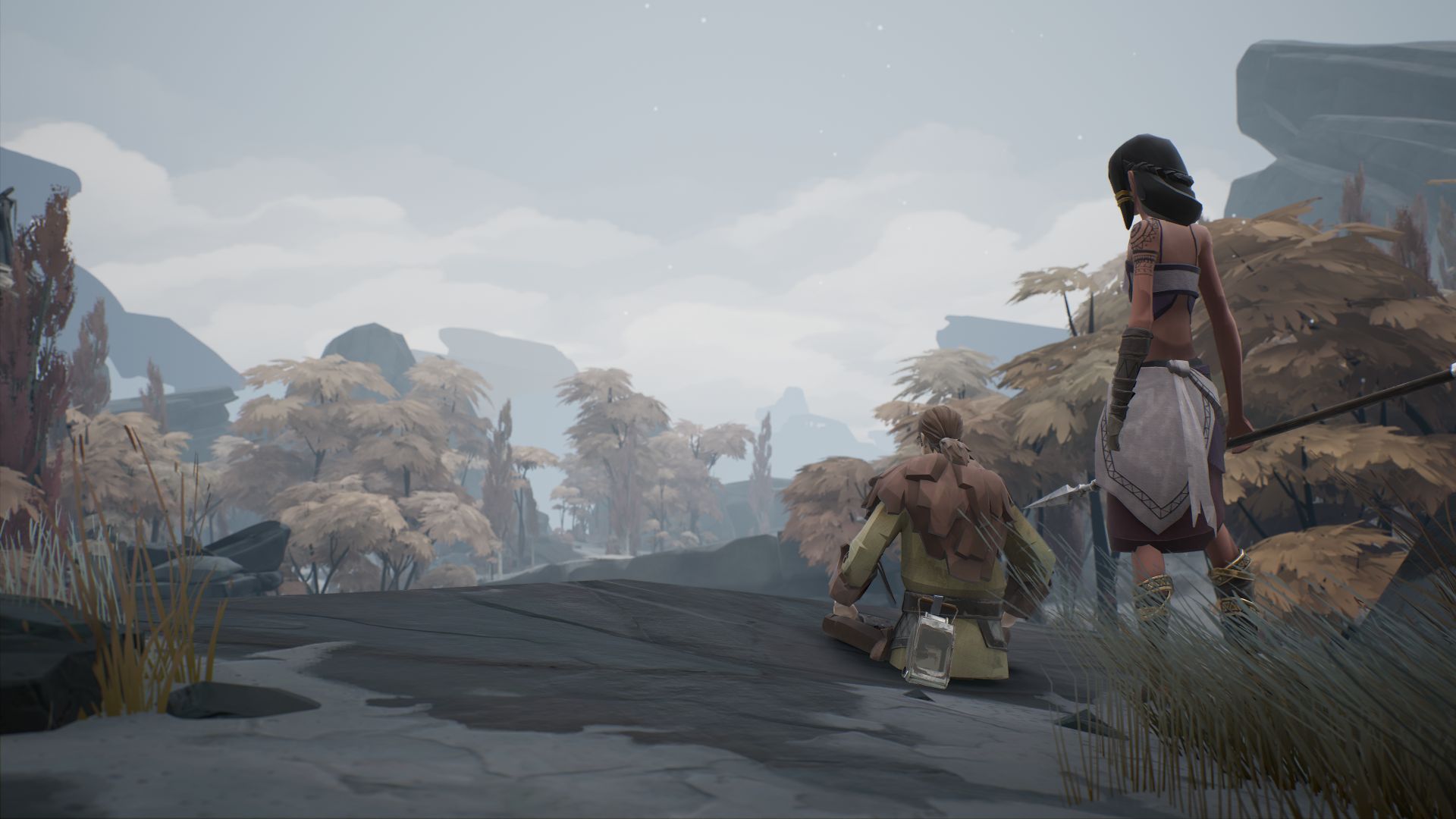 The story of Ashen takes place in a fantasy world that has been bathed in darkness for ages. A great bird called The Ashen that had given light to this world died long ago, but its time of resurrection grows near, ushering in a new era of light. Forces of the dwindling darkness, however, conspire to prevent this rebirth from taking place. You play as a nameless adventurer tasked with ensuring that it does, traveling the land and uncovering the ancient relics needed for the awakening ritual.

At the start of your journey you clear out an area known as Vagrant’s Rest, which becomes your home base. As you progress in your journey, settlers start taking refuge here, constructing buildings and offering items for purchase. Seeing homes and shops forming around the rocks on the hillside and hearing villagers talk about how thankful they are to have a place to rest gives the game a hopeful tone. This is perhaps one of the biggest differences between Ashen and Dark Souls: Dark Souls drops you into a dreary world where everyone tries to delay an inevitable bleak fate; Ashen introduces you to a world that, while harsh and dangerous, is nonetheless beautiful and worth saving. 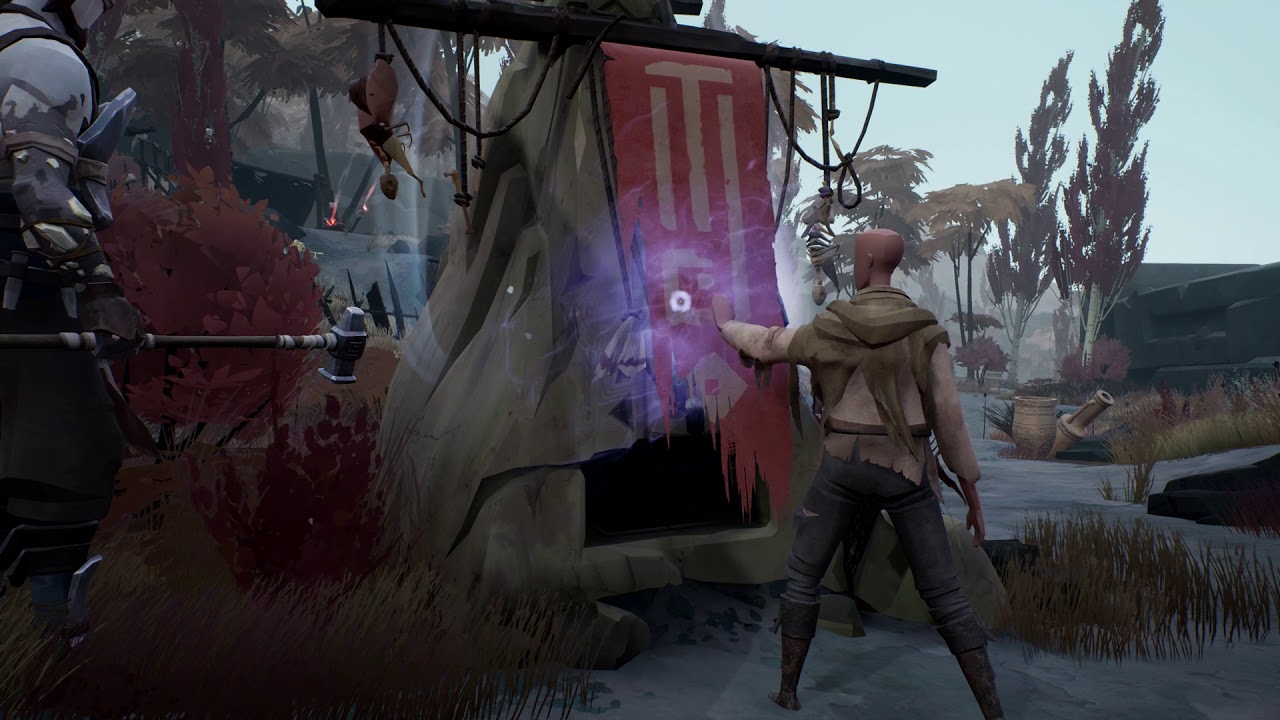 The game further establishes its hopeful outlook through the key side characters, who you meet throughout your travels and settle at Vagrant’s Rest. Each one has their own backstory and associated questline, with new steps becoming available as you travel further and further from your base. While the tragedies of their pasts haunt them and linger in their mind, they all nevertheless share the same positive outlook as the rest of the settlement, and are determined to tie up loose ends as they clear the way for a brighter future.

In terms of gameplay, Ashen makes no attempts to hide its admiration of the Dark Souls series, and that goes beyond the fact that both games are challenging. The similarities between the two are strikingly similar: a recharging stamina meter, a currency that drops to the ground when you die, a health flask that contains a set number of life-giving drinks—I could go on. Even some of Ashen’s consumable items function the exact same way as certain items in Dark Souls. To a degree, calling Ashen a Dark Souls clone wouldn’t be out of line. 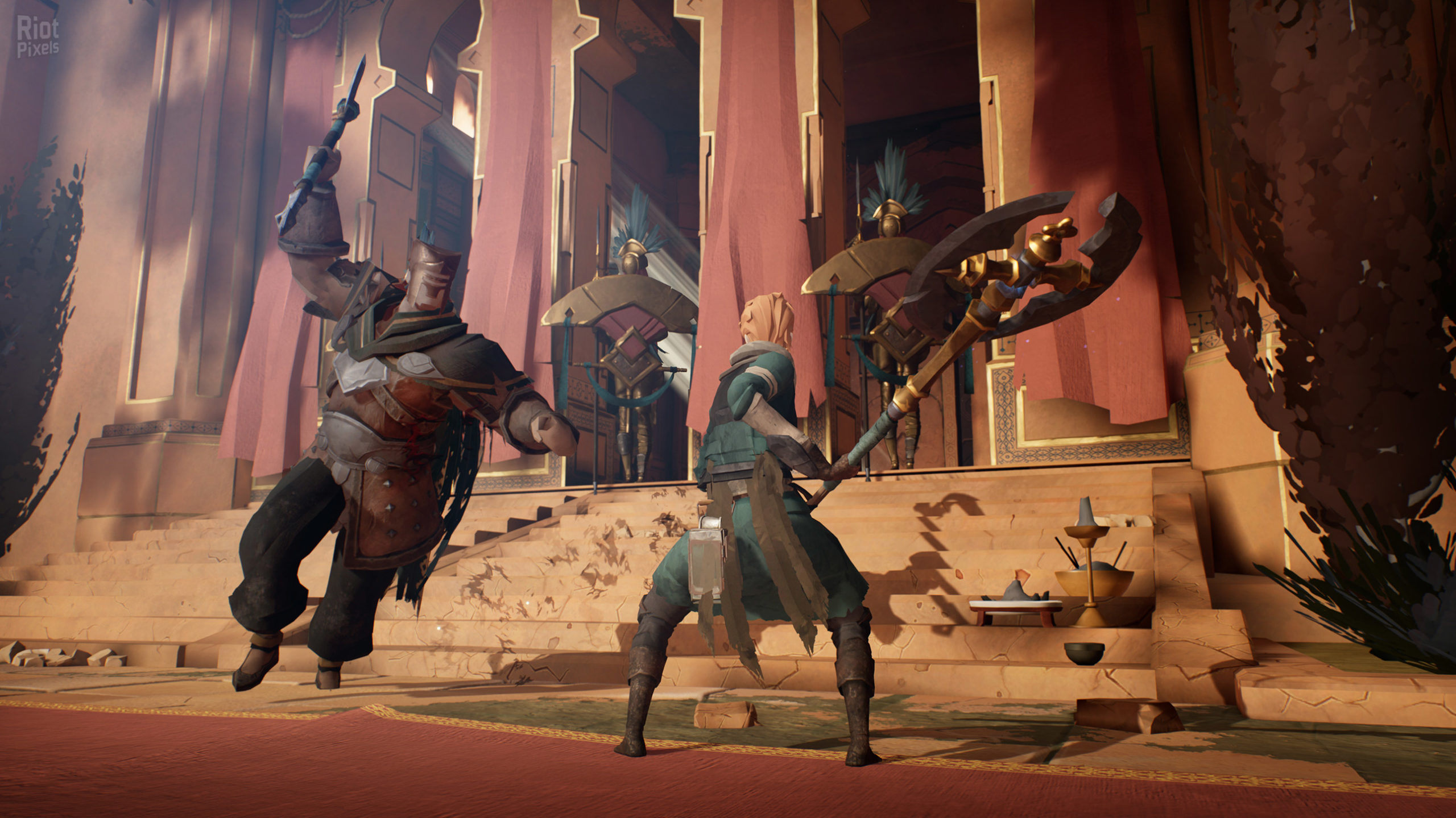 But only to a degree. Ashen mixes up the standard formula with a twist on multiplayer, which ultimately takes its cues from Journey. As you travel, you can encounter another player going through the world as well; this player looks like one of the key NPCs who you have found up to that point and who have agreed to make Vagrant’s Rest their home. The mission you currently have selected determines which character this other person looks like, adding a nice bit of narrative continuity, as the game makes it feel like you are completing the quest alongside the associated quest giver.

Some areas—including critical, story-relevant dungeons—can only be accessed with a partner. Thankfully, you have the option to turn on an AI-controlled companion, so that you can go anywhere at any time. This became important for me as I reached the end of the game, when encountering another human player became less frequent. If the game connects you with another human while the AI companion is enabled, the AI is replaced by the human. There is no on-screen marker to determine whether or not your companion is a real person, but you can easily tell by their behavior; the AI follows you wherever you go, never straying far. Friends can play with each other by finding the “Filter Code” in the menu and setting up the same code number in each game. 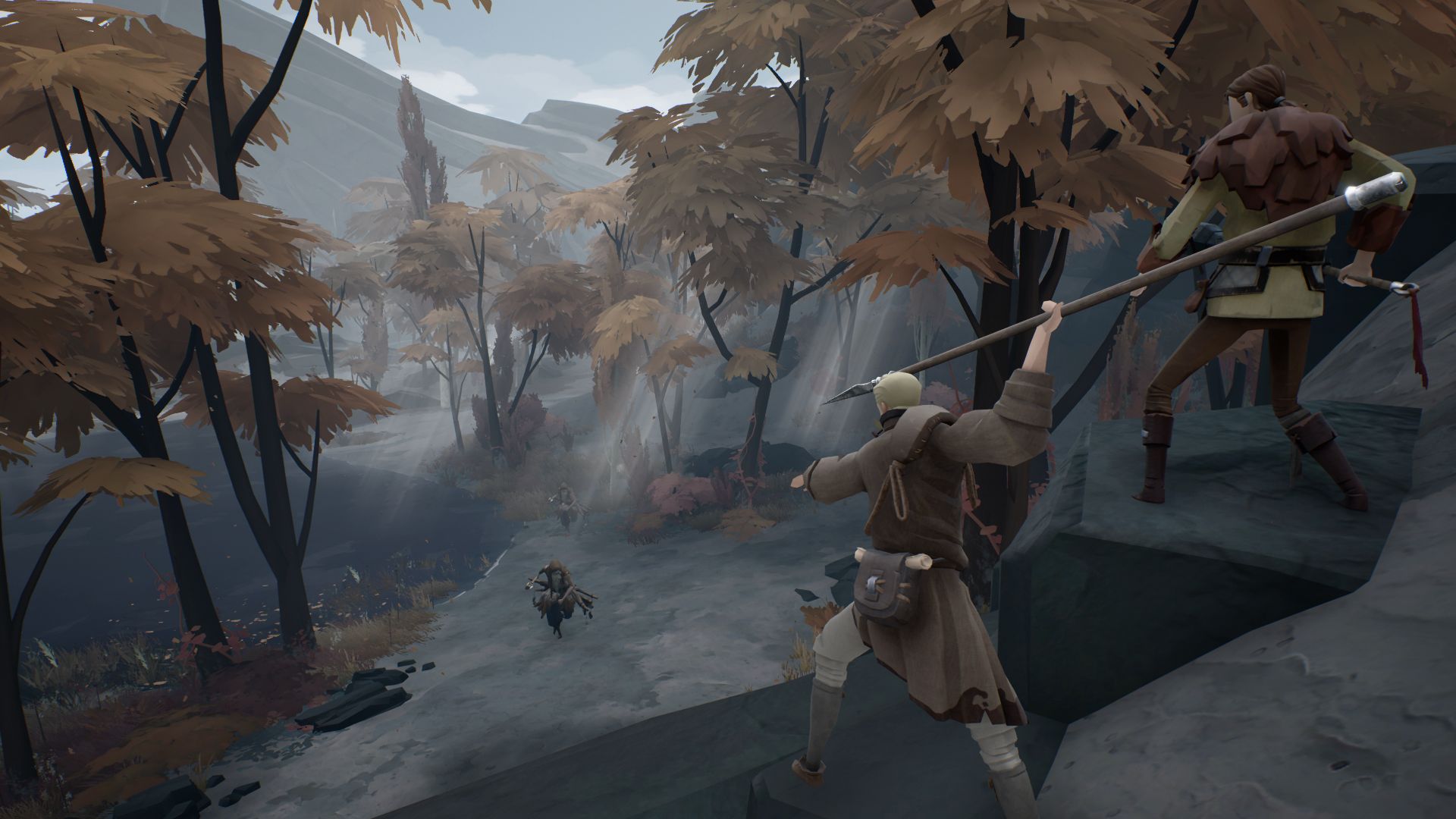 While the multiplayer is well-implemented for the most part, a couple of my issues with Ashen stem from this feature. The game severely limits your ability to communicate with other players; you can press a button to call the other person to follow you, and you can hold it down to point in a direction in which you’d like to go, and that’s it. This limitation helps maintain an air of mystery in your interactions, but also keeps them shallow—there were times when I would have appreciated a few other simple emotes, such as the ability to thank the other person for helping me fight off a tough boss, or the option to wave goodbye when I was about to go my own way.

More significant is the importance of your companion when tackling dungeons and bosses. As mentioned above, certain areas can only be accessed with a companion, and that’s because these places are designed with cooperative play in mind; trying to complete them solo would be an exceedingly difficult task in an already challenging game. If your companion dies while inside, however, that is exactly the situation you face. You and your buddy can revive one another the first time each of you run out of health, but only the first time; after that, an empty health bar means death. During my playthrough, I encountered a series of misfortunate and frustrating dungeon runs in which my companion died early—including one time when he waltzed into an abyss—leaving me with essentially two options: forge ahead to face my inevitable doom and drop my Souls Scoria, or consume a Homeward Bone Craven Remnant to warp out—an item that can only be obtained off the corpses of certain enemies whenever the game feels like giving them to you. Either way, I knew I had to repeat the dungeon ad nauseum and hope that I would get a more competent companion in the next attempt. 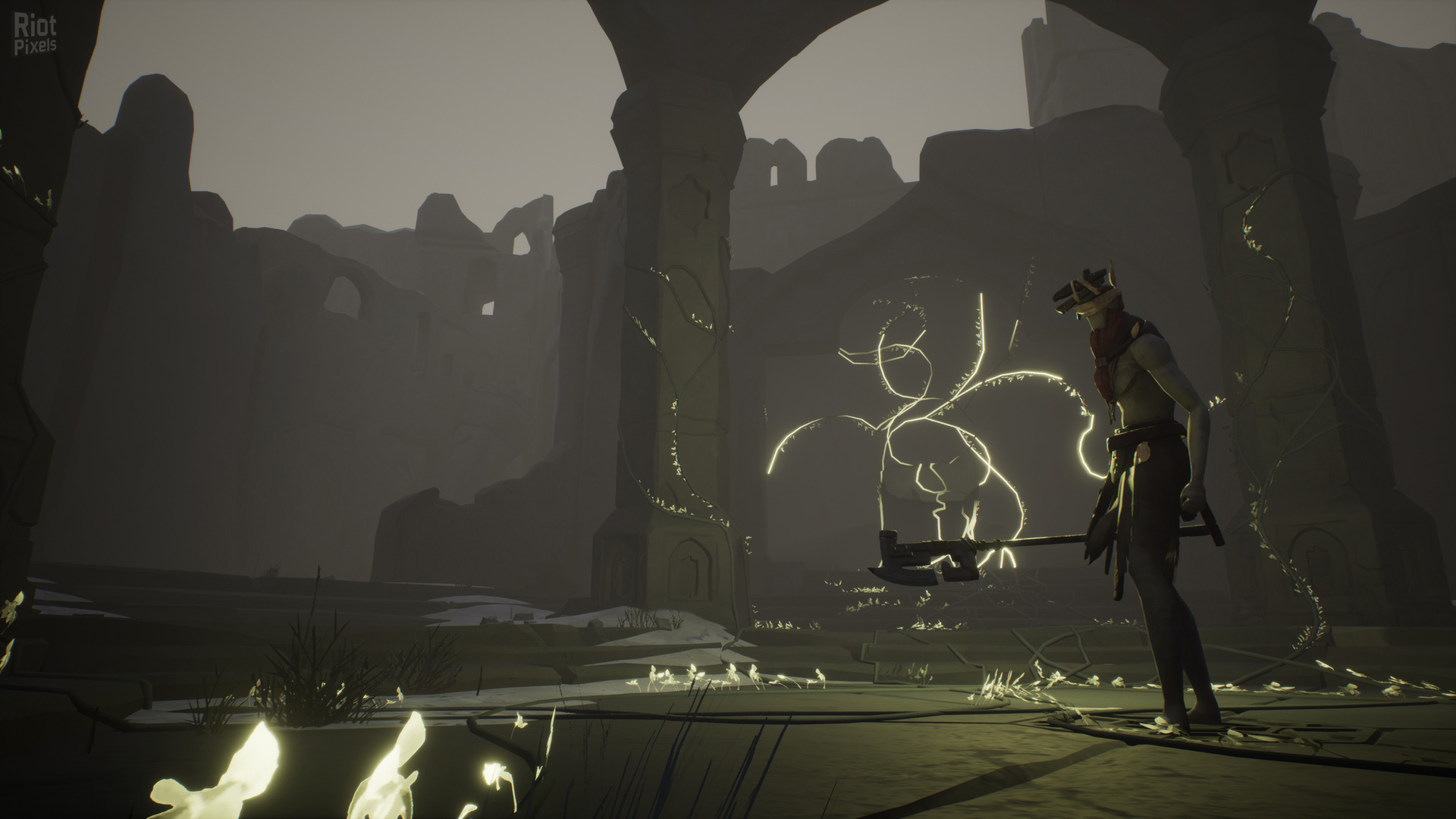 Ashen doesn’t have character classes like most other RPGs; your weapon loadouts consist of a one-handed melee weapon/shield combo, a two-handed heavy melee weapon, and spears that can be thrust or thrown. You find upgradeable weapons that fit into these categories during your adventure, each with slightly varying stats. As such, the game isn’t flexible for multiple playstyles. Thankfully, the melee combat, which serves as your bread and butter, is well polished and feels great. Alongside the weapon loadout is the Relic and Talisman loadout; these items—which unlock at certain points in the game and can be swapped out at your base—provide a variety of interesting buffs to your character, such as reducing the stamina cost of attacks, applying a health bonus the further you travel from Vagrant’s Rest, and increasing the amount of Scoria you receive from fallen enemies, just to name a few. It’s a neat system, but it is held back by the fact that you have to pay every time you swap them into your loadout. This discourages experimentation and discovering the best setup. 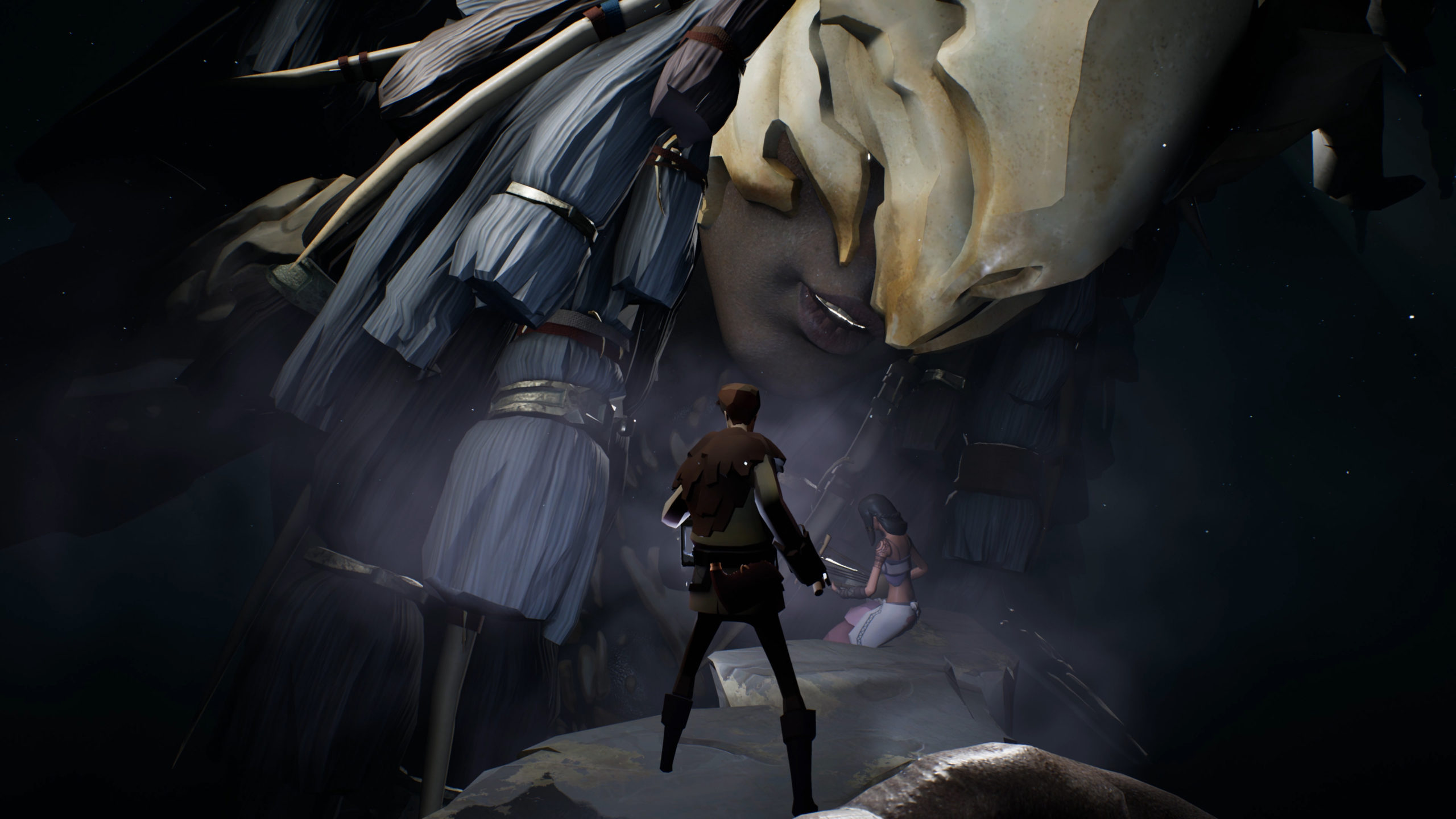 Visually, Ashen is gorgeous. While it at first seems to overuse various shades of gray (no pun intended), you soon discover splashes of color dotting the landscape, and the overall color palette diversifies as you advance through the game. Character design stands out as well; while all the characters lack facial features like eyes, a nose, or a mouth, their other design elements—facial hair, outfit, accessories, etc.—give each one a distinct appearance. This, combined with strong dialogue and voice acting, makes each character feel unique and lifelike.

Lighting plays an important part in Ashen, not only thematically and in setting the mood of an area, but also in gameplay, adding an additional layer of tension and strategy. Some areas are so dark that you cannot see without a lantern, which affects your weapon choice. Most of the time you can swap between your weapon loadouts with no consequence; to use a lantern, however, you are forced to hold it in one hand while you grasp your one-handed weapon in the other. Placing the lantern down on the ground lets you illuminate a small area around you while still swapping your weapons. 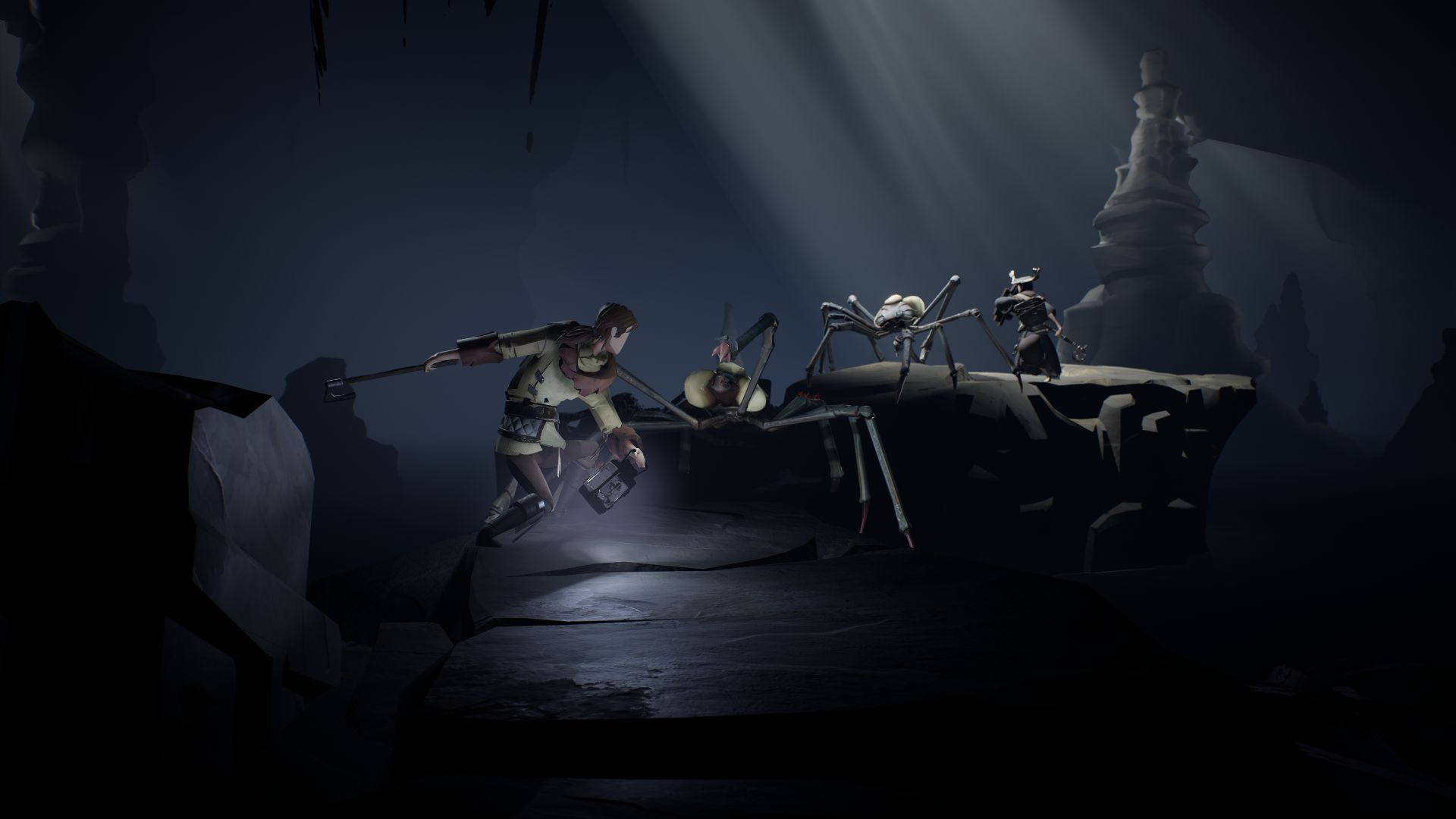 Ashen is undeniably a tough game, but its strong gameplay, hopeful story, and fresh—if imperfect—approach to cooperative multiplayer make the experience worth the effort. It manages to copy some of the best aspects of Dark Souls while introducing enough other elements to create a unique identity for itself. Anyone who enjoys this type of action-RPG, or is otherwise looking for a fun and challenging experience, should give Ashen a shot.

Ashen copies some of the best aspects of Dark Souls' gameplay, and takes an interesting—if imperfect—approach to cooperative multiplayer. If you're up for a challenge, this game is a treat.