I have been a fan of the Assassin’s Creed franchise from the beginning. However, after Assassin’s Creed IV: Black Flag, the modern-day story went in an awkward and needlessly convoluted direction. I lost interest soon afterward. I’ve played every major installment, but none of them after Black Flag have managed to keep my interest for long, so I haven’t finished them. As I started Assassin’s Creed: Valhalla, I decided it would be Ubisoft’s last chance to keep me as a fan of the series. 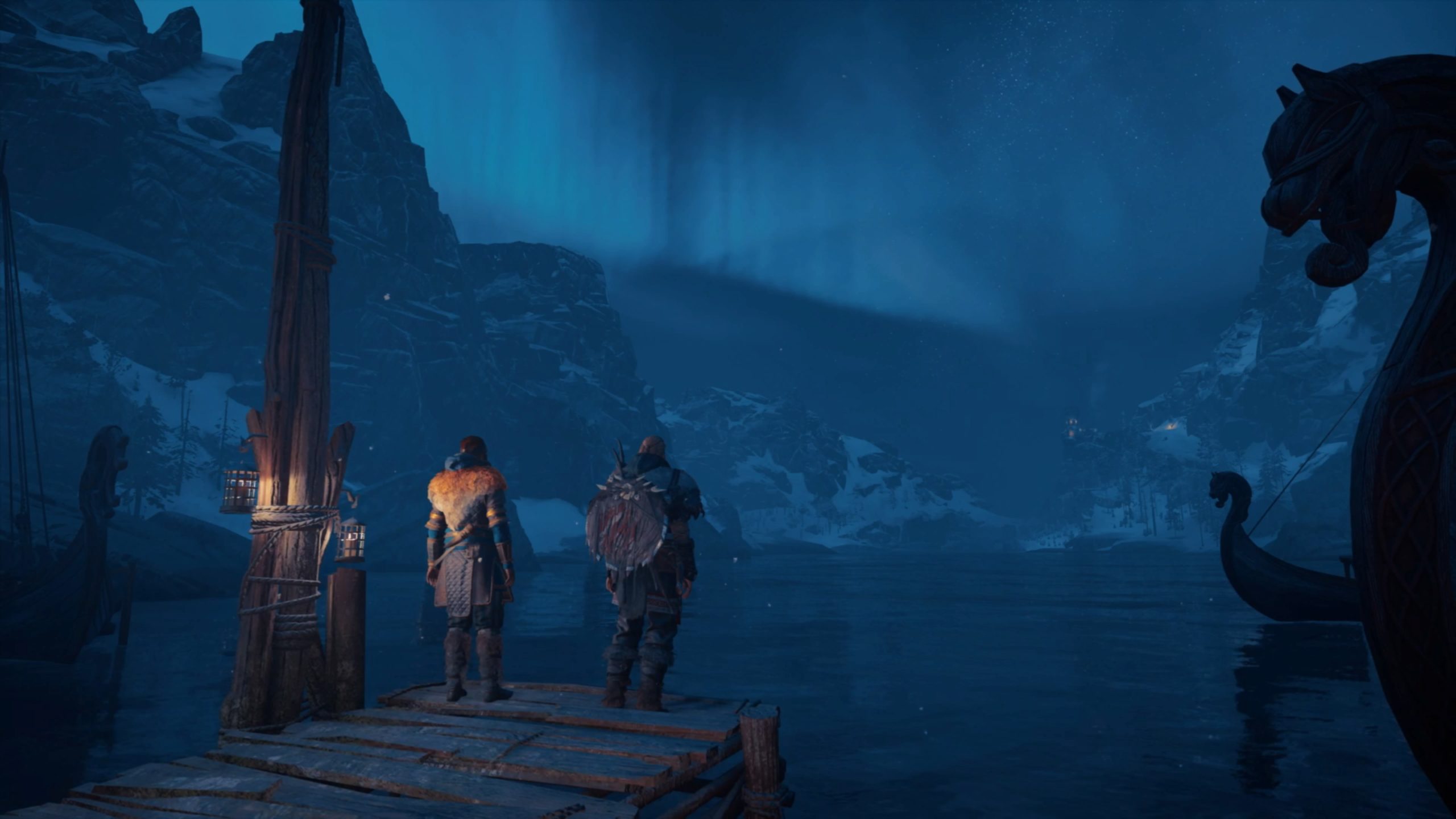 Where it all begins

Violence: Medieval warfare was gruesome. As such, this game portrays much blood and gore. A man is tortured. A character drops a bundle of heads to intimidate another into giving up information. During combat, blood splatters every which way, and enemies are decapitated and/or lose other limbs. However, the game gives you the option to turn off the blood and dismemberment, ultimately making the violence on par with a Teen-rated game. 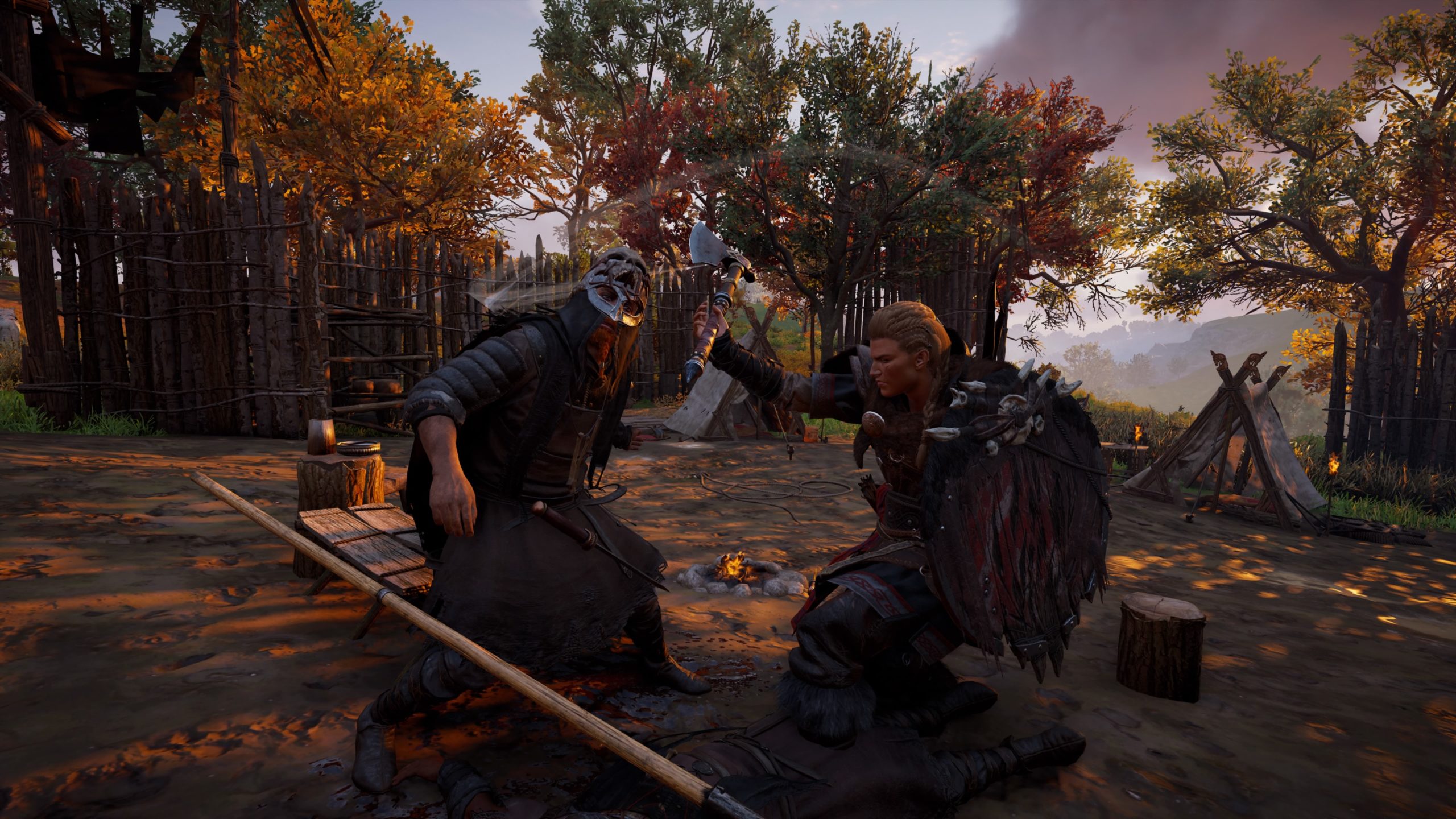 Sexual Content: Sexually suggestive jokes appear occasionally throughout the game. There is a side quest where a woman asks you to help rekindle her sex life with her husband by burning their house down so that it feels like they’re participating in a raid. Players can pursue romance with various characters, including same-sex relationships. Kissing is shown, but it doesn’t go past that, as it fades to black. A female boss has an exposed chest. It is possible to turn nudity off through an in-game filter in the settings. 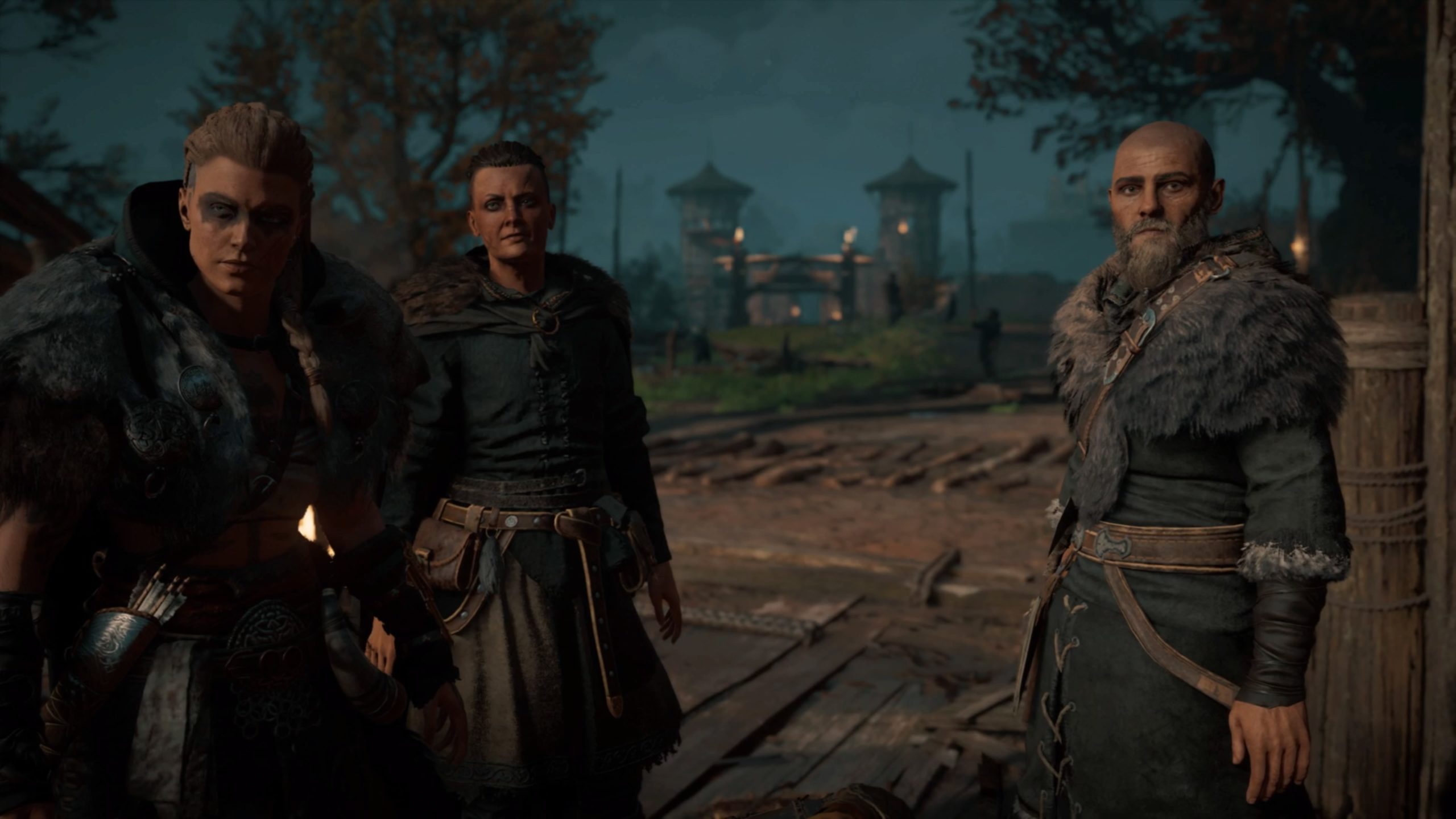 Their stares are just as deadly as their weapons

Spiritual Content: The game starts with a narration of the Norse creation myth. Because you play from the perspective of someone born in Viking Age Norway, the Norse religion is portrayed as being true, for that is how someone back then would have experienced it. As such, Eivor has visions of Odin, a seer chants and prays to the gods, and the seer performs “seidr,” a type of Norse magic used to foretell the future. Optional side content deals a lot with the mythology, which is sure to make fans of the stories—myself included—happy. There are cursed areas scattered throughout England, and to rid the area of the curse, you must find and destroy occult-like altars. When arriving in England, the characters in your longship mock Christian beliefs. 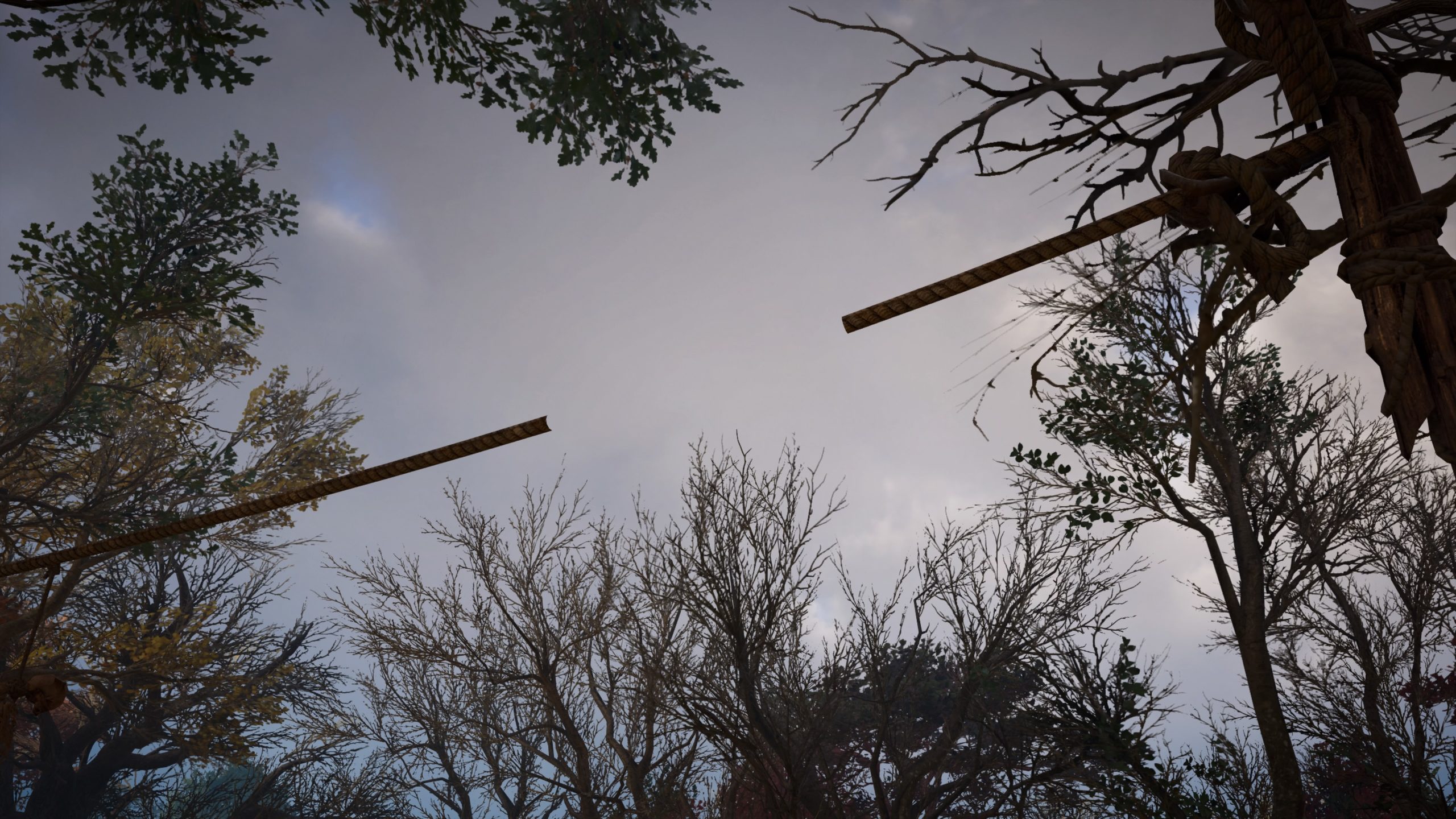 What sorcery holds this rope together?

Alcohol/Drugs: You can participate in drinking games and get drunk. The seer gives you concoctions as part of ritual magic to give you visions.

Positive Content: Some characters are willing to lay down their lives to save others.

“…and froze the blood of weaker men.”

In Assassin’s Creed: Valhalla, you play as a viking named Eivor. After some family drama following the arrival of a man named Harald, a king trying to unite every viking clan under his rule, you and your adoptive brother Sigurd leave Norway to pursue glory and riches in a land we know today as England. It is there that you spend a majority of the game. 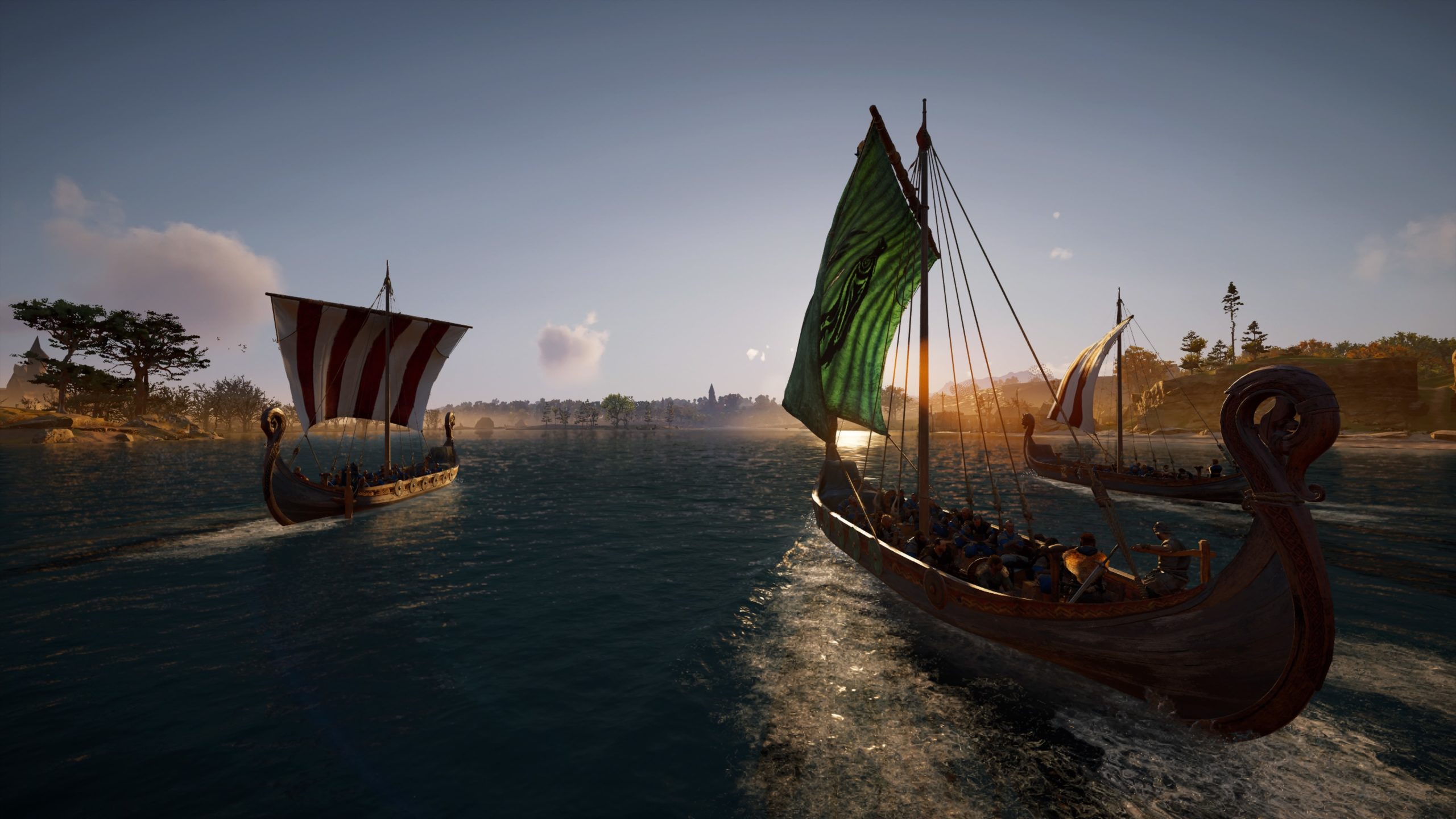 Let me get this out of the way early. I love the setting. Had Ubisoft placed this game at any time other than the Viking Age, I likely would have skipped it. The Viking Age fascinates me, and I own several books on the topics of Vikings and Norse mythology.

There are some cultural and historical deviations. Axes, probably the most iconic Viking weapon and one that features prominently in the game, were not used as often as swords. I have also not found any sources on female Jarls like Valhalla‘s Soma, as men typically ruled the politically patriarchal Viking society. Perhaps most significantly—and something that feels particularly weird to me—Evior and his crew are, in a sense, noble Vikings who own no slaves and kill no innocents.

Not even a Viking can resist a dog’s charms

All that said, I find these deviations acceptable. This is historical fiction, and while Ubisoft took some expected creative liberties with the mythology, they got a number of things right, namely the characters and personalities. Furthermore, Assassin’s Creed games have never let you kill innocents with no consequence, so Evior’s relative nobility stays in line with series’ norms. So while some of the modified elements and timelines disappointed me, I was happy that they made the effort to go beyond just paying lip service to commonly referenced Norse words like “Odin” and “Valhalla.” 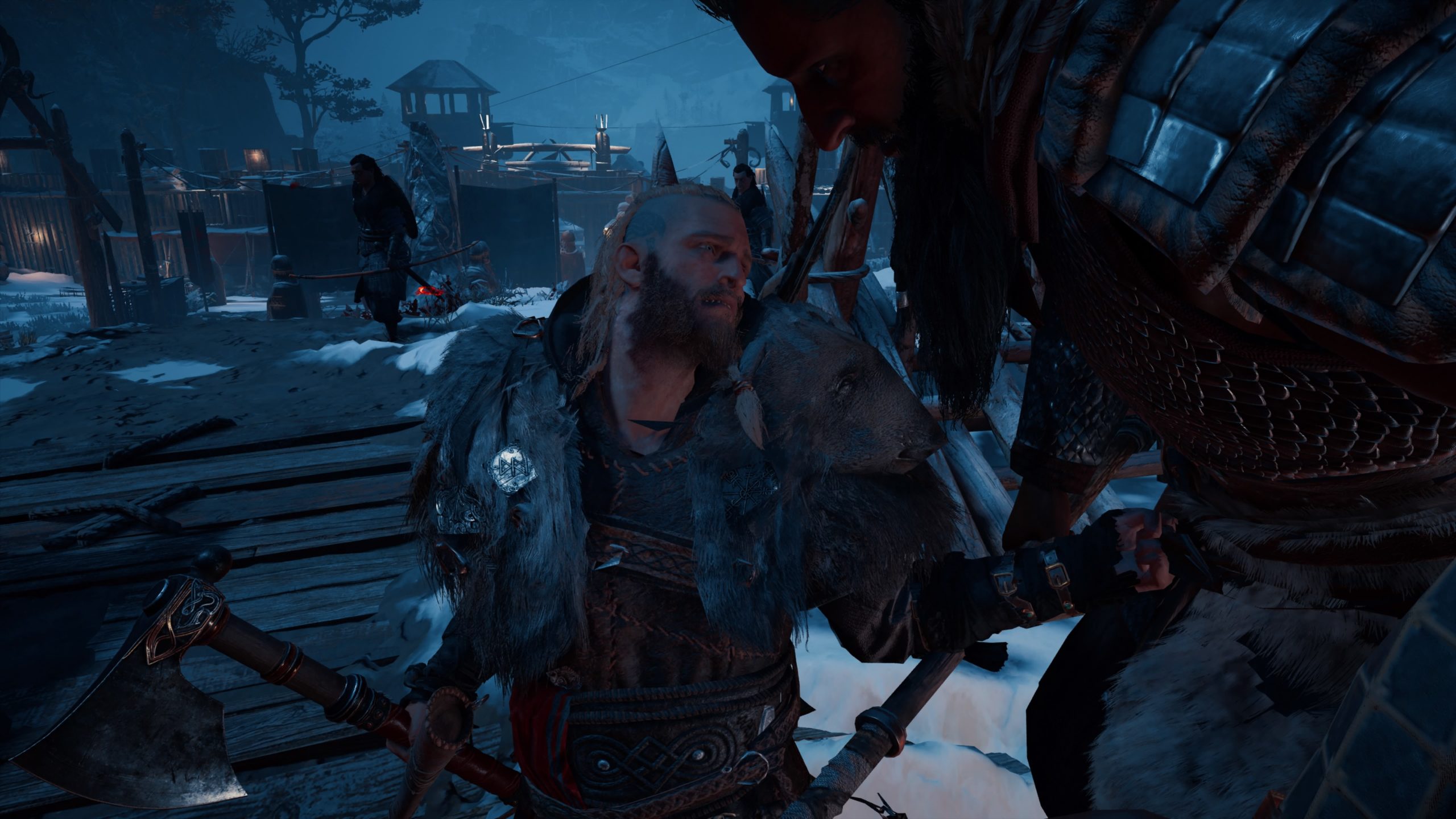 This hurts me worse than it hurts you

The combat system retains the same formula present since Assassin’s Creed: Origins; however, it is more refined than ever. You have light attacks, which are faster but weaker, and heavy attacks, which are slower but stronger. You also have a stamina bar that depletes as you attack and dodge. Landing damaging hits replenishes the stamina bar. There is a slight learning curve to master the parry, but once you’re used to it, it’s not difficult to take on a group of soldiers.

Enemies have a stun gauge. Attacking them fills it slowly, while parrying an attack fills it in large chunks. Once an enemy is stunned, you have the chance to do a “stun kill,” which is a quick cinematic finisher that changes depending on the enemy and weapon type, much like the Glory Kills from Doom. 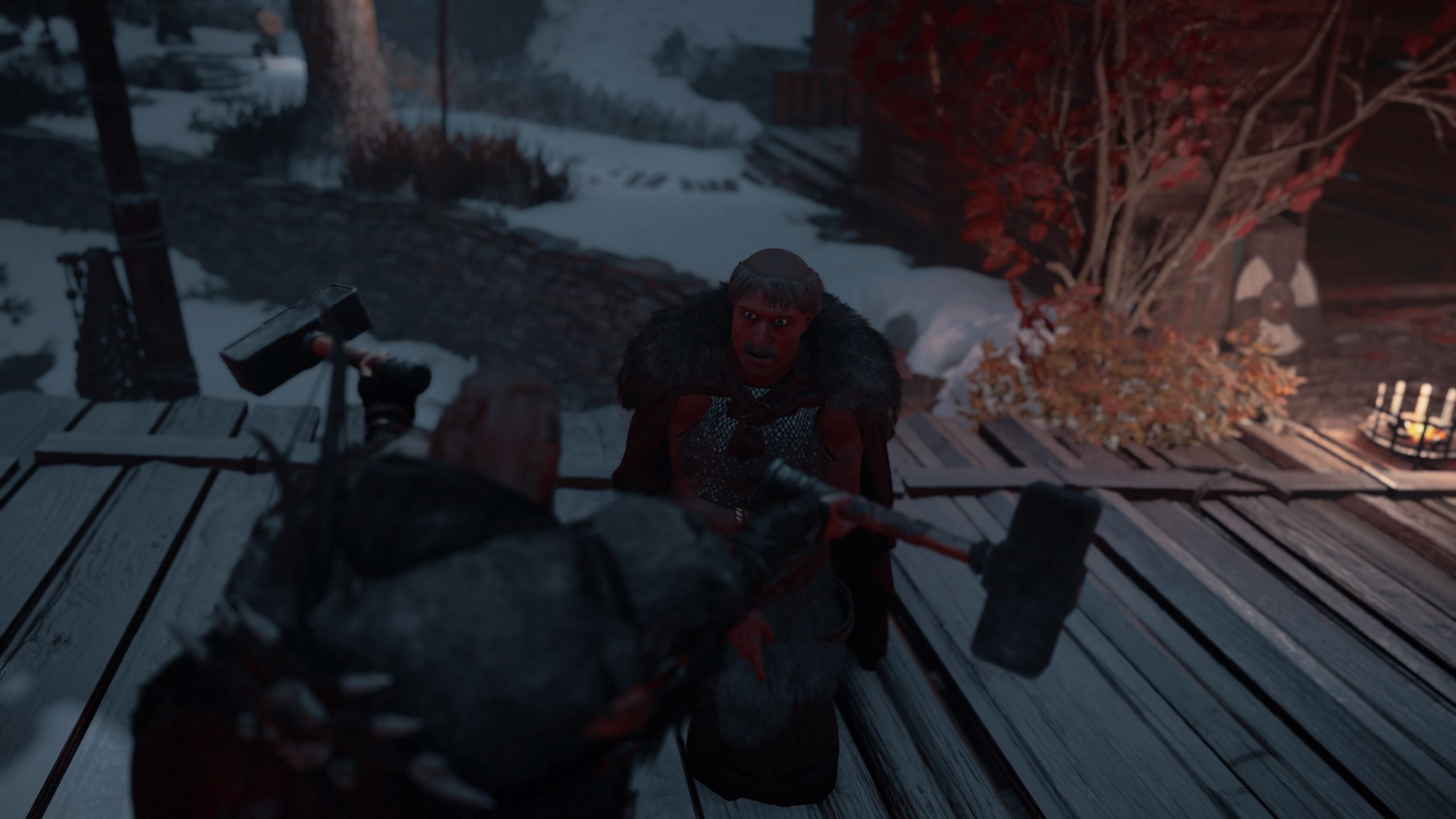 That moment when you realize you made a mistake

I found fighting to be a lot of fun. To make things even better, I could be an army of one. The combat in Assassin’s Creed: Unity was a major reason why I never finished it. Being forced to flee a group of three or more enemies went against the instincts I gained with Ezio and Connor’s fighting prowess. Thankfully, that is no longer a concern. I am able to be the Viking warrior the Saxons feared so much.

Too late to surrender, pal

Once you arrive in England, you are able to build up a settlement. There are plenty of buildings from which to choose, and the more you build, the higher rank your settlement achieves, and the more kinds of buildings you unlock. The best ones to start with are the stables and the Hidden Ones—what the Assassins were called before they got the name “Assassins”— bureau. Horses serve as the fastest way to get around the enormous landscape, and stables allow you to buy them. The Hidden Ones bureau unlocks the ability to perform the iconic leap of faith. You can still jump from high places into hay before unlocking it, it’s just a little more dangerous. 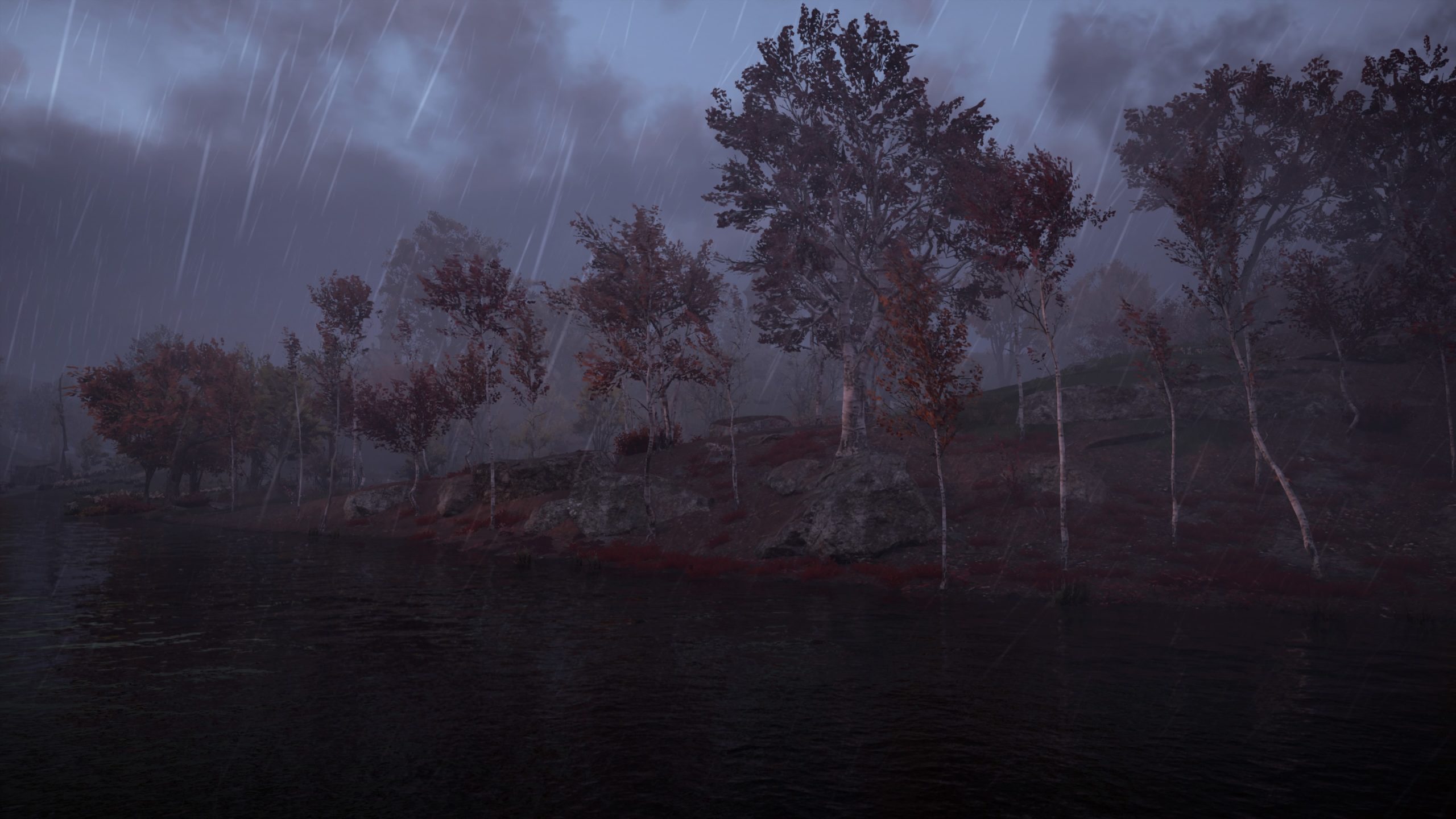 One of the primary gameplay elements may be an obstacle to some Christians. The only viable way to get materials to construct buildings in your settlement is to raid Christian monasteries. When raiding, you kill Saxon soldiers guarding the monastery, but you aren’t allowed to kill the monks. If you do kill them, the game threatens to desynchronize you, which equates to a game over. You also do not steal Christian artifacts, technically, as when you open large chests, you get wood and “materials,” which are the two items you need to build. That said, there’s no way around it, so if this violates your convictions, it would be best to avoid the game. 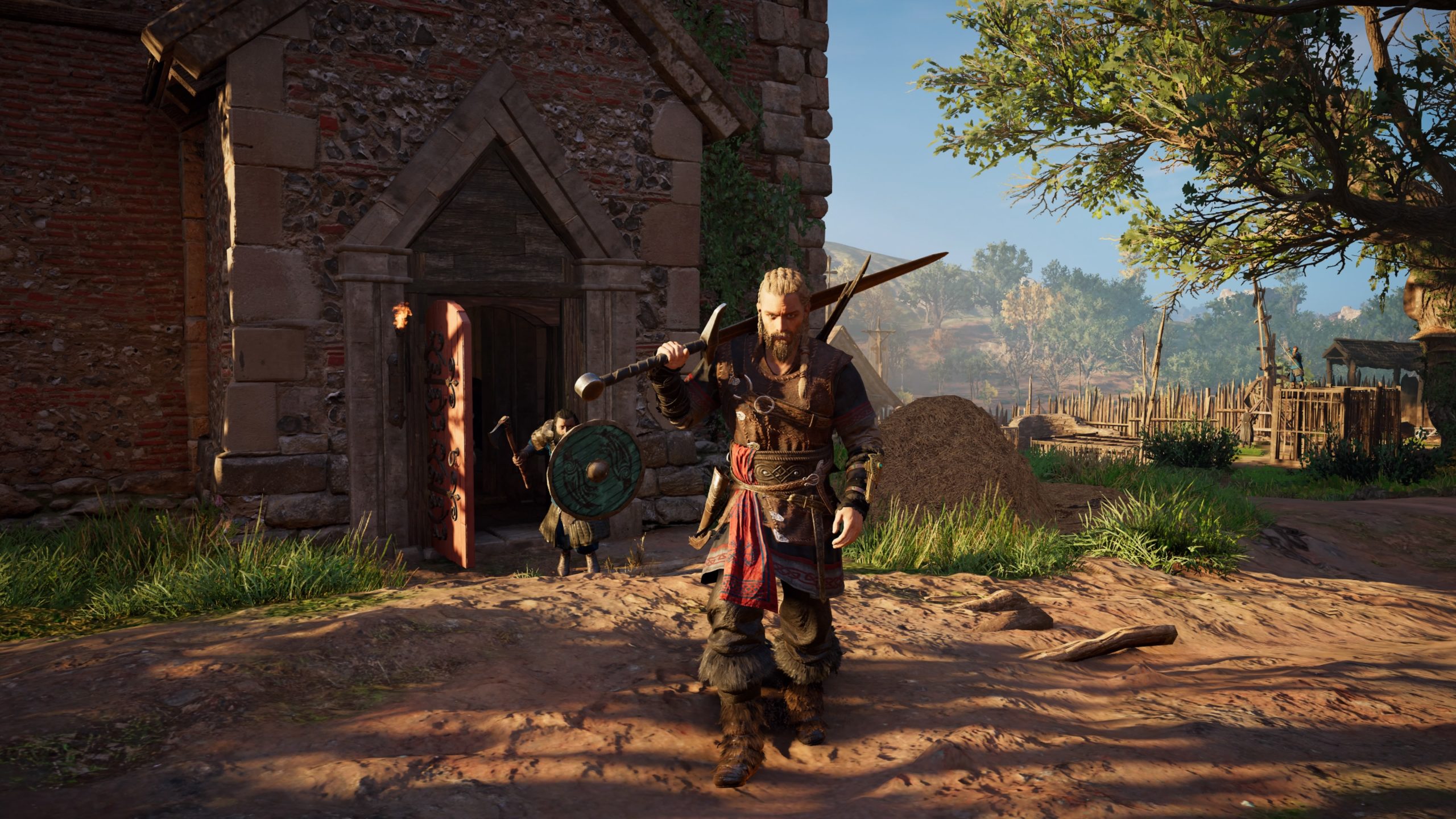 I’ve come to raid monasteries and drink mead. And I’m all out of mead.

Between raids, a Viking needs a pastime. Luckily, there are a few options. In addition to the classic hunting and fishing, Eivor can participate in drinking games. The first person to drink a certain number of horns of mead or ale wins. You have to press the button prompt at the right time in order to progress, and the more you drink, the harder it is to remain standing, so you need to correct yourself with the onscreen prompts. Afterward, the screen is wobbly for a short time as you wait for the alcohol to wear off.

Another activity is the battle of wits known as flyting. Flyting is the art of trading insults in poetic verse, matching the cadence and rhyme of your opponent. The game captures it brilliantly. You place a bet at the beginning, of either small, medium, or large. After your opponent says something, you are given four responses to choose from. If your opponent is impressed by the end of the duel, you win the bet. 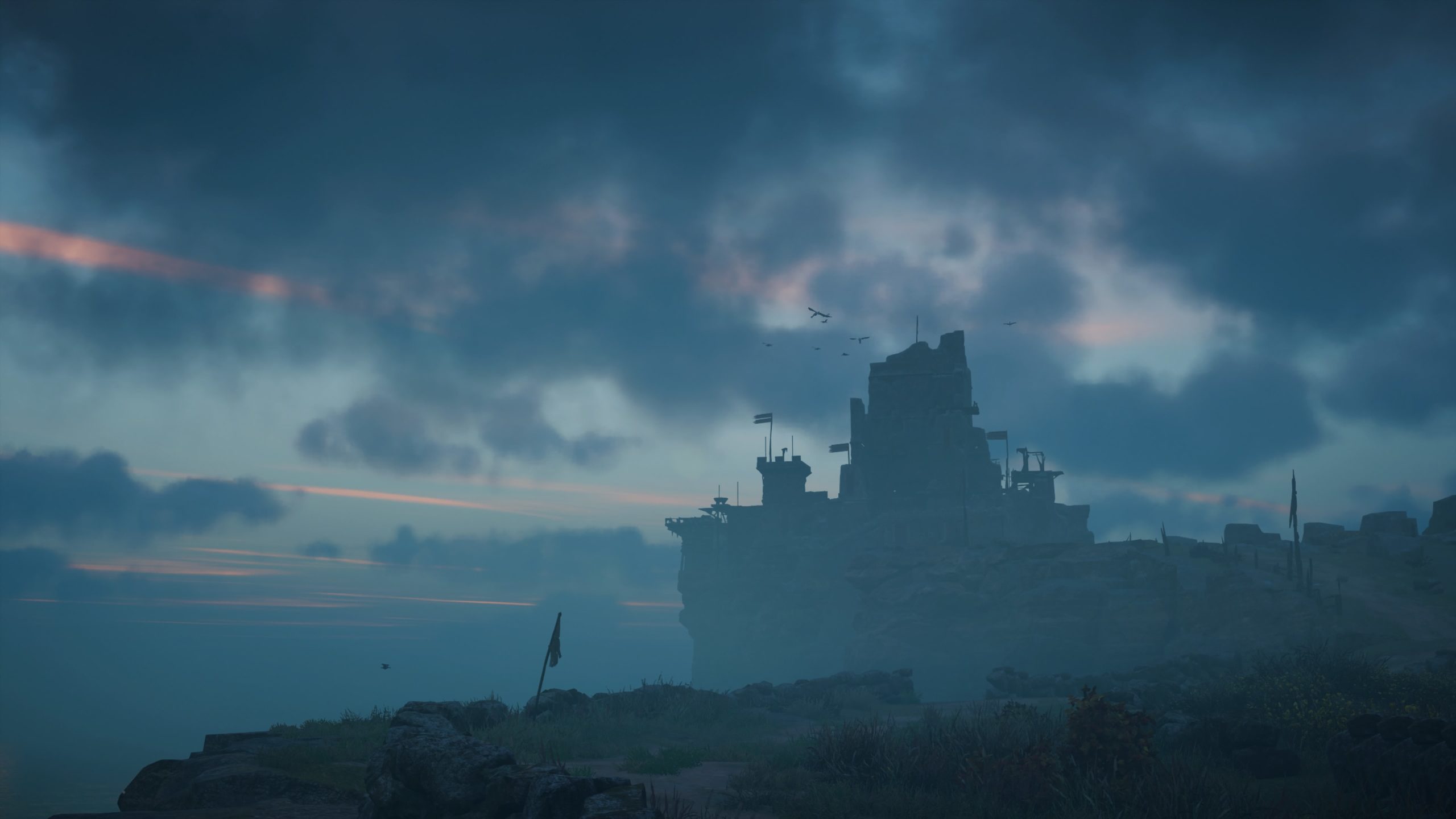 My time with this game has been terribly buggy. Some are amusing, others are infuriating. One amusing bug happened as I fought the first boss Kjotve on a second playthrough of the beginning. He killed me, then after the game reloaded, Kjotve tried to leave the battle arena, which prompted the NPC bystanders to shoot him with arrows. Before long, he was back in the middle of the arena, floating in the air, hanging onto nothing. He stayed that way, still getting shot by arrows, until I finished him. 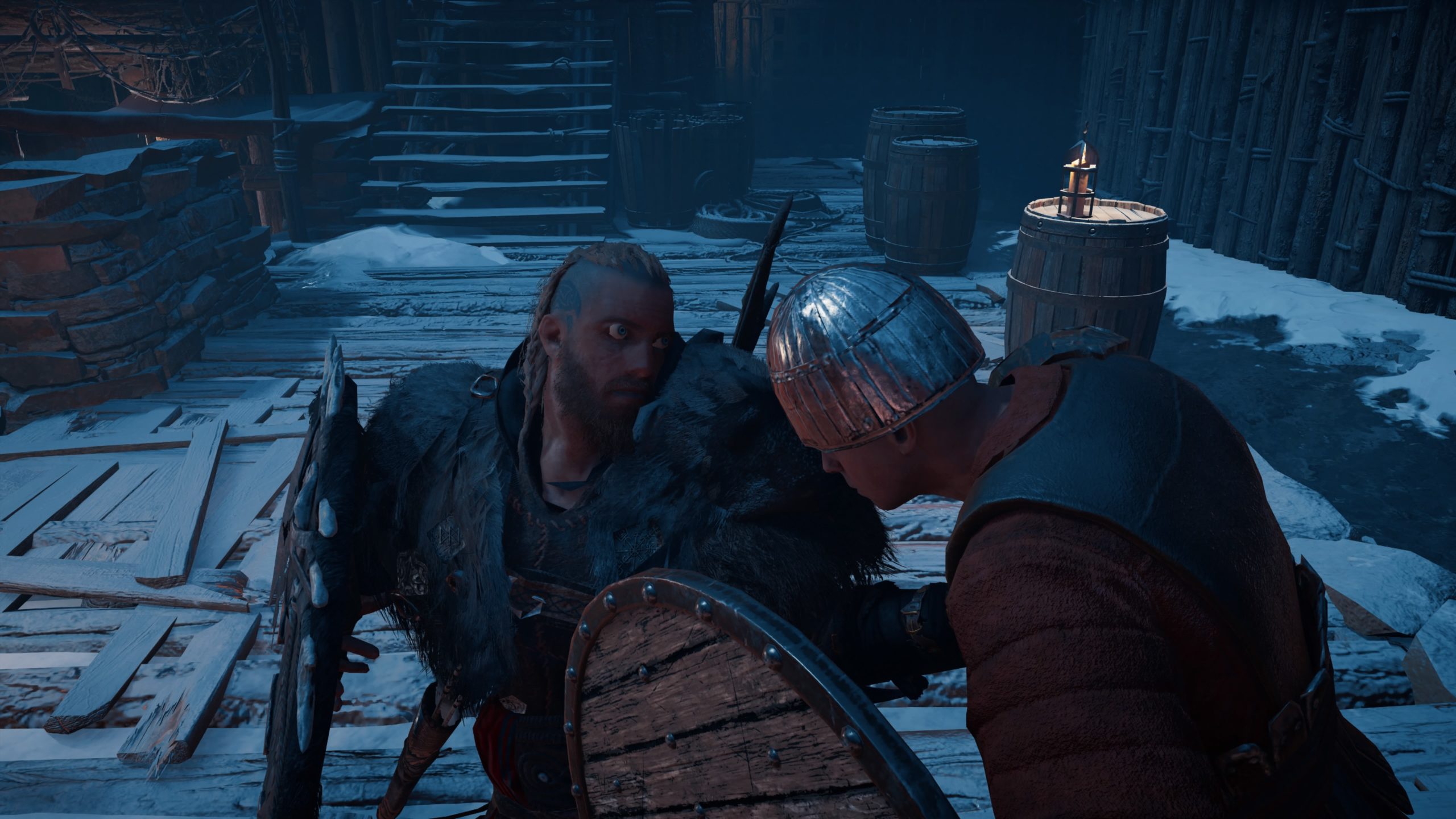 This was an eye-popping kill

The dialogue audio, meanwhile, frustrated me constantly. Oftentimes the audio will either pause mid-sentence, or not load at first, while the game continues. That results in characters talking at the same time, or responding before anything is said. It happens often. Hopefully future patches will fix the bugs. 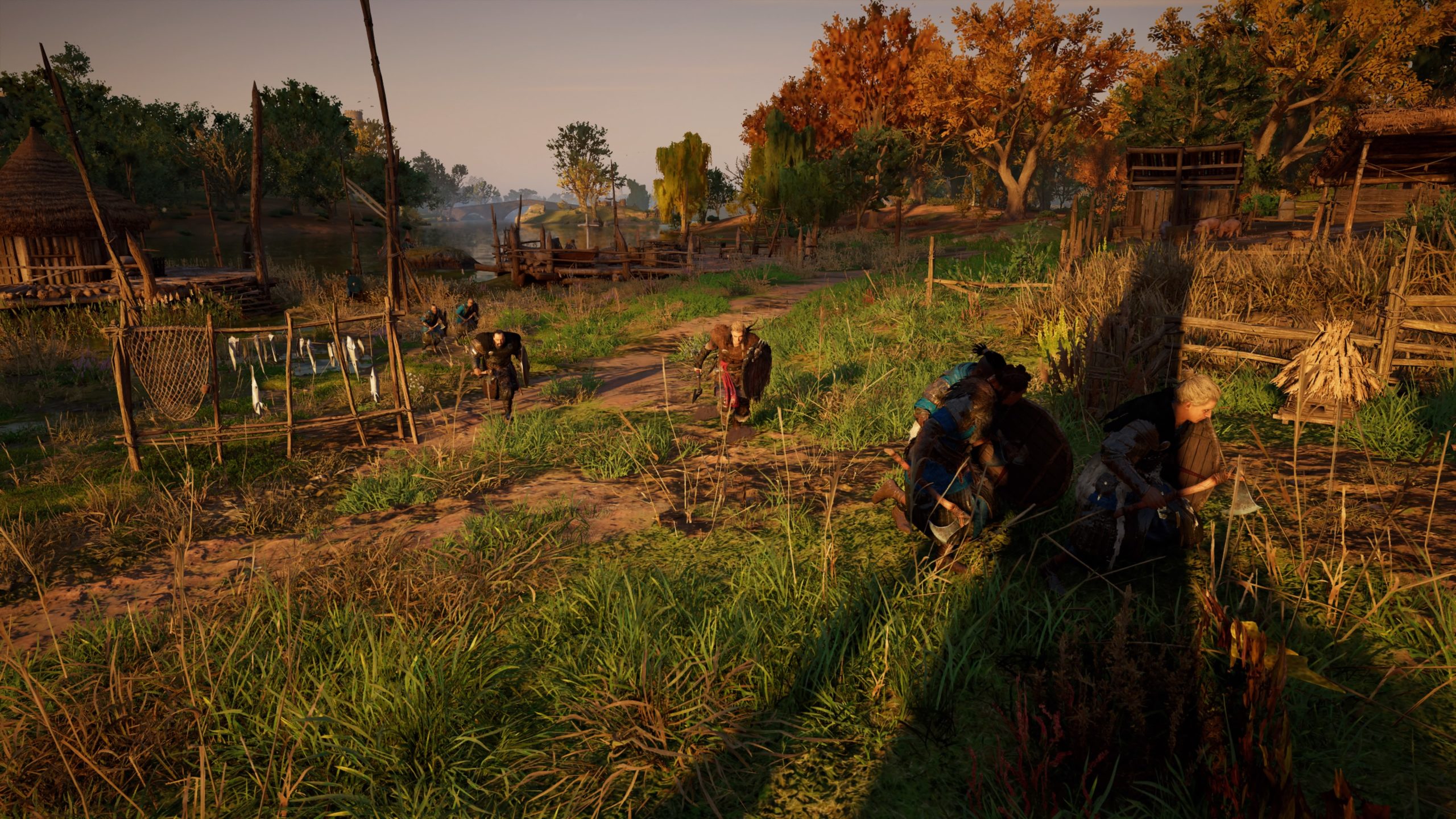 “From the fury of the Northmen, O Lord, deliver us”

The Assassins versus Templars story takes a back seat yet again. The Hidden Ones talk about their conflict, and they look very similar in outfit to the Assassins from the first game, but it’s still not the primary focus. It’s almost hard to believe that, narratively speaking, this game is even in the same franchise as the Altair and Ezio games.

My final complaint is with the modern-day story. At this point, I don’t know nor care what’s going on here. The obligatory time outside the animus is not enjoyable anymore, and I’d prefer to avoid it altogether. 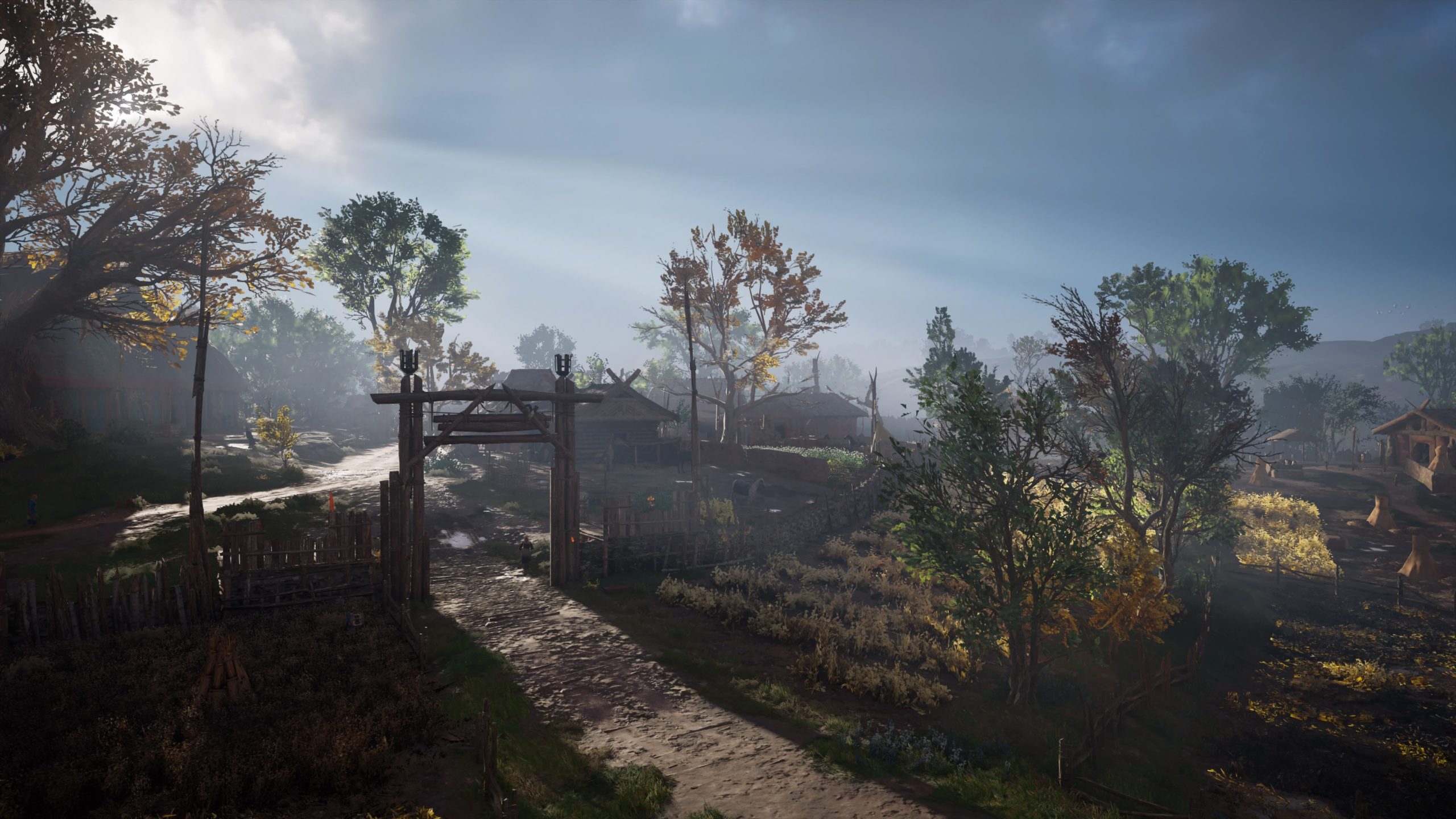 The sunrise is truly beautiful

Narrative aside, this is fundamentally another Assassin’s Creed game. While the gameplay is better than the past several games, it still feels like it belongs in the franchise. For anyone who has never been a fan, or who was a fan at one point and no longer is, there isn’t much of a reason outside the setting to come back to it. The setting alone is worth it for me, and I’ve greatly enjoyed it, bugs and all. I’ll forgive them for what they got wrong, because of how much more they got right. It looks like Ubisoft will retain me as a fan for a while longer. 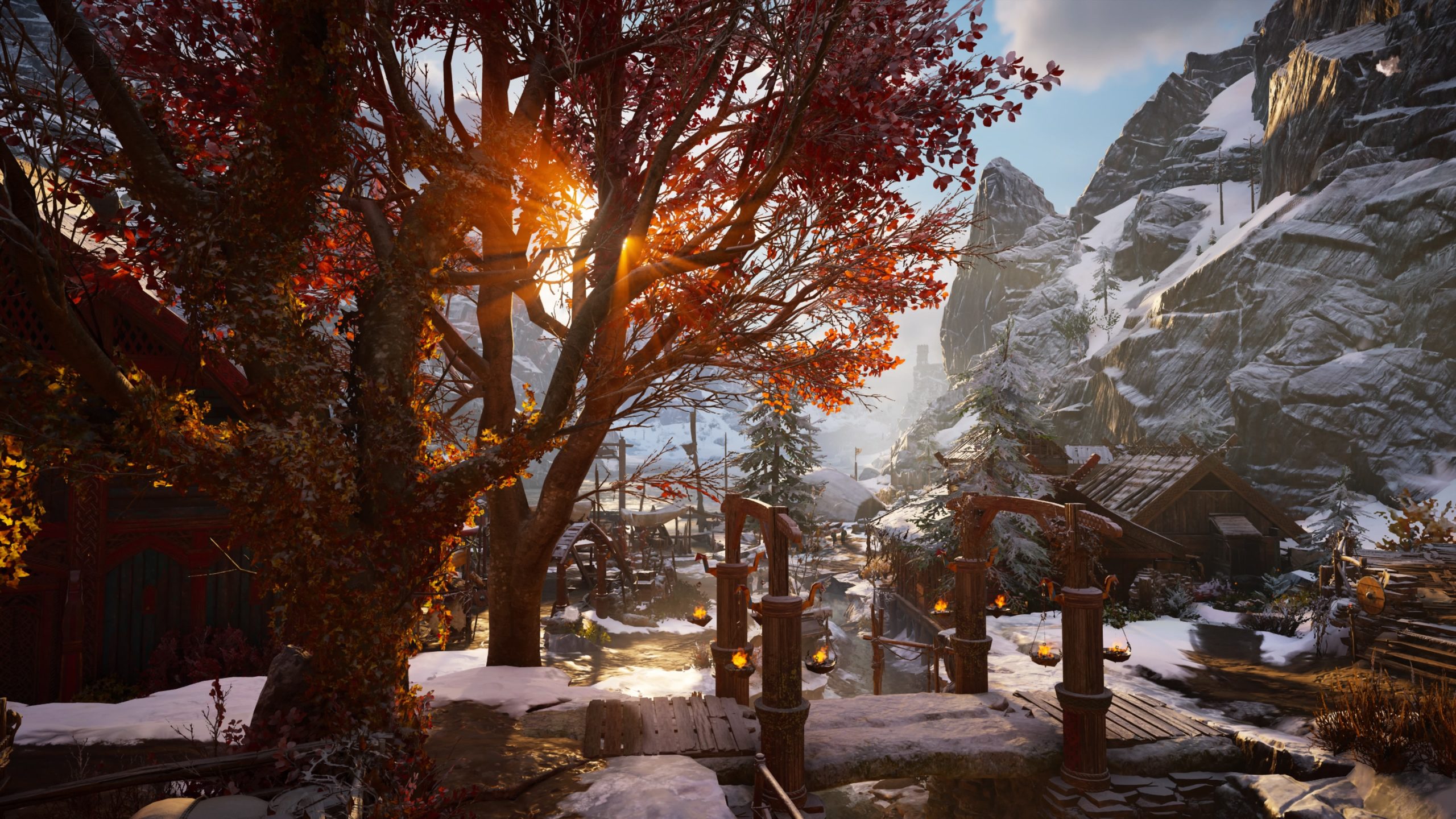 Lovely spot for a settlement

I'm a writer and aspiring fashion designer residing in the wasteland called Nevada. Also, I'm trying to juggle learning both Korean and Japanese.