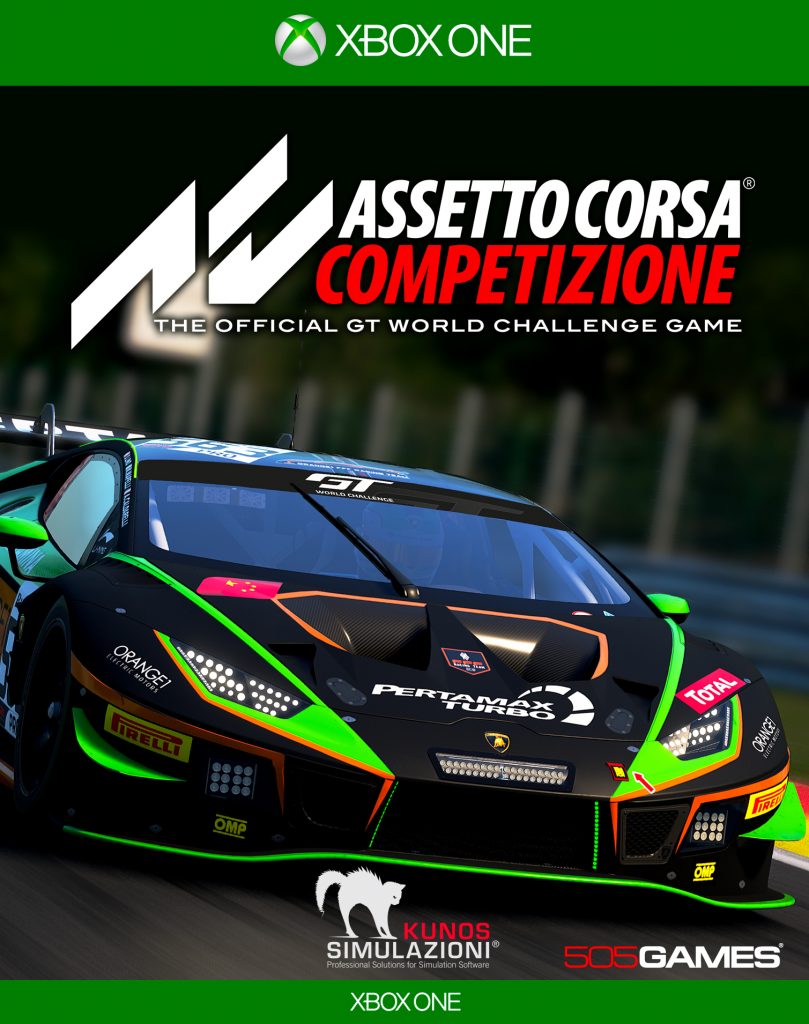 Any Sim Racer will recognize the name of 2014’s Assetto Corsa, and some may even say that it is the definitive racing simulation experience. Can its sister game Competizione  with a more specific focus to GT racing, live up to its hype, or will it be stuck in its shadow?

Violence: Just your typical risks of crashing into things 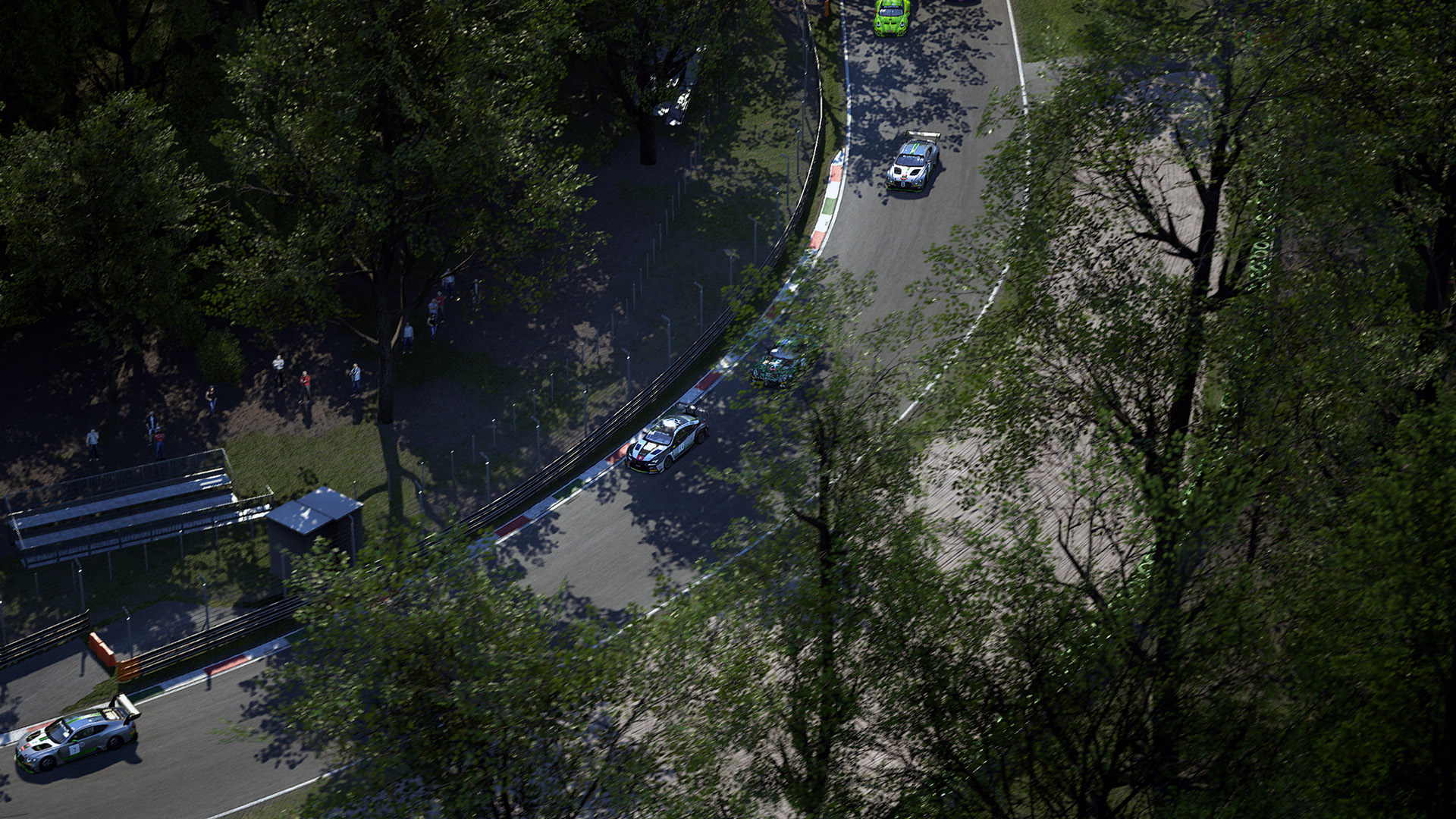 Assetto Corsa is an Italian phrase that is a part of any racing simulation fan’s vocabulary regardless of native tongue. It is known to be a full on racing sim that will test the mettle of anyone who dares don a steering wheel (or game-pad) against it. The game is often unforgiving of even the slightest of mistakes and will not hold your hand. Now with a new game on the market in Assetto Corsa Competizione, how will it compare?

First and foremost I must add that Competizione is not a remake or remaster of the original Assetto Corsa, but instead shifts its focus to being the official game of the GT World Challenge, more specifically the 2018-2019 Blancpain GT Series (now known as GT World Challenge Europe). As a result, there are not as many cars or circuits to race on, but that doesn’t mean there is no less fun to be had. 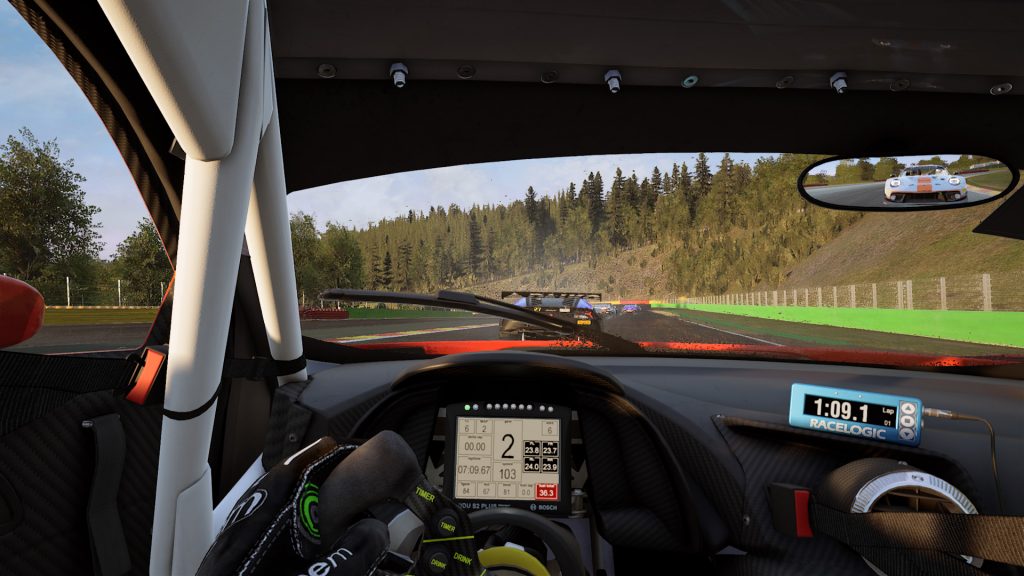 What is the GT World Challenge Europe?

The GT World Challenge Europe series is a variety of racing events involving cars specified to GT3 regulations. As the name says, the races take place through various countries across Europe from Italy’s Monza Circuit to the Nurburgring in Germany.

The race format of this series is different from other racing series such as NASCAR or Formula 1 where the victor is who crosses the finish line first after completing a specified number of laps, rather the races are time-based and the driver who finishes in the least amount of combined time once he crosses the final lap after the time expires, is declared the winner.

There are also two different championships for Sprint and Endurance races. The typical Sprint race weekend consists of two one-hour races, whereas an Endurance race can be 3, 6 or even 24 hours! 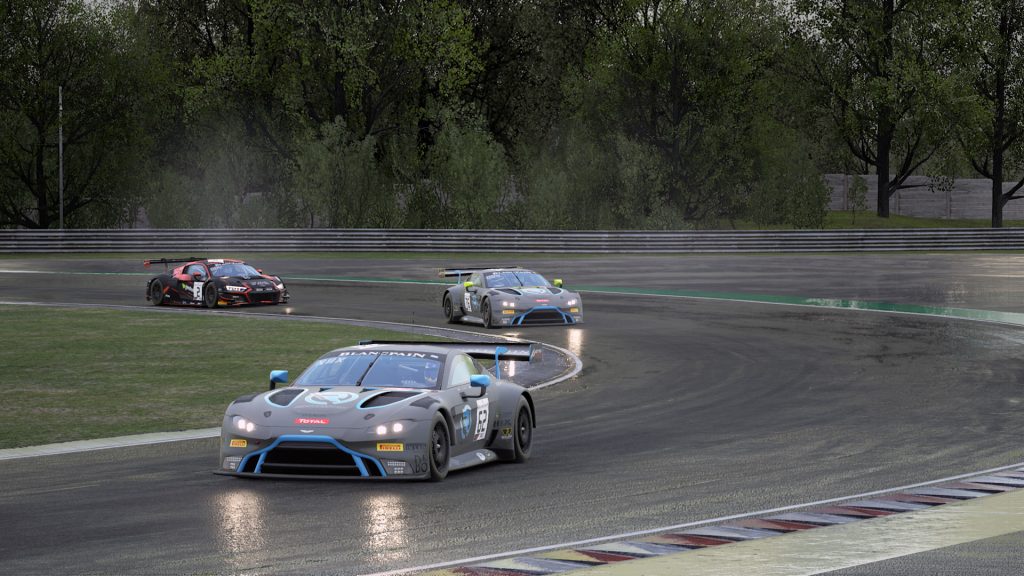 Before acquiring Competizione I had been shifting back and forth between the likes of Forza Motorsport 7 and Forza Horizon 4. I had worked my way up to being able to compete against the AI in those games on Expert and Pro levels with minimal assists using a controller, for I do not have a proper set up for a steering wheel. For this reason, the original Assetto Corsa eluded me because I’ve been told the game isn’t designed to be used with a controller, despite offering controller support. However, when I heard Competizione was being ported over with improved controls, I got excited.

Upon booting up the game, you are introduced to a menu with a few different modes to choose from. 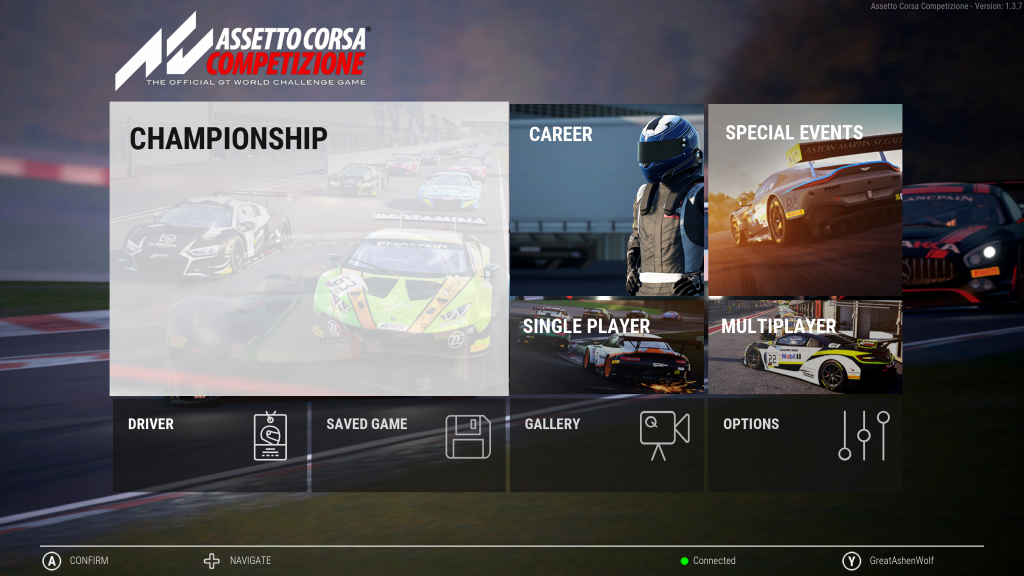 In Career mode, you start out as a driver participating in the Lamborghini Youngster Program at the Monza Circuit. You are to drive a variety of tests in ideal track conditions, wet track conditions and night driving for the game to test your skill level for your advance into the GT racing series.

Once you complete the tests, you are launched into the GT Racing Series on your own team, where you’ll compete in various events to try and become champion! 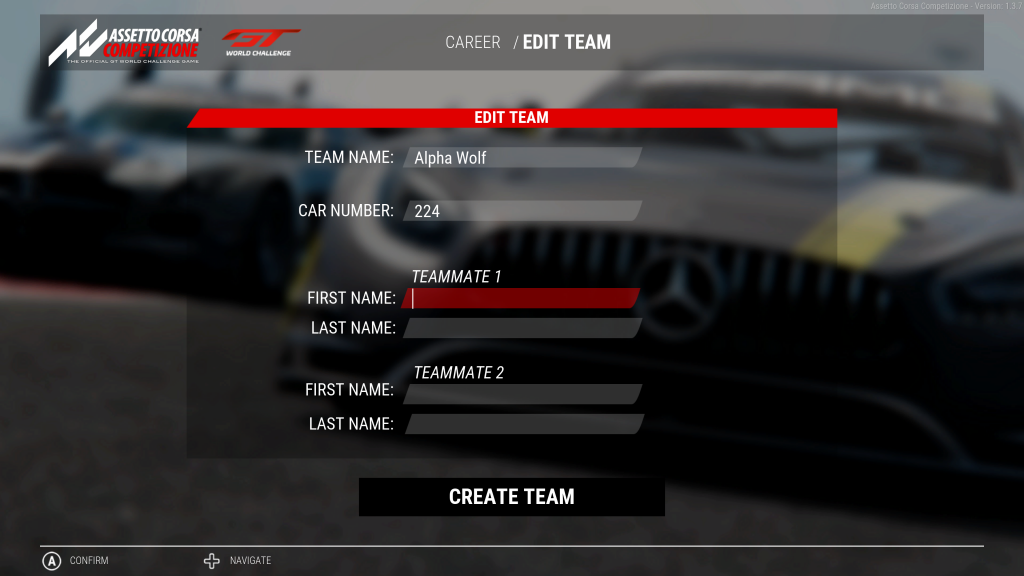 This may be the worst team you’ve ever heard of, but you have heard of me.

In Championship mode, you can customize your GT Series Season however you like. Choose from the Blancplain 2018 or 2019 season and edit the settings for season type, weather, opponent count, opponent skill,  damage, penalties and other sorts of factors such as damage percent and brake temperature.

Don’t feel like driving a full season? Make your own race! Choose from a list of game modes including practice, Quick Race, Sprint Race Weekend and different Endurance races. There is also an option to create your own custom race weekend entirely! 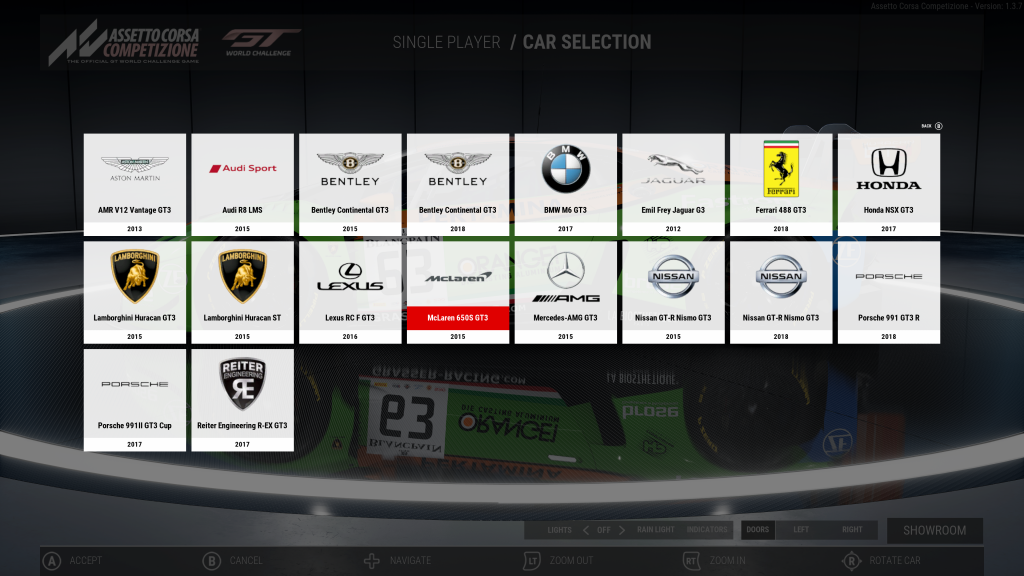 Anything but McLaren is heresy.

Are you an offline champion? It is time to take your skills to the real test and compete against other players across the globe via online multiplayer!

Race in special scenarios given by the game and compete against online leaderboards! 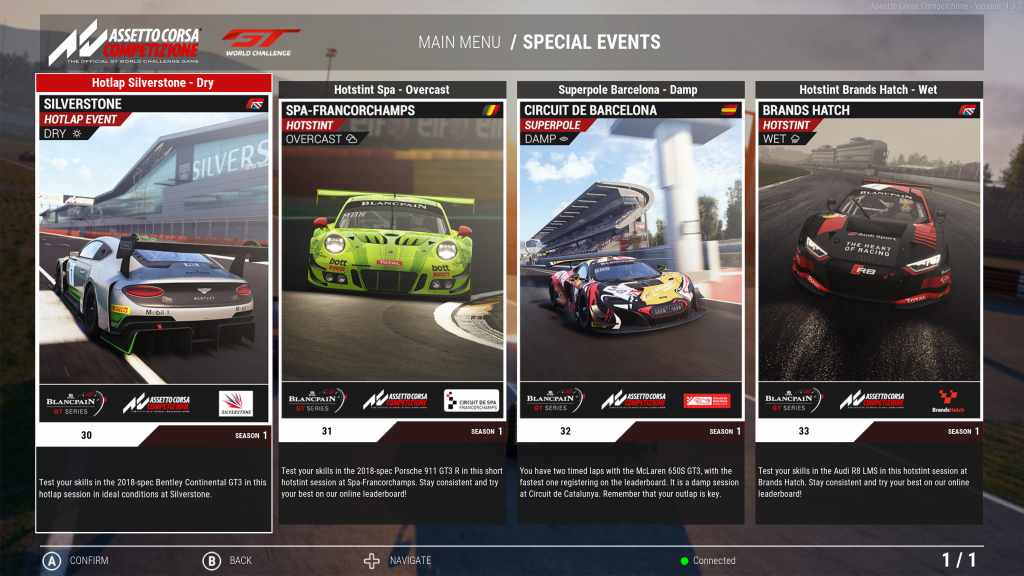 When I started up the game, I decided to hold no bars and dive straight into career mode. The first thing I noticed was that default for the game’s settings was with a manual gearbox and no racing line. It was at that moment that I realized that this game was serious. I turned on the racing line, deciding to turn it off once I felt more comfortable, and carried on. I was introduced to the game by 2017’s Blancpain GT World Champion Mirko Bortolotti, who is also the factory driver for Lamborghini.  After that moment, I was strapped into a Lamborghini Huracan ST and ready for my 10-minute practice session at Monza Circuit. 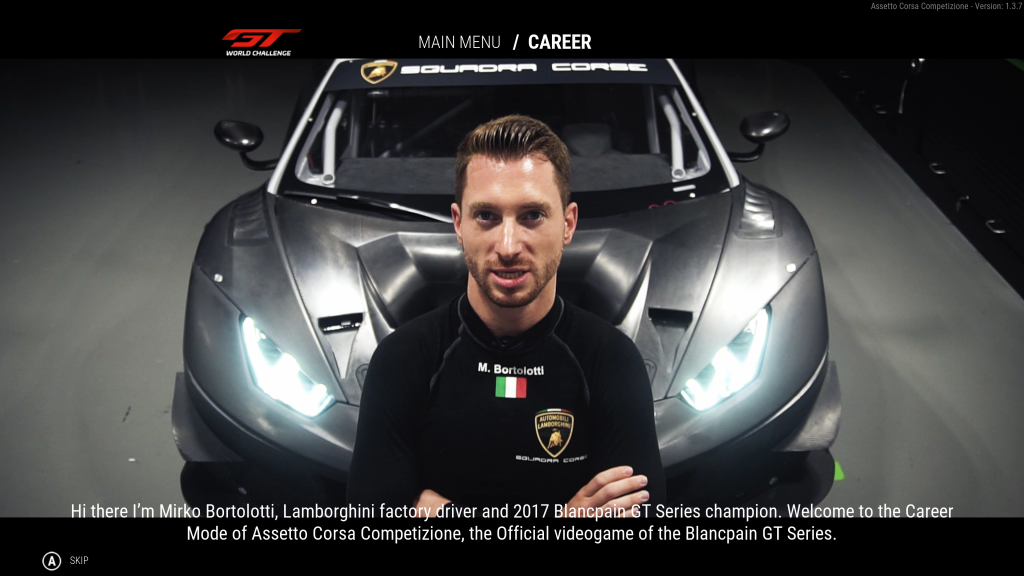 The face of a true champion

Loading into the game, I noticed just how excellent the car models look. At any camera angle Competizione is a gearhead’s dream. Driving on to the track however, everything else just didn’t look as good. This seems to be commonplace in racing games, where you’ll have excellent car and track models, but the ambiance around it just doesn’t look as good. The people around the track, and the vegetation looks stale, taking me out of the immersion. That aside, the game’s audio is utterly fantastic. The car engines sound great, and any other effects all sound great.

When I shifted into gear and went for a lap around the Monza circuit, I noticed how differently the car handles as compared to Forza Motorsport 7. 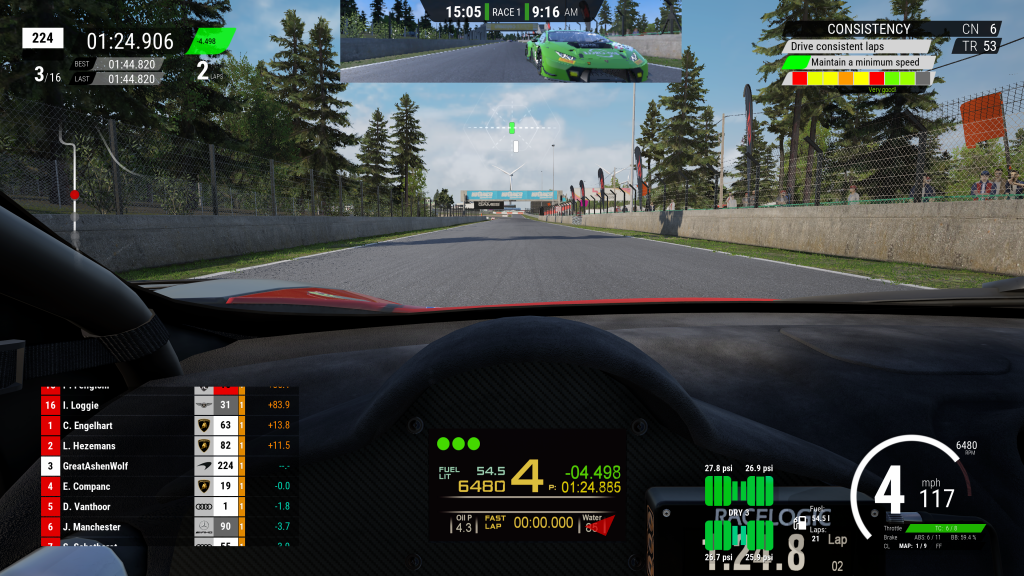 I felt my car sliding all over the place, often losing control due to the jerky nature of using a controller. This particular game rewards you for being consistent with your turns, and speed. It is hard to put in consistent laps  when you have to keep braking to correct your turns, or slow down more to have better control of your car.

It is tough to play any racing game with a controller. The more arcade racing type games such as Need For Speed, The Crew and even the NASCAR Heat series, using a controller is highly doable, but in simulation type games, you’re going to have a tough time. I was still able to manage a controller in Forza but in Competizione it seemed hope was lost.

I ended up resorting to online guides to help find a decent controller setup across various forums to see what worked for other players because the default setups weren’t doing me any good. And in a game that rewards for consistency and punishes for simple mistakes, fighting your car to stay on  the track is a major problem. Once I found a decent setup, I had a slightly easier time attempting to master the Monza Circuit and was eventually able to move on to the actual GT Series in a more…comfortable car. 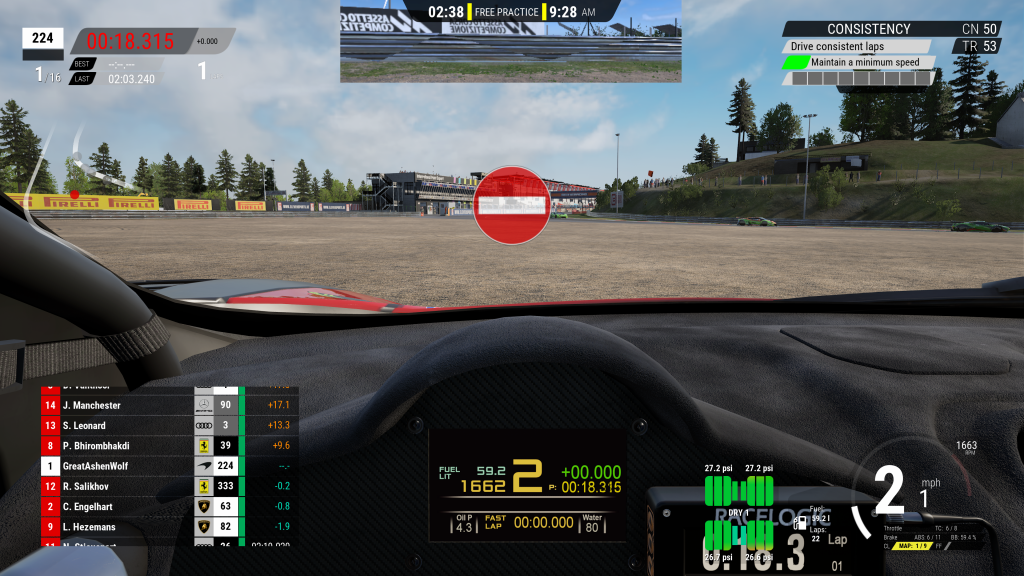 But still finding myself in the dirt

Aside from the controls, the AI in the game is perfectly balanced and suited to your driving skills. When you manage to stay on the track, you’ll be met with heated head-to-head battles with other cars and having to seize overtaking opportunities at just the right moment. Kunos Simulazioni succeeded at with creating an authentic racing experience, even if the visuals are not as impressive.

I haven’t been able to test this game with a proper wheel setup so I cannot say that the game may or may not play well with a steering wheel. To be fair, Competizione definitely feels like it was intended for steering wheels. Using the controllers, I found myself twitching the car around and constantly having to correct my steering, leading to other problems. Imagine trying to steer your real car using an Xbox controller and that pretty much sums up how this game plays.

I ran into some technical bugs during my time in Competizione, including issues like falling through the map and some lag during certain points in races, particularly around turns. Fortunately, these issues weren’t too frequent of occurrences and as a result didn’t detract too much from the game.

As much as it is frustrating to play with a controller, I still managed to find enjoyment after successfully completing races. There’s definitely some more fun you can get out of this game with a  proper racing wheel setup, and I will definitely keep coming back to this once I have one. For simulation fans with a good wheel setup, this is a great addition to add to your library. If you’re a casual racing fan, or do not plan to invest in a wheel, you may want to keep this one on the backburner. 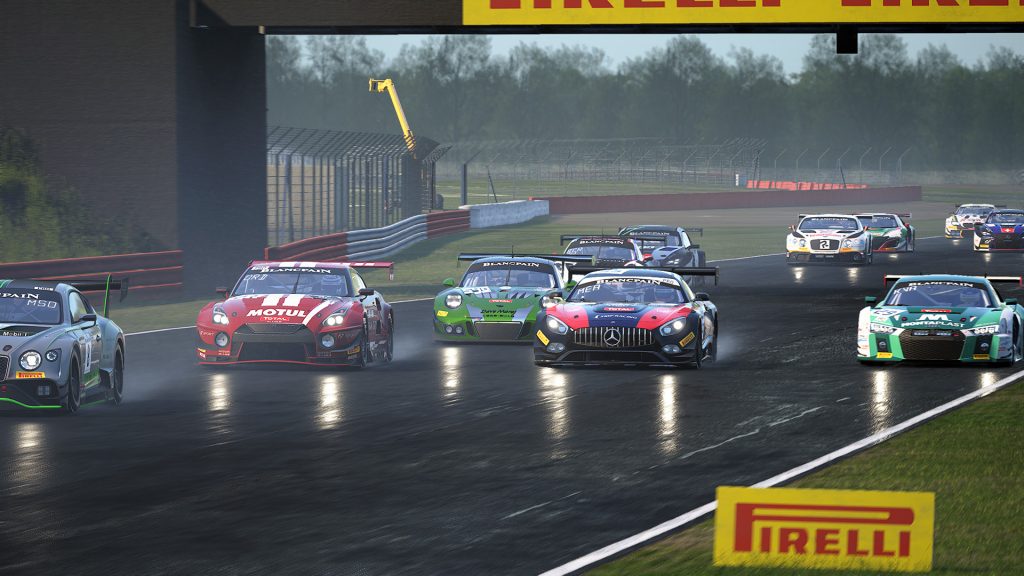 Assetto Corsa Competizione has built what could be a great foundation for pure racing simulation with excellent AI behavior and authentic audio, but if you don't have a steering wheel to use, you're probably not going to enjoy it as much.