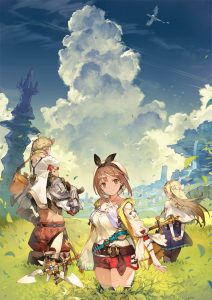 Atelier Ryza: The Ever Darkness & the Secret Hideout lets players go on an adventure with three young islanders trying to escape a mundane life. The game has a deep story that focuses on the theme of growing up. As a new departure from the mechanics the Atelier series is known for, Atelier Ryza tries to bring in a bigger audience by providing a new fighting mechanic, synthesis system, and mature story tones. 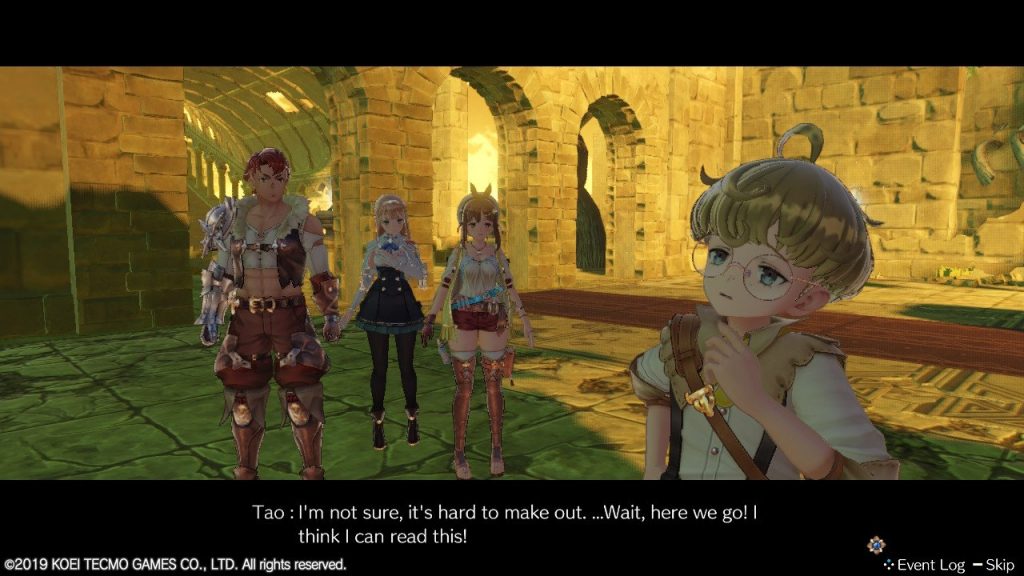 Magic plays a big part in this fantasy setting. Potions, cauldrons, spells, etc. are the main part of the game. Dragons, pixies, and other mythical creatures roam the lands, but their appearance is of a cartoon nature.

Atelier games give skimpy outfits for girls oftentimes. And often they do not. It can be a near-perfectly clean game with one character dressed coarse. Ryza and Lent show the most skin out of all characters. In case it hasn’t become obvious, Ryza wears very short shorts that reveal her thighs, but enough to cover her posterior. Her shirt hangs a little low. Lent, the swordsman, wears small shirts that show his midriff.

Lent’s father, Samuel, is the town drunk, and is always intoxicated. Though he is a means for Lent to improve himself, Samuel is also a joke, despite his mercenary past, as per Japanese fashion.

Atelier Ryza sadly doesn’t explore deep topics enough to offer any answers- Godly or ungodly. Sadly, they are novelty. But the game serves as a reminder that the world also views these things as novelty—things that are. Our faith says otherwise. “Love one another as I have loved you” (John 15:17), “Pure and faultless religion our Father accepts is looking after widows and orphans,” (James 1:27), and for those of us dealing with growing up and taking on all manner of responsibility, “Do not be children in your thinking… but in thinking be mature” (1 Corinthians 14:20). 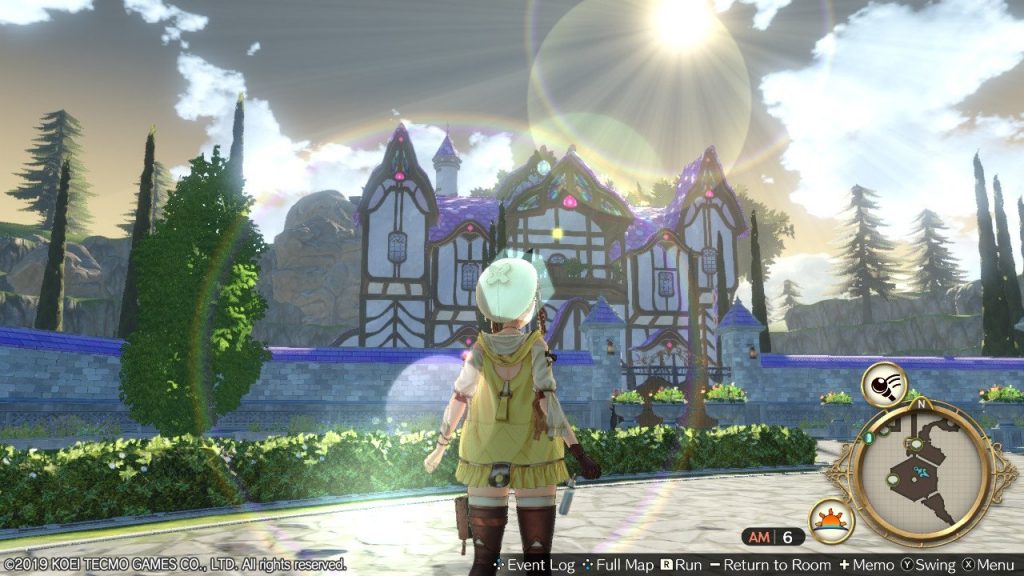 When people talk of Atelier games, they are synonymous with perfect-world settings—the world-ending catastrophes at the end of the games don’t seem to be impactful. When I mention mature tones, I don’t mean themes too heavy for teens to handle. Even with the T rating, problems are shallow: running out of milk, waiting for a storm to pass, or stressing about passing a test. But those are the games of the past. The world of Ryza tries to explore themes of domestic-abuse, bullying, and learning to be an adult.

Right from the start you see how the trio is treated as kids. The bookworm is picked on, the young girl is told where her future should be, the rich daughter is not allowed away from her house, and the muscular friend seeks acknowledgement as a man. All four of them make plans to get away. They find an old house on the mainland to serve as a secret hideout. Along the way they find two adults who help them learn to fight and use alchemy. Things begin to change for them, and the story eventually picks up, taking some twists and turns I don’t want to spoil. I will say I felt satisfied and given closure.

The new fighting system takes inspiration from early Final Fantasy games where picking commands is timed, so the fighting flows. Instead of menus, all options are relegated to buttons. Pressing A is a normal attack, Y is your special attacks, and X brings up your item list. You can hit the shoulder buttons to change between your party members at any time, allowing players to specialize if needed. 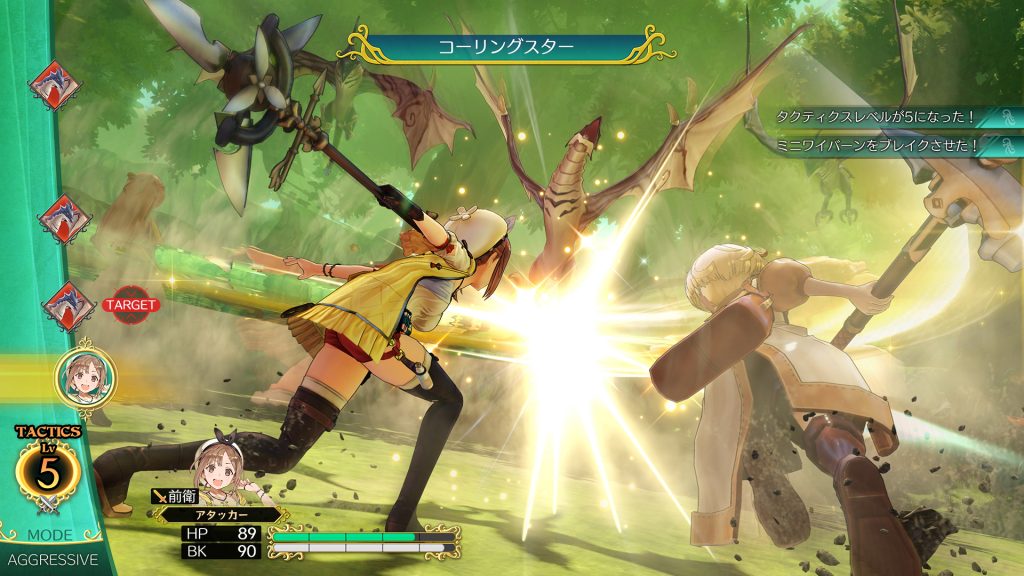 The best part is the shared AP during battle. It’s tied to Tactics, a little augment players use to spice up the fighting. When you use the AP you increase the level of your Tactics, which gives you more hits, more abilities, more EXP, and other things. At the max level of Tactics is your Fatal Drive, the uber powerful attack. In the later game, mastering this system becomes key. While it was a learning curve, I found it to be like Grandia games, except without the extremely long, boring, spell casting.

Item creation is what these games are about. But an issue for me was the ridiculous farming. Past games filled one material down with a huge list of traits and effects. Anywhere from particular monster debuffs, to very particular percentage of defense boosts. If you knew how to play the game I would say seventy percent of them were absolutely unnecessary. But  then those useless traits become important as sub quest objectives for coins or other items. What I found worse were the end game traits; a.k.a. the means to beat the optional bosses, sometimes even the final boss. It never failed, every game progressed naturally, and had a decent difficulty increase and pace. All of a sudden a huge wall of difficulty arose at the very end. Up until now, every Atelier game ended this way for me, no matter what difficulty I set.

Atelier Ryza bravely turned things around to make item creation fun, but not tedious. Synthesis is a chart of deciding where to go. Previous installments used a puzzle game to determine the outcome of the effects.

Increased pocket sizes of the main character makes synthesizing easier than before. Imagine holding thirty items, returning to drop them off, and going back out into the field. It becomes a chore when mass producing, which will happen from time to time in order to grind out levels. Ryza cut out the middle, which is a welcome change. 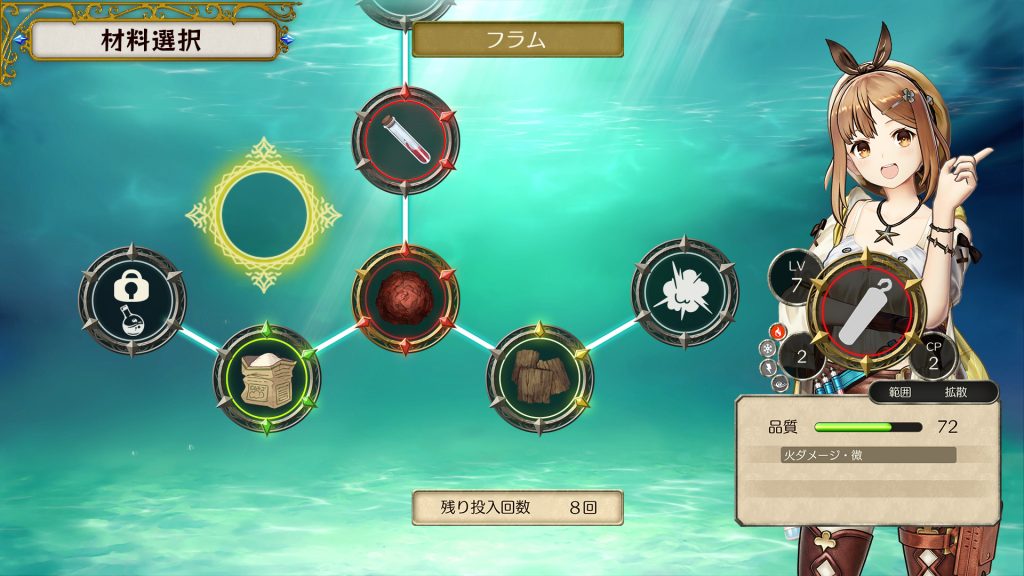 Having played my share, I really enjoy Atelier Ryza. I was not a huge fan of the previous installments’ stories, since they offered nothing meaty. To fully complete the games it took a horribly long time to get just the right effects and traits. Finding rare items with these traits meant relying on RNG, and most of the time the items would not have that trait/effect. Atelier Ryza did well in eliminating that. Getting rid of side character side-stories was a small loss, however. But according to an interview, the developers wanted to focus on the story, and I’m glad they did.

I’m kind of disappointed in the character development. The biggest elephant in the room gets no conclusion. Lent’s father simply is the bad dad who drinks, and… that’s it. Tao could have had a really great transition into becoming brave, but his character remains timid throughout.

But this was a departure from their normal, yet consistent, routine. If this was the standard Atelier experience from now on, I would not be upset. This is a good first Atelier to get into, and if you like it, go play Atelier Sophie next.

This is a good Atelier to jump into the series if you're curious.