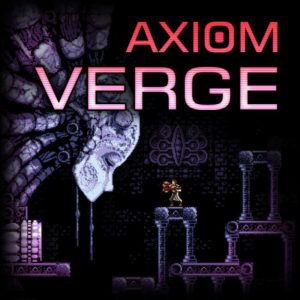 I try to focus on reviewing games that have been released in the past two years, but here I am writing about Axiom Verge, a game released in 2015. While we at GUG occasionally compose reviews on older games, a key motivation for staying relatively current is that doing so fulfills part of our mission to educate Christians on how to safely consume pop culture (with a Biblical worldview). Yet, the with the advent of Nintendo Switch becoming the industry’s port-machine, dozens of games have had their mindshare renewed.

Axiom Verge was re-released on the Switch in the fall of 2017, so some could argue that I am still behind the ball. Nevertheless, after digging this game out of my backlog during a recent vacation, I felt compelled to write on it. I am pleased to report that Axiom Verge is an excellent homage to Super Metroid, because I would be ashamed to recommend a bad game even for a good cause.

Behold my ulterior motive: I want to inform our readers that the son of developer Thomas Happ, Alastair, developed Kernicterus after his newborn’s jaundice was not properly treated. Because of this as an indie developer, Happ has depended upon the success of Axiom Verge to pay for his child’s medical bills ranging in the tens of thousands of dollars. In a generous gesture rarely seen from businesses, Badland Games, publisher for the console versions, has been donating 75% of its profits for this game to care for Alastair. 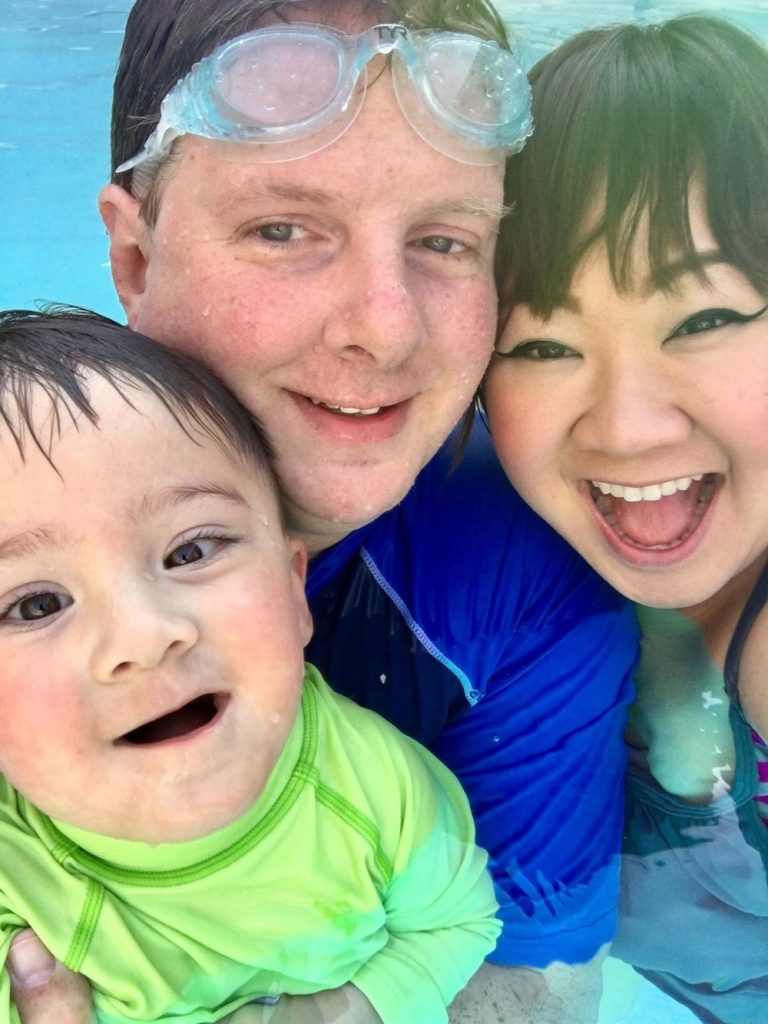 This is the kind of story that makes me want to buy Axiom Verge twice. I certainly would like to see all of our readers buy it. If this introduction did not provide enough motivation, then perhaps the remaining contents of this review will.

Axiom Verge is designed with PG audiences in mind. I do not recall any specific content that would prevent me from allowing my children to play unsupervised. Pacifists should note that shooting is a core mechanic, but targets simply vanish upon death. 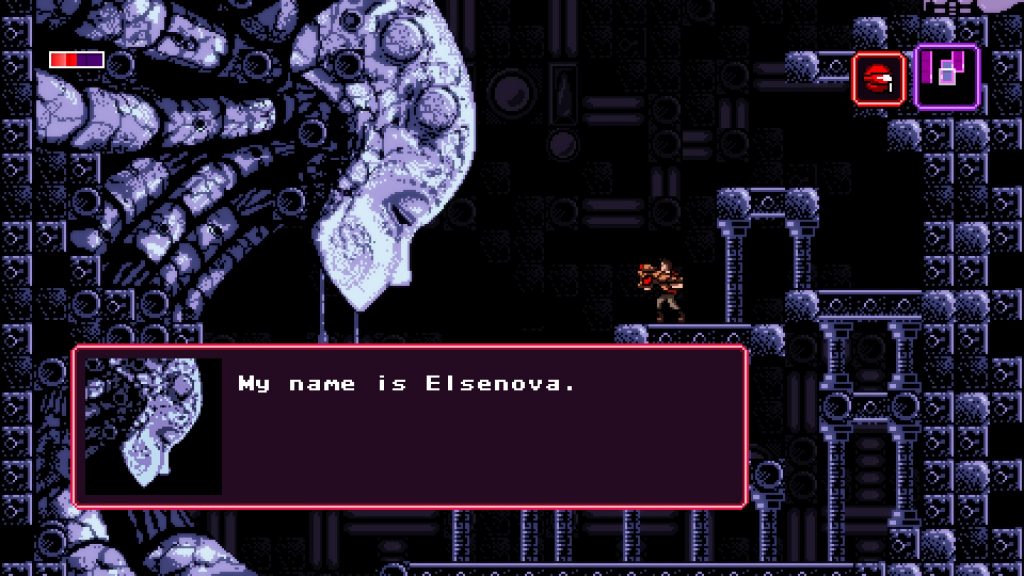 At a remote science facility in New Mexico, researchers Trace and Hammond conduct an experiment that reminds me of the the Black Mesa experiment that precipitates the events of the original Half-Life game. Likewise, Trace’s experiment backfires, and the laboratory explodes. He awakens in a rebirth chamber, seemingly Bioshock style, where a mysterious voice instructs him to find something useful in the next room. It is the Axiom Disruptor, an alien weapon that behaves like an omni-tool. Trace proceeds through the Metroid-like labyrinth while shooting everything that moves. Eventually, he encounters a monstrous robot revealing its name: Elsenova. She is the source of the voice that has sporadically guided Trace from the beginning. Before shutting down to save energy, she informs him that he must activate a power filter to save her life. After our hero fulfills her request, she discloses what she knows about his situation. 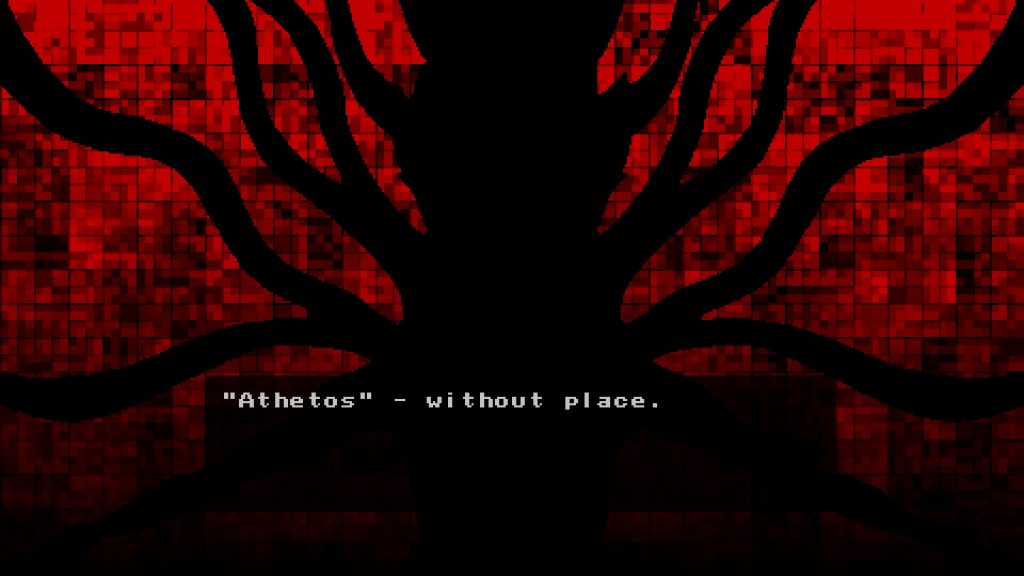 What is a good guy quest without a bad guy to defeat?

I have yet to play a bad Metroidvania. Accordingly, Axiom Verge carries on the tradition of maintaining the apparently infallibility of the genre. Remarkable with this title in particular it provides a story with intrigue. Rarely do games lean more in the Castlevania direction of the “Metroidvania” genre in terms of story, often relying on minimalist or emergent narratives. Axiom Verge is littered with lore for those looking for depth in their stories, alleviating players from piecing together the story as the Metroid formula typically dictates. The distinct personalities of the individual “Rusalka” like Elsenova ensure that Trace never feels alone, and their characterizations keep things interesting with every dialogue exchange. The plot twist particularly generates some palatable tension since Trace is a pacifist forced to violence in self-defense. 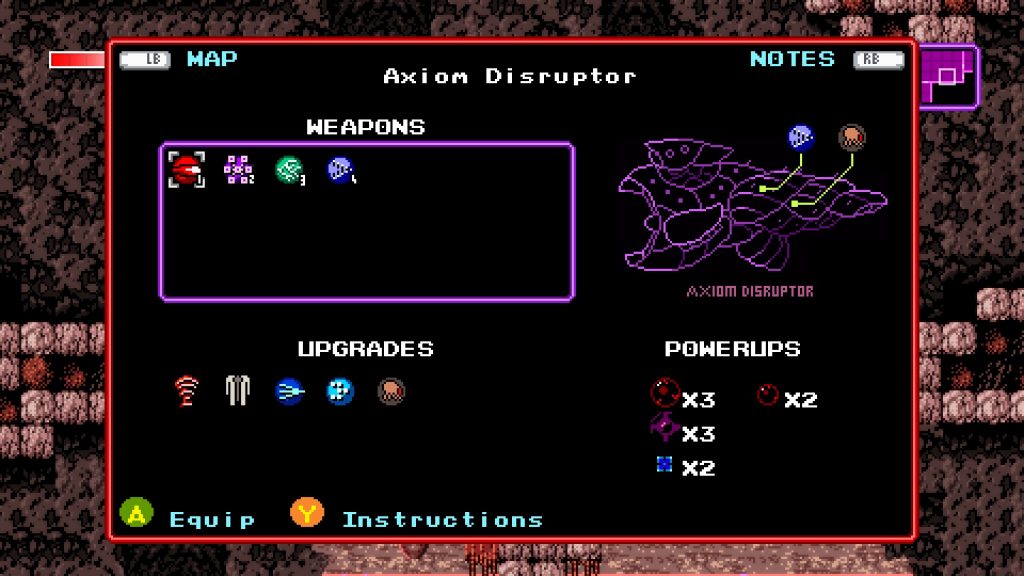 By the time it is all said and done, this screen is going to be jam-packed with weapons, upgrades, and power-ups.

The number of non-mandatory weapons that one can find in Axiom Verge rivals the arsenals seen in games where shooting is all there is to do. Of course, this genre necessitates platforming and puzzle-solving, so the selection of armaments here is astonishing. The size of projectiles, range of weapon, and damage dealt are all upgradable properties given the appropriate appropriate power-ups. As with Dead Space, I appreciate games where the default weapon remains relevant from beginning to end; all other weapons must be discovered. The initial Axiom Disruptor is more than adequate, but I eventually dropped it for the Hypo-Atomizer, a weapon that is difficult to describe because it spawns additional projectiles as it moves in a line  across the screen. I find the Voranj appealing because of how it bolts across the screen in a cascade of lightning. The Lightning Gun all but breaks the game, and yet, it is still my favorite weapon due to its homing properties. For heavy cross-screen firepower, I whip out the Ion Beam, which behaves like a heavy laser. 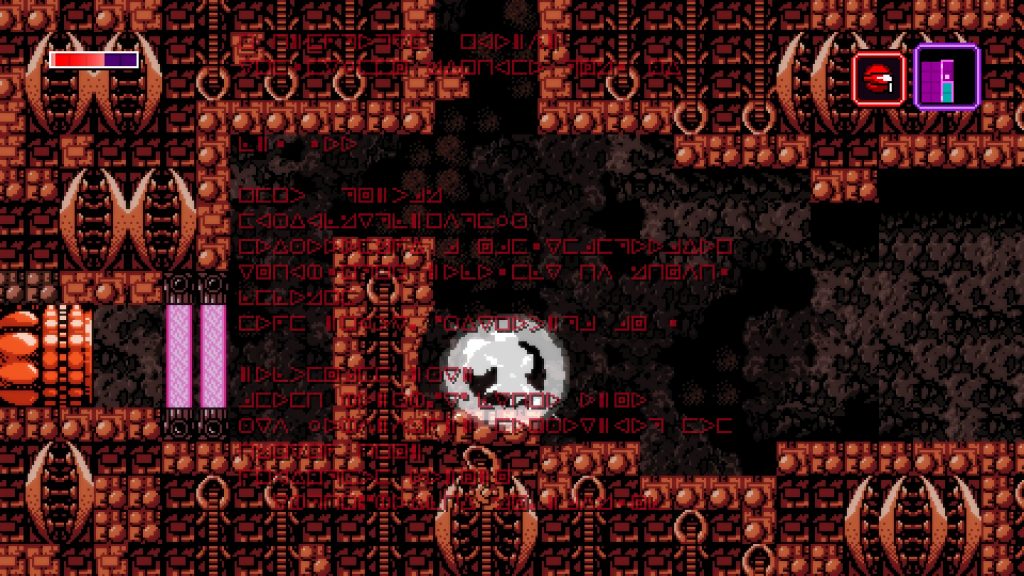 Being upgraded is exciting!

Another key aspect of gameplay in Axiom Verge concerns its radical approach to traversal. Anticipating at least a double-jump or a wall climb, I was bestowed an augmented jump, Axiom Verge at first grants a launchable remote drone that can be used to explore areas too small for Trace, essentially functioning like the Metroid morph ball. Later, this drone can be used as an anchor point for Trace to teleport. But well before that, he will find a lab coat that allows him to “glitch” through walls, causing intentional artifacting on-screen that reminds me of playing video games on the NES when they would crash. The Address Disruptor, or “glitch gun,” is not only used to clear impassible, malfunctioning terrain, but it can also “glitch” enemies; this can transform swarm generators into healing machines, convert enemies that shoot lasers to hurt the player into lasers that hurt the environment, or drastically reduce the danger that an foe poses so that they become more manageable. The ability to “glitch” things intentionally is one of the coolest mechanics that I have seen, hitting me right in the nostalgia. 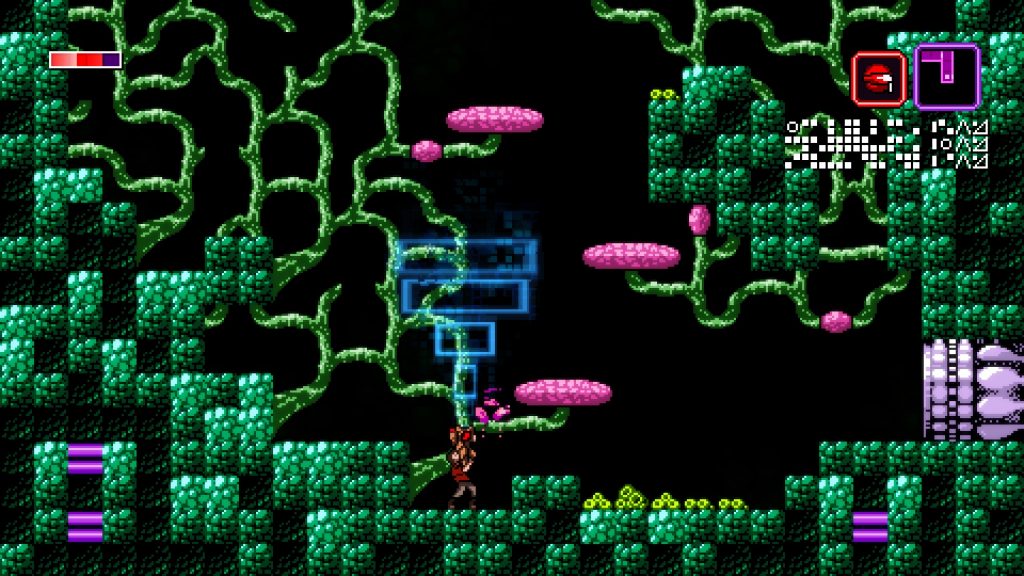 The Glitch Gun is the coolest weapon concept since the gravity gun in Half-Life 2.

Of course, I do not long for the days when my NES games would crash, but Thomas Happ recognized such events as something older (ugh, did I really just acknowledge that?) gamers would remember. Because we do not remember NES glitching fondly, he integrated them in a positive light. Happ’s prescience does not end there; rather than conform to the trend of pixel art in indie games, he achieves an impressive blend 16-bit graphics with 8-bit sound effects. Some of the animations, I am certain, would have only been possible on 32-bit software. And, as much as I appreciate the artwork of Ayami Kojima of Castlevania: Symphony of the Night fame, the artwork of characters such as the Rusalka Elsenova is simply astounding. Encountering each is a spectacular treat, making me lament that common enemy encounters were as detailed. 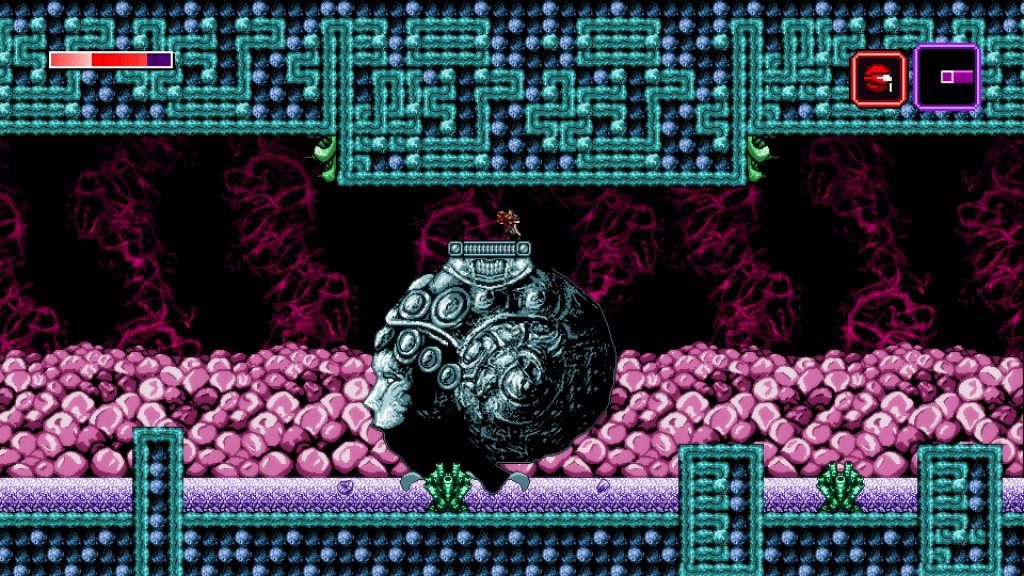 For some reason, this Rusalki reminds me of the Oocca in The Legend of Zelda: Twilight Princess. Its name, after all, is Oracca.

I manage to forgive the fact that enemies are more reminiscent of NES sprites than SNES ones because the game’s music is worthy enough to belong a list of all-time great OSTs. Anyone who can listen to the opening few seconds of “The Axiom” without nodding their heads when the bass drops at the six-second mark simply lacks a soul. Those paying close attention can hear small traces (he he he) of “Brinstar” in “Trace Awakens.” “Vital Tide” could be a direct sequel to “Inner Darkside,” an all-time great. I certainly was not expecting the kind of range that the South Asian sound samples that “Inexorable” provides. “Amnesia” conveys its name precisely. Those who did not get enough of leitmotif from “The Axiom” at the title screen can feast their ears on “The Dream.” I could go on, but how many songs does one need to determine that the OST is excellent; I would prefer to end this paragraph with “Cellular Skies“ as it is simply the best song in the entire ensemble. 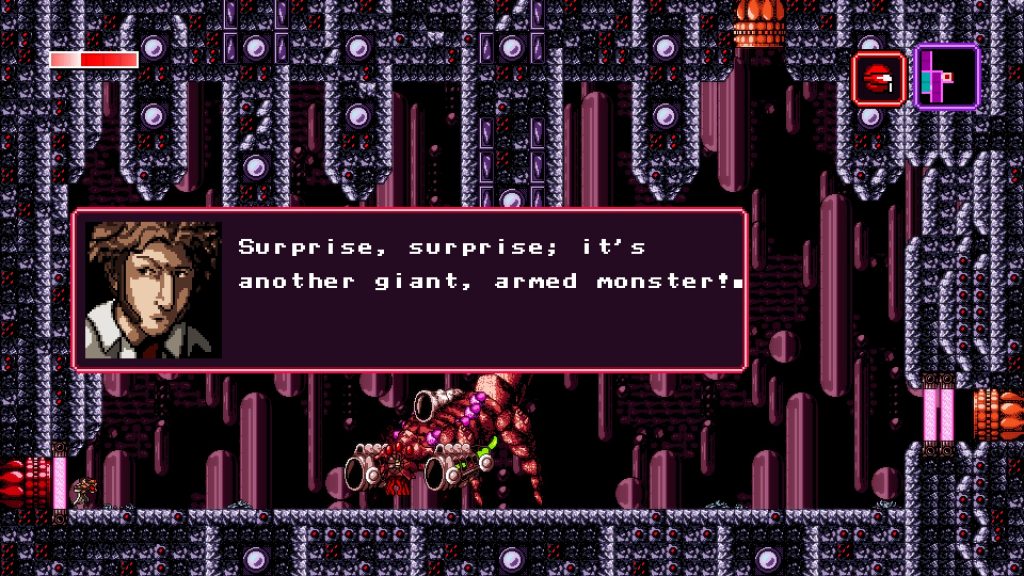 Anyone reading this review not convinced that they should buy Axiom Verge are likely looking for reasons not to. There is potentially one, but it is a feeling that occurs only in the very late-game. Because it lacks the Nintendo-easy feature of pinging the next location to progress in the game should players fail to add percentage points to map exploration of items collected, there were times in my final two hours when I did not know or remember what to do or where to go. I ended up backtracking a lot, which disrupted the pacing. While seeking the next objective, I ended up discovering many weapons that I had previously missed, such as the flamethrower, but because I was in the last phases of the game, these discoveries dispelled the immersion—certainly the assumption—that in a Metroidvania, everything I collect is essential to beating the game. Instead, this game simply provides more options for taste; I prefer everything serving a specific purpose. 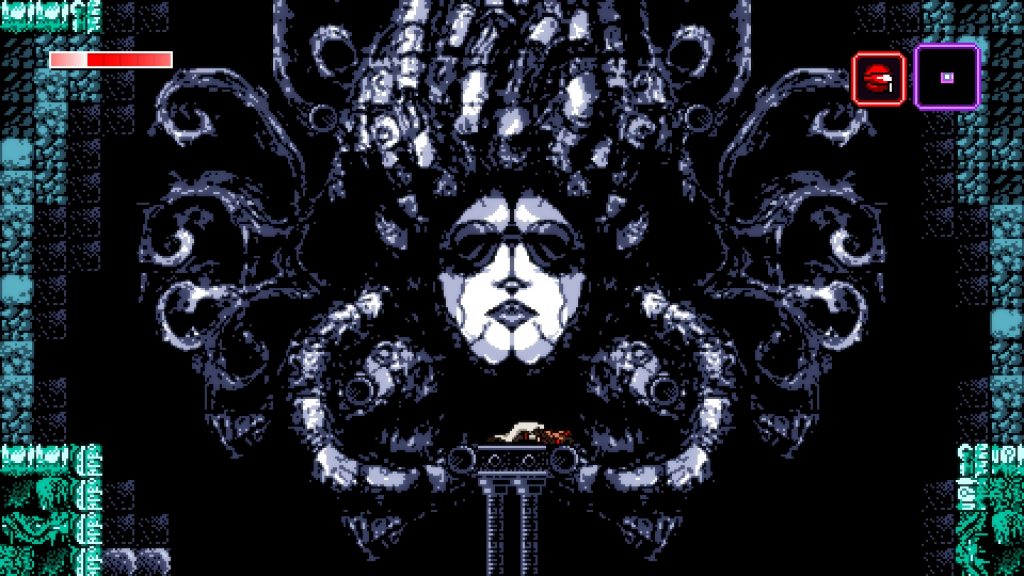 I do not know if I should be intimidated or impressed by Ophelia.

Here is the best part about Axiom Verge: Tom Happ developed this entire game by himself! Consider that there are games like Destiny or Fallout 4 or 76, developed by massive teams, and they still fall short of the mark. Happ performed the coding, drew the art, composed the music, and drafted the script all by himself, and the end result puts AAA efforts, let alone other indie developers, to shame. 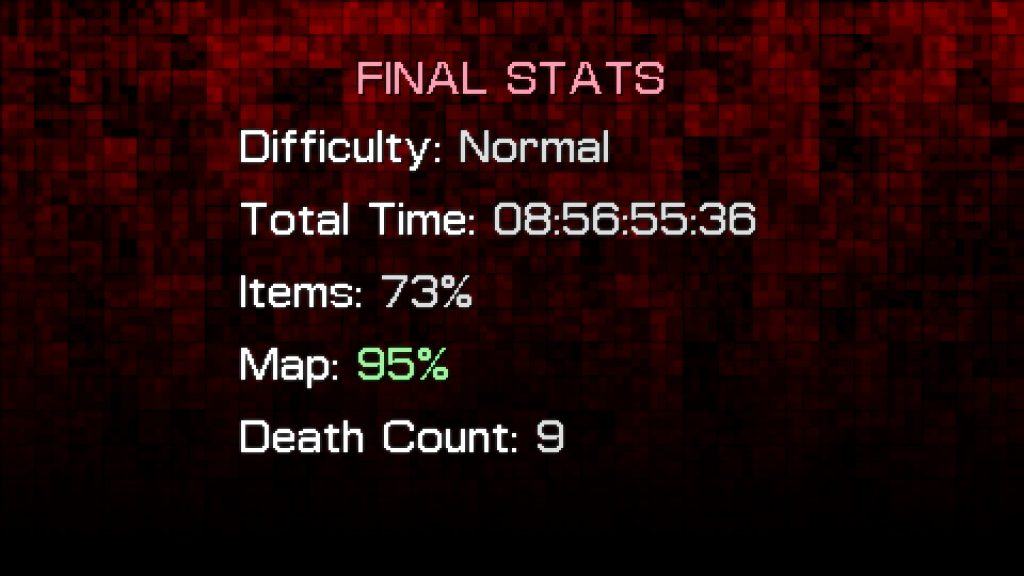