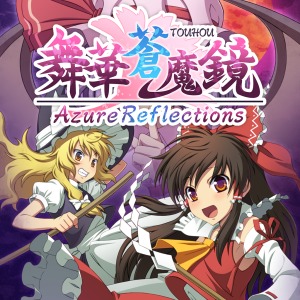 Shoot ’em up (SHMUP) games have been popular since their rise in arcades in the 1970s. Over the years, the genre has evolved to press the boundaries of challenge while staying relevant with the interests of gamers. Though genre cornerstones like Space Invaders and R-Type have conditioned us to enjoy the nondescript cockpits of spaceships, modern shoot ’em ups have pushed the genre forward with characters, voiced dialog, and more. Does Azure Reflections scratch that same primal itch, though? 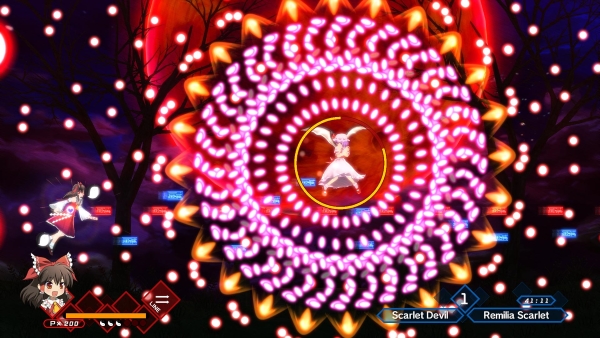 Characters range from shrine maidens to witches to demons. It’s all put on with a cute anime-styled spin. The darkest magic in the game is from the villain casting a spell that keeps characters in the world to continue fighting within a time loop.

Characters go back and forth discussing each fight, but it’s largely tame. They just enjoy a good battle.

Though there is no explicit sexual content in Azure Reflections, some of the promotional material (particularly in the trailer included with this review) and a couple of trophies chastise the player for trying to look up a character model’s skirt. This critic believes some cultural sexual sensibilities may have crept into the game (every single character in the game is a teen or pre-teen girl). The game itself has nothing explicit or crass in it. The core gameplay is just a fun, cute shoot ’em up with character customization options (like bunny ears, cat paws, a mustache, and so on, which do affect gameplay). 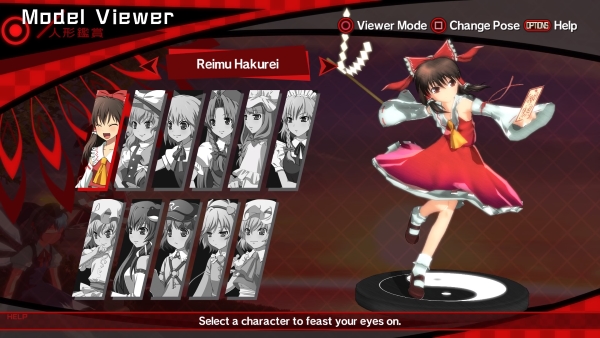 Despite the characters being at odds, many of them seem friendly enough when they encounter one another and just want to have a good battle. They even often make amends or concede defeat and welcome the other to continue on their journey. 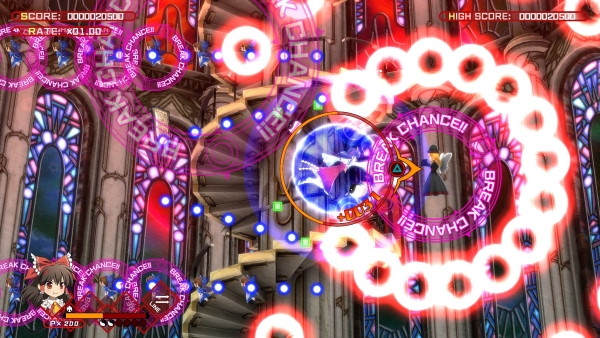 Over the years, I’ve thought of shoot ’em ups as a waning genre, relegated to the past, only to make its way back to the main stage when a company wanted to release an anthology of arcade classics. After all, the mechanics seem to be played out, right? You’re just floating through stages, dodging bullets and dishing out as much destruction as you can (often with the help of powerups). Games like the recently re-released Ikaruga have found ways to innovate over the years, but the genre has largely felt stagnant. With a few of its added features, Azure Reflections feels like it stays true to the genre while innovating in its own ways.

As with other bullet hell shooters, you’ll move around the screen trying to avoid a cacophonous deluge of projectiles while dishing the damage back out. Given the size of your character on screen, that can seem impossible. The hitbox you have to be worried about here, however, is actually just a small heart positioned at the waistline of each character. Beyond that, much of the game comes down to pattern recognition and avoidance. Azure Reflections onboards new players well, though, by offering multiple difficulties. The easier difficulties offer players simpler versions of each bullet pattern. As you become more confident, you can try ramping it up and really testing your mettle. 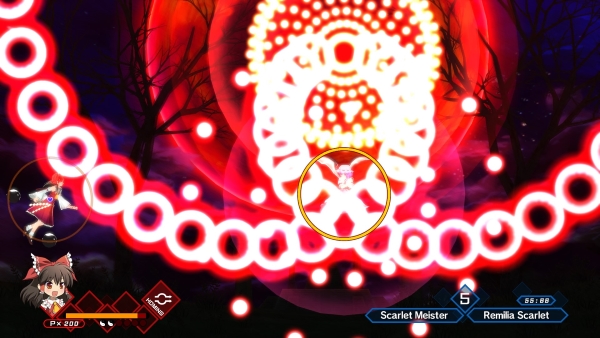 Beyond the basic shoot-and-dodge loop, Azure Reflections gives players several different ways to play the game. You start with one character and three bullet patterns to choose from. You can get orbital assistance that shoots in a straight line ahead, 45 degree angle ahead, or homes on nearby targets. Each character also has a special ability they can use (like dissipating all the bullets in a circle around them or shooting a giant laser beam). As you play, you’ll earn currency you can spend between runs to buy accessories. While you can customize the look of your character with some cute goofy add-ons (things like cat ears, a rocket backpack, or a glue-on mustache), the accessories have serious in-game effects as well. You may take pride in your customized cute little witch, but knowing she also has auto-firing, faster movement, and higher damage output makes it feel much more empowering too.

The game is fun, but it’s not without its faults. My primary issue with Azure Reflections gameplay is that, unless you have a near-perfect run and manage to finish without using a continue, there’s a hard cap on the campaign playthrough. Though I know it’s a SHMUP mainstay, but there are no alternate ways to play the game either. You’ll have to start from the beginning of the story every time and, unless you get that pristine run, you’ll never get to see the final couple of stages. The number of stages is also relatively low. If you’re good at SHMUPs, you’ll be able to finish the entire story once through in about half an hour. The real draw to keep coming back is in unlocking each character and all of the accessories. 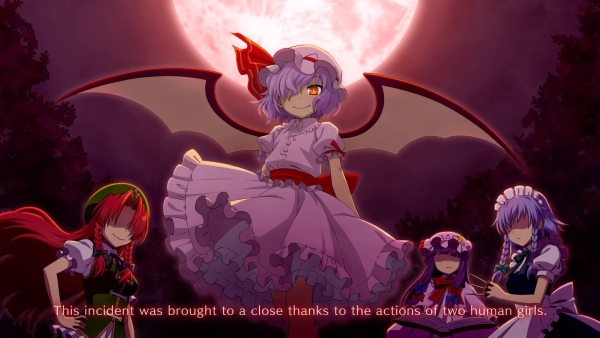 Let’s shoot straight. *Snicker*. SHMUPs have never been well known for their storytelling or characterization. In Azure Reflections, the characters are all pulled into a sort of alternate reality due to a pervading red fog which, we learn, is being caused by the ultimate villain. Our heroes have to travel to the castle to topple the foe, battling other characters who’ve been pulled into the miasma along the way. Though the overarching narrative isn’t anything special, we get a sense of who the characters are and how they relate to one another thanks to some exposition and character interaction. It’s fairly rote, but it’s more than most other SHMUPs are willing to invest to their narrative. Azure Reflections even has voice acting (albeit in Japanese), so we get to feel the emotion in each scene. 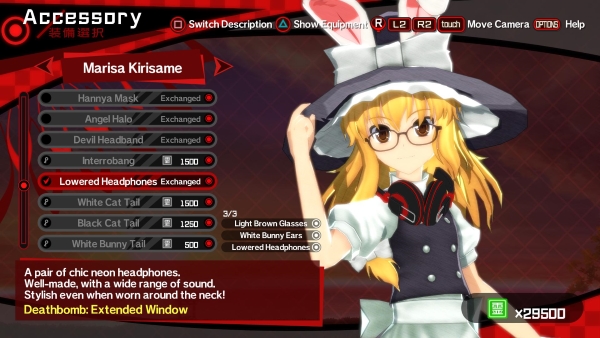 Azure Reflections is a great looking game. The anime character designs are done by the same studio behind Croixleur Sigma and being able to outfit each playable character with visible accessories is always a great touch. The on-screen action when you’re deep in a battle with colored projectiles flying everywhere is pure eye candy, too. There’s something undeniably enticing about watching the action play out, even if you’re not the one in the driver’s seat. That said, the stage design feels pretty inconsequential and the enemies apart from bosses are pretty forgettable. The soundtrack helps drive the on-screen action, but it’s ultimately fails to have the staying power that would warrant a soundtrack purchase. I do appreciate the voice work the game provides, though, as you get a sense of the characters emotions throughout the game even if you can’t understand Japanese (which I can’t). 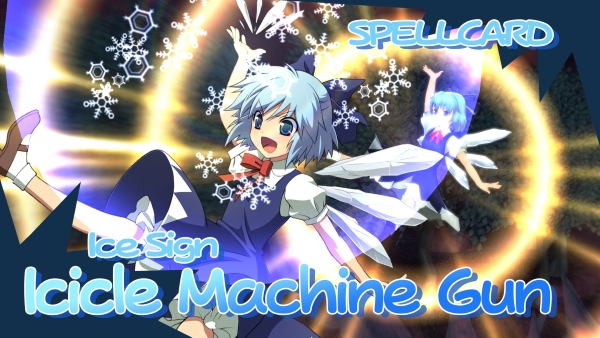 While bullet-hell SHMUPs may be more niche now than anything, Azure Reflections is a fun, eye-catching game fans of the genre will be able to sink a few hours into. When you add all of the unlockables and customization options, there’s a substantial game here for shoot ’em up fans to enjoy. That said, if you don’t enjoy shoot ’em ups or are cautious of games with a brief story, you may want to give this one some more intense consideration before taking the dive.

Azure Reflections is a fun SHMUP that allows players of all skill levels to get a taste of the action while offering quite a few unlockables and customization options. It has a weak story and the campaign will be over quick, so staying power may be an issue for some players. There's something undeniably euphoric about nailing a difficult fight or watching others maneuver through the chaos.