A Beginner's Primer to Strategy Games 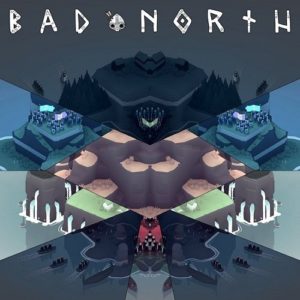 Bad North is the first project from a new developer, Plausible Concept, a team of three. But this trio is not the typical team of indie noobs. They sport resumes including the likes of LittleBigPlanet, Little Nightmares, Among the Sleep and Teslagrad—games that I actually know (and own). Combined with some Ubisoft and Unity engine experience, the team brings fans of strategy games a quality first effort.

The ESRB rating is accurate. Bad North contains blood, but due to the pixellated nature of the game, it is more of a formality than a feature that would give the squeamish pause. To put things plainly, I would allow my kids to play this if they so desired. 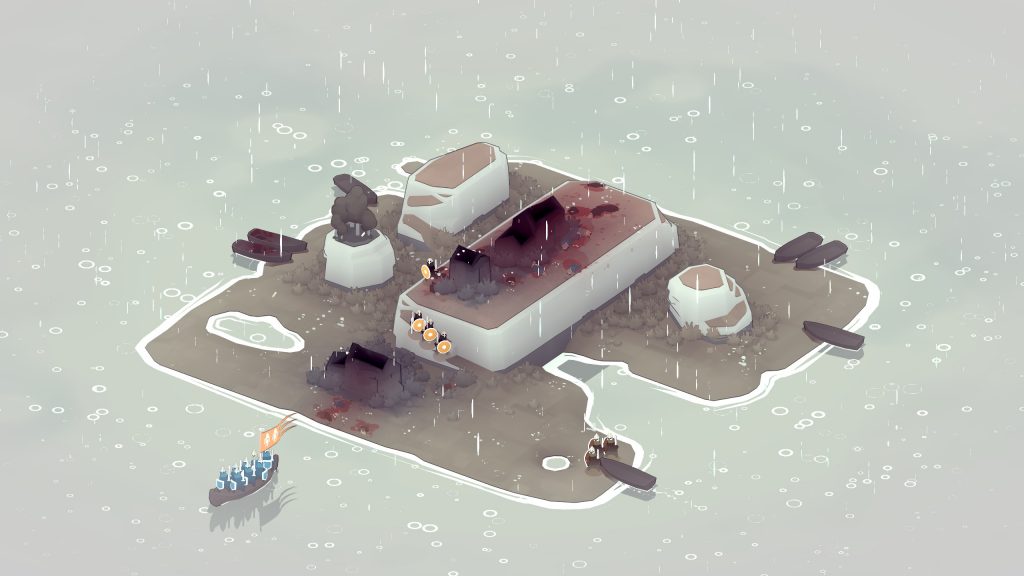 Do not mind me; I am just running away like a coward.

When Plausible Concept declares in its promotional material that Bad North is a minimalist game, they mean business. Battlefield maps maintain compact dimensions, reminding me those found in Final Fantasy Tactics. Though the color palette consists little more than the contents of a sixteen pack of crayons, the enemy and allied units alike sport distinguished characteristics. For example, there are two different types of shield-carrying enemy types that players will need to identify in a timely fashion, and I experienced no problems doing so…after, of course, the first time the yellow shield bearers threw axes to wipe out half my pikemen before a clash. The visuals that the maps provide never disinterested me for lack of colors or assets like tombs in a graveyard or the pools of blood from which the parched winter snow drinks deeply—all in minute pixels, of course. I would, however, become bored or annoyed because RNG would force me to pick among islands that are sometimes identical or difficult to defend.

Likewise, the music and ambient sounds provide pertinent though basic information. The only memorable song in this game is coincidentally the most satisfying: the victory jingle. But during battle, a horn bellows, alerting players to the incoming invasion. A foreboding, low bass note persists while war drums beat to a monotonous rhythm as ships emerge from the fog of war on their way to the chosen island. When the ships beach themselves, the clamor of battle reminds me of the nonsensical ravings of Rabbids or Minions—well, in most instances; only death cries of the occasional enemy heavy sound manly. Overall, the scale of everything is proportionate to that of ants, for I have found that optimum gameplay makes Bad North feel like an elaborate, elongated “king of the (ant) hill” mode. 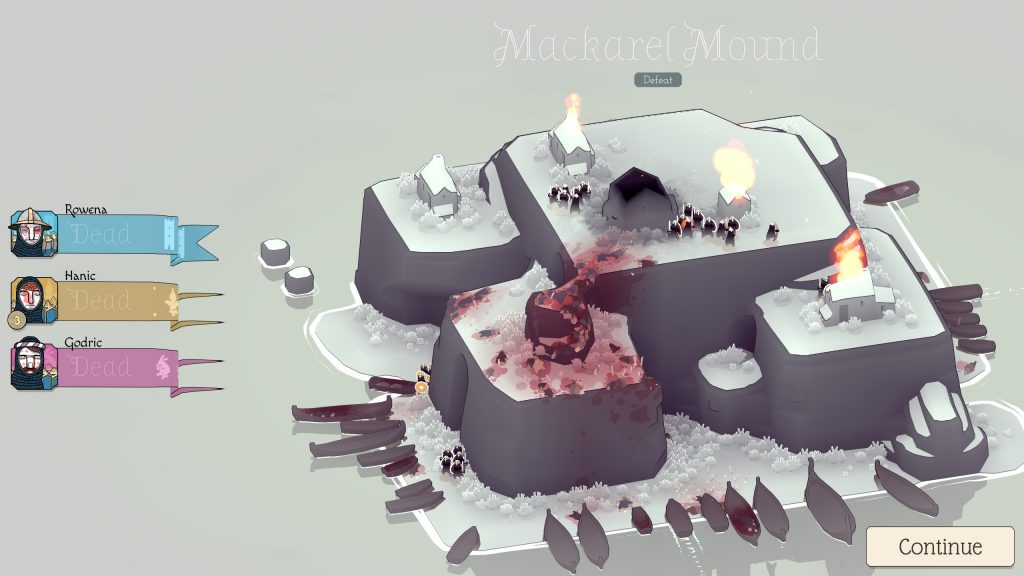 I showed up to this fight in the late-game with three generals instead of four, against at least twenty-one boats worth of foes.

A successful hold of an island requires protecting houses while repelling all conquerors to the death. Simple landmasses consist of a hill where all houses are located and there is only one on-ramp to access it. Mid to late-game maps sport the complex variety consisting of two or more ramp accesses, and/or a hovel located on the ground level, requiring a multi-pronged defense plan. Nastier maps will not only include the aforementioned, but also tunnels that behave like warp pipes in a Mario game and bodies of water from within the islands themselves. Simple as these extra wrinkles may sound, the warp tunnels are more treacherous than ramps because units disappear within them; the AI can “see” what is happening when sending a cadre though, but human players cannot; the tunnels also provide protection against archers who cannot benefit from pickoffs before clashes. The puddles (lakes?) from within islands island become deadly if they are to the backs of players “edge guarding” as enemy ships land on shore; larger ships will push troops into the water where they can drown. Certain tiles, then become too risky to defend in this manner, forcing players to give up ground. Puddles also facilitate raiding parties flanking from the left or the right for a 50/50 juke; especially irritating, they may also consist of an archer squadron that players will have to chase while suffering heavy attrition. 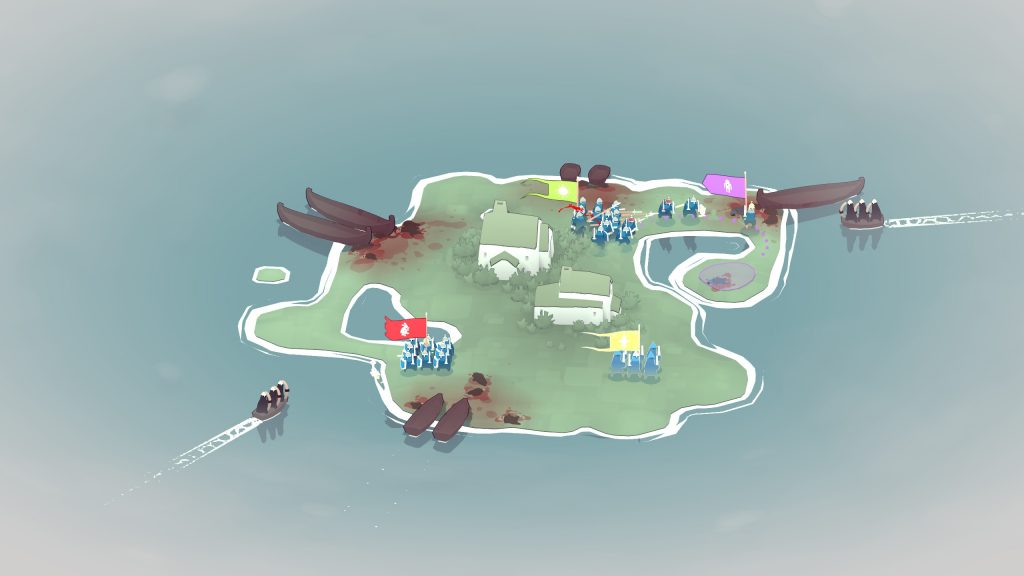 Things look great, but this is before I learned that my own troops could be pushed into the water.

It is possible to restore a platoon to full strength even after it has been whittled down to the last flag-bearing man, the general. Of course, there is risk: a squad that takes shelter in a house to replenish itself becomes unavailable for the full duration required to replace all troops even if just one is necessary. A critical error, for example, would be replenishing the archer counter, a sword and board troop, as archers approach the island. If the general falls in battle, death is permanent, so it is better to retreat into a boat that the enemy has left ashore rather than fight until the last man. After all, armies are automatically fully restored between missions. Discretion is the better part of valor and all that. 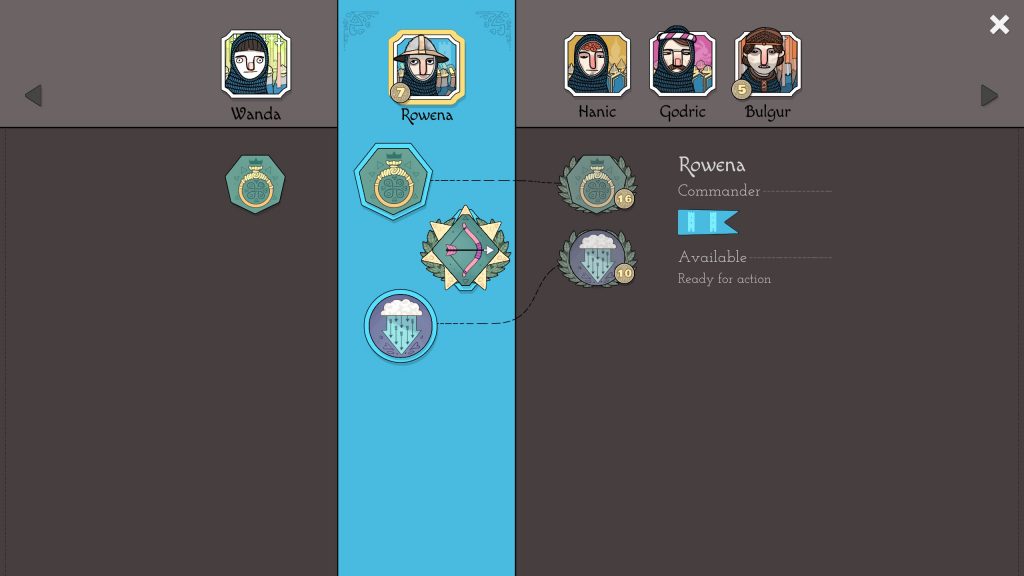 Upon victory, each house left standing from enemy (Viking) attempts to burn them down grants players up to three coins that can be allocated to a general. After accumulating a certain number of coins, the general can be promoted into the pikeman, swordsman, or archer classes from a separate menu on the map selection screen. Each class can then be upgraded two tiers, or granted a special ability that is also upgradable. Missions that host additional generals will bear his (or her) standard on the map selection screen; missions that award players special items such as an AOE damage hammer, a ring that increases the size of a base army, or a horn that allows replenishment of that squad without retreating to a house. These, too, can be upgraded, and all upgrades increase in price considerably each iteration. 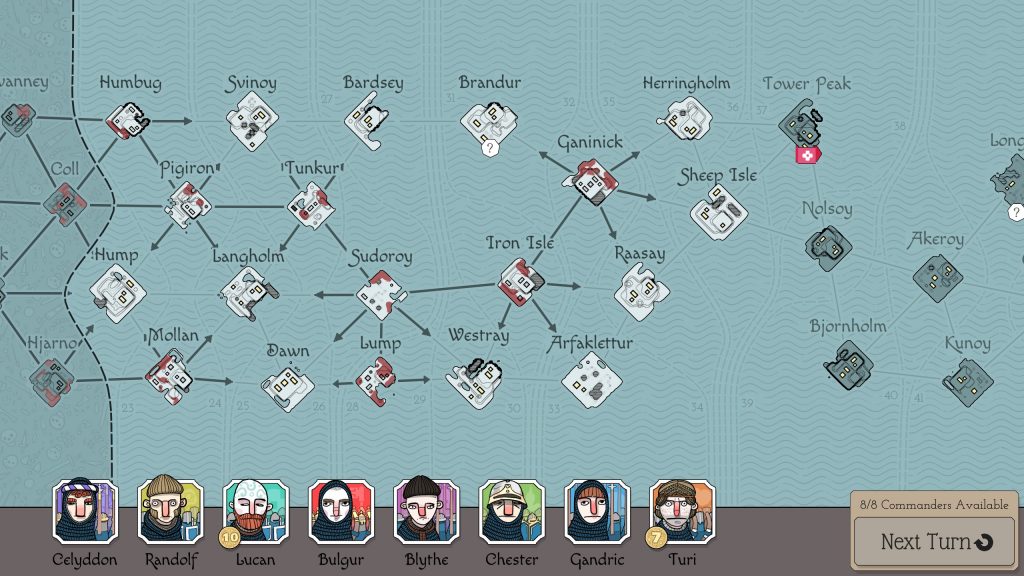 Play well, and it is possible to recruit quite the squad while raiding more than the minimum number of islands. Too bad I cannot bring along more than four generals…

Players can deploy only four squads per map, another area where Bad North favors the less-is-more approach, even though the most effective defense strategies reduces the game into a routine despite the RNG. Basic raiders pose no real threat except for sheer numbers and the potential for flanking; no squad can effectively defend its front and rear without sustaining crucial losses. Brown-shielded raiders are mostly immune to arrows, though they can succumb to a few during a clash against the player’s forces when they can no longer hold their shields high. The AI fields archers of its own, but they are more of a nuisance than a real threat—again, chasing them around with shield-bearing swordsmen as they backpaddle is the kind of misdirection that can cause severe losses.

I would not recommend two armies of archers, but this is a great illustration of the most ideal “greeting party.”

The yellow-shielded raiders behave like their brown-shielded brethren, with the exception that they throw axes from short range before a clash, and they fight with brutal fervor. This means that even if pikemen normally counter raider swordsmen, many of them still die from the initial ax throws, leaving the player’s squad weak for the next rush; if players used heir swordsmen to block axes, yellow-shields fight on par with the highest-tier swordsmen players can field. Thankfully, yellow shields are rare, because they would otherwise cause serious problems over time.

Take note as to how the spears hold to the west, but the swordsmen are outnumbered to the east.

The final tier of enemy units includes the heavies. While they enjoy impaling themselves on player spears, a single heavy will smack around any other composition like Thanos does the Avengers. The heavy also comes in the ranged variety, carrying a scorpion that can knock a shielded swordsman on his butt, or kill them outright; other player units do not stand a chance. Heavy archers like to play coy when they land ashore like standard archers, but the knockback of the scorpion can still be lethal as shield bearers get pushed into the ocean, or knocked off a cliff, separated from the safety in numbers, and is killed by a passing mob.

All of these things considered, I feel that Bad North plays less like an RTS, and more like a tower defense survival mode. Players pick his or her ideal composition, and persevere through army hordes. The problems make themselves apparent during the hard rock-paper-scissors counters. If a player moves a pikeman squad and they are waylayed before they can get into position, even basic raiders can tear through them. That kind of slaughter is typically only limited to human error, but at any point that a squad goes down, it happens faster than even an experienced strategy game player such as myself can react to, and Bad North is balanced so that such losses become precipitous. My emphasis on suffering losses is not an understatement, for losing a general can all but end a run. In this way, the game can accelerate from easy mode to harder than FTL: Faster Than Light in a flash. This would not be so bad if the early game could be paced according to the expectation of multiple runs. It is far too slow, and Bad North lacks a fast-forward button (this is the “real-time” part) to expedite beginning islands. After fighting against upwards six simultaneous armies, facing only one or two at a time for the first twenty to thirty minutes of the game is excruciating. 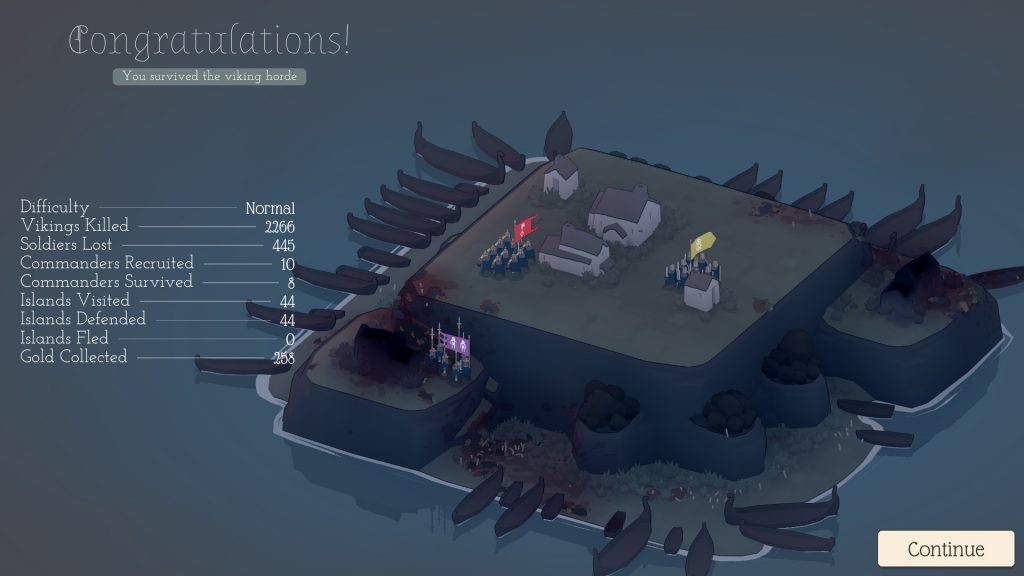 Ah, I love the smell of victory in the morning!

Those flaws aside, I do recommend Bad North, particularly to those who are new to RTS games. As it is indeed “minimalist,” its features and mechanics will not overwhelm, but force players to do more with less. Even RTS veterans will find some enjoyment out of this for a time.