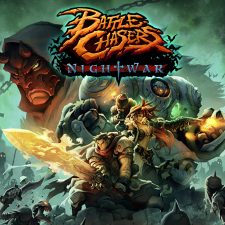 Quality turn-based RPG’s are a dime-a-dozen in today’s landscape of ever growing all-out action focused romps and out-of-control bombastic displays. In a way, developer Airship Syndicate’s Battle Chasers: Nightwar is part of a new era of RPG experimentation. Every fight is intense and success is based more on perseverance rather than skill. Battle Chasersstarted out as a comic book back in 1998 and recently, after a successful kickstarter, has finally made its way over to the video game medium with Nightwar. 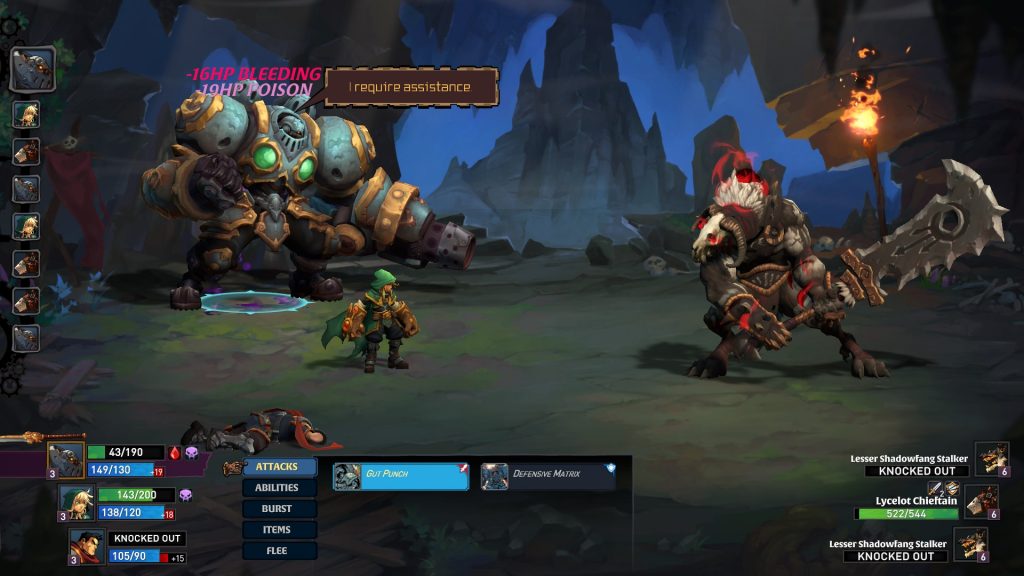 Violence: A small amount of blood can be seen from defeated enemies, but most of the action is tame in manner due to the turn-based nature of the title.

Sexual content: A few of the characters wear overly revealing clothing and some conversations contain sexual innuendo in a joking manner.

Language/crude humor: A**, d***, and h*** are used in the dialogue and some of the jokes and banter between the characters contain some crude humor regarding body parts. 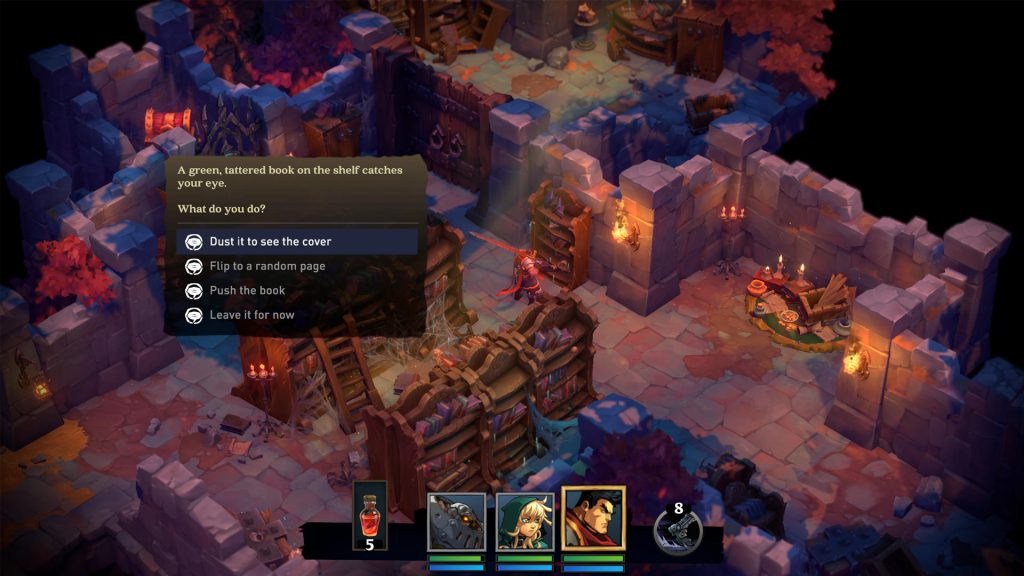 Battle Chasers: Nightwar is a mix of dungeon crawling and turn-based RPG. The story — which you don’t need to be familiar with the comics to enjoy — is about a group of fighters trying to track down and destroy an evil necromancer. There’s a bit more involved, but for the most part the story is just okay. The characters and their interactions, as well as the interesting dialogue, end up making the story intriguing enough to see through to the end.

While the story may falter, the actual gameplay on the other hand is the best part of Nightwar with its meticulous systems and dungeon exploration. The battle system is relative simple at first, but there is enough  complexity to make it all worthwhile and interesting, especially as you make it further into Nightwar unlocking new abilities and characters.

There are basically two gameplay modes while playing: the world map and the accompanying dungeons themselves. On the world map you are able to explore between the dungeons, visit towns, and travel to a few other places you need to visit. Battles are initiated by choosing an enemy on the world map and walking into them. Once you become more powerful and level up certain skills, you can actually bypass battles altogether which is a nice touch. Still, if you want to fight them you can press the action button to do so.

When it comes time to enter the dungeons you, will be able to see how difficult it will be before entering, and you can even replay the dungeon on a higher difficulty level to obtain better loot. You will also have a little randomization in dungeon layouts, meaning rooms may have the same designs and puzzles, but they will have different entrances and exits. Fortunately, this leads to the dungeons to be somewhat different each time you come back to them.

While exploring dungeons you will have plenty of loot to gather and you are able to actually see the enemies walking in the environment. This can help you strategize for each encounter more thoroughly depending on the type of enemy. The dungeons themselves involve some basic puzzle solving and traps to evade;  secret areas featuring certain rare loot and items you may need are scattered about . The ultimate goal, though, is to eventually make it to the end of a dungeon and face the boss to obtain a key story item. 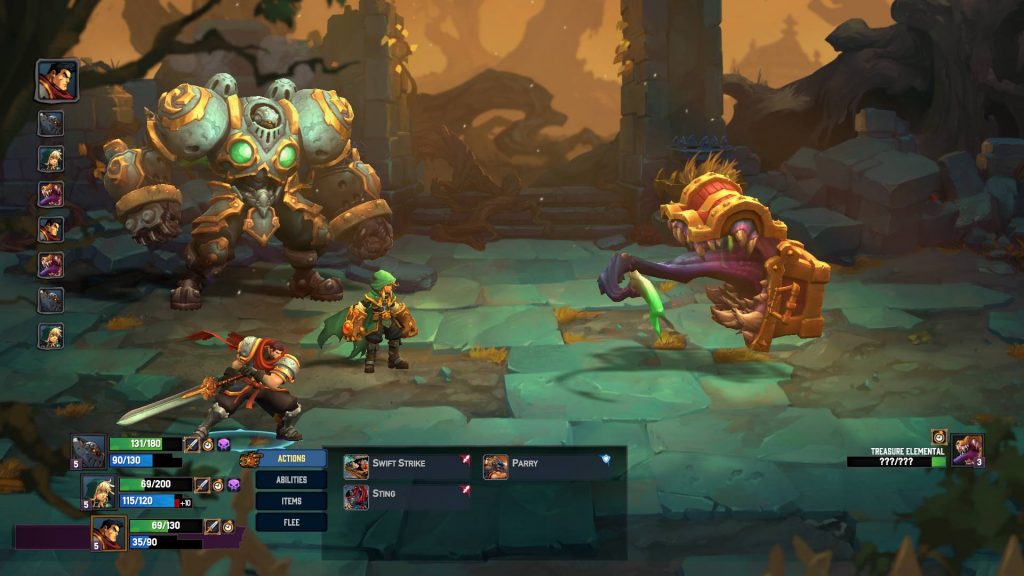 The battle system consists of your party of up to three warriors facing off against an enemy force of up to three as well. There are many different abilities and buffs you may use during the course of battle to turn the tide in your favor. You have standard abilities which won’t cost any mana, but they aren’t just straight up attacks. Sometimes they may have certain abilities attached to them, possible debuff and buffs, and other abilities for defense attack power for a unit.

You also have abilities that cost mana in order to use, and there is a multitude of different ones for each character in your party. On top of this, you also have burst abilities which are basically like a Limit Break attack from your favorite Final Fantasy title. This gauge will fill up as you take or give damage and these are very powerful moves. You only have one burst meter for your entire party so it’s important to decide who to use it against and for what purpose.

As you win battles, you will gain experience which allows you to level up characters and increase burst points. Each character has a unique list of perks, and what’s neat about the Battlechasers system is that  you will never have to worry about getting stuck with the wrong ability  as you can unequip certain perks for better ones you may unlock further into the game. You have a limited number of perk points you are able to use, meaning it’s important to choose wisely what perks and abilities will assist you the most. These usually include small bonuses such as increasing your offense or defense, increasing your health and attack, or increasing the ability of a certain spell for a character you’re currently using.

Along with the main quest, there are many side-quests to complete, including a fishing mini-game to snag some of the best food items, and special hunts where you can track down certain enemies. The variety with the many different gameplay systems is impressive and rarely lingers past the point of fatigue.

Nightwars unfortunately did crash on me a few times, but it was never a problem as I was usually not far from where the autosave picked me up. There was noticeable slowdown, occasionally occurring while jumping from scenes or if there were many particle effects while in a battle. Also, the load times are egregious between dungeons and even certain battles took exceptionally long before they eventually started up.

Overall, Battle Chasers: Nightwars is a solid dungeon crawling, turn-based RPG that is definitely for fans of the comic, and even good enough for those who have no clue what it is. For fans of the RPG genre, you will most likely get enough from the length and nuances in combat to appreciate what makes Nightwars work. While the story is merely a means to an end, the characters themselves are done exceptionally well, and the interactions really make you care for them. I also enjoyed going back through dungeons to get better loot.

Battle Chasers: Nightwar is a solid turn-based RPG with great gameplay mechanics and intriguing characters. The art style in the actual game and cutscenes are excellent, and the rewarding dungeon exploration is always fun. While the technical issues and boring story detract from the experience, Nightwars is still an easy RPG experience to recommend.