Review – Before I Forget

A Game of Moments to Remember 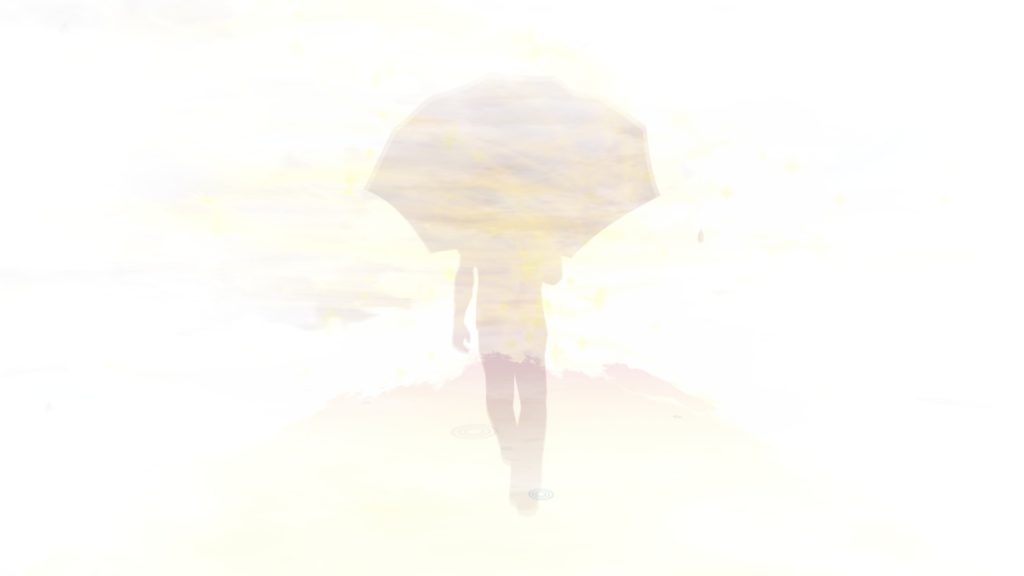 I’ve come across many games in my lifetime that I consider to be short, from the smallest indies to largest AAA titles. Before I Forget is a blatantly brief game on that spectrum, yet that is what intrigued me about it. The way I read the game’s preview, it sounded like it was designed only to be approximately an hour long. Would the story be strong enough to wow me in just one hour of playtime? Let’s find out.

Unsettling Imagery: The course of the game plays through the mind of a woman struggling from mental illness. There are some unsettling scenes which relay her anxiety to the player.

Upon starting Before I Forget, I wake up in a plain white house. Control prompts appear on screen, letting me know how to move and observe things. I am then left me to wander in search of whatever the controlled character, Sunita, announces she is looking for. Whenever I found something I could pick up and look at, a white border would appear around the item. Then Sunita would enter a flashback and recall what was special about the item, or what memories were associated with it. However, it doesn’t take long to start noticing that something isn’t quite right—the house is empty, and there’s no one here besides myself. What’s going on? 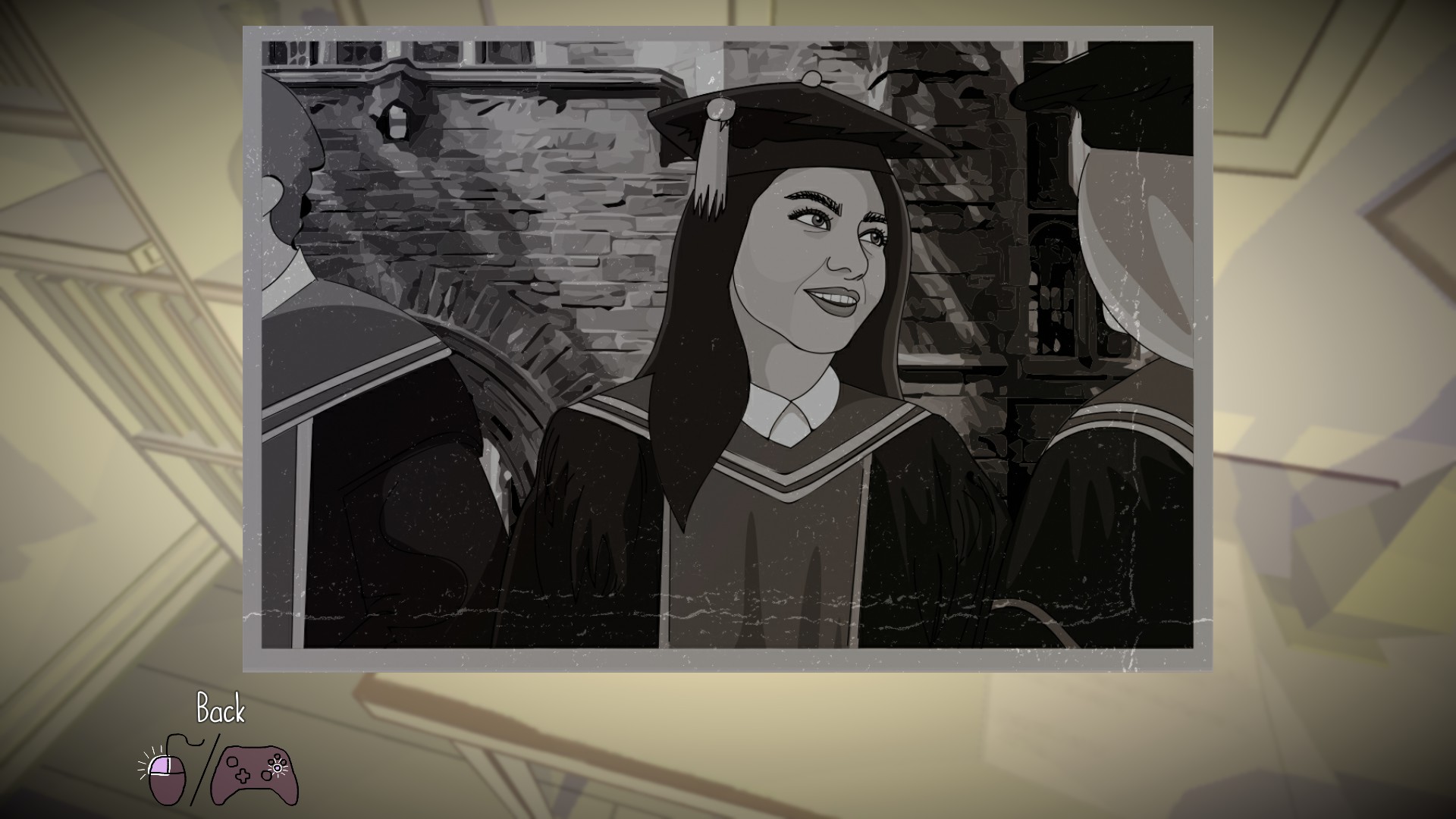 Ah, yes. The time I graduated from that place in that year. I remember perfectly!

While Sunita is the only character who you really see interact with anything in the game, Dylan is the other main character in Before I Forget’s plot. He is also the perspective from whom the player sees what affects Sunita. No matter where you go, Sunita is always looking for Dylan, and can’t find him anywhere. Where is he? The house is so lonely without him. Why isn’t he eating any of his peaches I bought him? Why would he leave me a cheese sandwich? Did he forget I don’t like cheese? 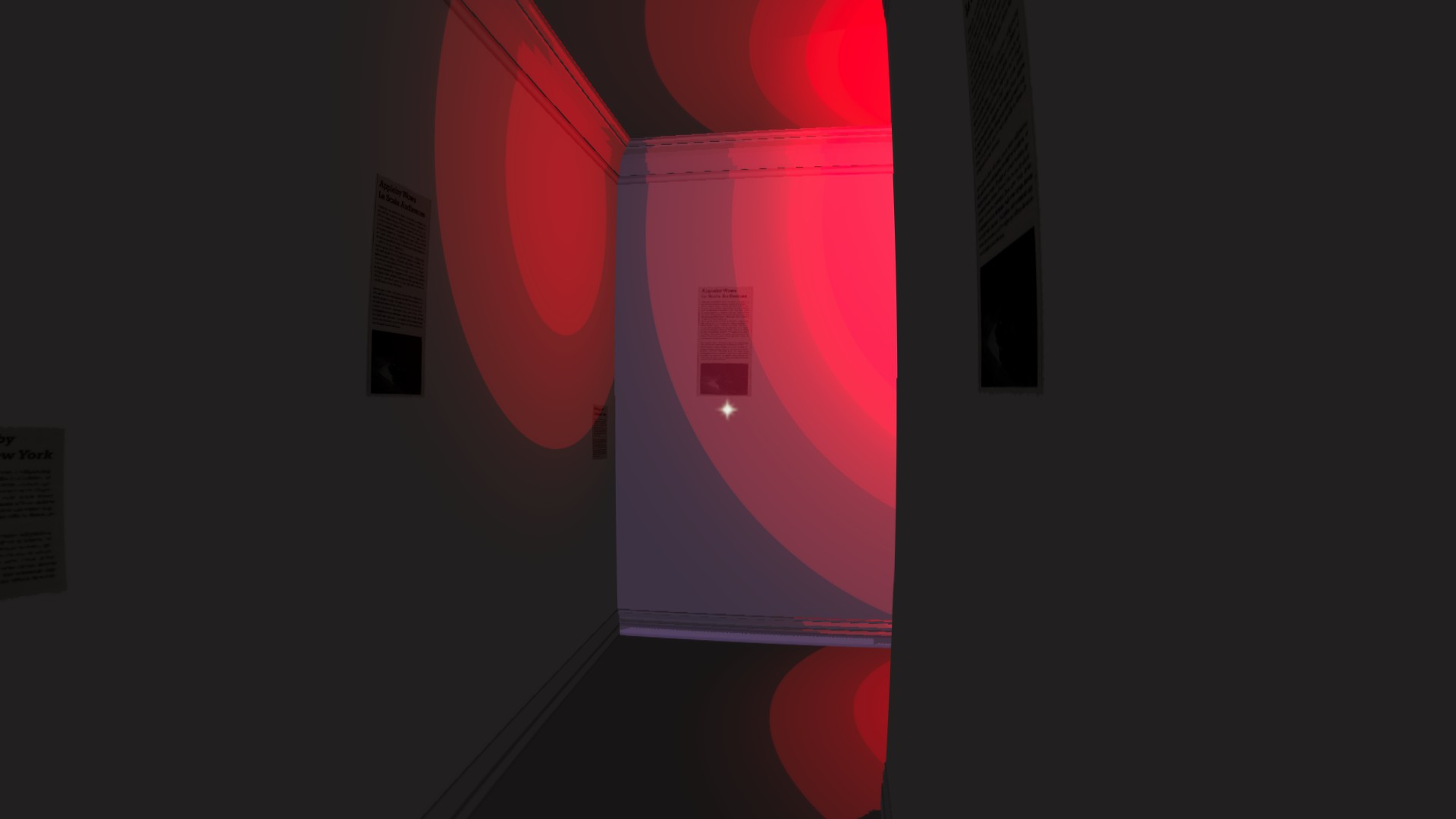 When the light fades away, the house becomes very eerie indeed.

Most of Before I Forget is calm. You just walk from room to room, reminiscing objects within the house, and picking up clues as to what troubles Sunita. However, one moment is far from calm, and that is when Sunita needs to find the restroom. In other circumstances, this could seem comical. However, when watching through Sunita’s eyes, it isn’t funny. It’s terrifying. I can’t find the bathroom in my own house!

Upon the realization that she needs to find the bathroom, the once-bright house loses all of its light, replaced by eerie red lights and shadows. All doors are closed. I need to get to the restroom, but I can’t remember where it is. Each door only seems to lead to the same place. I keep finding myself in the closet. There’s a huge hole swirling in the floor that didn’t used to be there. Eventually, finally, the screen goes to black, as Sunita gives in to her anxiety. I never found the restroom until the next morning.

What Does It Mean? 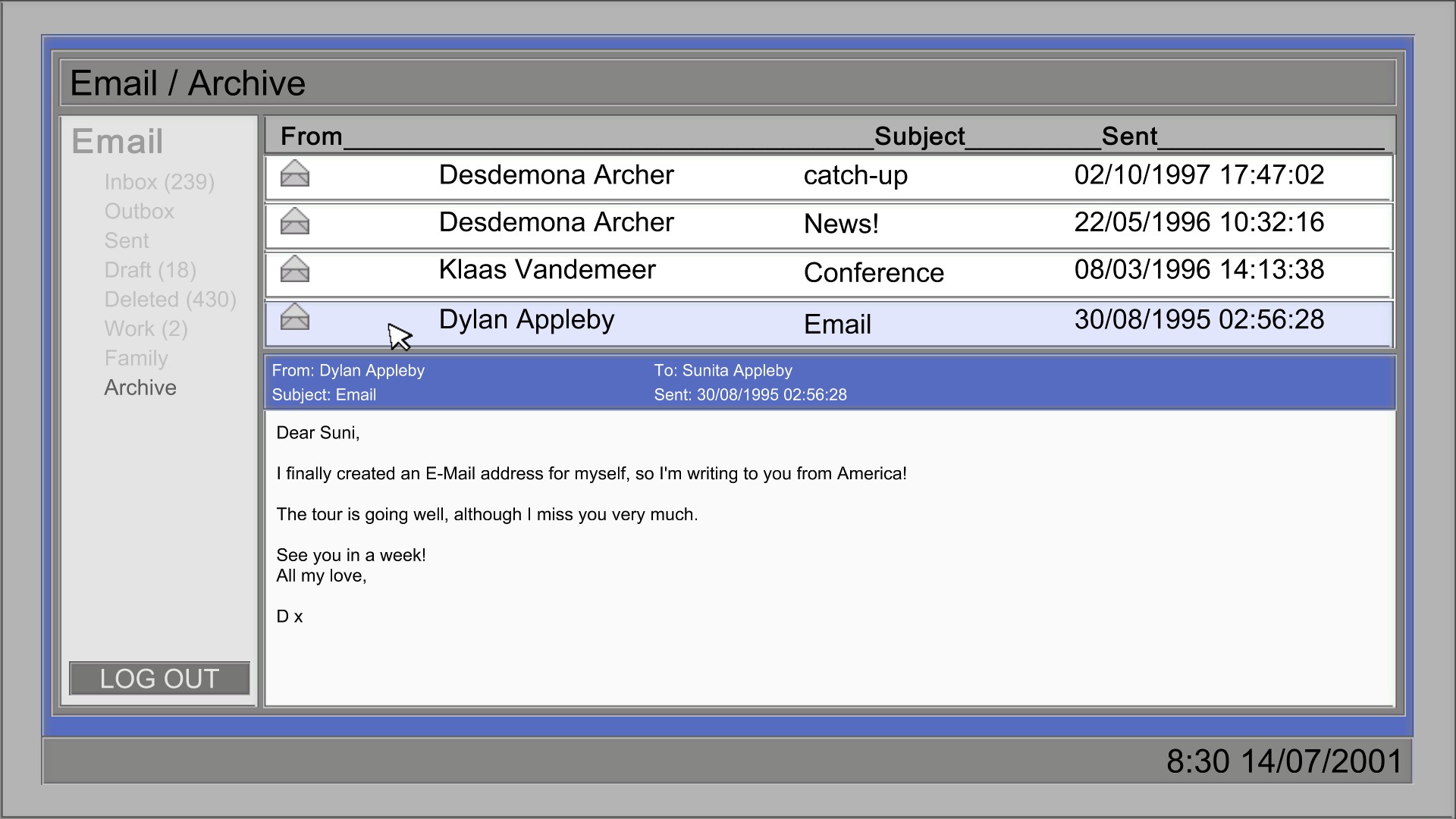 These “emails” are older than I am. Yikes!

The premise of Before I Forget is to find and reminisce about as many items as possible. Some items’ memories are more powerful than others, such as the telescope, which brings Sunita memories of when she was a little girl. In these stronger memories, I was directed to find star constellations in the sky and on charts. It was really neat to experience these, as it made connections to real-world constellations and locations. Although not as special, it was also sweet to open up drawers and find birthday cards, or see anniversary cards here and there in a lounge. Though only within the space of an hour, I felt like I was genuinely getting to know Sunita and the happy life she was living with Dylan. However, everything stopped coming around the year 1996. What happened?

I found the answer via email. When I had checked into the seemingly-ancient 2001 email setup, I found that Sunita had some sort of accident at a conference several years before the game took place. Despite being a prodigy in her field, she retired early. Why?

Upon the “first” big reveal, Sunita understandably freaks out. I’m thrown in a chase scene, running through another black-and-red corridor before remembering Sunita’s latest memory with Dylan, and finding peace. Then the credits roll. 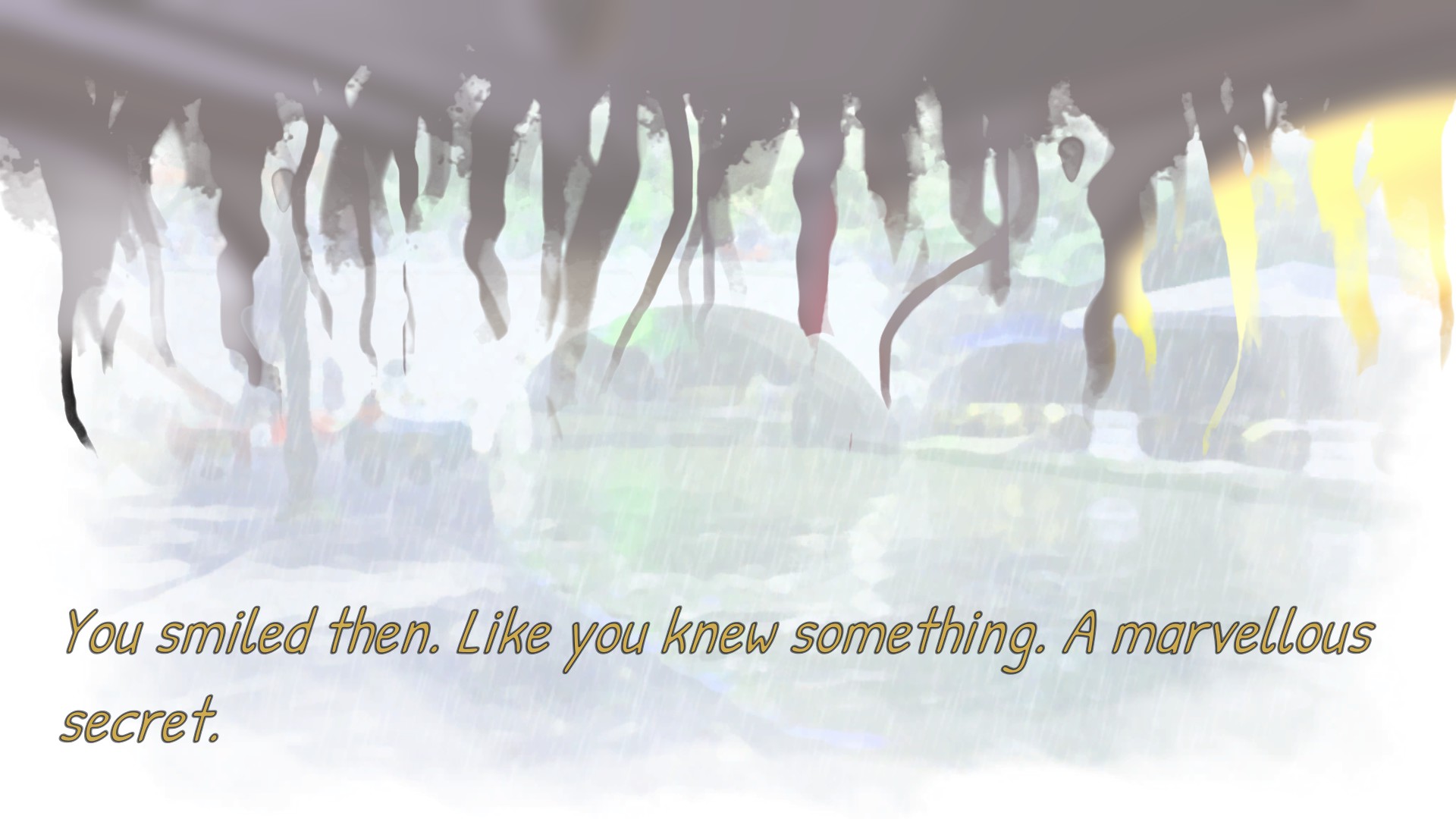 Some memories, like this one, fade to black from the tendrils to the top, to the bottom. I think that’s meant to be symbolic?

While I’m not sure exactly what the extent or root-cause of Sunita’s [mental breakdown] is, according to the story, it is worth noting the uniqueness of a game exploring its effects. While games such as Celeste and Hellblade: Senua’s Sacrifice excel at representing other mental-health issues, Before I Forget is the first I know to talk about [this one]. Due to the augmented terror, and sadness, I have increased in my empathy for those suffering from this illness. If that was 3-Fold Game’s objective, then I would venture to declare their mission a success. Those who suffer from memory-loss related illness, or love someone who does, have my deepest sympathies. My heart goes out to them.

In the beginning of the review, I asked if this hour-long game could be moving enough to impress me with it’s short time span. That answer is yes. Leaving this game behind, I now feel like I have an experience which has made me a better person. I’m not saying that everyone should drop their things to play Before I Forget. But if you do, it’s possible that you’ll be a better person for it. 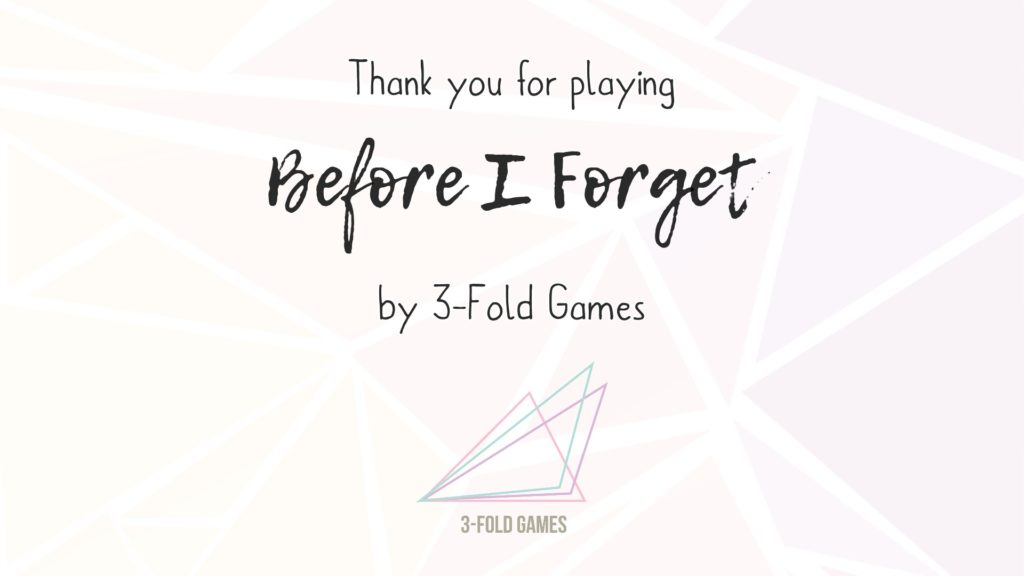 And thank you for the experience, 3-Fold. Best of luck in your future endeavors!

Although very short, Before I Forget’s emotional highs and lows are enough to make any player care for Sunita, and feel the plight of those who suffer like her.