The people of the city of Grant, under threat of attack from surrounding nations, made a deal with a dangerous alchemist named Mephisto, who then shrouded the nation with a deadly fog and delivered the antidote to the citizens. Something went wrong, however; the antidote ran out, and those unable to flee the city or find shelter within began to lose their minds in the fog and form a cult around the alchemist. Now you, a mercenary, have been hired by the king to lead a team into Grant, root out the source of the fog, and save those still trapped within its walls.

Such is the premise of Black Legend, the new turn-based strategy game from developer Warcave, and it’s a promising premise at that. But does this dark and gritty game live up to its potential? 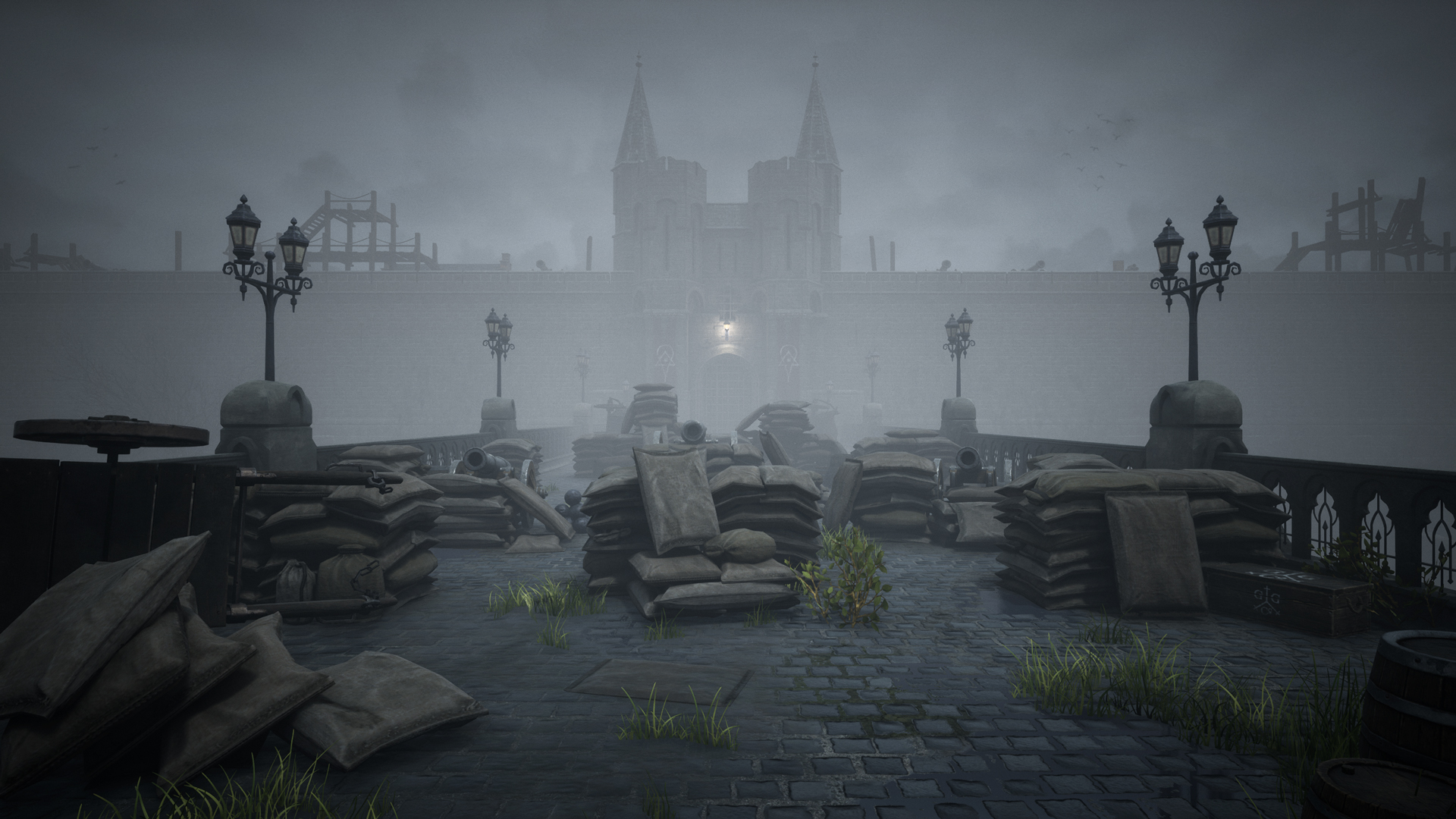 Spiritual content: Some mystical, vaguely spiritual elements appear within the game, such as how nailing a bloody coin to a tree will restore your party’s health. The pseudo-magic/science practice of alchemy plays a significant role within the game and is frequently mentioned NPCs as well as practiced by the player character. A group of cultists serves as your primary foes throughout the game, though their behavior has as much to do with being driven made by alchemical machinations as by religious devotion.

Language: Occasional strong language, such “s***e” (yes, with an “e” at the end, because the characters are all quite British in their manner of speaking) is uttered over the course of the game.

Alcohol: One of the abilities you can perform during combat is to take a swig of alcohol to boost one of your stats. 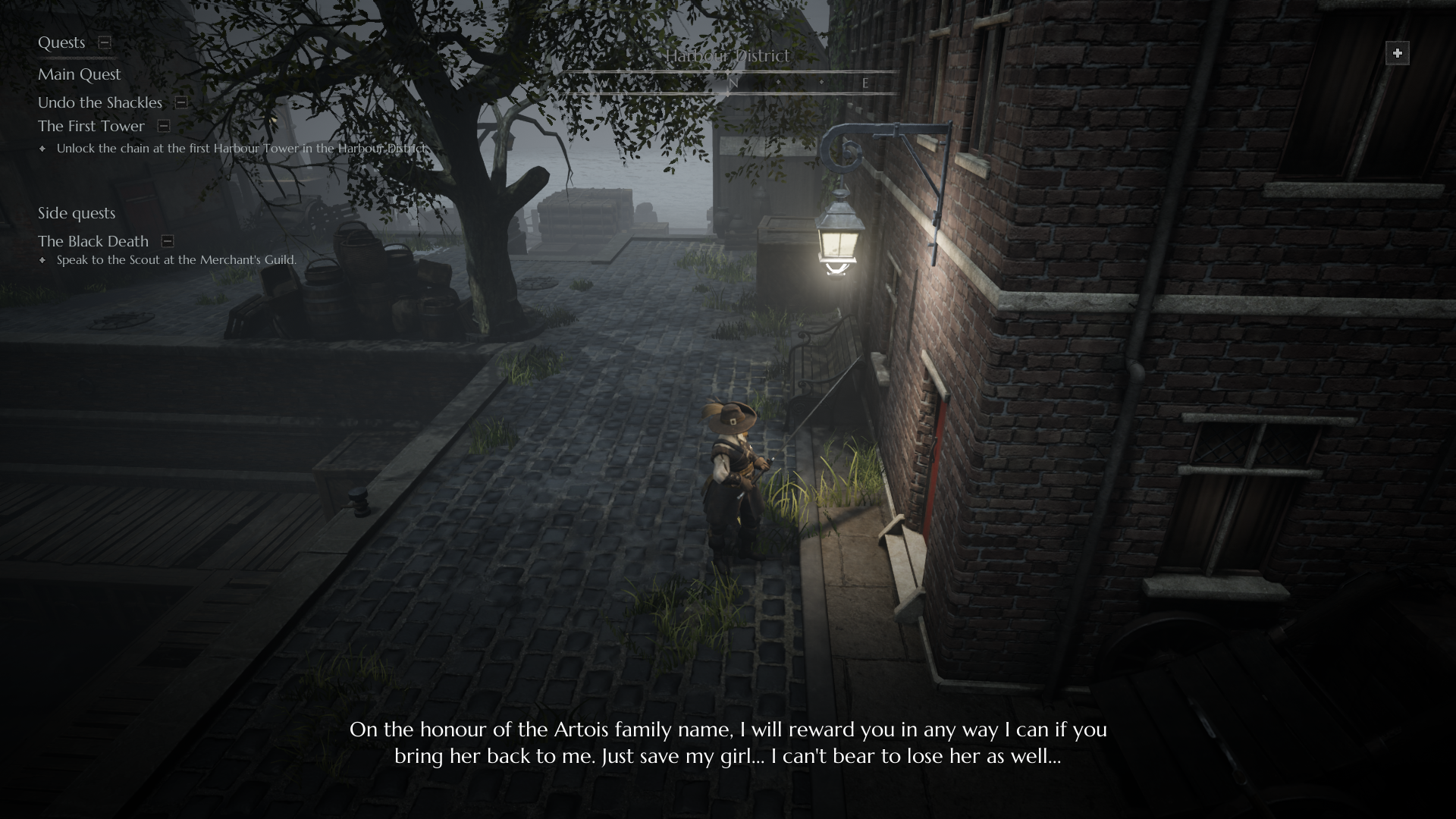 While the game’s aforementioned premise introduces the potential for an intriguing setting and narrative, that potential is sadly squandered, as Black Legend’s story is merely set dressing for the gameplay. NPCs exhibit little in the way of character aside from grimly fretting over their miserable circumstances, and the player characters lack any sort of dialogue or expressions at all; you and your team are mindless fodder thrown at the hordes of cultists in the hope that maybe this group won’t fail where countless others have. The plot is no better, as most of your main quests turn out to be fetch quests and an occasional interaction with an NPC or two.

It doesn’t help that the city’s various districts all feel the same, sporting the same cobblestone streets and the same tall brick buildings, all shrouded in the same gloomy fog. A dark, dreary atmosphere is not a bad thing in and of itself, of course—games like Dark Souls and Bloodborne prove that. But Black Legend’s environments don’t evolve in any meaningful way during the game. Between the drab grays dominating the color palette and the distinct lack of architectural variety, no area is memorable, and the districts blur together in my mind. 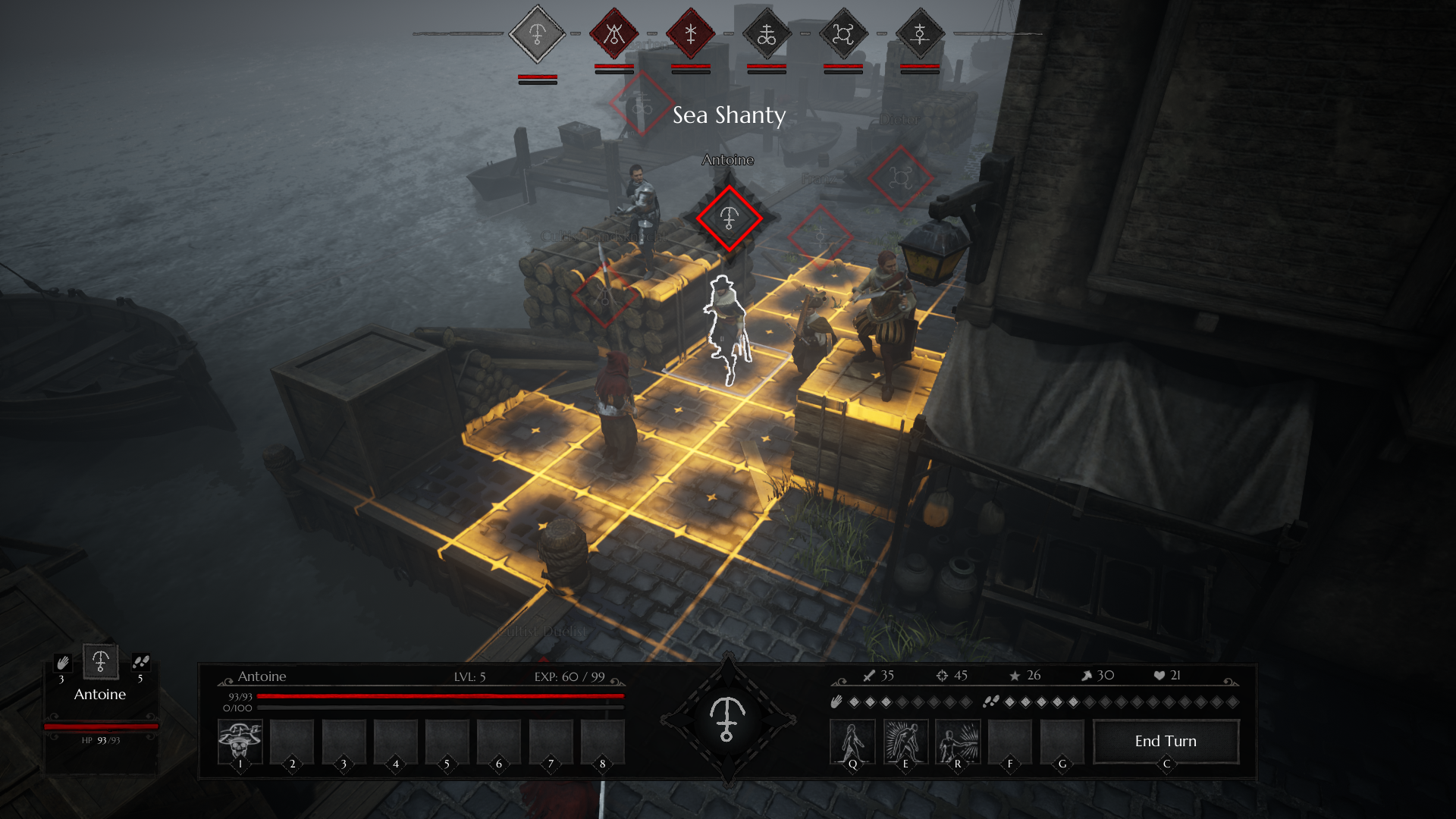 Black Legend’s combat, on the other hand, is a different story…to a degree. The turn-based gameplay is built around a so-called “alchemy” mechanic, in which different attacks create stacks of “humours” on the target. There are four different color-coded humours that can be stacked on a combatant, and once you hit them with a “catalyzing” attack those humours will combine with one another to do increased damage. As you advance through the game, you unlock more character classes, each with their own sets of attacks that stack humours on opponents and which provide other distinct advantages, such as slowing down an enemy’s movement, hitting multiple enemies at the same time (and your own party members if you’re not careful), or targeting from very long range. This system encourages you to try out new classes, as you can swap between them at any time outside of combat and lets you use abilities from outside your current class, and I appreciate the flexibility and experimentation that this allows.

However, while the combat incentives experimentation, it lacks the depth necessary to keep the experience entertaining. Once you learn the alchemy system during the game’s tutorial, you’ve learned the bulk of the game’s strategy, and there is little left for you to discover throughout the rest of the game. Sure, you get a touch more variety over time—the initial classes only provide basic offensive attacks, while later classes introduce moves with other functions, such as party buffs—but the basic strategy remains the same: stack humours, catalyze for massive damage, rinse and repeat. 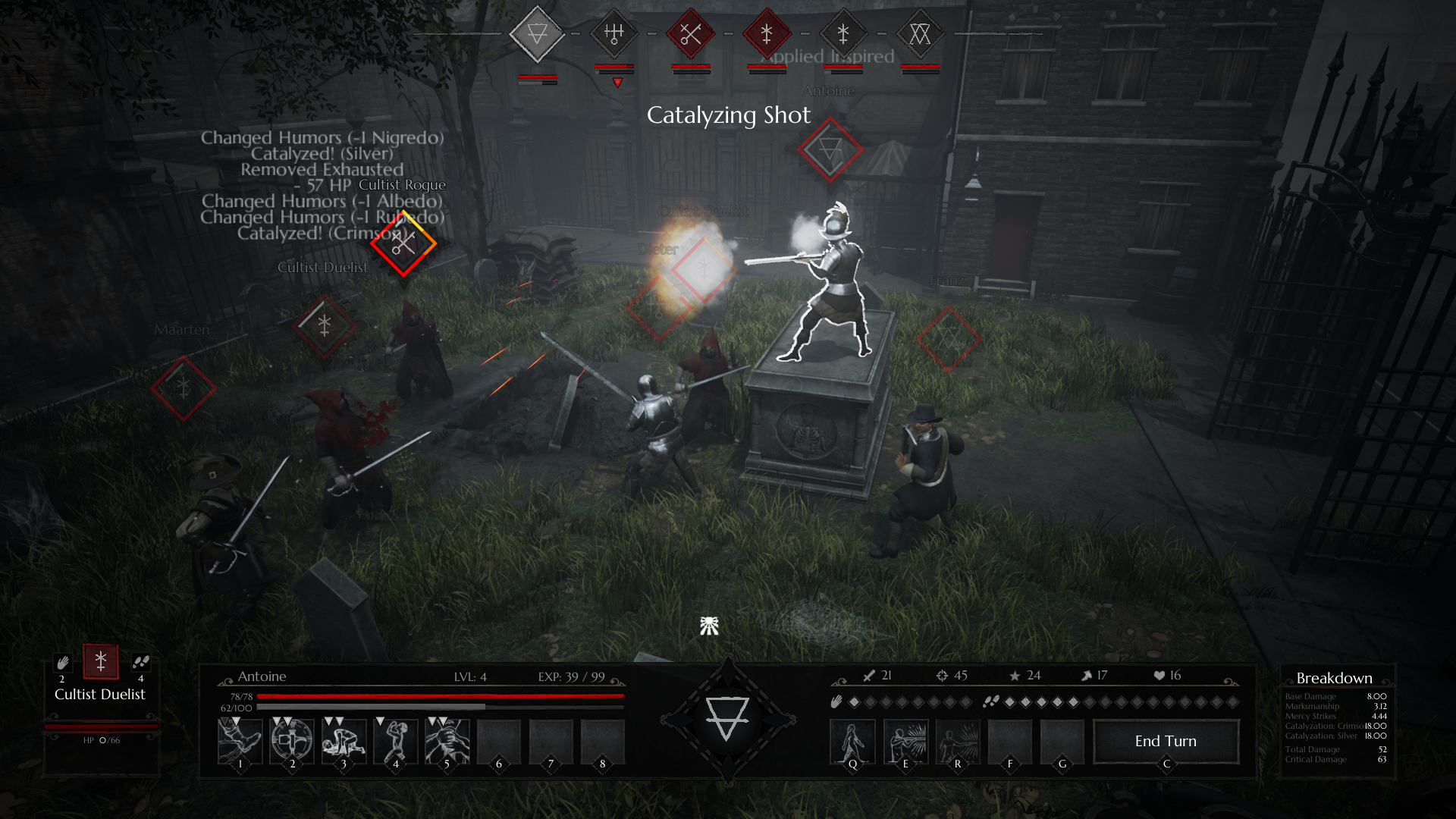 Furthermore, the party members are all blank slates upon which you can build any sort of fighter based on the attacks they learn from different classes. While those playing in permadeath mode will appreciate this feature since they can rebuild any type of fighter they may lose in battle with new recruits found in the city, those playing in normal mode never have any reason to swap out the characters in their party. Why bother switching to an undeveloped rookie when you can just keep building the veteran you got at the beginning of the game, especially since none of these characters exhibit distinct personalities anyway?

In every respect, Black Legend is a mile wide and an inch deep. It builds a dark, moody aesthetic, but fails to create enough visual variety to stimulate the senses for long. It sets up a mysterious world ripe for storytelling, but then inhabits that world with lifeless, forgettable characters and boring fetch quests. It delivers a combat system that encourages you to experiment with your party and customize it to your liking, but which lacks the strategic depth needed to make any of the customization meaningful. The game simply does not develop any of its concepts to the extent needed to create an engaging experience. Those looking for a new strategy game to dive into should look elsewhere. 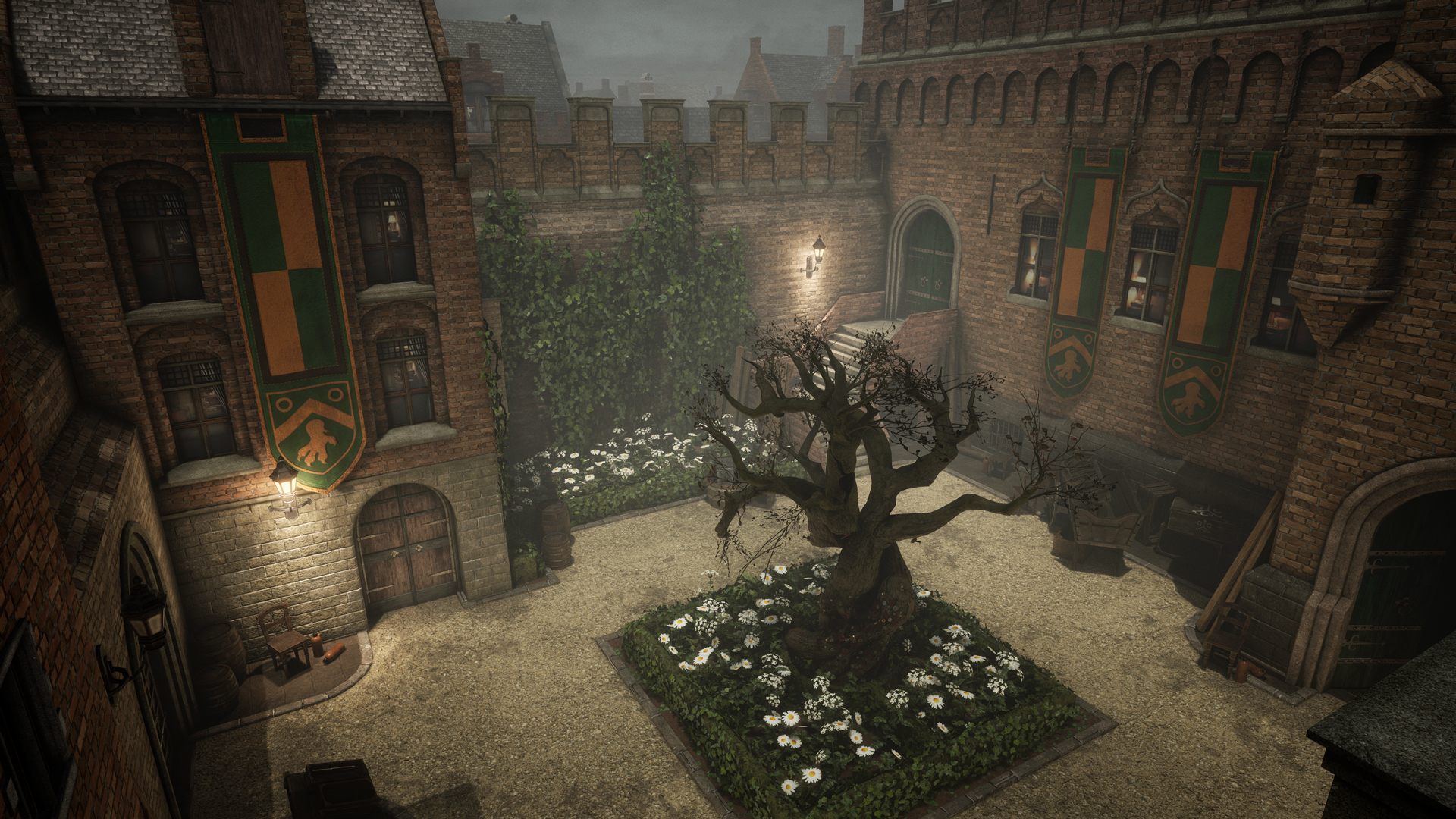 Black Legend introduces some neat concepts, but lacks the depth needed to create an engaging experience.