Black Mirror (2017) is a remake of its original release that came out in 2003. It follows the adventure of a young man who goes to his Scottish home in the 1920s. Unknown to him at the time, however, is that there’s a dark curse on the estate and his family. As he explores the mansion, he uncovers likewise dark family secrets and hidden history. Desperate not to end up like his father, he works to end the hex around his house.

This game deals with curses and dark spirits. Most of the spiritual elements in the game, especially the ones antagonizing the cast, are druidic in origin, and one of the characters in the game states this himself. The main character can also see the ghosts of people who’ve died, and interacts with them to solve the mystery.

There are several murders committed in this game, most of them done with realism and shown up close.

The point of the game is to end the evil that has been traveling through the hero’s family for generations, and arguably, a rejection of pagan magic.

I know what you’re thinking, so no, this has nothing to do with Black Mirror on Netflix. It took me about 20 minutes of gameplay and not so much as a light bulb until I figured that out. Black Mirror (2017) is actually a remake of The Black Mirror (2003). This game has less to do with the effect of technology and more to do with ancient Gaelic curses. I haven’t played the original, and therefore, can only judge this remake based upon its modern merits–now how how it compares to the original.

With that aside, Black Mirror is an alright game with a good story and several features that make playing it less than fun. The game focuses on David Gordon, a young man who travels to his ancestral home after his father’s mysterious death. David’s personality is contradictory at times, being polite and discretionary at one moment and losing all tact the next, but overall, he serves as a good hero for the game. His motivations are clear and he acts in such a way as to achieve his ends. I wish the rest of the cast was the same. I didn’t bother learning all the characters names, because they were all broadly drawn stereotypes. There is the old duchess, the prim and proper butler, the creepy groundskeeper, and the naive maid. This makes Black Mirror feel less like a horror adventure and more like playing a game of Clue. 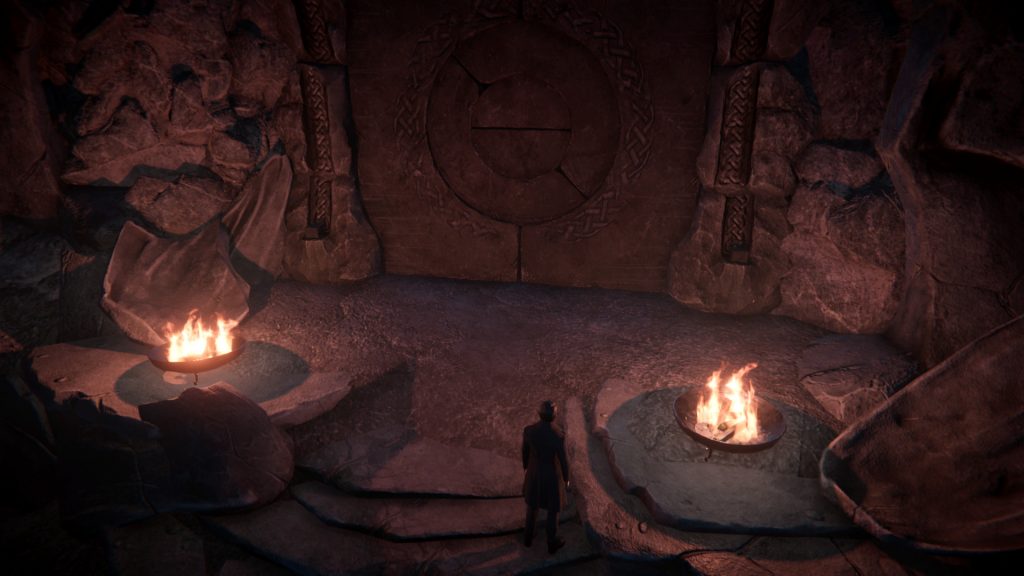 My guess what’s behind this door? Cursed pirate treasure.

Gordon is told that his family has been cursed. Gordons from him to his father going back to at least the 1400s are afflicted with a terrible darkness. Black Mirror never really shows what kind of curse it is or how it affects the Gordons. All the game really tells you is that hundreds of years ago, the House of Gordon made a deal with the local Scottish Druids, and as a result, every Gordon has a price to pay.

At the heart of Black Mirror is a mystery, and in this case, the game is successful. There are a few twists and turns that keep the plot interesting and varied, and though the gameplay is lacking, the developments are enough to keep playing. The supporting cast is bland, but the story uses them well and knows how to make them effective and serve the plot. The one exception is the female lead, who is proactive, smart, and actually has a pivotal role in the proceedings. If you’re looking for a game with a strong female lead, surprisingly Black Mirror is a good choice of game.

What doesn’t serve the plot is the gameplay. I had trouble with exploration. Controlling David Gordon is awkward. It almost feels like controlling a tank because he often turns and moves in separate actions. Finding objects isn’t easy because David often has to be standing directly in front of said objects to interact with them, which is already hard enough with the poor controls. 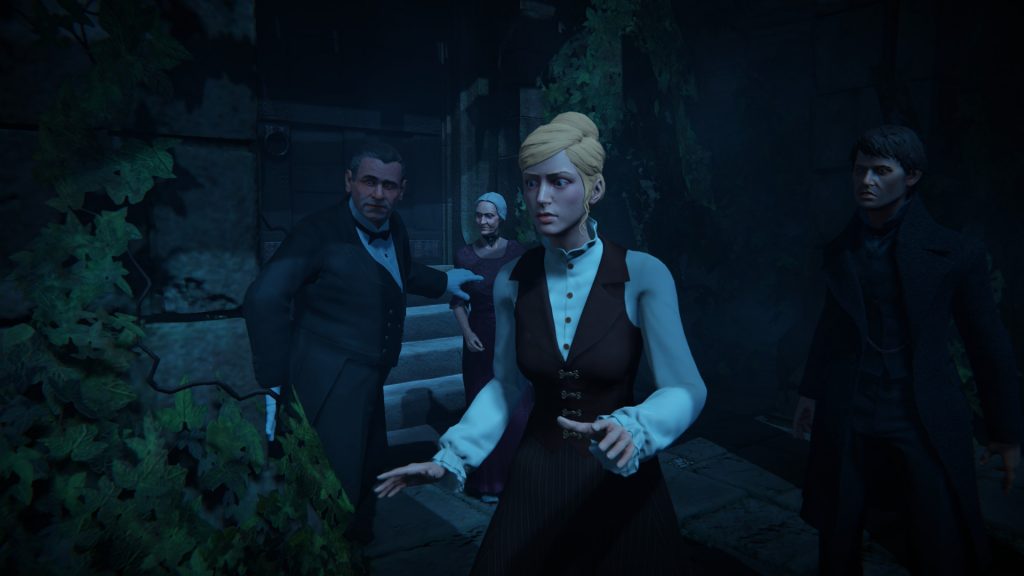 Seriously, she needs her own game! Give it to her now!

There’s a little bit of a puzzle element to this game. In order to progress in the story, David has to pick a lock or open a door, and a lot of these are logic based. The puzzles are tough, but fair, and give you all the knowledge needed to solve them, as compared to traveling. In this way, the puzzle element of this game is more rewarding than the exploration, and as a result more fun. It is one of the best parts of Black Mirror.

For a horror game like this, atmosphere is everything, and Black Mirror gets this mostly right. The game looks great, From the creepy old manor house to the green but sinister garden, things look foreboding and sinister. The huge fatal flaw that keeps this game from being truly scary is the animation. The character animations are off, and not in a terrifying way way. The dialogue is voice acted and actually pretty good, but when the people speak like puppets, with very little variation in facial expressions, it makes the whole thing seem ridiculous. The ending is especially bad with this, as the game’s antagonist does something so wacky and out of left field, it completely blows apart the atmosphere of dread Black Mirror tries to inspire. 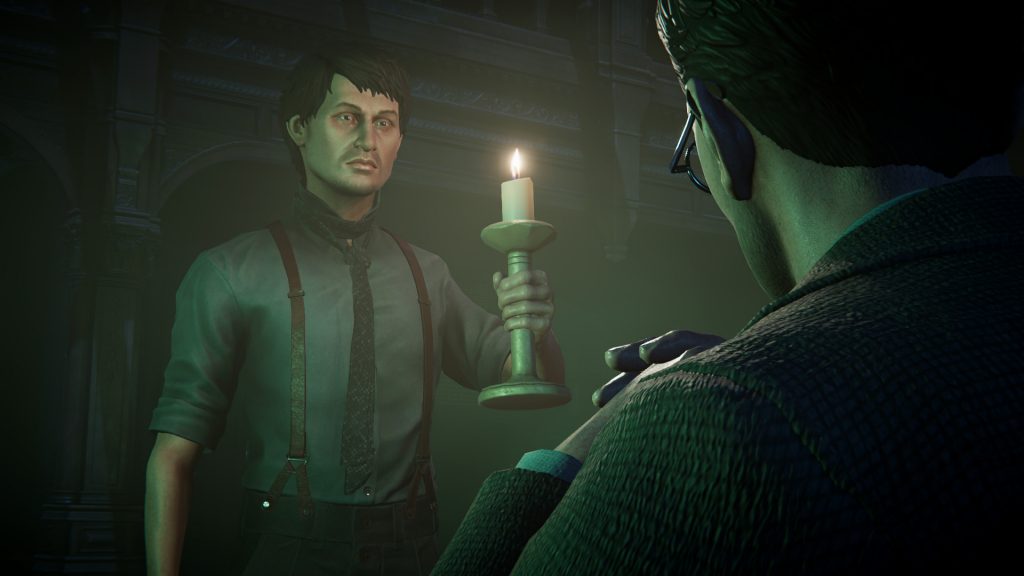 Is he supposed to be happy? Scared? Angry?

Black Mirror stands on its own, but it’s a shaky foundation. It’s worth playing for the story if you have time dedicated to run back and forth between locations; it includes just enough interesting things to keep you playing. The load times, while annoying, are worth the wait. If you’re looking for a game to send a chill up your spine as you solve a mystery, the weird character animations will probably ruin things, but if you have a craving for 20th century gothic pieces, and are prepared not to take it too seriously, Black Mirror is worth checking out.

Black Mirror is serviceable with fun gameplay elements and an engaging mystery at the center of it all, but the exploration and animation keeps this game from being great.