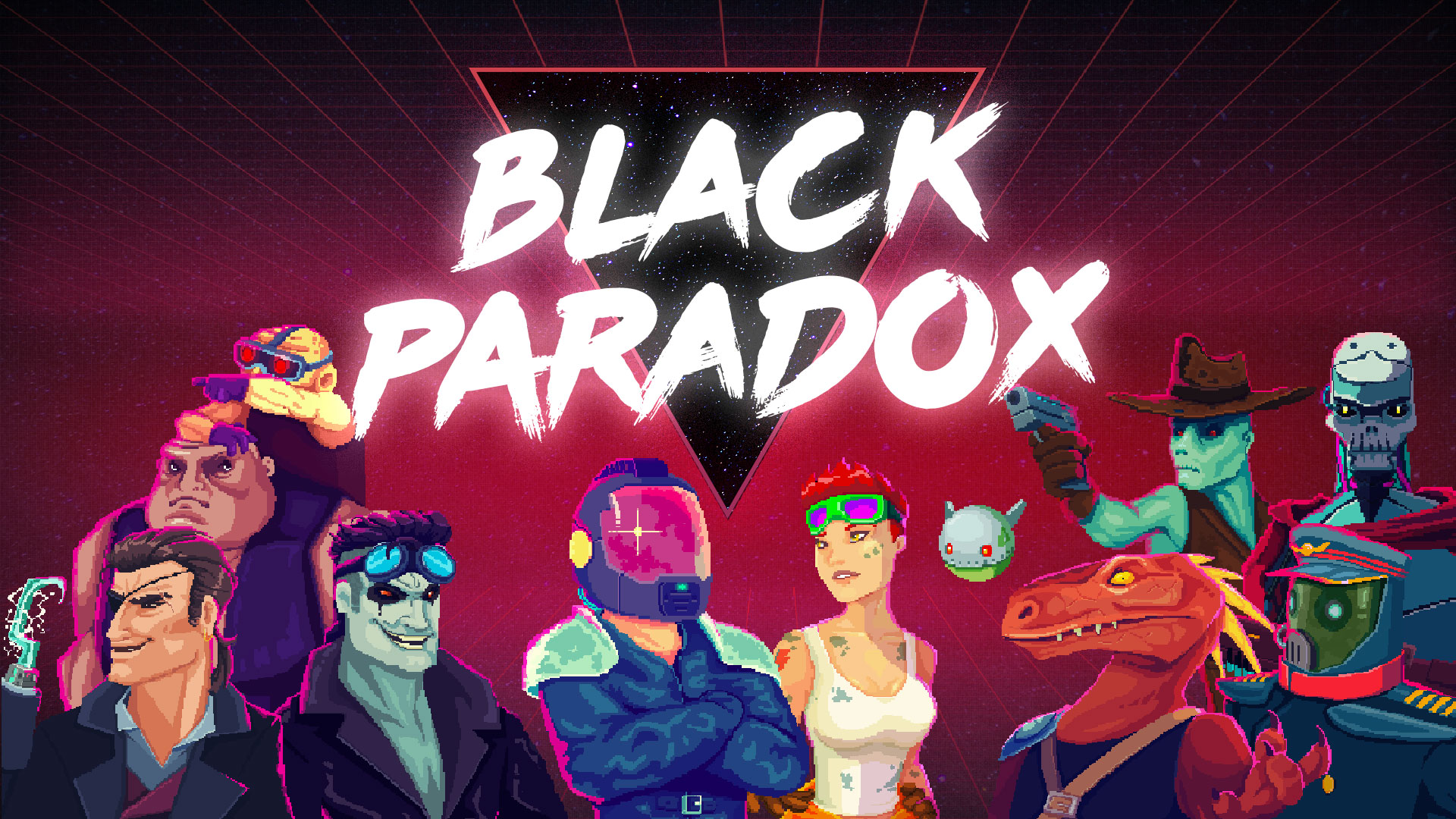 Though we published a preview of Black Paradox on August 28, 2018, our policy here at Geeks Under Grace is that we do not review games until they have exited Early Access. Yet it officially launched out of Steam Early Access on May 2, 2019, so I am a little behind the ball with my follow-up. In my defense, the game did not change significantly from the build I played almost two years ago.

As the PEGI 7 rating indicates, this is a game that is appropriate for all ages.

As I indicate in the introduction, the challenge of writing a review for a game like Black Paradox is that not much has changed over time. Its highlights still consist of a retro 80’s aesthetic, complete with neon colors and synthetic tunes. I particularly appreciate how the Black Paradox’s (DeLorean’s) gull-wing doors simulate an aircraft in-flight even though the game takes place in outer space. A neat feature that I did not notice before is that the guns mounted on its sides change depending on the weapon selected. 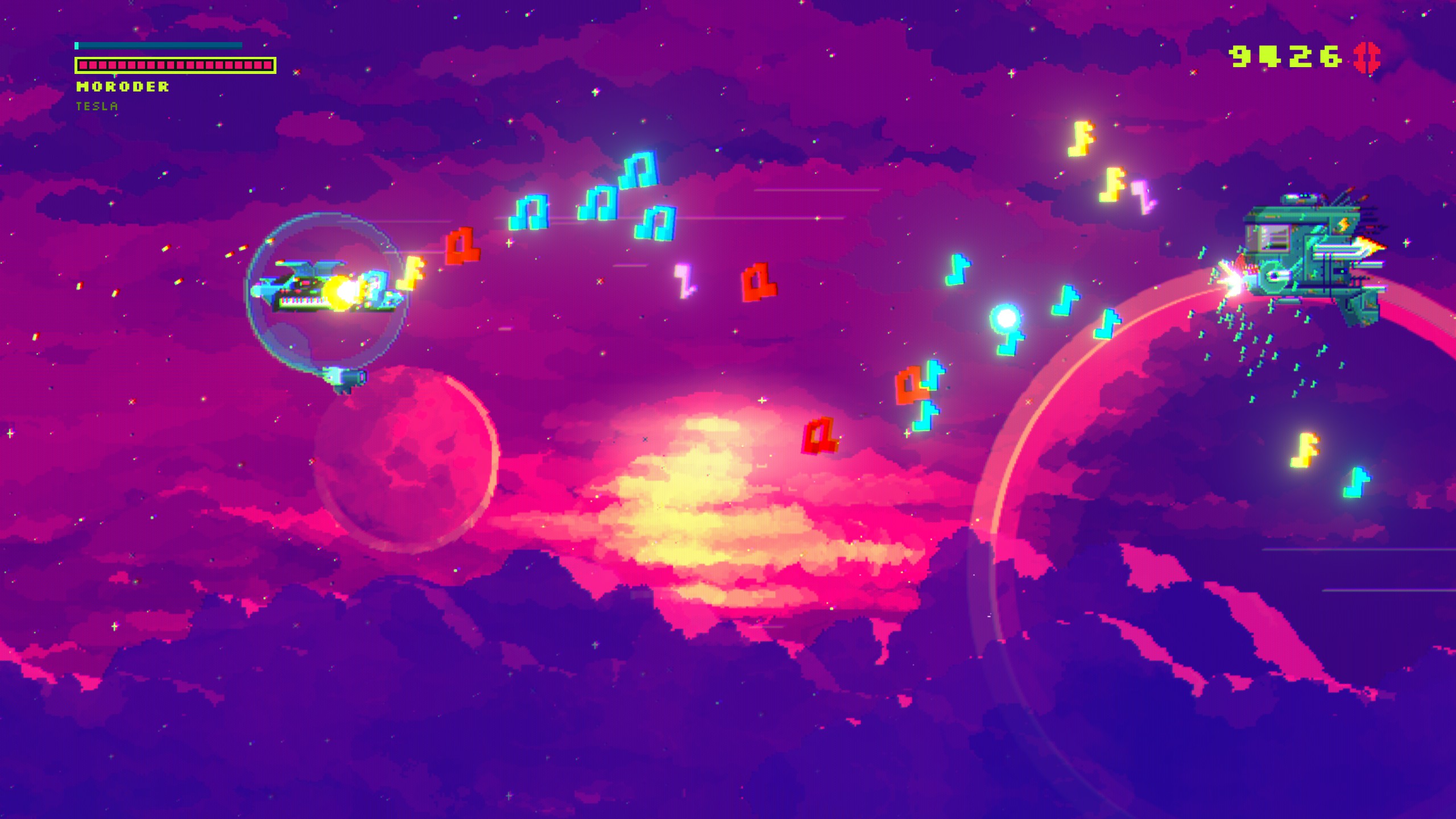 What also remains are the problems that I indicated in my preview. Having invested more time with Black Paradox, I remain steadfast in my convictions. As this is a SHMUP—let alone a roguelite SHMUP—a high difficulty should be expected. Enemies that die in a few hits in the first stage require an increasingly higher quota of damage with each subsequent stage. As with the Early Access version of the game, only one weapon option spawns per stage, and players must choose between one of two passive power-ups after defeating a boss. 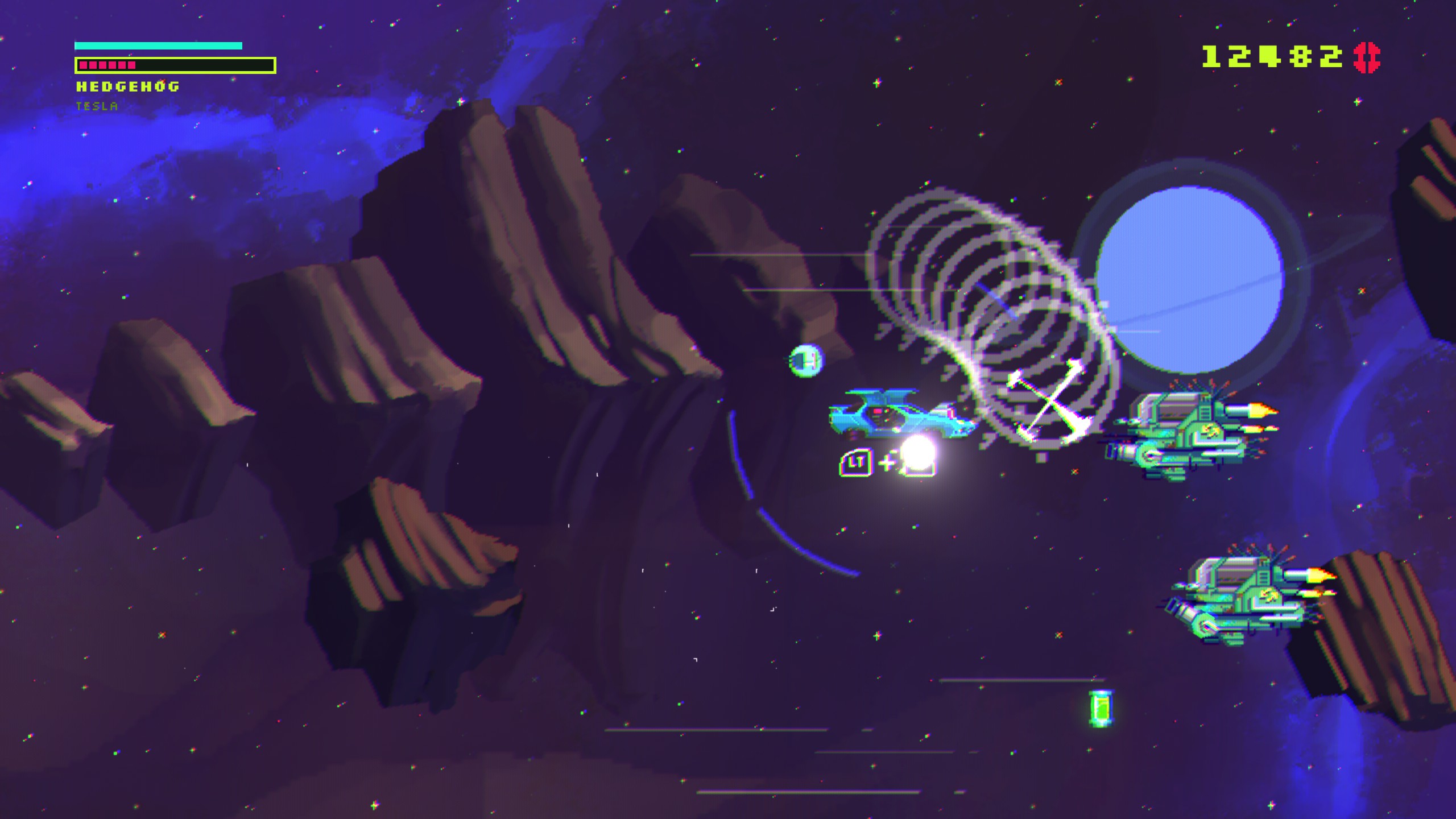 Hedgehog is a cool-looking, but short-range weapon. I frown upon how it preys upon my nostalgic sensibilities.

I could go into detail about those weapons and power-ups, but a fundamental problem with Black Paradox is that its difficulty seems to scale up if players go on a streak. I began to notice this after fighting one of the bosses, Shadow the Space Cowboy, a mid-level boss. Over the course of several runs, making it to him with a digital piano weapon called a moroder, a missile launcher, or a short-range flamethrower, Shadow was manageable such that I could defeat him without suffering any damage. But when I showed up with a railgun, homing missiles, or my favorite, the swam gun, Shadow would then demonstrate a few additional attack patterns, seemingly in an attempt to mitigate the fact that RNGesus had blessed me with powerful weapons. Shadow is not the only boss who does this; he is simply the first boss who switches up. 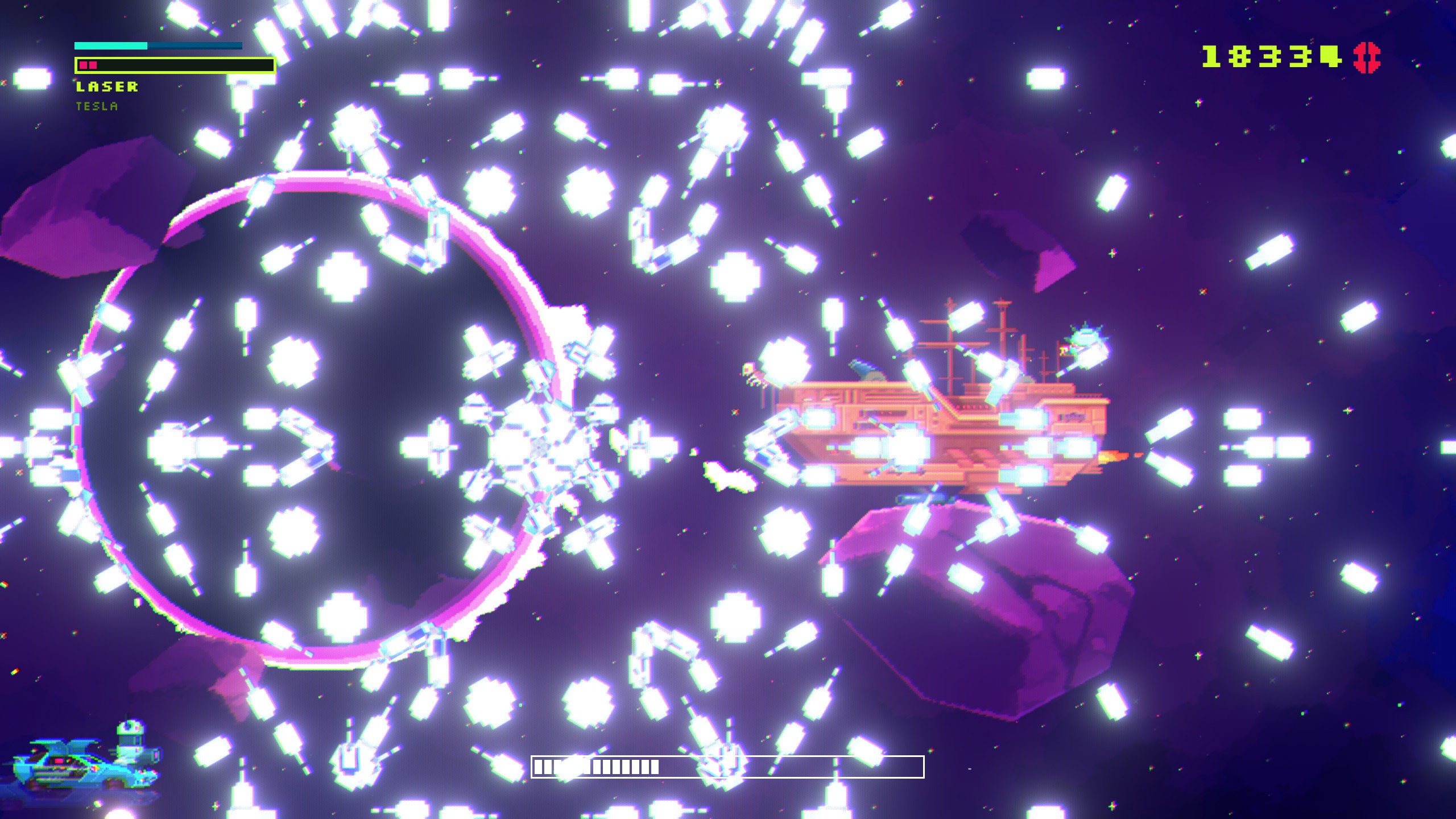 This boss did not do this attack when I brought along a weaker kit. Why does this game punish me so hard for bringing good weapons? How does one survive this (I subsequently died after taking this screenshot)?

I very much dislike this feature. Black Paradox is already a difficult enough shooter as to not necessitate this kind of scaling. Why penalize players for getting good RNG rolls? 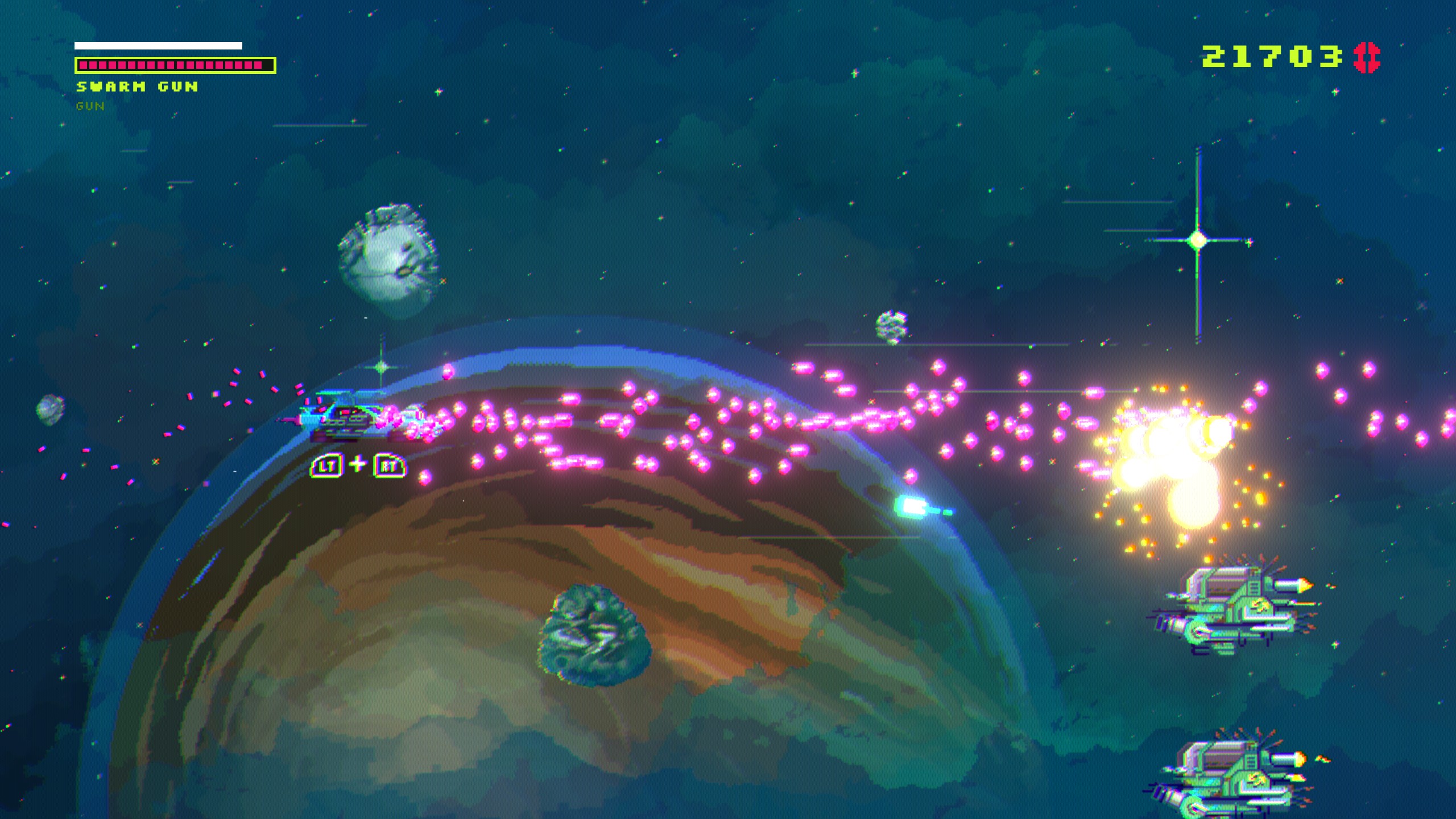 Swarm gun is ultra-rare, but ultra-fun.

Another gripe I have with Black Paradox is its chip upgrade system. Players will naturally play through multiple runs, getting (somewhat) better with each run; they can earn cash (points) along the way, which they can use to purchase these chips in the garage at the main menu. Chip upgrades are supposed to be the game’s built-in system to mitigate RNG chaos over time. Players can purchase chips that come with passive abilities such as a low-percentage chance to spawn missiles while firing, and statistical buffs to stats like damage and HP. Unfortunately, the best upgrades are prohibitively expensive, meaning that players will have to depend on grinding levels to make these purchases. And even after acquiring the requisite chips for expensive kits, the desirable chips may no longer be available for purchase—some might even increase the passive abilities while depreciating in stats. This is not good balance, a flaw that is consistent with this game’s other shortcomings.

When I usually return to an Early Access game after it has fully launched, I expect to experience more than what I did during my first foray. Black Paradox strikes me as a game where Fantastico Studio exhausted their ideas, and thus was unsuccessful at bringing something new to the table. Those who absolutely crave a shooter with 80’s neon and synth tracks may find better value with Black Future ’88.

Black Paradox is a game seemingly designed with the philosophy that gamers enjoy ice skating uphill.