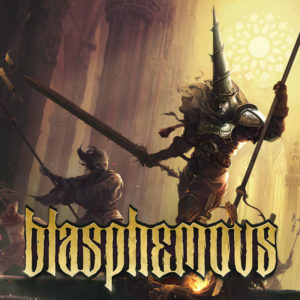 Blasphemous is a game that has been on the radar of indie lovers since the launch of its Kickstarter campaign on May 24, 2017. Sporting hand-drawn pixel art, a seemingly gothic aesthetic, and gory visuals reminiscent of Splatterhouse from the 16-bit days, word-of-mouth spread fast. As a result, developer The Game Kitchen eclipsed their modest goal of $50,000 within 24 hours; by the end of the campaign, they would raise over $333, 000. Driving Blasphemous’ popularity was its not its raison d’etre as a game heavily focused on religion. Because of its themes, at GUG would be failing at our mission if we neglected to review it. 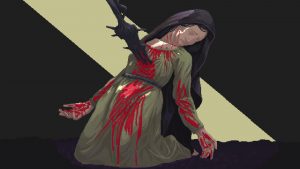 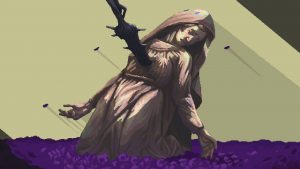 In the world of Blasphemous, this is what a plea made and a prayer answered looks like.

Undoubtedly, Blasphemous overflows with religious iconography, though I never felt uncomfortable with it as I did during my playthrough of The Binding of Isaac. Then again, I am a Protestant (Non-Denominational with Baptist background), and Blasphemous targets  Spaniard Catholicism. Superficially, I can see how one might become offended by presuming Blasphemous to be a perversion of Christianity, but the Blasphemous Digital Art Book augmented my appreciation for what The Game Kitchen has accomplished. I believe this imagery is an homage to Spaniard culture and religious tradition. 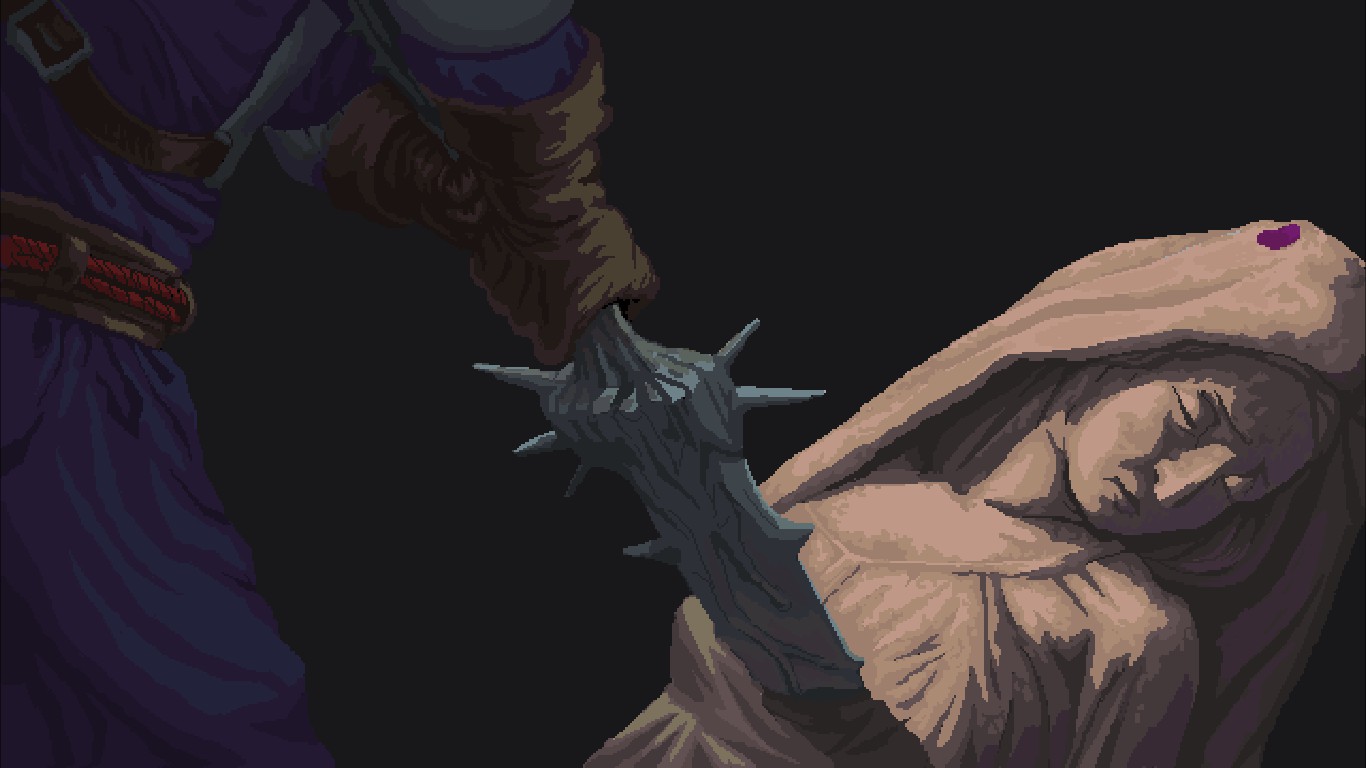 It is said that this stone statue covered with petals was once a young woman who, tormented by a deep feeling of guilt, struck her chest with the figure of Our Father, asking him to be punished. The Miracle manifested itself in the figure of the Father, emerging from her a wide and long edge, a great rooted sword, which pierced his guilty heart to later transform his body into stone. That sword was called Mea Culpa in allusion to the last words of the young woman.

The Game Kitchen borrows generously from the robust Castillian, Sevillian, Andalusian (Granada) architecture, as there are nintey-one federally-protected cathedrals, co-cathedrals, and former cathedrals in Spain. Additionally, at least three saints—Saint Sebastian and Saint Francis of Assasi, and Saint Wilgefortis—inspired the designs of several NPCs and bosses. Common enemy concepts as well as the protagonist are derived from famous works of art with religious themes, such as the oil painting Procesión de disciplinantes (A Procession of Flagellants) and the sculpture Pietà; the number of assets in Blasphemous inspired by Spaniard creativity throughout history are too many to name. 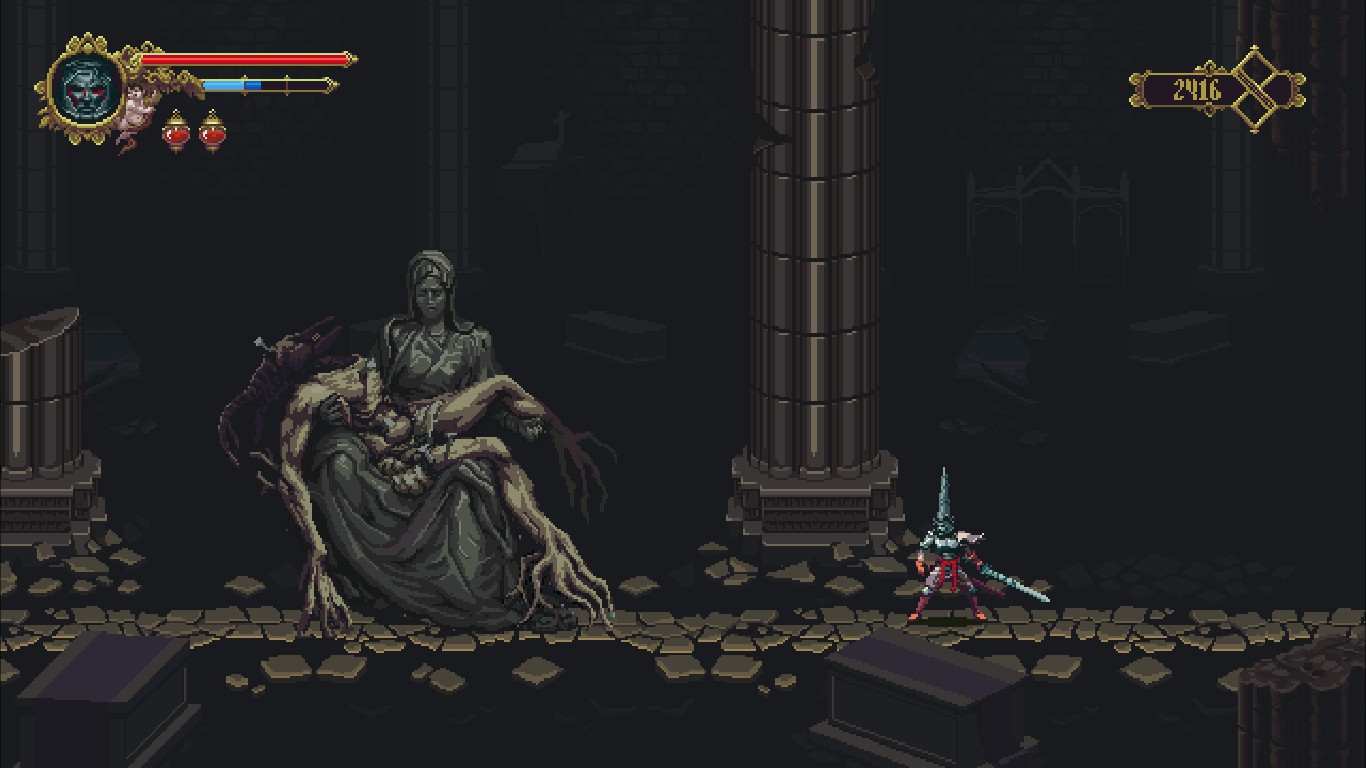 Practically every aspect of Blasphemous can be traced back to some Christian reference.

Religion in Blasphemous is based upon an event known as “the Miracle.” Its deity is called the Twisted One, named so because of how its body became contorted as an answer to a prayer requesting atonement for unnamed sins. The game deploys language associated with faith, such as “holiness,” and “sanctification,” but I do not recall much, if any, discussion on the topic of salvation. In fact, this faith focuses acutely on sin and punishment. Even the most zealous adherents to the arbitrary whims of the Twisted One/the Miracle maim themselves in devotion; one example involves a convent of nuns who have burned their faces with hot oil to rid themselves of the vanity that is beauty. There are many other examples of distorted, nearly satirical manifestations of Christianity such as this in Blasphemous, which I interpret as potential criticism against ritual laws, legalism, and Christianity when we neglect its most important component—Christ. 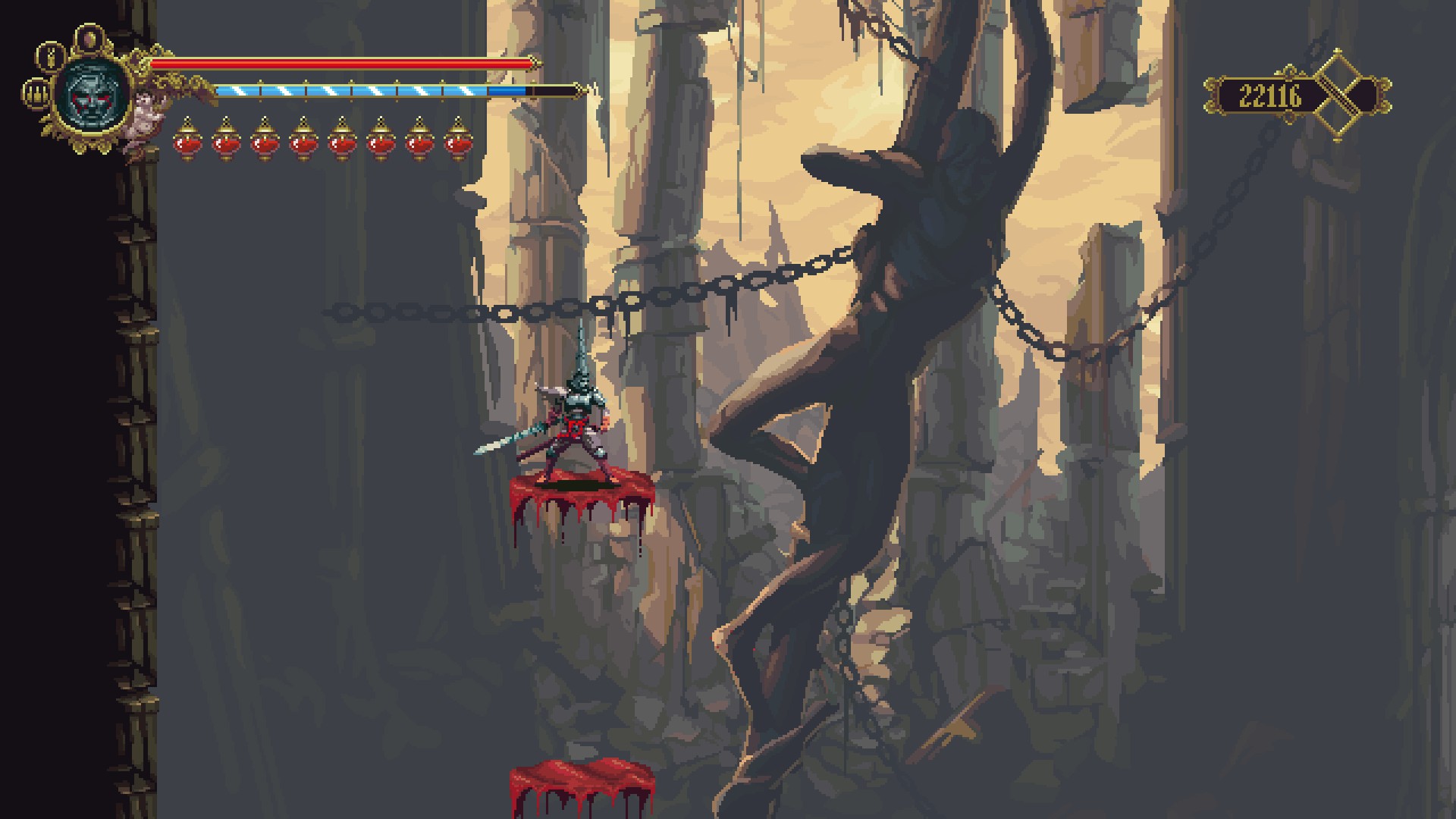 The Twisted One is the first patron saint of the Miracle in Blasphemous.

As the religion in Blasphemous is focused on punishment for even the smallest of sins, these depictions of penitence are unambiguously (though admittedly satisfyingly) gruesome. For perspective, the game begins with the protagonist waking on top of a mountain of naked corpses—thousands of these dead bodies litter the background through several screens until the player encounters the game’s first fight against the Warden of the Silent Sorrow. Upon defeat, a cutscene plays (partially included in the trailer above); a waterfall of blood pours from its pierced side, and the hero, known as the Penitent One, removes his capirote, fills it with the blood of his fallen foe, and hurriedly replaces the blood-filled capirote on his head, effectively bathing—baptizing himself—in the blood of this enemy and those to come. If this and the proceeding cutscene with a woman stabbing herself with a graven image of the Twisted One sound grisly, then turn back, because Blasphemous never tapers on the macabre.

The violence in Blasphemous approaches Mortal Kombat levels…and I like it. Depicted here is a Righteous Riposte followed by an execution.

In a theocracy as brutal as Cvstodia, ain’t nobody got time for drugs, alcohol, or vulgar language. However, as I indicated in the above paragraph, there is some nudity, but those without clothes are depicted as tortured individuals not designed to elicit lust; for example, the Lady of Six Sorrows bears six swords pierced into her bare bosom, blood pouring down her torso. Jocinero, Son of the Moon and the Bull, is depicted as a cherub infant, whose tiny penis is visible. 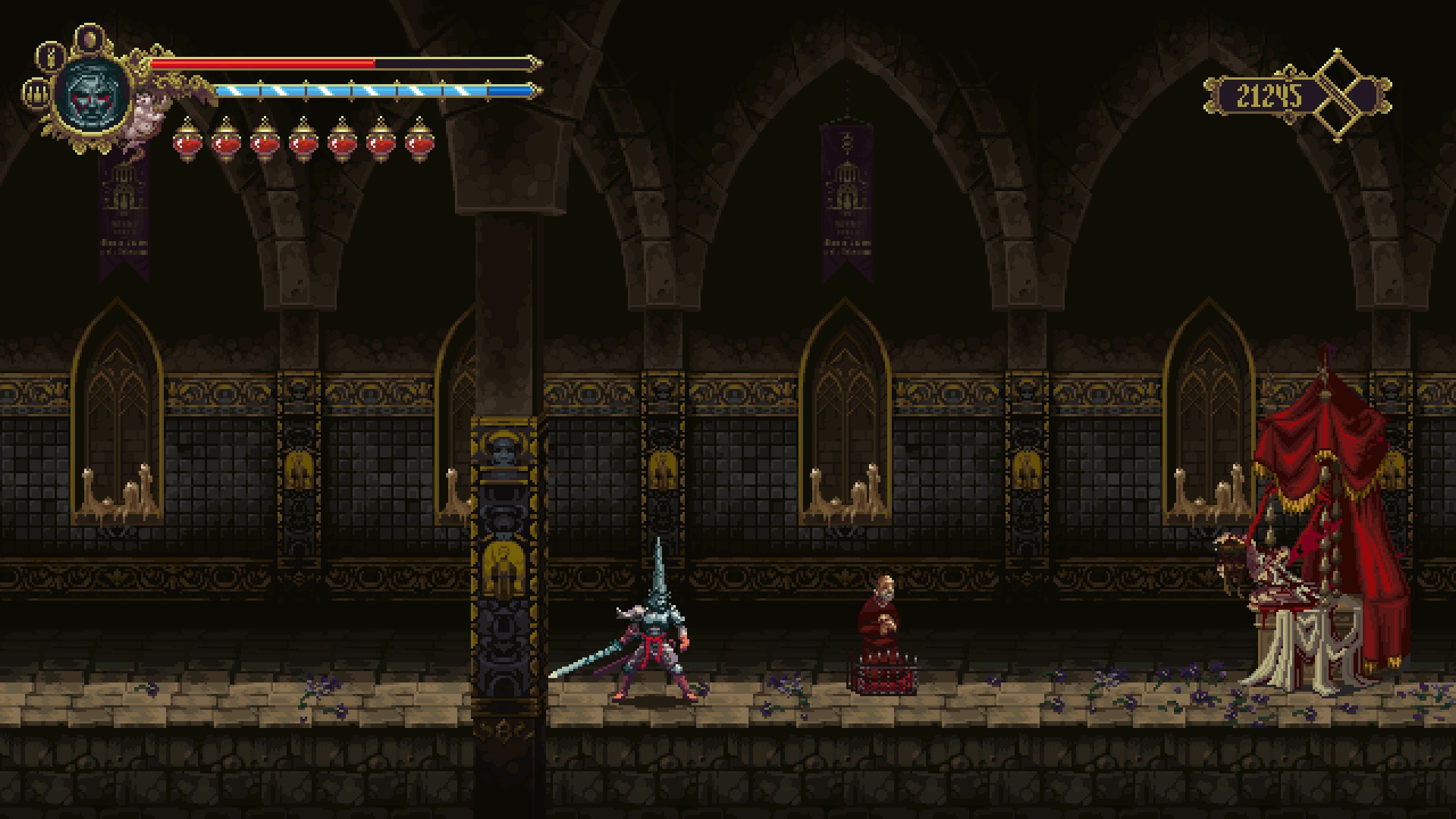 With all seriousness, I think those who purchase Blasphemous without the Digital Art Book are doing themselves and The Game Kitchen a disservice. 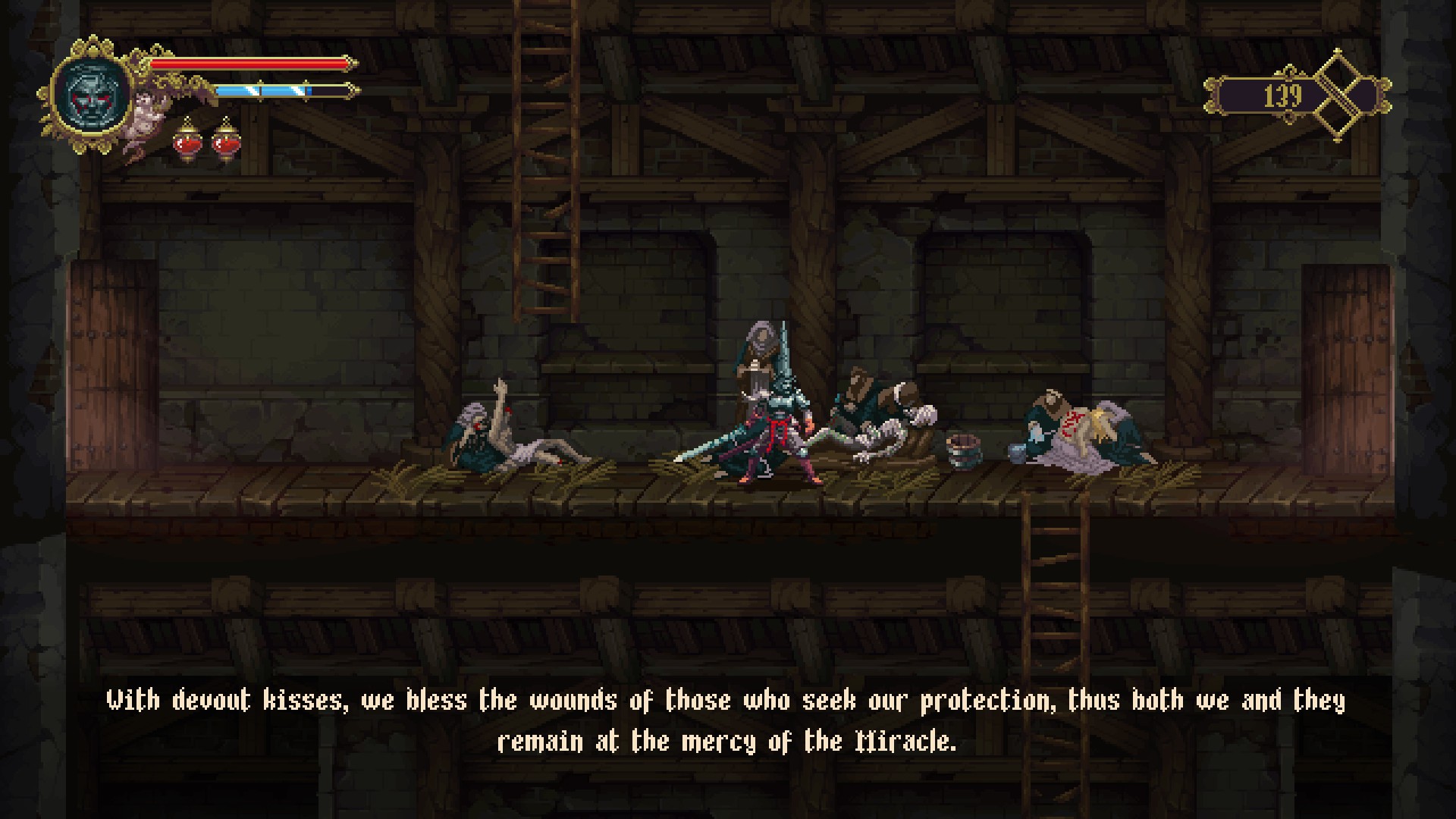 Everyone serves their penitence differently.

As I mention in the Content Guide, Blasphemous begins with Penitent One regaining consciousness atop a heap of his slaughtered brethren, the Brotherhood of the Silent Sorrow, an order whose penitence for sin is a vow of silence. As Blasphemous is a game featuring an emergent story, several hours will elapse before players learn that the Penitent One’s mission is not that of revenge, but of deliverance. Deogracias, a minstrel of sorts, reveals that the quest lies within the Mother of Mothers, a church whose doors will unlock only after carrying out the Three Humiliations,  or in the style of a traditional Legend of Zelda game before unlocking the Master Sword, defeating three bosses. 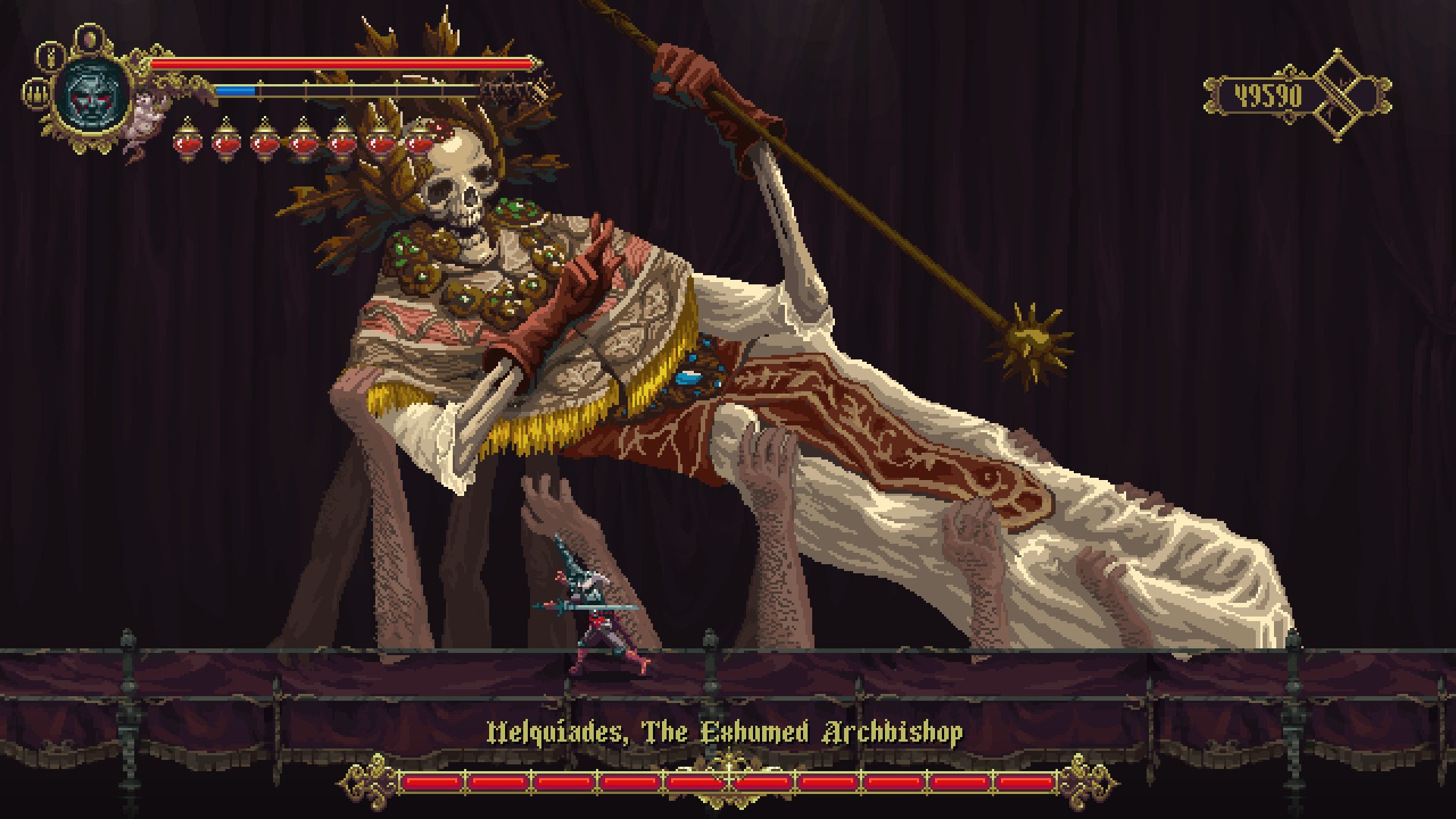 Some truly amazing bosses await in this game.

Accessing the Mother of Mothers is an homage to the Golden Statues in Super Metroid. Indeed, Blasphemous is (yet another) metroidvania with metroidvania features: explore a spiraling, non-linear map with thematic areas that eventually interlock via pathing, gateways, and fast travel portals; discover skills that render traversing previously-impossible terrain conquerable; and of course, beat down gatekeeping bosses. 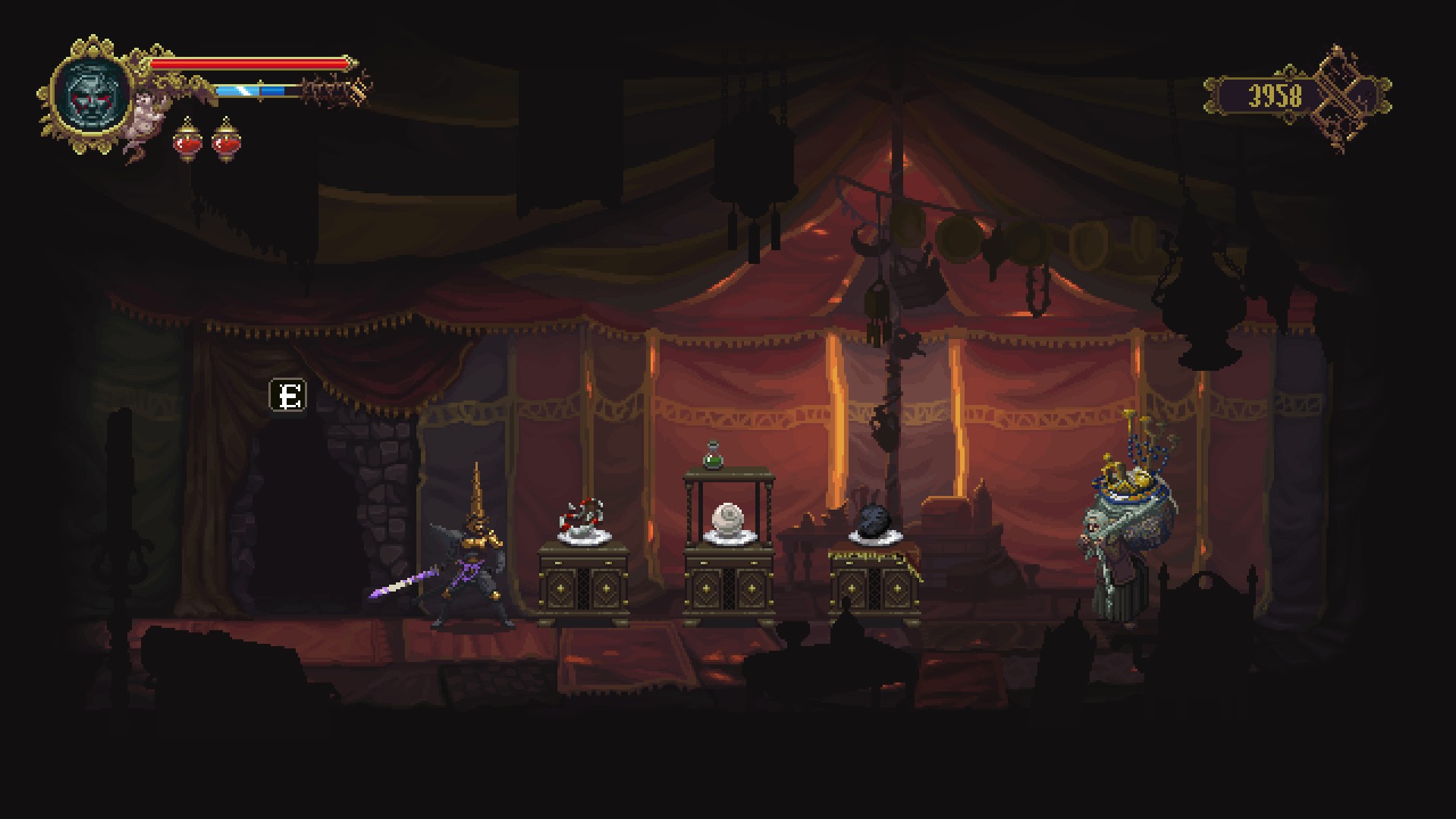 Merchant selling items in a special closed room? Yep, this is a metroidvania alright.

This sounds formulaic because it is; Blasphemous ticks all the video game boxes. Collecting and equipping rosary beads provides passives such as reducing recovery when falling from high elevations, reducing incoming damage, or increasing dodge distance. Sadly, though collectable skills are categorized separately—rosary beads, relics, and Mea Culpa hearts—they all function to provide passive abilities, making them feel redundant even though they are “tiered” so that the Penitent One can only use eight rosaries, three relics, and one Mea Culpa heart at a time. Even prayers, the game’s interpretation of magic, can be exchanged in the menu at a whim (Mea Culpa hearts can only be changed at save shrines). The Game Kitchen likely designed Blasphemous this way to facilitate various playstyles and replay value, but a category or two of permanent perks might have made these acquisitions more meaningful. 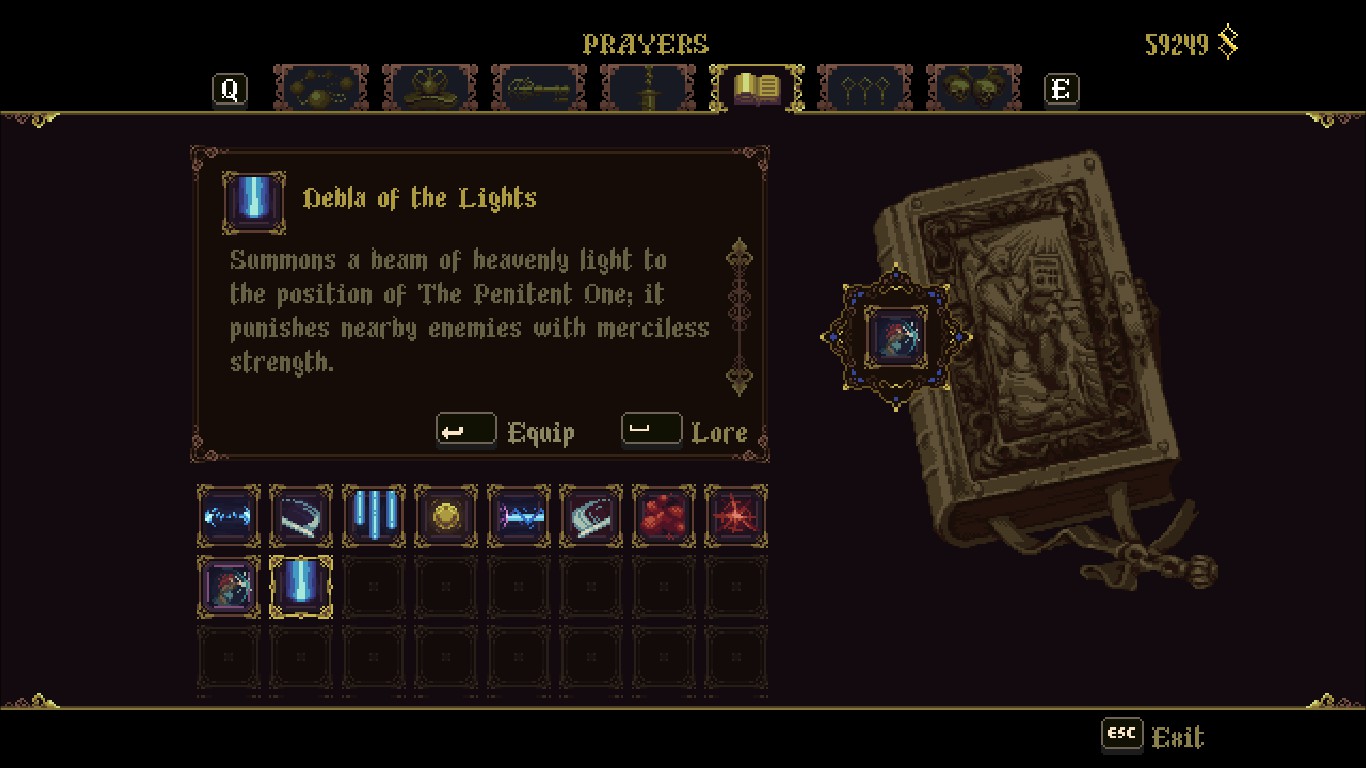 There are plenty of customization options, but there is no incentive to use them.

Mea Culpa upgrades actually are permanent, but regretfully, the only indispensable one is its damage increase. I did at least use the Fervous Blood tree because of its occasionally practical properties as a linear projectile. Even so, the majority of the gameplay in Blasphemous consists of hacking and slashing from beginning to end.

While I might have relished the opportunity to use a different weapon, there are story-specific reasons why I cannot. I extol the digital artbook because within its contents, The Game Kitchen discloses the fine minutiae of their core design principles for every single detail found in Blasphemous, including why the Mea Culpa is the game’s only primary weapon. This painstaking intentionally manifests at every (initial) enemy encounter; appropriately, nuns claim sanctuary in convents, bishops tarry within  cathedrals, spectrals haunt the catacombs. 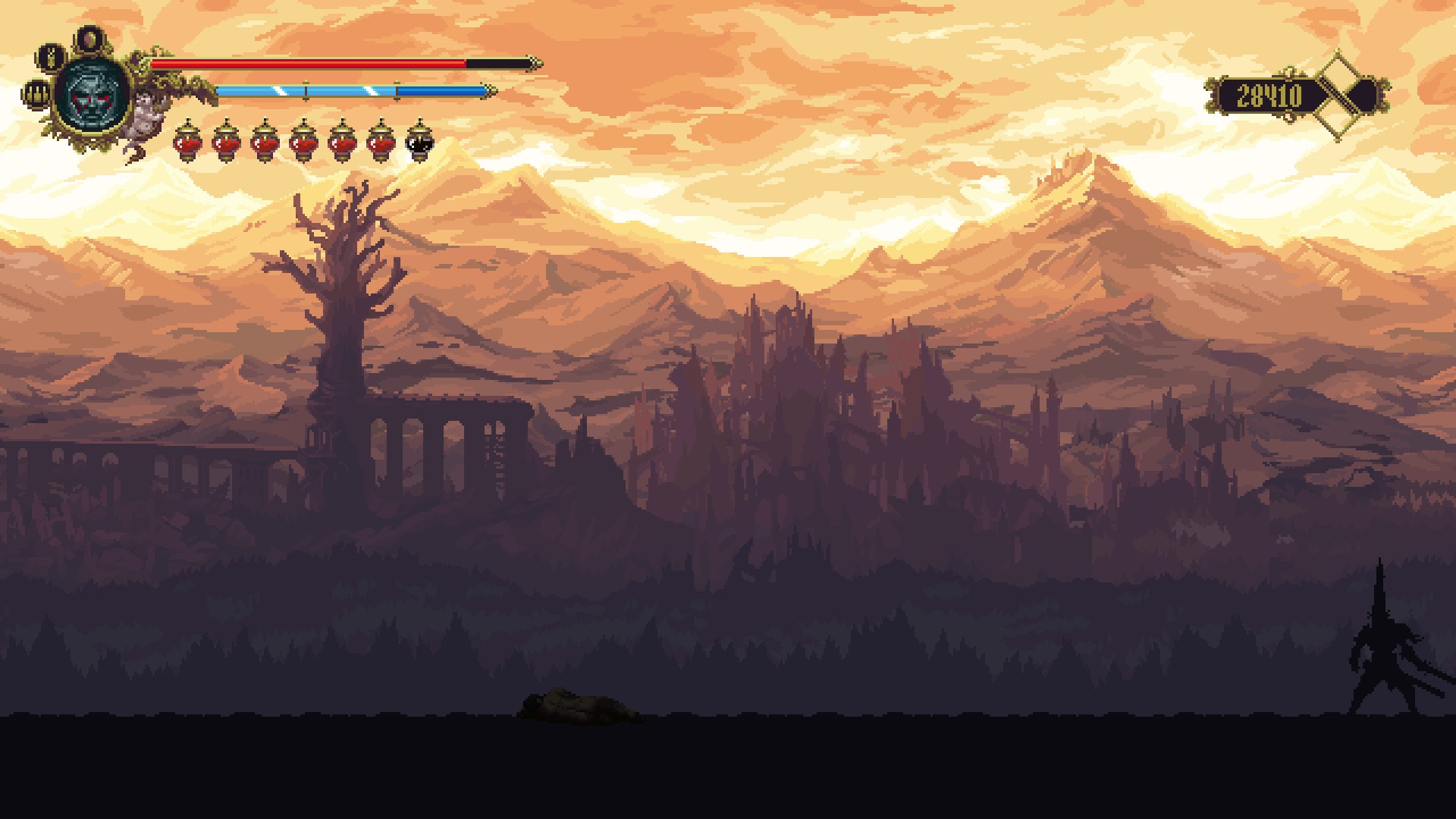 I cannot even begin to explain how I am head-over-heels with this game’s hand-drawn animation, because I need to save space to discuss backgrounds. Indeed, what is usually ignored in game reviews except for when they are poor or absent for a negative talking point, in Blasphemous they are critical for establishing mood. Massive mountains depicting sorrowful mothers, churches whose rows of pews expand to infinity, a sea of sinners turned into salt, and of course, the previously-mentioned Brotherhood of the Silent Sorrow transformed into a tomb. I was not expecting to play a video game that moonlights as a lesson on the (neo-)Baroque, but the art designers at The Game Kitchen are savants. 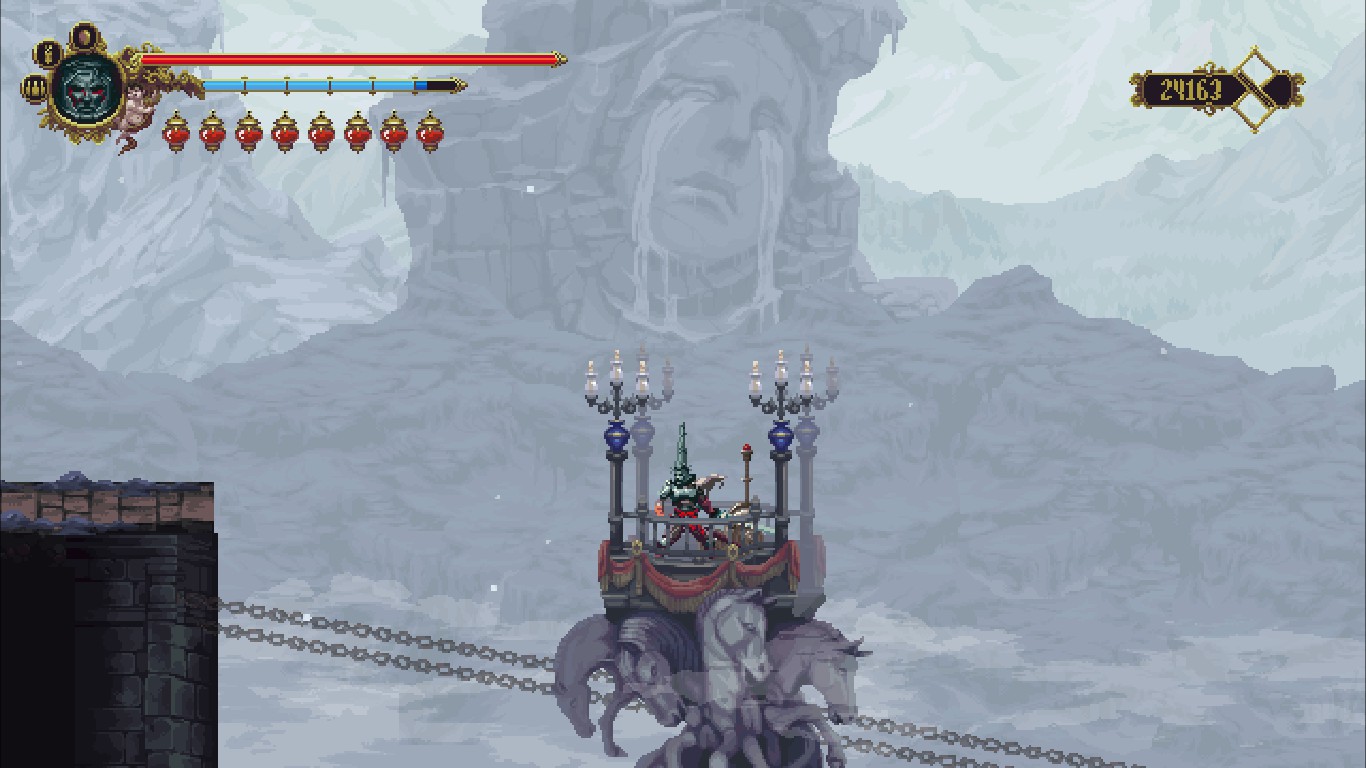 Super 3D Noah’s Ark and The Aetherlight: Chronicles of the Resistance are the kind of titles that mainstream American Evangelicals envision as idyllic Christian video games. I, on the other hand, believe that the best games evoking Christian iconography are those like Blasphemous, which are not designed for younger audiences. With the creative freedom that a mature audience permits, The Game Kitchen has created what I believe to be a provocative indication of what salvation looks like in a world that has religion, but not Jesus. 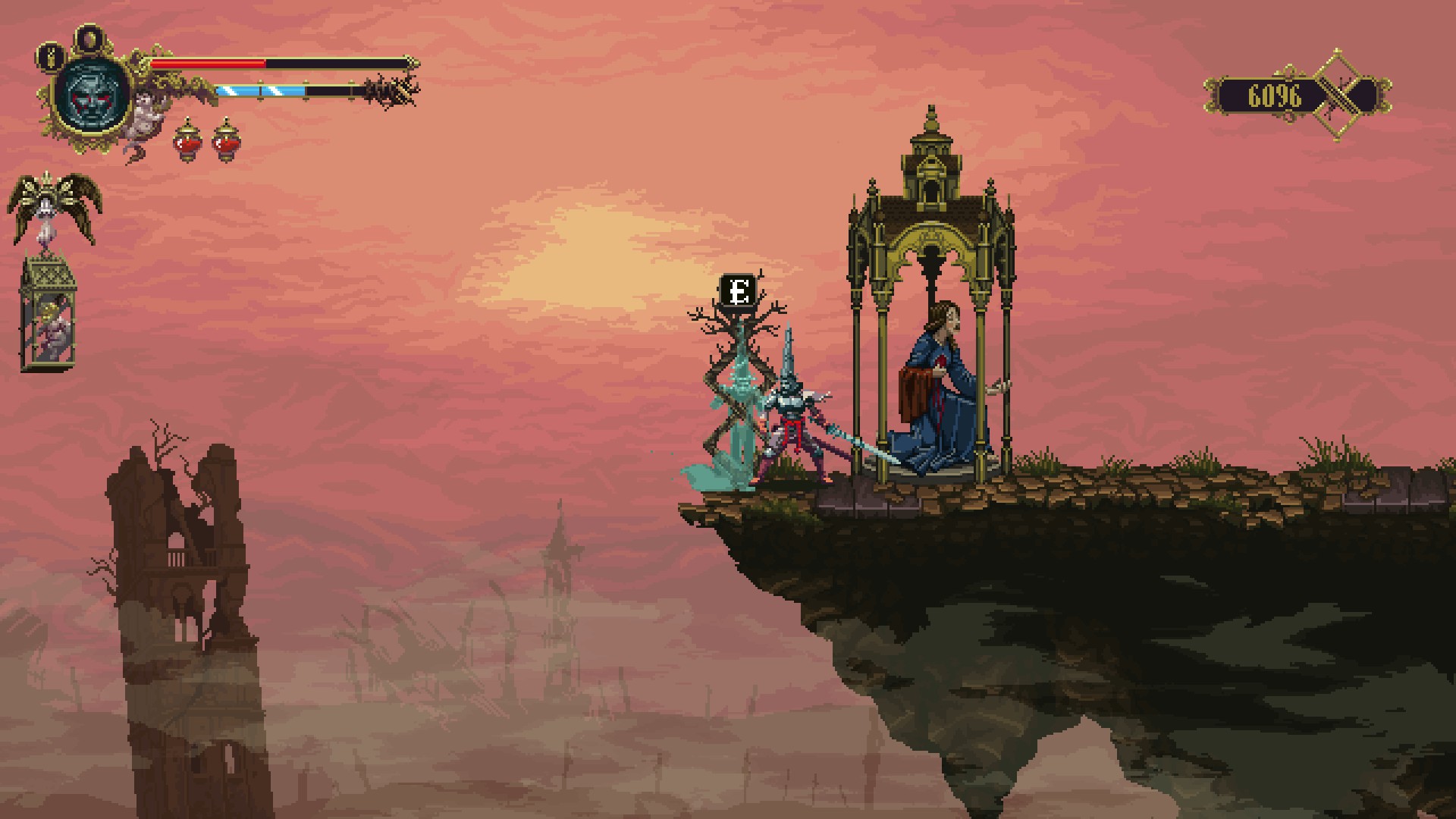 I took a look of faith and did not quite make it, as indicated by the guilt shrine.

Blasphemous is not just a video game; it is a digital anthropological artifact, elevating it to the best "Christian" game that I have ever played.