Review: Blasters of the Universe 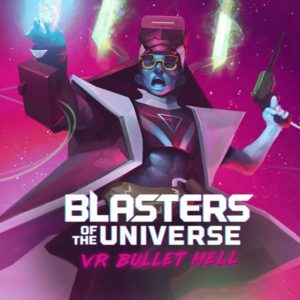 It is no small secret that first-party games, if not also exclusives, are often what distinguishes a platform from its competition. Developer Secret Location remains an indie developer, yet they are dedicated to VR. We had already reviewed The Great C and Transpose when I received news that Blasters of the Universe would be hosting a free weekend from May 3-May 6. Rather than just dip in my toe, I decided to dive in head-first. I am glad that I did, because this is one of the best VR games money can buy. 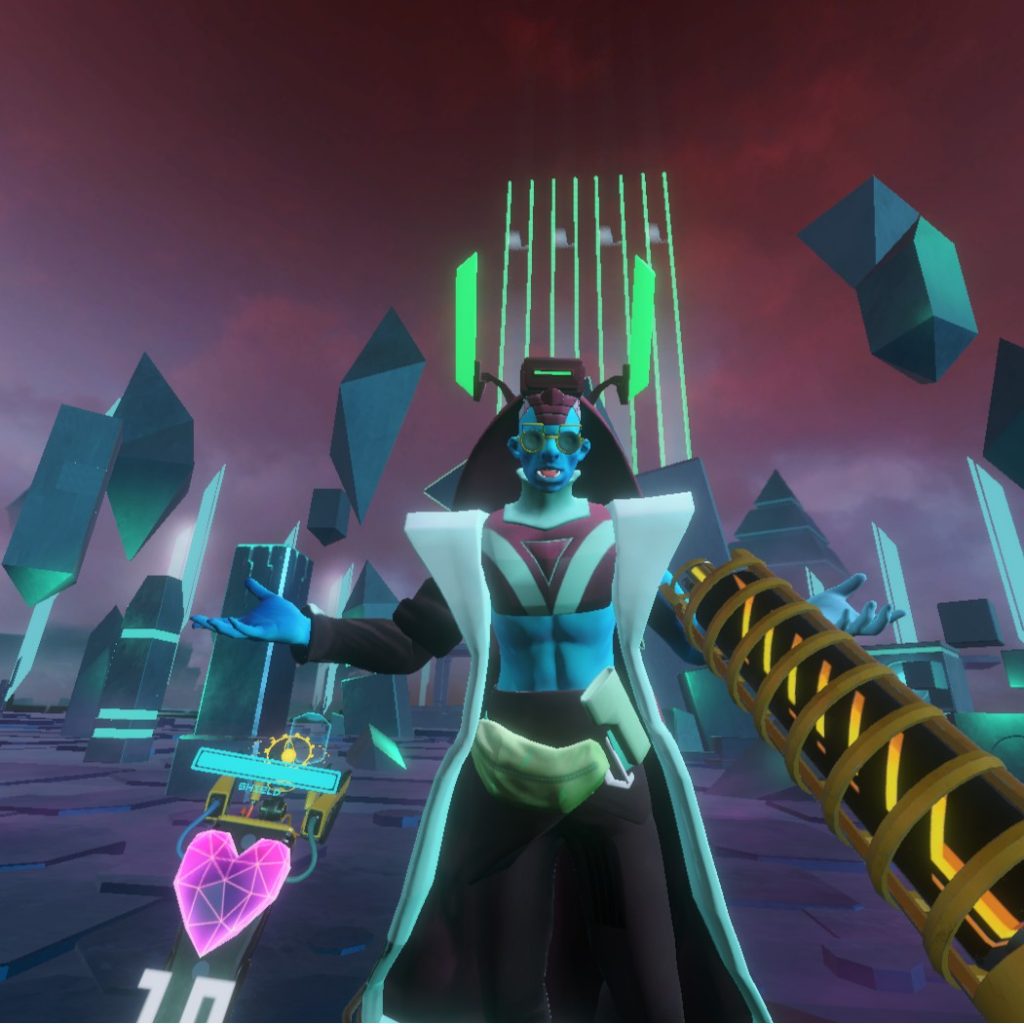 This dude makes you want to punch him in the face, even if that means your own display!

Blasters of the Universe is actually a game that I would not take umbrage with if not for its antagonist, Aldwin. The Secret Location developers accurately replicate through him the modern multiplayer gaming troll. While I understand that this was the intent, Aldwin sometimes drops “s**t” or “f**k” in ways that are accurate for the grown man who might have grown up from his adolescence chronologically, but lacks mental maturation. Because of toxic gaming culture, I avoid multiplayer games, and even when my son wants to play Overwatch, I still have the option to mute those who use their mic to filibuster about how women do not play video games. I wish I had an option to turn him down a notch. 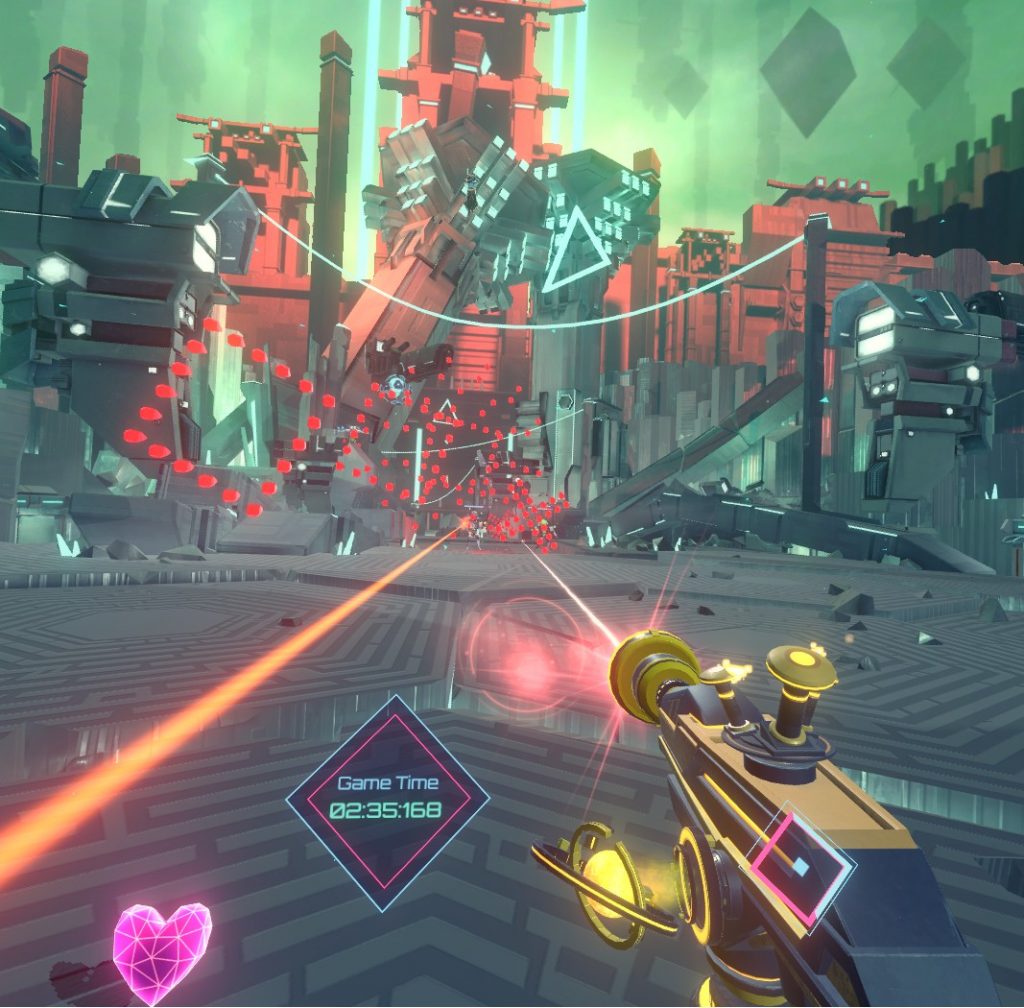 I am coming up on a year with owning an Oculus Rift, and in that short time, the majority of the games I have played have been on-rails shooters. Most of them are good—novel at worst—but I could not say that any of them are worth the price of a VR headset. That has changed with Blasters of the Universe.

In my prior experience with VR shooters, I could sit down in my chair to play them. Some environmental detail, such as an elevator, suspended platform, or motorcycle would move slowly, and I along with it “in-game.” The better-looking titles do this to showcase various environments to gamers in VR where so many assets are less detailed due to the processing power required for action to happen even where the player is not looking. Here is no different; different types are limited to under about ten, though the real variety comes from the bullet spreads when they shoot.

Blasters of the Universe does three very specific things that force me to reevaluate my perspectives on VR, “bullet hell” shooters, and customization. While I am a huge fan of shoot ’em ups (SHMUPs), I steer clear of the games that advertise themselves as “bullet hells”; while I enjoy avoiding a barrage of shots and emerging from the fray unscathed, I do not like being isolated to a small portion of the screen to evade hundreds of bullets on display. Blasters of the Universe masterfully forces players to fully utilize their VR play spaces. When using Oculus, the Guardian System will save lives indeed! 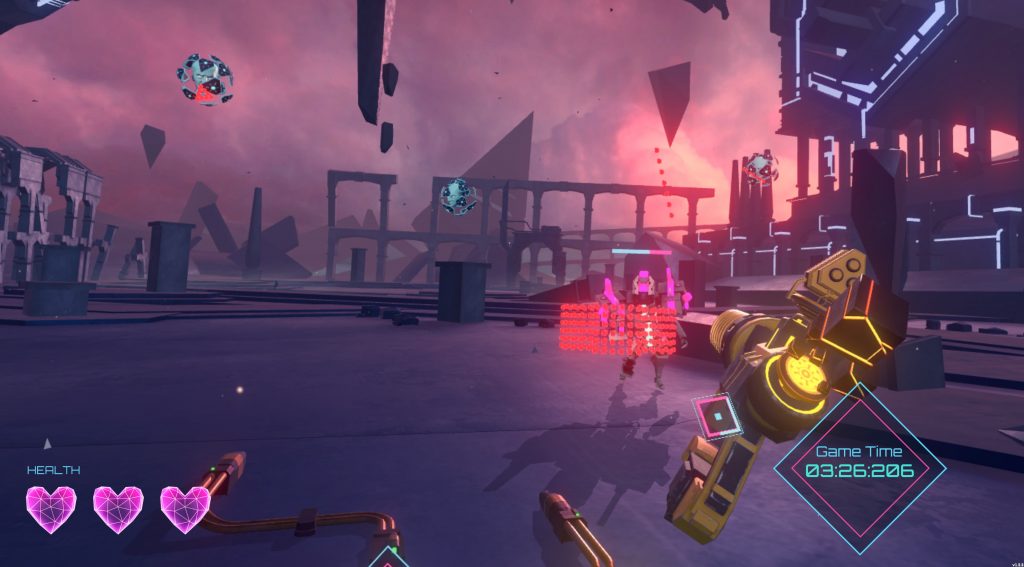 The bullet wedge on the right going to force players to move from their comfy spot.

In this game, when an enemy shoots, players must move their physical bodies to avoid the shot; only when a bullet “touches” the headset does Blasters of the Universe recognize this event as the player getting hit. In tihs way, the game adheres to the conventions of a SHMUP: one must prioritize targets of opportunity or become overwhelmed. After all, the more enemies on screen, the more projectiles that need to be avoided as they can come from directions in what feels like ranging 200  degrees of a circle, with the player’s position being the point of origin in this measurement. Failure to quickly and efficiently destroy these enemies will result in players dodging for their lives like a Goku in his first fight with the Ginyu Force upon his arrival to the planet Namek.

In reality, I sometimes would end up on my knees while pointing my shield in a direction where I am not looking, and I do not get up for a long time…unless I get hit, which triggers all projectiles to disappear, allowing me to avoid the irritating take-multiple-damage-for-a single wave of enemies. In other words, damage “resets” the screen. Trust me when I say that Blasters of the Universe is a full-body experience that will require utilization of the entire VR play area, and perhaps good health too. I actually popped my knee while trying to get up too fast from dodging a laser beam! Man, I am getting old…. 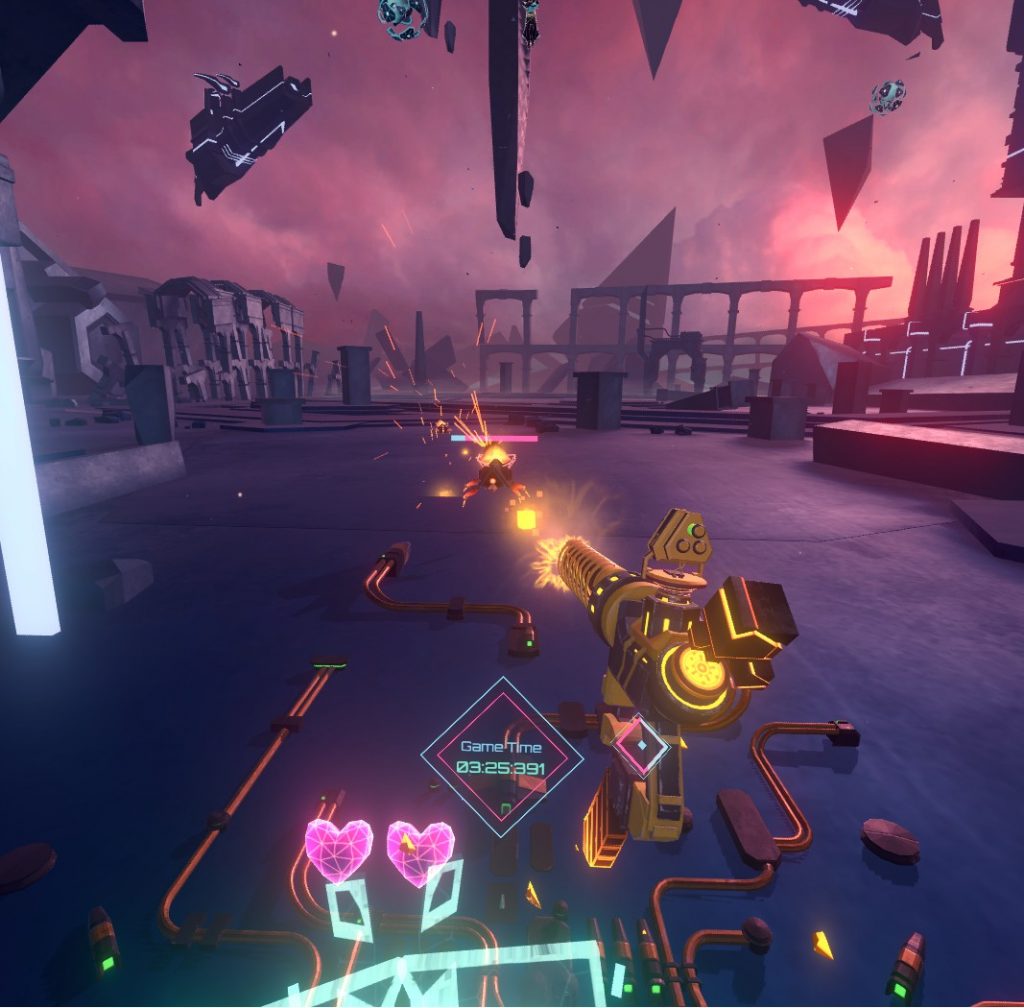 This dude will jump into your face for a hug. Do not allow it!

Along with dropping to my knees, I have jumped over bullets, lain prone on the ground, had my back to the wall, leaned this way and that way. I am actually surprised that I have yet to tackle my desk, but maybe its presence has added to the already…hellish…difficulty, and I subconsciously rely too much on dodging to my left, opposite of my desk in my play area. There is an option to play “casual” mode, but who wants to wimp out and do that?

When facing a hailstorm of bullets, players are not left defenseless. The left Oculus Touch is not only used for loading a new clip into the gun held with the right Oculus Touch, but it can also erect a shield. Along with different shields such as small, large, “sentried,” and reflective, every aspect of the gun is also customizable. The central frame of the gun changes the type of super ability that can be manually activated after vanquishing enough foes; the first gun frame supplies a laser, but I prefer the mega-shield for when so many bullets are on my screen that Neo from The Matrix could not dodge them. Ammo clip types change the damage of bullets, but I prefer the kind that is manually-loaded over auto-charging. Other modifications such as the gun barrel, ammunition type, and special sights can create ricocheting bullets, fast and weak or slow and powerful bullets, laser targeting or auto-reload after killing enemies, and more. As players beat levels, more options unlock. While I usually prefer the game to provide me with already-configured weapons, I enjoyed building my own because the practice field is within the same menu, so experimentation is instantaneous. 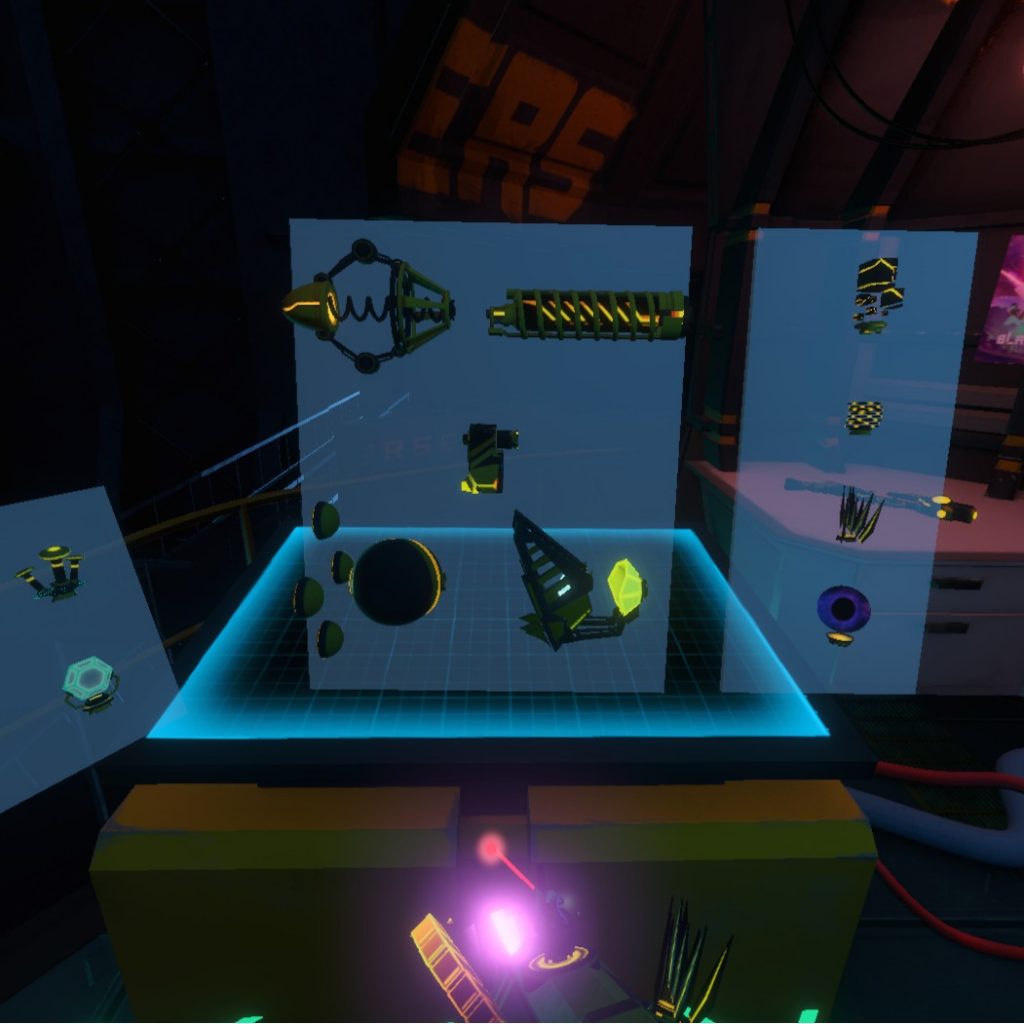 It is hard for me to find elements in Blasters of the Universe that I genuinely dislike. Enemy types may be repetitive, but this is so common in VR that I do not really count it a unique flaw, but symptomatic of VR in general. Another issue that is not the game’s fault is that I wish I had an extension cord for my Oculus Rift, as I kept stepping on it during gameplay, especially after recovering from a crouched position to standing.

Even though he is more vulgar than I would prefer, Aldwin’s trash talk reminds me of my gaming heydays among friends in the era of Halo. He actually motivates me to get better so that I can make him shut the you-know-what up. Combined with all the bullets on the screen making me take cover IRL and the weapon variations, those who hate puns will have to take cover too: this game is…a blast!

Blasters of the Universe meets my expectations in terms of a definitive VR experience, successfully reminded me of the days when I wish I could compete on Nick Arcade.