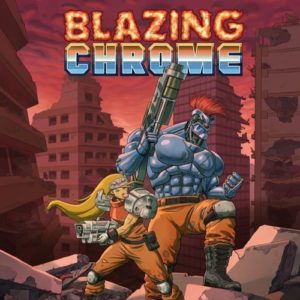 The year is 21XX. Humanity is in ruins following defeat in a war against robots. Their last hope is you, a member of the resistance, on a desperate mission deep within enemy territory. It’s time to blaze some chrome!

This remarkably simple backdrop serves as the premise for Blazing Chrome, a 2D shooter that takes its cues from the shooters of the early 1990s. Leaning heavily on its retro inspirations, it promises an action-packed ride filled with guns, explosions, and awesome boss battles. Can this spirited indie game live up to the old-school hype?

Violence: Most of your time in Blazing Chrome is spent blowing up robots and vehicles with guns and lasers. Explosions are an almost constant presence throughout the game. When you take damage and die, you fall to the ground and your body disappears, sans blood or gore.

Language: One character says “d**n” in the opening cutscene.

Drugs/Alcohol: In one cutscene, a character is depicted smoking a cigarette, while another is shown holding a small metal object that appears to be a flask. 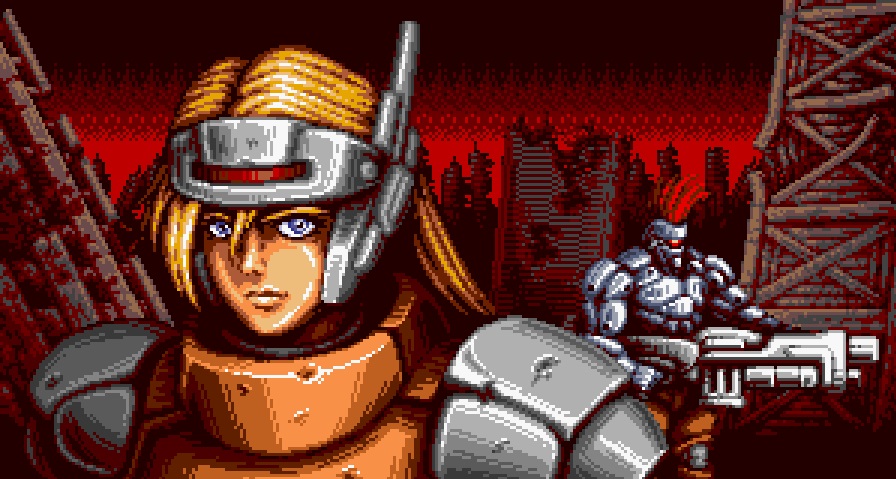 Blazing Chrome’s gameplay is reminiscent of classic 2D arcade-style shooters like Contra and Gunstar Heroes. You start with a basic automatic gun, and you shoot in which ever direction you are facing. By holding down the right bumper, you can halt your movement and aim in eight directions around you; mastering the use of this feature is critical to success, especially in later levels when the difficulty ramps up. Pods are scattered throughout each level, providing access to additional weapons, extra lives, and robot companions that can shield you, boost your damage, or increase your speed and jumping abilities. Any time you take a hit, you lose a life, dropping a special weapon if you were currently using one as well as any robot partner that was assisting you. After a few seconds, you automatically spend one of your extra lives to respawn in the same place with a few seconds of invincibility. This is one of my minor gripes with the game: your character dies with every bit of damage, and you the player then have to wait several seconds for your character to respawn. It would be better if JoyMasher had instead implemented a quick “ouch” animation so that you can get back into the action with as little delay as possible. In a challenging game that emphasizes fast-paced action and explosions, the delays between your death and respawn prove disruptive to the tempo. 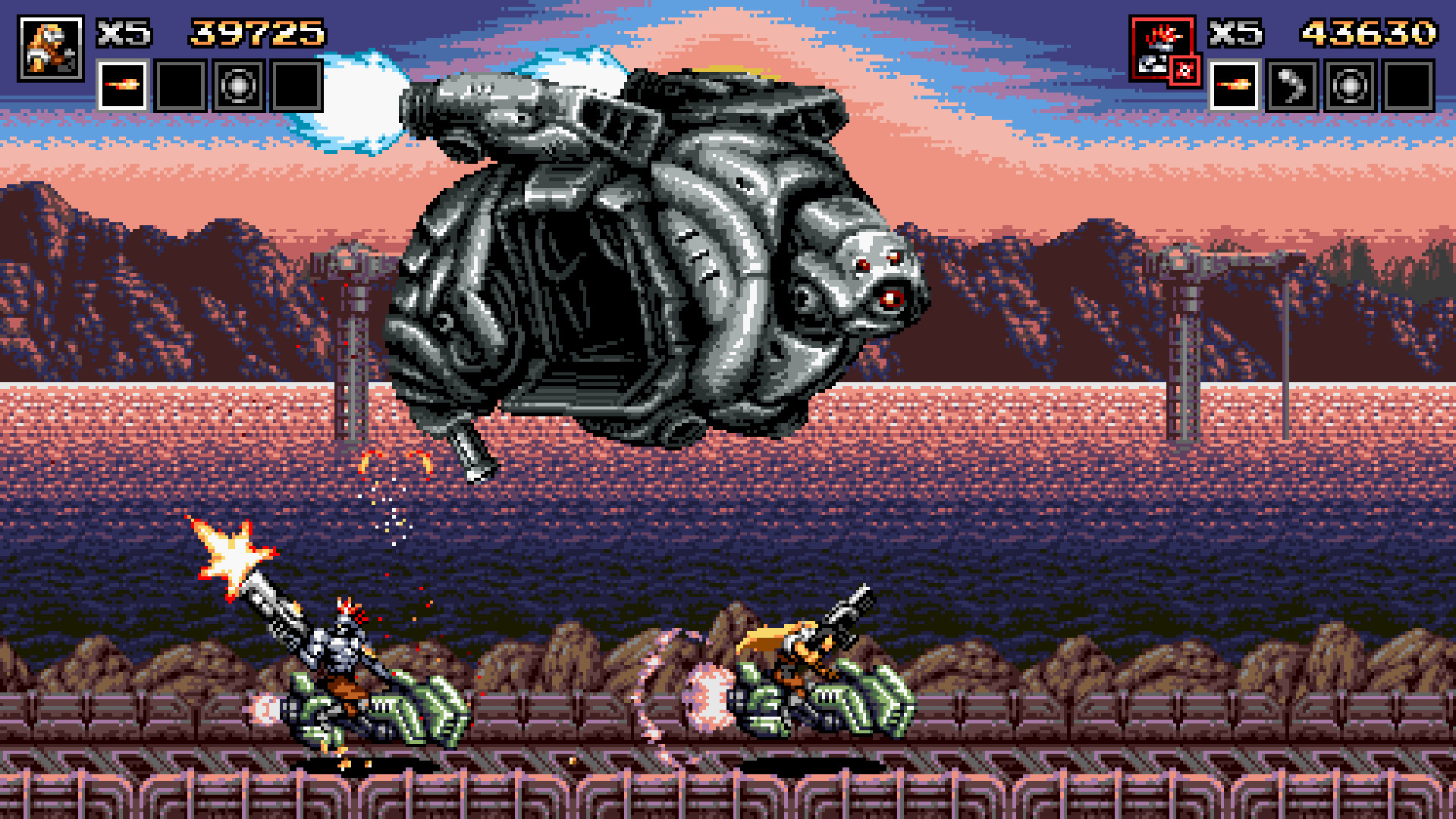 Thankfully, the experience manages to stay fresh thanks to Blazing Chrome’s varied enemies and level design. The game organically teaches you its twists—things like new enemy types or crumbling platforms—by introducing them one at a time before testing you by mixing them together. Some levels also feature a vehicle section, wherein you board either a slow but powerful mech, or a speedy hoverbike that zips across the terrain. The bosses and minibosses that appear in each level are particularly well-designed, varying wildly in size, shape, and the types of attacks they launch at you, from laser blasts and gunshots to fast-paced melee strikes.

When you play through Blazing Chrome the first time, you can choose between two characters, a human female named Mavra and a reformed robot dude named Doyle, who are both equipped with the aforementioned automatic rifle. Upon completing the game with one of these characters, two more characters are unlocked, both of whom forego a traditional weapon in favor of a short-range melee attack and a long-range move that requires a charge to pull off. These new characters cannot pick up any weapons, thus forcing you to get up in your enemies’ faces most of the time. The game feels tailor-made for its co-op feature, allowing you and a friend to join forces and increase the mayhem. Tackling levels with together—with one player selecting a gun character and the other choosing a melee character—lets you experience the best of both worlds.

Presentation is one of Blazing Chrome’s standout elements, with the game’s 16-bit-style graphics and ‘80s-esque action soundtrack pairing nicely with one another. A few lo-fi voice clips are sprinkled in as well, further solidifying the game’s retro vibe. Character design is just as strong as the art and music; the player characters each have their own distinct look while still drawing from the same pool of delightfully cheesy ‘80s and ‘90s action movie tropes. Enemy designs take the cake, with many of them sporting bizarre, insect-like features that contrast with their mechanical nature. 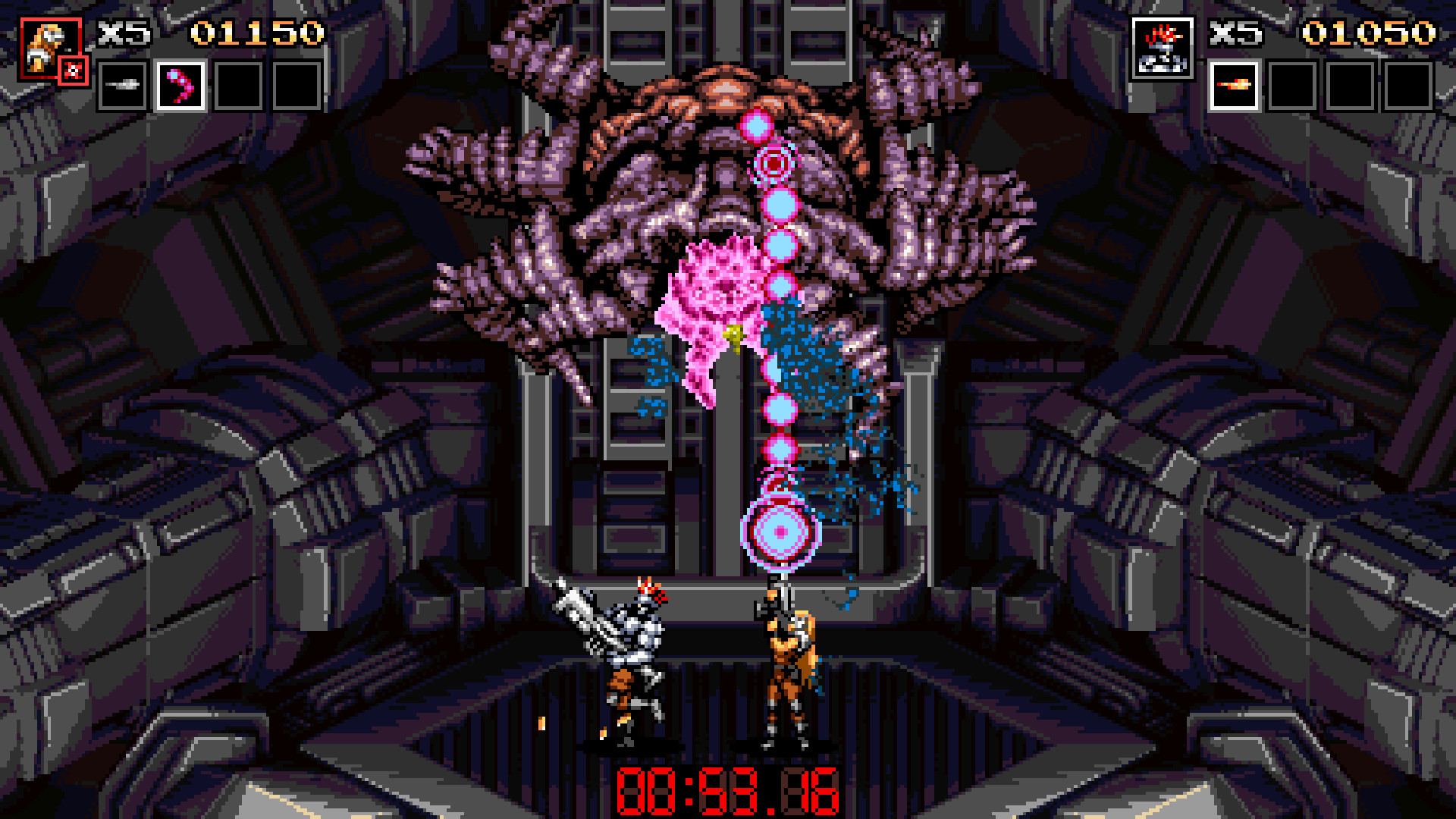 My one major disappointment with the game is that there simply isn’t much content overall. With only six stages, the experience ends much too quickly. Several new modes become available after beating the game on normal—A boss rush mode, a mirror mode that flips the direction of the stage, and a hardcore mode with increased difficulty—but none of them add any new stages or enemy types. Ultimately, Blazing Chrome takes an arcade mentality to replayability, where the best reason to replay the game is to aim for a high score on leaderboards. Your mileage with the game in the long run will depend on how much you are drawn to that approach.

Still, if the worst thing I can say about Blazing Chrome is that I enjoyed what it offered and wish that there was more, then there’s no question that it’s a good game. It’s a blast to play thanks to its tight gameplay and awesome retro aesthetic, and even better when played with a friend. The experience may be short, but it’s well worth your time.

Blazing Chrome's explosive action and old-school aesthetic delight, even though the experience ends too quickly.