The typical fantasy disclaimer applies here. If you do not want to play something that involves magic or fictional philosophy, this is not for you. Beyond that this game has fighting, but no blood. There is minor, infrequent swearing that I honestly did not notice.

Bravely Default begins like many RPGs before it. In the opening hours you learn that the crystals are being enveloped in darkness and an evil empire is killing off the only people capable of stopping. As if things could not possibly get worse, our main character, Tiz, loses his village to a giant rift in the earth.

Tiz encounters Agnes (pronounce Ahn-yes) and gets dragged into her quest to save the crystals. The other main characters are quickly gathered together in the opening chapter of the story. Ringabel is a smooth-talking amnesiac with a strange diary. Edea is out on her first mission for the empire and quickly forgets what side she is on due to some questionable actions perpetrated by her superior officer.

The first half of this game seems routine. Go to a continent, find the crystal, and then unlock said crystal. Where the story takes a chance is in the second half. Without giving too much away, I really enjoyed chapters 5 and 6, but the game seemed to drag on in the last two chapters. The plot twist and multiple endings will leave the player with a nice, lasting impression of this game.

To supplement the main story, the player has the opportunity to read through Ringabel’s diary at any point in the game. The writers did a good job of this because, at first, the journal makes very little sense. It appears to tell the future, but parts of it cannot be pieced together until further in the story. Depending on how much you dive into it, the supplemental material in this game can take almost an hour in total to read through.

Overall, the story is great, but struggles with holding the player’s attention in the later parts. 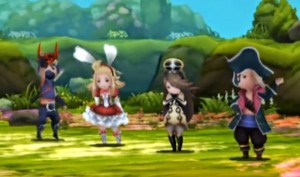 This is classic, turn-based combat with a unique twist. The game’s title, Bravely Default, is named after its Brave and Default mechanics.

Brave borrows extra turns ahead of time and allows multiple attacks all at once. The downside is that the character will then have to pass however many turns borrowed, leaving them open to enemy attacks. The good news is if the battle ends, character turns are reset. That means a party can take four turns with all four characters and, if they succeed in winning the battle, suffer no consequences.

Default is this game’s Defend. However, unlike most RPGs in which Defend is a wasted turn, Default will reduce damage and add an addition turn that can be braved next time that character is up. A great use (and a great necessity in Hard Mode) is to Default when a boss is about to unleash a strong attack to reduce the damage received and follow up with two attacks the next turn.

Some extras that make the grind easier are the abilities to set up auto attacks and speed up combat up to 4X. This is incredibly useful during 80% of random encounters when the characters are likely strong enough to abuse the Brave system and win in one turn. Be careful to turn it off during boss battles, however, as some will devastate a party that is not actively participating.

Difficulty, frequency of random encounters, experience points, gold, and job points can all be altered in the menu. Difficulty can be changed from Easy, Normal, and Hard modes. EXP, JP, and money can all be turned on or off (for low-level enthusiasts out there). Random encounters work on a sliding scale from normal, up to double, down to zero encounters. All of these can be used to change a user’s experience of the game. Finally have the hang of the mechanics and looking for a challenge? Up the difficulty. Feel over-leveled? Turn off EXP or random encounters. Want to grind? Bring encounters to max and fight after every other step.

The last thing that sets apart Bravely Default from the average RPG is its job system. Following the likes of Final Fantasy V, jobs are acquired as the story progresses or via side-quests. In total, there are more than 20 jobs with unique abilities. Characters can be swapped to a new job anytime through the main menu. Abilities are earned as the job level increases which occurs when the character has accumulated enough job points. Any abilities learned can be assigned in limited amounts to other jobs. This leads to a large variety of party customization. 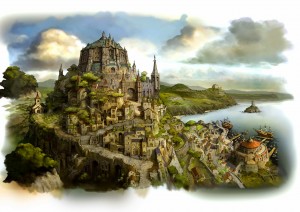 With this game being on the 3DS, no one should expect top-of-the-line visuals. That being said, this game is not rough on the eyes. Each town you enter has a hand-drawn look making that location appear unique.

What may be divisive is the art style chosen for the characters. The way they are rendered makes them look deformed in almost a “chibi” style. Anyone familiar with the DS remakes of Final Fantasy III, IV, or 4 Heroes of Light will know what to expect. It was nothing personally distracting on my part, but I understand others reading this may be put off.

The music is very well done! On more than one occasion I’ve found myself humming the world map theme while at work or otherwise away from the game. A few of the tracks are good enough to make the player look forward to hearing them. Even when the music is not great, it is not bad.

There is voice acting for all major cut-scenes. Some smaller conversations are not voiced, but it is not wide-spread. In general, the quality of the VA is above average. None of the main characters have particularly annoying voices. Ringabel’s voice stands out as the best with Edea’s voice a close second. Many of the bosses have great VA and dialog too, which makes it almost a disappointment to have to fight them.

This is the first game in what I hope is a long series of more to come. This scratches all classic JRPG players where they itch, yet is accessible enough for a newbie to get into. Look out for Bravely Second, hopefully coming out next year.