No Mission Too Difficult 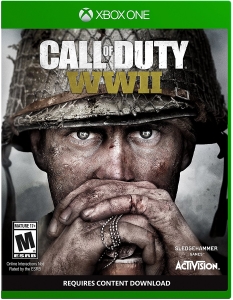 The Call of Duty franchise has a long history. With 17 console entries over 14 years, they’ve proven time and time again they still maintain mass appeal. With the infamous trailer for last year’s Infinite Warfare and the success of Battlefield 1, the announcement for Call of Duty: WWII had some feeling like Activision was just trend-chasing, while others were hopeful for the renewal of a seemingly stagnant giant. I was one of the latter, and with the game in my hands, I can confidently say that, though WWII may not be the greatest game in the franchise, it’s setting the series back on a course down the straight and narrow. 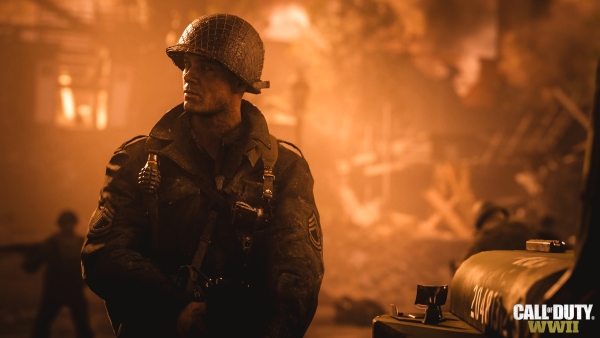 There’s a running theme with a pendant of protection featuring Saint Michael the archangel. Beyond that, little spirituality is mentioned in the campaign. As for the zombie mode, there are a ton of twisted, undead creatures. There’s a heavy evil influence implied.

Call of Duty: WWII is steeped in violence and the harsher points of war. There are beheadings and plenty of gore and viscera in the Zombie mode. There’s a scene with a character getting his head blown off in the campaign. Through the narrative, you’ll see death up close multiple times.

Expect to hear everything an R-rated film would allow, including G** D***, f***, s***, and d***. There are a handful of off-color jokes mentioned in the game, including one bit where a character discusses kissing his Nonna’s bottom-side. 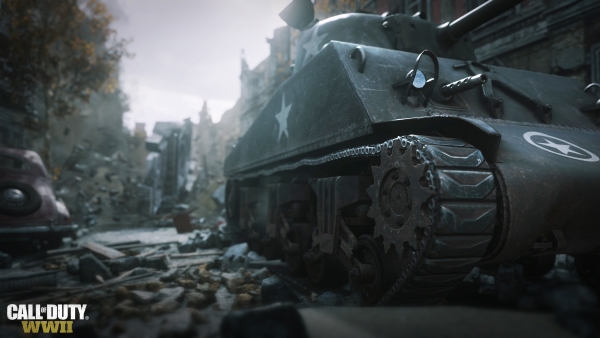 There is nothing suggestive portrayed.

One of your commanding officers clearly struggles with a lot of demons. He gets drunk in camp a lot and goes on abusive tirades, both verbally and physically.

There are a couple scenes with a racist soldier who raises a stink about fighting beside a man he’s racist against. That relationship is redeemed later. There is a scene with a concentration camp and a couple of gaunt and starving inmates who were executed.

Camaraderie, bravery, perseverance, and sacrifice are core themes to the narrative. Family and honor are also mentioned. 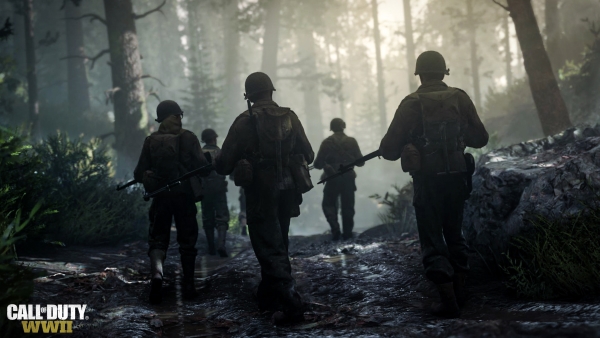 It’s safe to say the majority of Call of Duty‘s fanbase come to the franchise for its multiplayer offering. WWII takes a sharp turn from the direction of the franchise, trading jetpacks and space combat for the shores of Normandy and a trusty M1 Garand, but what does that mean for the multiplayer?

For starters, the core shooting mechanics remain unchanged. WWII maintains great, fluid aiming with solid feedback. At the end of the day, that’s what keeps fans coming back. Class setup trends back toward a classic setup, allowing players to create up to 5 classes. With each class, you’ll select a division (Infantry, Airborne, etc) which offer their own specific perks (bayonets on rifles, longer sprinting, etc). You then get a primary weapon (with attachments), a single perk (like a second rifle instead of a firearm), a secondary weapon, and “equipment” like grenades or mines. They provide enough variety to let players experiment while holding players to a predictable template. 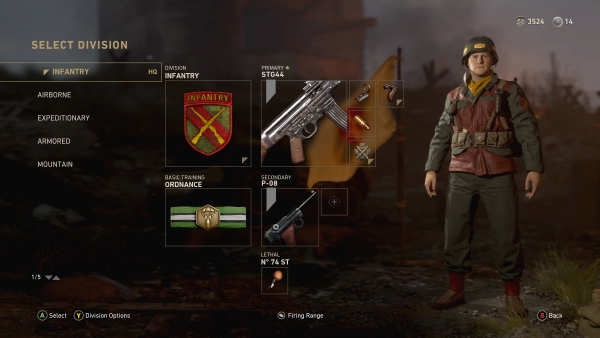 New to the multiplayer is the Headquarters, where, like Destiny 2‘s social space, you’ll pick up daily/weekly missions, open loot crates, and generally goof around with other players. While I understand the decision to deliver this space, it feels largely unnecessary as, from here, you still have to go through a basic menu to queue your squad for a multiplayer match. It is kinda neat to see what calling cards and emotes your friends get from their supply drops, though.

While I think this is handily the most fun I’ve had in Call of Duty multiplayer in several years, it’s not without some problems. WWII had one of the rockiest launches from any game I’ve seen in years, with the servers refusing to work for a day or two after launch. Some maps favor snipers while others feel like you only have the option of an incendiary shotgun. Incendiary shells often feel overpowered and over-ranged while the base shotguns can be hit-or-miss, even from close range. Spawning can, at times, prove frustrating as well. I watched a kill cam during my play time where an enemy spawned just a few feet away from me, only to shoot me in the back as I charged into battle. This needs to be addressed for the longevity of the game. 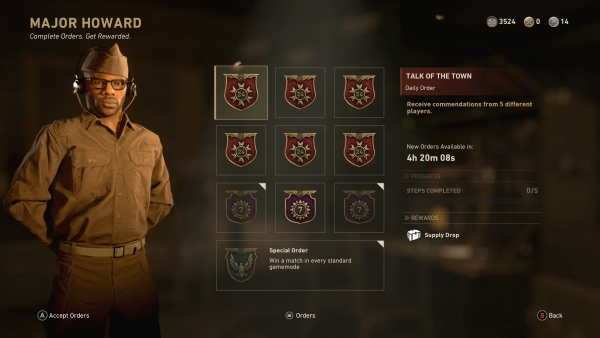 For those few willing to break away from the multiplayer, Call of Duty boasts an entertaining campaign with several of the major touchstones featured in a good World War II story. While I feel it fails to outshine last year’s Infinite Warfare, WWII has a handful of memorable moments, changing things up throughout the tale to deliver a variety of gameplay experiences.

Your squad feels like a familiar, trope-driven group. Daniels, our protagonist, is a farm boy from Texas. He’s joined by a cast that hits several of the usual points: the New Yorker, a commander ravaged by his past, a college graduate that enlisted, and your best friend, a Jewish American who speaks German. 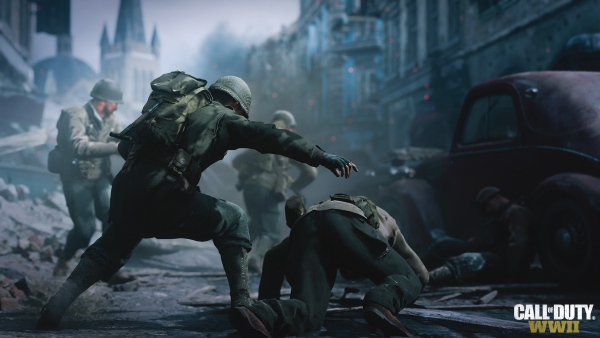 From hitting the beaches on D-Day to the fight eastward, each mission is punctuated by cutscenes that give you a glimpse into the tale of Daniels and the 1st Infantry division. I particularly enjoyed the handful of missions that put you in the role of side characters, giving the player a fresh perspective from our classic foot soldier.

Over the course of the tale, some of the characters will start to grow on you and you’ll hate a few others. Unfortunately, some story beats fall short, as the investment needed for the intended emotional impact just wasn’t there. Still, I enjoyed my time with the campaign and look forward to another playthrough in the future. 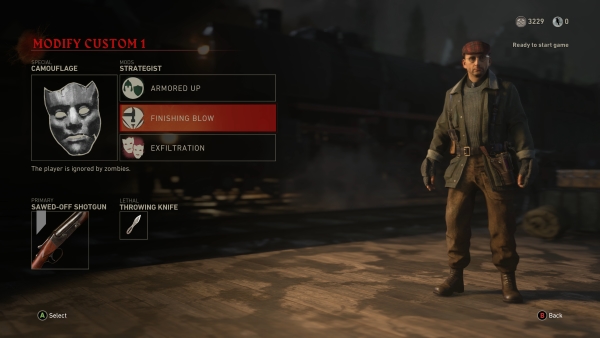 The Nazi Zombies mode has been around as a near-mainstay since World at War hit store shelves almost a decade ago. While most have failed to grab me, WWII‘s offering has proven an engaging, satisfying time. Players will take on the roles of Jefferson Potts (Ving Rhames), Drostan Hynd (David Tennant), Olivia Durant (Elodie Yung), and Marie Fischer (Katheryn Winnick) as they set out to recover stolen antiquities from the German village of Mittelburg. They have no idea what’s in store for them, though.

Where past zombie modes have felt like a slow press to move room to room, fumbling to figure things out as you go, WWII‘s feels like it gives the players more direction. While working area to area, you’re given objectives, which lends a much appreciated sense of focus to the typically-scrambled game. They also manage to throw several horrific new creations at you, including bomb-wielding zombies, flamethrower zombies, and berserker zombies that offer a welcome variety to the horde. While many of the mode’s mainstays are here (purchasing weapons, getting random gear from a mystery box, moving area to area), WWII‘s iteration has reinvigorated the formula for me. 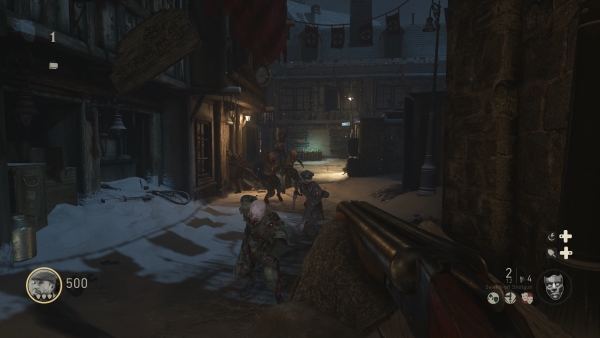 Call of Duty: WWII is a great looking game, especially when viewed in 4K with HDR. All of the character models, both in-engine and through CGI, look impressively accurate to their real-life counterparts. I even mistook a handful of the game’s cutscenes for live action footage at times. With a couple of exceptions, I though the game’s voice acting was spot on. The epic soundtrack offers a great accompaniment to the on-screen action as well. 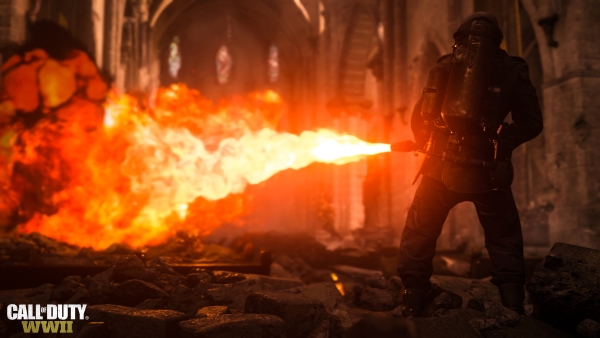 While I don’t believe WWII is the greatest game in the franchise, I feel like the team at Sledgehammer is helping Call of Duty find its way back to the light. The game features a campaign with some memorable set pieces, an improved, addicting Nazi Zombie mode, and a refocused multiplayer element. While there are some issues with the multiplayer I expect to be resolved (like weapon balance, server stability, and spawn placement), Call of Duty: WWII will easily keep fans engaged for the foreseeable future.

Call of Duty: WWII may not be the best in the series, but it does a great job pointing the franchise back toward the light. Nazi Zombies is a blast, the campaign is entertaining, and multiplayer will keep fans coming back for months...and all without those pesky jetpacks.