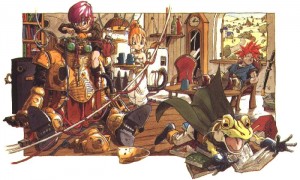 RPGs (Role Playing Games) have come a long way in their decades of existence.  From pen and paper games like Dungeons and Dragons to videogames like Final Fantasy, RPGs are a household name for the average gamer.  The SNES brought us some of the greatest ones ever, and they are still regarded as the best, even when compared to their newer and shinier brethren.  As a child, playing games like Chrono Trigger, Bahamut Lagoon, Breath of Fire, Terranigma, and Secret of Mana (just to name a few) allowed me to fall in love with this genre.  Chrono Trigger is the one title though that sticks out as my favorite, not only because of the story, but also because of the music, graphics, replay value, and character development.

The story starts off with our silent protagonist, Crono, meeting the princess of Guardia, Marle.  She wanted to have some fun at the Millennial Fair to get out of the castle, but they (and Lucca, Crono’s best friend) end up going back in time because of Lucca’s teleport pod invention (which actually opens a gate through time because of Marle’s pendant).  This accident eventually leads them throughout different time periods of their world, meeting different characters and helping to stop the plans of a monster wanting to rule over a kingdom. 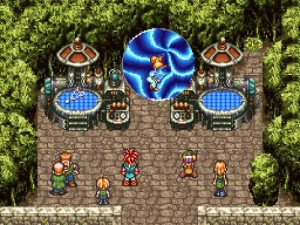 They end up going through another time gate to the future and discover that a monster from space named Lavos rises from the ground in the year 1999 A.D. and destroys most of the world.  Their resolve is to stop that from ever happening and put an end to Lavos. They begin to travel throughout different time periods to find a way to stop it from ever bringing destruction to the world.  As they jump from one period to the next, they join the adventures of other heroes from the past, present, and future, together finding a way to stop the end of the world before it’s too late.

It’s a very engaging plot, and there is so much to do in regards to side-quests–better weapons/gear, adding a special character to your roster, changing the outcome of NPC’s stories, learning more about the history of the CT (Chrono Trigger) world and even a New Game+ which lets you play the game over again with the same levels, techs, and equipment after beating the game!  This helps you finish the game quicker and see the other nine endings (there are ten total). 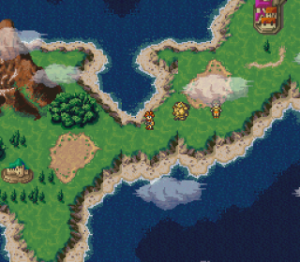 The gameplay is similar to most RPGs, classic and modern, where you get into a random fight with an enemy, except here you actually have to “bump” into the enemy to fight it.  Most fights can be avoided, but some cannot.  You can use techs which can be combined with other characters to do a sort of double or triple attack which inflicts heavy damage.  Magic and other weapon skills are also available in your arsenal against enemies, and the typical potions, heals, and status effects are present.

You can time travel, which is really amazing and rarely used in games.  Even Final Fantasy 13-2, which had a time-traveling aspect to it, got that idea from Chrono Trigger.  Jumping around from one era to the other affects your ending, and even the development of the world, which gives you some control over how the game evolves.  This can be frustrating though, because if you miss a certain event at certain points in the game (or even decisions which you can make throughout the dialogue) it will change the entire game’s outcome.  Without a guide, it’s difficult to know when, where, and what do to in regards to these changes because there aren’t many clues.

You’re allowed to play with three characters at once, and their dialogue is unique to every situation in the game.  Every fight is done with the Active Time Battle (ATB) system, which is time-based.  If you’ve ever played Final Fantasy 7, then you’ve experienced this system before.  You have to attack once your gauge is full, and the enemies will continue to attack you until they are defeated.  The fighting can be tedious and grinding after a few hours into the game, and you will eventually just be clicking a button over and over to get it over with. It’s necessary, though, because bosses can be difficult, even at high levels, so be prepared for a challenge. 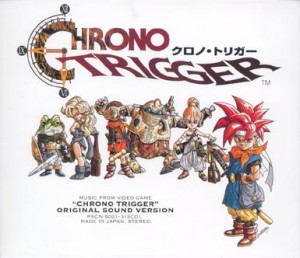 Chrono Trigger has one of the most memorable soundtracks in videogame history.  Not only has it been featured in various live, orchestral concerts like Play! and Video Games Live, it has over 700 remixes, including a fully-remixed album by OCRemix.org called Chrono Symphonic.  From the memorable “To Far Away Times,” “Frog’s Theme,” “Wind Scene,” “Corridors of Time,” and the orchestrated versions of the PS1 re-release are some of the best tracks.  You can purchase the whole OST here on Amazon.  Each track displays the feeling of the time you are in, the difficulty of the battle, or the emotions of the moment.  You’ll be taken into the world of Chrono Trigger by it’s music.

There are some violent scenes, but nothing gory or bloody.  There is death present in the game, since we do see the fate of several characters, but, again, nothing explicit.  No foul language or sexual content is present, though one of the enemies seems to be a girl that is actually a guy; that’s as far as it goes. 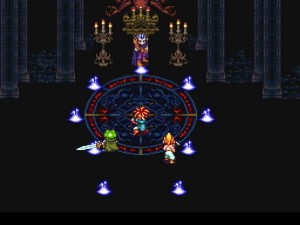 I recently watched a video by Game Theory on how Chrono Trigger is related to the Bible, and even that Crono is a type of Christ.  It is VERY convincing and I do believe that the Bible was used as a source for the story of the game.  Before I list some points that the video brings up that I myself believe are accurate, I will say that there is a scene in a church and talk of an “Entity” that seems to be guiding the characters in their journey (this is later explained to be the planet itself, as if it is a living thing).  Magus has a scene (to the left) that looks like a ritual, and magic is used throughout the game, but, again, nothing touched upon in regards to Christianity, God, or any other religion.

Now, to list off the points that the video does mention.  These are the points that I personally agree with, though there are a few other ones that I think are just farfetched and happen because of influences that the creators of Chrono Trigger used  The video is about 11 min. long and you need to have played the game to truly understand what they are talking about:  *SPOILERS BELOW!*

To me, Chrono Trigger does touch on religious beliefs, but doesn’t explicitly mention any or cross the line into blasphemy.  In fact, if you aren’t a Christian (or even if you are) you probably won’t notice any of these instances at all!  I know I didn’t, and I have played this game at least 4-5 times from start to finish.

I absolutely love the story of Chrono Trigger, and I have even had hour-long conversations with friends who have also played it, just to make some sense of the whole plot (including Chrono Cross, the direct sequel).  Some plot holes (though minor) are left open, and these leave you wanting more.  Chrono Trigger will forever be one of the greatest games ever because it brought together some of the brightest minds in gaming in Japan.  Give it a try. It’s on almost every console (Wii, PSN, Nintendo DS, PC, Android, and Apple Mobile). You will not regret it.

Is Chrono Trigger your favorite game?  Did you ever play it, and, if so, what did you most enjoy about it?  Was the story confusing, or did any parts just not make sense?  Share with us below, and let’s talk about it!

God bless, and thanks for reading.

This is arguably the greatest RPG ever made--some even say the best game ever made. Chrono Trigger trail-blazed many modern aspects of video games with its stellar soundtrack, memorable characters, and engaging plot. Pick this one up if you've never played it and join the millions who've already had this great gaming experience.