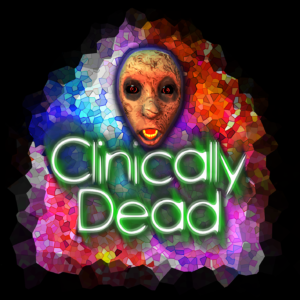 Games have tackled the idea of a world inside someone’s mind in a myriad of ways. It’s a setting that allows for a great deal of creativity. Psychedelic colors and mind-bending physics abound. It’s a fascinating idea that offers many possibilities. Clinically Dead takes this concept and combines it with the one subject that has fascinated mankind for millennia: death. What exactly are the last few seconds inside a dying mind like? And, less importantly for philosophers but more importantly for us geeks, does it make a good game?

Spiritual Content: Unsurprisingly given the title, Clinically Dead takes place during the last few seconds of the main character’s life before he passes on. The game approaches this topic primarily from a mundane, physical perspective. Any spiritual aspects of death are left vague or entirely unexplored.

Violence: You can defeat enemies in some levels using certain throwable projectiles. Apart from falling like ragdolls, the violence against these enemies is hardly graphic.

Sexual Content: The male main character appears to be naked throughout the game, or at least wearing nothing on his upper body or feet. There is no sexualization of this as it is a logical condition to be in after the vague accident and subsequent hospital treatment.

Drug/Alcohol Use: At the beginning of the game a nurse or doctor directs you to drink some form of medication. They do not clarify what the medication is very well, with any answers they give being very dismissive. They also show a great deal of aggravation if you attempt to ask too many questions about it.

Positive Content: Clinically Dead takes a fairly healthy look at the process of dying. While it introduces some doubt for dramatic effect, the game generally promotes the idea of letting go of over-attachment and allowing yourself to peacefully move on to what comes next (even if it’s vague about what that is).

Upon opening the game, Clinically Dead pushes you right into its story without even giving you a title screen. This is a very subjective design decision that many probably won’t agree with; I’m sure many gamers would appreciate a visually impressive title card, but I found it refreshing that the game gets you into the actual gameplay as soon as it can. After a brief period of time in the “real world” to establish the situation, your hospitalized character begins to flatline and you are plunged into the world of your mind. 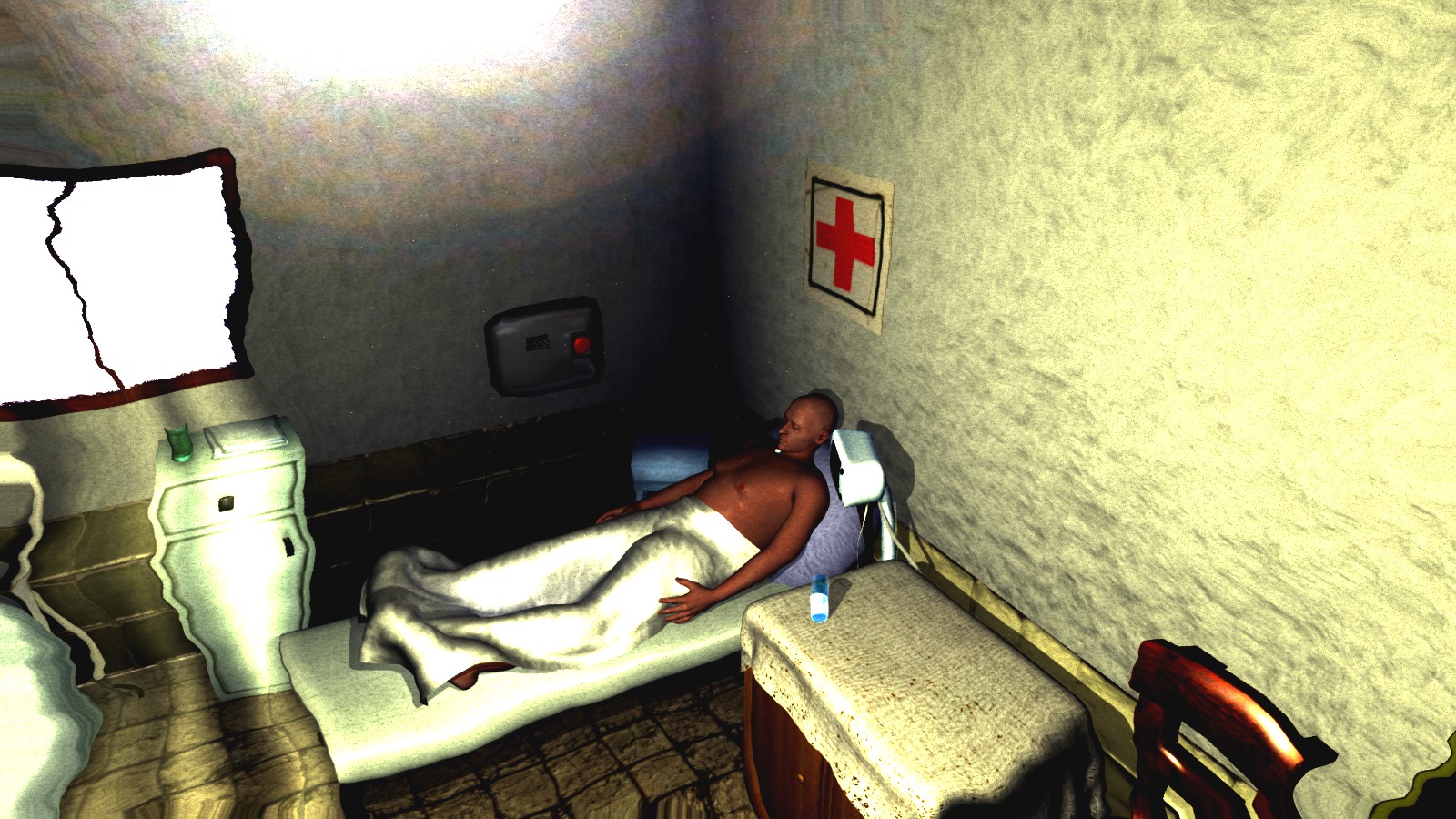 This opening showcases some of the weaknesses of this game. The voice acting is stilted and artificial sounding, while the model for your character sits right in the uncanny valley. However, once the game itself properly starts up it does a great job of turning these weaknesses into strengths. In your mind, enemies you encounter are intentionally unsettling. The voiced dialogue from both them and your subconscious guide is distorted. Here, these elements which made the game look off in its opening now add to an otherworldly and somewhat disturbing feel. 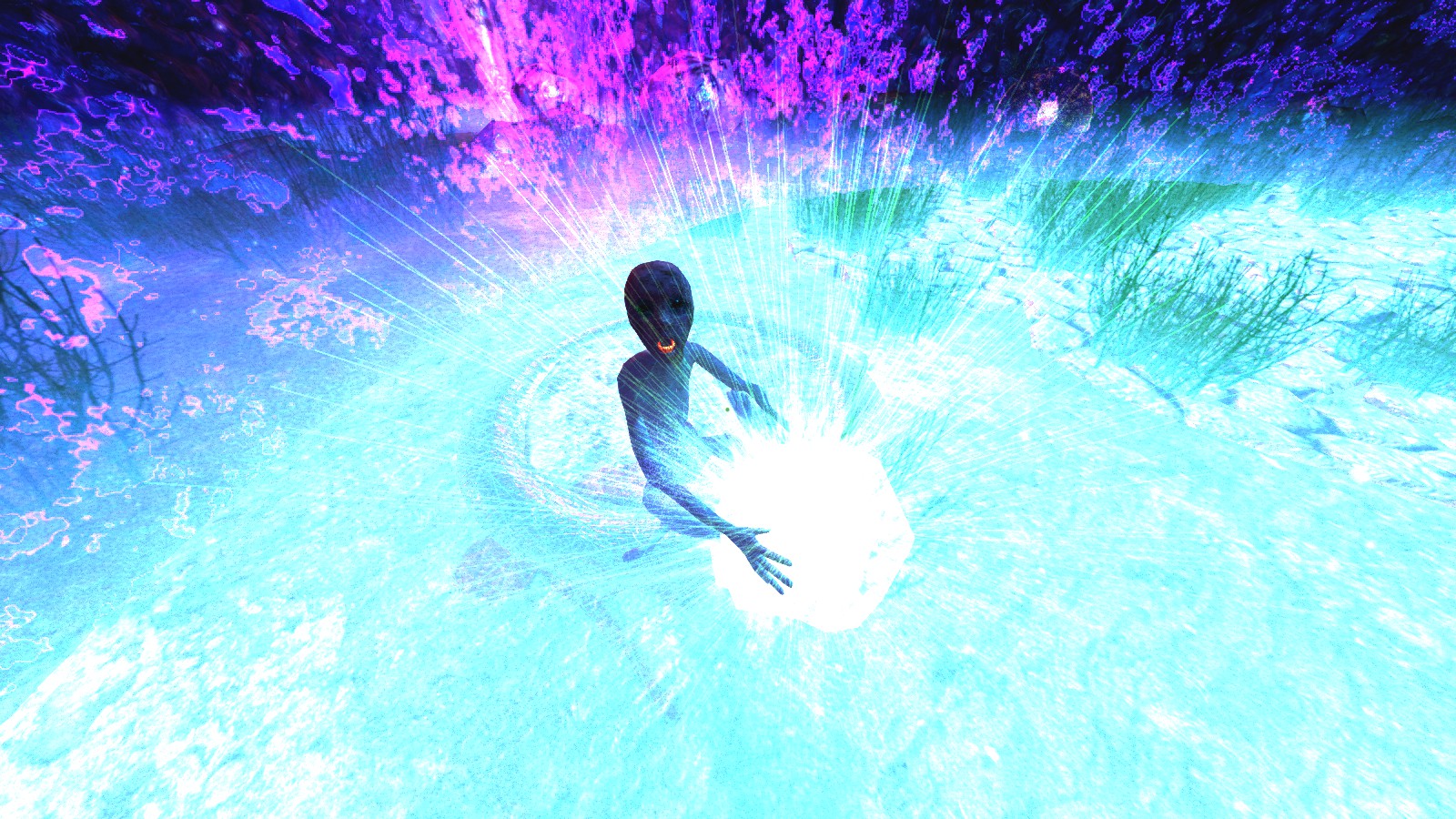 The environmental design also helps maintain this atmosphere. The basic idea of taking place in various cavernous spaces remains pretty much unchanged throughout the game. However, there is enough variety between levels that this never feels stale. On top of this, your surroundings also look vaguely organic. You could easily mistake the textures on the walls for the folds of grey matter in your brain. Platforms often resemble bones, and the yellowish fluid you must sometimes avoid falling into could easily be something found in the body. Overall, it creates a distinct visual look for the game that feels appropriate for its subject matter. 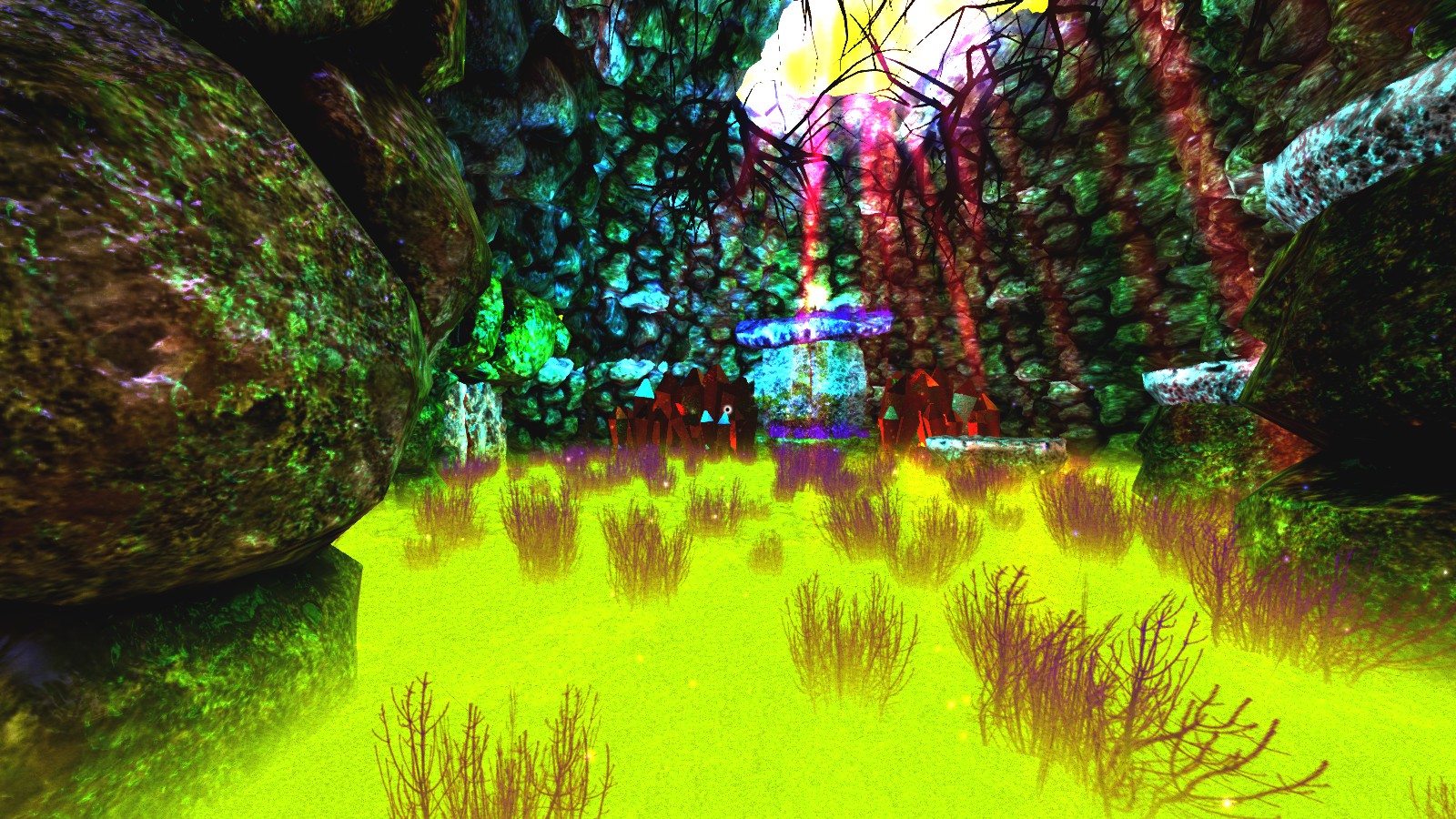 Your goal in Clinically Dead is simple in concept but still quite creative. The whole game takes place over the course of 30 “real world” seconds stretched out in the protagonist’s dying mind. Each second is represented by Time Crystals, and you must collect all of them to progress the flow of time and finally pass on. Each level contains at least one, sometimes separated out into multiple pieces. Collecting them allows you to move time forward in the main hub world, allowing you to go to new levels.

This concept of the altered flow of time is integral to the game. The key to solving the puzzles you come across is manipulating time, moving it backwards and forwards to alter your environment. Just like with its levels, the game takes this single concept and uses it in a variety of ways. Sometimes you have direct control; you can move backwards and forwards in time with the push of a button. In many cases, though, it’s not that easy. Many levels tie the time to your location. Like a weather map, the level shows you areas of “high time” and “low time” with colored areas. In these levels, you must use your own position to manipulate your environment, sometimes while dealing with enemies as well. 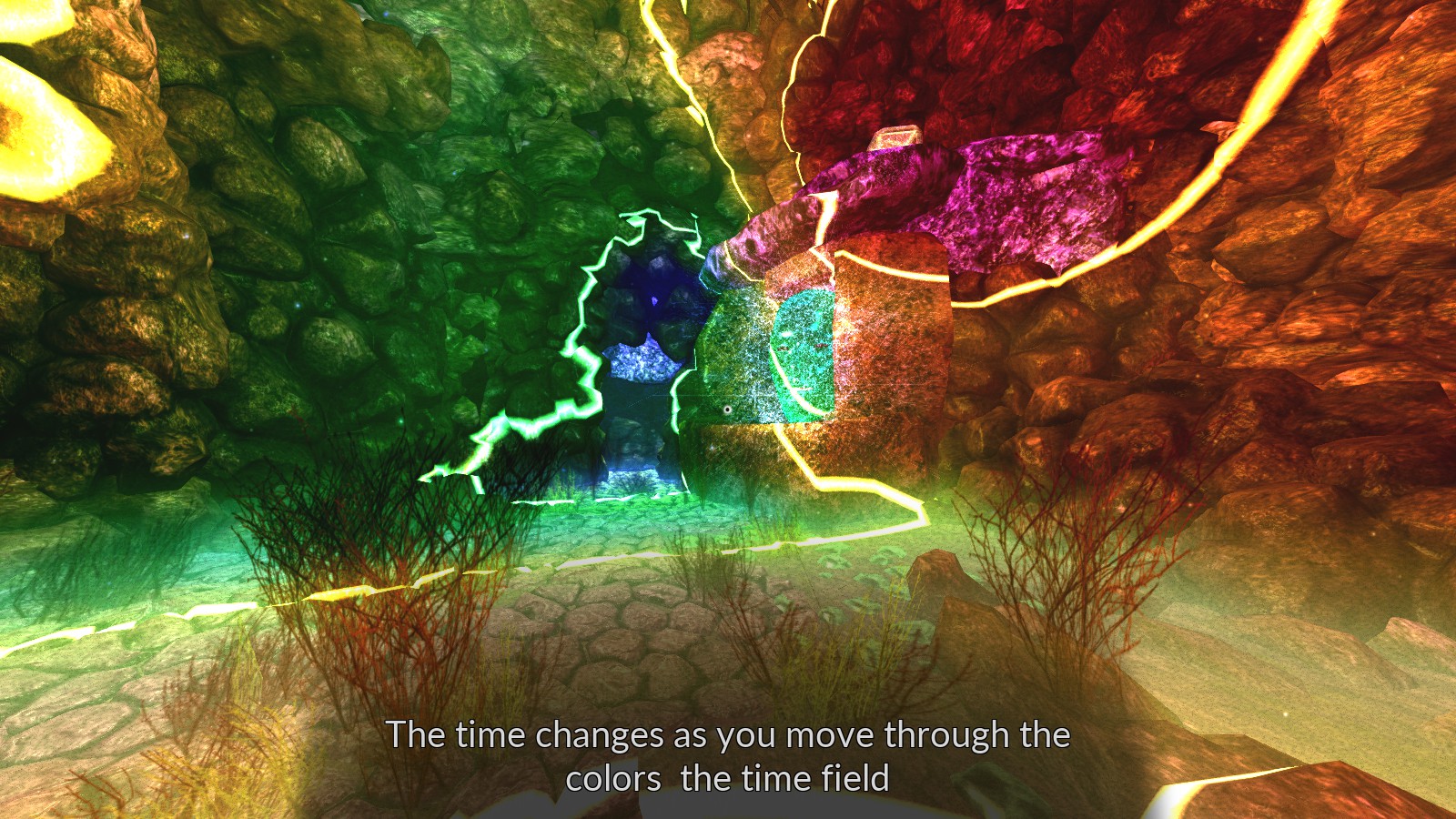 It can be a difficult concept to explain in words, but Clinically Dead does a great job of introducing these ideas bit by bit. There is never a level where you don’t understand the basic idea of what to do. It’s simply a matter of figuring out the puzzle of how to do it. Using your logic and platforming skills you should never be at a loss for what to do.

For all its design and gameplay strengths, however, Clinically Dead does have a few glaring weaknesses that bring down the experience. While it does do a good job of making its sometimes stilted voice acting work to improve the atmosphere, that does nothing for the actual content of the dialogue itself. The grammar of spoken English in this game can be very poor. While it’s understandable given it is an indie game from a creator who speaks a different language, that doesn’t stop it from being distracting at times. 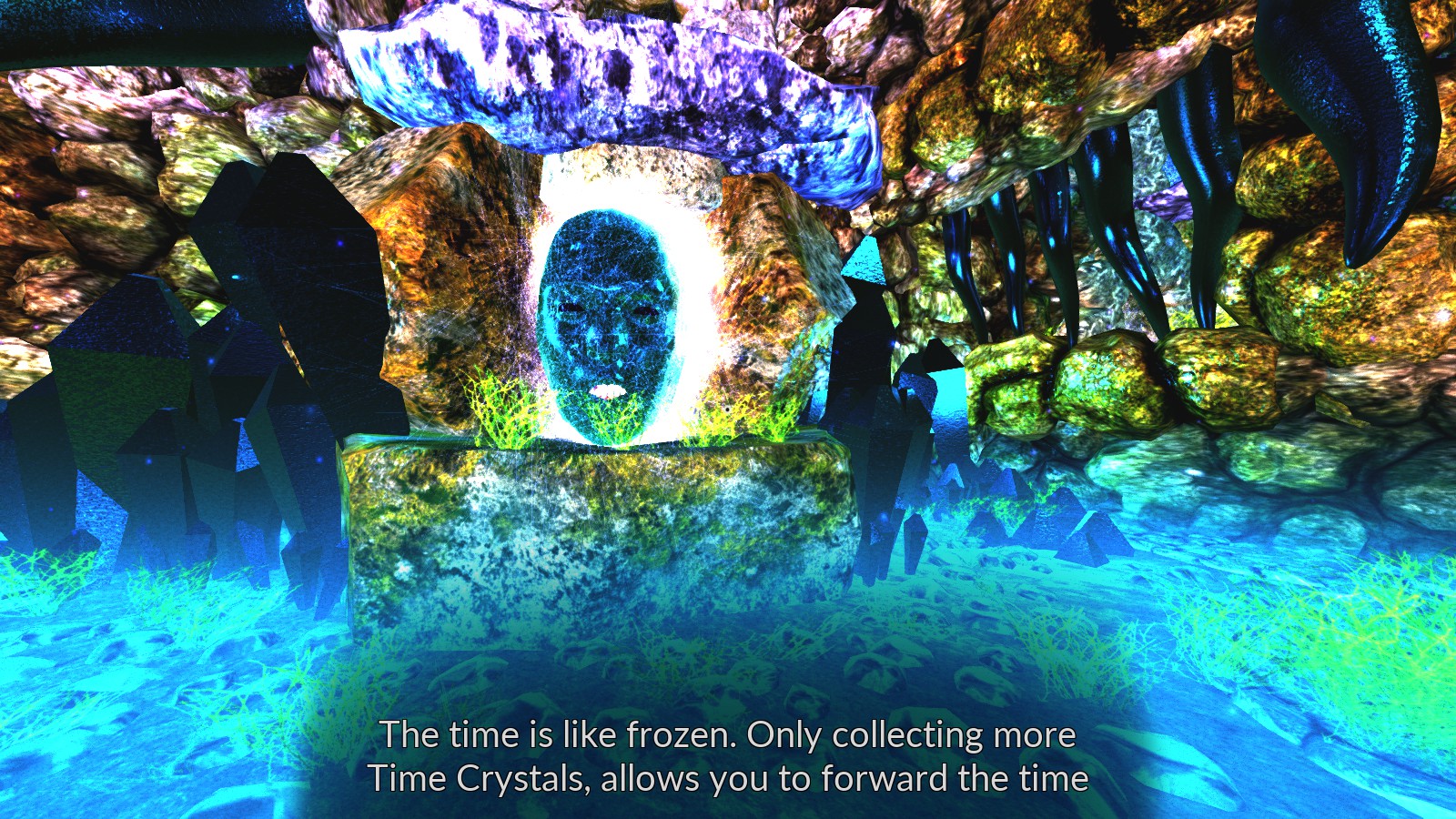 There’s also the problem of the game’s ending. For the most part, it’s actually fairly good. The levels leading up to it ramp up the difficulty and pace suitably, making it feel climactic and earned. The problem comes from the fact that the game seems to imply there are two ways this could end: either letting time progress to the end of the last thirty seconds and passing on or pushing it backwards to before those thirty seconds to avoid your death entirely.

However when the end comes there appears to be no way to actually choose, or else the method is so obscure that I ended up giving up and going for the “default ending”. Perhaps the other ending was a bad one, but the game implied it existed. It seemed like the game was taking away my agency by not letting me pursue it. This left a sour taste in my mouth upon finishing what was otherwise a good indie game that made the most of its limitations.

Clinically Dead offers great ideas that are mostly done very well, but it's plagued by a few major missteps that drag it down from being the truly great experience it could have been.