Ark without the dinos 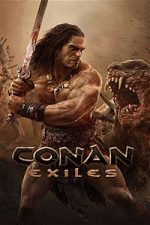 The original Conan the Barbarian is a movie that is a family favorite of mine—one of those movies we have watched on many occasions, especially my brother and me. We have consumed whatever type of Conan media we can, from an old animated cartoon I watched back in the day to a series of graphic novels. I was hoping that Conan Exiles would be the game that finally hooks me into the survival genre.

The survival genre and I have had a rocky relationship. I’ve enjoyed games like Don’t Starve, and have put dozens of hours into Minecraft and Ark: Survival Evolved with my friends. 7 Days to Die was a survival game I absolutely couldn’t stand and so many hours into Ark left me never wanting to return to the genre ever again. Nevertheless, games like Subnautica are legitimately attracting and always have me thinking whether I should dip my toes back in again. Conan Exiles is a solid addition to this genre that I have enjoyed on many levels, but I’m still not hooked hooked me in.

Spiritual Content: A gameplay mechanic important to Conan Exiles is the use of religion. There are a handful of gods that represent various forms of belief. Two of them are the closest possible representations of God and Satan, while the others are meant to represent cannibalism and cultist beliefs. Note that the cannibalistic religion likely involves sacrificing parts of a dead human body to an alter. Players have the option to build altars or shrines in order to gain bonuses for their character and bases. With these shrines and altars also comes the option to summon a spirit avatar that can aid in defending a player’s base. This aspect of the video game is totally optional and players are not required to utilize the gameplay mechanic

Violence: Character creation occurs with the player nailed to a cross. This is not done in any sort of spiritual context, and simply a device of torture for the exiled character. A sign is also nailed to the player character’s stomach that tells why the character was exiled. The sign is actually randomly generated and doesn’t mean anything beyond that point, but various heinous crimes do appear on this list. Players have the option to chop up a human corpse and acquire parts from it. It is possible that players can also consume these parts in relation to the Cannibalism religion. Know that I did not actually try this for myself, but players should be aware that this is an option within the game.

Conan Exiles contains an important focus on combat. Players must craft various weapons to hunt creatures and battle enemies. During combat, puddles of blood can be spilled from an enemy. Enemies and other players can be chopped in half or have limbs cut off of their bodies when a bladed weapon is used. Dead animals with spilled entrails can be seen throughout the world when players travel throughout the various areas of the in-game world. 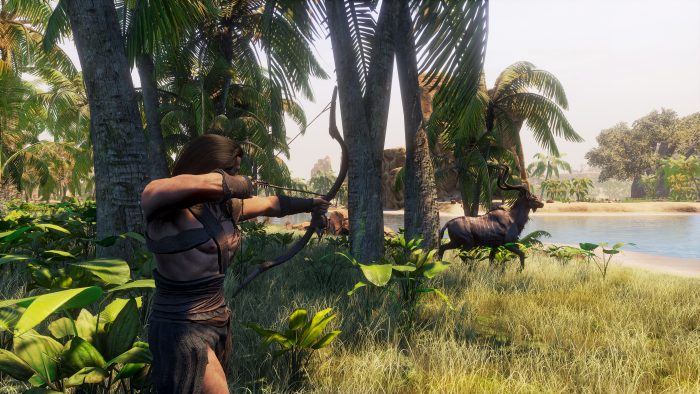 Drugs/Alcohol: Players have the option to craft and consume various kinds of alcohol. Upon consumption, the player character will get drunk.

Sexual Content: The console versions of the game have options for none or partial nudity. The partial nudity option means that the female player character and enemy characters will be in the game with fully exposed breasts. Not included on the console versions but available on the PC version is a full nudity option. This means that players have the option to start off with no clothes at all whether they are male or female. Male characters even have penises—full frontal male nudity rarely appears in most video games.

Other Negative Themes: Players have to option to recruit “Thralls” to serve them within their fortress and various tasks. Thralls are pretty much slaves. Players must knock out an enemy and then bind them. A “Wheel of Pain” can also be built to punish them until they are willing to work for the player. This mechanic is completely optional and players do not have to engage in it.

Conan Exiles takes place in the world of the Conan the Barbarian. It is set in a fictional “Hyborian Age” that takes place after the destruction of Atlantis and before the creation of the known civilizations. This is considered to be a fictional alternate timeline and falls in the category of low fantasy. When a player spawns into the map, they have the option to go anywhere they want and explore the various biomes of the world. Most will spend their beginning hours in the desert and along the river. Other biomes include snow, jungles, tundra, volcanos, and even a barren unnamed city. Exiles has been one of my favorite worlds in the survival genre to explore due to the variety in environments.

The main gameplay loop is that players must build massive fortresses and defend them from attacks of enemies and colossal creatures. This is a hook that I was particularly not interested in; I appreciated the fact that I could adjust the difficulty and turn off the purge mechanics and enjoy my time in this world. I also chose to play singleplayer and co-op PVE with a friend. Playing on a server where someone can instantly destroy all of my work is not appealing at all. I greatly appreciate that there were enough options here for players like myself to play the game however they wished to do so. Other games in the genre have been good at doing this; others should honestly be taking notes from Conan Exiles. 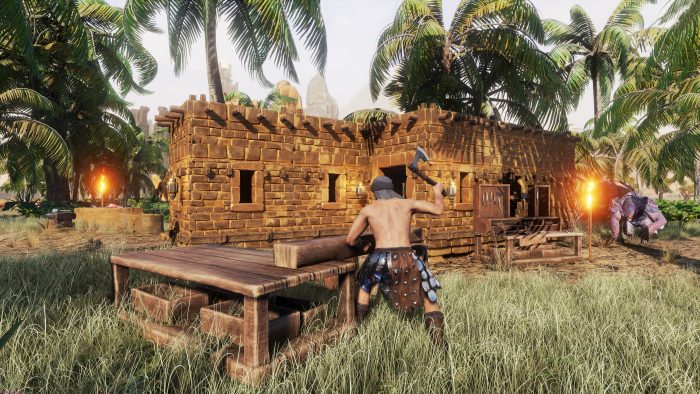 Crafting things works very similar to Ark: Survival Evolved. As I leveled up my character I was able to put points into stats and skill points into learning how to craft specific items. I appreciated this style of progression in Ark, and it translates well here to. All it takes to level up is to keep battling, building things, and surviving. It gives me something to work toward instead of simply living in the game world. The grind may be lengthy, but it serves well in a game like this that needs to keep giving players something to do and work towards.

What I appreciated most about Conan Exiles is that is has an emphasis on combat. In most survival games the combat feels fairly standard. Conan Exiles encourages players to make a variety of weapons, armor, and shields—it was fun to discover which suited my playstyle. Most weapons actually inflict the kind of damage we would expect them to. Blunt weapons can cripple enemies while bladed weapons can chop limbs off. I enjoyed wielding the raw power of two handed weapons and swinging a large two handed broadsword like Conan himself, or smashing my enemies with a large hammer. Combat works like many third person action games do right now, with a lock on button, stamina, and a dodge button. This current style is what most favor these days, and it makes for some intense battles here too. 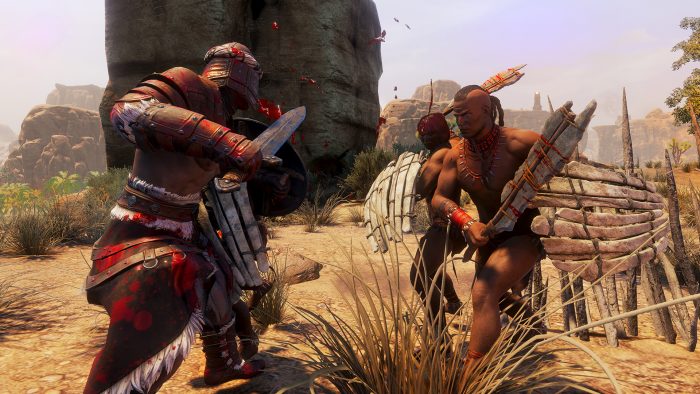 As I said before, my time in Conan Exiles was spent exploring, battling enemies, and hunting creatures. I was very happy to see that there were NPCs in the game. These kind of games are usually barren in single player modes because they want people to play on servers. With Conan Exiles I never felt pressured to do something I didn’t want to do. During my survival and exploration I would sometimes run into other exiles and camps full of tribesmen. What makes the battles worth it is that they might drop something you haven’t crafted or don’t know how to yet. I found a shield made of bone and a bow from a few of these battles, and they ended up becoming important parts of my arsenal.

The time I spent playing with others in Conan Exiles was mostly enjoyable. A friend and I spent some time collecting resources and exploring the world, and things seemed to run fine aside from some hiccups in the frame rate which can be common when playing solo. Playing these games cooperatively always makes the experience much less lonely and makes the process of crafting and building that much more entertaining. My only wish is that there was something more to the game than run of the mill survival gameplay. 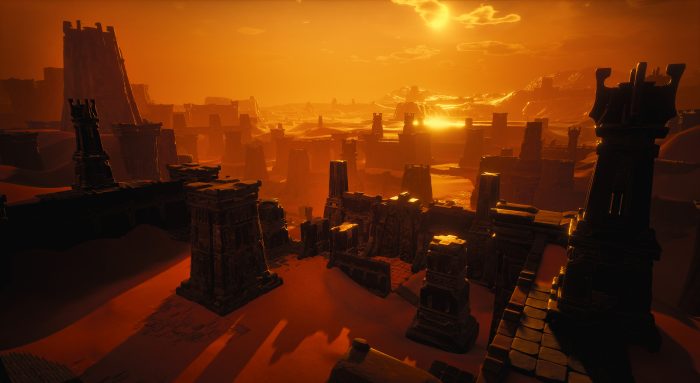 The biggest setback that Conan Exiles faces in that it doesn’t have much of a personality. An important part of survival games are usually the aesthetic. I keep making comparisons to others in the genre, but Conan has to have something that makes it stand out from the rest—and it really doesn’t. Games like Don’t Starve, Subnautica, Ark, all have some kind of style that make it stand out from the rest. Conan doesn’t have a unique art style or is set in some kind of world full of wonder. I may be a fan of the Conan property, but more for the stories that are told within it. For that reason, there are many other titles in the genre I would recommend before thinking about this one.

I did enjoy the time I spent with Conan Exiles; unfortunately there isn’t enough here to keep me going in this world. After a few hours I would find myself getting bored or even falling asleep in my chair in some cases. I appreciate the fact that the survival mechanics were simple enough for anybody to get the hang of. With that comes plenty of options for players to play however they want. The visceral combat is what I enjoy most; that intensity of battling large creatures and enemy tribes is something I’ve never gotten out of a survival game until now. Conan Exiles sadly lacks a unique aesthetic or gameplay hook that makes it stand out from the rest—it largely feels like Ark without the dinosaurs. There are others in the genre I would likely recommend before you turn your interest in this direction.

Conan Exiles is one of the more polished survival games out there. The exploration and flow of combat is some of the best in the genre too. I just wish I had more personality to make it stand out from the rest.