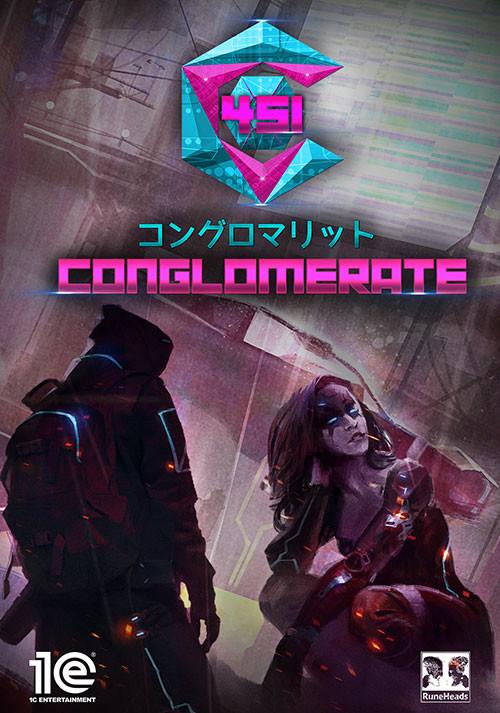 I can admit when I am wrong about my initial impressions about a game. In the case of Conglomerate 451, the final product is a much better game than the one that I played in early access (see my preview article). The developers at RuneHeads took all the elements that worked in the early access game and really expanded them. Some of the changes involved management systems and others simply involved adding an NPC to the department menus. It’s clear that they spent a lot of time perfecting the game before releasing the final version. Conglomerate 451 combines some of the best elements of cyberpunk games like Syndicate with dungeon crawl RPG parts of Might and Magic.

Conglomerate 451 takes place in a gritty, dystopian cyberpunk world where disposable human clones become cannon fodder. The brief description above should tell you most of the content in this game will be dark and gritty. I agree that the game is dark (as in there was low lighting), but overall, I felt I could recommend the game to teens and adults because it’s not that gritty. I believe that Conglomerate 451 would get a T for Teen rating. Violence is present throughout the game, both in the mission that the player sends the clones on, to reported violence from rioters in the city. The violence displayed during the missions is not bloody, and the game displays most of the attacks as bright neon color patterns. There is some gunplay when the enemies attack the player’s clones, but again displayed as neon color patterns. Conglomerate 451 displays brief nudity during the clone creation sequence. The clones get printed inside of a clear tube, and the player sees the female clone’s bare chest briefly when printing is done. Also, the clones go into a regeneration tank to heal where they are again naked, but the player can see just a blurry outline. It disappointed me that these parts of the game stayed in from the early access, but they are very brief.

Conglomerate 451 introduces the player to the world by throwing them into a mission from the start, which is a significant way to give the player a quick tutorial on the way to run a mission. After the mission, the player gets to create a new agency—I name mine Tyson—which is working for the president to take back section 451 of Conglomerate city controlled by various corporations. The player walks through how to create clones and equip them for a mission as the last part of the tutorial. The game allows for two play styles, one being a timed story and the other an endless battle between the player and the corporations. The game contains two sections: managing the agency, and commanding clones during a mission. The management side comprises creating clones by picking their DNA, class, and skills. Similar to other games, it requires research to improve technology or to find new DNA strands for clones. One improvement to the game in the management phase is the inclusion of NPC department heads with which you can interact. It’s very minimal interaction, but I found that putting a face to the department helped me feel more immersed in the game. Another feature I like about management is the easily customizable clones. Changing skills and upgrading equipment is a breeze. This customization becomes very useful when picking a team to go on missions, which I will cover later.

The second half of the game begins when the player goes to the situation room to select a mission. There are always several missions to select from; each includes a target corporation and a section of the city where the mission takes place. Each time the player successfully completes a mission, they gain influence in that section of sector 451 and the corporation loses overall influence in the city. As the player gets further along in the game, missions target multiple corporations. The hard missions will all but require more experienced clones. The player selects three clones to go on each mission, which is a big decision. I found that balancing out the team between the attack, defense, and support classes is very important to having a successful mission, and so customizing the clone’s skills after I create them comes in handy. If I needed support clones with more attack skills than defense skills I could make that, or if I needed a hybrid of defense and attack skills, I could make that as well. The clone’s equipment can be fitted with mods that boost their stats. The clones can have their bodies augmented with cyber limbs which also can be modded. The ability to create a clone team to fit my needs really kept me invested in the game. Conglomerate 451 looks good, but lacks high-quality textures and details. I noticed some problems with the animation for the enemy units when they move, in that they sometimes would freeze and spring up in another place. I also noticed that when enemies die, they would disappear, but I could still see a simmering outline of the enemy standing in the same place for a few seconds. I wish that they had changed the music from the Early Access phase to the final version; it got old quickly after several hours of gameplay because there are only a few tracks that just play repeatedly. Instead, some voice-over plays during the opening sequence, and the developer added an annoying drone that speaks nonstop during the mission. I am glad that the developers took the time to add things to the final game such as the NPC department managers or the customization of clones. I thought the Early Access version of the game was ok, but I didn’t foresee me playing it beyond a review. Conglomerate 451, the final release, really sucked me in which made me rethink my original assumptions on the game. I think this game is worth picking up, and I look forward to future games from these developers.

Conglomerate 451 is a great cyberpunk dungeon crawler with fun resource management and gameplay.