Wren and Reynold are two young kids who love Halloween, but the two find out on Halloween night that their dentist, Dr. Orel White, has taken over the world in the future. They make a plan to rescue Halloween, candy, and humanity before it’s too late! You must fight through various enemies and obstacles, and suit up in different Halloween costumes to stop the dentist’s plot

I found the game was very kid-friendly, the jokes are funny, and the action is minor. No blood, gore, foul language, or anything to worry about from a Christian perspective or if you’re a parent looking to get your child an enjoyable but safe game. 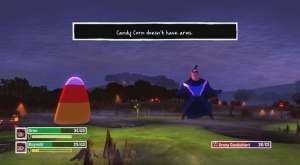 There are witches and wizards in the game which do cast spells. Halloween is the main focus of the game, so that may be an issue for some audiences. There is a bar in the New Orleans area, but no drinking is going on.

The only thing I can highlight here is there are spells, wizards, and witches throughout which look kind of dark and spooky. They show markings on the ground when they cast spells (similar to FullMetal Alchemist) where you can see different occult symbols. It’s not a heavy theme in the game, but it is something you would want to be aware of.

Okay, this is where Costume Quest 2, and I don’t get along too well. I personally don’t enjoy long battles with enemies, as I would much prefer to continue the game and see what happens next. The battles are a little challenging until you get the hang of it, because you have the option to block enemy attacks in real time. If you don’t tap the block button at the right moment, be ready to take some serious damage. The turns are a little slow, but as you grow stronger the battles go by a bit quicker, but not enough for my liking.

The story is fun and silly, which fits this game perfectly. In regards to controlling your character, the menus look like they were drawn by kids which is cool, and the controls are very simple. It’s not a tricky game to understand so you will be flying through missions in no time. You can run as well to speed through the game a bit. 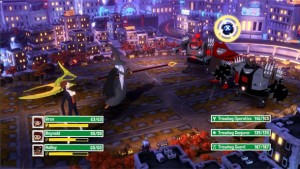 Here’s what I really like about this game. The presentation itself is great. The graphics, colors, battles, and even the backgrounds (see image to the left) look fantastic. Depending on where you are, the battles will show that corresponding background which is always nice when games do that. The costumes looks cool, and highlight different popular characters children dress up as on Halloween–except Candy Corn. Who dresses up as candy corn?

The characters look unique and stand out. It’s fun to see the interactions between each of them and even the enemies.

Music and sound effects work well when you are in different places, like when you hit an enemy, you will really feel that you whacked them!

To conclude this review, I did enjoy playing Costume Quest 2, but I would have liked it much more if I was younger. It’s definitely aimed for another audience than me, but it is a fun game. The long battles bore me to no avail, but I was engaged with the graphics and fun of it all.

If you enjoy a nice, yet short, Halloween quest to save the world, this is the game for you! Be sure to pick it up on Steam, PSN, XBOX, Wii, and other gaming outlets.

It's a great game for a younger audience who wouldn't mind the slowness to it, but for those who are used to instant gratification games, this is not for you.