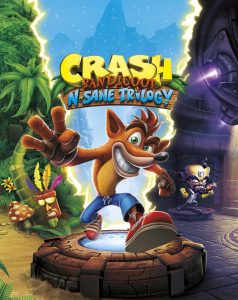 We all thought he was gone, a warm memory ingrained in our childhood. But Sony has continued its trend of remasters and has finally uncovered the long-rumored re-release of the old Crash Bandicoot games. Crash Bandicoot, Crash Bandicoot: Cortex Strikes Back and Crash Bandicoot: Warped have all been given a complete makeover, while keeping the core gameplay. The game was met with open arms, instantly becoming a top-seller. While it’s been a huge success, some would argue that the game is very different from its predecessor, stating that it is harder than the original games.

Yes, it may be a bit different, but the Crash Bandicoot games were solid and they continue to be solid in these remasters. Be prepared to practice good self-control, or else be prepared to buy a new TV. You’ll want to “rage quit” and put an ax through your screen. The difficulty is still high—it’s just in HD now. Meanwhile, enjoy vibrant, lush environments, smooth frame rates, and updated audio effects. The voice lines have been re-cast and updated, adding the fantastic voice of Lex Lang as Dr. Cortex. Cutscenes are new and a few have added sequences that give the story a little more continuity. Even if you have never played the Crash Bandicoot games, you’ll be entertained—for better or worse. 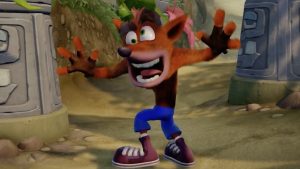 Don’t lie, you missed this.

Spiritual Content: There is very light spiritual content in the Crash games. During one of Crash’s deaths, he turns into an angel and flies upward (probably to heaven). It’s all in good fun and there is no harm in the joke. In the games, there are two masks: Aku-Aku and Uka-Uka. They are representative of spirits who guide Crash and Dr. Cortex throughout their adventures. Aku-Aku is protective over Crash, but Uka-Uka’s goal is to enslave the world by using Dr. Cortex.

Violence: Cartoon violence is prevalent. Some of Crash’s deaths are a bit abrupt, including him blowing up or being sliced in half, but there is no blood and they are not graphic in nature.

Language/Crude Humor: There is no language—the only words Crash ever speaks in the game are “Uh oh.” In terms of crude humor, sometimes you will see enemies with their “plumber’s crack” showing. In one death, an enemy slices Crash’s pants off and Crash walks around with his hands covering below his waste. When Crash gets electrocuted, the player can see that Crash is wearing pink boxers.

Sexual Themes: In the Crash games, there is very light sensual content. The female bandicoot Crash aims to save in the first game looks a bit provocative [Editor’s Note: Tawna was originally designed to resemble Pamela Anderson of Baywatch fame. She was removed from Crash 2 because her appearance was not considered “family friendly,” only to be replaced with Coco]. In one scene, Dr. Cortex states how he wishes he had a woman with great big “bags of ice” for his head—playful.

Positive Themes: As far as positive themes go, Crash is the hero, aiming to stop Dr. Cortex from taking over the world. The game is good fun and will make you laugh at Crash’s goofiness, but otherwise, not much as far as inspirational or thought-provoking. 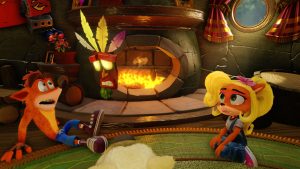 Crash Bandicoot was basically the starting point for Naughty Dog. From there, games such as Jak and Daxter and the Uncharted series got their roots and eventually the developer grew to be a familiar name in gaming. Now here we are in 2017; many Crash games have come out, but none were so well-received as the first three, prompting the remastered versions to be made. Sony has been consistent in releasing remastered games, and this one does not disappoint. Crash Bandicoot: N. Sane Trilogy is more than just a remaster—it’s a warm memory made relevant again. 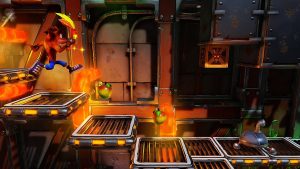 When Crash gets Aku-Aku three times, he can become invincible, allowing him to plow right through enemies. He is not immune to bad jumps though.

The levels of Crash Bandicoot are as difficult and challenging as ever—the first game being the hardest by far. If you are new to the trilogy, expect to die a lot, become frustrated, and proceed to lose more lives due to rushing and being careless. The difficulty factor has almost increased, or perhaps I was just better at this back in the 90’s. When jumping from platform to platform, if the player does not execute a “perfect” jump to the center of the platform, the game will “magically” make you miss and fall to an untimely death, prompting a “but I jumped!” The trick is to continue on and try again—practice makes perfect. It feels good to overcome the hardest levels. Crash even lets out a “phew!” at the end of each level, sharing in your relief.

In terms of the second and third Crash games, the difficulty is set lower, but there is so much more to do than just jumping from platform to platform. In a few levels, Crash rides a baby Polar Bear through an obstacle-ridden course, takes a dive into the deep and swims his way through electric platforms, and eventually even blasts his way through space with a jetpack. Originally, it was only in the third game, Crash Bandicoot: Warped, that the player was able to take control of Coco, Crash’s sister. Now, she’s playable in all levels in all games. There is not much of a difference in control, except her death sequences are different and she is always carrying her laptop. 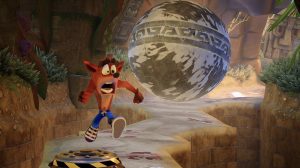 The biggest change is not the addition of Coco as a playable character or the difficulty, but the graphics. The environments are crisp, detailed, and quite pleasing to the eye. At times I found myself stopping a moment to get a look at the background and the platforms and the amount of detail they put into every single level. Crash has also been updated with high-definition fur, a more defined shape, and more funny reactions. When in a cold environment, he’ll shiver and his breath can be seen. When running away from the big boulder, Crash will look back and raise his hands in fright. It’s the details like these that gamers love, especially when they weren’t there before. The cutscenes are majorly updated and they are a welcome change. The voice acting is fantastic and goes very well with each character. Notably, Dr. Cortex has the most lines in all of the games. 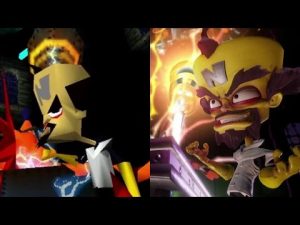 The updated visuals are fantastic and basically brand new 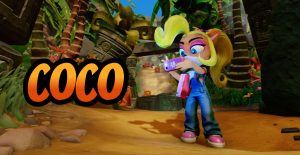 Crash’s sister, Coco, is the smart one. Also, the resident teenager.

In the first game, there are 25 levels and 25 white jewels to collect—only earned if special accomplishments are met. For example, one level will require you to make it to the end, breaking all of the boxes along the way, AND not losing a single life—easier said than done. There are also colored gems that the player can retrieve to open up new pathways in other levels. In the second and third games, Crash is forced to collect 25 purple gems from 25 different levels, but now there are 45 other gems total to collect before seeing the alternative ending sequence. It’s challenging, especially when some levels force you to backtrack in order to retrieve all boxes and gems. Levels also contain time attacks, pushing you beat the clock in order to retrieve a mysterious artifact in every level.

Yes, this is going to happen to you

One of things Crash Bandicoot: N. Sane Trilogy could’ve improved on is the balance of difficulty in certain levels. At times it felt like some levels were “freebies,” by being very easy to go through without dying or missing a box. Other levels are just plain difficult and will take 20+ tries to beat. I was able to beat the story in the third Crash game in less than 4 hours whereas it took me a whole day to try to conquer a single level in the first Crash game. If one level was not able to be beat, then I could not move on. This was changed in the second and third games, giving access to five levels at a time. This was pretty smart, in case the player wanted to try other levels instead of be stuck on a single level. In the remasters, perhaps the difficulty could have been made to be equal throughout all the games. 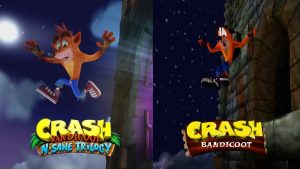 In the end, Crash Bandicoot: N. Sane Trilogy is great. The visuals, the inclusion of Coco as a playable character, the voice acting, the audio enhancements, and the improved cutscenes all come together to make a successful and good quality re-release of a classic. Few negative things can be said aside from problems with difficulty and play style, but these are minor. Whether new to Crash or returning, players will love Crash Bandicoot and the challenge it presents. It’s a simple and classic platformer for seasoned and young gamers alike.