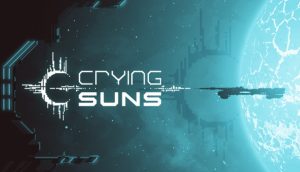 Based in Montpellier, France, developer Alt Shift began in 2012 with developing small-scale web design and mobile games. By June 2018, they had decided to try their hand at their most ambitious project of all, launching a Kickstarter campaign for a space-based sci-fi roguelite that would exceed its modest goal of ~$30,000 by $50,000. In other words, demand was high for the game that would become Crying Suns. I became aware of its existence as it approached its launch date while drawing comparisons to Foundation and FTL: Faster Than Light. As a huge fan of the latter, I looked forward to determining if the comparison is meritorious. 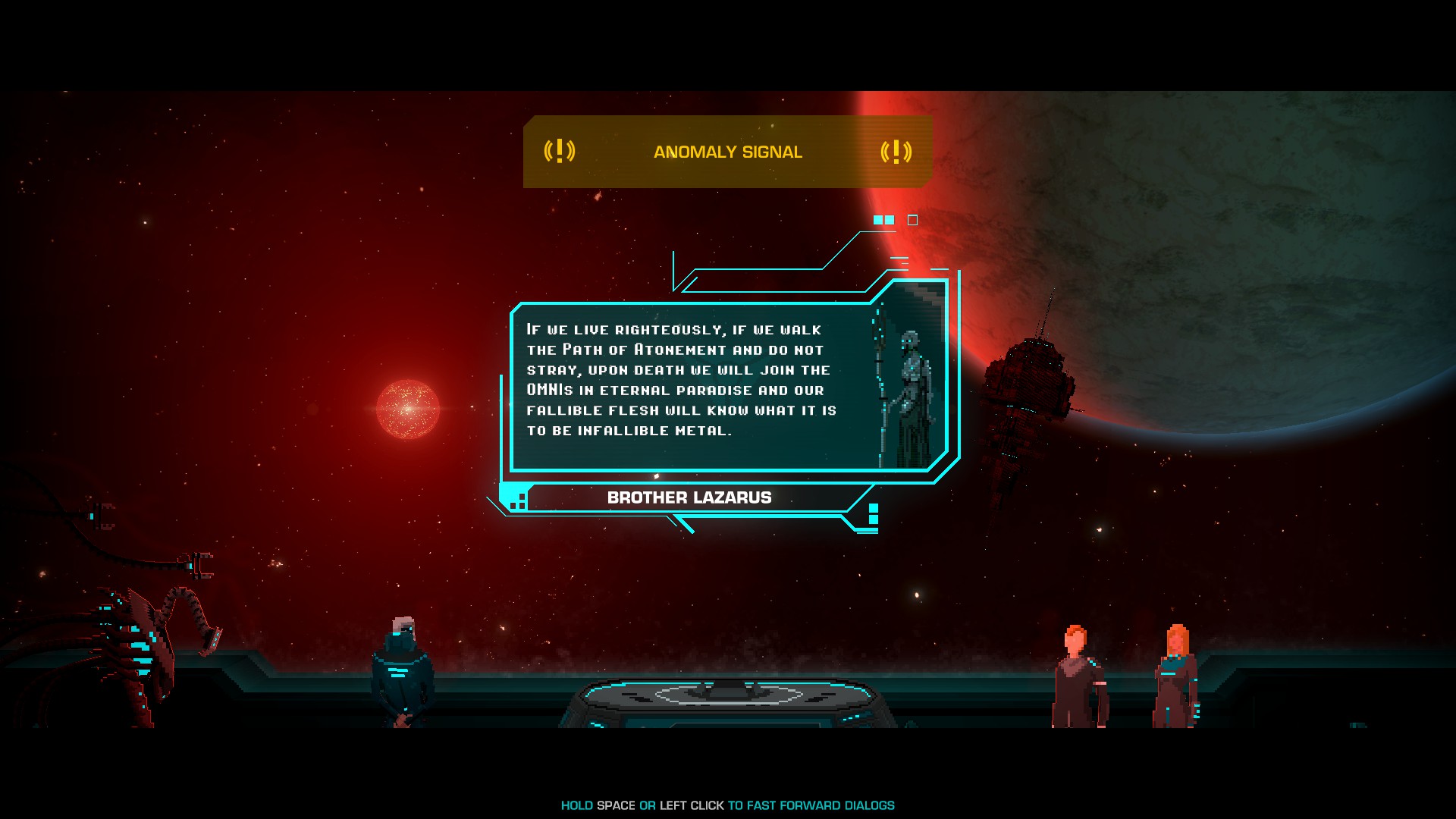 Remember when humanity thought heaven was above the clouds?

Crying Suns conveys all of our standard content categories—violence, spirituality, sexuality, language, drug and alcohol use—primarily through narrative exposition like a genuine sci-fi novel. As the galactic empire has fallen into decay, billions die from starvation, war, suicide, or chemical dependency. There are some exceedingly rare images of cryogenically frozen bodies, skeletal remains, and disrobed bodies (though due to the pixel art, I cannot discern any naughty bits). 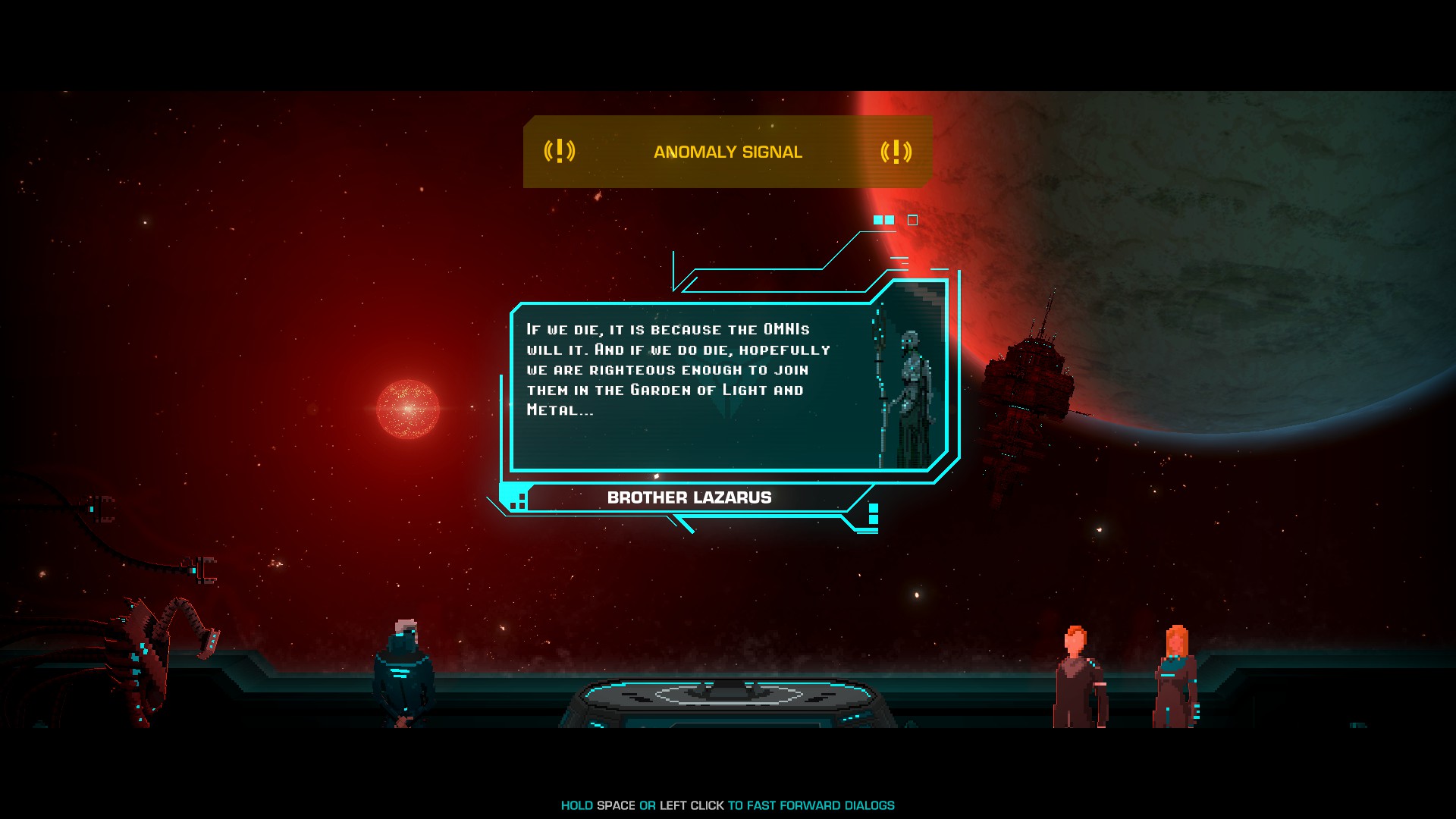 Of special note is a specific faction called the Church of Singularity. Originally founded for the purpose of worshiping machines as gods, when the machines died, the Church shifted from worshiping “living” gods to worshiping “dead” ones. In Matthew 19:21, Jesus says to a rich man, “If you would be perfect, go, sell what you possess and give to the poor, and you will have treasure in heaven; and come, follow me.” Practitioners of this religion likewise believe that they should relinquish all possessions to achieve salvation, but this is how the Church perpetuates its wealth to the detriment of the faithful. It is a fictional religion, though it nevertheless illustrates the power of ideology.

Crying Suns opens with a scene reminiscent of the Matrix when Morpheus informs Neo of the machines using humans as batteries. The camera descends in a laboratory full of bodies in stasis chambers, and then further downward into a basement-like room housing a single chamber. A multi-tentacled robot unseals it, and out plops a man who props himself on all fours on the floor. The robot introduces himself as Kaliban, an Omni Mechanical Neo-N Intelligence (OMNI). It informs the player-character that he is as a clone of Admiral Ellys Idaho, produced on a secret base named Gehenna, located in the farthest corner of the galaxy.

Kaliban’s purpose is to care for the clones of Idaho and his crew, awakening them should a catastrophic event take place in the Galactic Empire. Indeed, the OMNIs which humanity depended upon for their survival have shut down. Idaho’s mission, then, is to find out what shut down the OMNIs, and reactivate them.

In terms of design, Crying Suns borrows generously from many sources in the world of sci-fi. The core of its gameplay centers around Alt Shift’s fandom of Subset Games’  FTL: Faster Than Light. Rather than dedicating full paragraphs explaining the how, I will instead utilize screenshots. 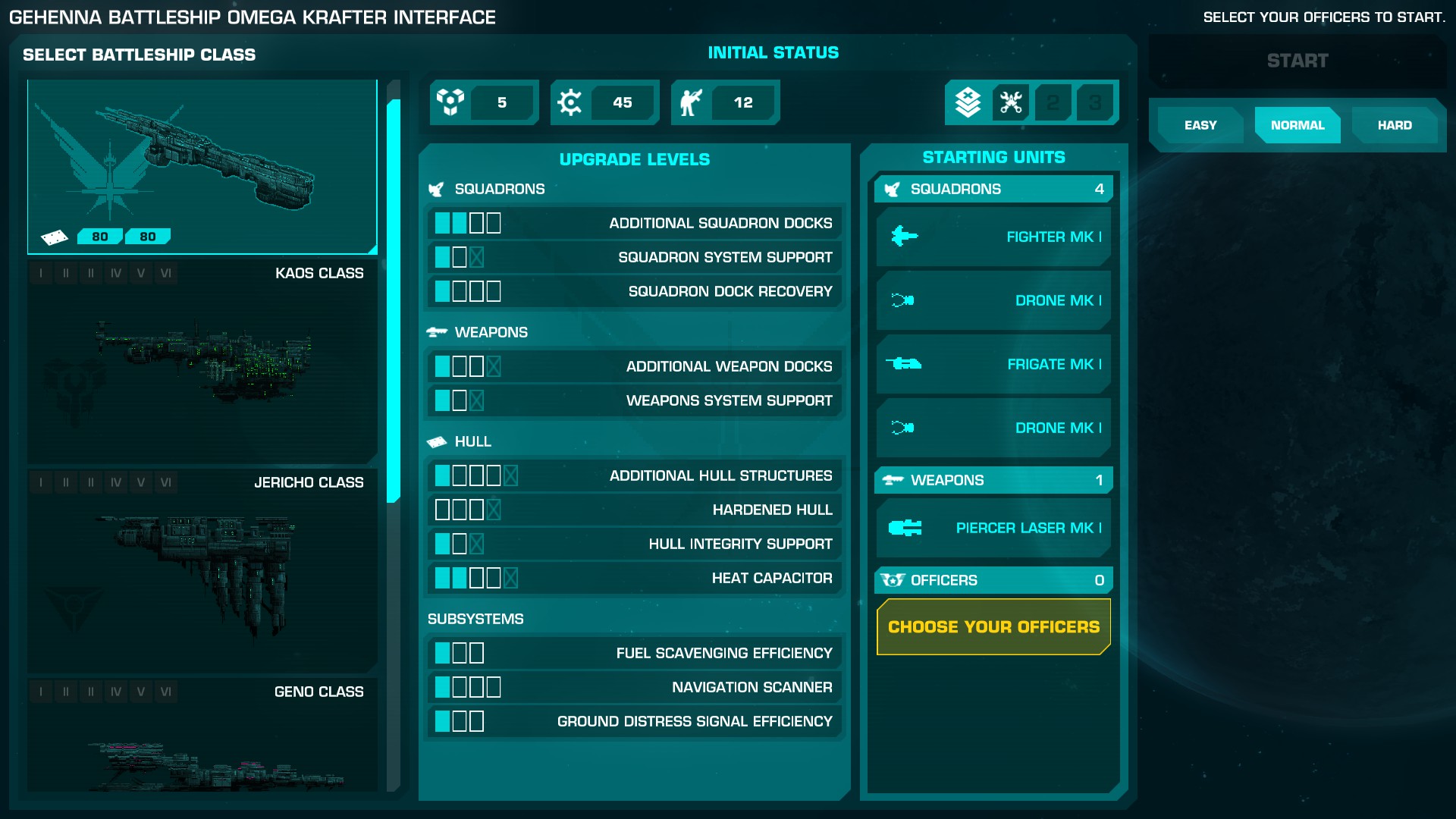 I am certain there is some technical term for the greenish tint throughout Crying Suns’ art direction. Whatever it is, it works for outer space. It reminds me of a similar filter for MGS on PSX.

As with FTL, in Crying Suns players will naturally need to select their ship; only the NS-Odysseus is unlocked in the beginning. Fortunately, instead of triggering random events and fulfilling the requirements of rare events (missions), one only needs to progress through the game naturally to unlock all six ships. Of course, each ship is balanced with different default attributes to encourage variable playstyles and multiple playthroughs. 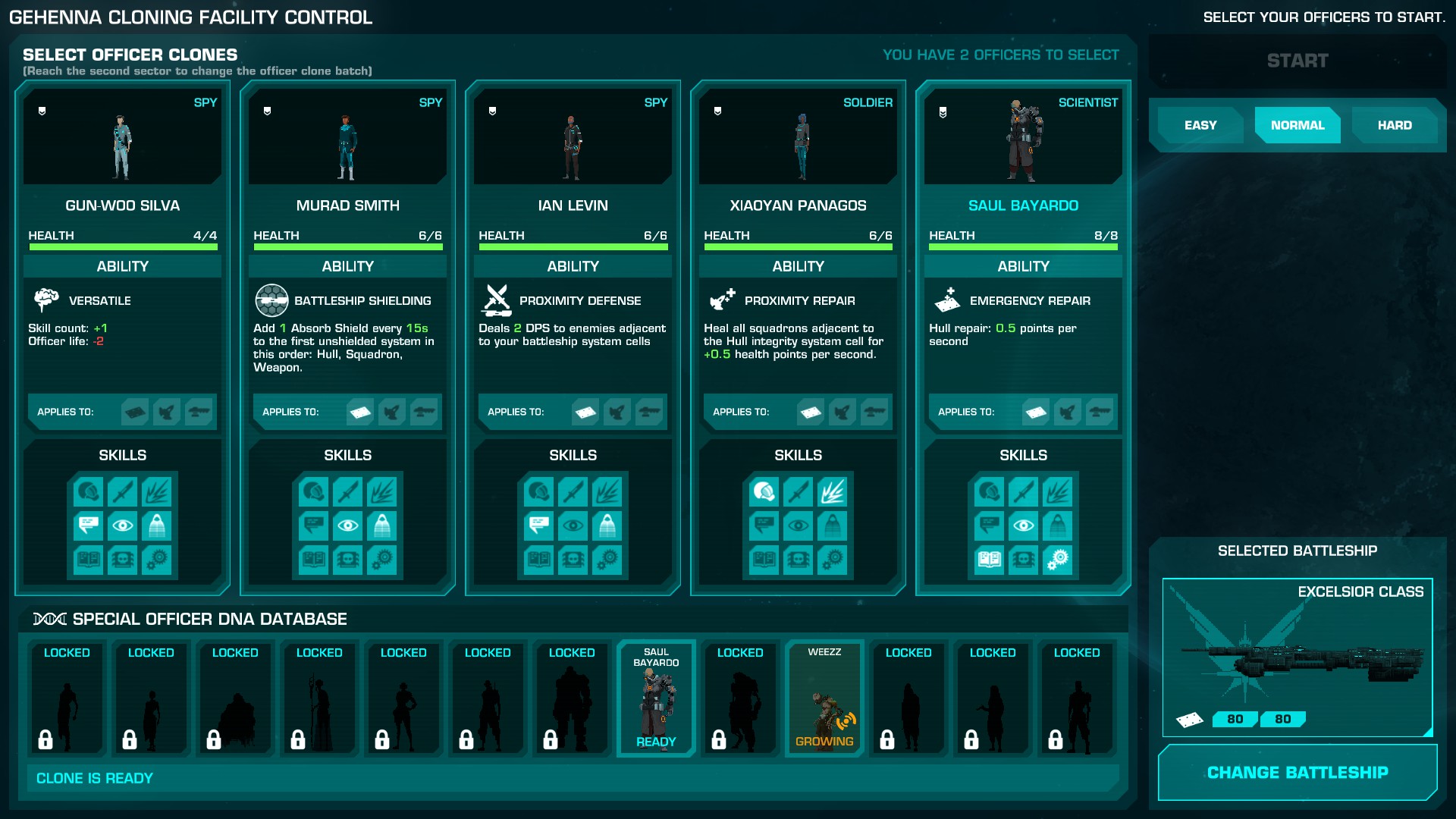 Players must choose two officers on the next screen. Rather than needing to remember the traits of different races, one can see plainly the characteristics of each randomized option. Crying Suns is not limited to the specializations illustrated above. My favorite, Tactical Deployment, is missing here; it expands the zone in which squadrons are deployed during battle, but more on that in the combat section. 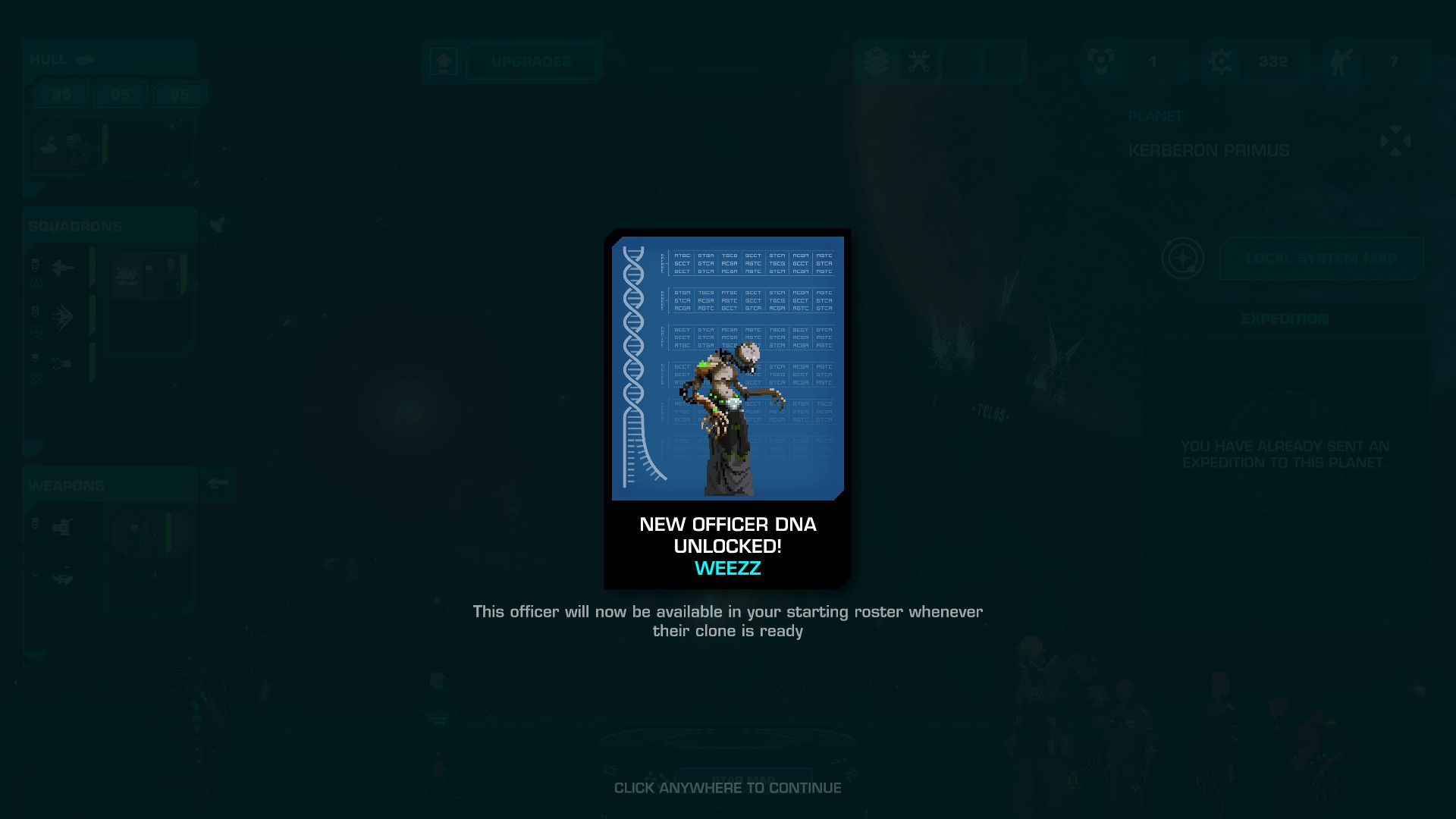 Out of the officers actually shown, I would take the two who have three instead of two skills, as these are critical for executing marine missions after planetfall. The list of unique officers appears on the bottom of the screen once they are unlocked. Finding these officers is difficult, because I only managed to find two in twenty hours of gameplay. Like in FTL, if officers (and weapons and units) are not granted through random events or rewards for battles, they can be purchased from shops. 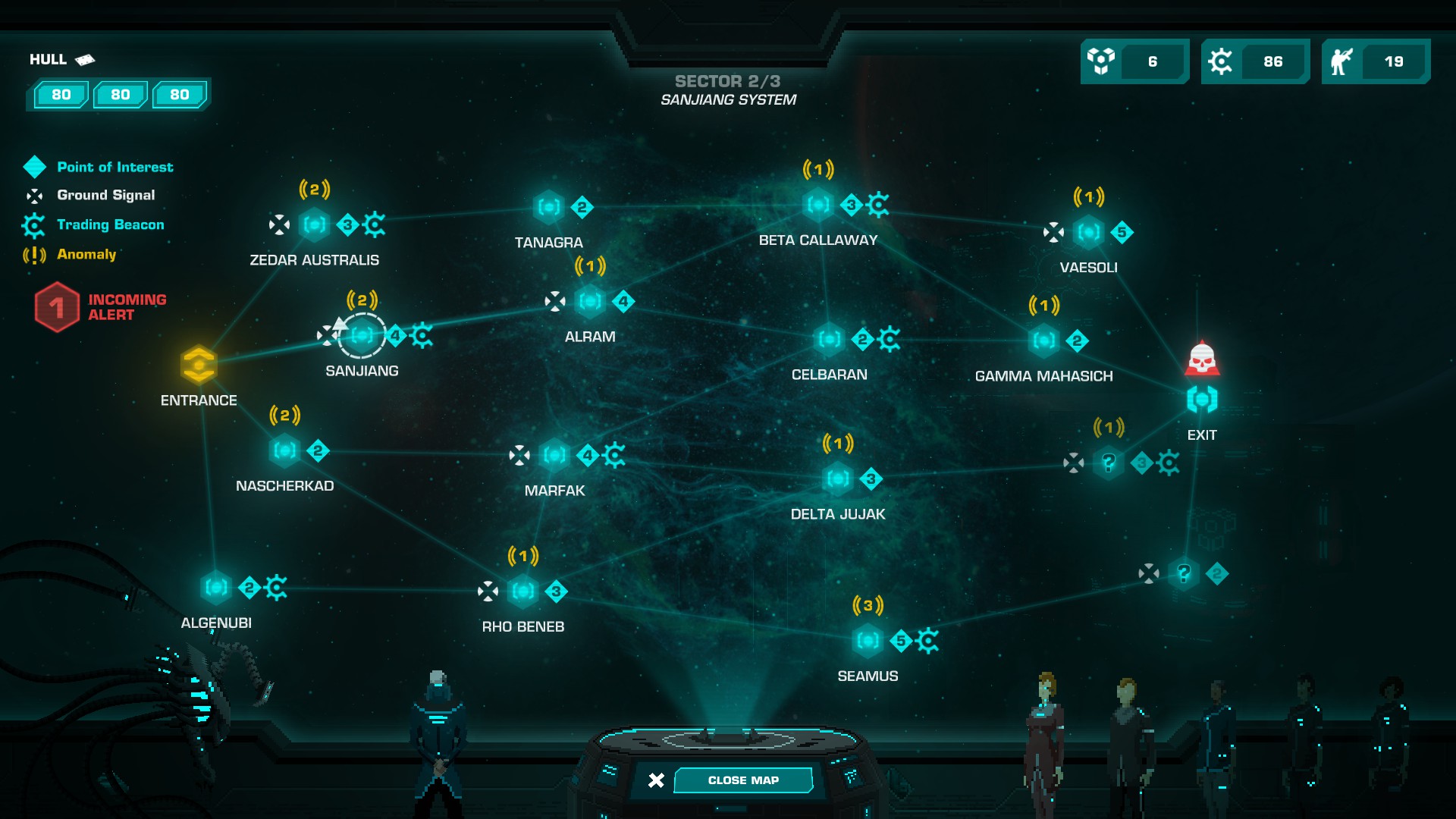 It will require all but two seconds for FTL veterans to recognize the star chart navigational method: one jump requires one unit of fuel, and running out could prove deadly with an enemy fleet in pursuit. Yet unlike FTL, every star hosts an RNG-based fuel replenishment station and a cluster of points of interest (planets) to visit, ranging from two to five. Each chapter in Crying Suns comprises of three star maps (sectors) in total before facing a boss. The most stops I have been able to manage before the bad guys catch up with me is twenty-two in one sector; triple this across five chapters, and that adds up to a ton of stops! Effectively, a single campaign in Crying Suns is twice as long as FTL. 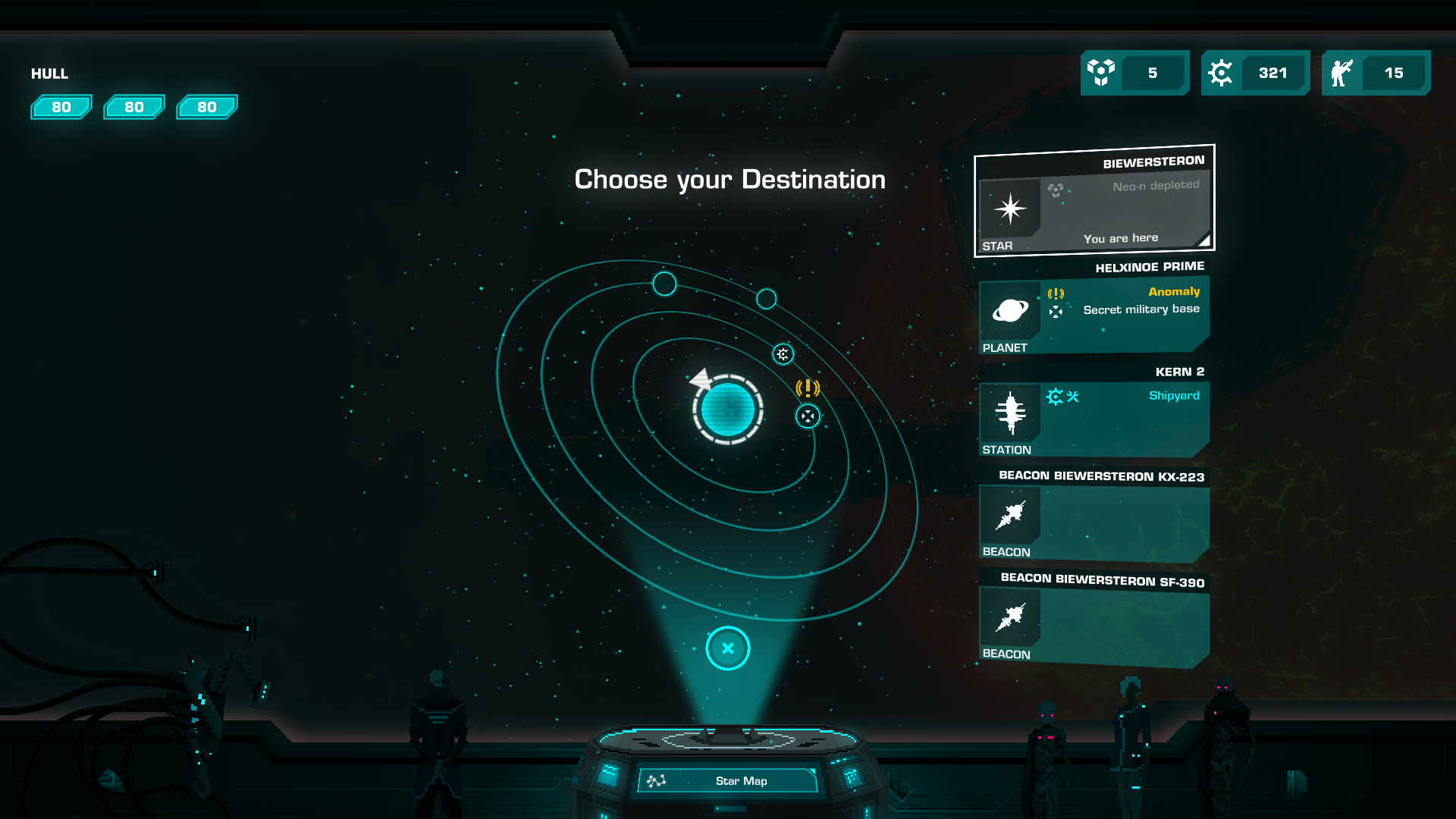 The more stops one can make, the more opportunities there will be for events, which means more opportunities for scrap, which means more cash for ship purchases. The greatest potential for scrap lies with ground signals, where players will send an officer to lead a squad of ten marines down to a planet to auto-explore randomly-generated landmarks. Here is where officer skill diversity matters most, because skill redundancies increase the chance of mission failure. The consequence for failure is the loss of marines, which require scrap to hire. Officers can also be injured, though I am unsure how that impacts their performance. 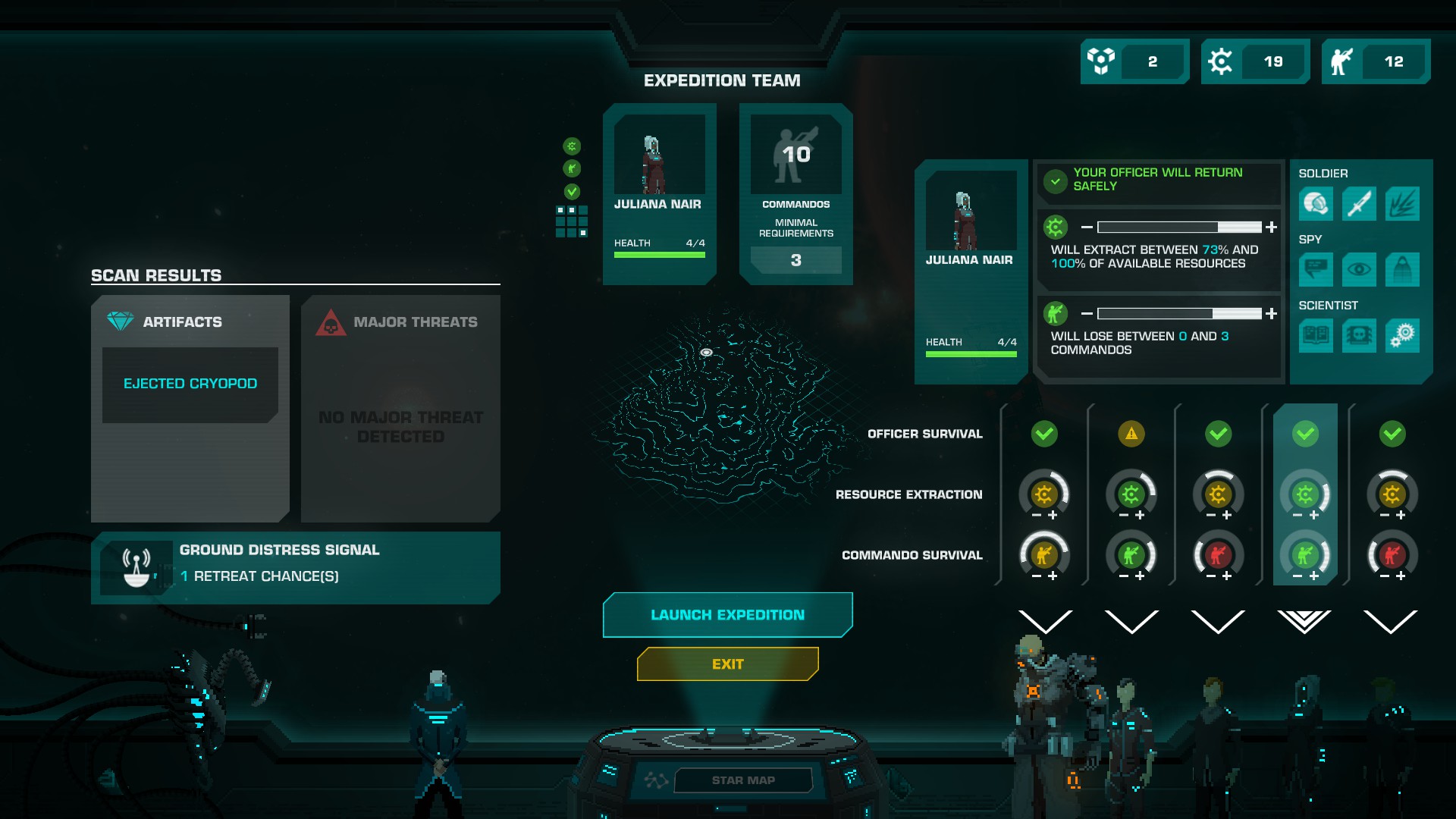 As I mentioned earlier, the best officers are (the unique ones) with three skills. Here, my officer rocks maximum benefits. 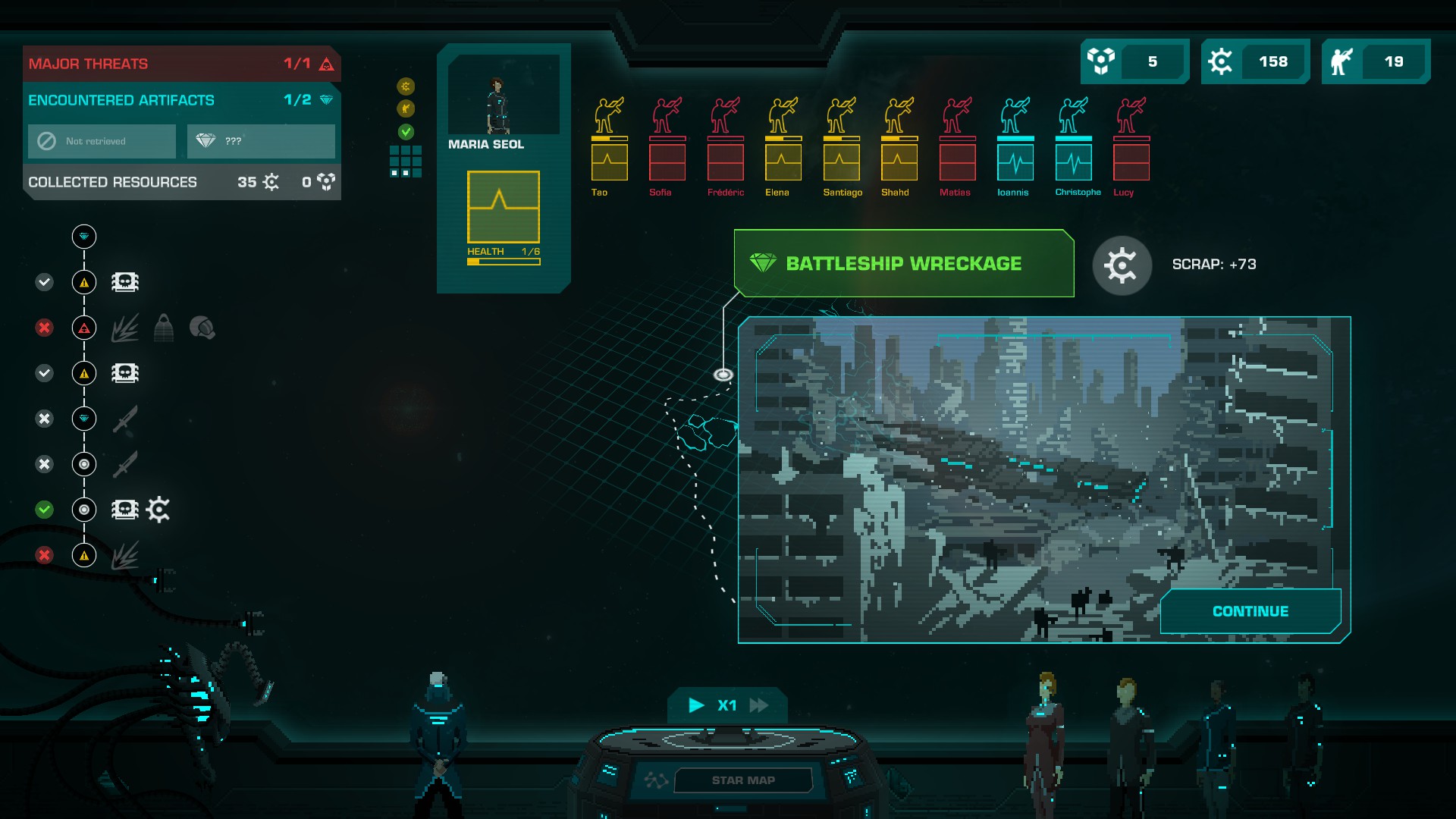 Alternatively, a poorly-selected officer can be disastrous. I end up failing this excursion, losing 8 marines (80 scrap worth), and ruining my chances for future bonuses. Yes, think of these as “bonus chances.”

Naturally, players will want the NS-Odysseus to be fully-loaded before reaching sector bosses. I believe the best route for this is outfitting it with a variety of combat units. Crying Suns implements RTS-style rock-paper-scissors counters for units: drones counter frigates, frigates counter fighters, fighters counter drones, and everything is strong against cruisers when at point-blank range, though it becomes a force to be reckoned with at a distance as it wields the highest DPS in the game.

Stock animated .gif from the Steam store page, because the flow of combat is difficult to describe.

Despite the hexed battlefield, combat takes place in real-time (with a pause button). The objective is to occupy the northeast quadrant of the map and attack the enemy battleship’s subsystems. When the weapon or squadron subsystems sustain enough heat from damage, it will be disabled, extending recovery times. This is critical, because when a weapon is discharged or a ship unit is destroyed, they enter a cooldown period that extends from overheating, providing additional windows for assault. After enough damage, a ship loses a unit of hull; when hull units become zero, the ship is destroyed. This goes both ways, for the player and the AI. 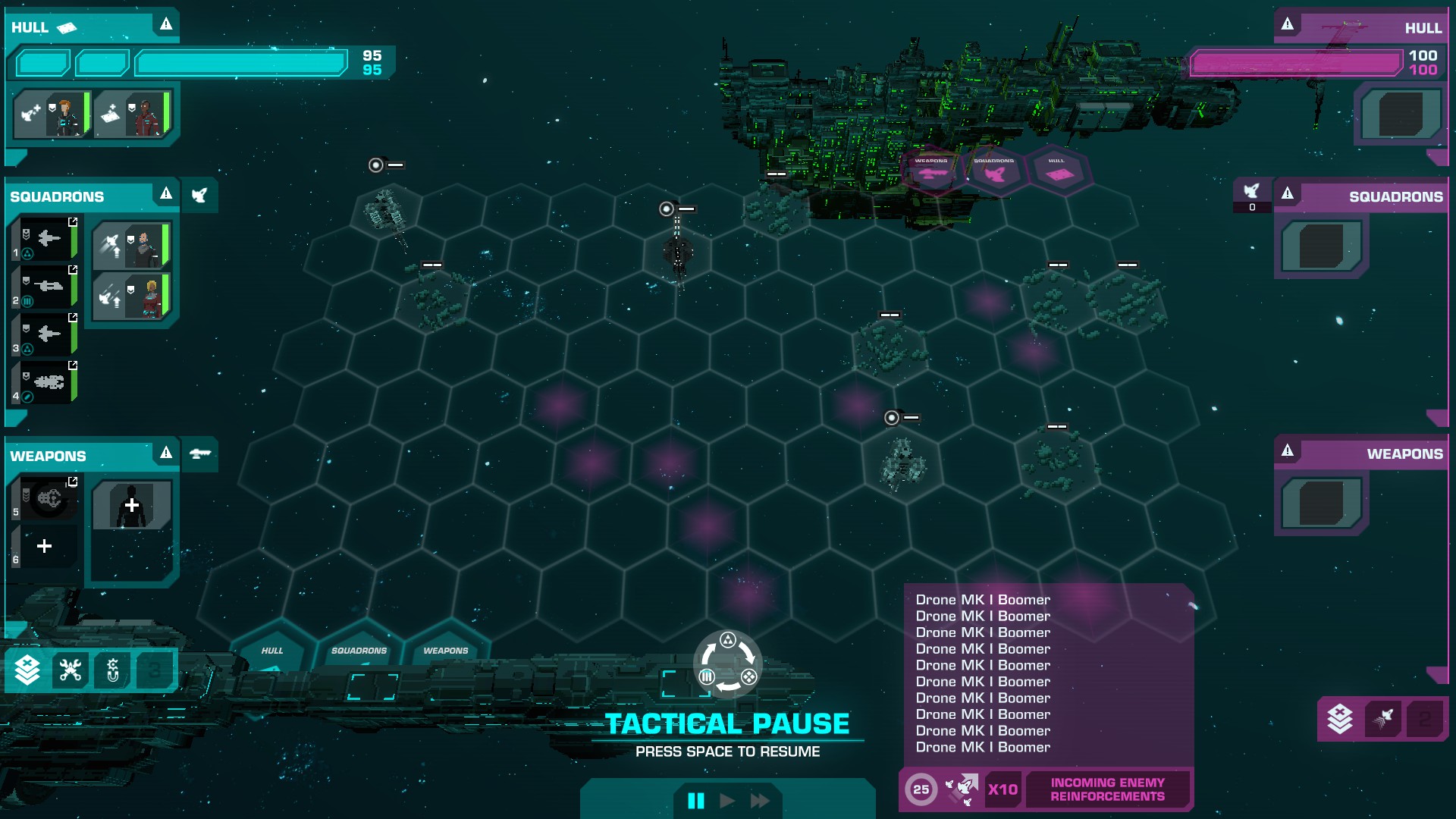 The difference though, is that on occasion the AI gets periodic reinforcements for a difficulty bump. After all, a human should be able to handle the added challenge. In order to keep pace, players will have to micromanage, alternating between units by docking them in and out of the battleship as one does with strike craft in Homeworld to give them a chance to heal. Besides the cooldown when ships are destroyed, they only heal up to half-health. Maintaining a weak fleet is risky business in a roguelite, but I find Crying Suns generous in its difficulty, especially for those familiar with the unforgiving nature of FTL. My two defeats during my review playthrough came by way of failing to understand the game’s mechanics, as well as ignoring the fleet composition hints provided during early sector encounters. 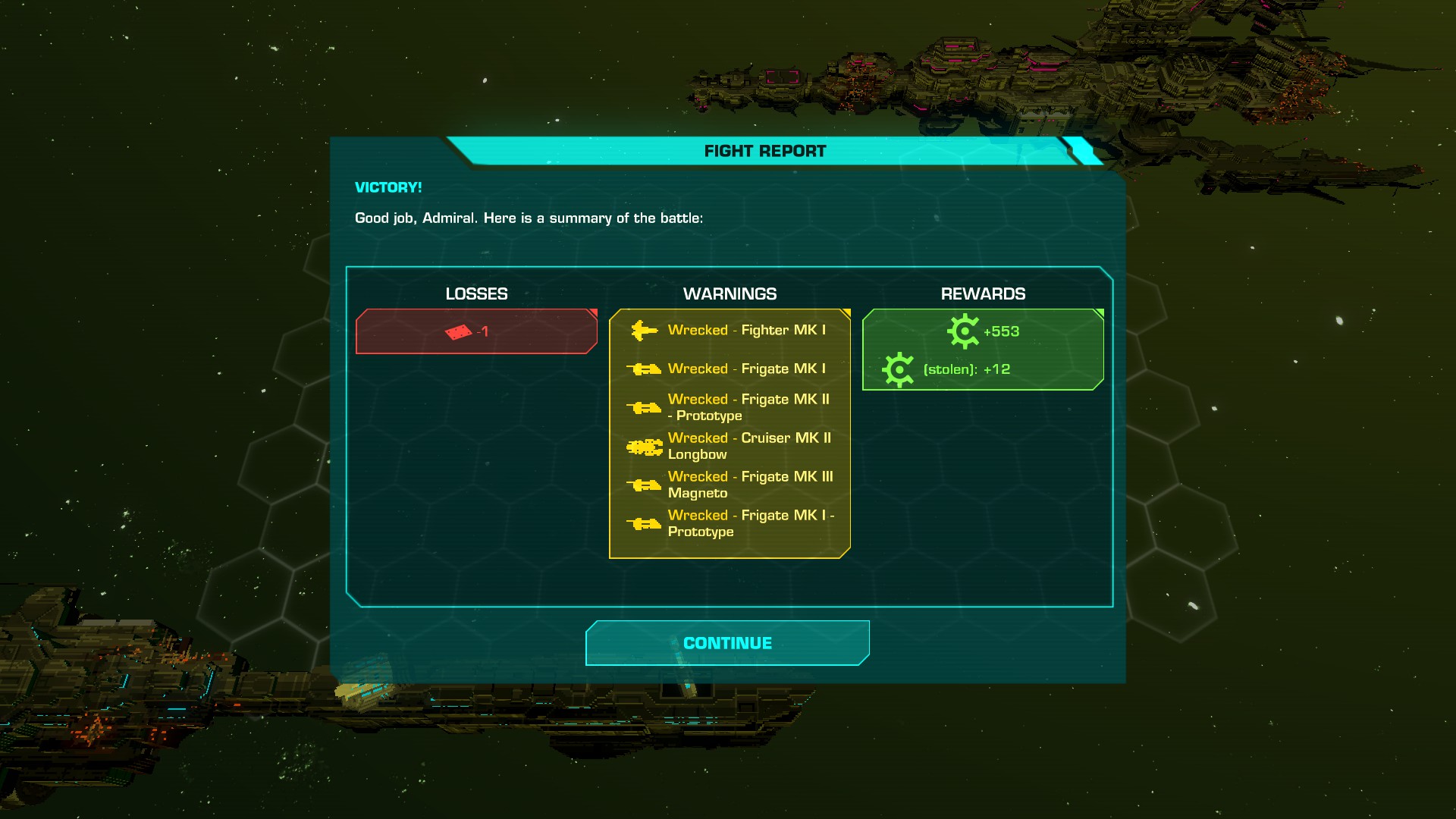 Some fights can be intense!

The highlight of Crying Suns, and what really distinguishes it from FTL, is its story. While there are instances in the later sectors when some of the events become repetitive (a recent patch promises more variance for events; I have seen some new ones, but also some repeats), and enemies critical to the plot muster a few perfunctory lines, I kept pressing on because I wanted to know the fate of the Galactic Empire and the reason why the OMNIs shut down. As I did so, I learned about the real Admiral Idaho’s past, and the lives of the facsimile and the original began to converge. 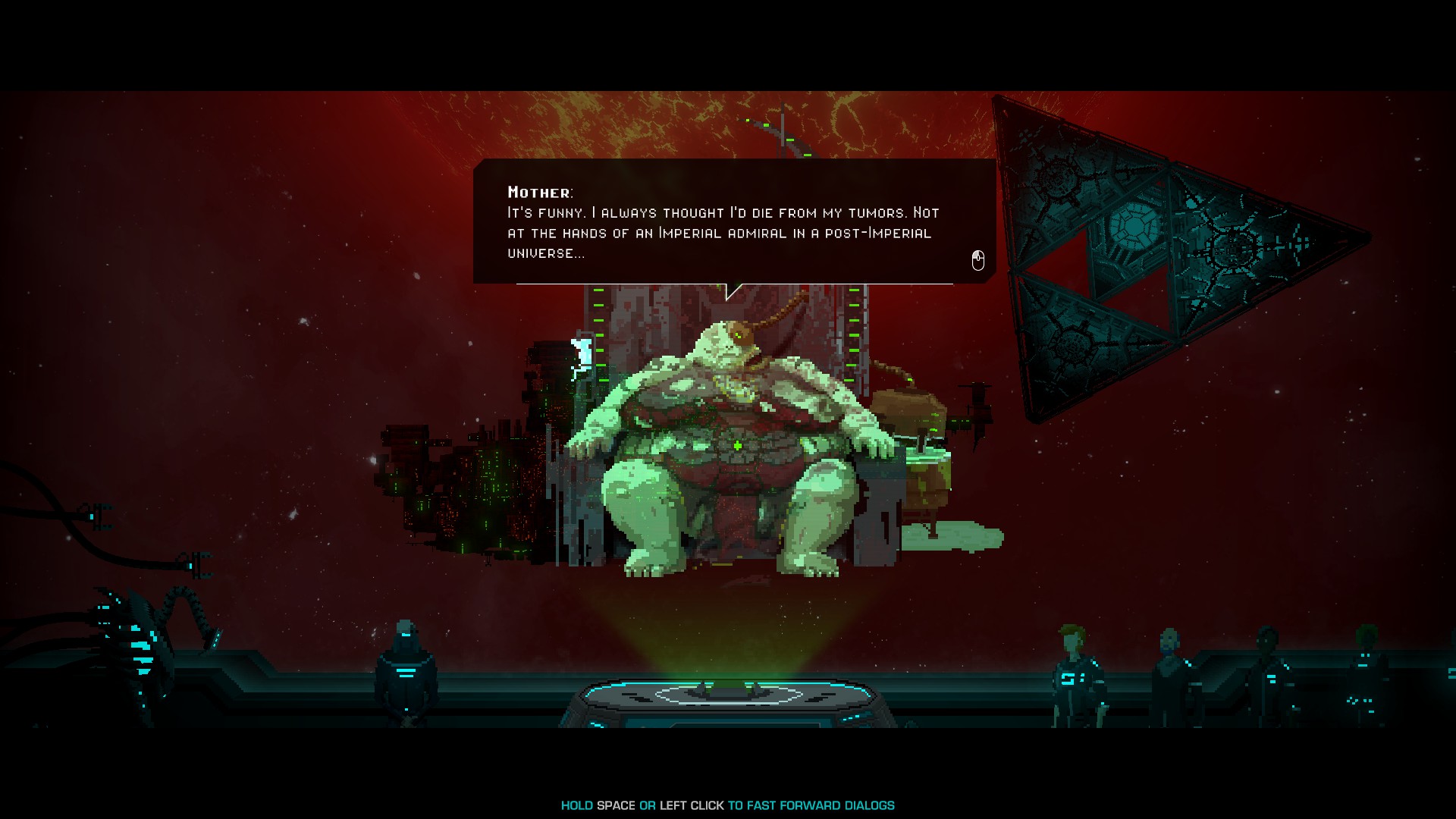 Mother is only the first of many characters oozing with lore.

As I navigated across the known universe, I enjoyed sci-fi bliss, as Crying Suns pulls from so many inspirations that even Alt Shift seemingly subconsciously channeled mass effect relays within this game’s version of interstellar travel with the fold system. Astonishingly, Crying Suns fuses these various elements together to make for a harmonious experience. If Alt Shift was aiming for FTL 2.0, they have hit the mark.

Many games claim to be inspired by the likes of FTL, but few actually manage to do its legacy justice like Alt Shift's Crying Suns.