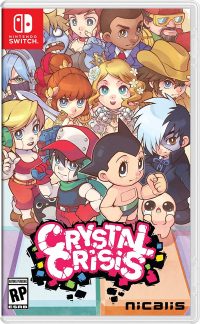 Nicalis is at it again, with their epic crossover universe and I have yet to figure out what to call it—NCEU? NCU? Well, I can work on that later, because I’m here to share my thoughts on Crystal Crysis. I had the opportunity to review Blade Strangers, their first crossover outing in which their characters battled one another in a 2-D fighting game. Many of these characters meet again, but in a much different form of combat. Crystal Crisis is a competitive puzzle game inspired by the likes of Puzzle Fighter. So, if fighting games aren’t for you, then matching colors and smashing gems might be.

Spiritual Themes: The story takes place around a powerful magical crystal that the characters are after. Some of the characters have a supernatural origin being that they are a zombie, a vampire, and a demon.

Violence: Crystal Crysis may be a puzzle game, but two opponents are still fighting one another in the center of the screen. As players work to clear blocks of colors, their character performs attacks against the other. Clearing blocks also pile them onto the opponent’s playing field, and they are defeated when those blocks reach to a certain height. When fighting, the characters will attack each other with weapons such as swords, guns, and more.

Sexual Content: Some of the characters wear outfits that reveal cleavage. One of them is Solange, from Code of Princess EX, who is infamous for her attire, or lack thereof.

Language: “Screw you” is the worst you’ll find here. 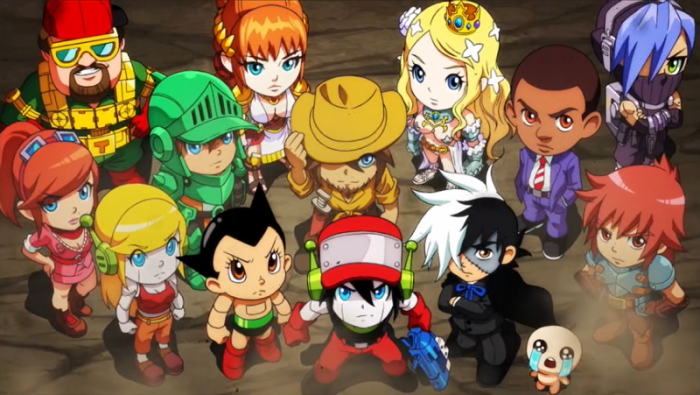 In Crystal Crisis, universes collide once more while being drawn to a powerful crystal. The forces of evil want it for destruction, while a team of heroes aims to protect it. Nicalis continues to bring characters from their intellectual properties, but also more guest characters.  We have Astro Boy and Black Jack joining the roster from the Tezuka Productions animation company this time around.

Instead of the 2D hand-drawn art style of Blade Strangers, Crystal Crisis goes 3-D with chibi-like characters.  I prefer the previous aesthetic, but the latter pays homage to the Puzzle Fighter series that the gameplay itself was inspired by. In browsing the Extras art gallery, I discovered that the character design is labeled “cutie” for this specific presentation. This art style is a fun direction that should be visually pleasing enough to get people of all ages into the action. 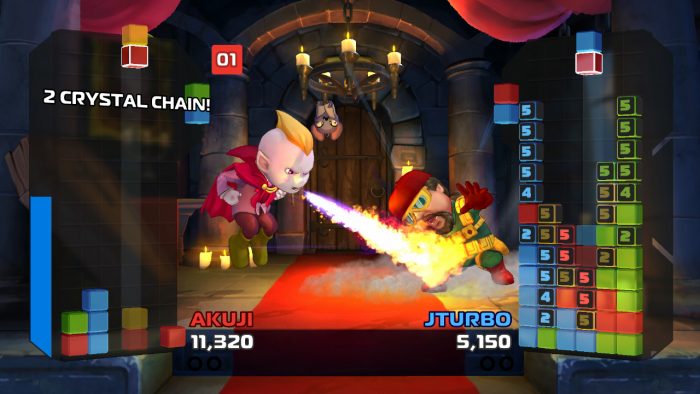 The competitive puzzle gameplay also seems reasonably accessible for all skill levels. The basic idea is to create blocks of colors as pieces fall and shatter them with a crystal of the same color. Clearing the clusters and executing combos creates timed garbage on the opponent’s playing field. That garbage changes into its respective colors after five turns so players can remove it. Each character also has individual offensive and defensive abilities that can be activated once enough meter is built up. The fun part about using these abilities can be whether you use them to save yourself from defeat or seal your victory against an opponent.

I found some of these special moves to be very helpful in my victories. One of my favorite offensive abilities has Astro Boy shifting the opponent’s blocks to the right. It can throw off any plans they might have been putting together on the way down. One of my favorite defensive abilities is where Quote blasts away a large chunk of blocks on his playing field. Though simple, it became super useful in giving me some more space as I was on the verge of defeat.

Crystal Crysis uses the playing field more unique than I have seen other puzzle games do as well. Most in this genre limit movement within the left and right walls, but that isn’t the case here. You can divide your two colored blocks on either side of the field or take a shortcut to the opposite side. It makes some snap decisions much more manageable, instead of wasting time moving blocks from one side to the other. 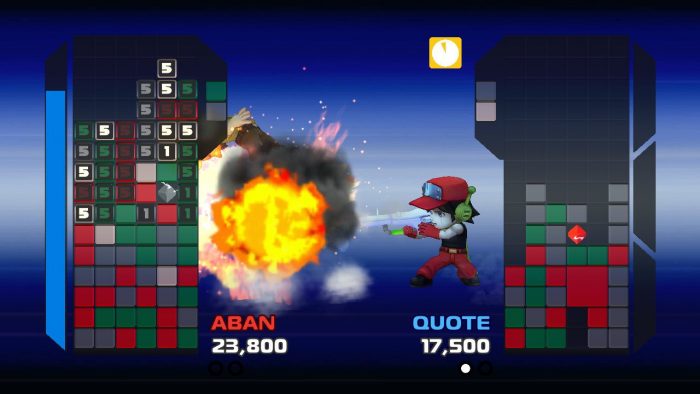 Crystal Crisis‘ biggest failure is in what they call a colorblind mode. This option that is in the features list lets you choose a set of block colors based on the different characters. However, in many cases, some of the colors in a selection are quite similar to themselves. It can be especially hindering when I’m looking at the guidelines of where my blocks are going to land. Luckily, I did find a color set that ended up working for me, but it made the onboarding process rather cumbersome. The game also starts with an angled playing field by default. It is a unique effect, but you can turn it off and go back to the standard flat look that offers a more unobstructed view of the action.

If this game already sounds like it is up your alley, then let’s discuss the offering of gameplay modes. Allow me to begin with some bad news—the story mode is lackluster. It is told through ten matches, but feels more like a vignette of a potentially great story. The characters talk before and after fights, but there isn’t much between that other than Peter Cullen (Optimus Prime) briefly setting the stage. Before some of the battles, you can choose which character to control. Sadly, it doesn’t affect the story in any way. This story mode left me wanting more—perhaps an anime adaption? Either way, it’s worth playing through to hear Peter Cullen speak who also narrates the game’s intro. 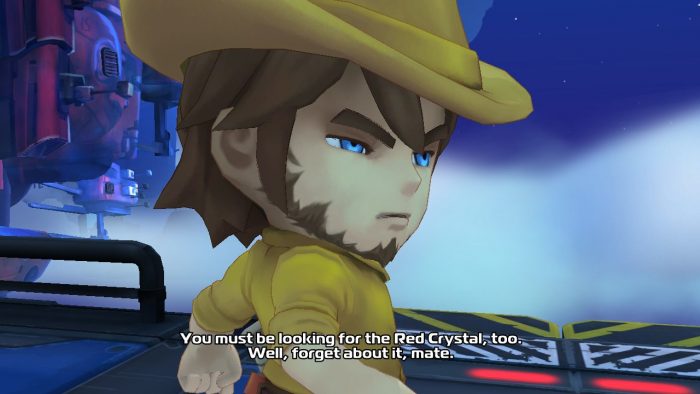 The rest of the game modes are fairly standard, and where you’ll get the most action. You can test your skills in an arcade mode with varying difficulties, survival mode, tag battle, and a few more that are unlockable. When those skills are ready to be tested, you can face off against other players online. The online features also include what comes standard, such as ranked, unranked, and private matches. Luckily, there are plenty of options beyond the short story mode.

Crystal Crisis includes a few fun extras that we don’t often get to see these days. The first being an art gallery; which is something I enjoy looking through when a game includes this kind of content. The other is a music player, although there weren’t any tracks that stood out to me. I like that the developers went the extra mile to include these even if more effort could’ve been in other areas.

Crystal Crysis is an entertaining spiritual successor, but this isn’t something I can recommend to everyone unless you are familiar with the genre. If so, then I would say it might be fun to play with your kids or young relatives. I ended up getting a good grasp of the mechanics, but there wasn’t enough for me to keep playing very long. However, Nicalis continues to impress with significant production quality for their second crossover.

Crystal Crisis is a fun spiritual successor to Puzzle Fighter that is simple enough for all ages to pick up, but it falls a little short compared to its crossover predecessor.