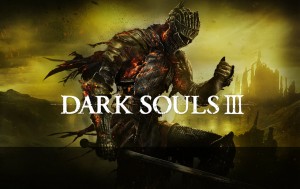 When Dark Souls III was officially announced, I was more than a little giddy. I couldn’t wait to square off against giant bosses and impossible odds, explore a dark world full of fantastic secrets, and claim my place as the hero of the land. Does FromSoftware’s latest rage-inducing title earn its place in the Souls pantheon? Gladly, after 45 hours, I can handily and joyfully validate fans’ anticipation. 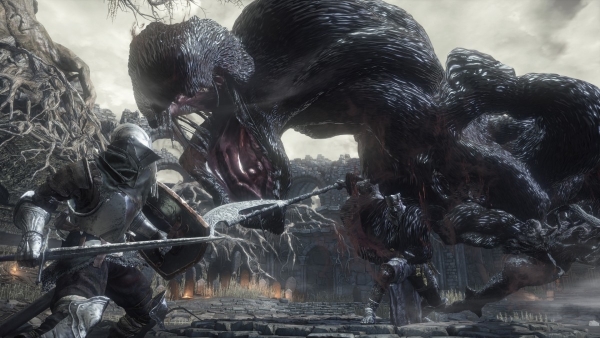 Plenty of horrors await those willing to venture through Lothric.

Dark Souls III is full of spiritual content some believers may take issue with. Your character has risen from the dead. There are various forms of spirits and magics throughout the world of Lothric. Your only form of currency and progression are actually souls which are obtained from slaughtering enemies. This is truly a dark fantasy game complete with all the trimmings and the squeamish need not apply.

You will die. Over and over again. You will be shot, stabbed, slashed, bitten, burned, poisoned, crushed, and far more time and again. The game itself has blood and some of the animations are gruesome, but ultimately much of the violence is just a vehicle to gauge progress  and mistakes instead of glorifying it like Mortal Kombat. Violence is certainly there, though the gore is not very intense. 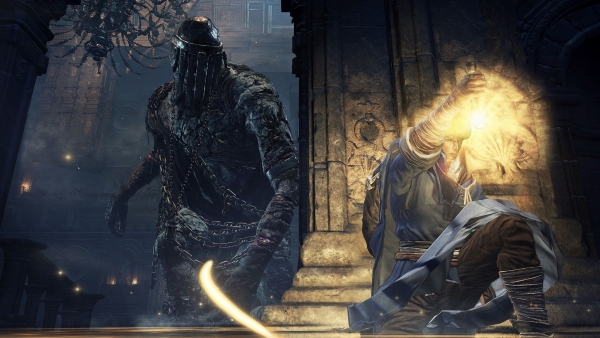 Much of the spoken dialog in the game is dark and foreboding. A joke or two is a rare commodity and poor taste doesn’t exist in Lothric. Players are much more likely to use colorful language than anything spoken in dialog.

Surprisingly, nothing in Dark Souls III is sexualized. This is a dark, lonesome, dangerous world and its inhabitants behave accordingly instead of prancing around in negligee.

Folks wanting a quick pat on the back need to keep on walking. Dark Souls III is all about rewarding patience and perseverance. While players will certainly hit walls they’ll need to walk away from, nothing is more rewarding than finally toppling a massive foe or making it to the next bonfire around the bend. 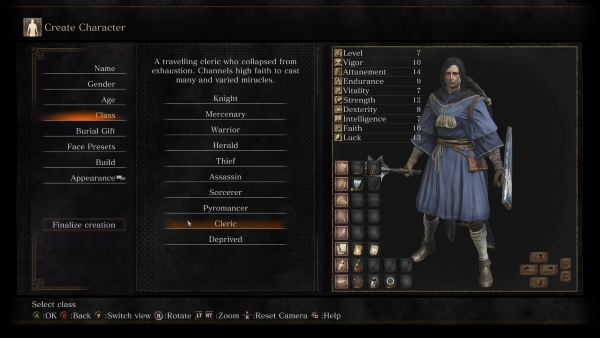 You control your character’s destiny.

First, let’s discuss what everyone knows. Dark Souls games are infamously difficult. From that point, there are two camps: those who drink deeply from its satiating waters and those who dip their toes in, feel the icy chill, and canter off to gentler fare. While Dark Souls III makes steps to continue widening its audience, its legendary learning curve will still claim a fair share of zeitgeist-seeking adventurers who’ll realize they don’t have the patience demanded of them. Make no mistake—newcomers willing to take their lumps and learn the game’s mechanics will have a fantastic time, but folks seeking a microwave-culture, instant-gratification experience will quickly find themselves in over their heads. 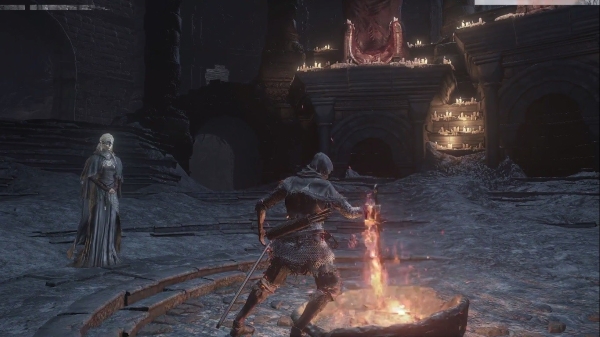 “Light the fiiiiiiire in my shriiiine”

The First Flame is dying out in the kingdom of Lothric. The Lords of Cinder have abandoned their responsibilities to link the First Flame and you, the Ashen One, has risen from the dead to hunt them down and force their hands. Should you fail, the Time of Darkness will smother out all light and human life will cease to exist.

It’s a potent setup that helps establish the tone for your adventure through Lothric and its premise helps establish some exhilarating events that will stay in the minds of players for years to come. As with other games in the franchise, the real appeal of Dark Souls III‘s storytelling is exhibited more through its environment than any expressed narrative or cutscene. A small setpiece can open the door to hours of adventuring and wondrous heroes and villains can hide around any hidden path. The way they all play with one another and relate to world events is just as significant. You’ll almost certainly miss something your first time around to drop your jaw on a subsequent playthrough. 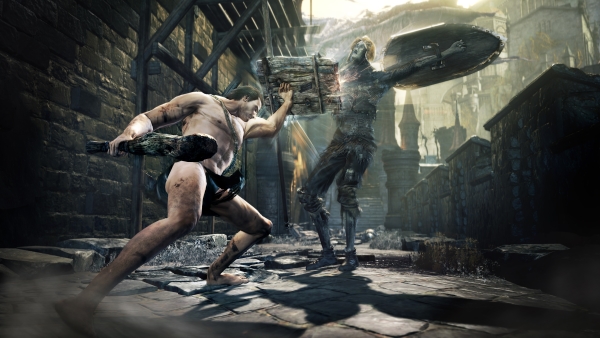 Combat can be both rewarding and punishing

As with any Souls game, the combat is fluid and fair, punishing poorly timed swings and rewarding diligence with perfect openings for massive damage. Players have a huge array of combat options available to them from archery and spellcasting to an expansive array of martial weaponry. Everything feels unique, granting players true agency in their experience.

The progression system in Dark Souls III is great, though it feels mildly like a step in the wrong direction. Beyond the standard player stat enhancements, you can imbue and improve weapons and shields of all makes. You can still gird yourself out with several weapons of various elements to prepare for any situation at hand. It is disappointing to see the armor reinforcement of previous games no longer around, though. While I’m sure FromSoftware intended to trim the fat to focus on gameplay, it feels like one of the best progression mechanics had its wings clipped. 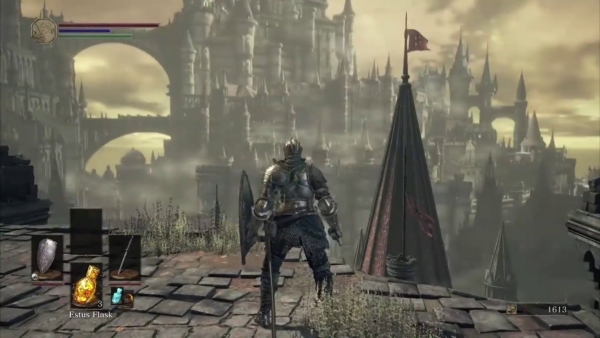 The world around you is both beautiful and foreboding

For fans of the original Dark Souls that claimed DSII did away with the cohesive world of the original, you can rejoice. The connected environments return after a fashion. If you can see it in the distance, you can eventually get to it. The game is full of beautiful vistas, stately castles, haunted burgs, and much more. Everything tells a story with dangerous, exciting setpieces and the promises of gold and glory. It’s easy to see the team building Lothric deeply cared about what others would experience in their world.

What would a Souls game be without wild mythical boss battles!? From the Lords of Cinder to denizens fighting to hold the last scraps of their humanity and more, the cast of Lothric’s champions are all memorable. The count has been whittled down from Dark Souls II and encounters are more focused, ensuring each is fun, frustrating, and overall, memorable. You’ll have some you love, some you hate, and some you’ll never be able to forget. 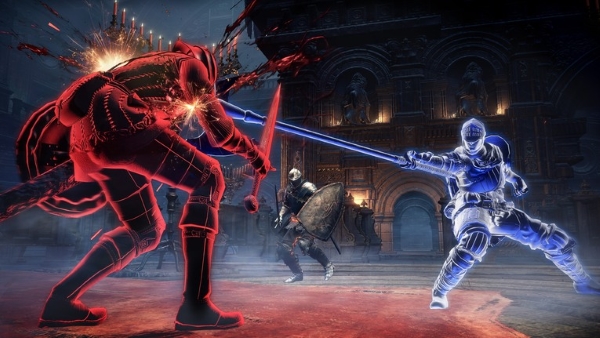 Other players can be both boon and bane

That further highlights a significant aspect of Dark Souls III. Running through Lothric and slaughtering everything in your way is a viable way to play the game, but to do so would be to experience the appetizer without the entree. Dark Souls III is saturated with delicious hidden content only the ardent will ever experience. Yes, the boss battles are fantastic and the world is beautifully designed, but you do yourself a disservice if conquest is your only goal. Take the time to explore, search, and die, and when the credits roll, you’ll feel so satisfied, you may never want for another game.

I’m being a bit dramatic, sure, but if you really want to get inside the mind of folks who so staunchly defend Souls games, this is your chance. We continually come back to the well because the every aspect of the game is so incredibly well done. I’m not typically the sort of gamer that goes through a campaign more than once, but I’ve already finished Dark Souls III once and I easily see myself going through it two to three more times. It’s really that good. 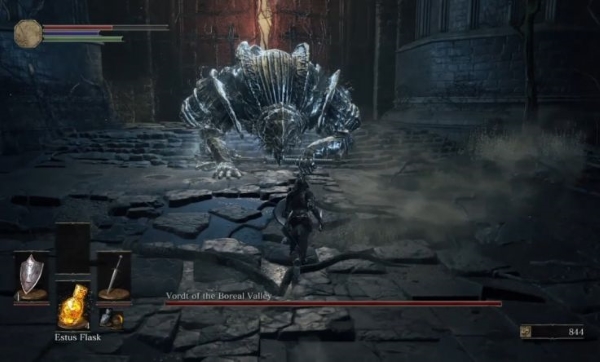 Prepare to die. A lot.

At the end of the day, there’s no denying that Dark Souls III has earned its place as the franchise’s final entry. The world is beautiful and engaging, encounters are intense and memorable, and there’s more to explore and discover than a single fifty hour playthrough can warrant. While newcomers will struggle to break through its learning curve (and may want to rent it first), those who persevere will find themselves enjoying one of the richest, most rewarding games I’ve ever experienced. FromSoftware has once again shown why they alone remain masters of their domain.

FromSoftware has given fans more of what we crave. Though not as many bosses as Dark Souls II, the world in Dark Souls III is beautiful, the enemy design is as strong as ever, and there's plenty to explore and experiment with. Fans of the franchise will cherish their journey through the kingdom of Lothric.