A Hell of a time 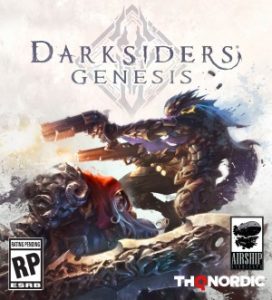 Darksiders Genesis comes at a time when games are on the verge of a renaissance. Services like Geforce Now and Google Stadia offer the options of streaming gameplay over the internet, eliminating the need to even own a console. However, while Darksiders Genesis launched back in December for PC and Google Stadia, it only recently hit home consoles on February 14th. As a prequel to the first game, Genesis offers players the chance to step into the shoes of Strife, the wise-cracking fourth horseman of the Apocalypse who has so far only made cameo appearances in the other mainline titles. Genesis is a spin-off title developed by Airship Syndicate, which includes some of the original creators of the Darksiders series who are returning to the franchise for the first time. 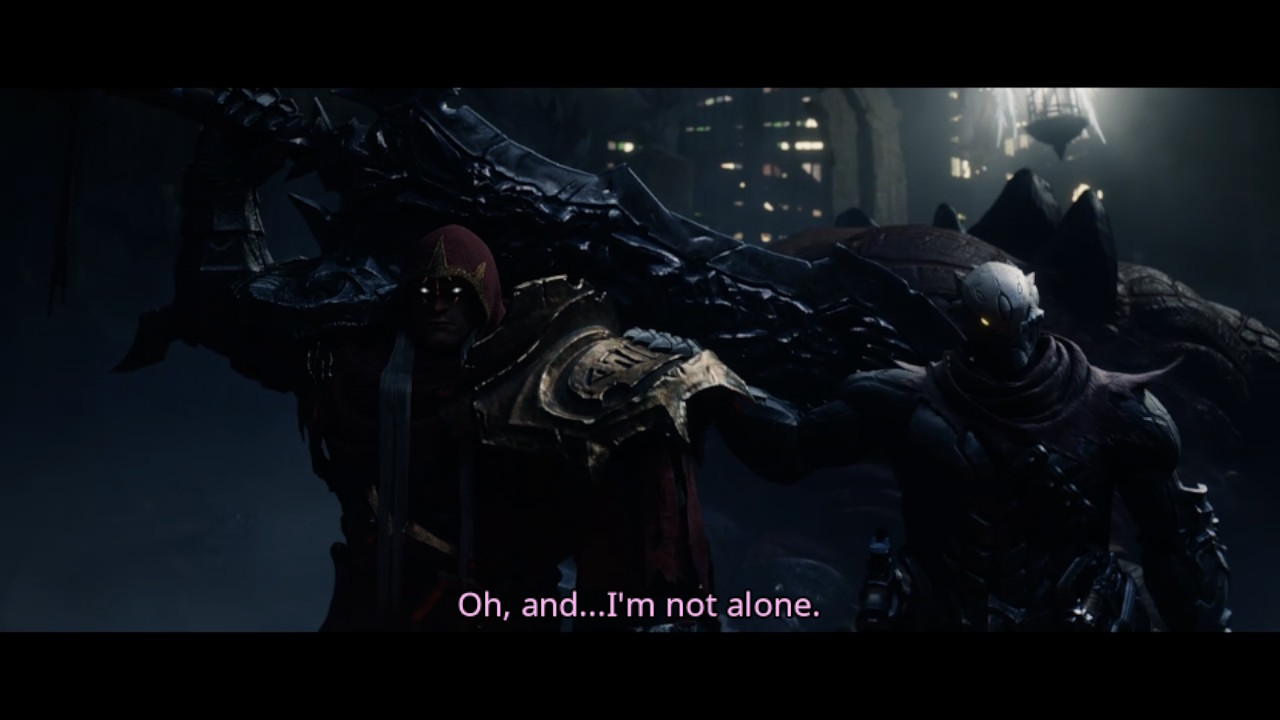 Players will get to experience the bond between two of the horsemen, as Strife brings his brother War along on his quest to track down and defeat Lucifer.

There is language like “hell” and other minor words used. “Hell” is used in both contexts here as a description of the actual location and as an expletive. I did not hear any f-bombs or anything worse that damned, since any use of these words is typically related to Hell and damning someone there. There is violence, gore, and blood galore, however; but the art style is reminiscent of the other titles in the series and it feels like playing a comic book. The Teen rating is appropriate here as the action never zooms in close enough to really see any of this. The dark and hellish themes may also be a bit much for younger players, so use caution when deciding if you want your kids to play this game. If they have played other games in the series, this one is no different.

Darksiders Genesis acts as a nice stop-gap between the polarizing Darksiders 3, THQ Nordic’s first new entry in the series since acquiring the franchise, and the inevitable Darksiders 4. However, instead of the typical third-person, dungeon crawler gameplay, Genesis is more in the vein of Diablo, Torchlight, and other action-RPGs. But players shouldn’t let the new isometric viewpoint get them down—this is still a Darksiders game through and through. 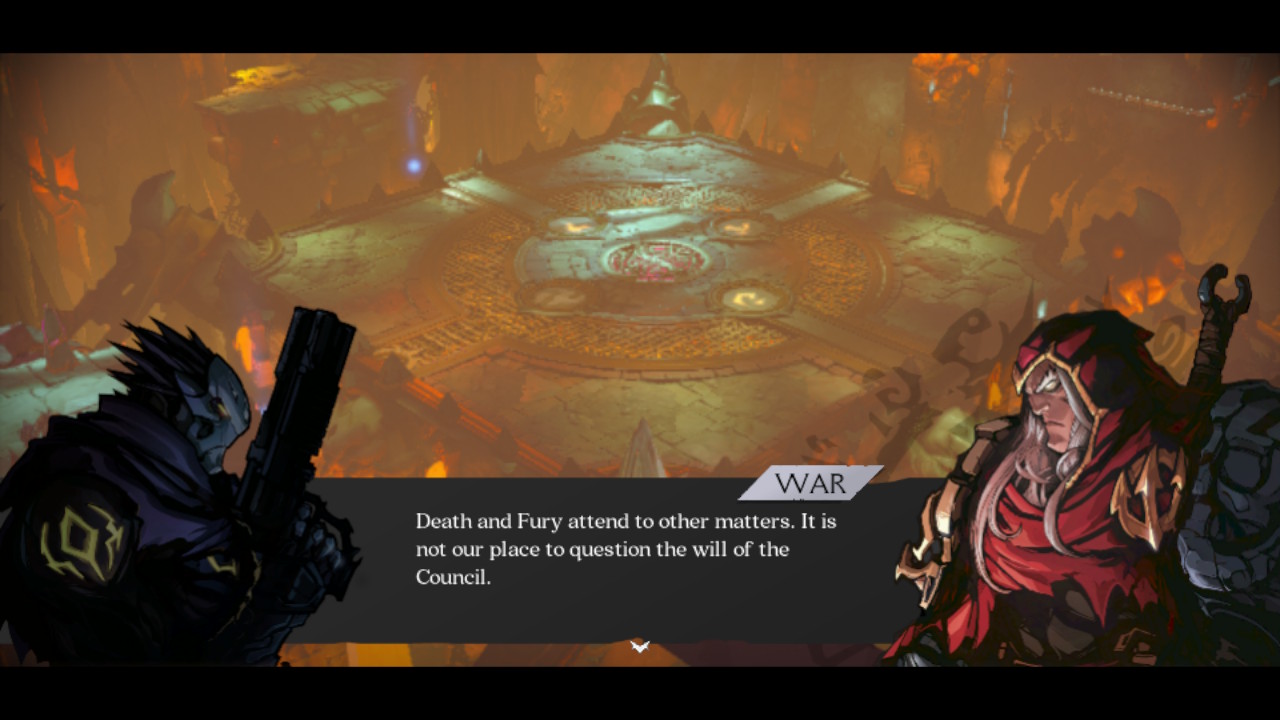 In the first couple of chapters, Darksiders Genesis addresses the absence of the other horsemen.

Acting as a prequel to the first game, in Genesis, Strife has been sent to deal with the demonic hordes rising up against series antagonist/occasional ally demon Samael as his fortress is being besieged by Lucifer’s army. But Strife isn’t alone, his brother War is accompanying him on orders from the Charred Council as the pair work their way through Lucifer’s minions while doing the bidding of the demons Vulgrim and Samael in their quest to locate and defeat Lucifer. 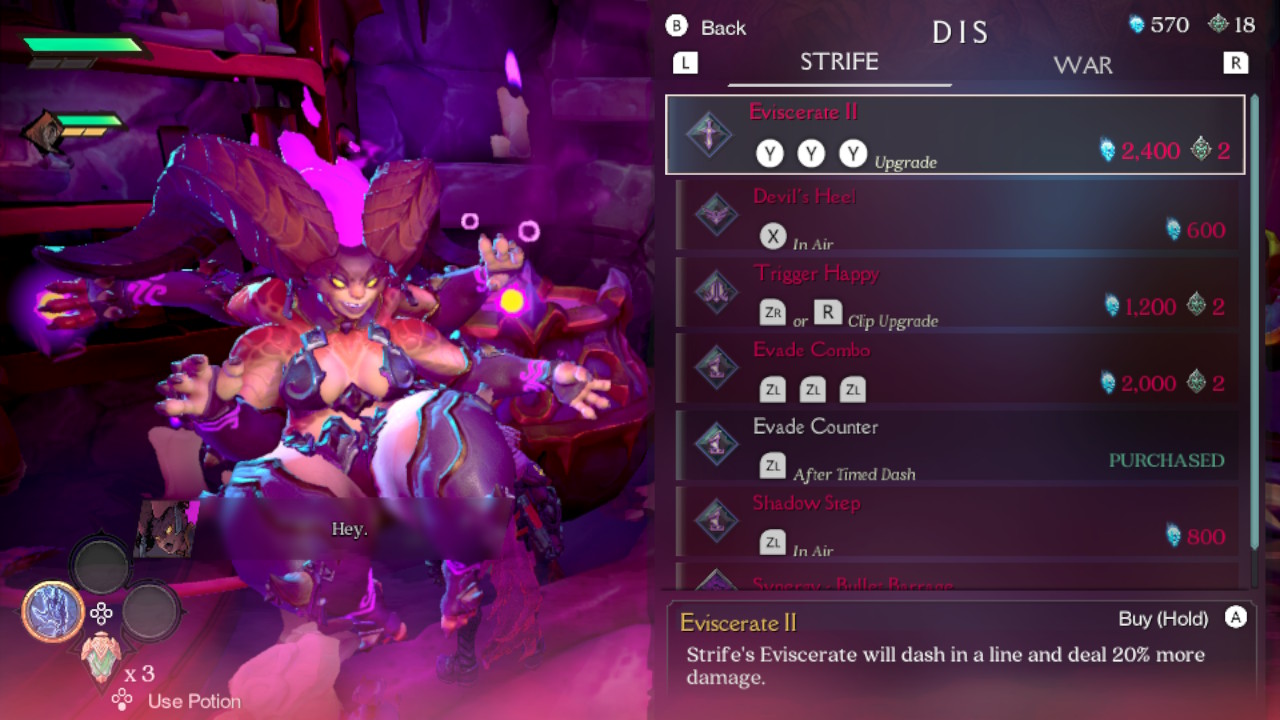 Dis, like Vulgrim, inhabits the Void, an explorable hub between worlds, and offers players the ability to purchase new abilities and combos with collected souls and boatman coins found in each level.

War’s arsenal of weapons and special moves are pulled straight from the first Darksiders game, including the glaive used to light torches, attack enemies, and solve various puzzles. In this way, the gameplay remains nearly unchanged. Oddly, the loot mechanics from Darksiders 2 are absent and there are no longer hundreds of variations of different gear pieces to collect—just various bits and bobs that will upgrade Strife and War’s wrath meters and health bar. Other collectibles can be used at Vulgrim’s shop to purchase upgrades, creature cores, and other enhancements.

Creature Cores are the newest addition to the franchise and offer some light RPG mechanics. Once collected, creature cores can be slotted into a grid shared by both War and Strife. Certain boss cores, denoted by their orange color, will award huge stat boosts and even some nice passive abilities, like the chance for a shadow clone of Strife to appear and shoot at enemies every time Strife dodges an attack. Different types of ammo can be found for Strife’s dual pistols and these offer varying attacks that deal significant damage to bosses. Meanwhile, War can collect different abilities like his familiar glaive and gauntlet which can be used both in and out of combat. This encourages players to return to previously completed levels as you won’t always have the necessary gear to reach a collectible or unlock a secret area the first time through. 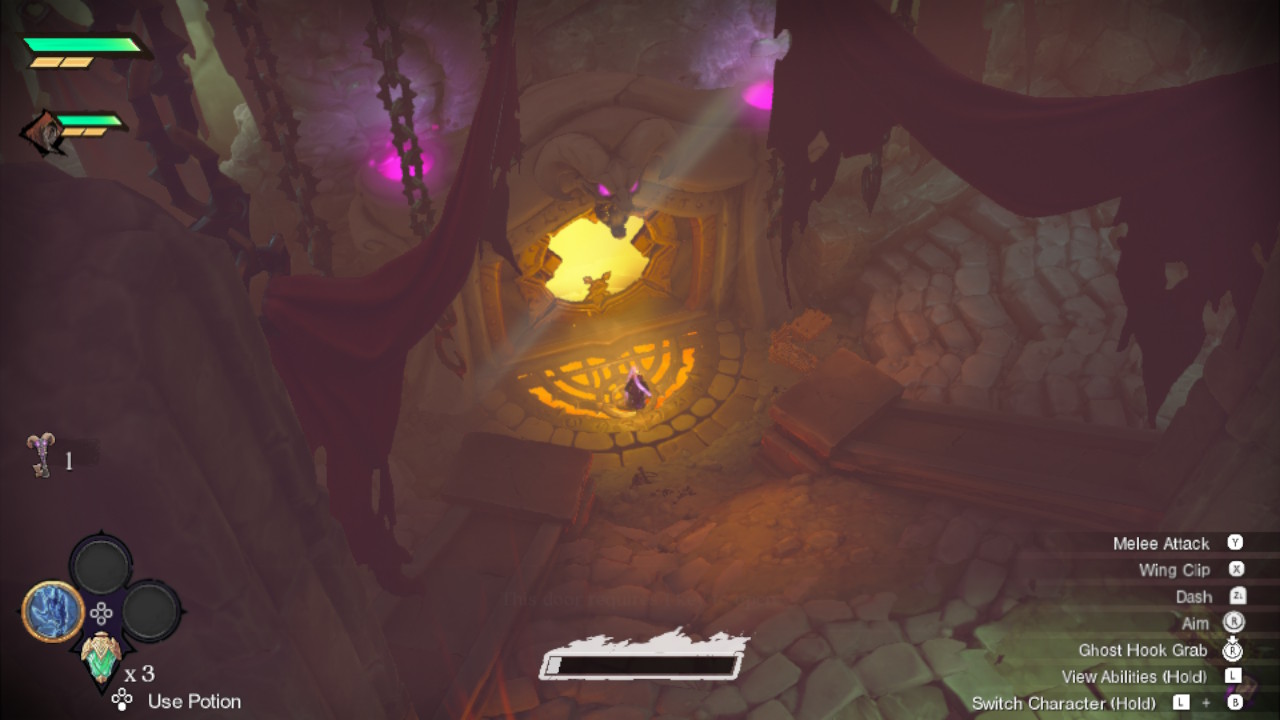 There is at least one Trickster Door in each level and these can be opened with Trickster Keys hidden throughout each environment.

Speaking of secret areas, every level offers a host of secret passageways and Trickster Doors that can be unlocked with Trickster keys that are often cleverly hidden in some hard to reach areas. Keys can be carried over from one level to the next however, so players needn’t worry about find every key on a level to unlock it’s specific door. Behind these doors are collectibles and various combat and puzzle challenges that yield rewards such as health and wrath upgrades or Abyssal Armor pieces.

Combat is fluid and fun for both War and Strife and surprisingly Strife can hold his own in melee combat as well. Each horseman has their own Demon Form which can be triggered once a meter is filled during combat encounters. These last about a minute or so, but offer the chance to dish out massive amounts of damage to bosses. Larger areas of levels even allow for combat on horseback as each horseman can summon their trusty steed in the more wide open levels. 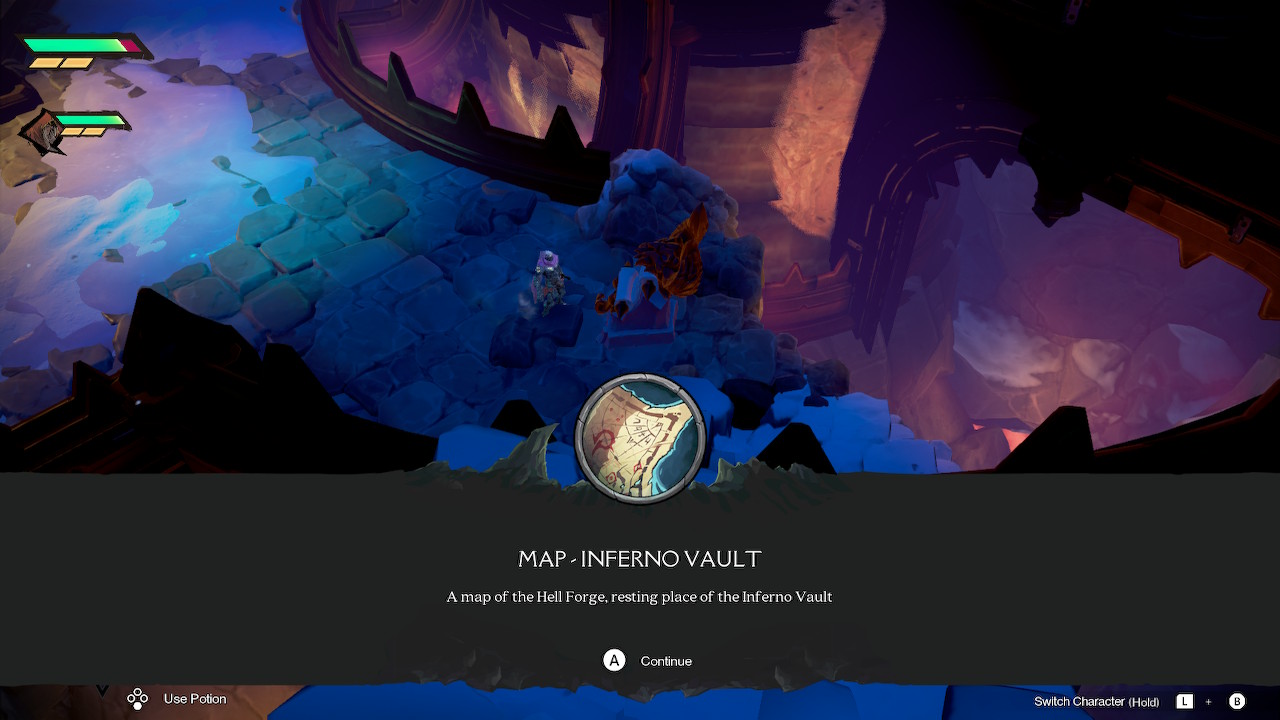 Finding a map chest reveals the location of all collectibles in a a given area though players still cannot see their exact location on the map.

I only have one or two minor gripes about Darksiders Genesis. First, the camera angles are fixed and cannot be adjusted. If the player character becomes obscured by a part of the environment, players can still follow along with the action thanks to a handy outline that appears around Strife/War and any nearby enemies. However, this makes some platforming and puzzle sections extremely frustrating, as you can’t always easily see the torch you’re supposed to light or the switch you need to activate. Also, sometimes having to change up gadgets or characters on the fly can be a bit cumbersome as this requires holding down the L Button and then pressing B to switch to War or Strife. Certain characters have certain gadgets and abilities that can only be used by them, so when players are not playing co-op, they will need to be proficient in switching between the two. With some puzzles having a time limit to completion, having to switch between characters on the fly and accurately have War throw the glaive or Strife create portals can become tedious. Also, the map can be confusing at times as there is no arrow to indicate where the player is in relation to the various collectibles, chests and mini-bosses displayed on the map screen. 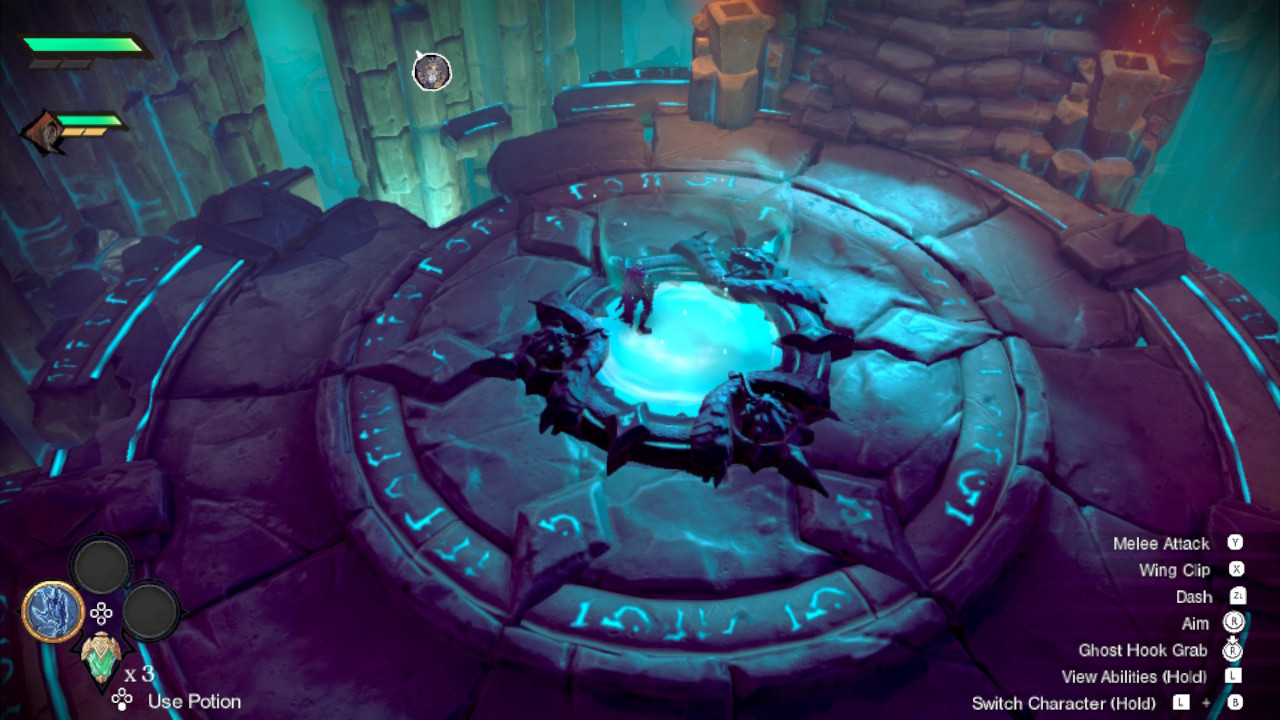 Vulgrim’s Serpent Holes make a return here and act as a portal between the Void hub-world and the different levels that the Horsemen explore throughout their journey.

Despite these minor grievances, I loved Darksiders Genesis and they nailed the new play-style offered with the isometric viewpoint. Combat still feels like Darksiders, but the top-down perspective encourages more exploration and feels unique to Strife’s first adventure in the series. I can’t wait to see what Airship Syndicate and Gunfire Games do with this series going forward. Fingers crossed for a Darksiders game that has more familiar and traditional gameplay we have come to expect from the series with all four horsemen playable.

While a spin-off of the main series, Darksiders Genesis is nevertheless the quintessential Darksiders experience.