When I was young, video games were just coming into existence, and licensed games were, well, literally the origin of the term “shovelware”. Nowadays, we have Spider-Man, the Arkham series, and… DC Superhero Girls: Teen Power! Exclusive to Nintendo Switch, Teen Power is aimed at likely fans of the show (7-to-12-year-old girls) as a “gateway game” towards action/adventure games like Horizon: Zero-Dawn, Spider-Man, or The Legend of Zelda: Breath of the Wild. I enjoy those games quite a bit, and I just so happen to have a 7-year-old daughter. What’d we think? Let’s find out! 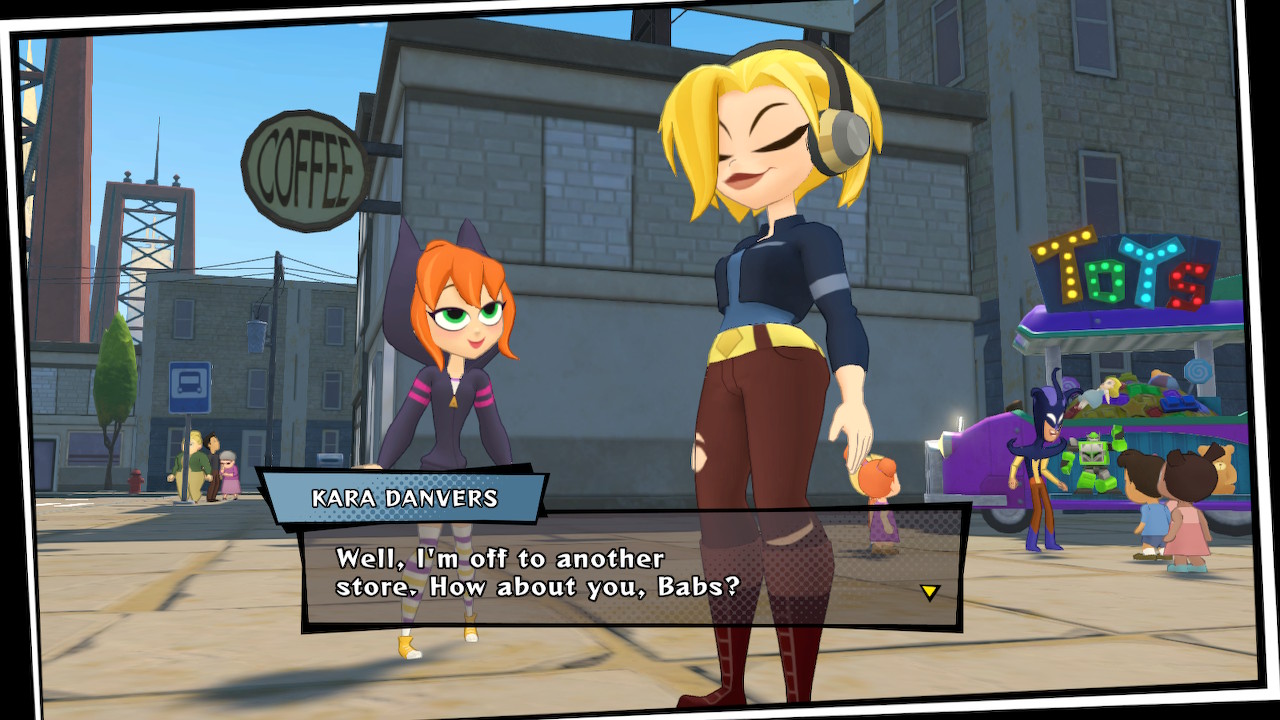 Just a chill day for some superhero girls…

Violence: While it is cartoon violence, the game is violent throughout. For the most part, the superheroes are “just” fighting robotic toys gone rogue, but there are times when characters fight other humans (e.g. burglars, villains piloting machines). If there was a reason to avoid this with your children, this is probably it. For what it’s worth, while the game is rated E10+, the show is rated Y7, so I let my 7-year-old play the game.

Sexual content: I am incredibly thankful that this game makes zero effort to sexualize the main characters. They do wear superhero outfits that are skin-tight and/or reveal legs, but there are no intentional efforts to sexualize anyone’s bodies. There’s an accidental effort, though: an automatic camera in the game took upskirt shots of my characters on three different occasions (more detail in the review proper).

Another more subtle problem is that Star Sapphire’s forceful obsession with Hal Jordan is incredibly problematic, and the only example of a boy / girl relationship in the game. It is worth talking with your children about treating others with respect and respecting yourself, particularly if they are closer to that tween age and more “aware” of the opposite gender. Despite these two gripes, I was really happy with how much the game made a conscious effort to avoid sexuality. 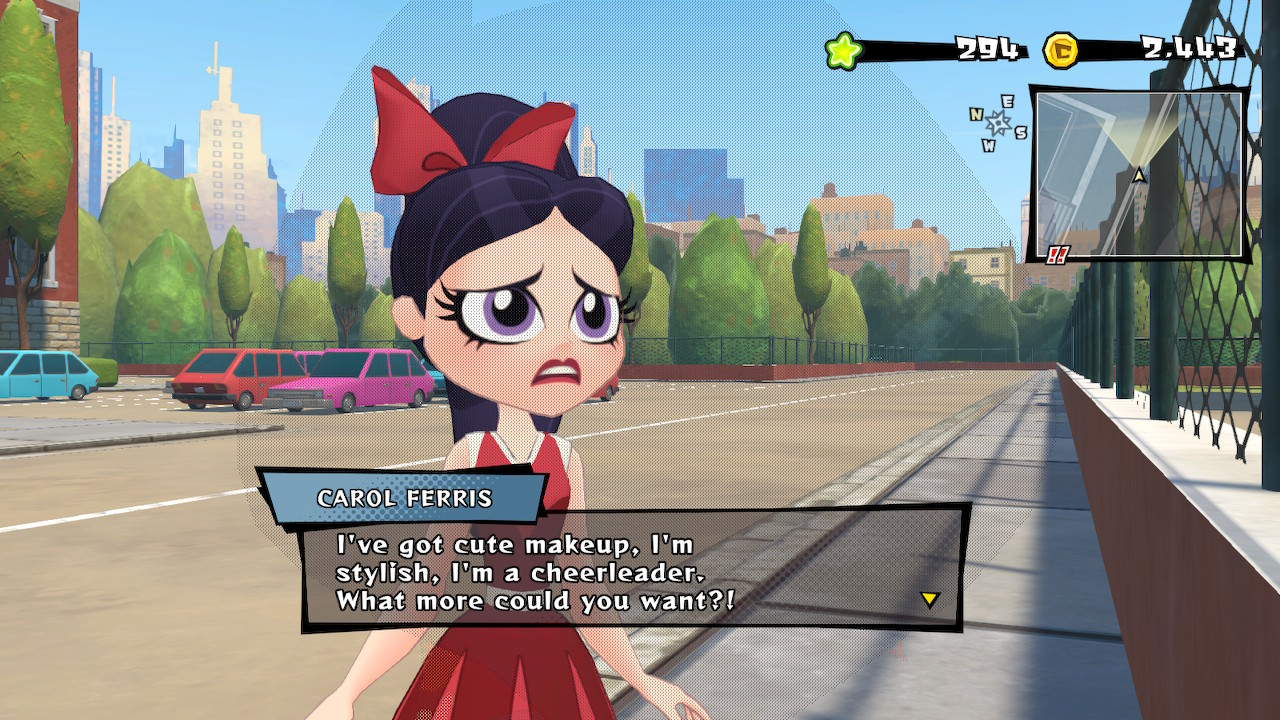 Language: I do not remember any swear words; but there are most likely instances of “stupid”, “darn” and the like, which may or may not be okay in your house hold with younger kids.

Spiritual themes: The game does not delve into any origin stories or why characters have supernatural powers; it’s more focused on teen drama and weaponized toys. However, Wonder Woman uses “Goddess Hera” as the equivalent of “OMG”.

Other Negative Content: The game has an in-world social media app called “Supastapost” and it is heavily integrated both into the narrative and the gameplay. For example, one optional mission can’t be undertaken until you have 300 “followers”, which you get by taking photos and posting them to social media. The game then notifies you when other people comment on your posts. I do not need my young children to become obsessed with social media, and I wish this was not in the game at all. At one point, my 7 year old was upset that I was ahead of her in the campaign, and said “Oh yeah, well how many followers do you have?”. My soul was crushed. 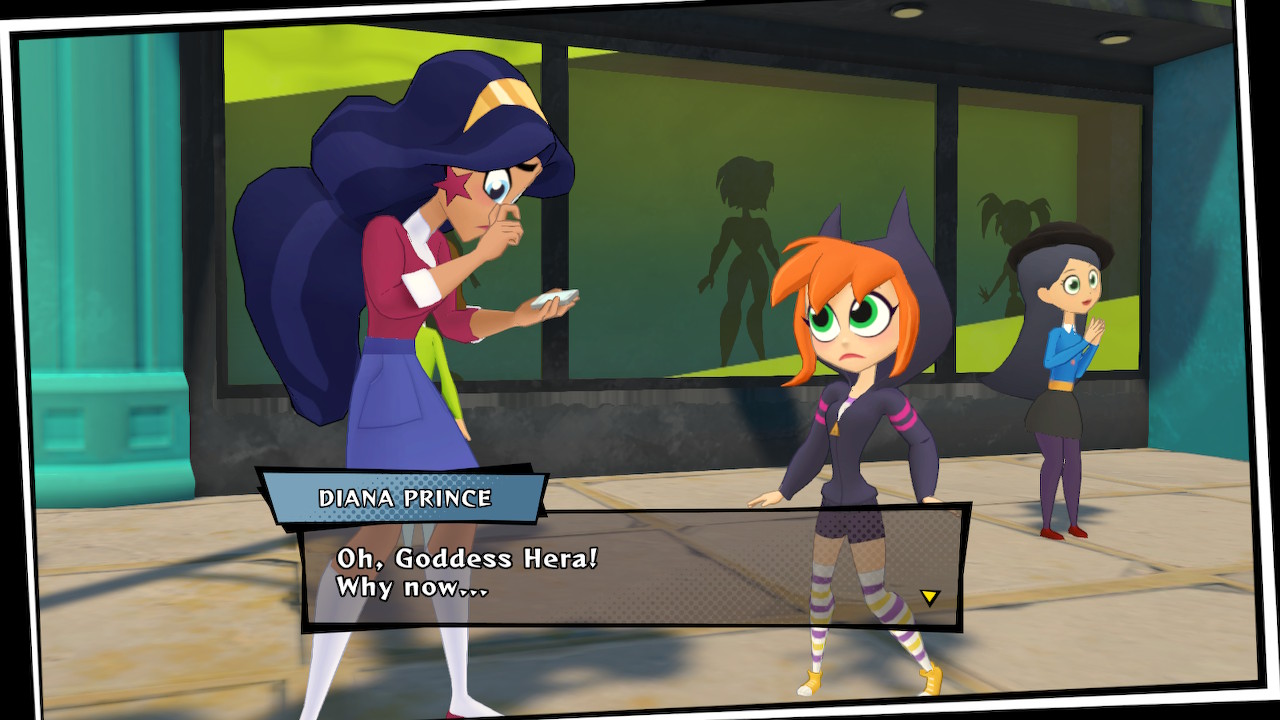 First off, let’s give some context. I am not very good at action/adventure games; JRPGs are my bread and butter. However, I’ve thoroughly enjoyed games like Horizon: Zero Dawn, Jedi: Fallen Order, and of course every iteration of The Legend of Zelda. DC Superhero Girls: Teen Power is basically an action adventure gaming on training wheels, preparing the youth for the digital adventures that lie ahead in the future. In a lot of ways, the game succeeds in this main task. 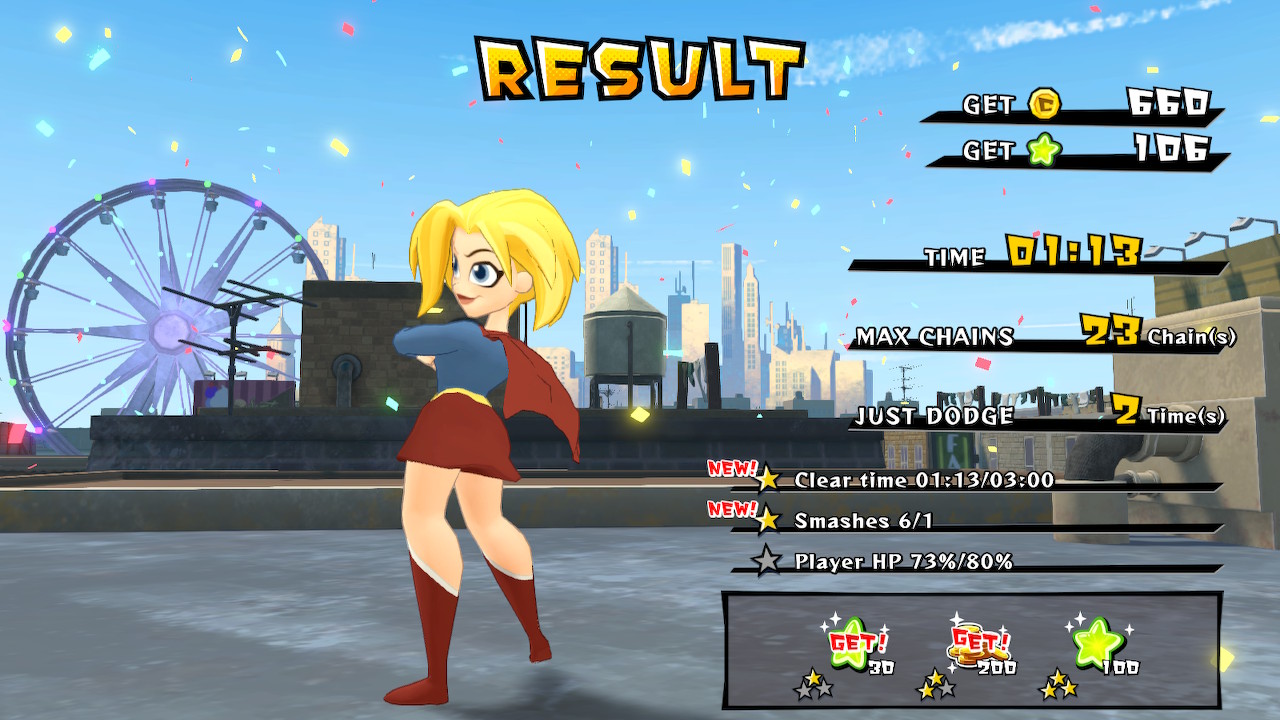 Rewards for completing a mission. I never got all possible rewards, because I suck.

Most of the gameplay involves you either wandering around town working on side quests, or proceeding through the storyline via combat sequences. The combat and its controls are where a game like this lives or dies, especially for young children less concerned with the barebones, predictable, but serviceable story. The combat works, although it certainly isn’t as smooth as the games it models itself after. Flying around as Supergirl (and later Star Sapphire) was enjoyable enough that I never really wanted to use other characters; it was also “nice” to avoid having to worry about platforming altogether. The only control I really found problematic was landing from flight, it seemed like you had to come to a complete standstill before the B button would take you to the ground, since it has other functionality while in the air too. 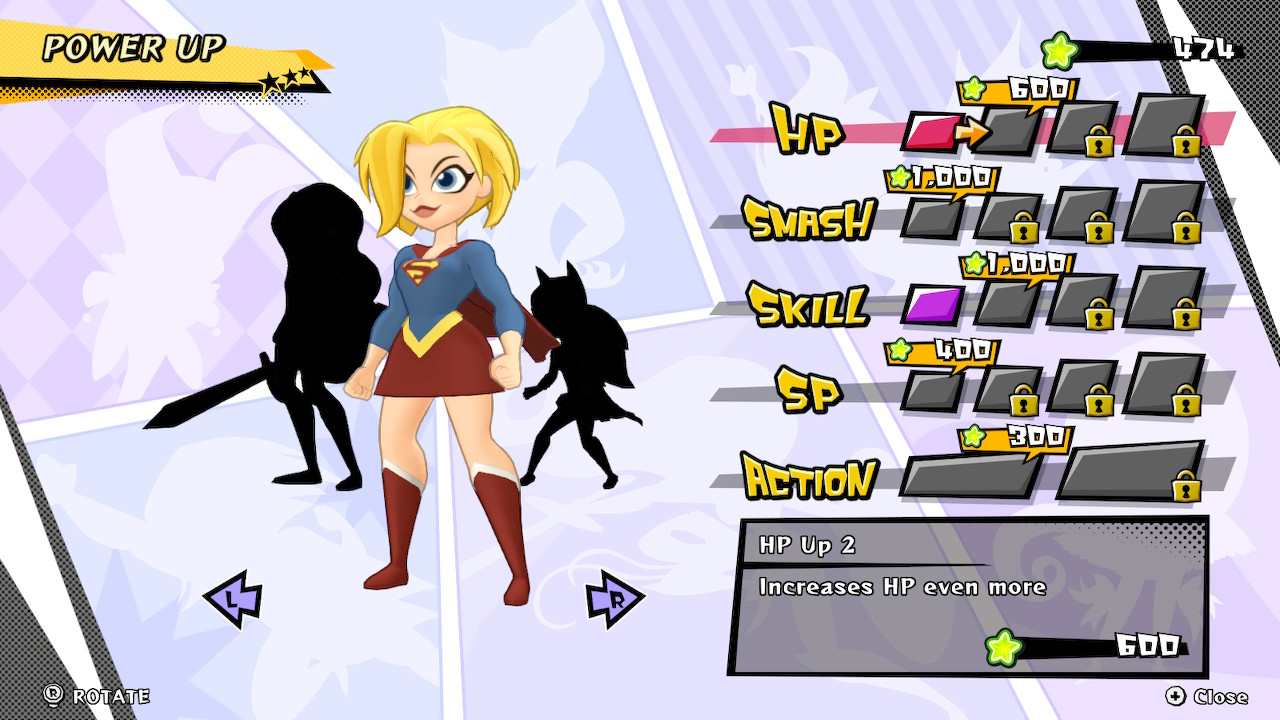 Each character has three different special skills that can be acquired and upgraded through “power stars”, and you can also boost HP and “smash attack” power. I thought this was the right level of introduction to a skill tree, and my daughter thought it was amazing once she saw it (“How’d you get Heat Ray, dad!?”) and she quickly understood the concept.

In addition to upgrading combat skills, there are quite a few options to upgrade your character’s look, and my daughter was dissatisfied with the minimal amount of time I spent playing dress-up. Players can buy various new clothing articles at shops in the city, and as part of the game’s attempt to accommodate the Switch’s lack of trophies, the in-game percent completion counters for each character include the percent of clothes available that you’ve purchased. I feel like that’s sending the wrong message to my kid, but on the other hand, I’m just grateful to see percent completion counters, although I could not find a clear and distinct way in the Mission log to see percent completion of side missions. 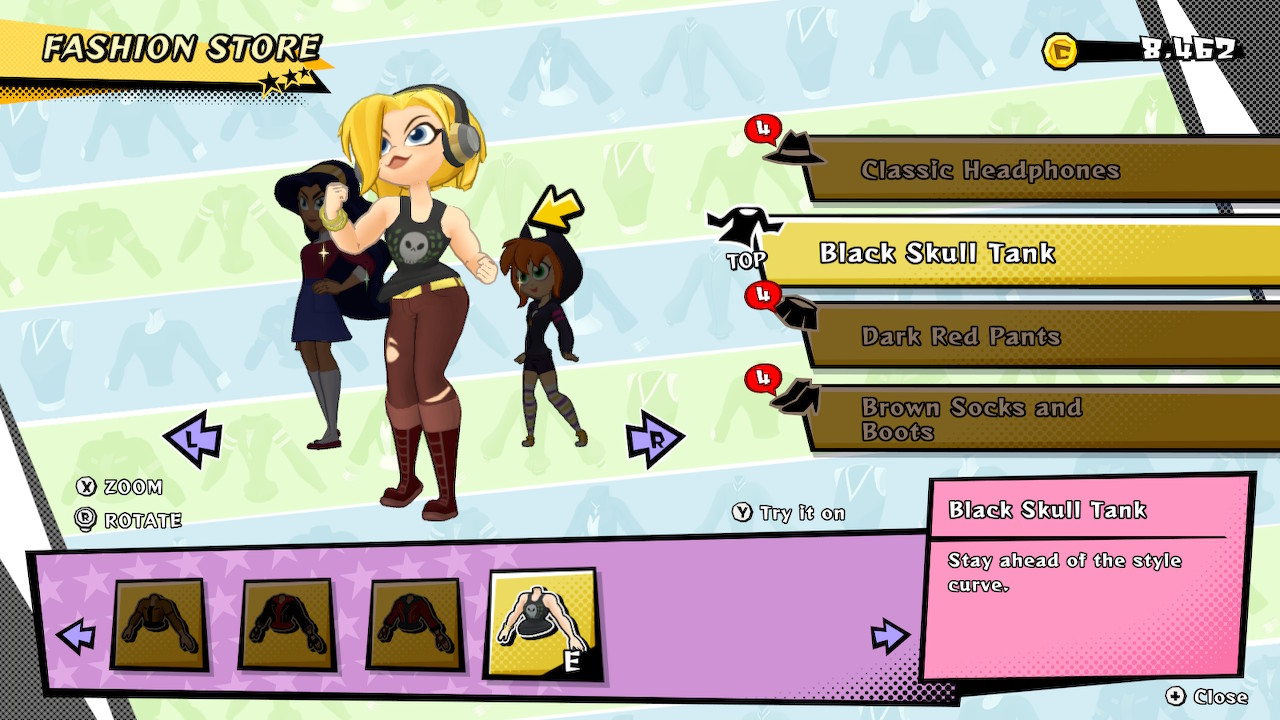 I made “goth” Supergirl, then never touched the clothing again.

And for a game of this size, the side missions are plentiful. The actual tasks are typical: fight some bad guys, take some photos, find some stuff around town and report back, etc., but it’s not like other action/adventure games can do much better. And getting the extra money and power stars sure feels great, especially when you are close to an upgrade.

An adult buying this for themselves might feel like the game is too shallow or short, but for its intended audience – as a stepping stone for late-elementary children towards bigger games — it really does a fantastic job, for the most part. However, I have a few complaints, all of which could be fixed in a post-launch update. Here’s your chance, devs! 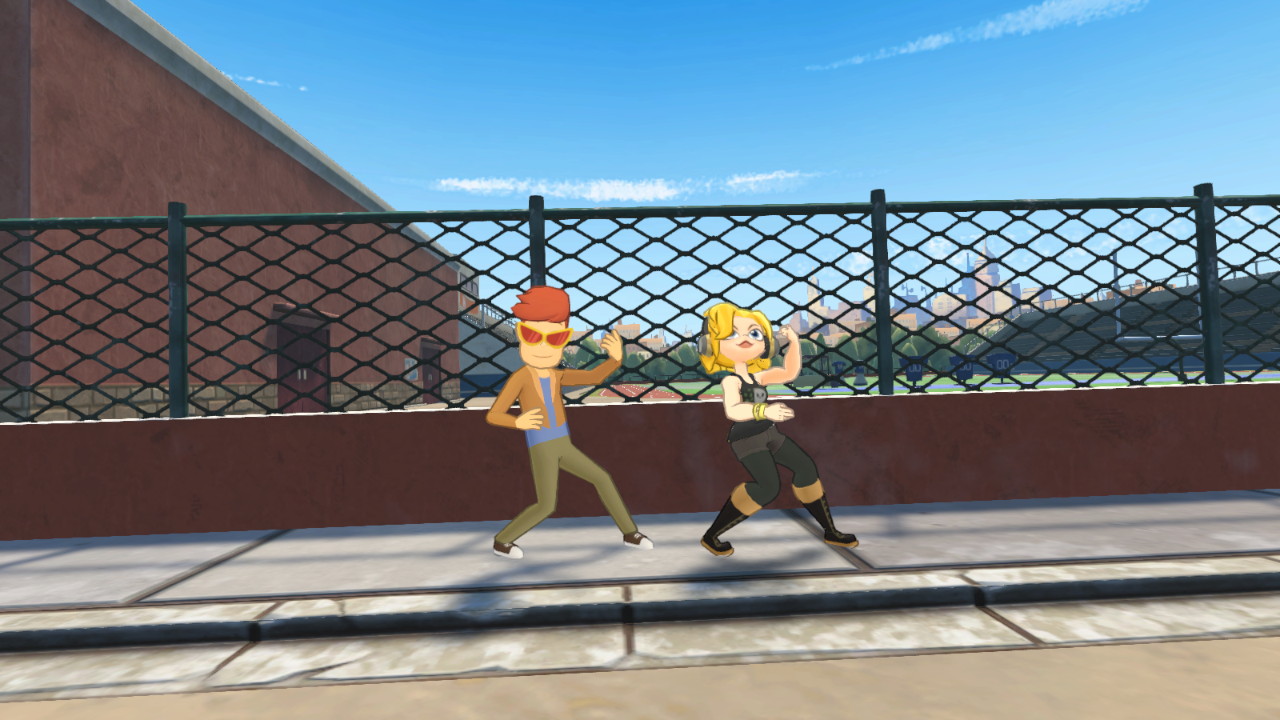 One of the photo-op side quests.

The most egregious omission is the lack of any kind of difficulty settings. Given the targeted age range, I’m completely shocked by this. It doesn’t have to be complex; it could simply be increasing damage output and decreasing damage taken for characters. But several times I found my frustrated 7-year-old asking me to do a mission for her, and she’s not exactly new to gaming, having beaten Super Mario 3D World and Bowser’s Fury both by herself a month before. The second big omission is the lack of save slots. There is one spot to save, to the extent that if you start a New Game+ after completing the game, it erases your prior game saves! That’s lunacy. I’m currently playing Tales of Xillia on PlayStation 3 — a ten-year-old game on fifteen-year-old hardware — and I’m allowed fifty save slots. There is no reason for this. I played the game on our original Switch and my daughter played it on her Switch Lite, but we had to be careful with cloud saves to make sure we didn’t overwrite each other. Having two (or hey, maybe a dozen) different save files would have been much less headache.

My other complaints are minor, but still notable. There is an in-game feature that takes a “victory” photo when you finish a mission, and then slaps it on a newspaper with a headline, e.g. “Superhero Girl Defends Local Comic Shop.”. It’s a fantastic concept, but players have no control over the camera and ninety percent of the pictures look terrible. Most of the pictures are just useless blurs, but on three separate occasions the camera basically took an upskirt shot of my character. Fortunately, my 7 year old doesn’t yet understand why private parts are private, but this could be a real problem for older kids (or adults streaming this game). If the camera isn’t salvageable, simply replacing it with a stock photo — maybe a generic cartoon drawing illustrating what happens in the mission — would be better. 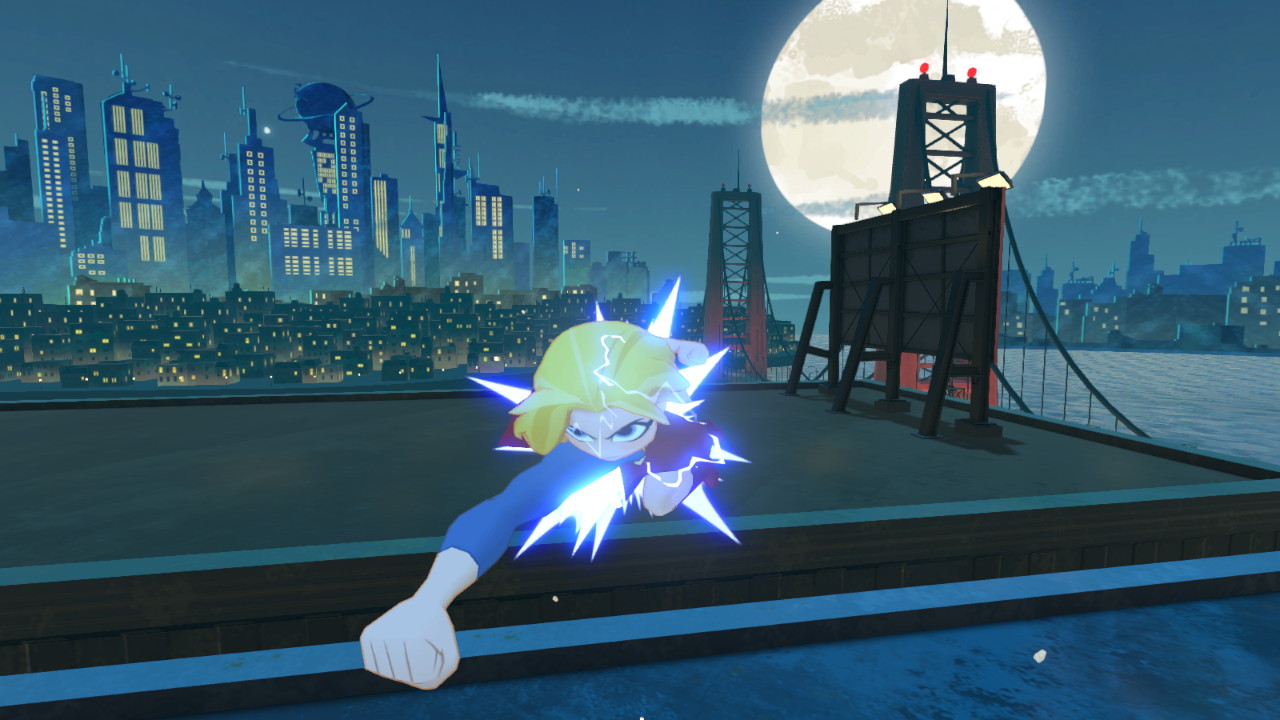 One of the -good- automatic photos, although the lightning is an enemy attack. I’ll spare you the bad ones.

Lastly, this is more of a wish: I hadn’t really delved into Nintendo’s promotions for the game, so I didn’t know you could play as some villains which was a really fun surprise, but I was equally disappointed that you couldn’t play as Bumblebee, Zatanna, or Green Lantern. Here’s to hoping we see some DLC along with those patches, because I would happily keep playing this with my daughter. It really is a great introduction to the genre, despite the quality of life problems.

Despite some quality of life issues, this is a great introduction to the action/adventure genre for its target audience.