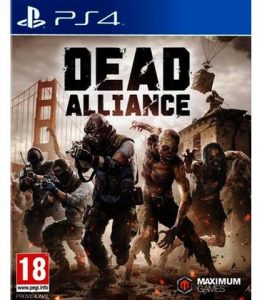 More and more these days, we continue to receive zombie-flavored entertainment. Whether it’s a new movie, TV show or video game, they do not always try something new. When the medium is so heavily invested in it’s a shame we do not get new ideas.

Maximum Games decided it was time to break the mold when they came up with Dead Alliance. Most of the time a game runs you the human versus the zombie, or vice versa. Dead Alliance flips this medium around and reinvents a genre that would be considered to this point stagnant.

Violence: With flesh-eating creatures roaming around while you shoot at other soldiers, one would assume violence would be a heavy part of this game. You can add plenty of blood and gore in with the violence. Plenty of limbs and body parts fly around as you fire your weapons at your foes. 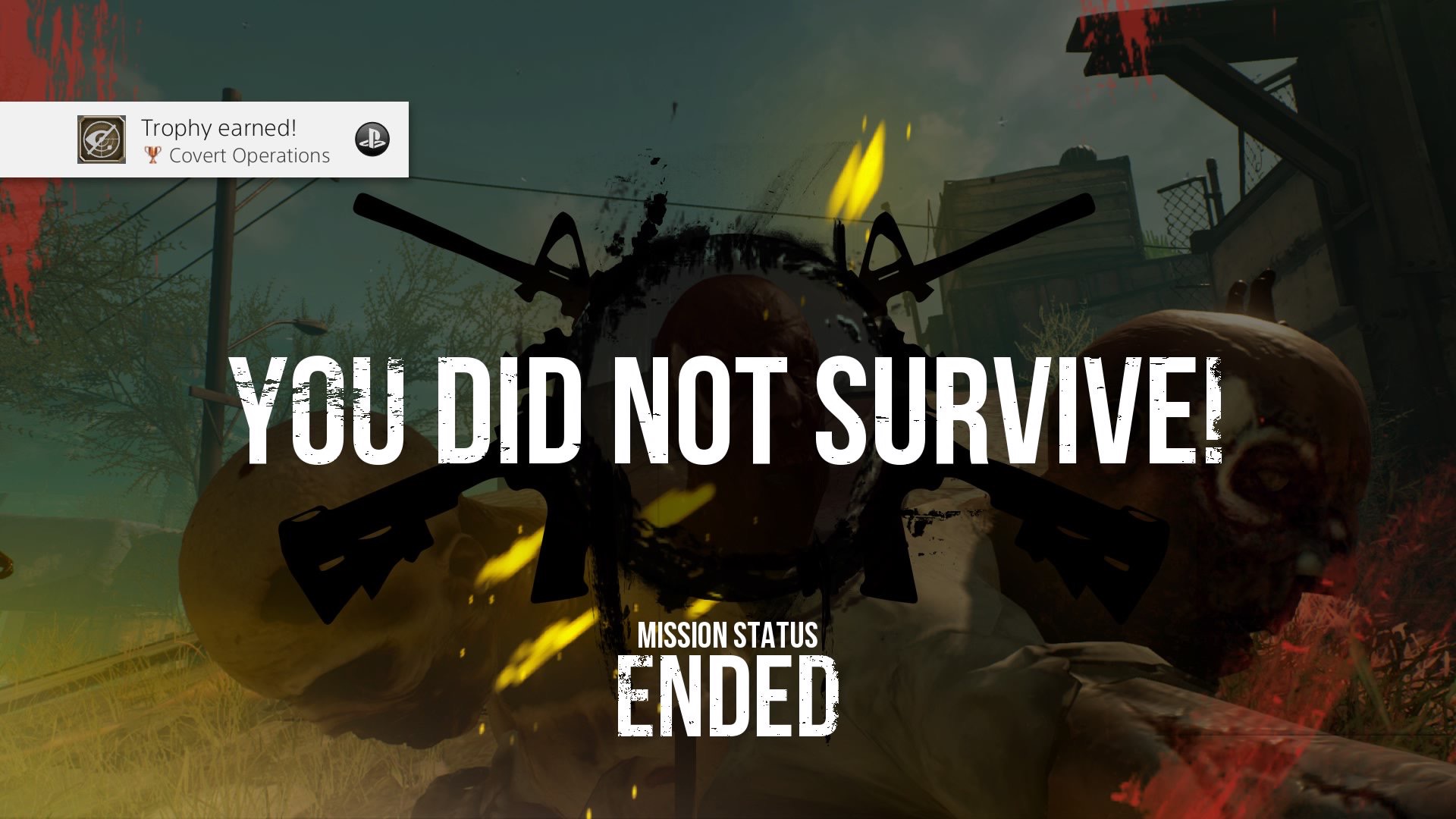 Language: The single player horde mode is filled with offensive words. As your compatriots communicate with you over the radio, they use curse words both major and minor. There is no point in these and they do not serve to build the story.

Dead Alliance and I find ourselves at a crossroads. On one hand I love the concept. On the other, I think the execution could be better. The game is also well priced and keeps you from feeling like you overpaid given its lack of a story mode. Let’s get right into the nitty gritty of why I came to feel the way I do.

Dead Alliance really changes the way you think of a zombie shooter. Instead of fighting zombies, or playing as a zombie fighting a mercenary, you fight other factions while zombies populate the map. Do not think you’re in a basic shooter however, as the undead serve a purpose. The zombies can both be used to destroy you and your opponents as you attempt to eviscerate the other team.

This leads to an interesting back-and-forth. The zombies are your friends, but also your enemies. They might be bullet bags but they are not pushovers as they can kill you if you are not careful. The way you can get them on your side is special grenades. Some of my favorite moments of gameplay involve chucking an explosive and watching my buddy tear into a baddie. 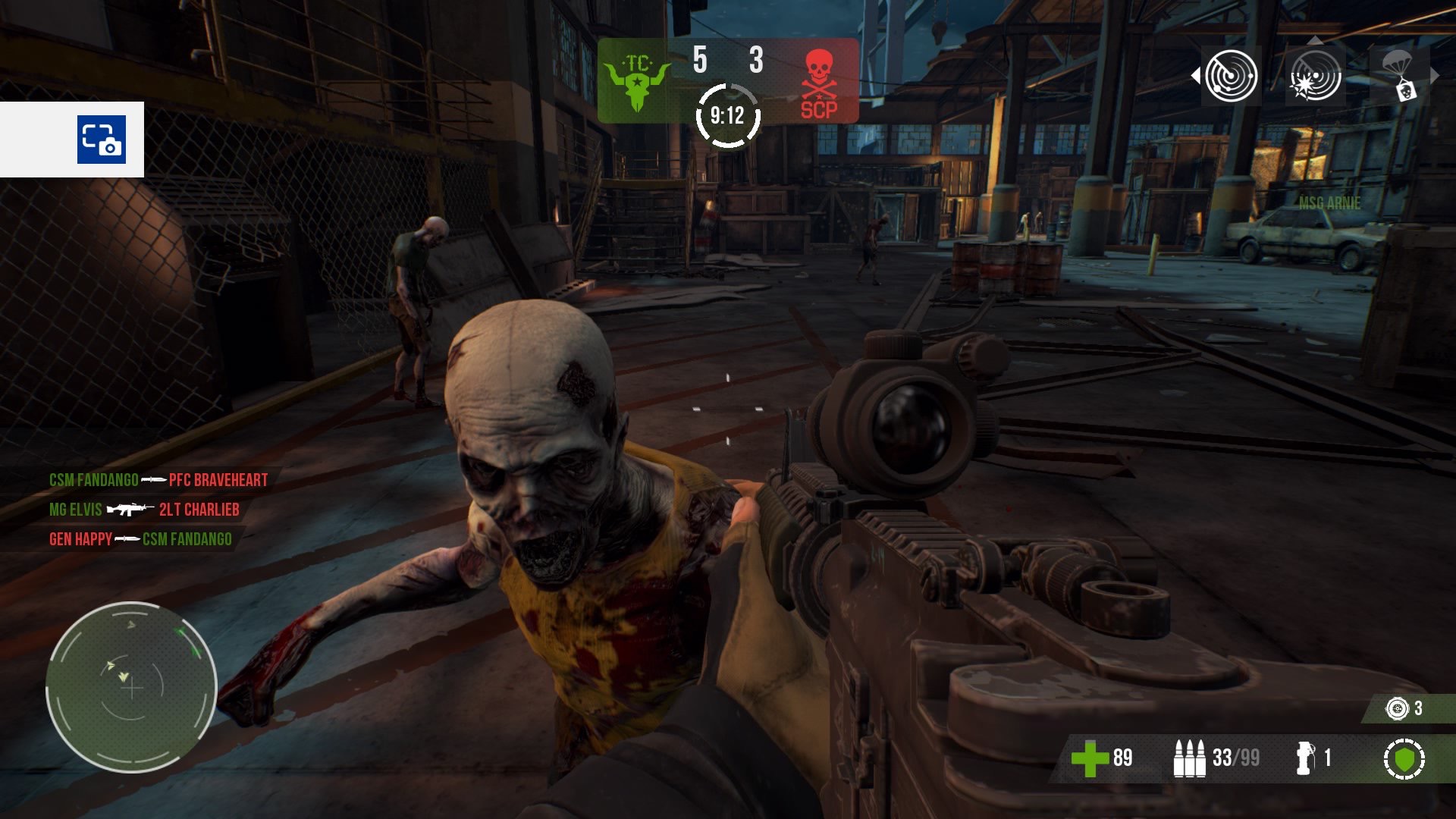 Around this mechanic, there is a decently solid shooter. The gunplay packs a punch many FPS’s miss in development. You want to feel like you are firing an assault rifle when you get hold of one in a game. Maximum Games succeeds in giving me a fun, action-packed firepower. The hit animations can be a bit shaky though; the knife in particular is slow and does not feel satisfying to use.

The graphics is an area where improvement is needed. Pretty visuals are not always the focus of a game, but in this case they are lackluster. Dead Alliance is closer to PS3 than PS4 in look, and can chug a bit like the former. I also had a few issues with zombies levitating over to me or other combatants. However, this does not stop Dead Alliance from being fun to play.

The modes are your standard affair, but there are plenty. Team Deathmatch, Free for All, King of the Hill, and many others make up the online and offline options. The mode I enjoy most is Free for All, where you are free to just run around and try to kill as much as you can. The good news is Dead Alliance is easy to jump right into. I quickly made use of my familiarity with shooters and busted some heads. 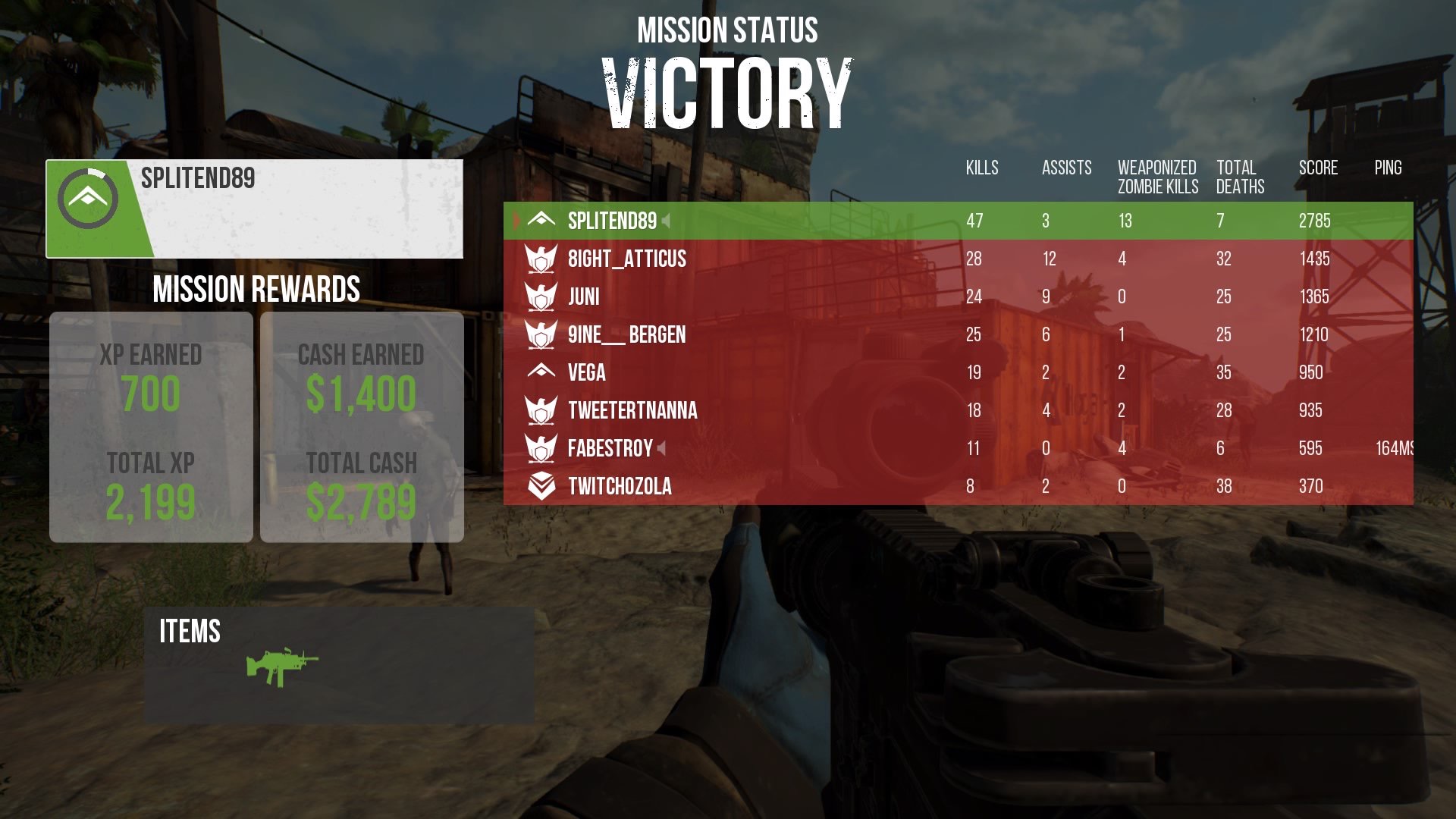 My first game. No clue how I did that well.

Another mode done right is Attrition. It functions like a MOBA, with lanes with strongholds to take down. While I love Attrition, it could use some work. The first two times I played, the meter for capturing a stronghold did not appear. I had no idea if what I was doing was working at all. By the third try, online it worked, but it should not take that long for any gamer to find out if they aren’t winning or losing. That will quickly deplete your player base.

There are two other things to add and refine to Dead Alliance. The first is the lack of online leaderboards. No form of stat tracking means less competition. One of the reasons games like Overwatch and Call of Duty succeed is building rivalry between players. An easy way to do that is to give them an area to try and one up each other, in other words, a leaderboard.

The second is a refinement to the scoring system. As you will see in the picture below, you have no idea why you are placed where you are in the rankings. There is no correlation between kills, deaths, flags returned or captured, or score to figure why the seven under me are where they are. If online leaderboards will ever become a possibility, it will be because they focus on improving the scoring. 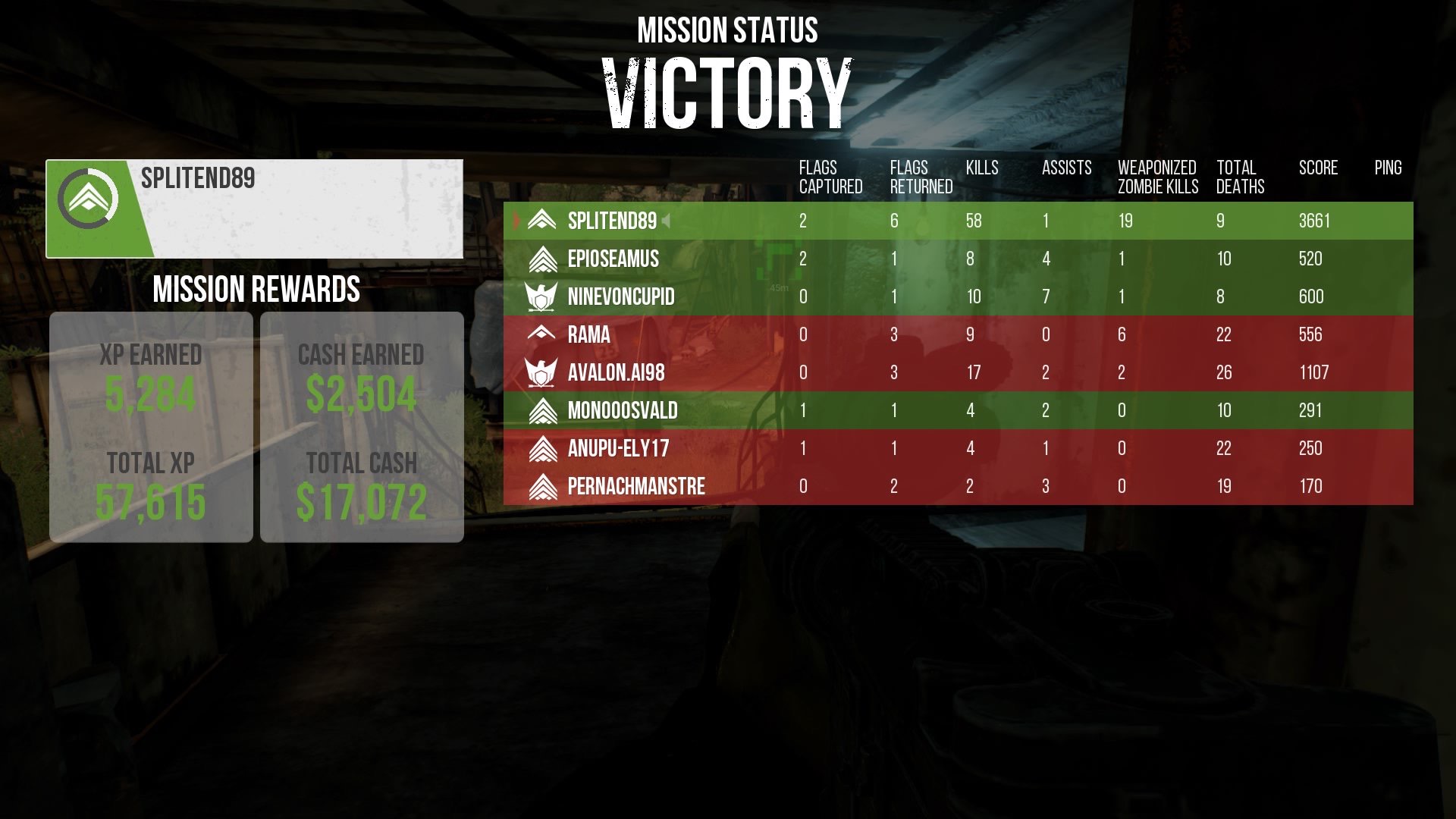 Its obvious I belonged at the top, but what about the people underneath me?

The single player horde mode is tough to review. You spawn in with only a pistol and your wits. This is deceptively hard. You spend your time running from safety bubble to safety bubble as a pathogen falls from the sky, threatening your life. The story of your being left behind is not well written. Your own side has left you to fend for yourself in the danger zone to test said safety bubbles. The zombies chase you until you cannot fend them off any longer. It’s as simple as that.

The level of difficulty is where things really get tough. I died by the fourth wave in my first five tries. After making it to wave five the next attempt, I promptly died again. Once you pass level four, it seems the zombies can get super aggressive. I played some multiplayer and came back to horde mode afterwards and managed to make it to ten. I guess I only managed that by learning the mechanics of the game.

The last feature I want to touch on is the customization. This attribute is the most underrated function of Dead Alliance. There are plenteous items to unlock, and a fantastic array of perks. My favorite perk. Adios!, drops a grenade upon death which can cause up to four zombies to become weaponized. The undead will then race to eliminate your foes. It is simply glorious.

The system can still use a bit of work. I did not earn many upgrade points or money throughout my playthroughs. I like the unlocked loadouts so this is not a big deal. It would be nice, however, to get more than two or three upgrades from over four hours of play. 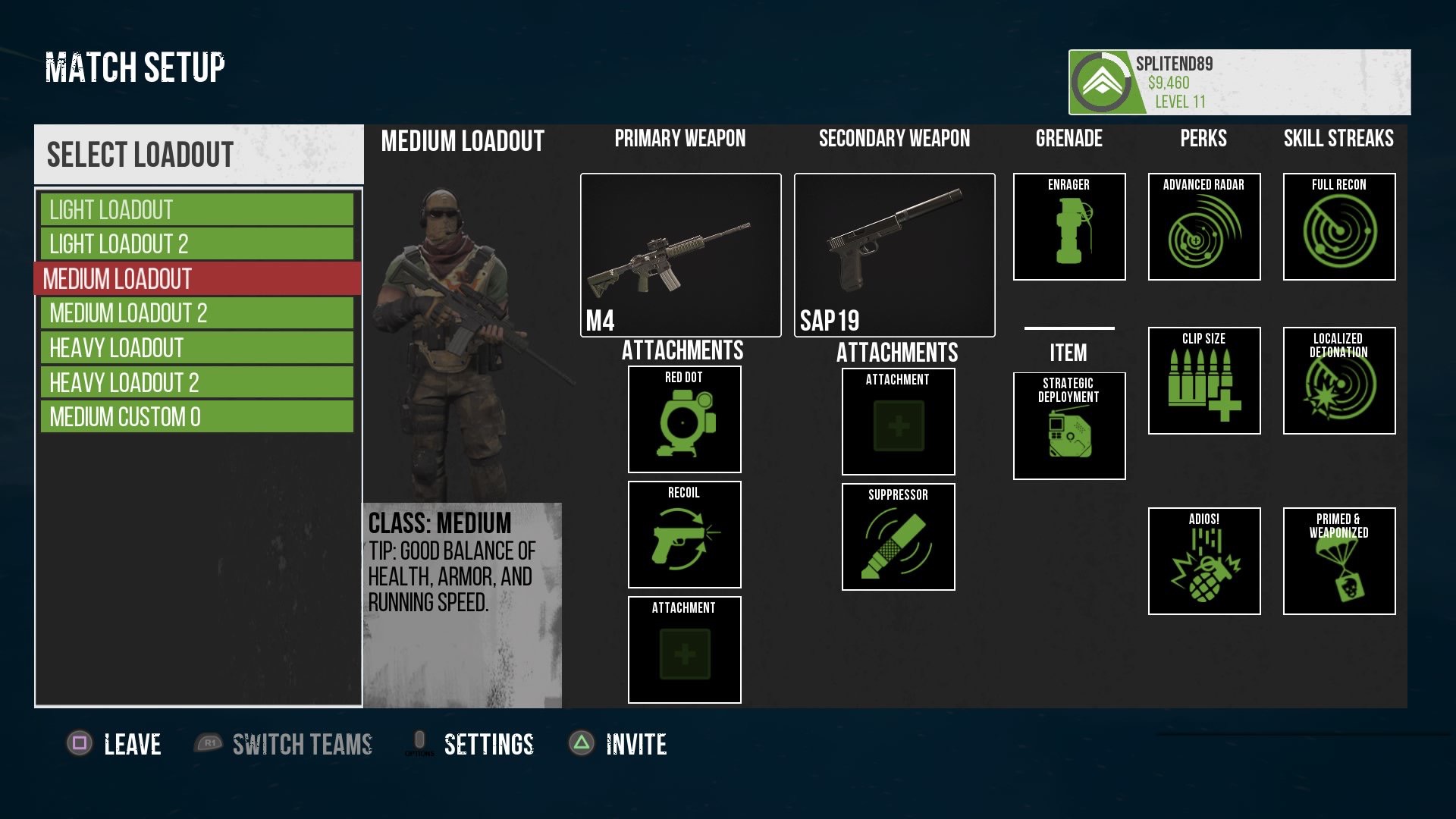 Dead Alliance is one of the most interesting titles I have played. I started gaming this title without thinking I would be fond of it. But as round after round went on, my enjoyment level just kept going up. While Dead Alliance might still have improvements to make, the concept of utilizing zombies as an additional weapon is just cool. Some things need refining, like the visuals, but the core idea of Dead Alliance works really well!